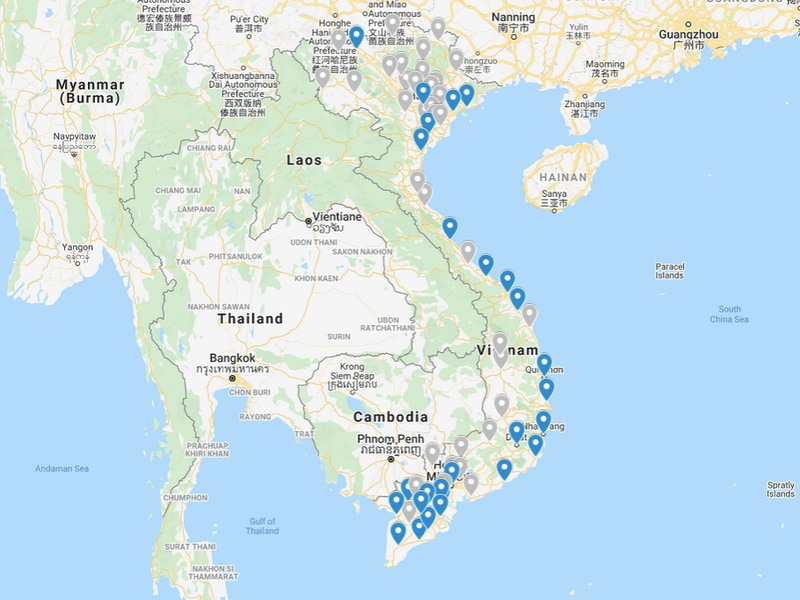 Having been based in Vietnam off and on for a number of years, I have been to most of the main tourist hot spots in that time. When the world went crazy in March 2020, I came back to Vietnam knowing that travel international travel was not going to get back to normal anytime soon. It turned out though that Vietnam had been able to contain the virus better than most countries, thus domestic travel was able to get back to normal.

With no prospect of international travel, I’ve been making the most of my time here by visiting new places. Sometimes I might just look on the map and fly to a new airport, then travel somewhere from there. I flew to Tuy Hoa, then got a bus to Vinh Hoa Beach. 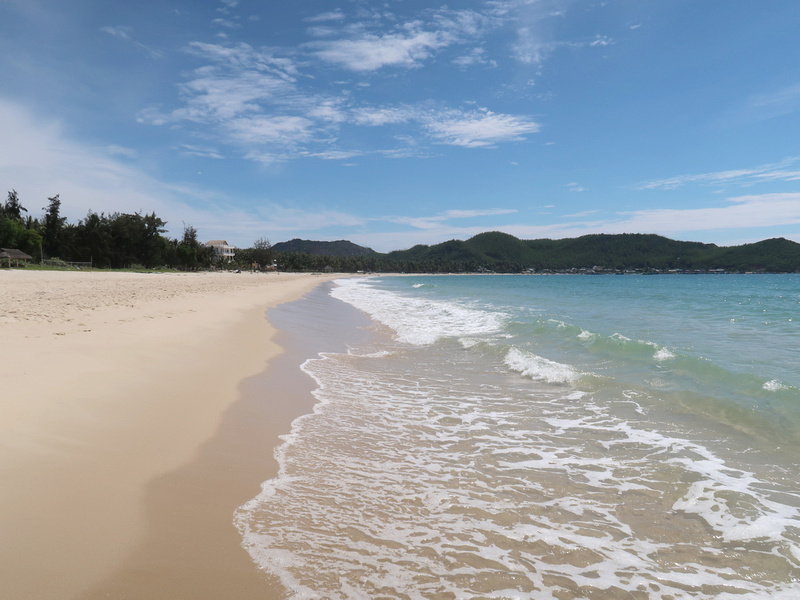 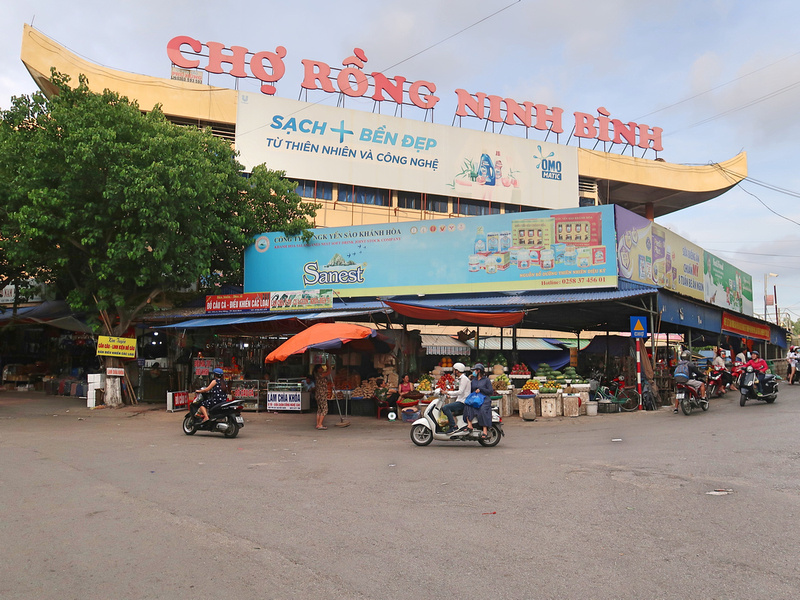 There are 58 provinces and 5 municipalities in Vietnam, so a total of 63 geographical entities to visit. Here is a progress report of the capital cities of every province in Vietnam that I have visited.

Blue pins denote provincial capitals that I have visited.

[Map of Provinces of Vietnam.]

I’ve put this map together to track how my travels in Vietnam are faring, but at the end of the day, I’m not in a hurry to finish it. I don’t win a prize, and it doesn’t make me a better traveller. Once international travel resumes I will be back to travelling the world again, so I will return to this list when making future Vietnam travel plans.

I have a similar list for the states of the US, where so far I’ve been to 20 US states and Washington, D.C. I’m not itching to finish this list either. Instead, I use it to work out where to go next time I am there. That is the same for any place I visit frequently. For example, when I visit Bangkok (which is usually a few times a year), I will look to visit a new place during that trip.

There are no rules for travel, but for the sake of this quest, I have set myself my own basic rules. I have to stay one night in the capital of each province, and I have to blog about the capital. I’ve been through some provinces on the way to others, so that obviously doesn’t count. I’ve also spent the night in other cities that weren’t capitals, so I need to go back to the provincial capital.

Choosing where to go

When looking at the map of provinces of Vietnam in Wikipedia, it’s an overwhelming patchwork of places. Where do you start?! 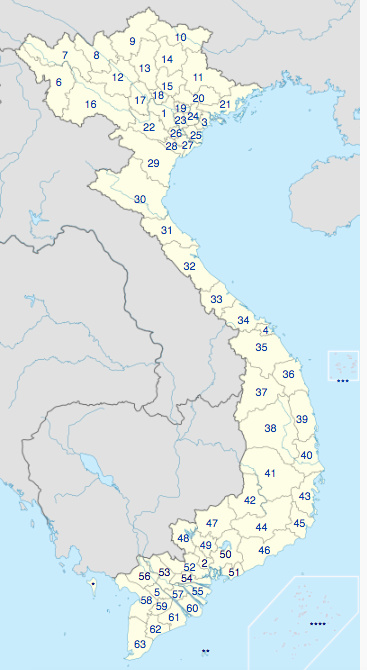 The quest suddenly becomes more reasonable when looking at this regional map of Vietnam with its soothing colour palette. 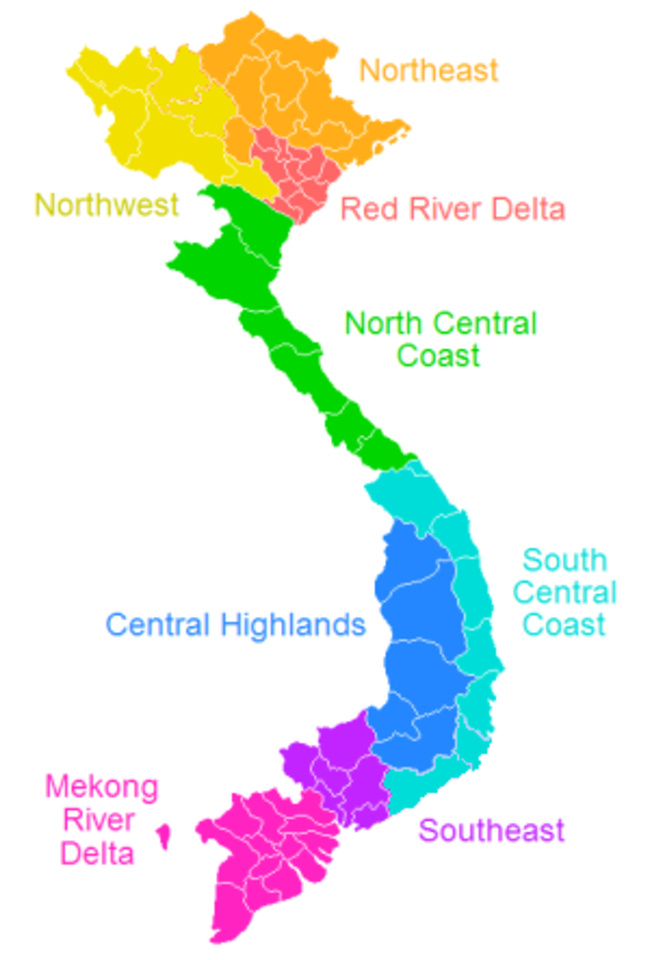 [Regions of Vietnam (via Wikipedia).]

Breaking it down into regions is a more helpful guide, especially when considering the different seasons. While the northern regions can be freezing cold in the northern winter (Dec-Jan-Feb), those months are the perfect dry season months in the Mekong Delta.

For the provinces around the Red River Delta, I might save those for my much-talked-about Hanoi epoch. I keep threatening to spend a few months there to really get to know the city, but I can’t seem to drag my arse out of Saigon, so we shall see. The mountainous Northeast and Northwest regions would also be more attainable if I was based in Hanoi.

Looking at the map by region, I’m embarrassed to see that I have not visited ANY of the capitals in the Southeast Region (which is mostly the Greater Ho Chi Minh City Metropolitan Area). I’m so busy sipping lattes in the cafes of Saigon that I have neglected the neighbouring provinces that make Ho Chi Minh City greater. I know these provinces (and those in the Red River Delta) are famous for being factory lands, but there is always something to see beyond the industrial zones.

I have been to Ba Ria-Vung Tau province but not Ba Ria. Most people (like myself) only go to Vung Tau.

I have been to Dong Thap but not Cao Lanh. Sa Dec is the most well-known city in this province, and it didn’t occur to me that Sa Dec wasn’t the capital until after I had planned the trip.

I don’t blog about every place I’ve been to, so I was surprised to find that I have blogged about most places.

I have been to Rach Gia but didn’t blog about it. I want to go back there to catch a ferry to another island.

I have been to Tam Ky but didn’t blog about it. It rained for the two days I was there, so I want to give it another go. Tam Ky is the capital of Quang Nam, which is where Hoi An is. If you are planning to visit every province without visiting the capital, then you have probably already locked in Quang Nam. I’ve been to Hoi An so many times by now that I probably could have visited another 10 provinces in that same amount of time, but I regret nothing. 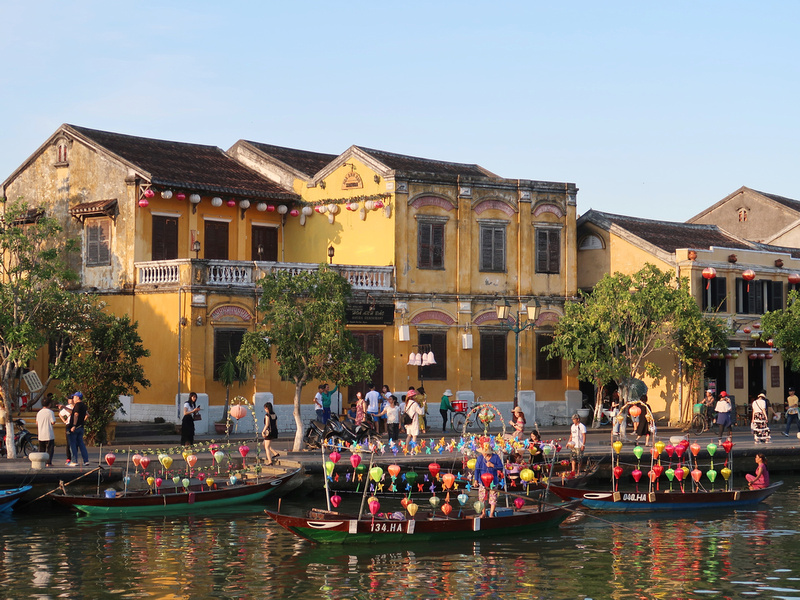 [Visit Hoi An again, or visit a new province?]

I have been to Vinh Long but not blogged about it. There are more things to see there nearby, so I can incorporate that into another trip to the other Mekong capitals. 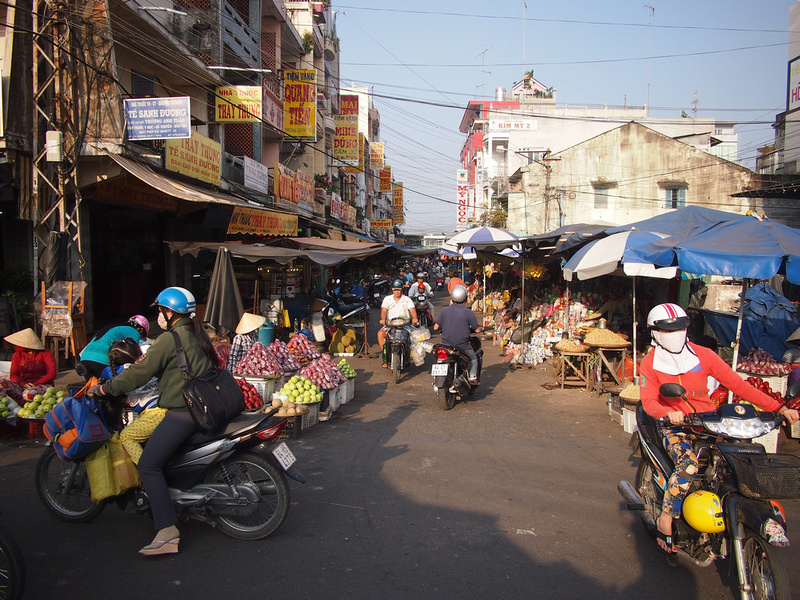 [Looks like I talked myself into going back to Vinh Long.]

I have been to Dong Hoi and blogged about it, but I didn’t spend the night there. My cousin lives nearby in Phong Nha, and he keeps asking me when I am coming back. It’s not a hard decision to make as it’s a beautiful place, so I may go back to report on the beach resorts of Dong Hoi.

Here are all the provincial capitals grouped into regions. I’ve linked to blog posts about each capital.