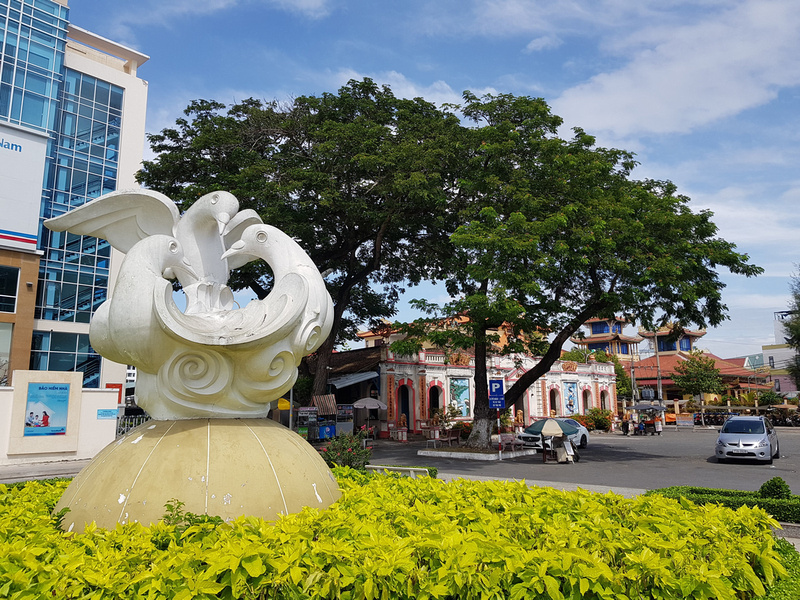 Spend time in Southern Vietnam and you’ll soon notice the prevalence of Ben Tre coconuts. This provincial variety is so well known that vendors advertise coconuts as being from Ben Tre to let you know that you are getting a premium coconut. 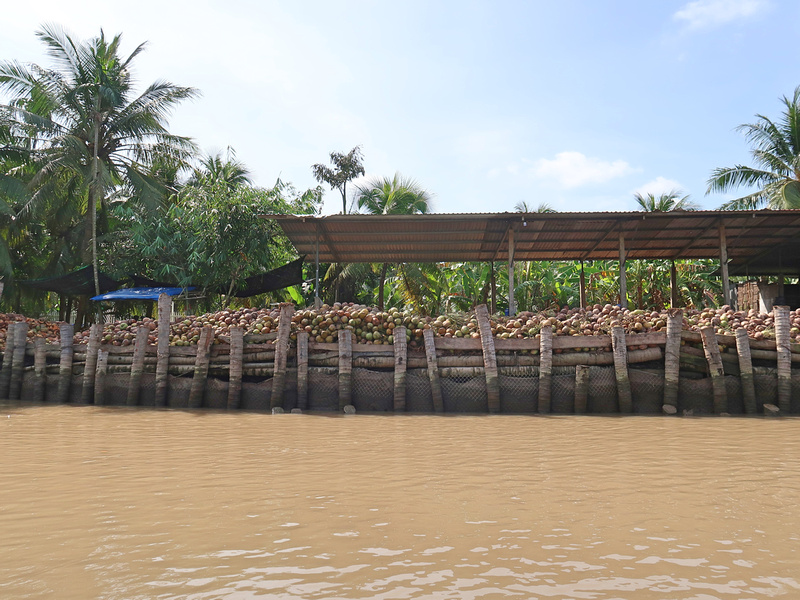 Maybe the Ben Tre Coconut Marketing Authority have got to me, but I do think that Ben Tre coconuts are up there among the best in the world. I recall having coconuts in India and Malaysia and saying to myself that these aren’t as good as the Ben Tre variety. 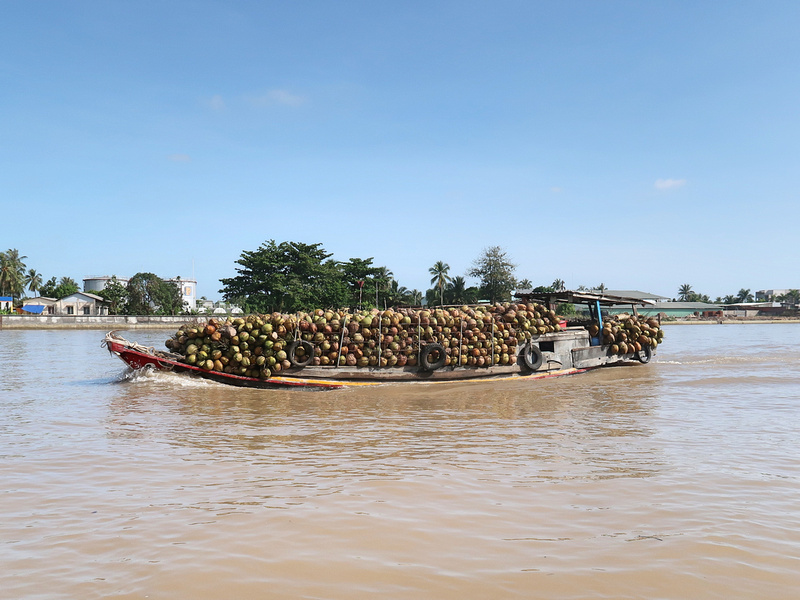 So for me the first thing I think about when I think of Ben Tre are coconuts. I say this because it shows how far I’ve come in my association with places in Vietnam. If you’ve never been to Vietnam you would have no reason to have heard of Ben Tre, but you may know a quote associated with the city.

One of the fiercest battles of the Tet Offensive was fought here in 1968, and in the aftermath an unidentified US Major was quoted as saying “It became necessary to destroy the town to save it.”

Knowing this quote and backstory, I wasn’t expecting too much of Ben Tre. I was staying nearby at a farm stay and I had considered not stopping there at all. I’m glad I did though as it turned out to be more interesting than I thought. 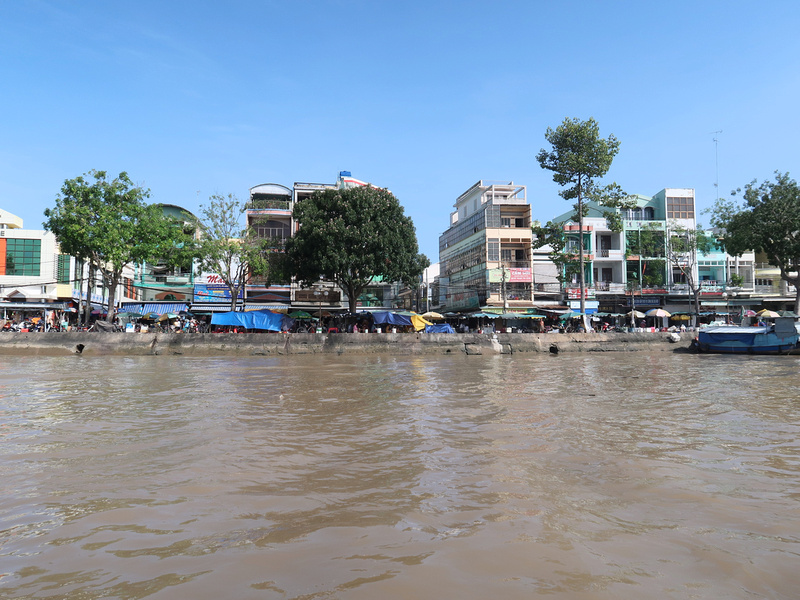 Ben Tre is close enough to Saigon to make it a day trip for those wishing to visit the Mekong. Most day trippers end up in My Tho (as I have done previously), and then the waterways of Ben Tre Province. If you have seen photos of tourists wearing a conical hat in a small canal, this is in Ben Tre Province.

The city of Ben Tre only gets a trickle of visitors compared to My Tho. I saw a few tourists here and there, and there were some cyclists that looked like they came from Saigon (city folk in lycra).

The Mekong is a cyclists delight with its flat terrain and rural laneways with less traffic. At the farm stay I got a bicycle and rode into town from there. I can see why cycling in the Mekong region is so appealing. 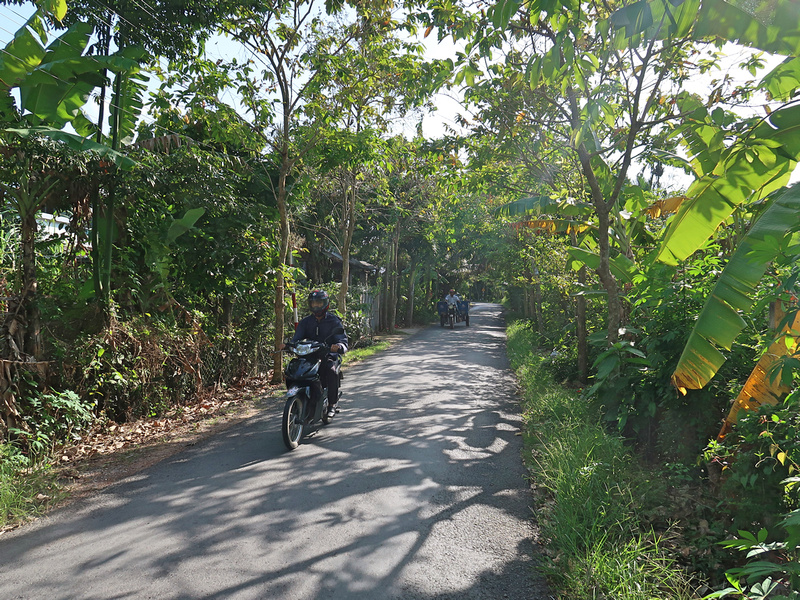 As with any city in Vietnam I always gravitate towards the central market when visiting for the first time. 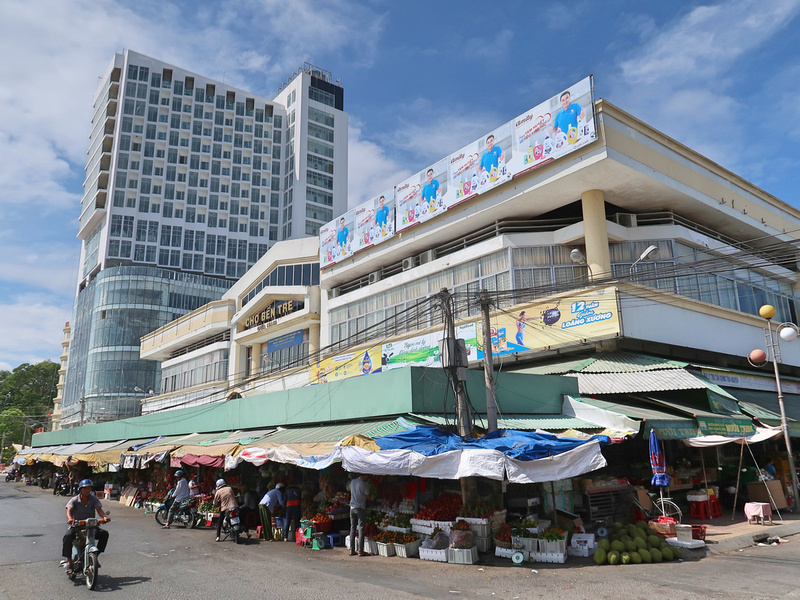 Having just got off the bus from Saigon and leaving my bag at the farm stay, the market was my first interaction with the people of Ben Tre. The friendly vendors in the market made stopping in this provincial city worth it. 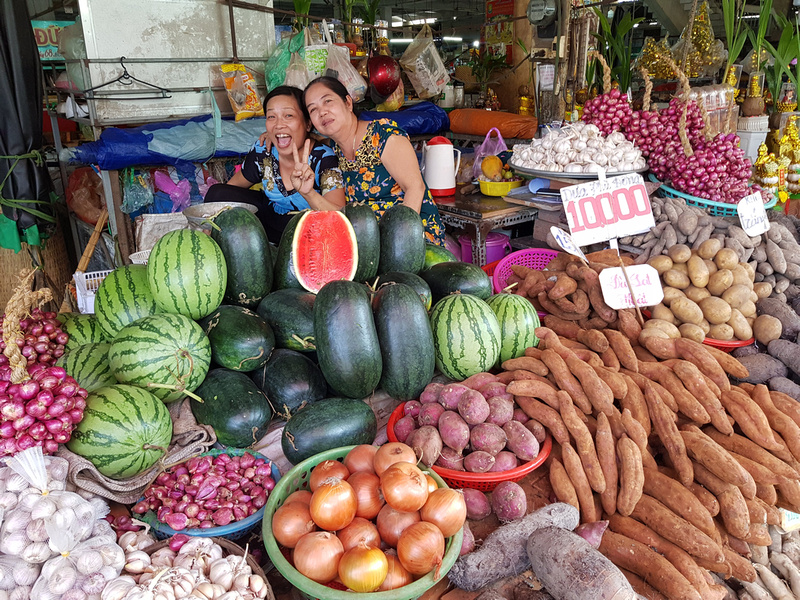 Market displays are an art form in itself. Setting up these displays every day is like raking a zen garden, where you know that the beautiful creation you make is impermanent. 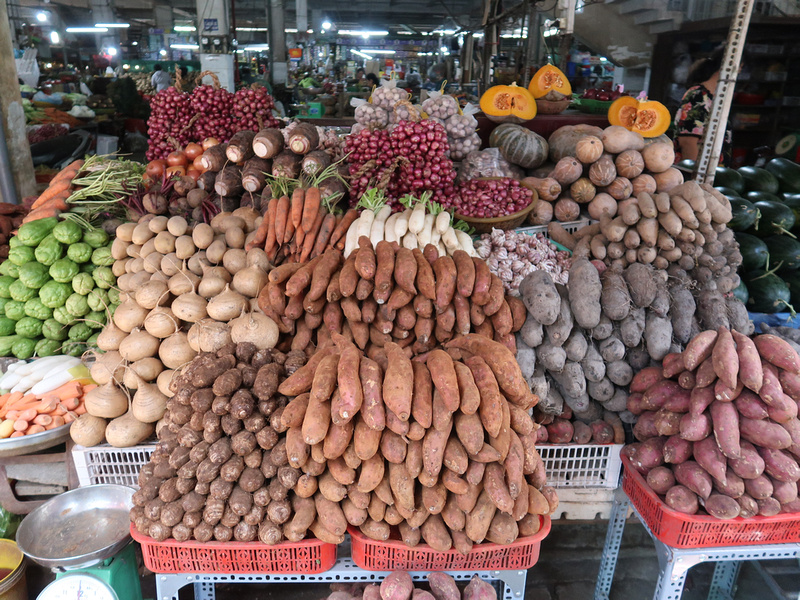 Despite the damage from the war there are a few nice old buildings that remain. Dinh An Hoi is probably the architectural highlight of the city. 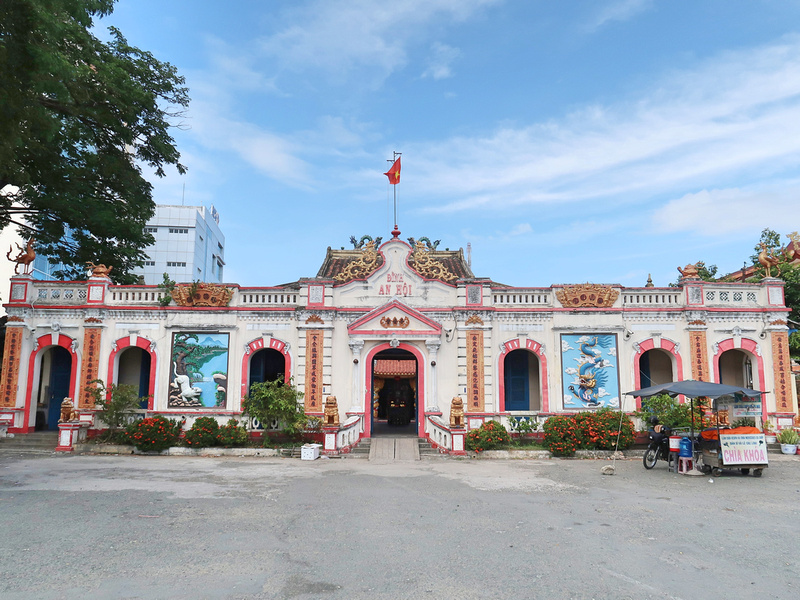 And near that is the Vien Minh pagoda. 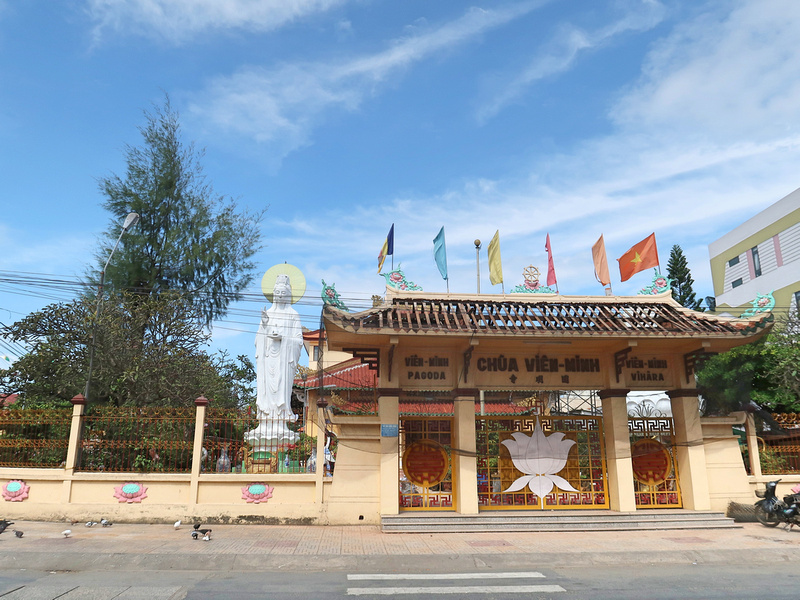 For the most part though the city is the usual mashup of loud and uncoordinated styles so common in Vietnam. 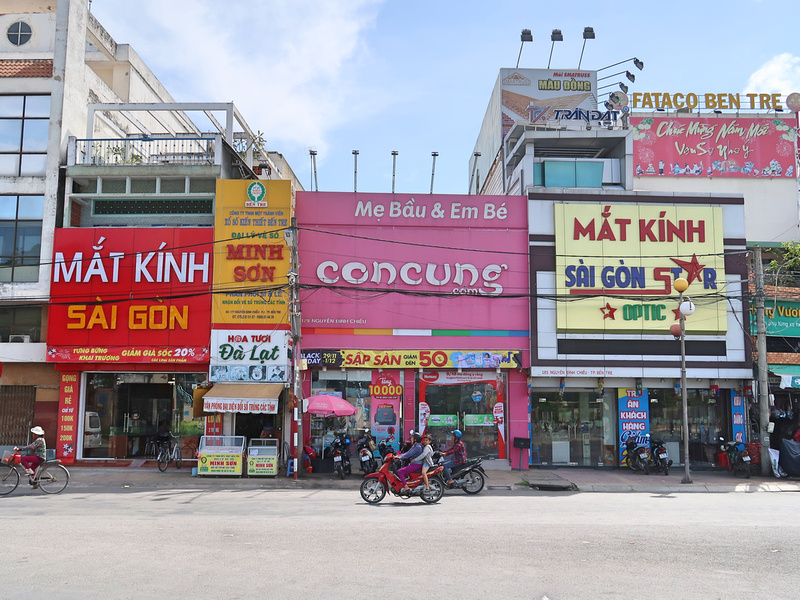 Visiting the provinces is a reminder of what the big cities of Vietnam were like ten years ago. It was only in the last decade that the likes of Starbucks, McDonald’s, and 7-Eleven arrived in Vietnam. Apart from Jollibee from the Philippines I didn’t see any other international chain stores here. 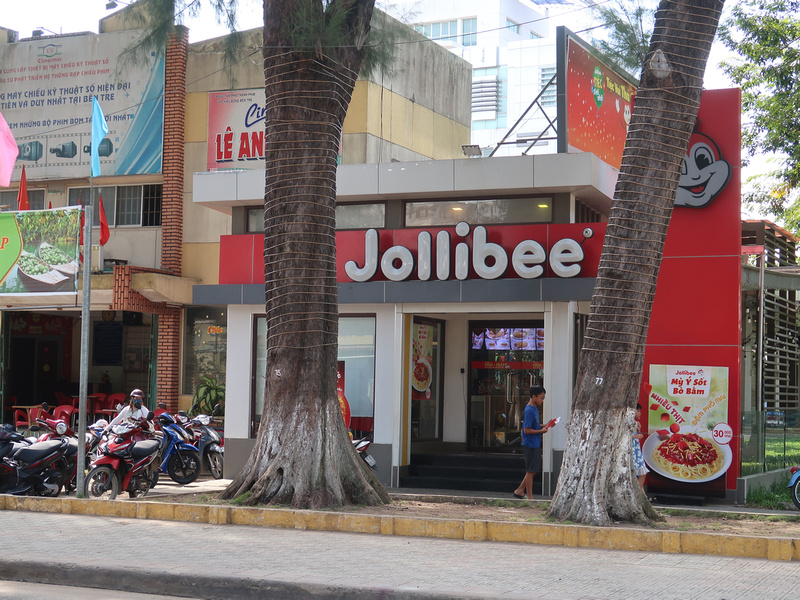 Here and there I saw remnants of what might have once been a charming colonial riverside trading town. I nearly missed this old shopfront hiding in plain sight. 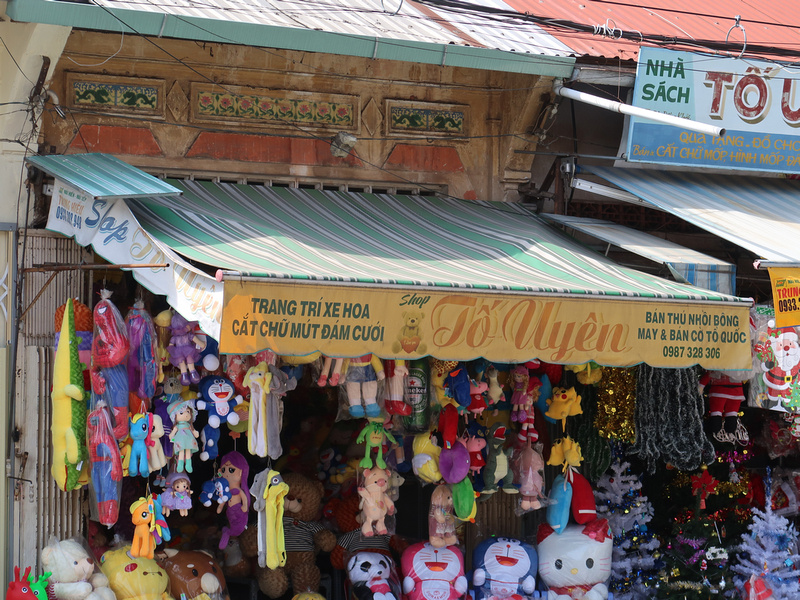 I went down another alley and saw this old building that would have looked great in a street filled with similar buildings. 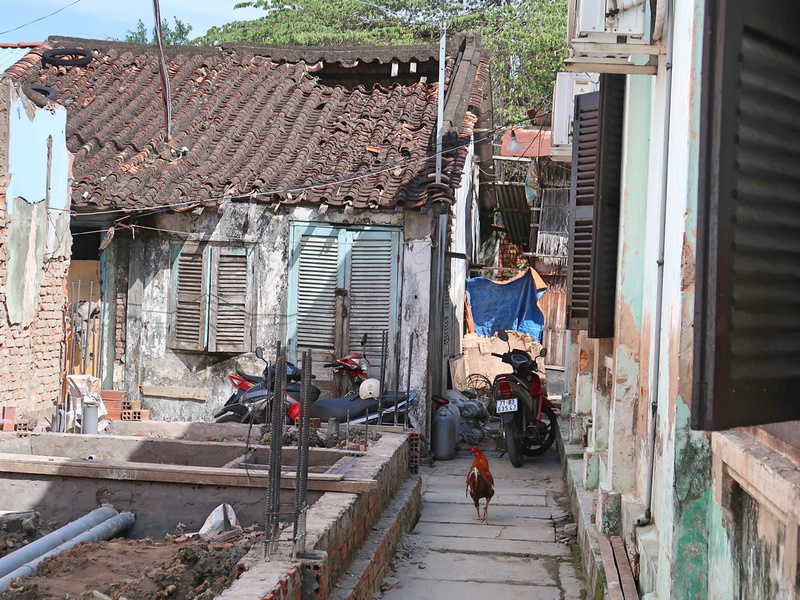 The Dong Khoi Movement of the southern provinces began in Kien Hoa Province (now Ben Tre Province) in 1960 when the Viet Cong led an uprising against the government of South Vietnam. One of the leaders was Madame Nguyen Thi Dinh, who would later go on to become the first female general of Vietnam People’s Army.

The monument draws you in with its oversized sculptures of heroes in the chunky Soviet style. Behind the main statue is a wall depicting images of the Dong Khoi heroes. What is remarkable about this is that – apart from a couple of soldiers at the end – they are all women. 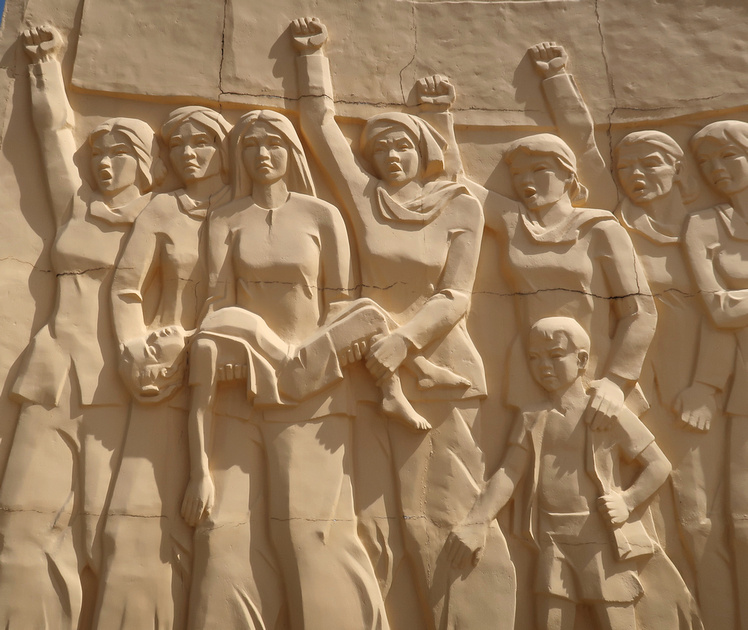 In my travels around Vietnam I’ve noticed more monuments dedicated to women freedom fighters than any other country I can think of. From General Le Chan in Haiphong, to Mother Suot in Dong Hoi, and every city has a street named after the two Trung sisters, Nguyen Thi Minh Khai, and Vo Thi Sau.

Dinh was one of the leaders of the all-female resistance group that Ho Chi Minh named the “Long Hair Army”. 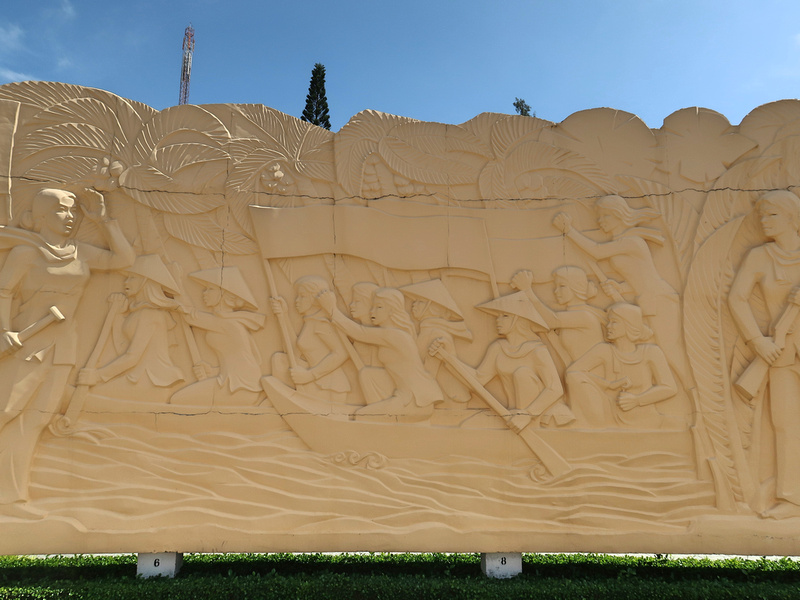 On the riverfront is the Viet-Uc Hotel (Vietnam-Australia Hotel). It has an Australian proprietor, but it got me thinking that there must be Australian ex-servicemen who visit Ben Tre as well. Australian forces were based in Vung Tau, but they were active in the Mekong Delta. 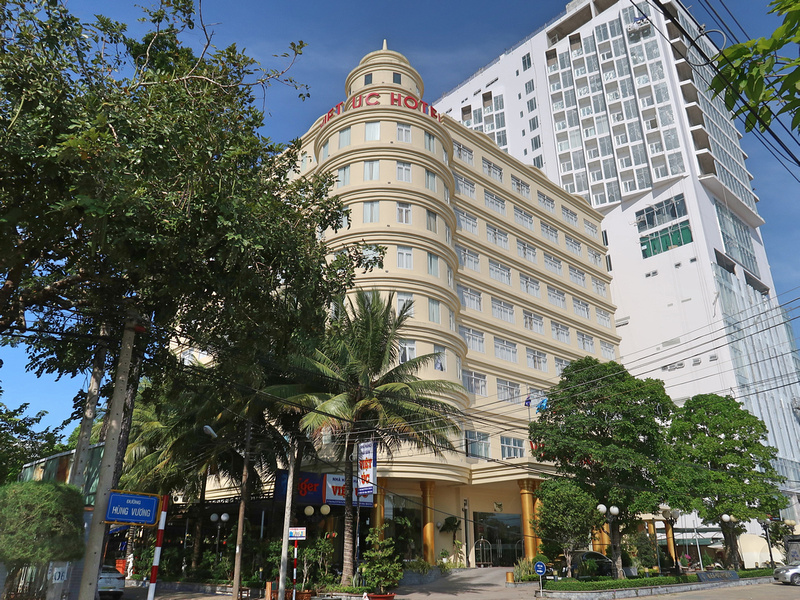 Nearby is the museum of Ben Tre Province, which happens to be in the best preserved colonial building in Ben Tre. 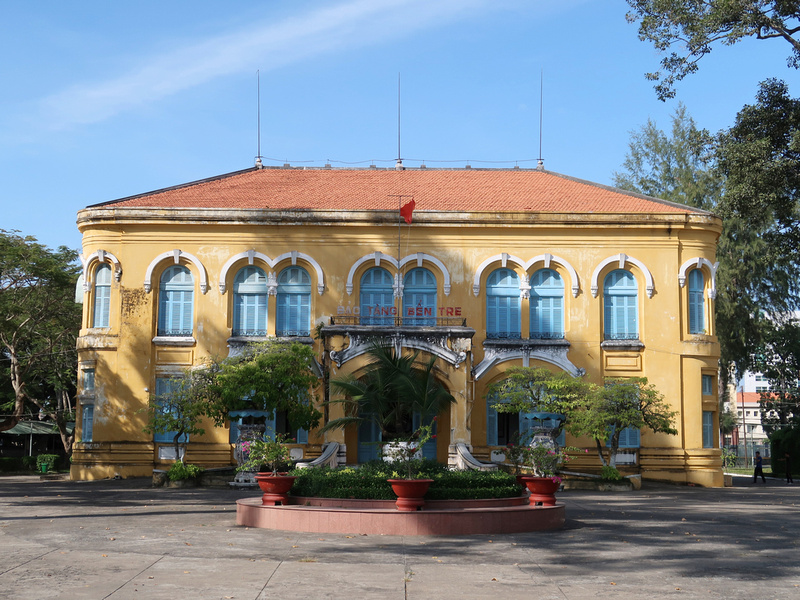 On Google Maps I saw a little lake in the middle of the town that was ringed with cafes. Finding a geographical feature with a cafe icon next to it is one of the ways I plan my travels. Lake Truc Giang turned out to have delightful tree-lined streets. 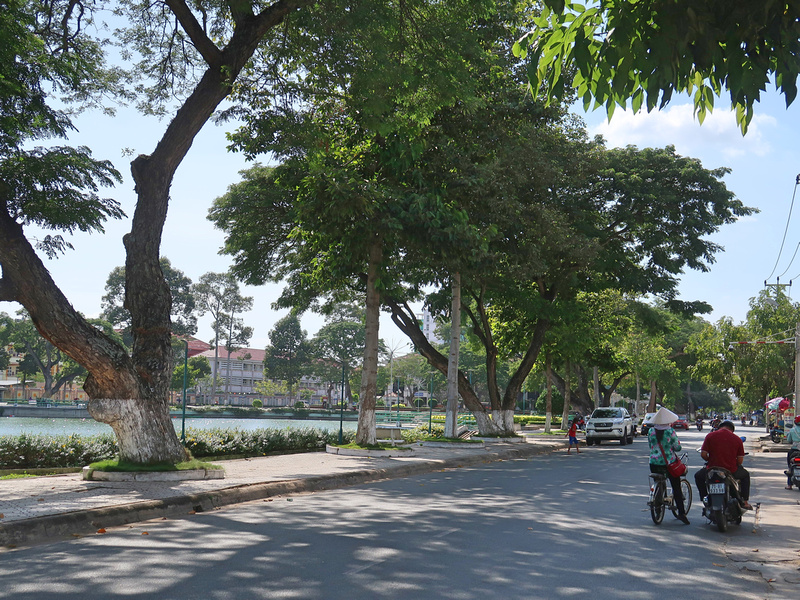 What I love about Vietnamese cafes is that you get a bottomless glass of iced tea with your iced coffee. I spent half an hour here relaxing and rehydrating after being out in the afternoon heat. Free iced tea is the pinnacle of cafe civilisation, and I miss this extra whenever I go to cafes around the world. Vietnamese cafes have ruined me. 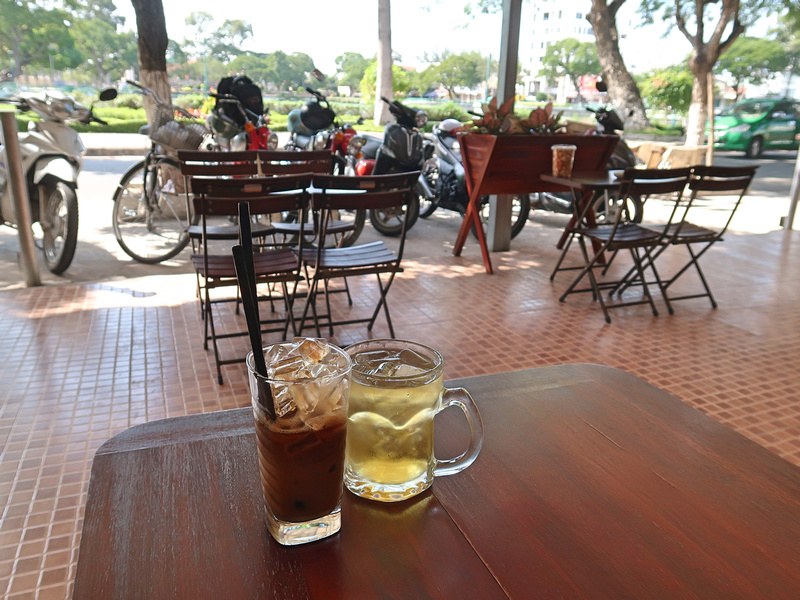 I then went to another cafe on the lake is it looked like it might be the coolest cafe in Ben Tre. I had no need for another coffee, but who knows when I’ll be in Ben Tre again. There were some new cafes being built along the lake here, so this might be a cafe hotspot in a few years. 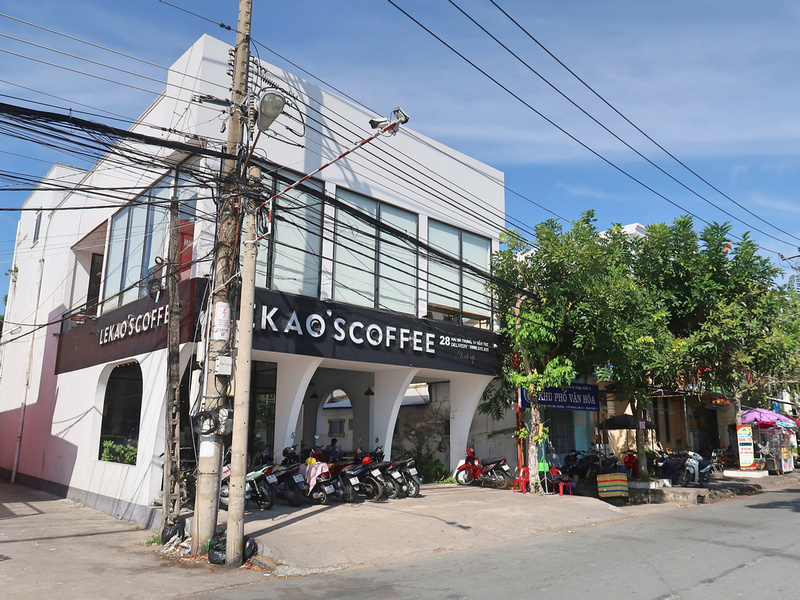 I didn’t go here, but I though that Win Win Cafe is a great name for a Vietnamese cafe (not pronounced Nuh-guy-un Nuh-guy-un Cafe). 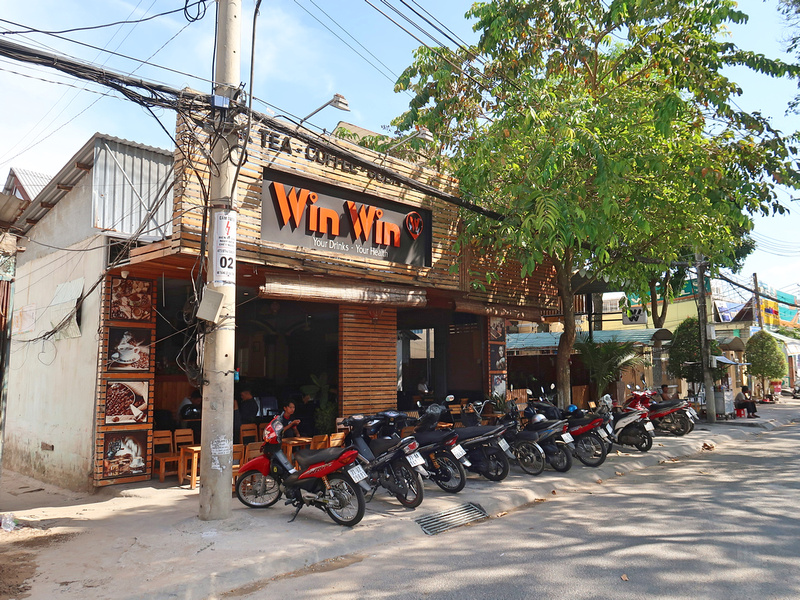 I had arrived after lunch on a Saturday, and I discovered that most places were already shut by the time I got there. As my friend in Saigon wrote, never go for lunch at 1.35pm because lunchtime is OVER. I did find an amazing banh mi at Banh Mi Tan Loc on Phan Ngoc Tong. It was so good I had two. Or maybe it was so late and I was so hungry. Either way, I had no regrets about having two banh mi’s 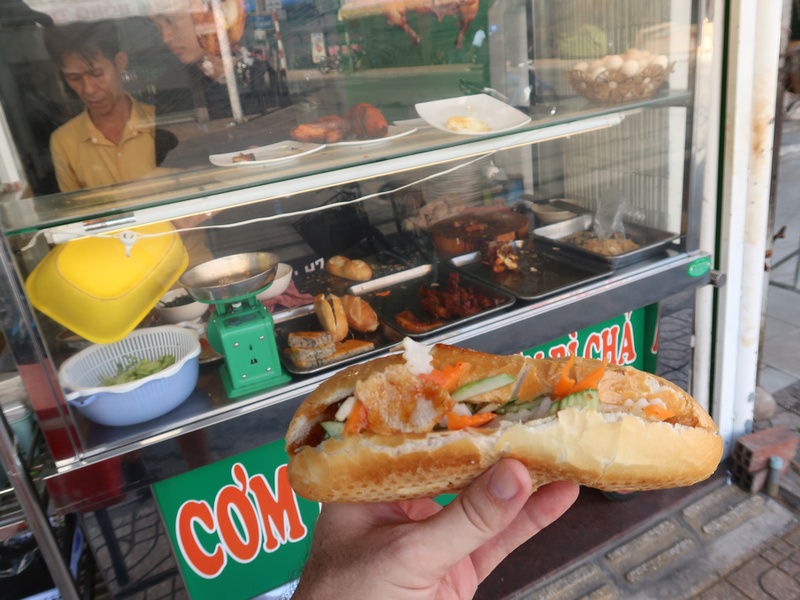 So that was my day in Ben Tre. It’s not the sort of place that would rank in the top 20 places to visit in Vietnam, but sometimes these unassuming provincial cities are a good counterpoint for visiting the tourist hotspots.

Where to stay in Ben Tre 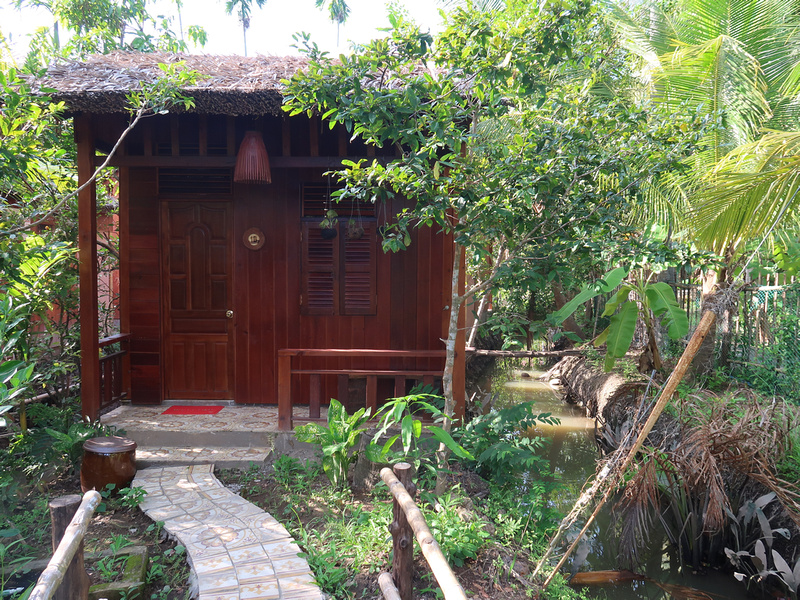 I stayed outside of the city centre at the Ben Tre Farm Stay. This was a great way to experience rural Mekong life while being within reach of town life. 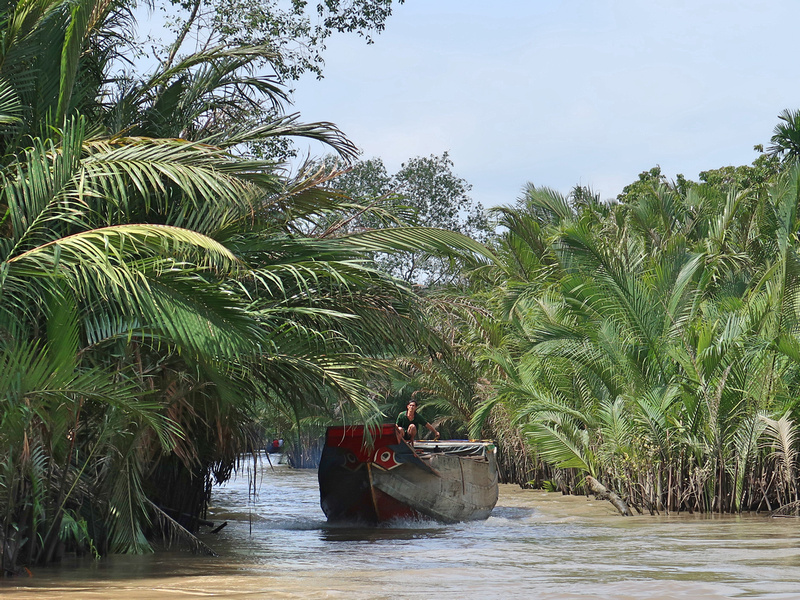 Many of the Mekong day trips from Saigon come to Ben Tre province. If you are staying in Ben Tre you can do the same things here but a more leisurely pace. I did a 3-hour tour organised by my accommodation, and I did it mainly for the boat ride through the canals and rivers. You will stop at different industries such as a brick-making facility and coconut candy makers. Be alert when you go the the candy factories, as they are like drug dealers who give you a free sample, and then you go and buy bags of the stuff. 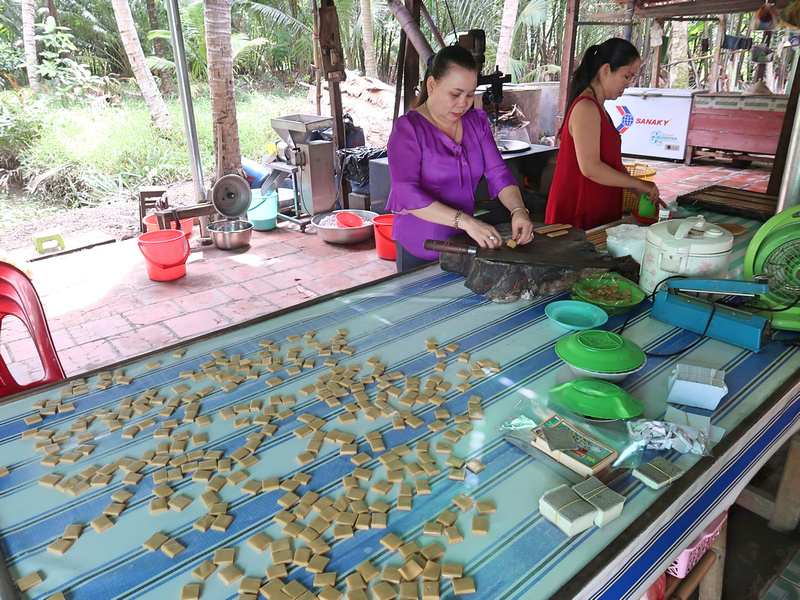 The tour also included some cycling around different sites. 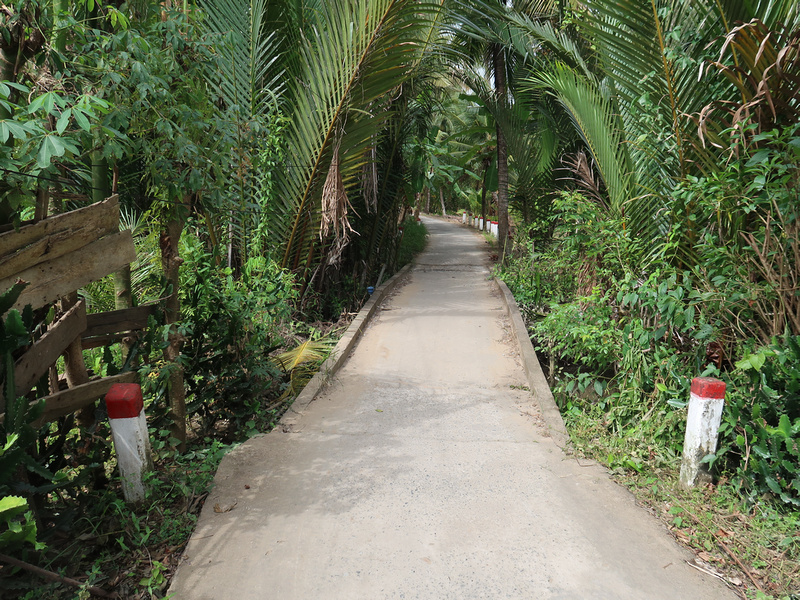 How to get to Ben Tre

I got the bus from Mien Tay (Western Station) in Saigon. The FUTA bus stops in Ben Tre on the Saigon to Tra Vinh bus service, and it takes 1 hour and 45 minutes. 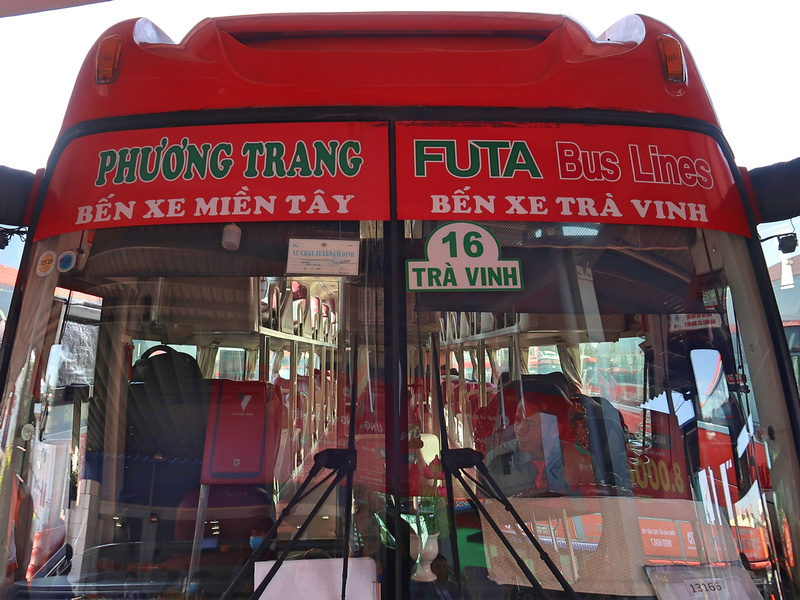 FUTA also offer a free shuttle service, so they will deliver you to your hotel from the bus station. 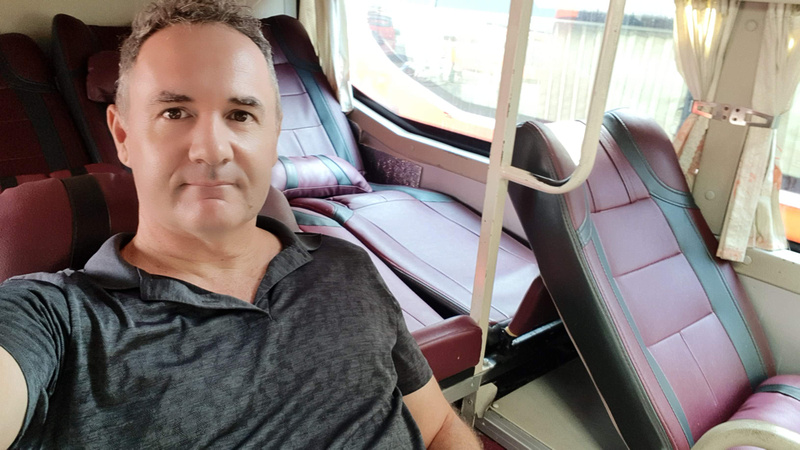