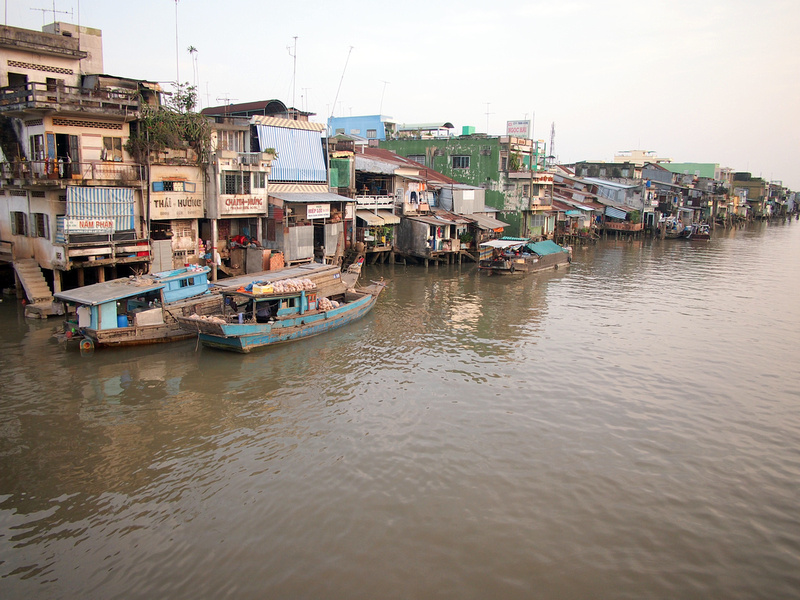 After spending so much time in Saigon I figured it was time to see more of the country before going on my next trip. I’ve been to the Mekong Delta before but there is so much to see, so I made a plan to travel through the Delta by bus, get the ferry to Phu Quoc, then fly back to Saigon.

My Tho is only two hours away from Saigon which makes it the default day trip destination for the Mekong Delta. The biggest hassle is getting out of the city. You will spend half of those two hours getting out of Saigon. Another hassle is that buses to the south of Vietnam depart from bus stations in the outer districts of Saigon, so I opted to get on one of the tour buses that leave from the backpacker area (Pham Ngu Lau).

My day tour to My Tho cost 140,000 VND (about $7 USD) and covered bus transport, boat trips, and lunch. I figured that is a cheap and convenient way to get to My Tho while getting to see some of the touristy things I haven’t done before. I let them know that I will be jumping off the tour when it ends in My Tho.

The tour version of My Tho

The bus trip to My Tho takes about 2 hours. After getting out of the greater Ho Chi Minh City area we made the obligatory toilet stop at a handicrafts studio. 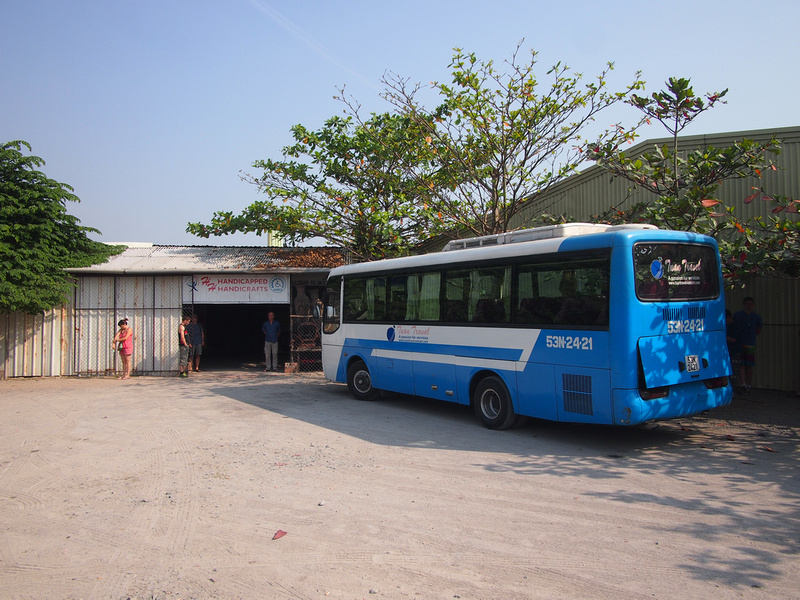 In My Tho we transferred straight from the bus to a waiting boat at the pier. Here we cruised on the Tien River (the northern branch of the Mekong River) towards our activities for the day. The first stop on the tour is to a coconut candy factory. This was a clever move by the tour people as it was an hour before lunch. I was getting hungry at this point so I couldn’t resist the free samples that were going around. 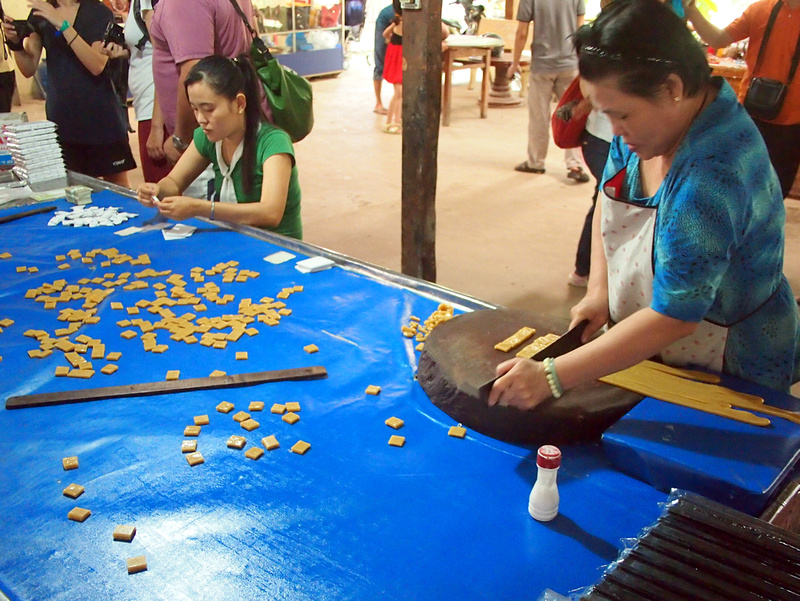 I thought that having a few free samples might tide me over until lunch. Instead, it uncorked a crazy sugar craving and I ended up buying a packet. This is how drug dealers get their first clients. I made an unhealthy dent in the packet and immediately felt like a terrible human being. The theory of not doing your supermarket shopping on an empty stomach also applies to visiting coconut candy factories.

Each packet was a bargain at 30,000 VND ($1.50) and at least they are made with few ingredients. I’m now wishing I bought more packets and a little relieved I didn’t. 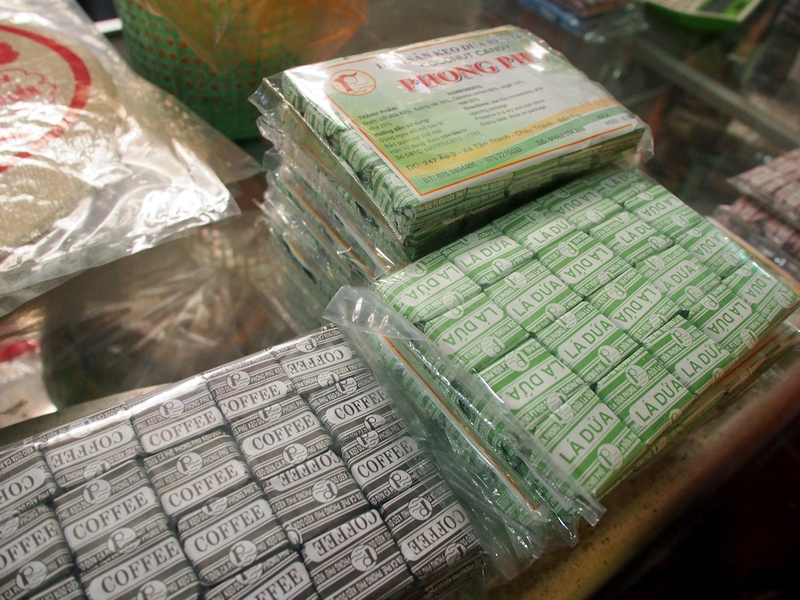 Lunch consisted of the blandest meal I’ve ever eaten in Vietnam. I was so hungry I forgot to take a photo. It was rice, a few steamed vegetables and a small piece of pork. I ate it for sustenance (and to stay the sugar shakes) but there was no flavour. It was the first time I’ve eaten grilled pork in Vietnam that didn’t come with fish sauce and chilli. I didn’t know it was legal to serve pork without fish sauce in Vietnam.

I’m assuming that being a free lunch for the tour they make it as bland as possible to cater for a general population of western tourists. If you are a tourist travelling around Vietnam and are subsisting on tour meals then you are getting the wrong impression of Vietnam.

After lunch we got the boat to another island where we were taken to a honey farm. A sample of honey tea was included at tea break, and I would have bought that as well if I had a kitchen to go back to (see the previous reference about drug dealers giving free samples). 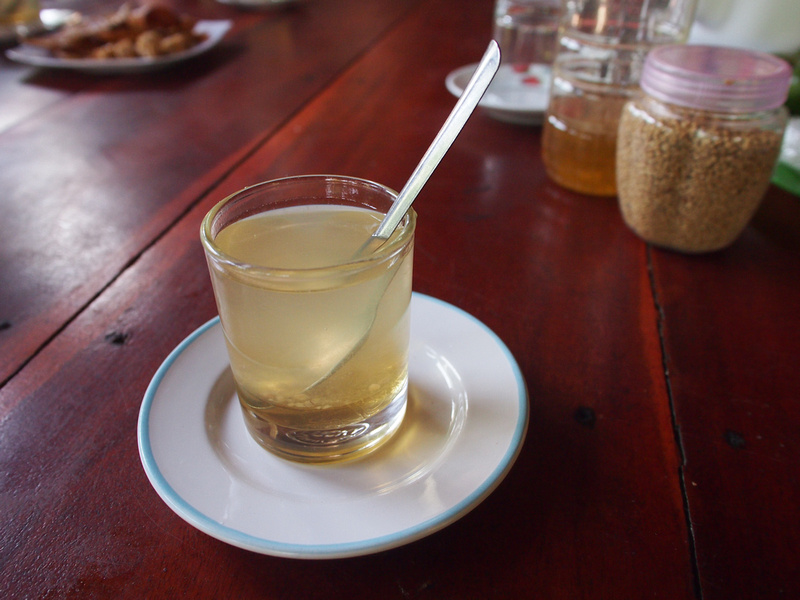 From the tea break to a snake farm where you could hold a python (why do they always have this on such day tours?) and a visit to a lady making coconut rice paper.

Another break, this time for tropical fruit break while listening to some traditional music. 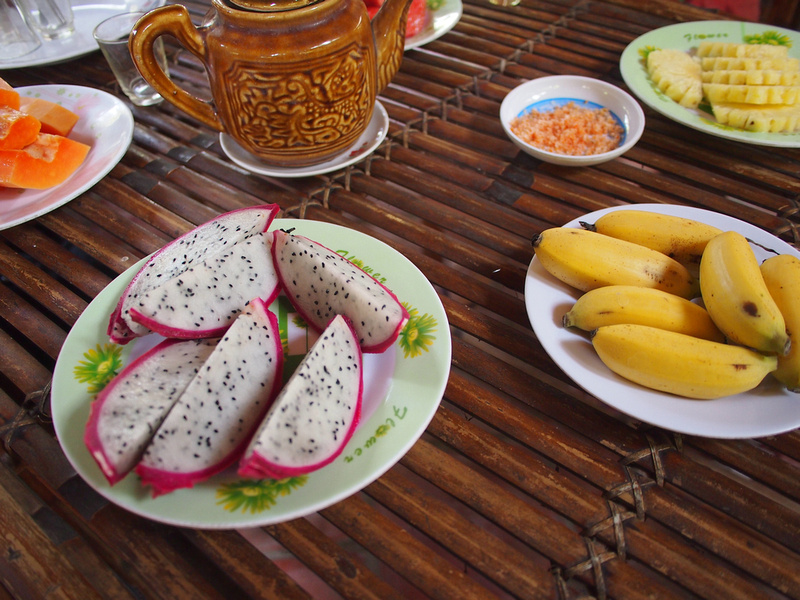 The last part of the day was getting on a little boat and being paddled down a canal. I’ve seen the pictures of people travelling to the delta where everyone is wearing the conical hats. This is where it happens, though for some reason ours was the only boat without hats. 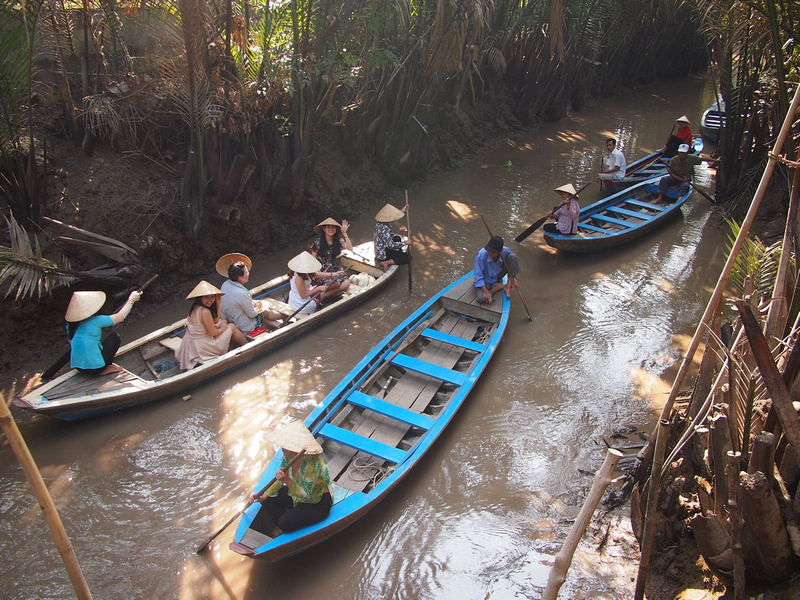 The canal was indeed a scenic trip and the boat paddlers make it seem so effortless. I presume the canals were used by farmers back in the day to transport produce to the markets. Now it is all sightseeing boats.

With so many boats in the canal filled with patrons from the many other tour buses, I felt like I was on Vietnams version of Splash Mountain. We got back on our boat and made our way across the river. By 3pm our tour had ended and I collected my bag from the bus to start my independent tour of My Tho.

The independent version of My Tho

My Tho is an unremarkable city, so I wouldn’t blame anyone for not coming here. For me though, I like to see what makes provincial cities tick. I like to explore markets and lanes, and I think that just about anywhere is interesting for a day.

My Tho has a big market so that is where I began my explorations. 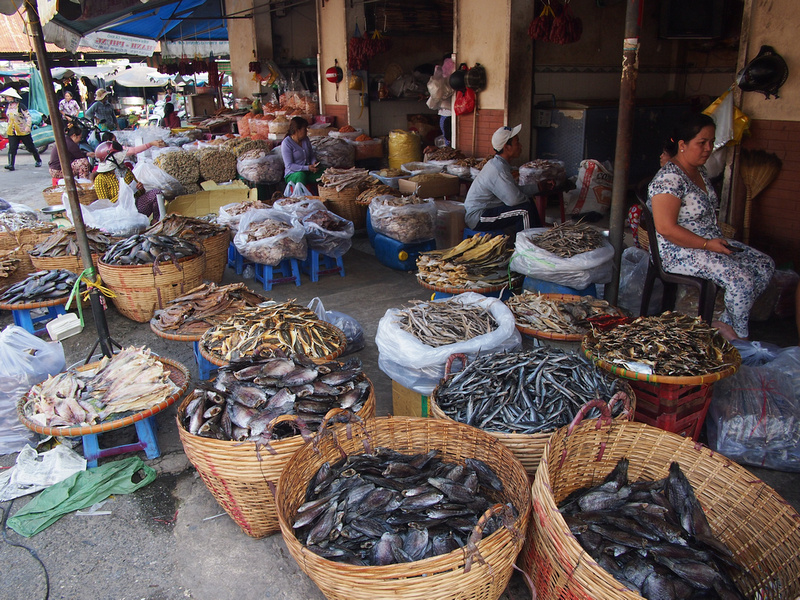 Along the way, I got lots of hellos from kids (and adults) who were probably wondering what I was doing there. 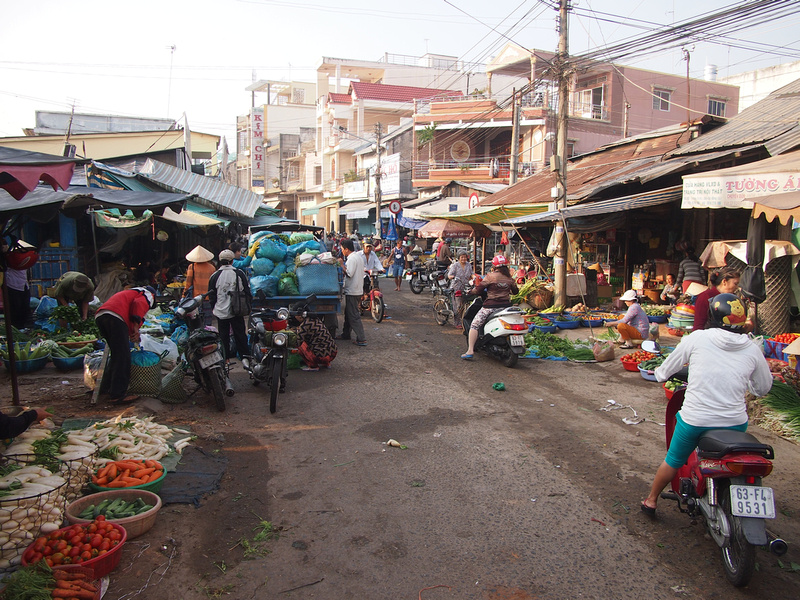 I walked beyond the market to a Cao Dai temple. Caodaism is a religion formed in southern Vietnam and throughout the delta, you will see these magnificent temples that look like a catholic church decorated like a Chinese temple.

I enjoyed walking along the canals and observing life on the water. 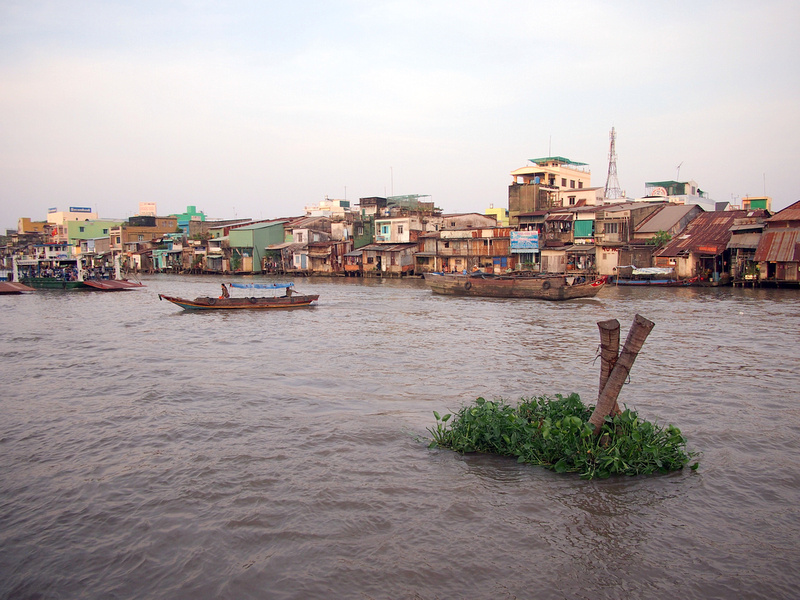 My Tho was an important city in French colonial times, though now there is little left of that era. Walking around you can find a few hints of colonial times but they’re few and far between. After a disappointing lunch and disgracing myself by eating too many coconut candies, it was time to redeem myself in the food department. I didn’t research if there was a local speciality or recommended place to eat, so I just wandered until I found something appealing.

After walking through the back streets along the canal I emerged at a dusty side road where I found a busy food stall. 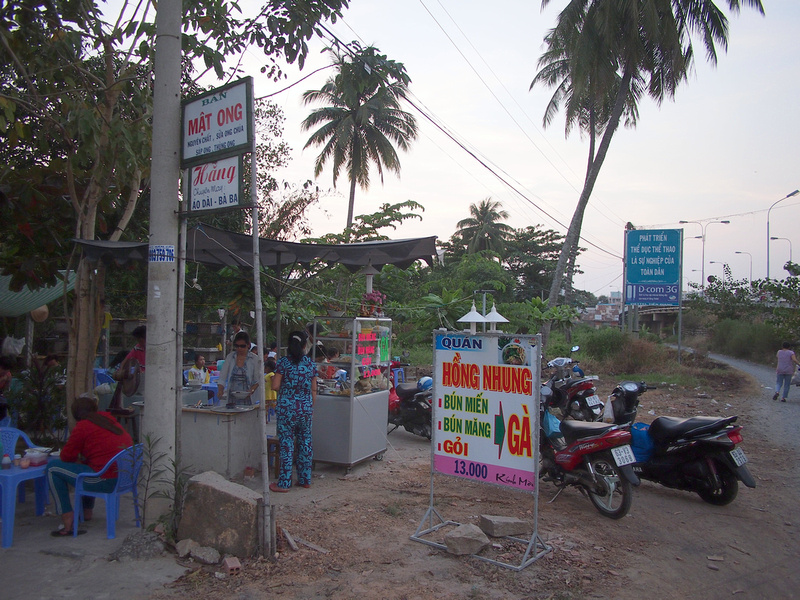 On offer was mien ga; a glass noodle soup with chicken, bamboo shoots, and (in this case) a giant blood cube. This was 13,000 VND (60c USD) which is less than half the price you would pay in Saigon (I know, I’m totally getting ripped off with my $1.50 bowls of soup in Saigon). This alone was worth my wanders. 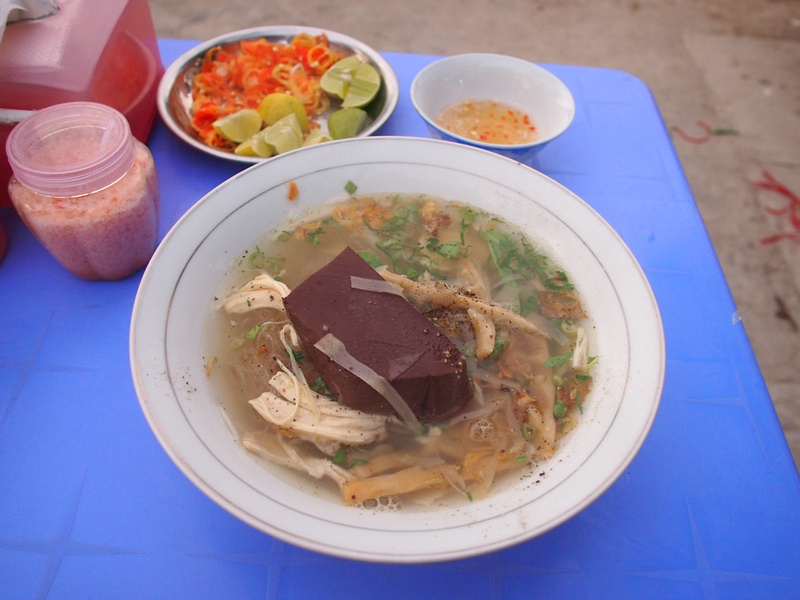 By the end of the day, I was feeling mightily pleased with myself for have stayed around, especially getting to see the sunset over the river. 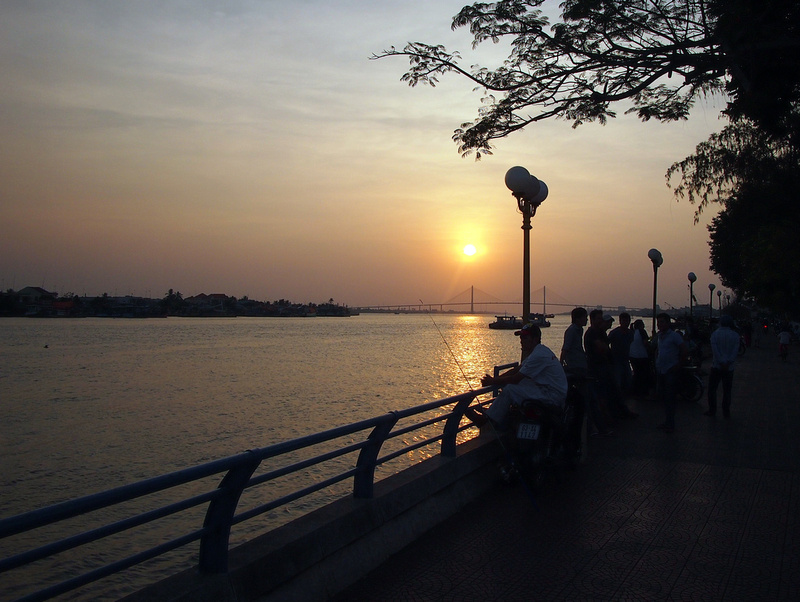 Read more about my provincial wanders in Vietnam.