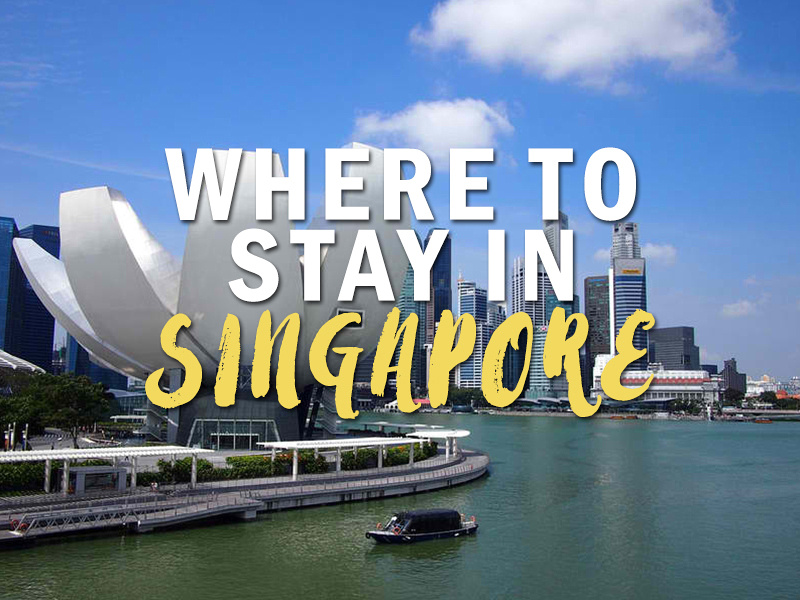 The city-state of Singapore is the most modern country in Southeast Asia. While it sometimes feels like a western city, it’s Malay, Chinese, and Indian heritage makes it a cosmopolitan Asian city.

If you’ve been travelling in the region then Singapore can be a shock to the system when it comes to accommodation prices. There are no cheap guesthouses like you find in Malaysia, and you won’t find a backpacker area like Khao San Rd in Bangkok or Pham Ngu Lau in Saigon.

For backpackers this will mean it’s back to hostel dorms, and the cheapest hotels are outside of the central area. If you’re on a strict budget then make sure you are within walking distance of a metro station and you will be easily connected to central Singapore.

If you are a visitor I think it’s best to stay in the historic central area to make the most of your time. For first timers I have put together this list of the best areas to stay in Singapore, along with some recommended hotels. 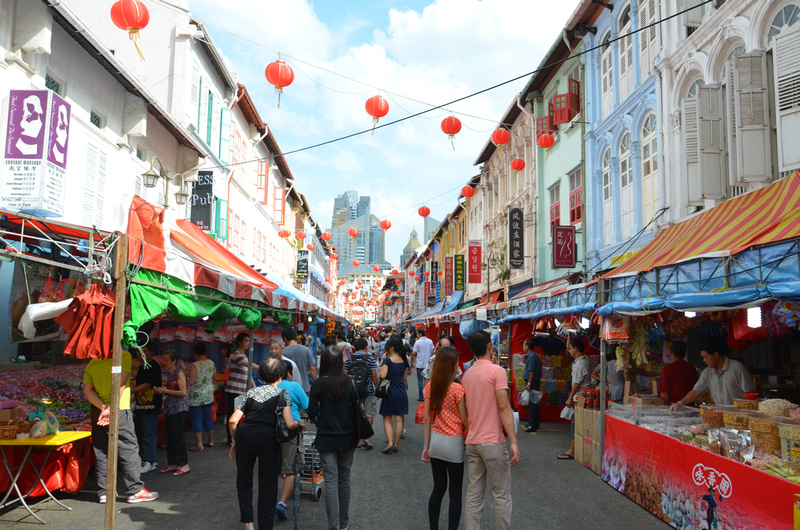 Chinatown is where the original community of Chinese immigrants settled in Singapore. The area is lined with Chinese stores, markets, temples, and great places to eat for all budgets. It’s centrally located next to the Downtown area and the Civic District and there is a variety of accommodation options, from hostels to 5-star luxury hotels.

Search for hotels in Chinatown.

The hostels and budget hotels aren’t as cheap here as other parts of town (like Little India or Bugis) as you are in the middle of the action here. If you prefer location over price then these are best rated options. 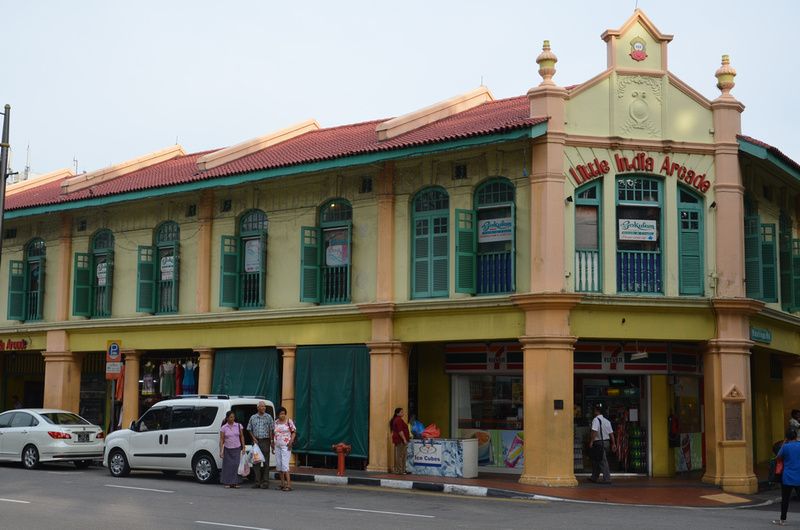 Little India is where most of the original Indian migrants (mostly from South India) made their home. Today it still retains its sub-continental flavour with hindu temples, markets, and lots of delicious places to eat. It’s a popular spot for backpackers and there are some good mid-range options here.

Search for hotels in Little India

I have stayed at Ali’s Nest, which is the cheapest guest house I’ve found in Singapore.

Other than that, the cheapest places are going to be hostels. Highly rated hostels in Little India include The InnCrowd Backpackers’ Hostel and the Clifden Hostel.

Bunc Hostel is ideally situated next to a metro station. Read my review of Bunc Hostel.

One Farrer Hotel and Spa 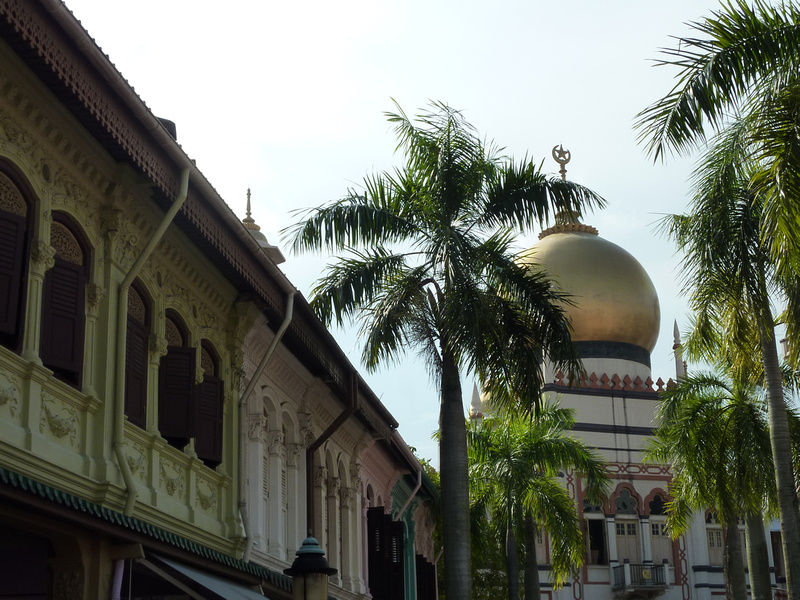 A short walk from Little India on the other side of the Rochor Canal is the Kampong Glam area. This is where Arab and other Muslim traders set up shop, with street names such as Haji Lane, Baghdad St, and Arab St. There is also the photogenic Bussorah Street and Sultan Mosque. The neighbourhood is now one of the trendiest in Singapore. Above there is Lavender.

Search for hotels near Kampong Glam. 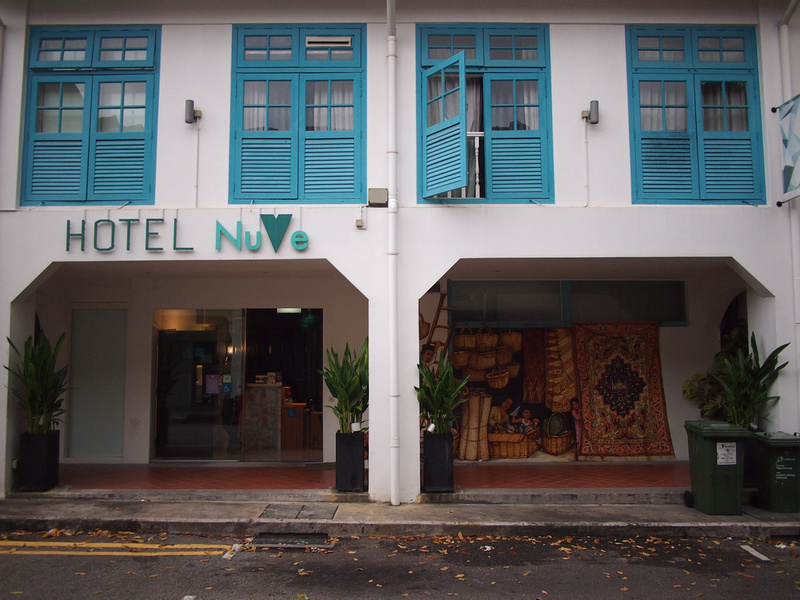 Hotel NuVe is a 3-star hotel in a well-reserved heritage street (my full review here). 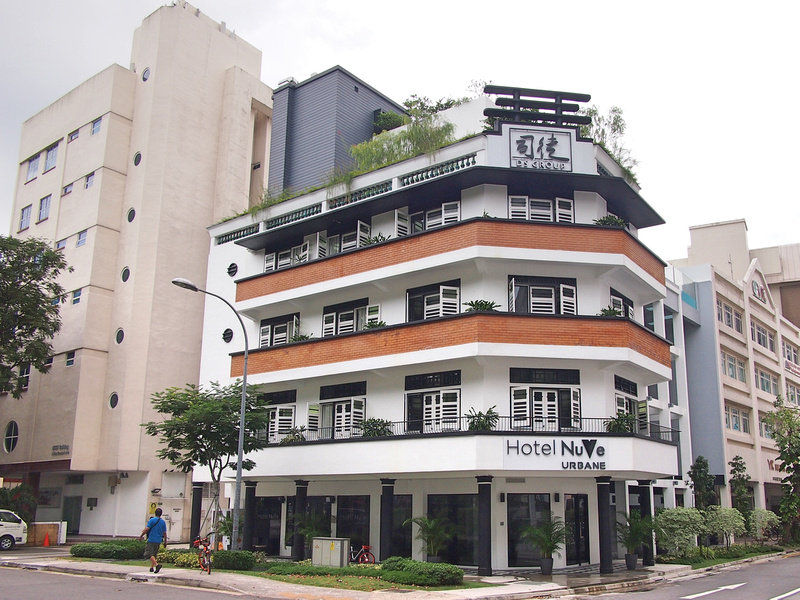 Bugis is below Kampong Glam and near Bras Basah; the arts and heritage district which is home to museums and monuments. Bugis has been redeveloped over recent years and has lots of food, shopping, and transport options.

I like staying in Bugis as the East West MRT Line from the airport stops here, making it an easy way to arrive. I stayed at the Plush Pods Hostel which was ideally located near the station. Many hostels in Singapore have now adopted the “pod style” of bedding, where your bed is either in a capsule (Japanese style) or has little walls and curtains around the bed for privacy. 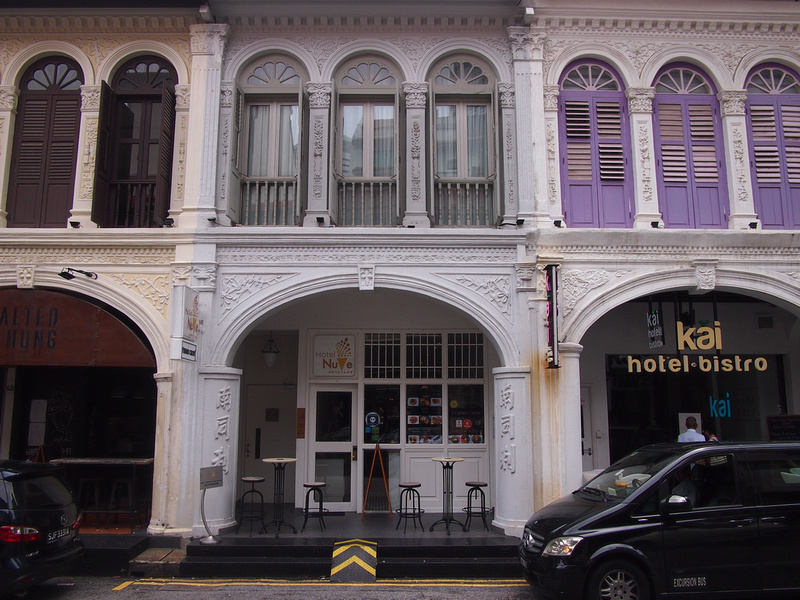 In 2018 another architectural landmark was added to the Singapore skyline with the addition of DUO, by German architect Ole Scheeren. This pair of concave skyscrapers are clad in a latticework of hexagonal windows, and one of the towers is home to Andaz Singapore – A Concept by Hyatt. This is the first Andaz hotel in Southeast Asia, where each hotel is one of a kind. DUO is connected via underground pedestrian walkways to Bugis MRT station. 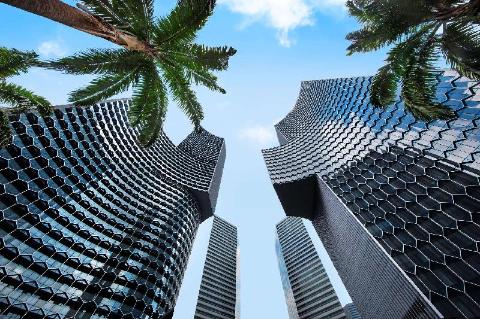 [Andaz Singapore – A Concept by Hyatt.]

Search for hotels near Bugis. 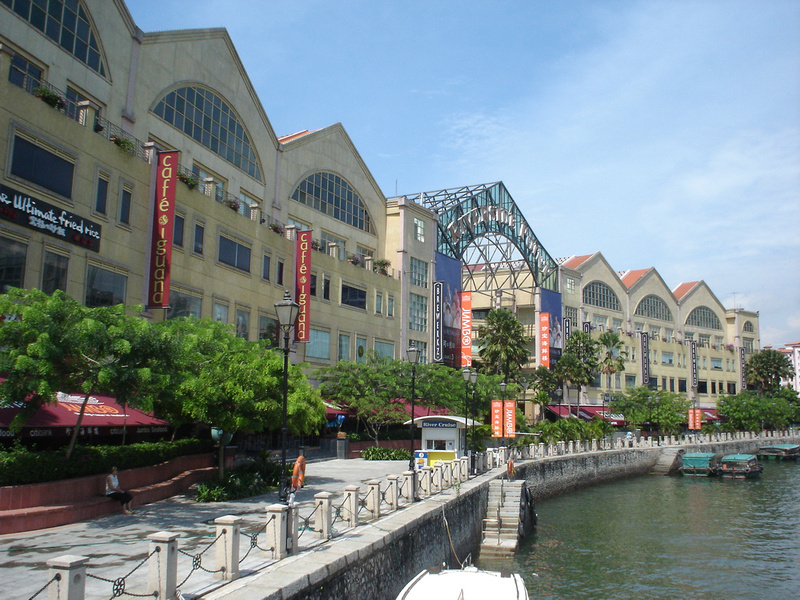 Between Chinatown and the Singapore river is Clarke Quay. There are lots of bars clubs around here and there are hostels and hotels for all budgets.

Next to Clarke Quay is Boat Quay, which is home to the 5footway.inn Project Boat Quay.

Search for hotels near Clarke Quay.

Near the mouth of the Singapore River on Collyer Quay, the Fullerton Hotel Singapore is a five-star luxury hotel that occupies the former General Post Office Building.

In the area between Boat Quay and Chinatown is the PARKROYAL on Pickering. This hotel lines a whole city block and has integrated sky gardens in the property. This award-winning eco-friendly hotel upholds Singapore’s stature as the garden city. 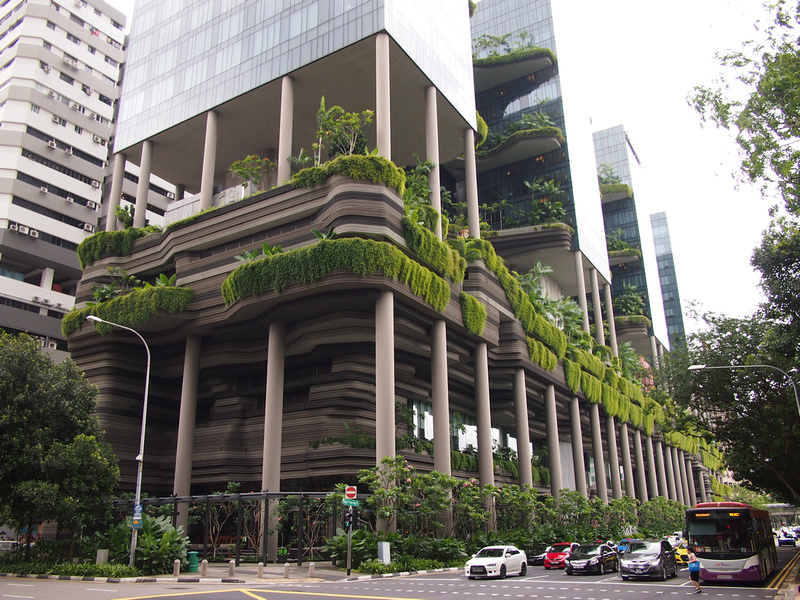 There are mainly high-end hotels around here, with the most famous being the Raffles Hotel. 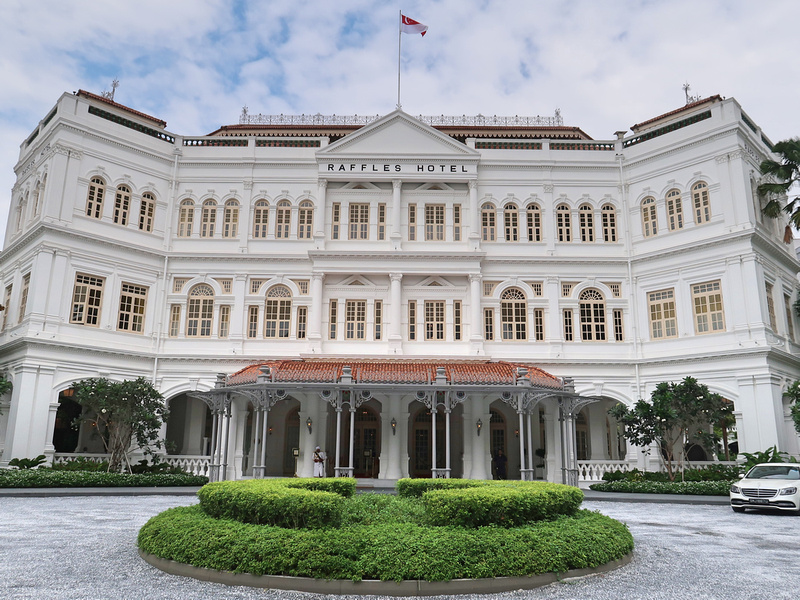 Raffles Singapore is a colonial-style luxury hotel that was opened in 1887 by Armenian hoteliers, the Sarkies Brothers. Named after the founder of Singapore, Sir Thomas Stamford Raffles, “The Raffles” is world-famous and has become a byword for staying somewhere luxurious. The Grand Old Lady of Singapore re-opened in August 2019 after a two-year renovation.

And if you’re not staying here (which is most of us) you can still visit the Long Bar to have a Singapore Sling, which is where the famous cocktail was invented. Note that no one in Singapore actually drinks this, but don’t let that stop you.

Most of the downtown/financial district is dominated by skyscrapers, with very little in the way of heritage buildings. More of the more exceptional modern buildings is Oasia Hotel Downtown, Singapore by Far East Hospitality. This hotel stands out among the grey and blue glass towers with its red facade covered in a vertical garden. 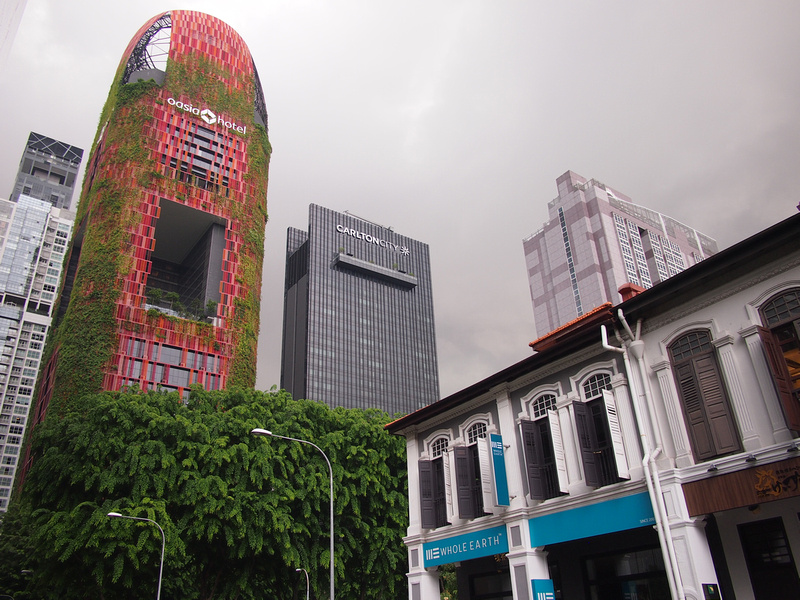 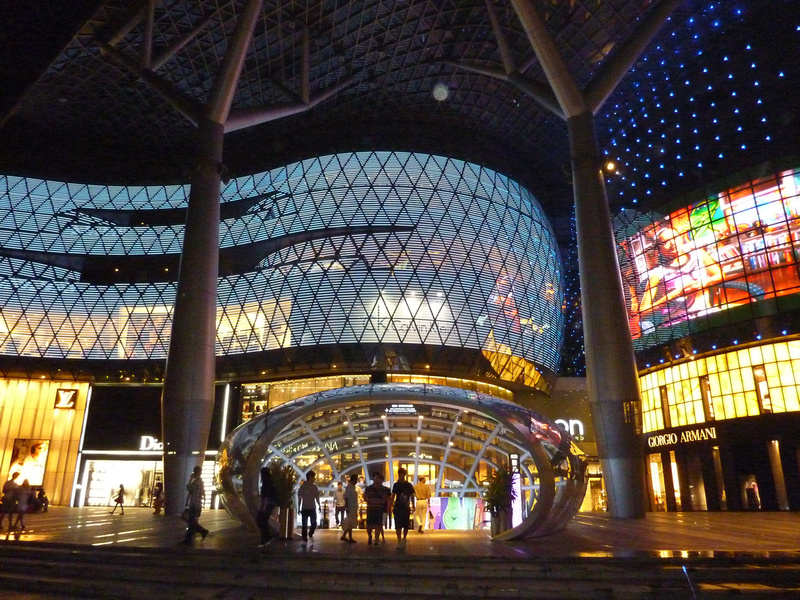 Orchard Road is the premier shopping street of Singapore. In recent years there’s been a redevelopment arms race, where each mall seeks to outdo each other in brashness. And unlike the malls of the US, UK, and Australia, the malls are actually good places to eat.

Most of the hotels here are high-end hotels with the few mid-range hotels getting average reviews.

I stayed at the Hotel Jen Orchardgateway Singapore (formerly Traders Hotel Singapore), which is the mid-range hotel brand of Shangri-La Hotels and Resorts.

At the far end of Orchard Road is the Orchard Parade Hotel by Far East Hospitality (reviewed here).

Mandarin Orchard Singapore is a landmark hotel on Orchard Road (read a review). 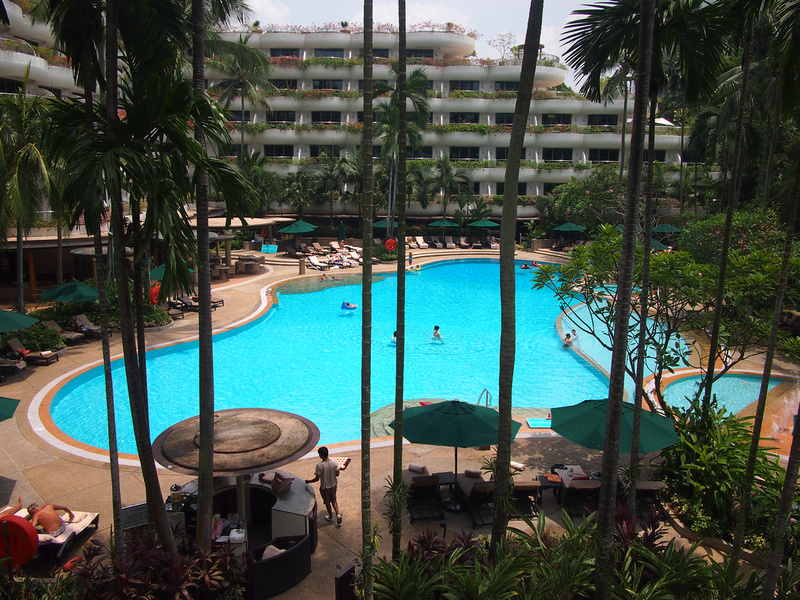 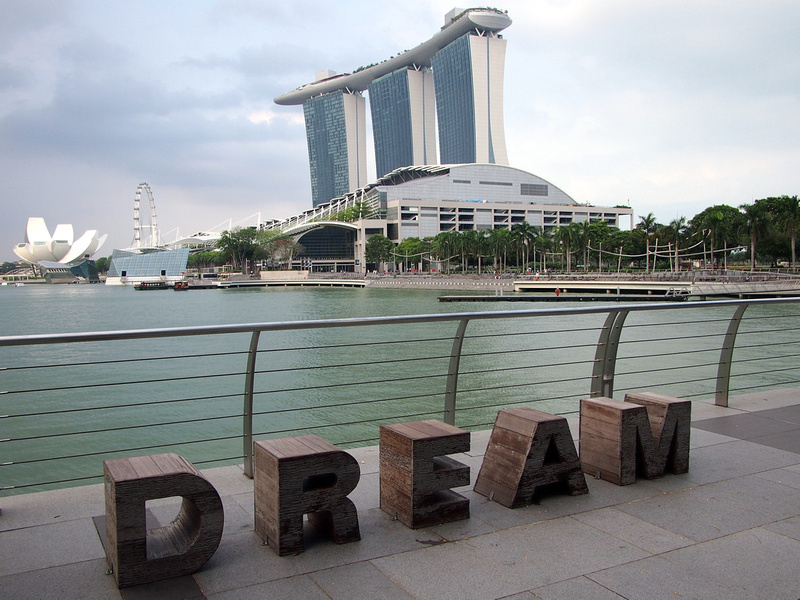 [This is where people stand and dream of staying at the Marina Bay Sands.]

Marina Bay is opposite the colonial and downtown area of Singapore on what is mostly reclaimed land. With the opening of the Gardens by the Bay and a metro station, the area has shifted the centre of gravity of the city. Being a redevelopment project in a prime location, the hotels here are in the 4-5 star range.

Marina Bay Sands is the most recognisable hotel in Singapore with its giant swimming pool straddled across its three towers overlooking the bay.

The world’s largest rooftop pool stretches 150 metres across Sands SkyPark, and it might also be world’s most famous Infinity Pool. The rooftop is only accessible by hotel guests, just in case you were thinking of sneaking a pool selfie for the ‘gram. 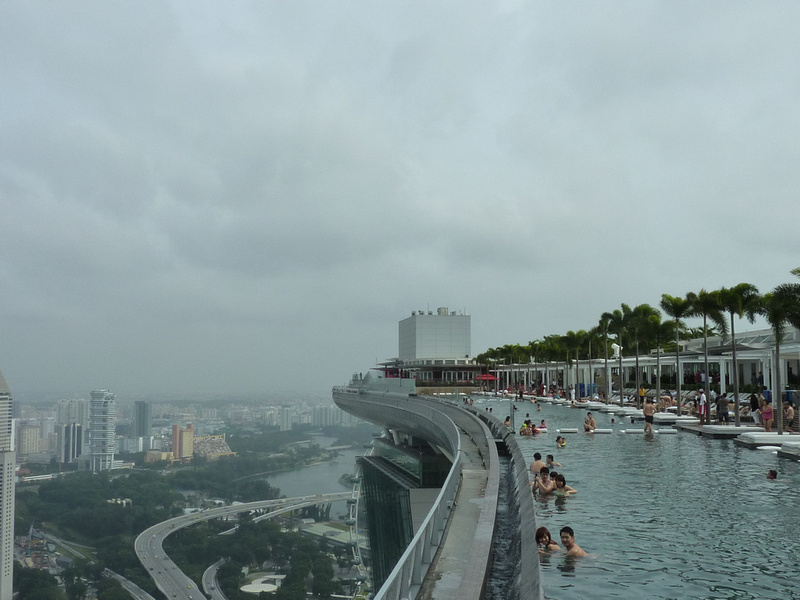 This landmark hotel was a fitting location for the movie Crazy Rich Asians. If you want to splurge on a memorable stay then this is the place to do it. Here is my review of the Marina Bay Sands.

For views of the Singapore skyline – including the Marina Bay Sands – the best-rated hotel is the The Ritz-Carlton, Millenia Singapore.

Search for hotels in Marina Bay. 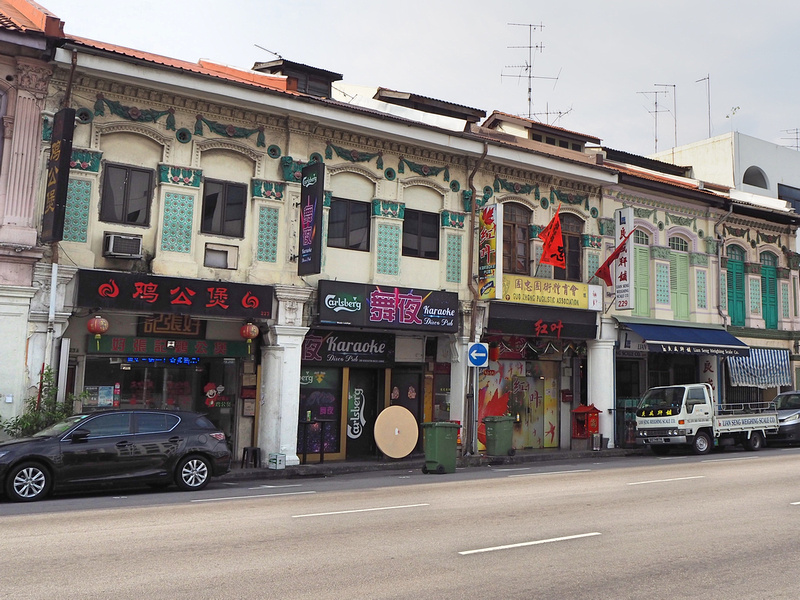 An emerging neighbourhood that is worth considering for budget hotels is Geylang. I say emerging because this area that was once synonymous for being the red-light district has been (for better or worse) cleaned up somewhat, and it now seeing new hotels. With it’s location close to central Singapore and a good stock of heritage buildings, it was only a matter of time before it became desirable as a place to stay.

The Oxley Hotel is a typical example of what to expect from a cheap hotel in Singapore. Here is my review of the Oxley Hotel.

Search for more hotels near Geylang. 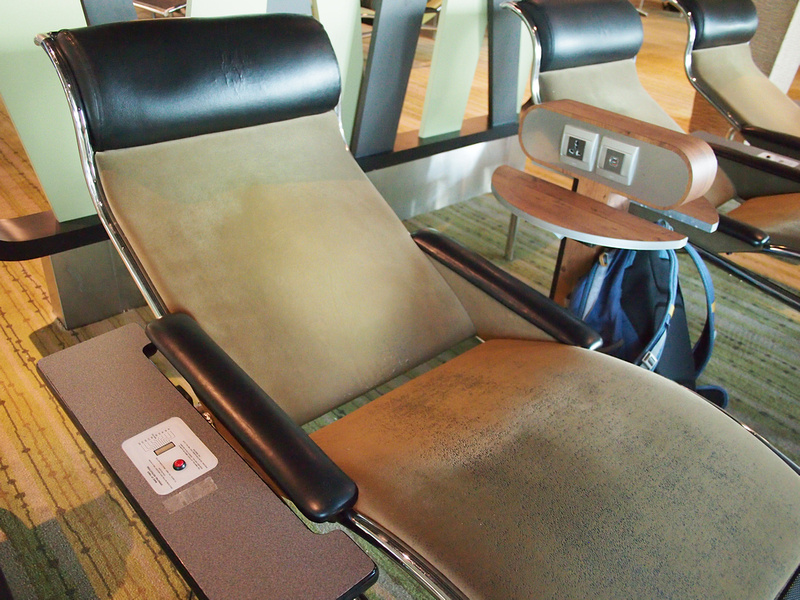 [A lounge chair with alarm clock at Singapore Changi Airport.]

With one of the biggest airports in the region the chances are you might just be passing though without time to stay. Changi Airport is consistently awarded as one of the best in the world, so if you have to do an overnighter at an airport then you could do worse than Changi. Here is a review of one time I stayed overnight at SIN. I didn’t get any sleep but it was an enjoyable stay for an airport.

For a more luxurious stay the Crowne Plaza Changi Airport has been voted as the best airport hotel in the world. 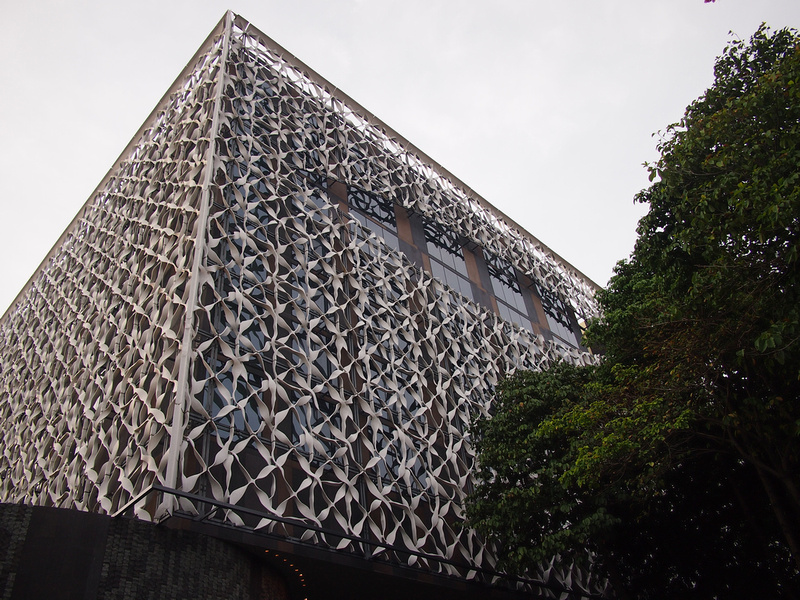