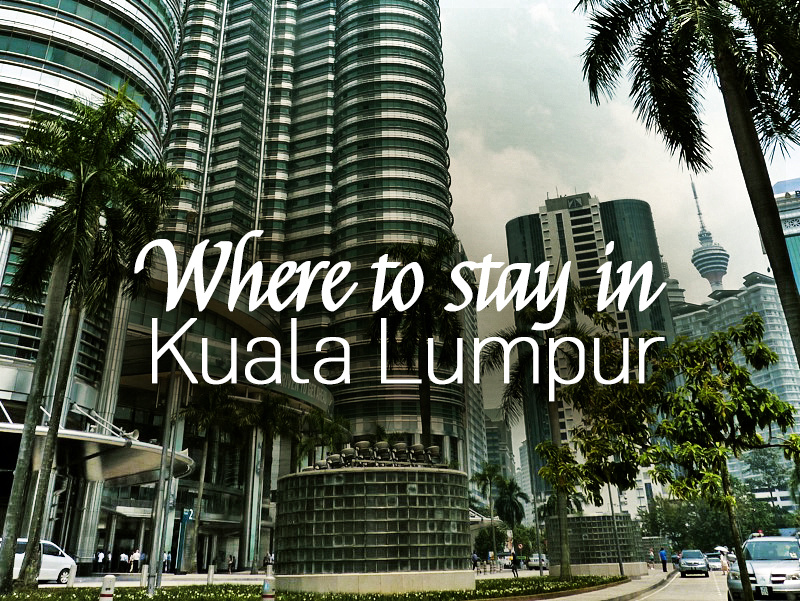 Kuala Lumpur is the biggest city in Malaysia and a major air hub for travel in Southeast Asia. If you are travelling in the region the chances are you are going to passing through here at some point. While it’s nowhere near as big as Bangkok, it’s a spread-out city that can be hard to navigate at first.

To help find a hotel in Kuala Lumpur I have narrowed down the best areas to stay if you are visiting for the first time. These areas are centrally-located and with public transport, and have access to the most popular sites in KL. 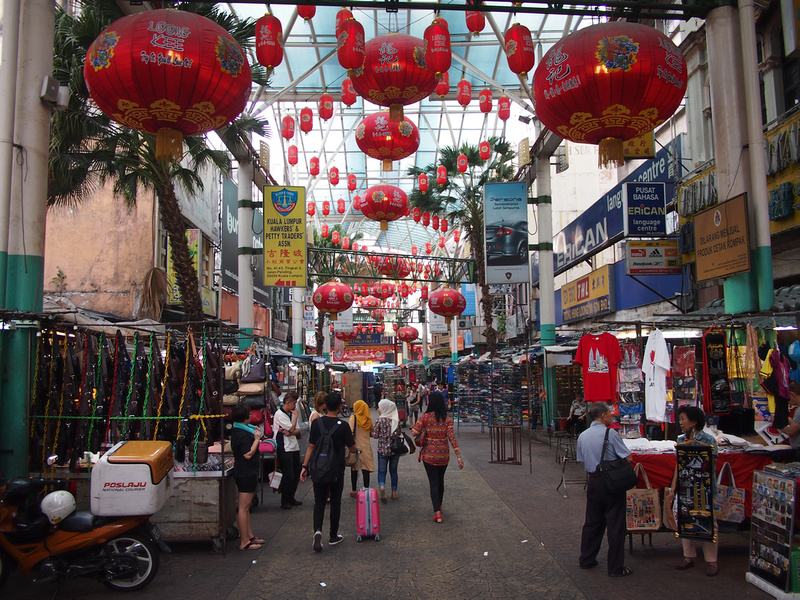 Kuala Lumpur gets its name (“muddy confluence” in Malay) from where there Gombak and Klang rivers meet. At this junction is the Jamek Mosque, and the area around here is the old city. Near the river is the historic colonial administrative buildings, and the many shophouses of the old city and Chinatown.

Chinatown is where you will find the cheapest budget guesthouses and the most lively street activity. Hostels and guesthouses are clustered around the Petaling Street market, and it’s also near the colonial-era administrative buildings. Some of the budget options are very basic, catering for the backpacker set, while the mid-range options are the cheapest in central KL.

This area has been undergoing a transformation. The combination of a central location and historic buildings means there will be more new hotels in the future.

I’ve stayed at The Travel Hub Guesthouse and Matahari Lodge, which are budget options in the Chinatown area.

If you’re looking for the absolute cheapest hotels in Kuala Lumpur you could try your luck with the guesthouses on Jalan Pudu, opposite Pudu Sentral (Puduraya) bus station. Here you will find some rooms for 40-45 MYR per night. None that I would personally recommend as they are pretty grim, but I’m just putting this here as information.

The Travelodge City Centre is in a prominent flatiron-shaped building opposite the Central Market.

And signalling that this area is getting more upmarket, the Four Points by Sheraton Kuala Lumpur, Chinatown is in a new building that opened in late 2019. 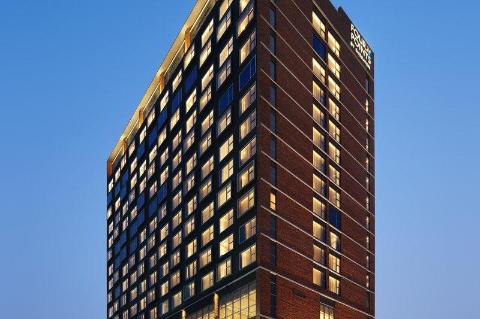 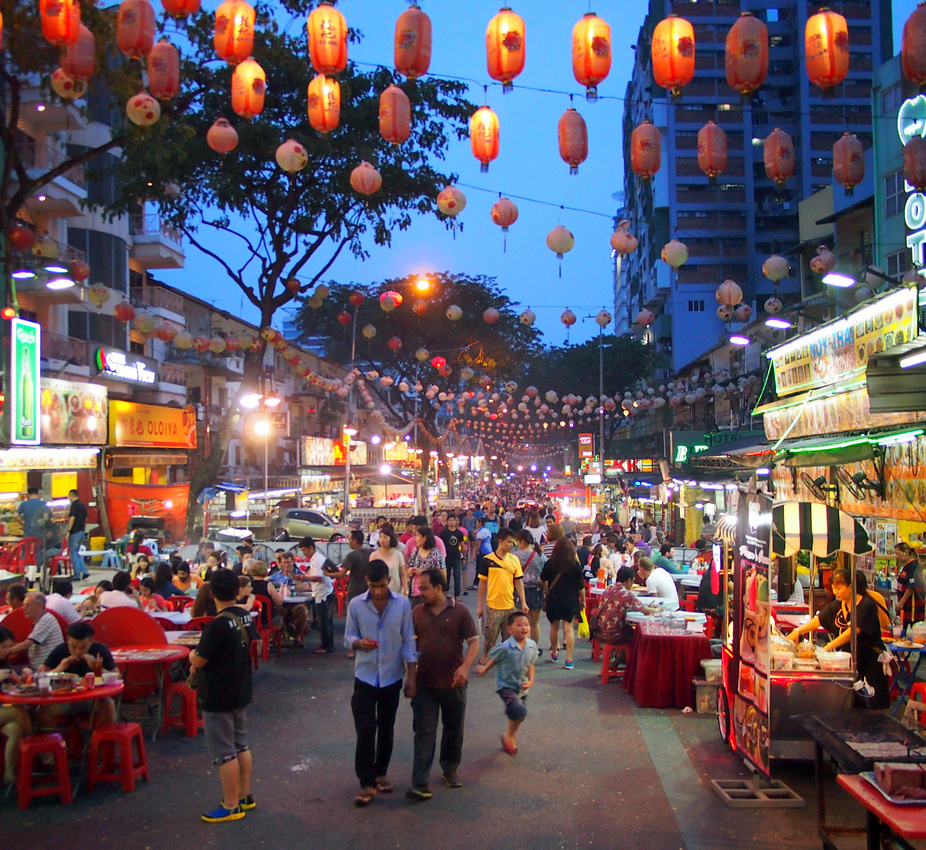 Bukit Bintang is a popular shopping street in central KL. When looking for a place to stay, the surrounding streets are usually referred to as the Bukit Bintang area. Running parallel to Bukit Bintang is Jalan Alor, which has a famous night food market on the street. There are bars, nightclubs, and mega malls here, and its also popular with Arabian travellers. This area is KL at its international best.

The Bukit Bintang area has also been through extensive redevelopment over the last few years. There is a new metro station – Bukit Bintang on the Sungai Buloh–Kajang line (Line 9) – and Bukit Bintang City Centre is rising at the site of the old Pudu Jail.

The central point of this area is the junction of Bukit Bintang and Jalan Sultan Ismail. The Bukit Bintang monorail station is near here, and the corner is starting to resemble a mini Times Square with all the bright lights and electronic advertising displays.

There are plenty of mid-range hotels, and some cheap guesthouses (though generally not as cheap as Chinatown). On the other side of Jalan Sultan Ismail are luxury hotels, so this area has something for everyone. If you wanted to narrow your search down to one area then I would pick here.

Wolo Hotel Bukit Bintang sits prominently on the corner of Jalan Bukit Bintang and Jalan Sultan Ismail (the “Times Square” corner). This mid-range boutique hotel bills itself as “a hotel for the curious and creative traveller”. 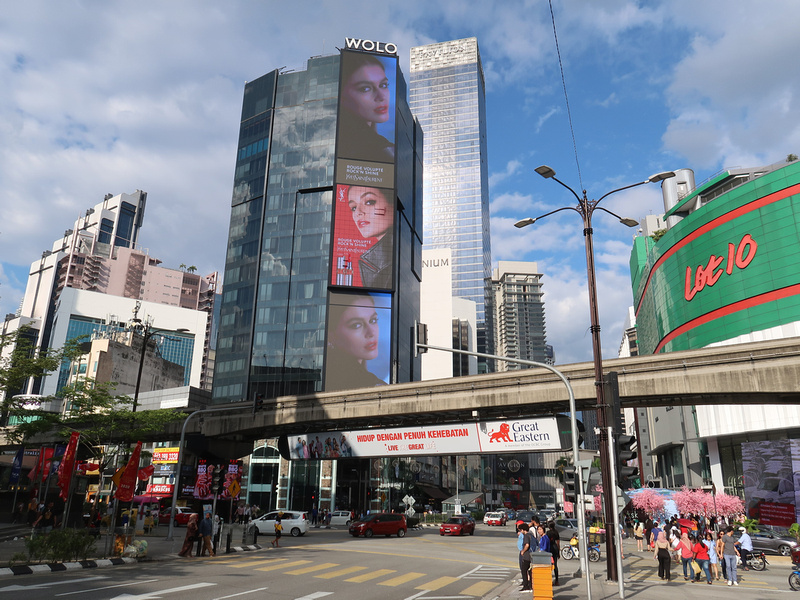 [Wolo Hotel on the corner of Jalan Bukit Bintang and Jalan Sultan Ismail.]

The Kuala Lumpur Journal Hotel has a modern retro vibe and is right in the middle of the BB action. 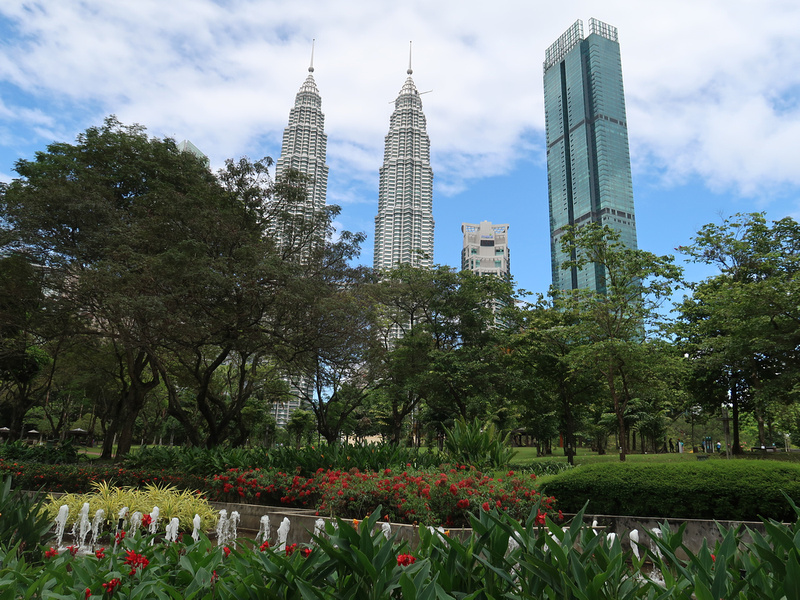 KLCC (Kuala Lumpur City Centre) is the central business district of KL, with the Petronas Twin Towers being the undisputed highlight of this area.

There are lots of malls and luxury hotel chains in this area, including the Suria KLCC shopping mall at the base of the twin towers. This opens out to the KLCC Park, where there are numerous hotels that offer views of the twin towers that are so sought after by Instagrammers.

The Kuala Lumpur Convention Centre is in this area, and the streets are generally less chaotic than the rest of KL. Being a high-end luxury area it’s also a bit harder to find cheap eats, but Bukit Bintang is not far away. 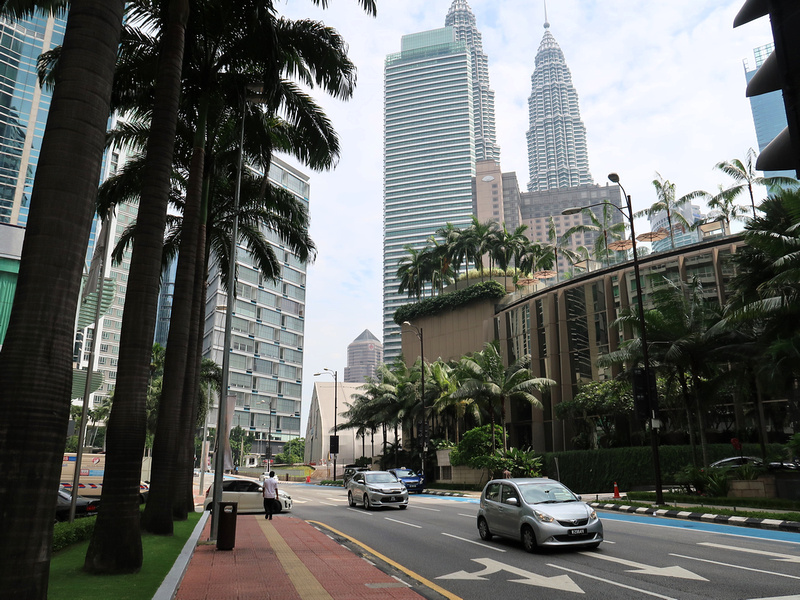 Like the rest of central Kuala Lumpur, KLCC is undergoing extensive redevelopment. There is a new metro line being built at KLCC East, and new office towers and hotels are being built around that.

KLCC is best if you want a great view of the Twin Towers, if you have a preferred luxury hotel, or are in the area for work. For budget travellers I would stick to Chinatown and Bukit Bintang if it’s your first time in KL.

Holiday Inn Express Kuala Lumpur City Centre is rated 3.5 Stars and is nicely situated to be within walking distance of Bukit Bintang and KLCC. 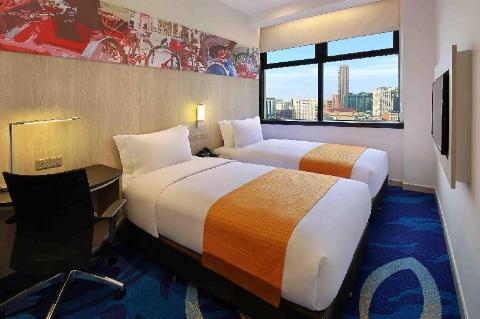 Traders Hotel by Shangri-La is well-known for having one of the best views of the Petronas Towers. The hotel faces the park behind the Twin Towers, so there is no other building to obstruct the view. 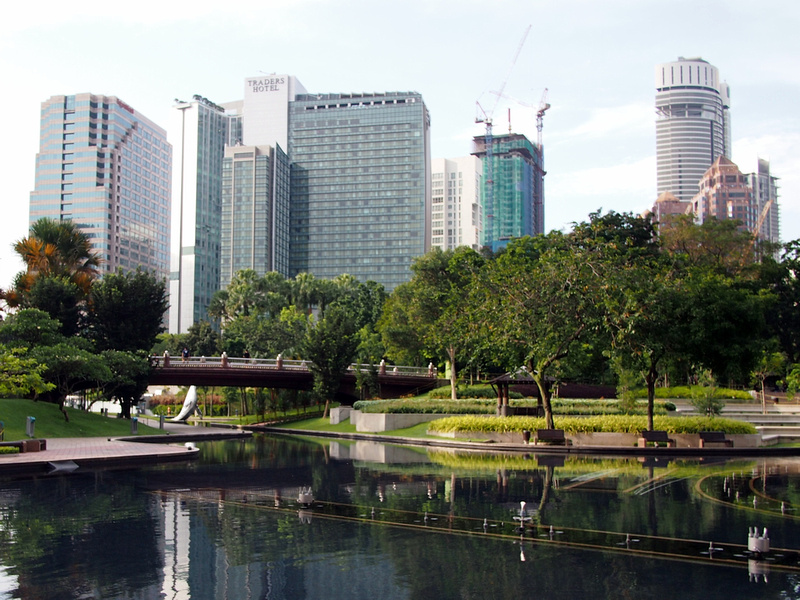 W Kuala Lumpur is a 5-star hotel that has a swimming pool view of the twin towers. 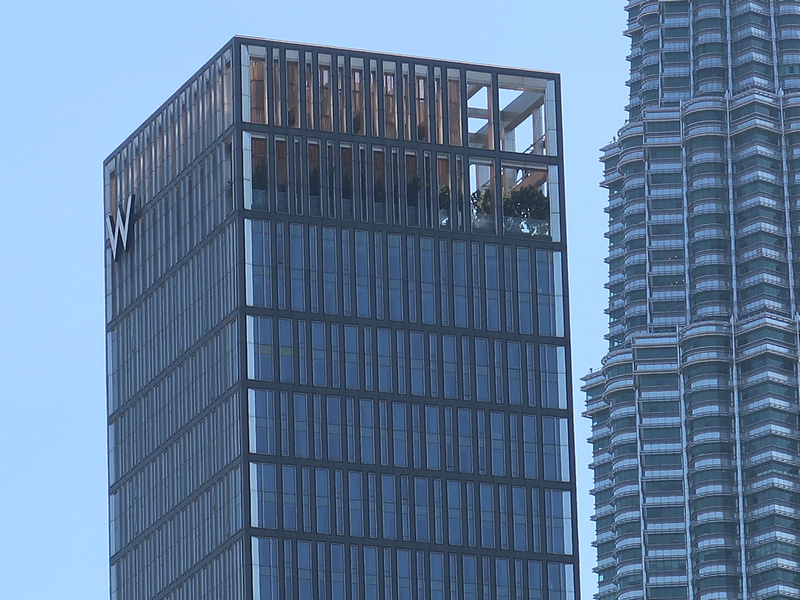 In any other city the 343-metre tall Four Seasons Hotel would be a defining landmark of the skyline. Here it’s standing next to the twin towers, so its height is not immediately apparent. 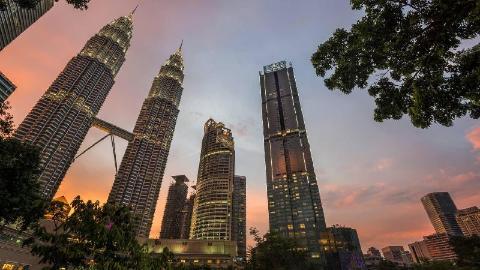 The Shangri-la Hotel is set in a lush tropical garden ideally located between the twin towers and Bukit Bintang. Here is my review. 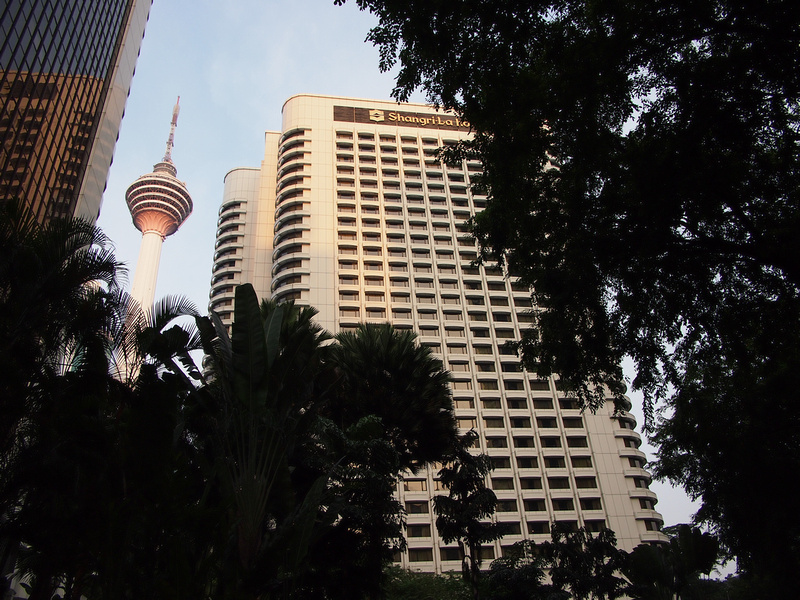 Around the station a new central business district has evolved, and there are some famous hotel names here.

Opposite the station is the Brickfields area. As the name would suggest, this area was home to the brick factories that supplied the bricks for the building of Kuala Lumpur in the late 1800’s. This area was quite run down before KL Sentral opened in 2001. Even now there are still some old guest houses that hint at a less glorious past, but the area is cleaned up due to its prime location. A few minutes walk from here is the vibrant Little India area of KL.

As a frequent traveller to Kuala Lumpur I have often stayed in Brickfields when I am just transiting for a night. From the airport you can get the fast train to KL Sentral, and then walk outside. I would stay here if you want a speedy getaway in the morning, or if you have an allegiance to one of the high-end hotels at the station.

Budget hotels near KL Sentral are accessible through the NU Sentral shopping mall and overpass across Jalan Tun Sambanthan. KL Setral can be a bit confusing if you’re not familiar with it, so follow the signs that point to the monorail station and that will get you there. 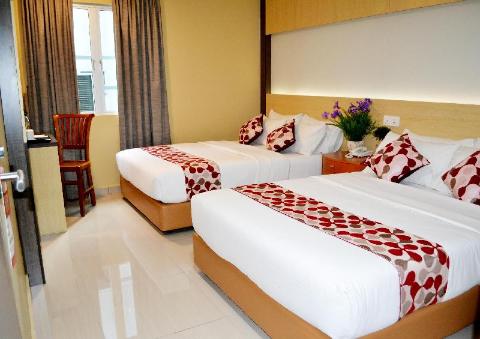 Some of the familiar names built on the station complex include the 4-Star Aloft Kuala Lumpur Sentral and Hilton Kuala Lumpur, and the 5-Star Le Méridien Kuala Lumpur. These are ideal for business travellers where time is of the essence. From here the airport express train takes just 28 minutes to KLIA. 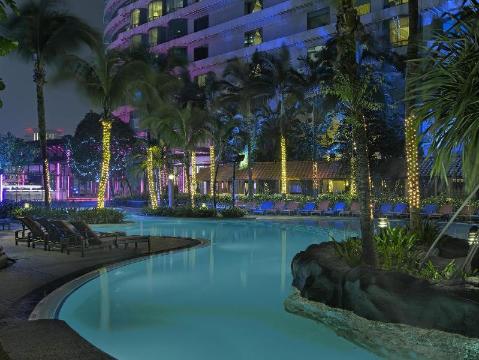 An emerging neighbourhood in KL is the Chow Kit area. I wouldn’t stay here if it’s your first time in KL, but I’m putting it here for regular visitors who would like to consider other areas. Chow Kit is in the central city area not from from KLCC. It’s been going through a regeneration of late, and it burst onto the international scene when it was featured by The New York Times in their list of 52 Places To Go In 2020.

The first area to check is the area I call “Lower Chow Kit”. Sometimes the hotels here are classified as being in KLCC or the Golden Triangle. There is no set boundary, but they are technically in Chow Kit.

The hotel of the moment here is the Hotel Stripes Kuala Lumpur, Autograph Collection. 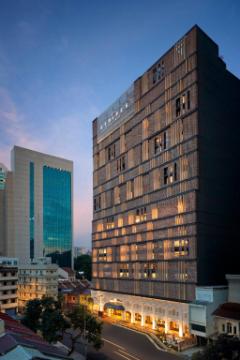 Also around here is the The Heritage Hotel and the Sheraton Imperial Kuala Lumpur.

On the main street of the Chow Kit commercial area is The Chow Kit Hotel. 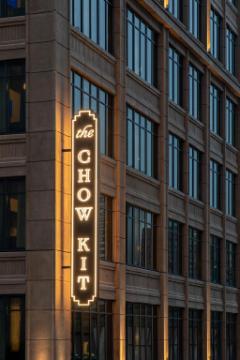 Next door is MoMo’s Kuala Lumpur, which is described as “social hotel with micro-rooms”. In the reception is a cafe, bar, and MoMosita Taco Bar.

Bangsar is a popular area for expats so I’ve listed this if you want an extended stay away from the touristy areas. It’s one stop away from KL Sentral on the MRT so it’s accessible for casual visitors without a car. There are not as many hotel options so try Airbnb.