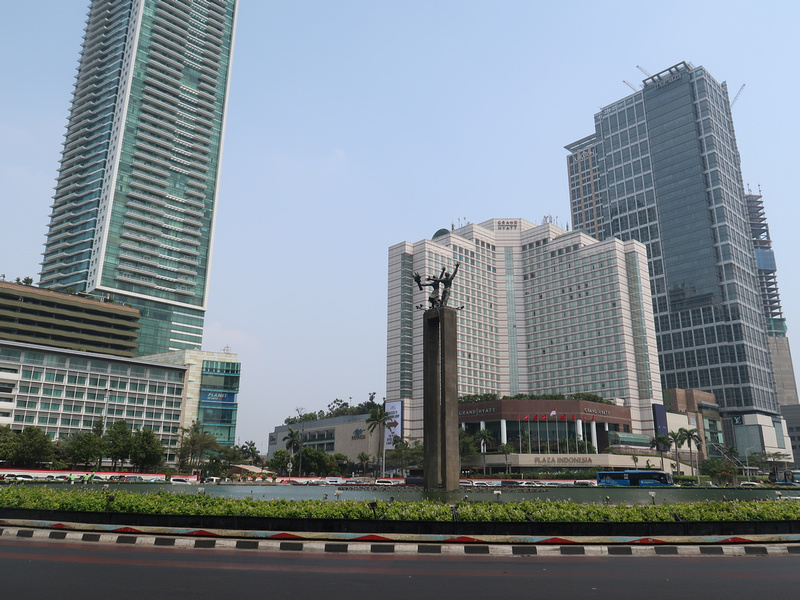 Jakarta is the biggest city in Southeast Asia, and finding a place to stay here can be an overwhelming experience when confronted with the map of the city.

Despite its size and unruly streets, finding where to stay in Jakarta is manageable if you stick to a defined area that is most useful for first-time visitors.

This is not to say that the other hotels outside this area aren’t worthy, and I have stayed in such places myself. But for the first-time visitor to Jakarta, I recommend sticking to the following areas to make your visit as efficient as possible.

Jalan Jaksa (Jaksa Street) is the unofficial backpacker street of Jakarta. There used to be quite a scene here when backpackers were overlanding in droves across Indonesia. The street was ideal for overlanders as it’s near Gambir Station (the long-distance railway station).

These days the backpacker scene here is all but gone, but it still remains the best place to stay if you are on a budget. It’s a short walk from the National Monument, which if you had to pick the central point of Jakarta then you would go with this.

For the ultra-budget conscious there is a selection of cheap hostels and losmen (family guesthouses) where you can turn up and look for a room. You have no choice but to do this as these sort of places aren’t listed on booking sites. Most of them are in dire need of renovation by now, so you will be getting the full grungy backpacker experience.

For the cheap places with walk-in bookings go to Jalan Kebon Sirih Barat I, which is opposite Alphamidi on 31 Jalan Jaksa. Down this alley you will see signs pointing to little places to stay. 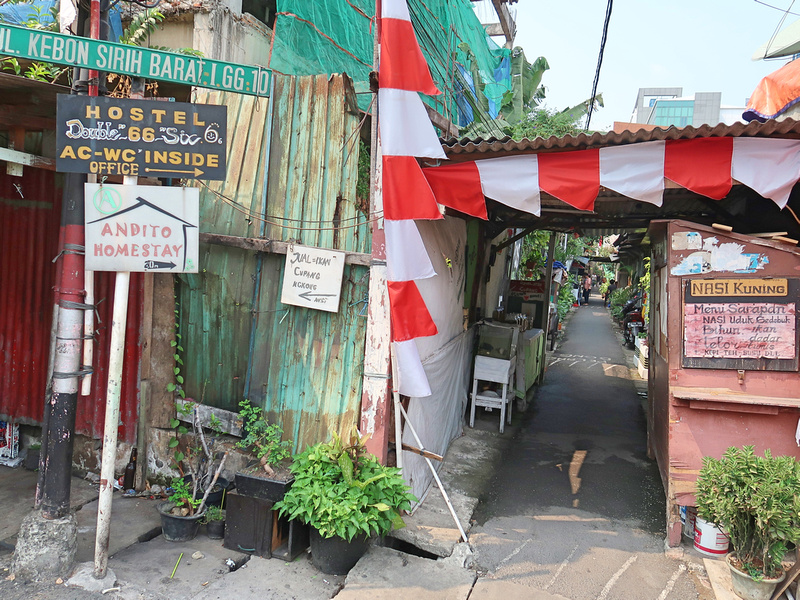 At the rate this street is gentrifying they may not even exist soon, so I will keep this post updated if I hear of any changes.

On Jalan Jaksa there are still some old guesthouses that remain from the backpacker days. The Tator Hotel is one of the old-school hotels that has dorm rooms and private rooms. I stayed in another hotel that was terribly run down, and I would only recommend for the ultra price-conscious.

One of the new hotels is the Dafam Express Jaksa Jakarta – modern boxy block that has become a common style in Indonesia (especially Bali). Jalan Jaksa junctions with Jalan Kh Wahid Hasyim, which has some of the best variety of mid-range hotels in Jakarta. This street runs between the Sarinah Mall (the future junction of metro lines 1 and 2) and Gondangdia station on the commuter railway. There are lots of places to eat around here, and it’s a 15-minute walk to the current metro station at Bundaran HI.

For first-time visitors to Jakarta, I think this street is hard to beat in terms of value, amenities, and access to transport. It’s also within striking distance of the main tourist sites, making it ideal if you are visiting Jakarta for the first time.

The good thing about Wahid Hasyim Street is that the city planners have put some effort into taming the street, with wide footpaths and bollards to block cars from parking on the pedestrian areas. The Akmani Hotel has also done its bit to make the street more beautiful with frangipani trees outside. 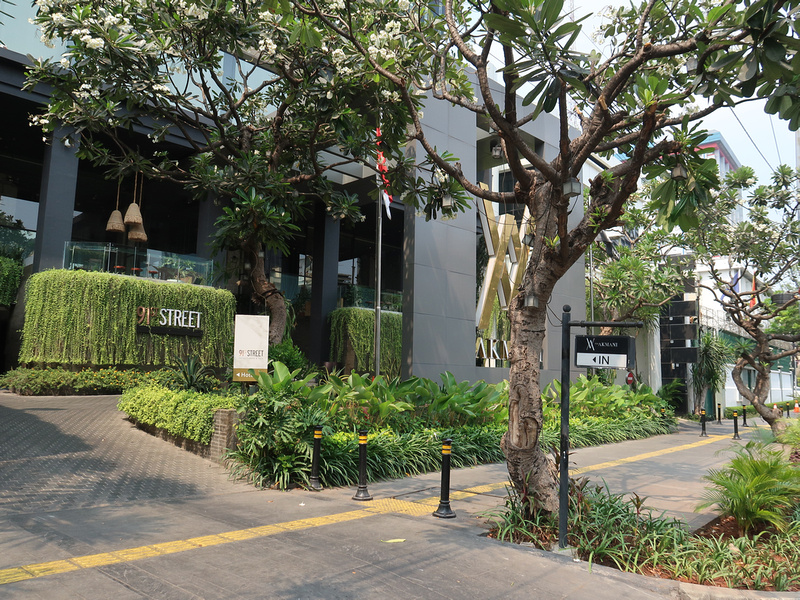 Notable hotels on this street include the Ibis Jakarta Tamarin Hotel and the Aloft Jakarta Wahid Hasyim. 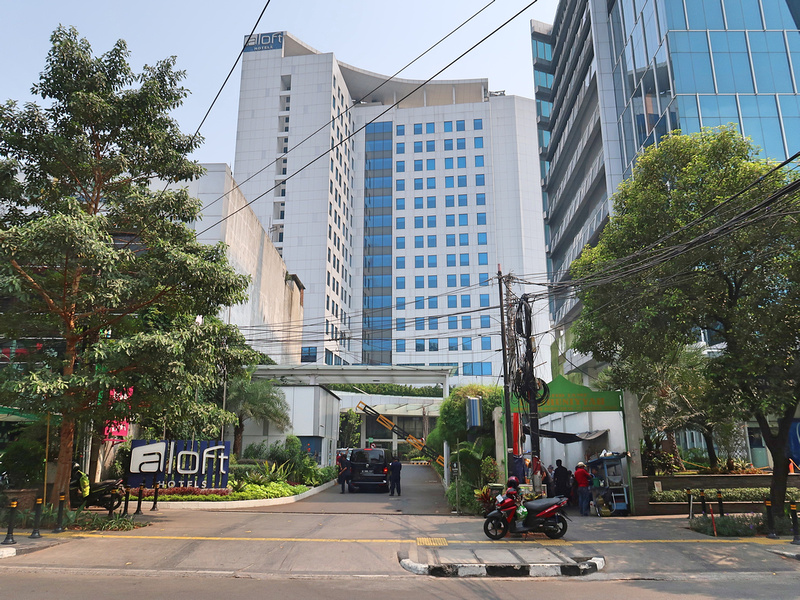 Behind the corner of Jalan Wahid Hasyim and Jalan Thamrin is ARTOTEL Thamrin – Jakarta. This 3-star hotel is popular especially for this prime location. 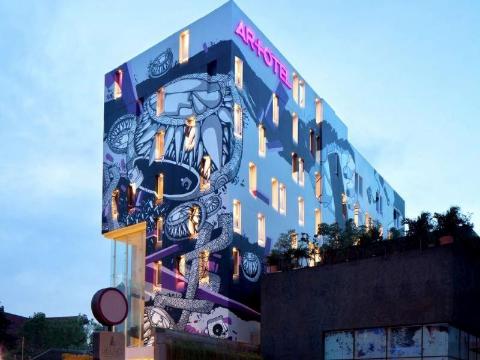 At the budget end of the spectrum are hotels like Paragon Gallery Hotel Jakarta (now a RedDoorz Hotel). 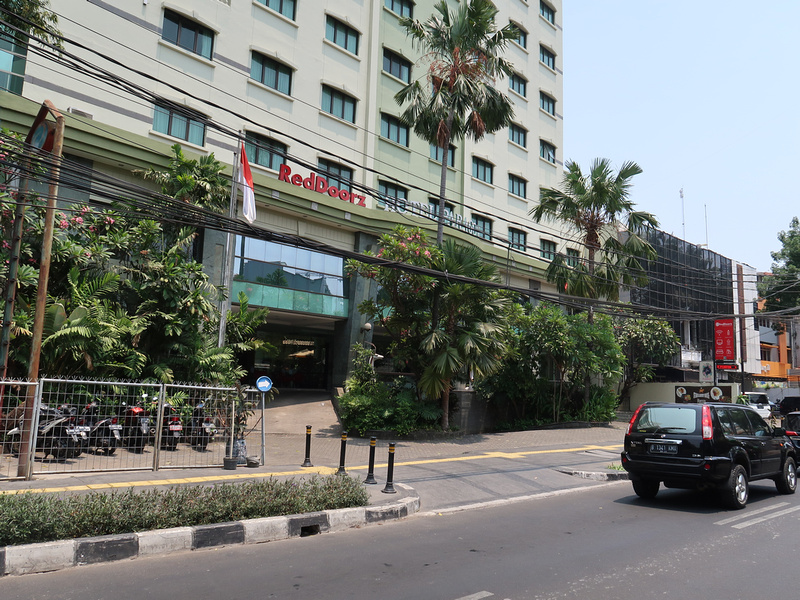 When looking on booking sites (such as Agoda) they will show Jalan Jaksa and Jalan Kh Wahid Hasyim under the Thamrin neighbourhood option.

The area around the Selamat Datang Monument is home to fancy malls and brand-name 5-star hotels. This is on the big north-south thoroughfare of Jalan Thamrin (Jalan M.H. Thamrin) north of the monument, and Jalan Sudirman (Jalan Jenderal Sudirman) south of the monument.

On the north side of the roundabout on Jalan Thamrin is Bundaran HI metro station (the current northern terminus of the North-South metro line). From Bundaran HI it’s a 20-minute walk to Jalan Jaksa. 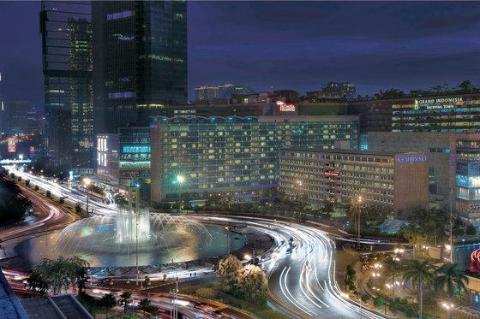 On the northwest corner of the roundabout is the Plaza Indonesia Mall, home to the Grand Hyatt Jakarta and the Keraton at The Plaza, a Luxury Collection Hotel, Jakarta (yes that’s it’s actual full name). 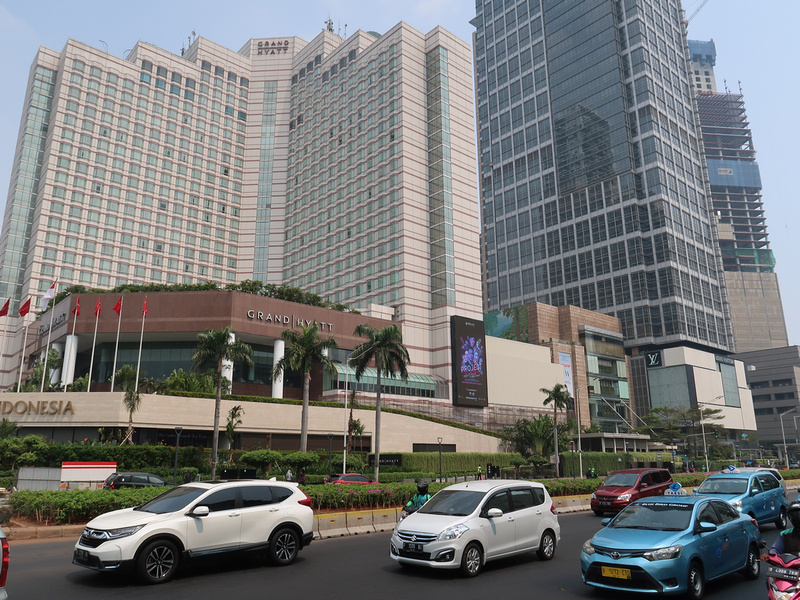 Opposite Plaza Indonesia on the northeast corner is the Pullman Jakarta Indonesia. 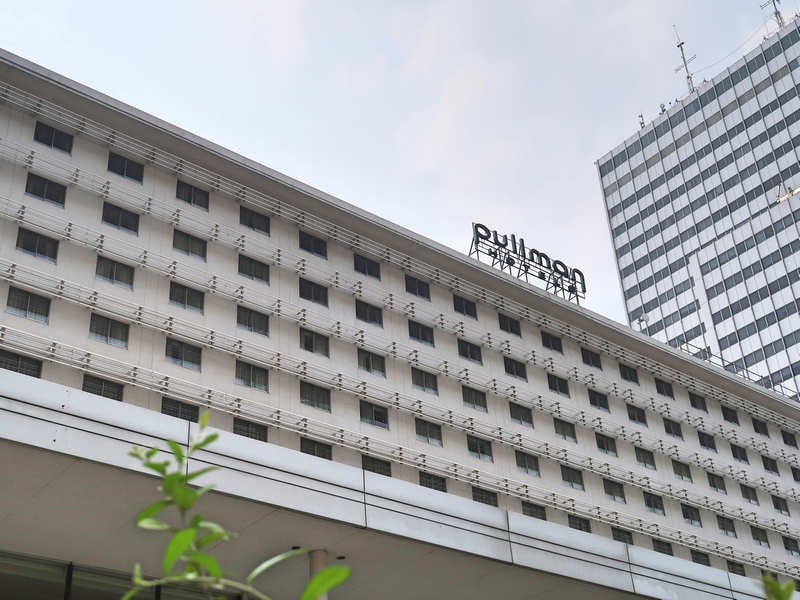 And rounding out the ring of luxury on the southeast corner is the Mandarin Oriental, Jakarta. 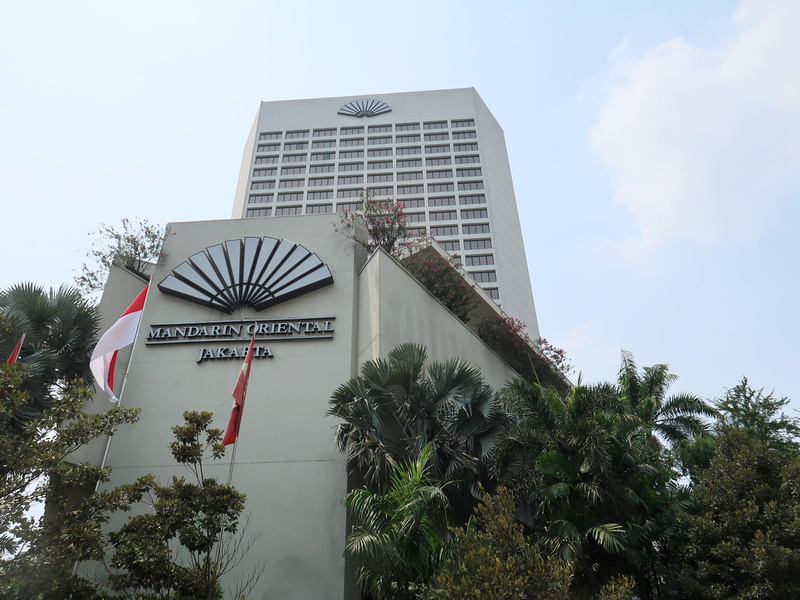 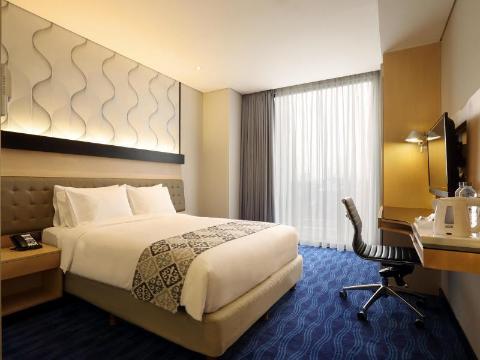 The airport train station is also near Sudirman Station for the commuter railway, and the small streets around this station have some more budget-friendly hotel options. Don’t expect too much of budget hotels here, but this area is a good option if you want to be near the airport train.

If I had the money or points to burn then I would stay around the Selamat Datang Monument area. Like most neighbourhoods that have a high proportion of luxury hotels, the area is a bit of a food desert, but there are more food options around the BNI City and Sudirman train station area. 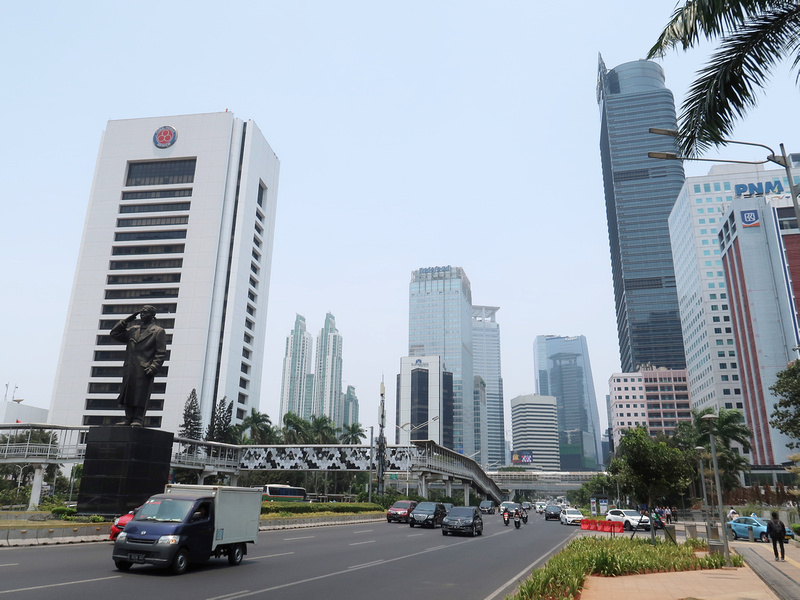 Mega Kuningan is the main business district of Jakarta, and it’s within the area that is referred to as The Golden Triangle. At the top of the triangle is the BNI City airport train station, and the western side of the triangle has the metro running down Sudirman Road.

If you are doing business in this part of Jakarta or you like the big name hotels then this is your area.

Some of the more familiar names here include the Ritz-Carlton Jakarta and JW Marriott Jakarta. 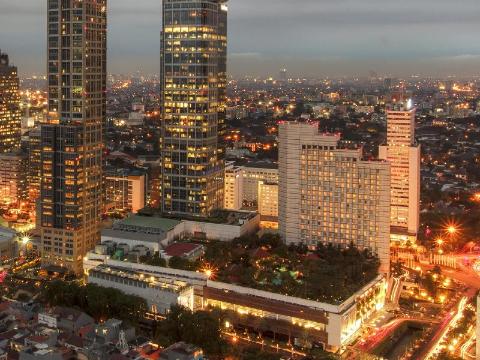 There are also budget hotels in this area, including the ubiquitous RedDoorz brand.

This area wouldn’t be my first pick as a first-time visitor unless you are attending business in the area or are burning/collecting hotel points at a preferred hotel chain. 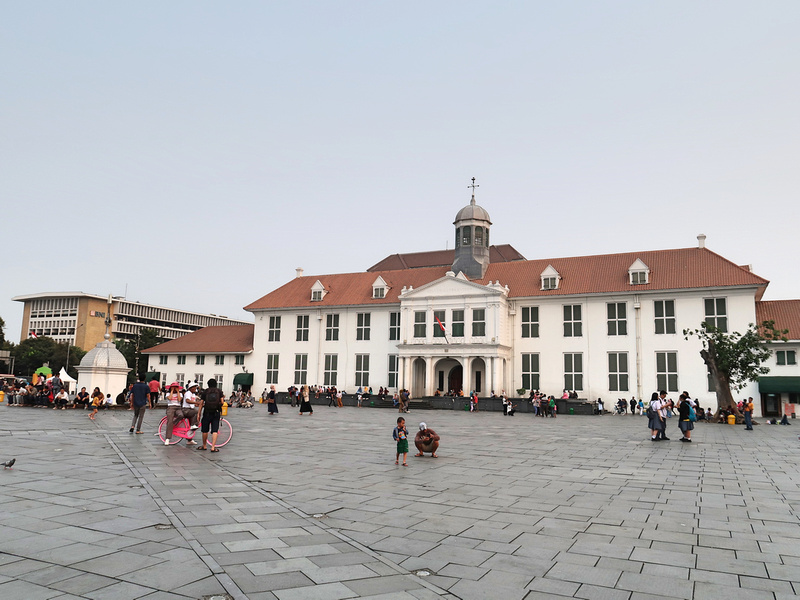 Kota is the old town of Jakarta, in the area that was known as Old Batavia in colonial times. Despite having the best heritage architecture in Jakarta this area hasn’t realised its full potential yet. This neighbourhood should be like Chinatown in KL, which is undergoing a revival.

This may change once the extension of the north-south metro line is completed. Kota will be the terminal stop for the northern extension. This may bring a transformation of the area like Chinatown in KL.

Kota is already served by the commuter railway so it’s not hard to get to. The main problem is lack of amenities compared to Jalan Wahid Hasyim.

Wonderloft Hostel opened in 2017, and this popular hostel might be the harbinger of a future revitalised old town. 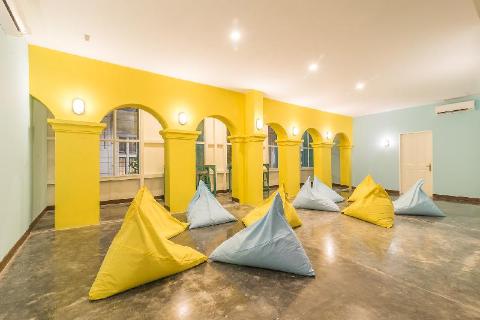 Mercure Jakarta Batavia is also here, with a good location by one of the canals. 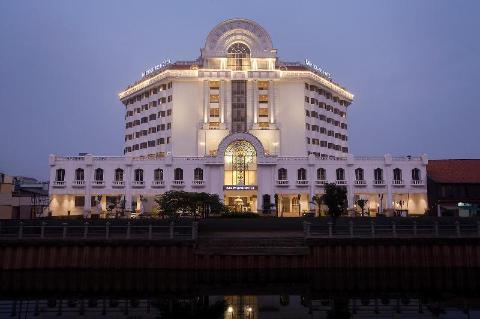 Jakarta is slowly but surely getting its infrastructure act together, and with new train lines and stations opening it will make more areas appealing to stay in.

This is not a recommended area yet, but I have this one my watch list for when the new Manggarai central station is completed in 2021. The current long distance train station at Gambir will be moving to this new super station that will be a hub for long distance railways, commuter lines, and the airport train. The station will be almost as big as the new central station in Bangkok, and it will include a shopping area and a 5-star hotel.

I will be interested to see if the surrounding area is going to be developed with new hotels, which would make Manggarai a convenient place to stay in the future.

For long-termers and expats – Kemang

If you are just visiting Jakarta then I wouldn’t stay here as it’s too far from the main tourist sites. I mention Kemang in South Jakarta as it’s one of the popular expat neighbourhoods, so if you are reading this looking for where to stay long-term in Jakarta then this is your area.

A good reference point is the shopping centre at Kemang Square. Grandkemang Hotel is nearby this area. 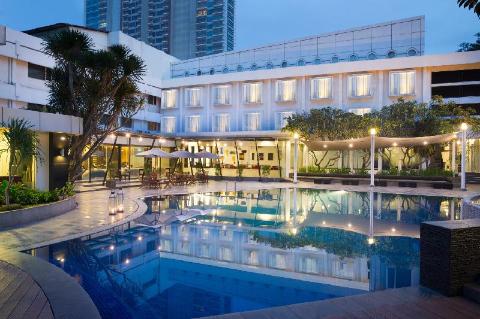 Another option for Kemang (especially if you are hunting around for apartments) is to stay at an Airbnb in Kemang. If you are new to Airbnb you can get a credit towards your first stay by using this link.

Hopefully this information will improve your stay in Jakarta.