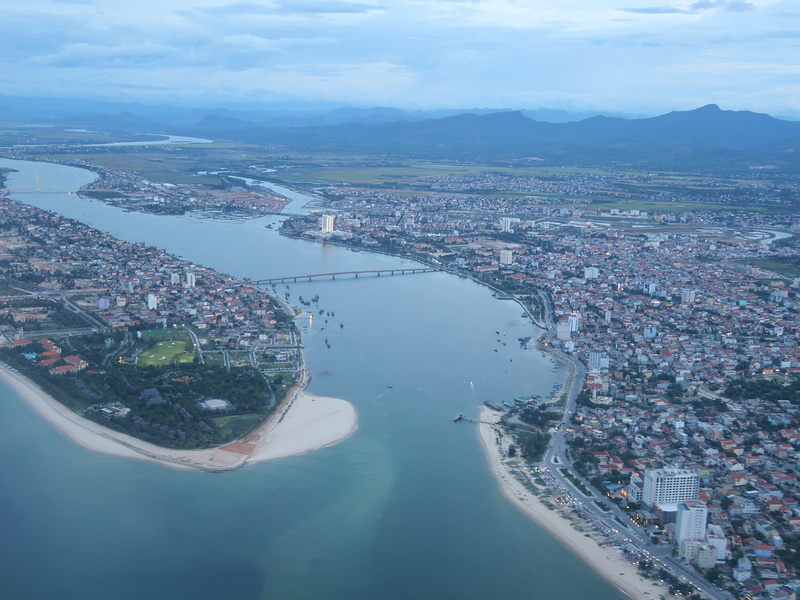 Dong Hoi is the gateway city for travel to the UNESCO World Heritage Phong Nha – Ke Bang National Park. Most visitors to Phong Nha go straight through Dong Hoi, and I nearly did as well. After spending a day looking around though, I think Dong Hoi might be a place you’ll hear more about in the future.

The city has a geographically physical resemblance to Da Nang, which has been undergoing a major tourism boom over the last decade. Dong Hoi kind of reminds me of what Da Nang was like before the boom, 10 years ago.

I was in Phong Nha visiting my friend at his farmstay, and he said I should have a look around before my flight. I hadn’t planned to visit Dong Hoi so I didn’t do any research beforehand. I knew one thing about Dong Hoi, and that was the ruins of the Tam Toa church. 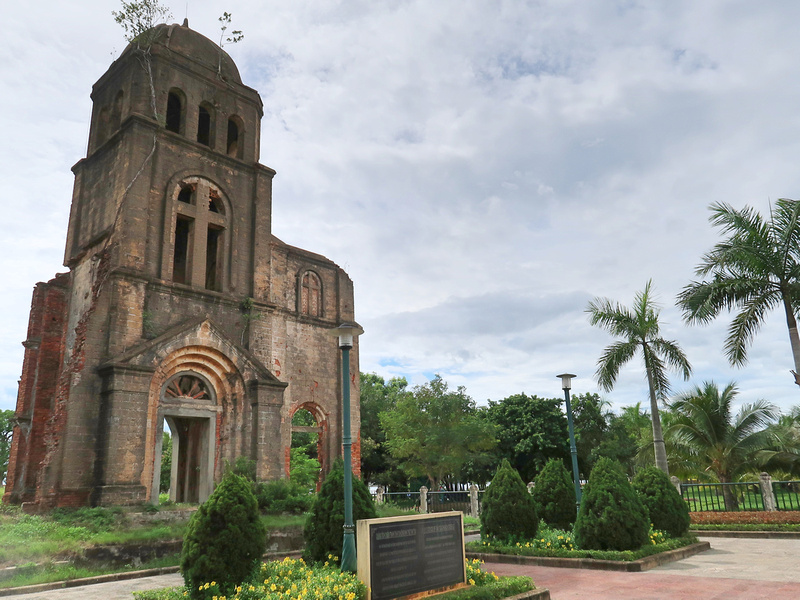 Dong Hoi is the capital of Quang Binh Province, which is to the north of the former DMZ. As such it was heavily bombed during the war. The city centre was pretty much destroyed, with the charred remains of the church being all that was left of the old city. It now stands a monument to the war, reminiscent of the Kaiser Wilhelm Memorial Church in Berlin. 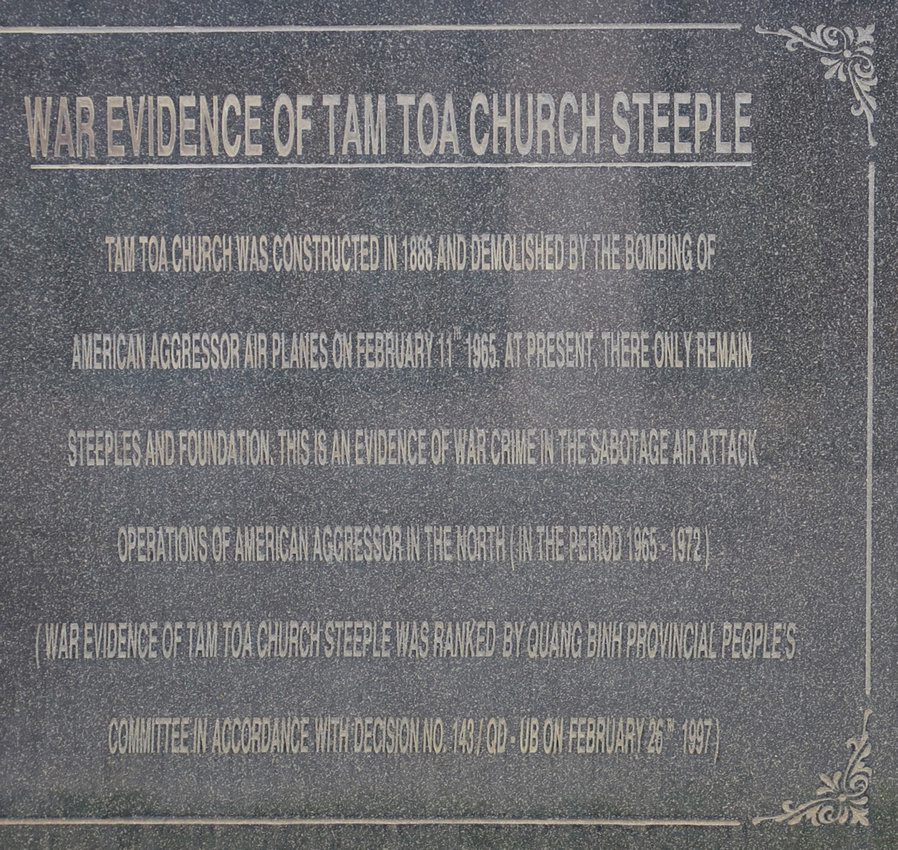 I started my tour near the church at the Tree Hugger Cafe. My Man In Phong Nha contacted his Man In Dong Hoi and arranged for him to meet me there and guide me around. 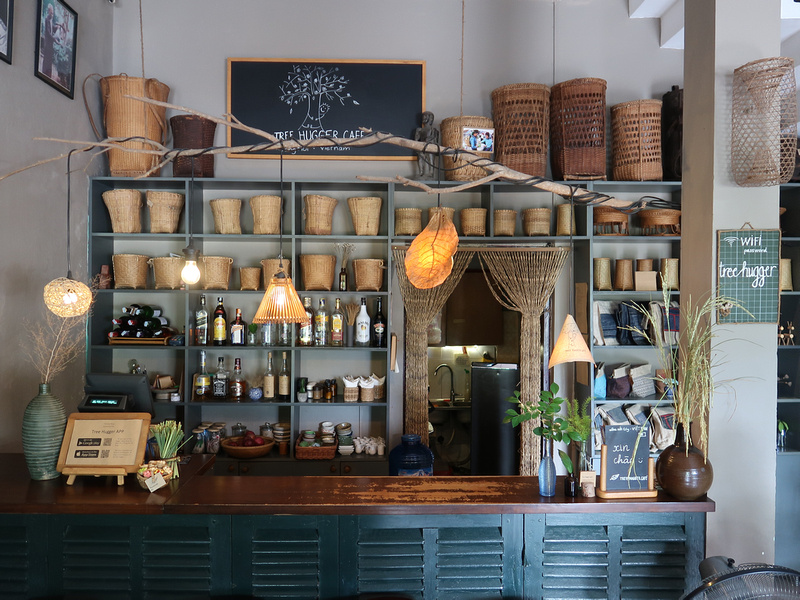 I wasn’t expecting such a cool cafe in a provincial city, so this was already a good start to the day. Sometimes it’s good to go into a city not knowing anything about it.

The cafe is on a pleasant road facing a park on the river, and I could imagine in the future this stretch of road becoming more popular. 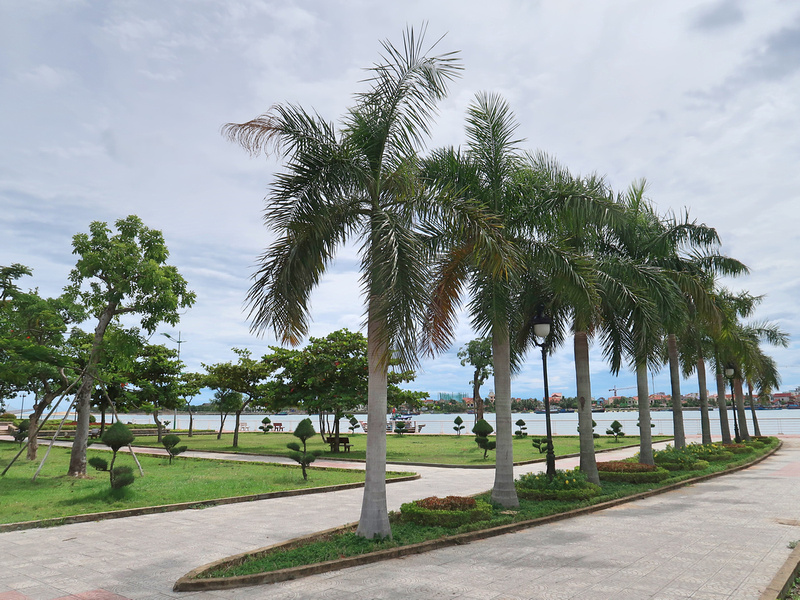 I hired a bike and followed my guide Tung around to some of the highlights of the city.

I noticed on the map that there is a citadel-shaped block in the city centre.

[Map of Dong Hoi with places mentioned in this post.]

In a case of what might have been, Dong Hoi once had a citadel that may have put it on the tourist map up there with Hoi An and Hue. Today all that remains of it is the moat that outlines its shape. 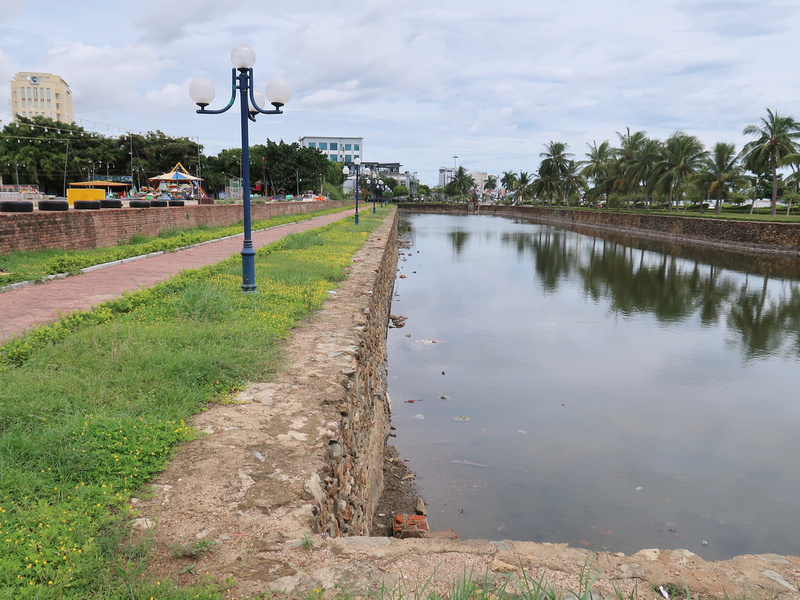 There is a reconstructed gate and a stone bridge that gives a little hint of what it might have looked like. I haven’t found any useful resources online of old Dong Hoi, so I will keep looking for that. (Note to the internet: I’m looking for “photos of old Dong Hoi” / “photos of Dong Hoi before the war”.) 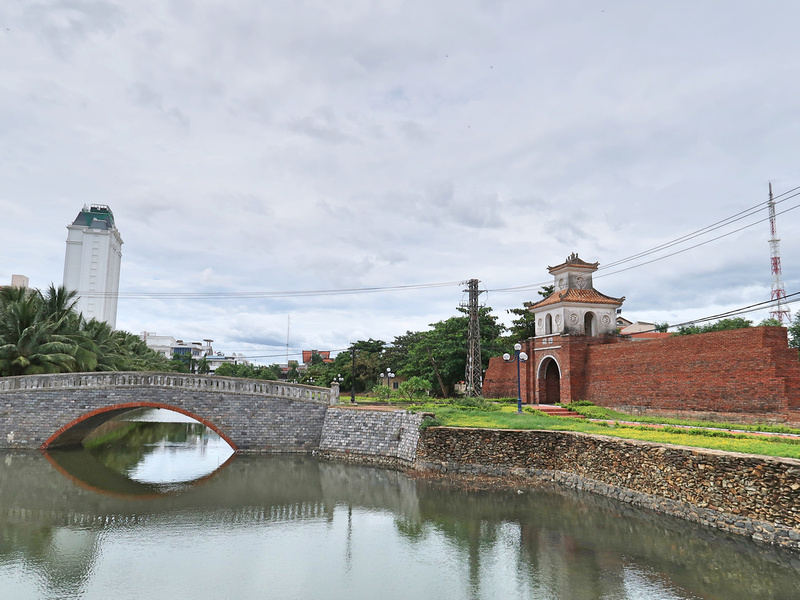 Inside the citadel is the newly renovated Quang Binh Province museum. 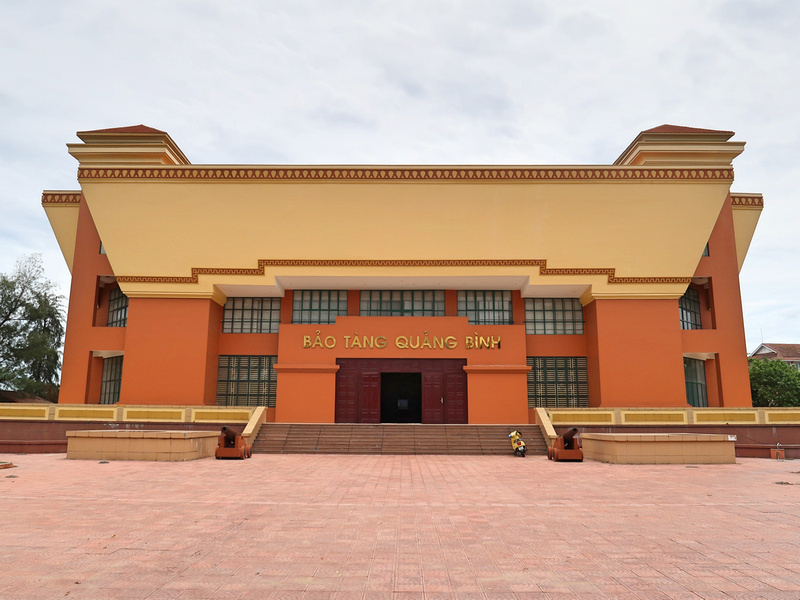 It features history of the war, and there is military hardware on the property. 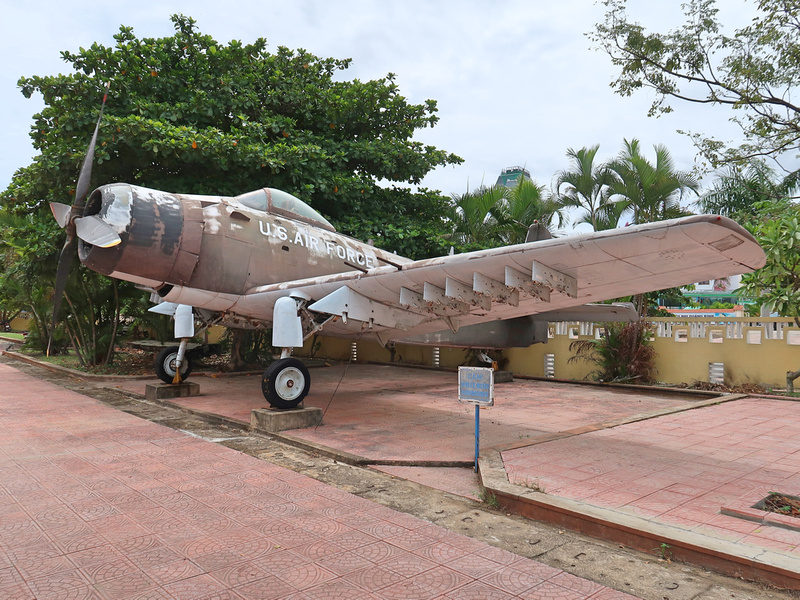 Outside the moated area there is a remnant of the citadel gate. 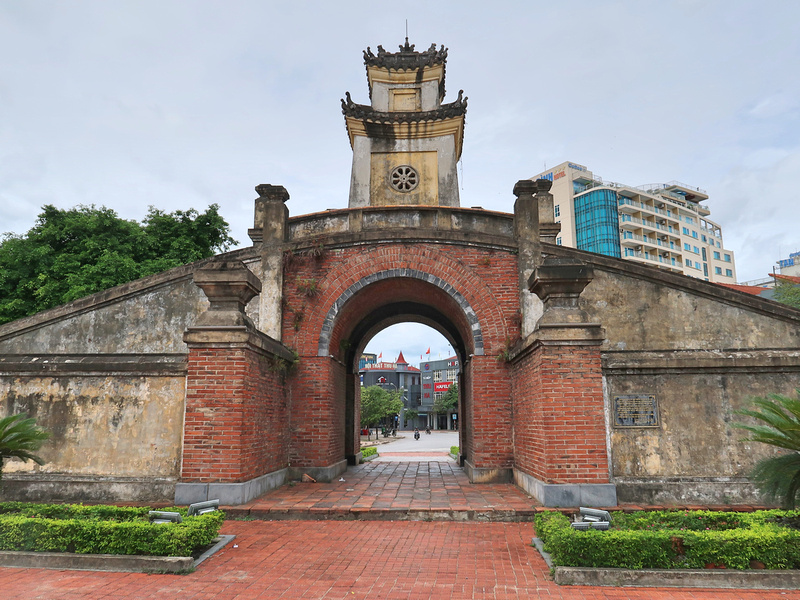 Another cafe on the riverfront is Sia Gon Cafe. I wanted to see it just to see what a Saigon Cafe looks like in Dong Hoi. It’s a garden cafe next to the Saigon Quang Binh Hotel. 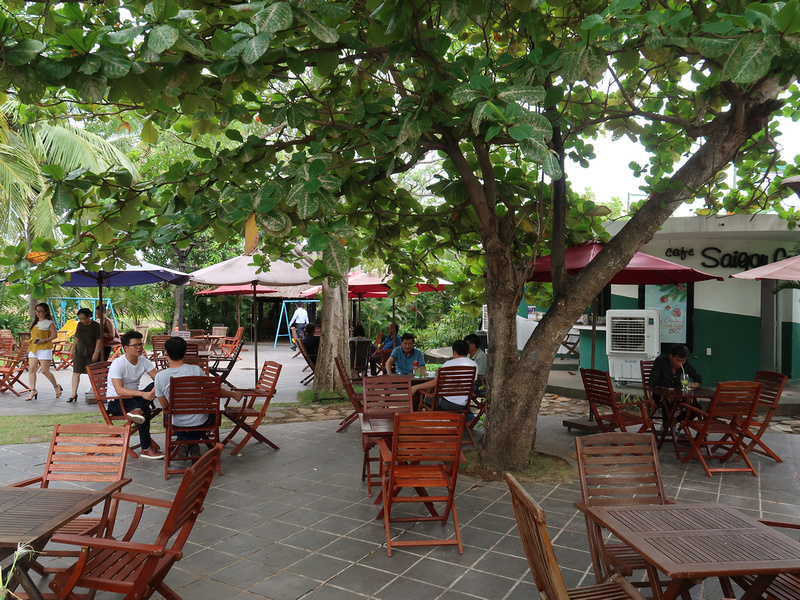 Another war monument to see is the Mother Suot statue. 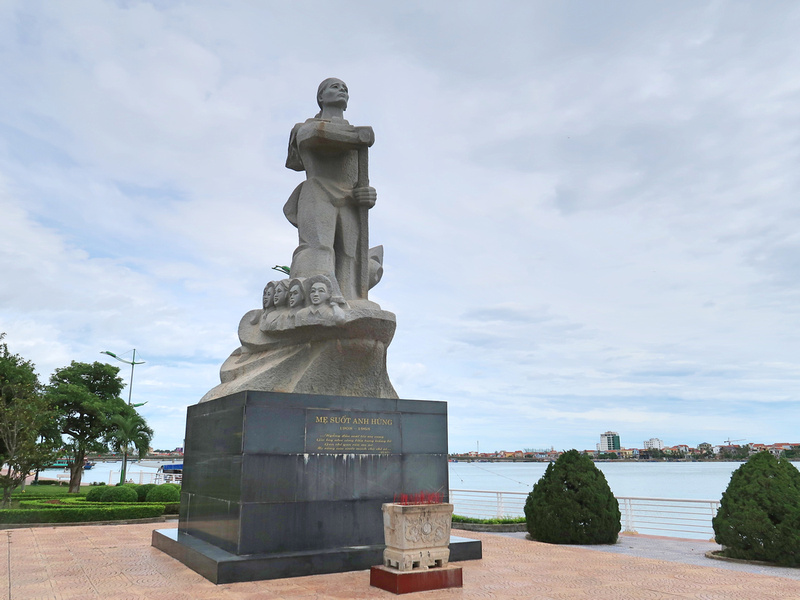 Mother Nguyen Thi Suot used a small wooden boat to ferry soldiers and supplies across the river during the war. She was killed in 1968 at age 62 during one of the U.S bombing raids of the city. The monument features faces of young soldiers on the side of the boat. 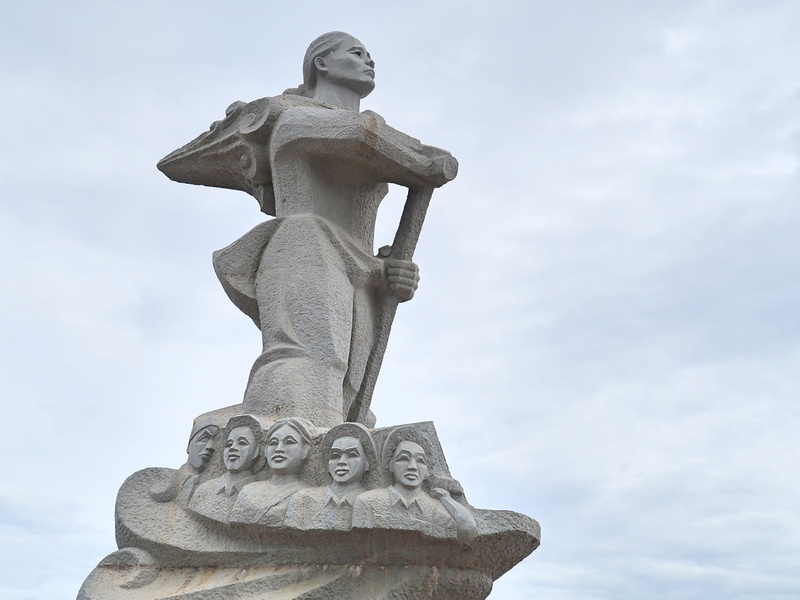 I said that Dong Hoi reminded me of Da Nang due to its geography. Here is a map of the two cities at the same scale.

Both cities have two waterfronts. The business side of the city is on the river, while the leisure side is on the sea. Dong Hoi also has mountains in close proximity to the city. 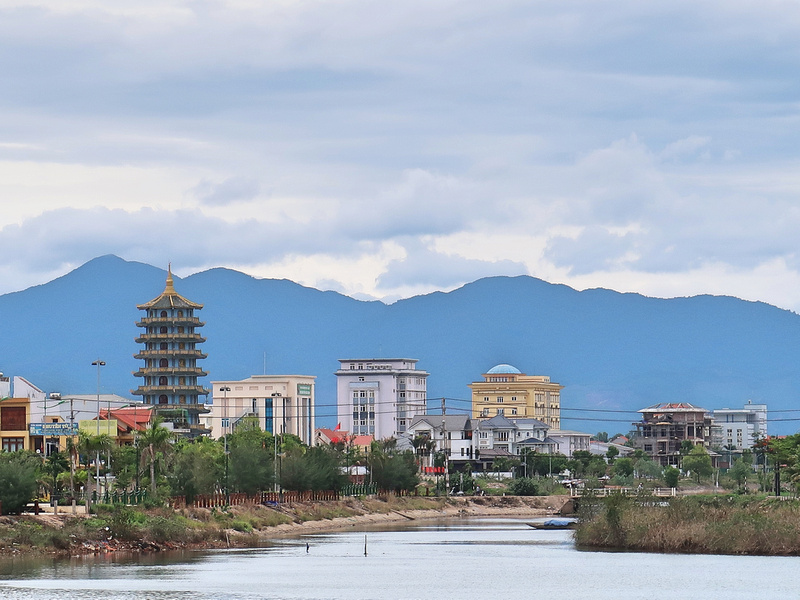 When I was flying out I got the perfect view from my window to show what the city looks like. 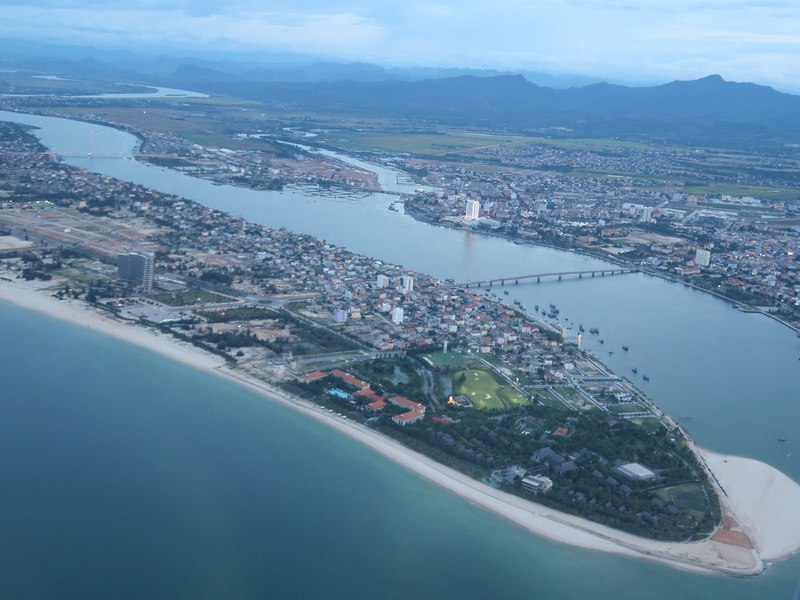 On the riverfront in Dong Hoi is the main market (like in Da Nang). 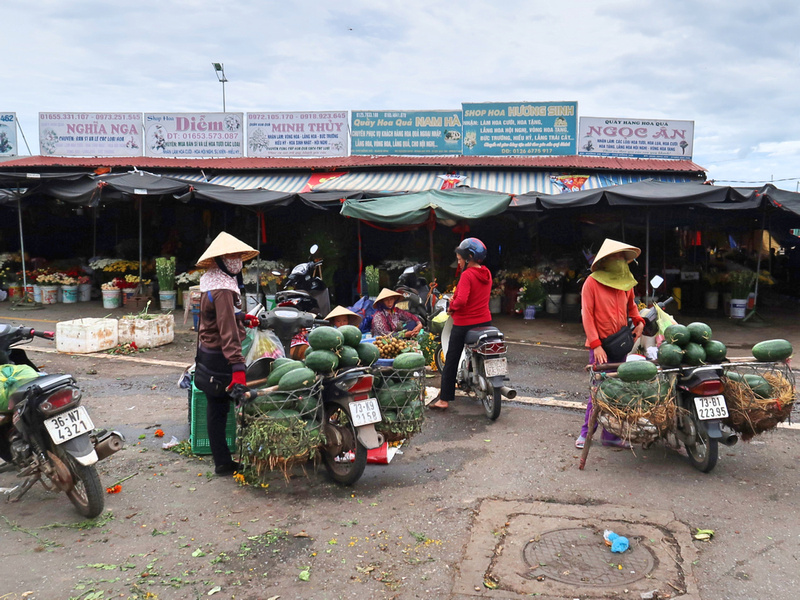 And there are now some tall buildings going up along the riverfront, such as the Vincom Tower. 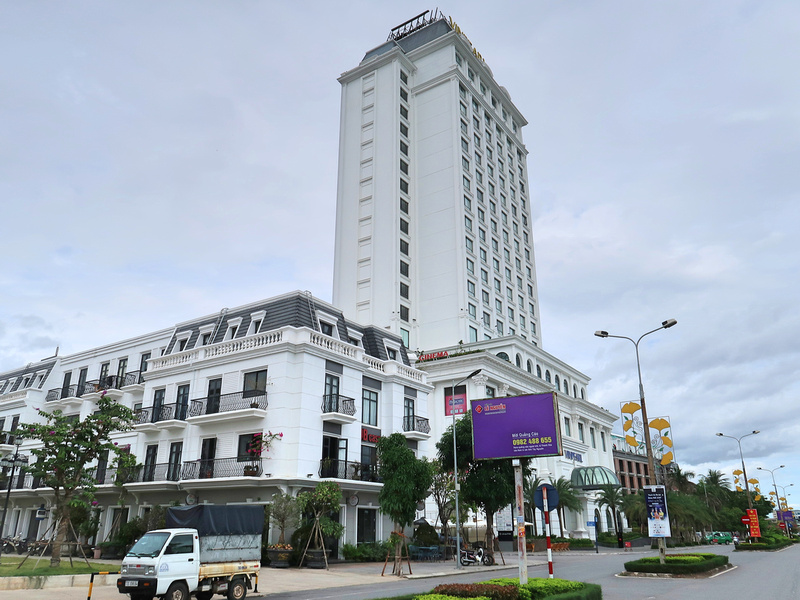 It’s on the seaside of Dong Hoi that you will see how Dong Hoi might become a new tourism hotspot.

From the river you can see one of the big projects already underway – The Pullman Quang Binh. Along Bao Ninh Beach there are a number of hotel projects under construction, and I have made a list of them on my article about Future Dong Hoi. 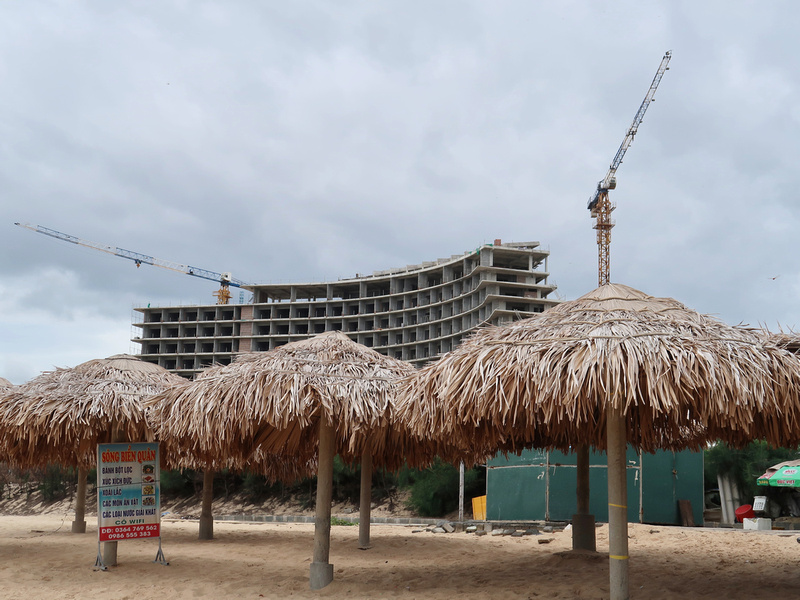 Before Da Nang got supercharged with developing its coastline, most of the seafront was empty lots. Dong Hoi reminds me of how the seafront of Da Nang looked like before the seafront hotels started replacing the makeshift seafood restaurants.

I was there on a cloudy day and there was some rain about, so these pictures don’t really do justice of how nice the beach and sea is on a sunny day. 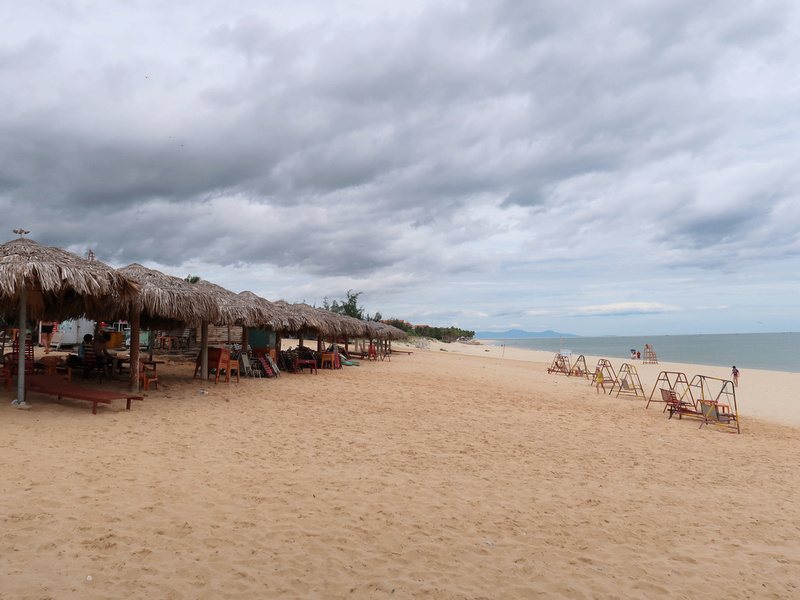 We went back into town via a one of the new bridges that connects the city to the beach area. It was good to have a local guide who was so passionate about his home city show me around. 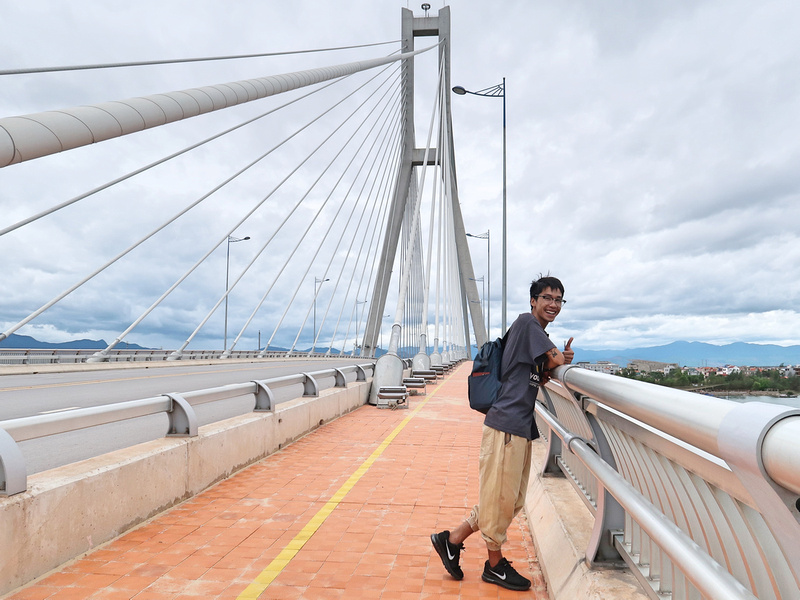 My friend in Phong Nha says he feels like he’s in a big city when he goes to Da Nang. For me it feels like a laid-back provincial town, but after the being on the quiet streets of Dong Hoi I understand what he means. 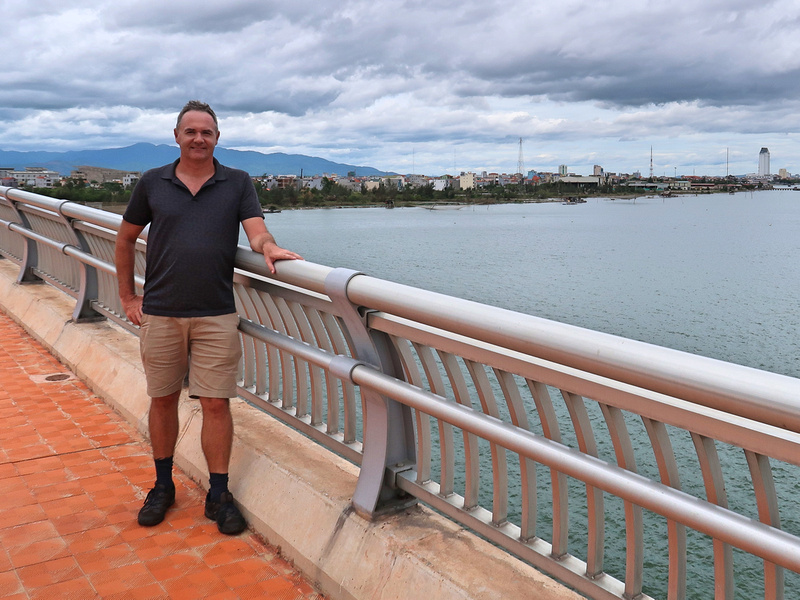 North of the city centre is Nhat Le Beach. This area is lined with seafood restaurants and small hotels. The airport is near here as well, so there is no chance of tall buildings being built within the flight path of the airport. 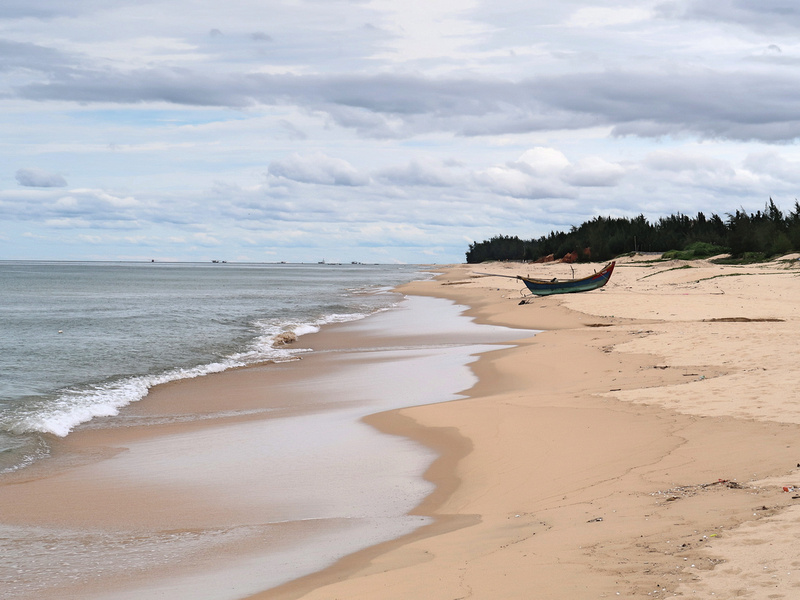 Tung took me to one of his favourite cafes by the beach, the Bayhops Cafe. 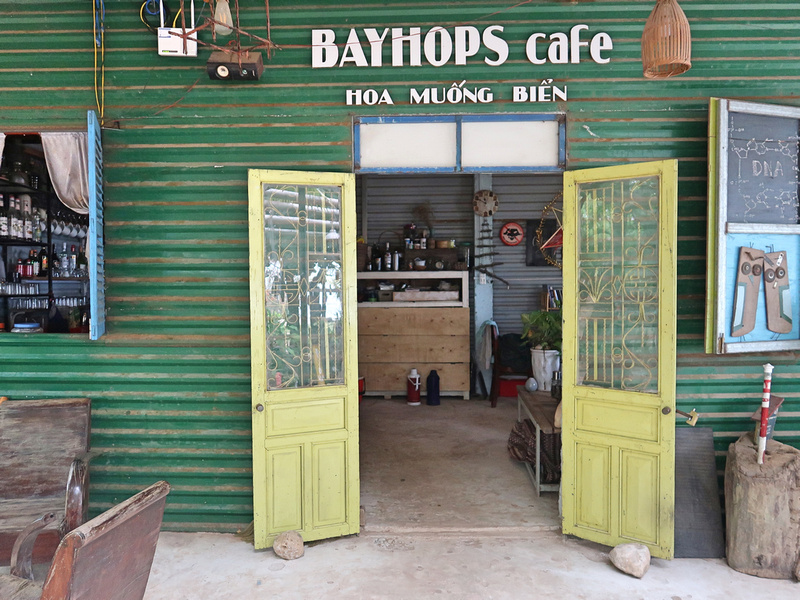 Bayhops Cafe is a true beach shack cafe, with seats looking right over the beach. 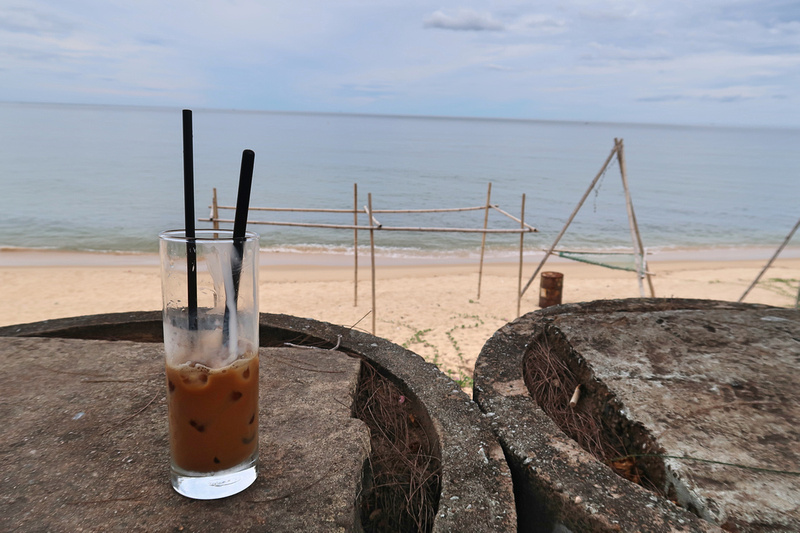 So something is happening in Dong Hoi, but I am not one to make predictions of where it is heading. There are factors that aren’t known to the public, such as government policy for regional development. There are no international flights here, and only a handful of domestic flights per day.

Having said that, Jetstar Pacific was a few years ahead of the curve when it launched direct flights from Dong Hoi to Chiang Mai in 2017. The idea was that it was going to turn Dong Hoi into an adventure capital with the Phong Nha National Park, as well as being an accessible beach for Northern Thailand. 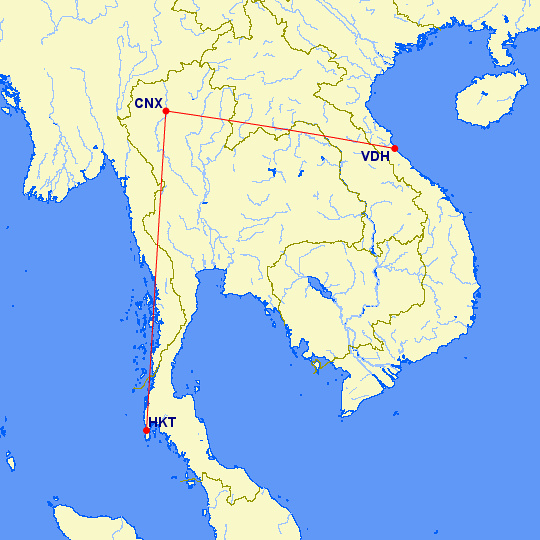 According to the Great Circle Mapper, Chiang Mai is closer to Dong Hoi than Phuket.

It wasn’t a bad idea, but it was hardly marketed in Chiang Mai, and Dong Hoi/Quang Binh isn’t exactly a household name yet. It didn’t help that the visa on arrival situation in Dong Hoi wasn’t set up with online visa providers. 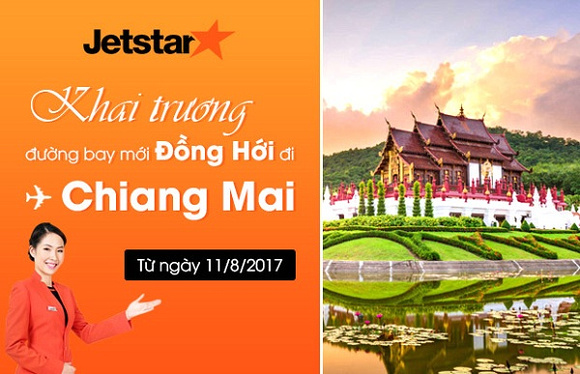 Earlier in 2019 AirAsia launched direct flights from Chiang Mai to Da Nang, so maybe in 10 years the market will be ready for another crack at a Chiang Mai to Dong Hoi flight.

Dong Hoi remains a domestic travel destination for now, but with so many hotels in the pipeline they would have to look at opening international routes. It might be the case that expanding airlines like Bamboo Airways will run out of landing slots at Hanoi and Saigon, so they will be the ones to develop new regional tourism markets. Here is more information on the current Vietnam aviation market. 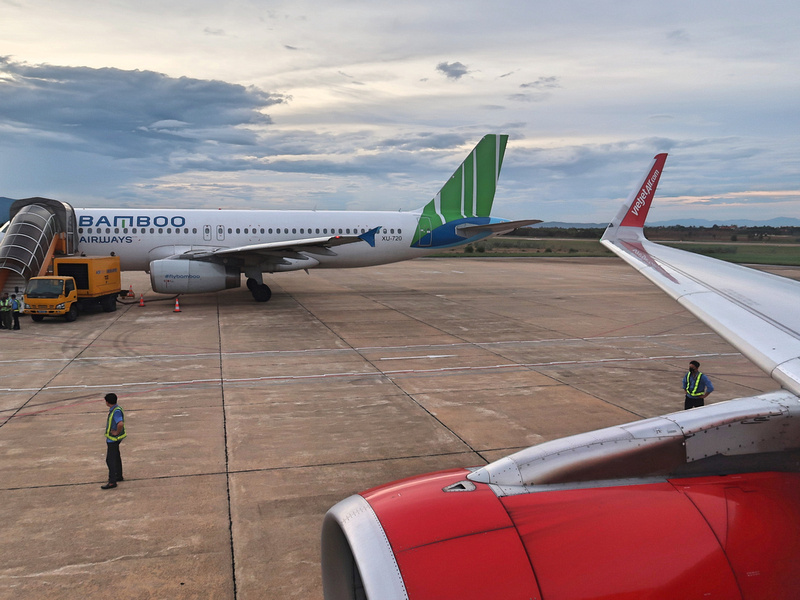 Improvements in overland speed would also help make Dong Hoi more accessible. I arrived in Dong Hoi by train from Hue. The 166.8 km journey took 3 hours and 20 minutes, making it an average speed of 50km/h. If the proposed railway upgrade ever goes ahead, the speed would be between 160km/h to 300km/h (depending on how fast they decide to upgrade). 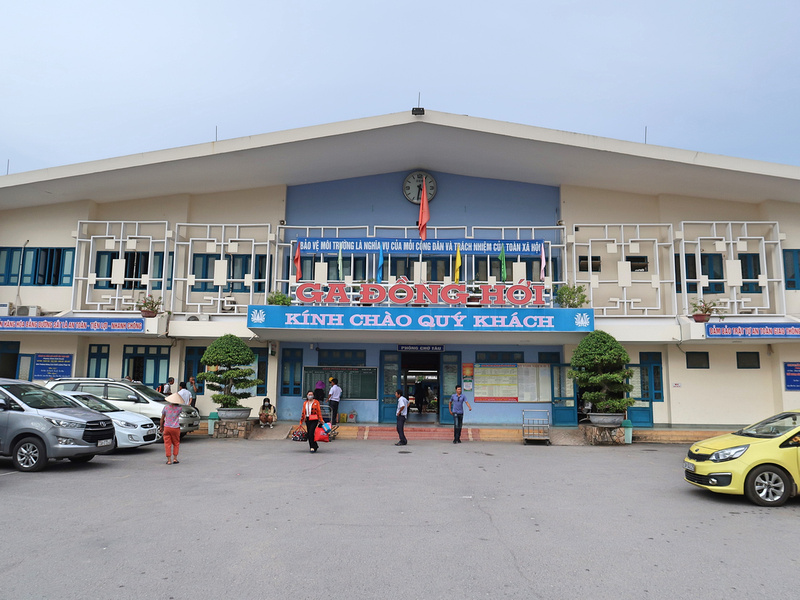 I have heard people lament about how Da Nang has changed and it was better before it was developed. “You should have been here 10 years ago” is a catchcry heard across the region. I personally like the idea of city life by the sea, but if you prefer a quieter pace then get up to Dong Hoi and enjoy it before it gets Danangafied.