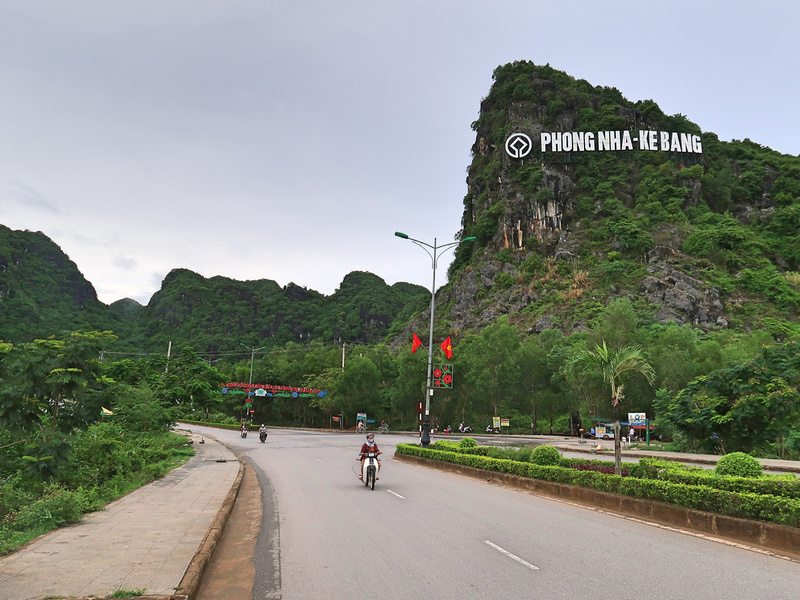 Phong Nha is in the North Central Coast region of Vietnam in Quang Binh Province. The area is home to the Phong Nha-Ke Bang National Park, which is often referred to as the Phong Nha Caves. For reference here it is on the map.

This national park was listed as a UNESCO World Heritage Site in 2003. The park includes over 300 caves, including Son Doong Cave (the world’s largest known cave). 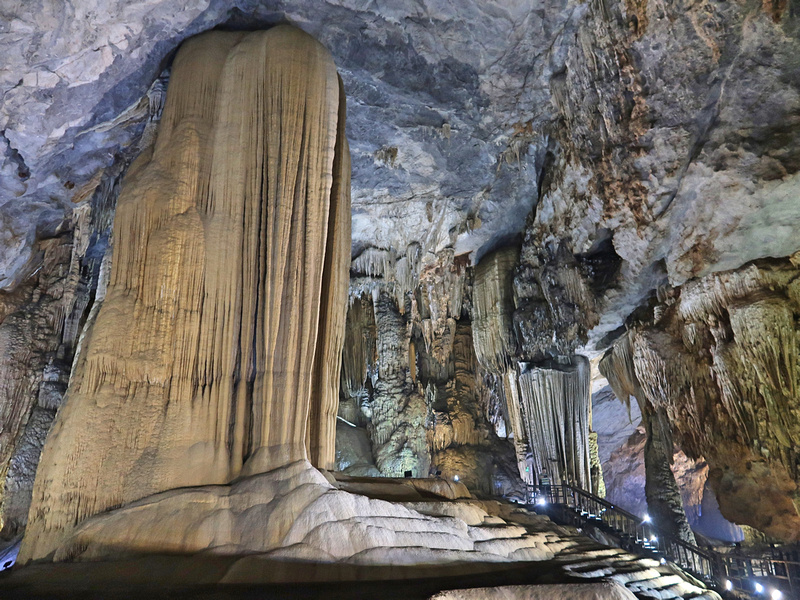 [Inside the Paradise Cave.]

Phong Nha and Quang Binh Province is a place of such natural beauty that it’s worthy of a visit even without the caves. It’s only been recently though that the area has started realising its tourism potential. When I first visited Vietnam in 2005 it wasn’t offered as an option on the open bus tickets that cover the length of Vietnam. 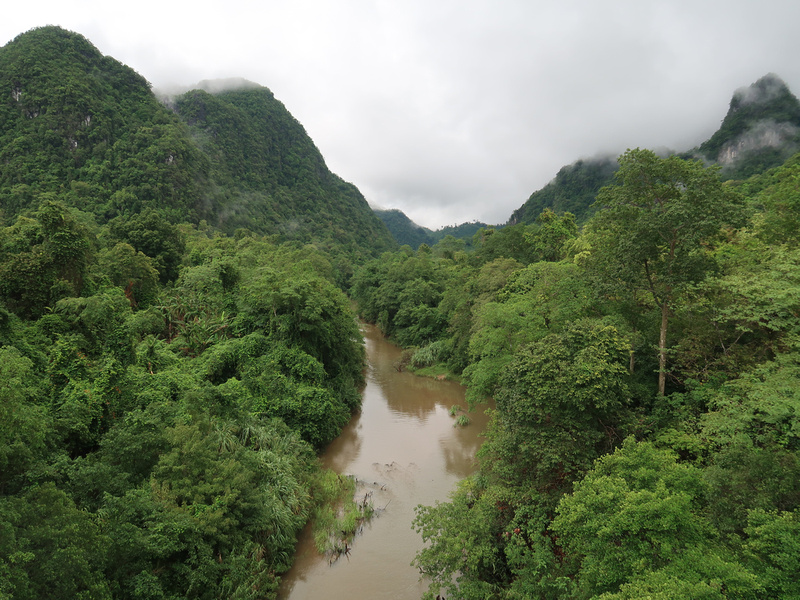 Even with the UNESCO listing it took a while to open up. While the Son Doing Cave was discovered in 1991 it was not explored until 2009. Things started changing after then, with Phong Nha getting on the world travel map. It’s now a regular feature on international news sites like CNN and BBC.

One of the people that helped open Phong Nha to tourism is Ben Mitchell. I stayed with Ben at his farmstay, and as I mentioned previously we are long-distance relatives and grew up in the same area in Australia.

Ben was travelling around Vietnam when fell in love with the land and a lady, though in which order I didn’t ask. Ben moved to Phong Nha in January 2007, and used that as a base while he was still doing contract construction work around the world.

He and his wife Bich started a farmstay at Bich’s parents house in 2008, and they moved to the current site in 2010. Since then they have opened up Easy Tiger Hostel in 2013 and Victory Road Villas and Shambalaa Hostel in 2017. 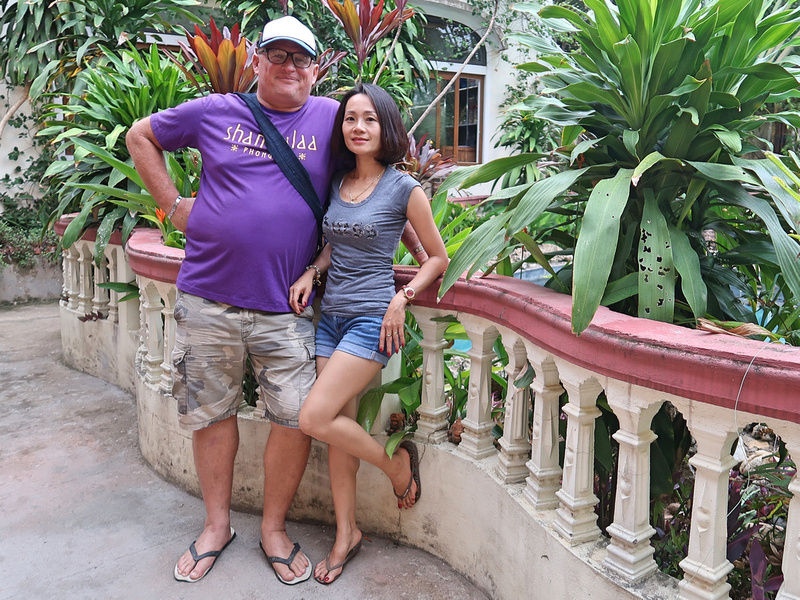 Ever since that Kevin Costner baseball film came out in 1989, businesses have been paraphrasing the line “if you build it, they will come”. Certainly there are businesses that have flourished from pure word-of-mouth alone. In the case of getting tourists to Phong Nha though, it took more than just building a dream farmstay in the rice fields.

When I was first in this part of the world in 2005, buses weren’t allowed to stop in Quang Binh Province. They could only stop in Hue and then the next stop north was Ninh Binh. Those who did stray off the trail had to backtrack back to Hue to resume their journey, otherwise their bus ticket would be void. It wasn’t until 2013 that buses started offering the option to stop in Phong Nha. Before then, Ben would go looking for backpackers and tell them about Phong Nha, and he was the first to run tours to one of the main caves.

The phrase “travel influencer” is thrown around a lot these days by marketing agencies promoting Instagrammers. Ben is probably a better example of what a travel influencer is, as he helped re-route the Banana Pancake Trail to Phong Nha.

The Banana Pancake Trail is the route that is traversed by backpackers as they make their way around the highlights of Southeast Asia. Along this route there are hostels and guesthouses that cater for backpackers, where westerner-friendly food like banana pancakes can be found. In Vietnam this route is easily defined as it’s just one long trail along the coast of this long and skinny country. Phong Nha is now a stop on this route. 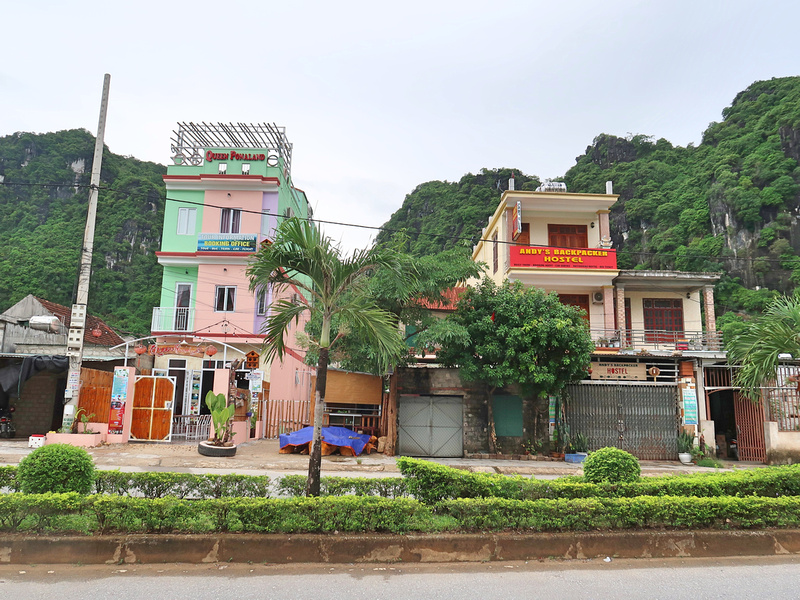 To be fair I think that Phong Nha was always going to be discovered, but by not being a big city on the main highway it took work to get it on the proverbial travel map.

For my visit to Phong Nha I flew to Hue first, and then got the train from Hue to Dong Hoi. Phong Nha is about 40 minutes drive inland from Dong Hoi. There’s also an airport in Dong Hoi which serves domestic flights.

From the farmstay I did an informal tour with Ben and two other guests, and we began by visiting some sites on the Ho Chi Minh Road. This mountainous region is so beautiful and I can see why he ended up staying here. 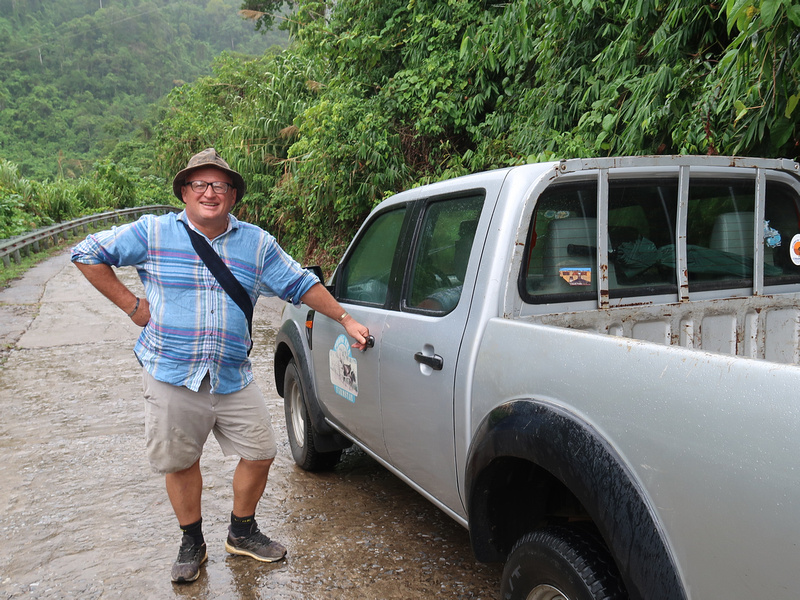 Quang Binh Province is to the north what was the demilitarized zone (DMZ), and it’s also at the skinny part of the country that is close to Laos. This strategic supply location for the Ho Chi Minh Trail made it one of the most bombed provinces in Vietnam.

These mountains have secrets, and if I came here alone I would have missed the stories that they hold. For example this unassuming mountain face is the result of American bombing during the war. 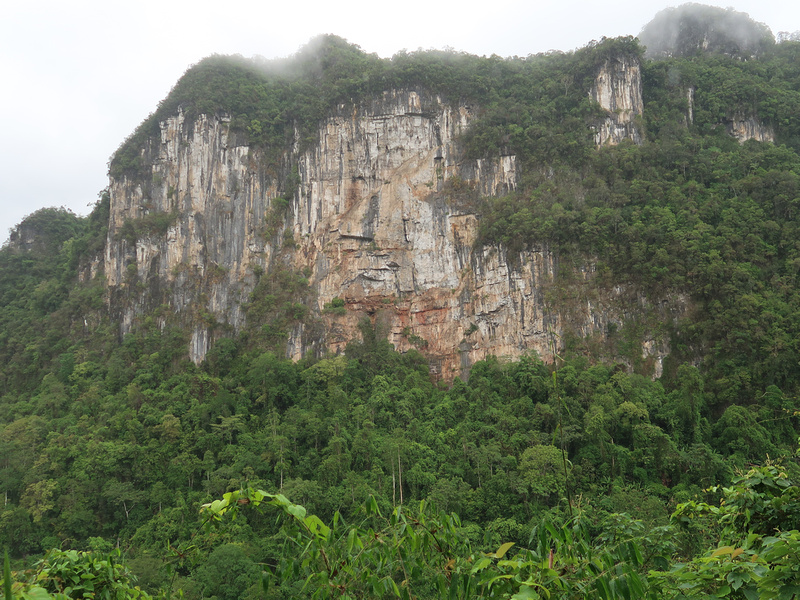 At the base of the mountain is a road that made up part of the Ho Chi Minh Trail. Debris from the bombed mountainside would block the way, and then volunteer workers would emerge from their hiding spots to clear the rubble after every bombing run. 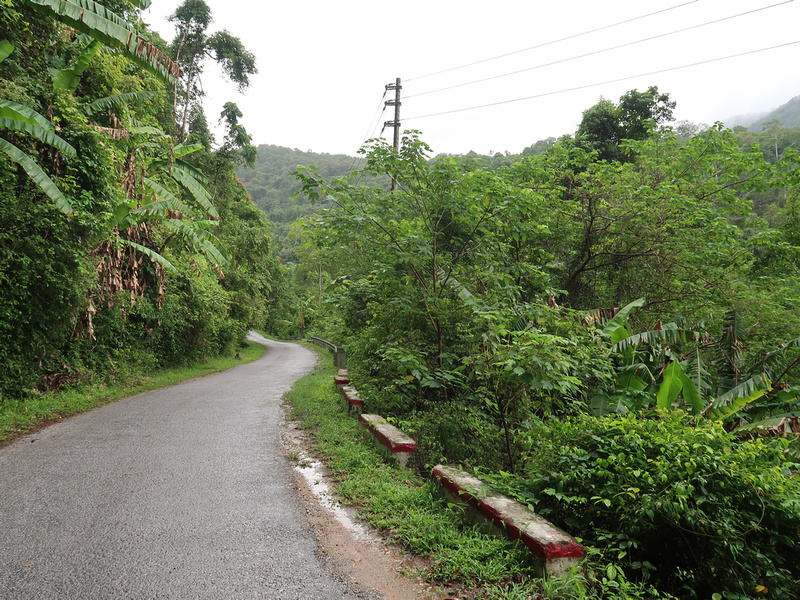 We visited the 8 Lady Cave, named after the volunteer youth workers of the Ho Chi Minh Trail who were entombed in the cave by bombing. 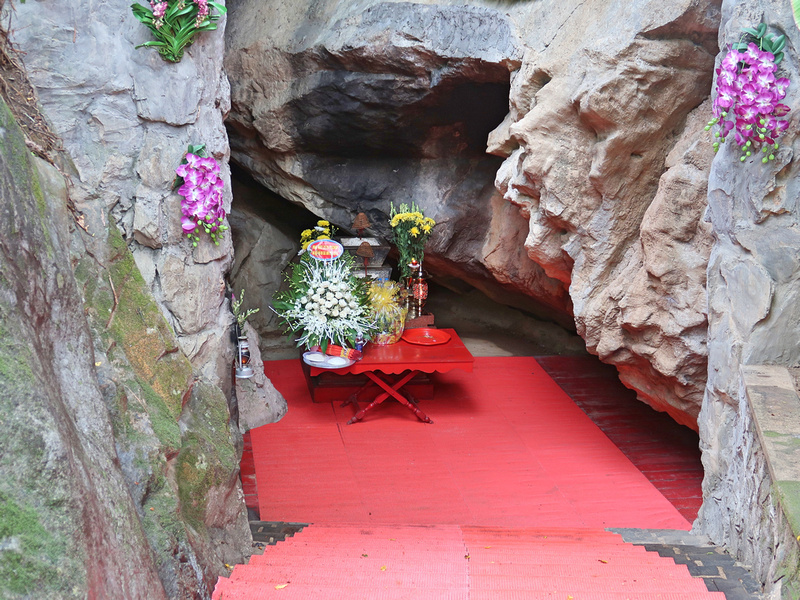 Also nearby is an impressive wall dedicated to the heroes of the Ho Chi Minh Trail. 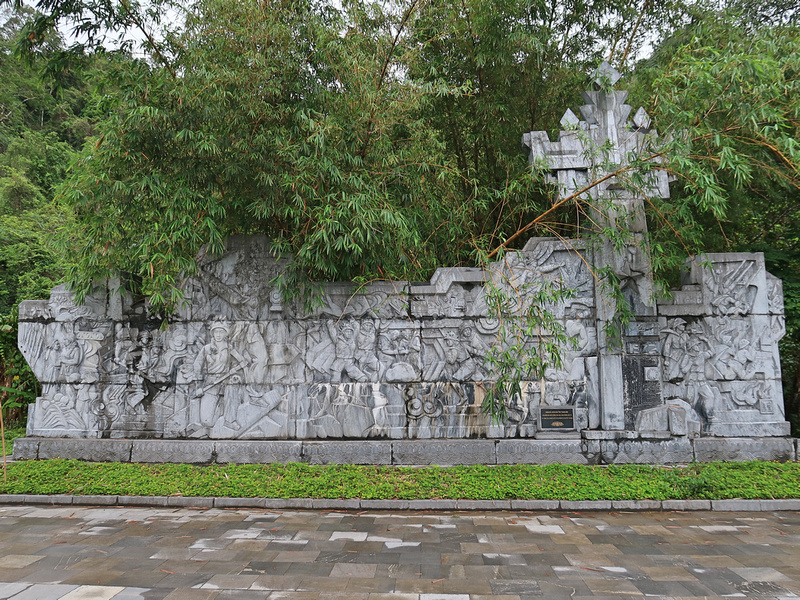 The highlight of the area are the caves, with the most famous being Son Doong Cave. At 69,800,000 VND ($3,000 USD) to go on the tour, the price is almost as famous as the cave itself. I’m not enough of a spelunker/caveophile to make me want to pay that much.

Personally I think that it’s good that there are regulated numbers going to the Son Doong Cave, but it should be a lottery or waiting list, rather than it being something exclusive for wealthy travellers. This is now happening in Indonesia, where visiting the Komodo dragons on Komodo will require a $1,000 entrance fee. I’m glad I went to Komodo when I did.

At least with Phong Nha, there are other caves to choose from that are more budget-friendly. I told Ben that I’m not interested in visiting any cave where I have to stoop down or crawl around. I’m the sort of person that will hit my head on a low beam in a stairwell, so the thought of bashing my head around inside a cave didn’t sound like a fun day out. Ben assured me that there will be no crouching down, so off we went to the Paradise Cave.

The admission here is a much more reasonable 250,000 VND ($10.80 USD), and the parking infrastructure here suggested that they get more crowds here than the more exclusive Son Doong Cave. 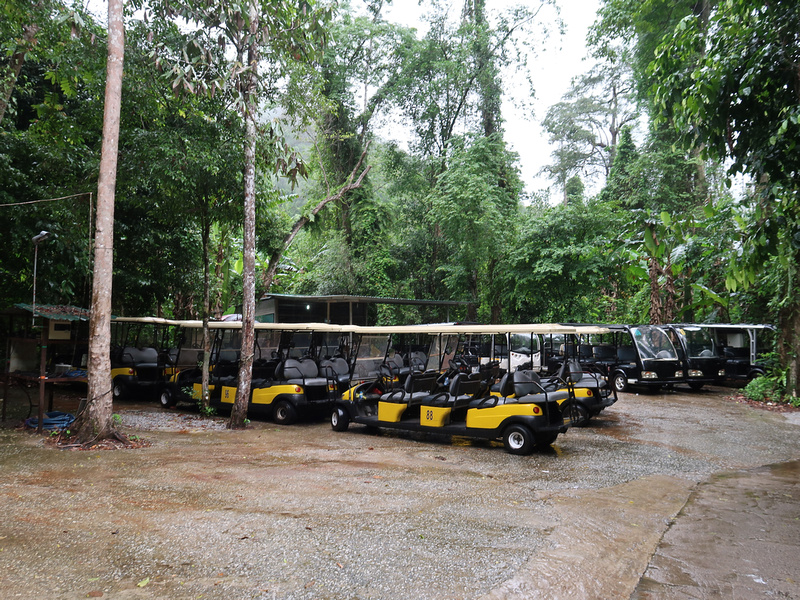 From the car park there are electric buggies that ferry you to the walking path, then there is a climb uphill to the cave entrance. 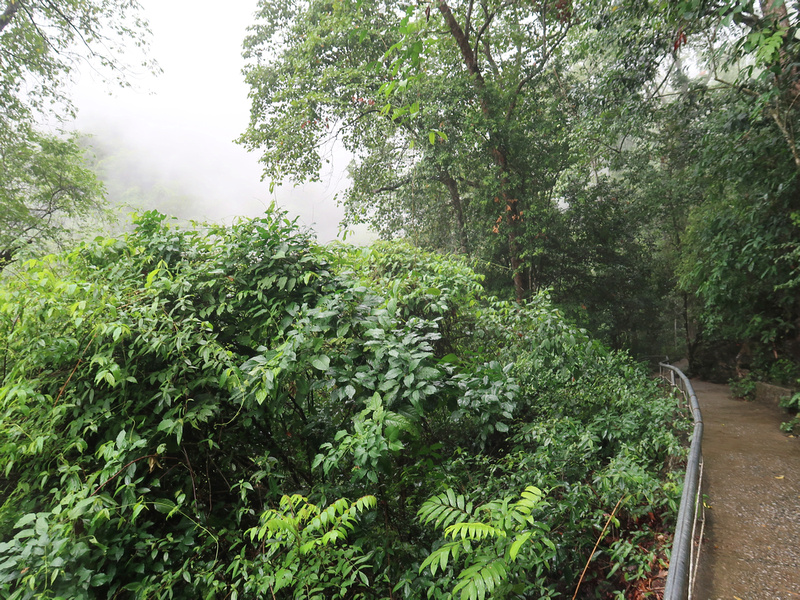 The entrance to the cave is an unassuming hole, which is part of why these caves remained undiscovered for so long. 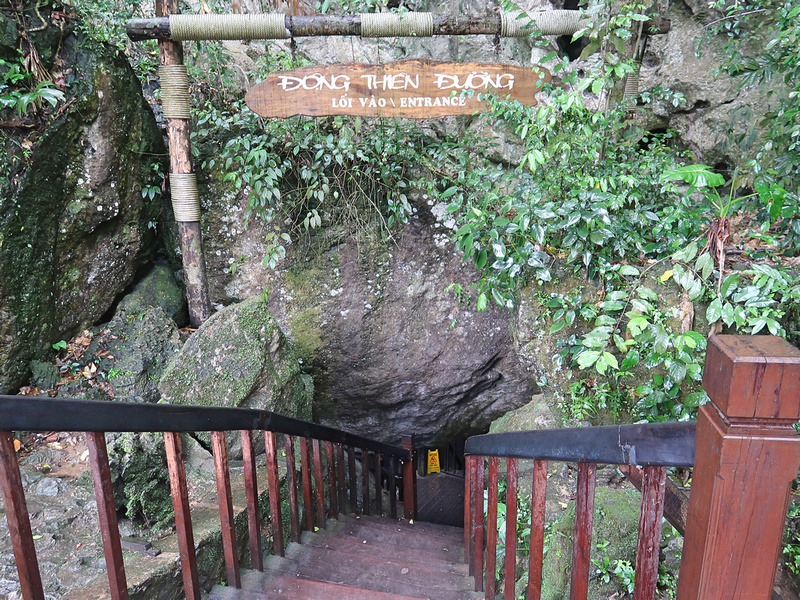 Once you enter the cave it’s a whole new world. I need not have worried about lack of space in here. 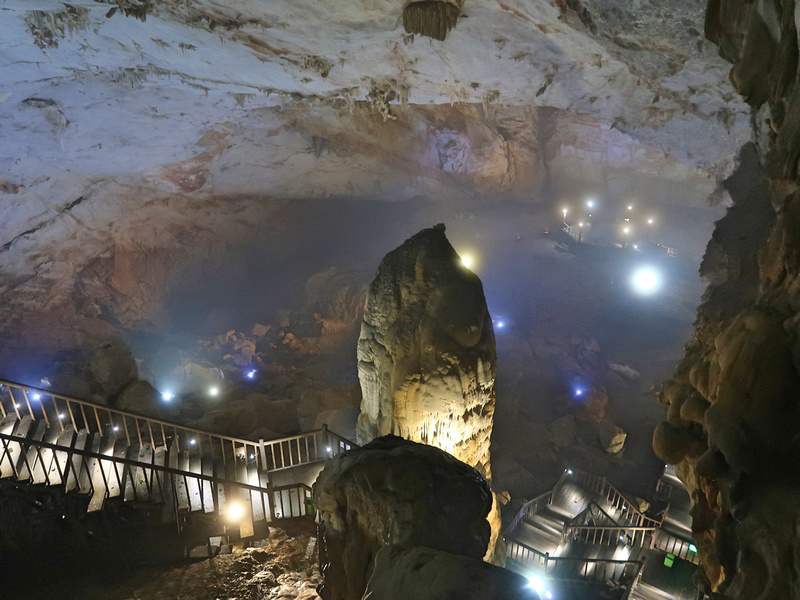 From the cave entrance there are stairs down to the cave floor, and there is 1km of boardwalk inside the cave. 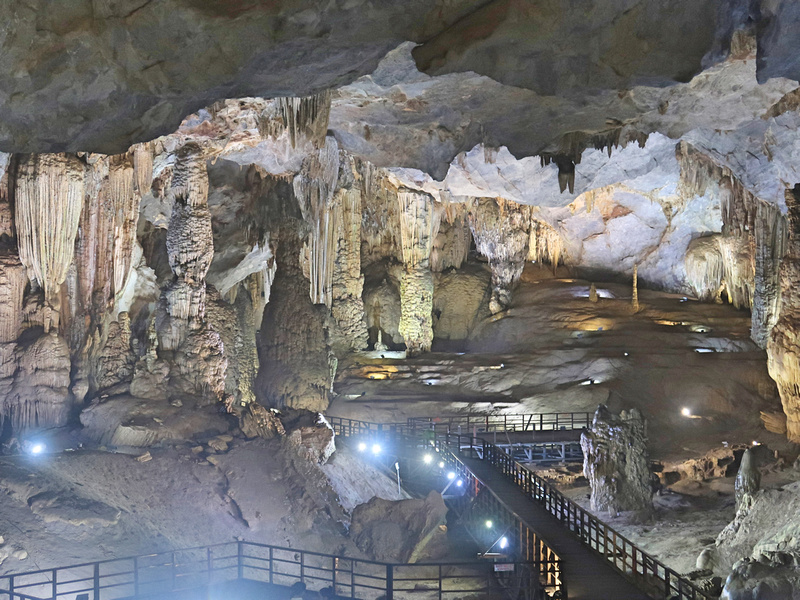 It’s a good walk inside the cave for the casual visitor, and if you plan ahead you can book a day tour that goes deeper into the cave system off. That goes off the boardwalk for about 4km. 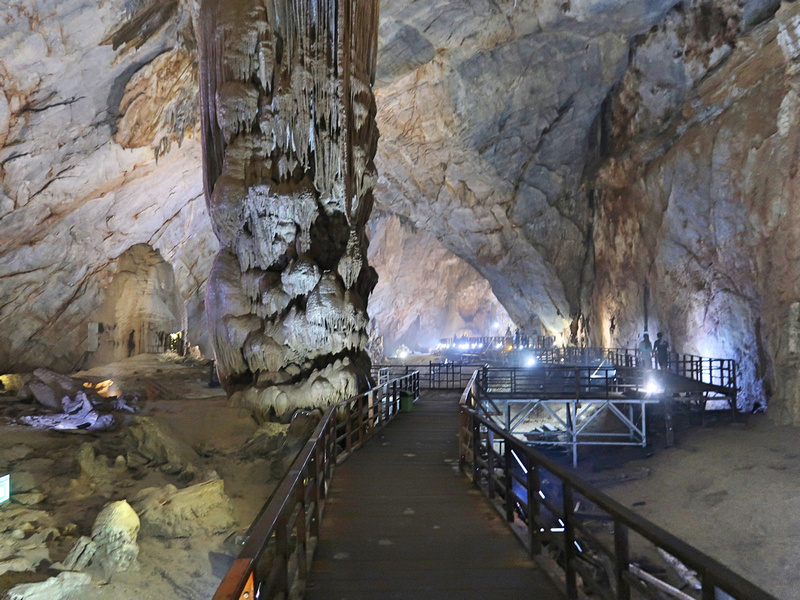 Apart from the caves Phong Nha is a popular stop for long-distance riders, which is also becoming an increasingly popular way to travel in Vietnam.

I wanted to do some riding around but I wasn’t feeling lucky with regards to the police. The week I was there the police were conducting a nationwide blitz on foreigners riding motorbikes. I saw reports in some of the expat groups of backpackers being stranded as their bikes were confiscated, so I stuck to the backroads. 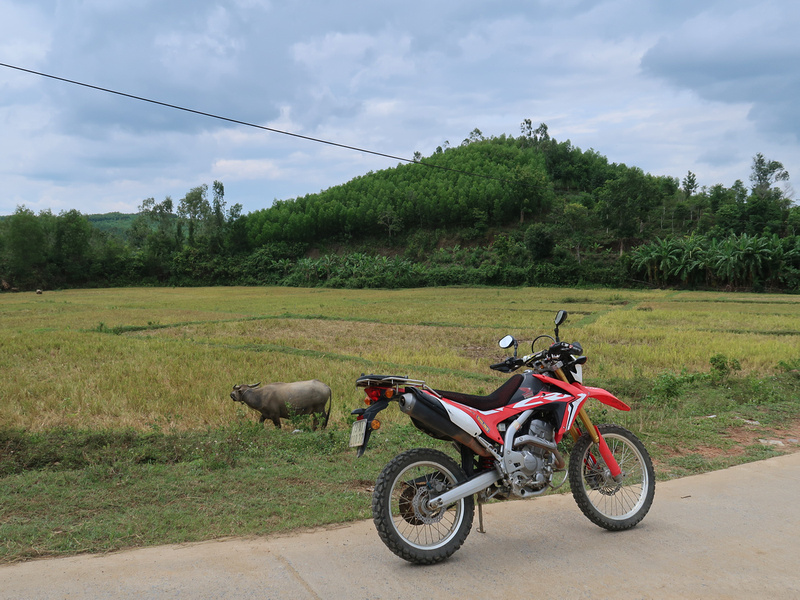 I was enjoying the rural atmosphere so much that I was happy to just around near the farm. 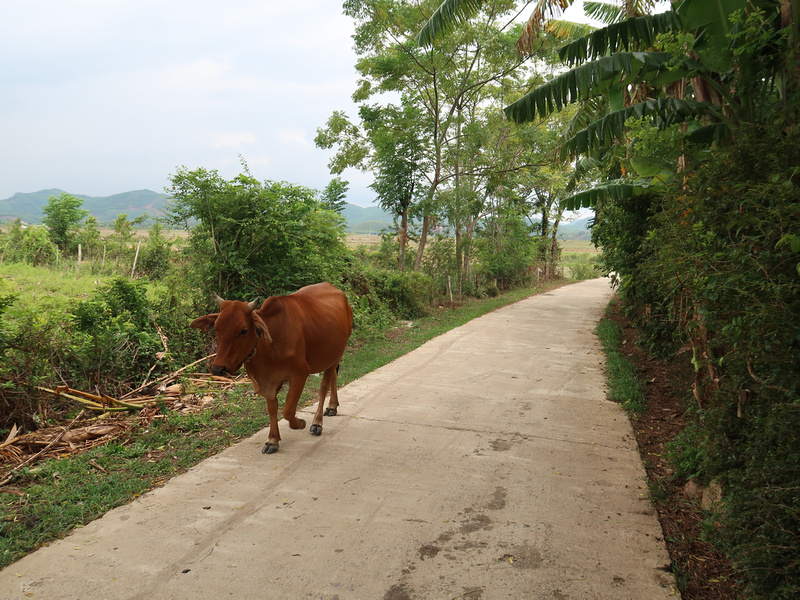 After staying at the farmstay I went and stayed at the Victory Road Villas. Phong Nha is a regular unassuming Vietnamese small town, and even though there is now an abundance of cheap guesthouses here it doesn’t feel like it’s been overrun. If you have been to Hoi An it’s nothing like that. 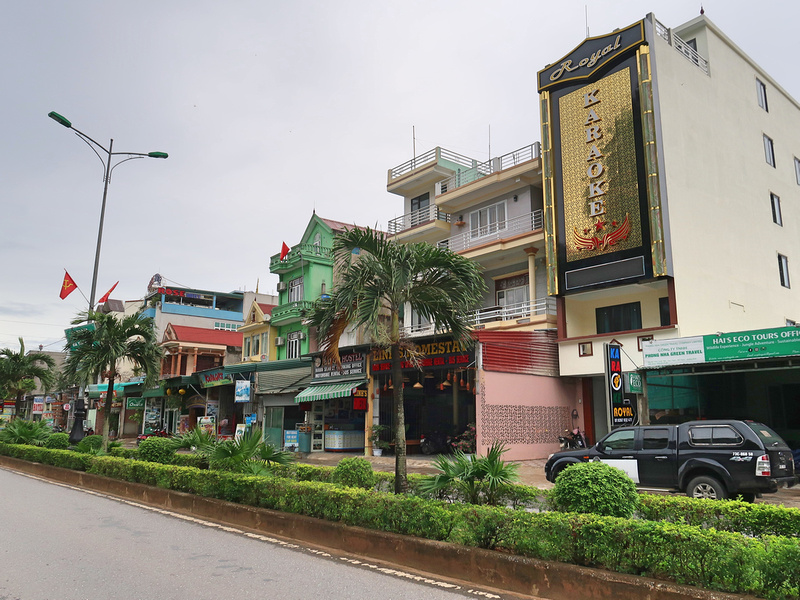 The town is mainly a base to organise day trips. You could spend several days here with the amount of activities that run from here. 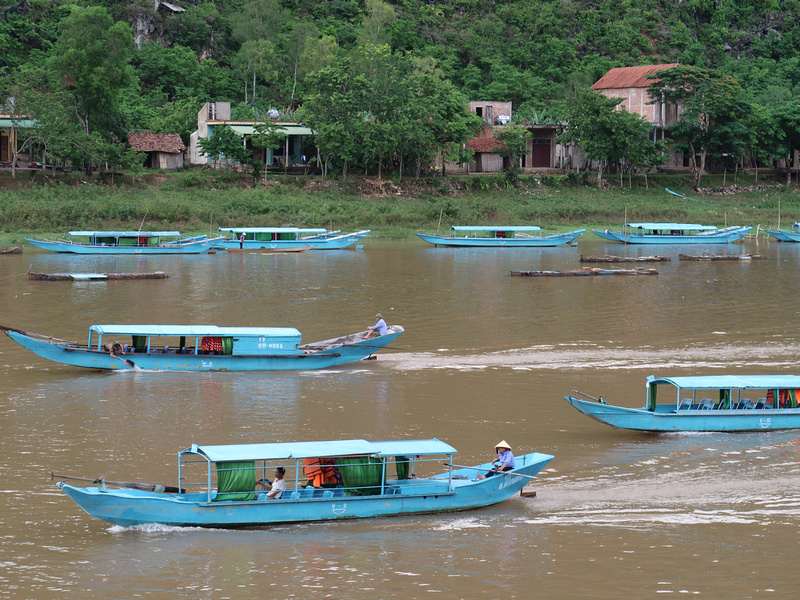 I visited the Easy Tiger Hostel, which is a party hostel that young James would have loved. Across the road they have their more chilled out hostel – Shambaala. 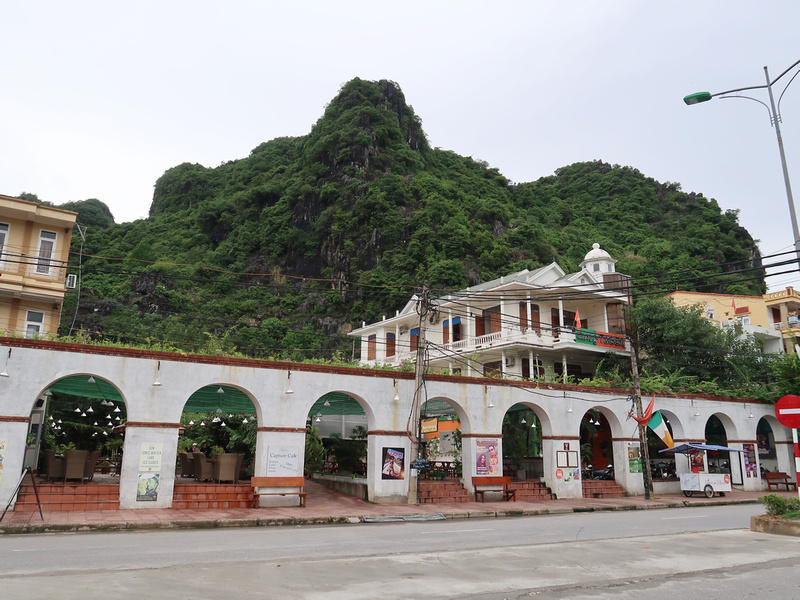 I turned up to the sports bar just in time to see my Australian sportsball team getting its arsed kicked for the last game of the season. 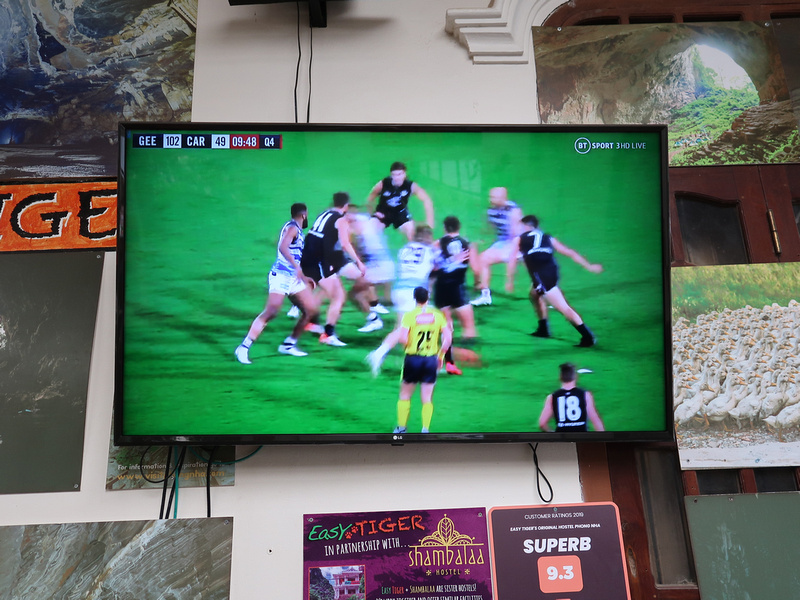 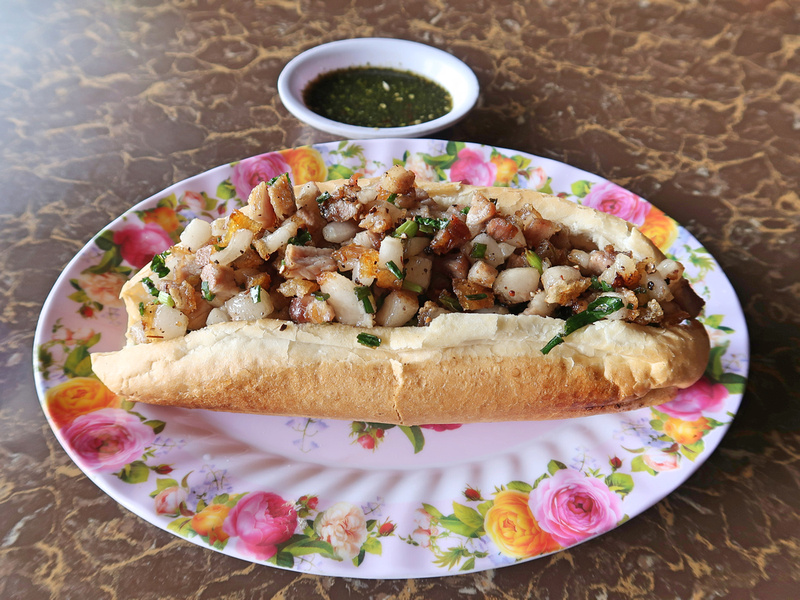 As a Simpsons fan I was amused to see this Kwik-E-Mart. 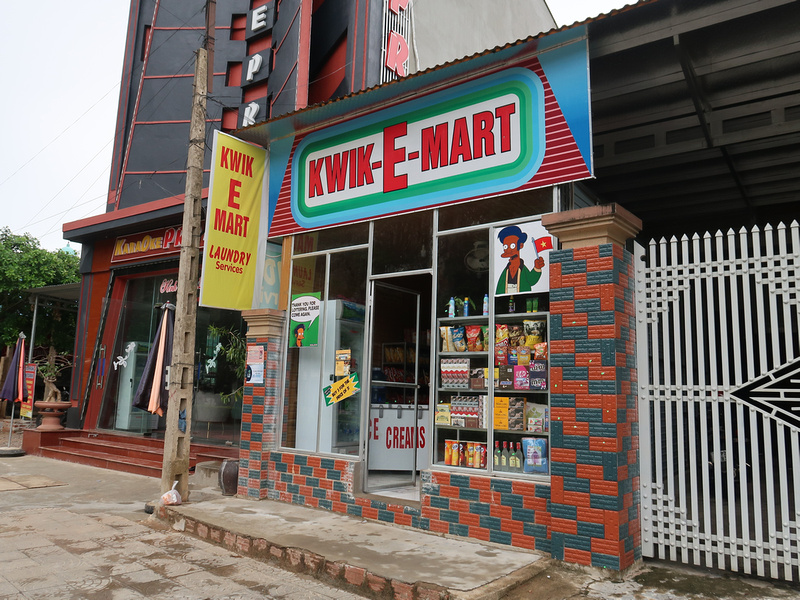 There is a memorial park at the town entrance dedicated to the volunteers of the Ho Chi Minh Trail. The sculpture is in the chonky socialist style that can be found across Vietnam. 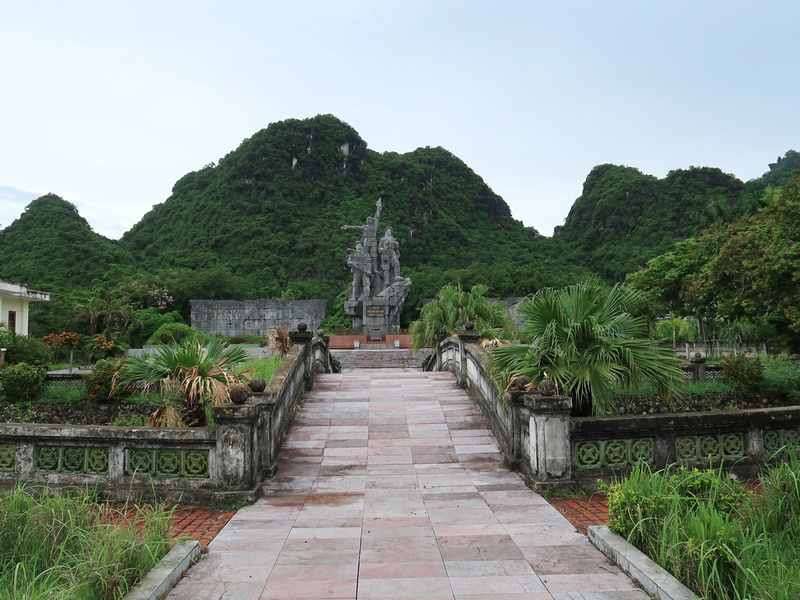 Have a look up close and you can see the workers standing on a bomb engraved “USA”. 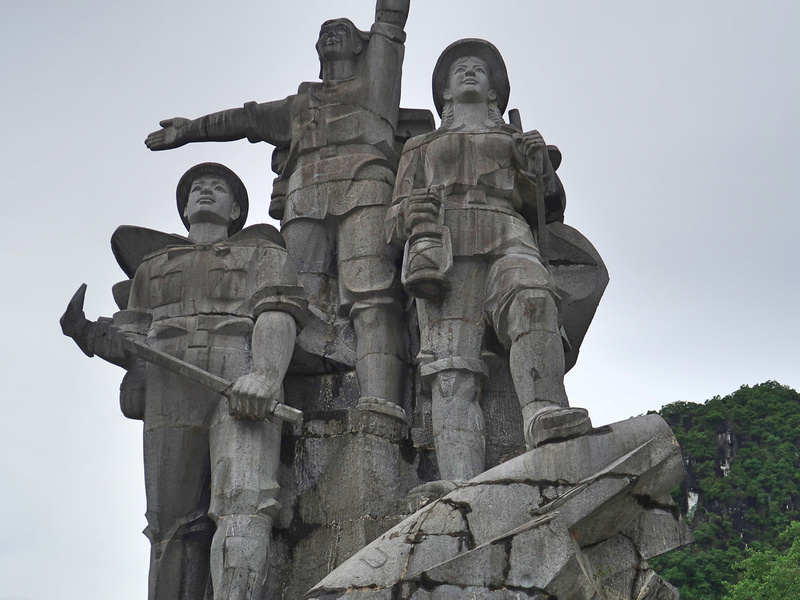 After cycling around town I went back to the riverside cafe at the Victory Road Villas and just enjoyed the view. 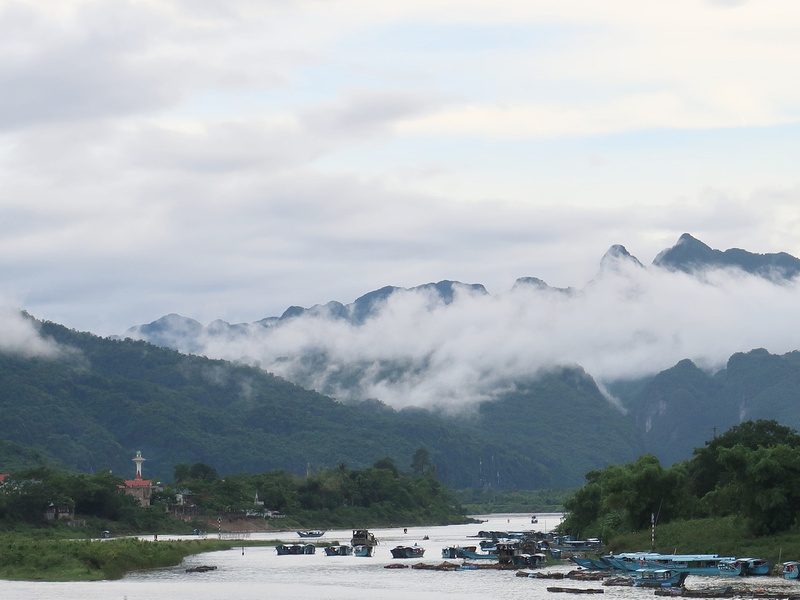 Phong Nha now has enough tourism infrastructure to make it easy enough to explore the area, yet it doesn’t feel like a tourist trap. If you’ve only experienced urban Vietnam with the main cities then Phong Nha would make for a good stop to see the more relaxed rural side of Vietnam. 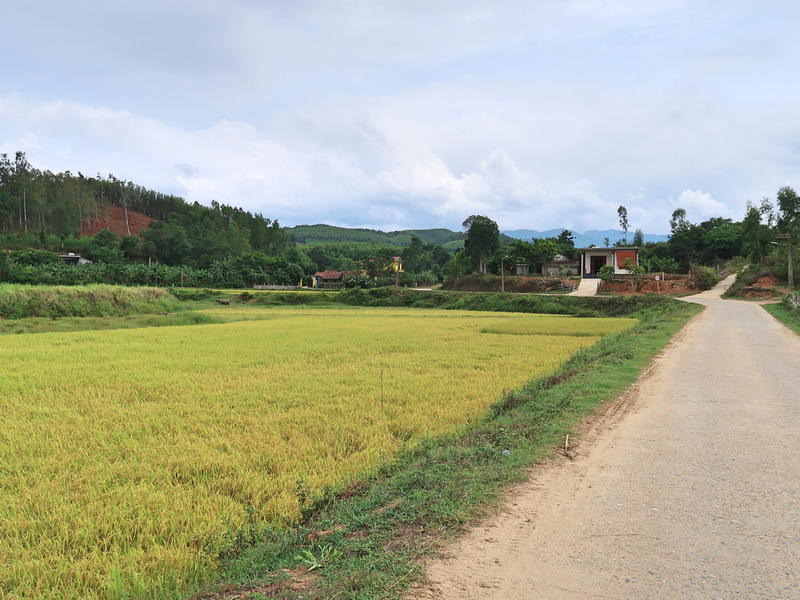