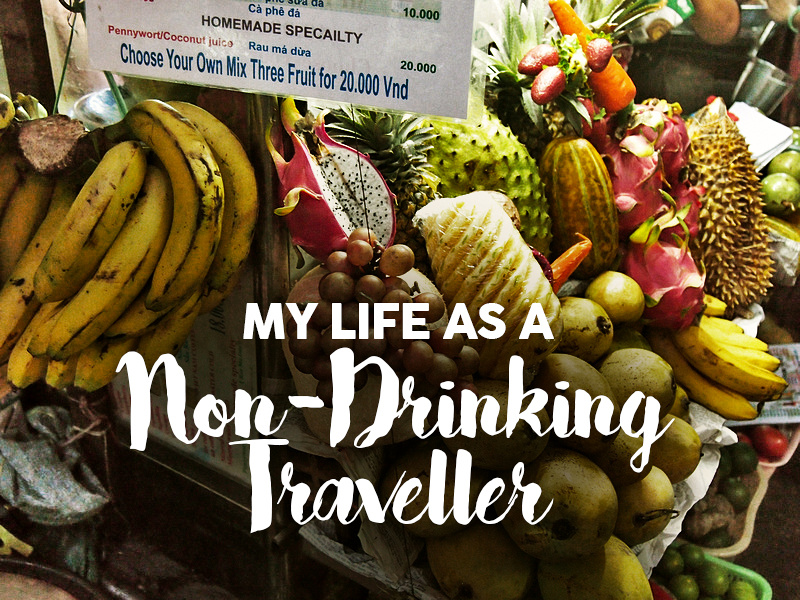 It was 20 years ago today

March 14, 2013 marks an important milestone in my life: I have been sober for 20 years. This means I haven’t had a drink or mind altering substance in that time, and to top that off I gave up smoking on the same day as well. Being a non-drinker has had a profound affect on my outlook on life, and how I live as a full-time traveller.

You don’t drink, and you’re Australian?!

I often get asked why I don’t drink, especially as I am Australian. I usually tell people that I am not a full-time traveller by choice, and that I have been banished from my homeland for not drinking. Australia has a big drinking culture and our well travelled citizens have carried this reputation abroad.

There is nothing wrong with responsibly enjoying a drink while you travel. This is just my experience and I’m sharing this more personal than usual post to explain why I don’t drink, and how being a non-drinker has influenced the way I travel.

I had a short and spectacular drinking career. I started out drinking after hours at school and once I reached the work force I was in full-blown drinking mode, getting smashed 3 or 4 nights a week. I lived with other drinkers and we would drink all night, sometimes through to the morning, and then go straight to work.

Blackouts were a regular feature of my drinking, meaning that I would drink to the point of losing memory and wake up the next day not knowing what happened the night before. I drank with a wild bunch who would also blackout, so we would pool our collective memory to piece together what went down. While I laughed those blackouts off at first, in the end I came to fear those moments of finding out what had happened. Some mornings we would look back and say, “that was the best party ever”, but most of the time I was dying inside from guilt and remorse.

At 20 years old, in the deepest throes of my alcoholism, I had what is known as a moment of clarity; I saw my life was what it really was. For some drinkers that moment takes decades, if it ever happens all. I knew something had to change or I was doomed. From that time on I tried to control my drinking, but once I started drinking I couldn’t stop. I would tell myself “I’ll control it next time” – then find myself doing the same thing over and over again.

A month after turning 21 I reached my rock bottom and knew I was done with this lifestyle. I was sick and tired of being sick and tired. I knew I could no longer drink in safety and that trying to control my drinking was futile. Conceding this point (what felt like defeat) was also like having a weight lifted of my shoulders.

I began my new way of life, not sure how I would live in this world without drinking. I sought help from other non-drinkers who had been where I have been, who shared their experience on how to live a life without drinking.

It took a lot of courage to tell people I was no longer drinking. Fortunately my family were supportive as were most of my friends. I reluctantly moved on from drinking friends who were still out there.

When I stopped drinking I wondered about how I would handle situations in the future, like birthday parties, weddings and special events, and after work drinks on Friday. How would I resist the social pressure to drink? It turns out I could do all those things without drinking – little did I know. While early on it was strange and uncomfortable to be unanesthetized in social situations, now I can comfortably attend events.

I used to worry about what people would think of me not drinking, especially in Australia where so many social occasions revolve around drinking. I soon found that it doesn’t matter what others think of me. I still have moments of self-consciousness (like right now as as I write this post) but one of the benefits of getting older is that the older you get the less you worry about what people think of you. This applies if you are a drinker or not.

Travelling as a non-drinker

One of the immediate benefits of giving up booze was a sudden surplus of cash. I used to go out with $100 (in 1993 money) and wake up with an empty wallet. I would swear I was getting robbed as I couldn’t possibly have spent so much money in one night.

Having control of my finances I soon found it easy to save money. I had a pile of debt to pay off which took a few years to pay off, and I maintained a savings account for travel. Not only could I save faster for travel, I can also travel for longer as I don’t have to budget for drinks.

Another benefit was the reclaiming of time. I lost so many days due to being hungover, lying around in bed or on the couch feeling sorry for myself. Today I get up early without having my day ruined with that lingering seediness.

I did a lot of backpacking travel in my twenties, staying in hostels where drinking and going out to pubs is common. I thought this would make backpacking a tedious experience. Instead I found that I attracted other travellers who were not looking to go out and drink, and I have forged some great friendships from these meetups.

The same goes for my expat life. I lived for a year in Dublin without having a drop, let alone a pint, of alcohol. I might be the only Australian who spent a year in Ireland and didn’t drink, I don’t know. What I do know is that I would walk around the streets of Dublin at night and be reminded that the guy passed out on the streets of Temple Bar could have been me.

I went to many social events at pubs in Dublin and never felt the need to drink, and after the initial shock of being a non-drinking Australian, most people didn’t care. I can go out for dinner and social occasions with my friends who are drinking, and I have the freedom to leave when parties become drinking for drinking’s sake.

These days I rarely spend time in pubs unless it is a special party or meetup. I prefer spending time in cafes talking over a coffee. This is less to do with my non-drinking and more to do with my introverted character and preference for meeting up in small groups or one-on-one chats.

20 years on and I find myself living in Ho Chi Minh City, with a life I never would have imagined. Around this time every year I reflect on my drinking life and I am filled with gratitude for the incredible life I have today.

Most of my friends are aware that I don’t drink and I’m happy to talk to people about it to anyone who asks. I was debating with myself whether to share this online, but all the friends I talked to were supportive of publishing this.

I have met numerous people in my travels who have asked how I can travel without drinking. I’m here to say that it can be done and my life has never been better. If you would like to talk more feel free to email me.