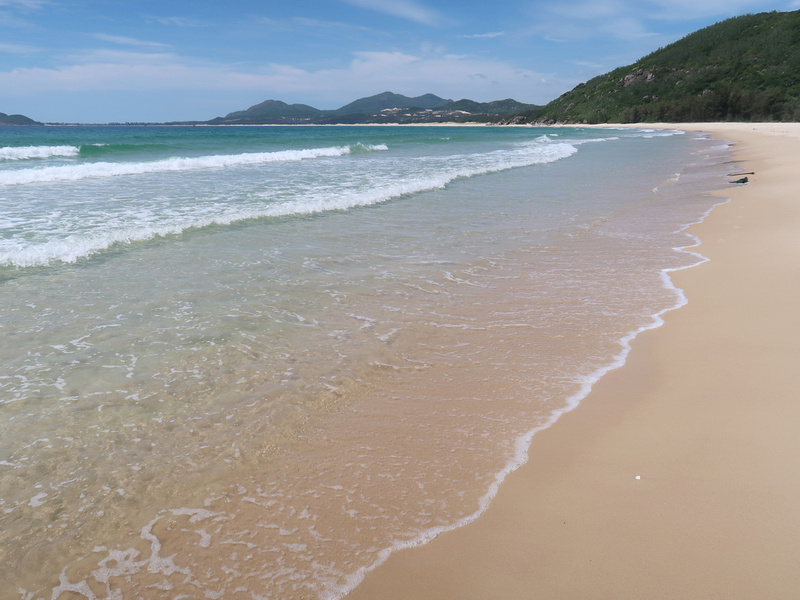 Vinh Hoa Beach is near a fishing village of the same name in Phu Yen Province, on the south-central coast of Vietnam. It’s not near any major city, so it’s best to describe is as being approximately half way between Quy Nhon and Tuy Hoa. If those cities are obscure to you, it’s about half way between Da Nang and Nha Trang. And if that description isn’t helpful, just refer to this map which includes other places mentioned in this article.

Phu Yen has a small coastal frontage featuring beaches broken up by peninsulas and coves. It hasn’t experienced the tourism boom of its neighbouring provinces, though things look to be changing.

Vinh Hoa is on a peninsula off the main highway. It’s also referred to as Song Cau, which is a town that also includes villages in the surrounding area for administrative purposes.

I was travelling by public transport and I wanted to see how much of the coast is accessible if you aren’t riding a motorbike. I was given instructions on how to get to my guesthouse, which involved getting off at a bus stop where there would hopefully be motorcycle taxi drivers (xe om) waiting.

I showed the xe om where I wanted to go at Lucky Spot Beach Bungalow, and Google Maps just showed a road in the sea. I was wondering if I was staying on a pier (like the place I stayed at in Hua Hin). 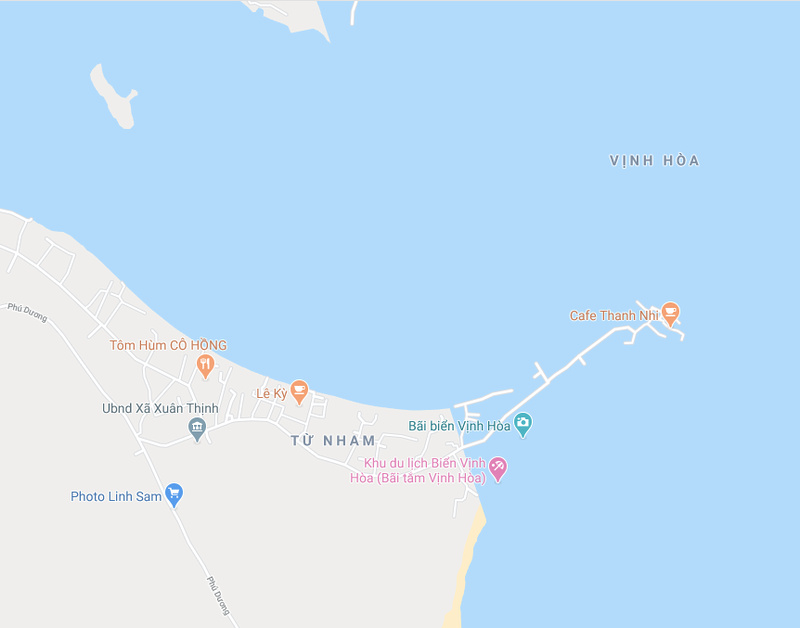 It turns out that Google Maps hasn’t mapped this part of the coast very well. If you switch to satellite view it shows a head of land with a long, arching beach. 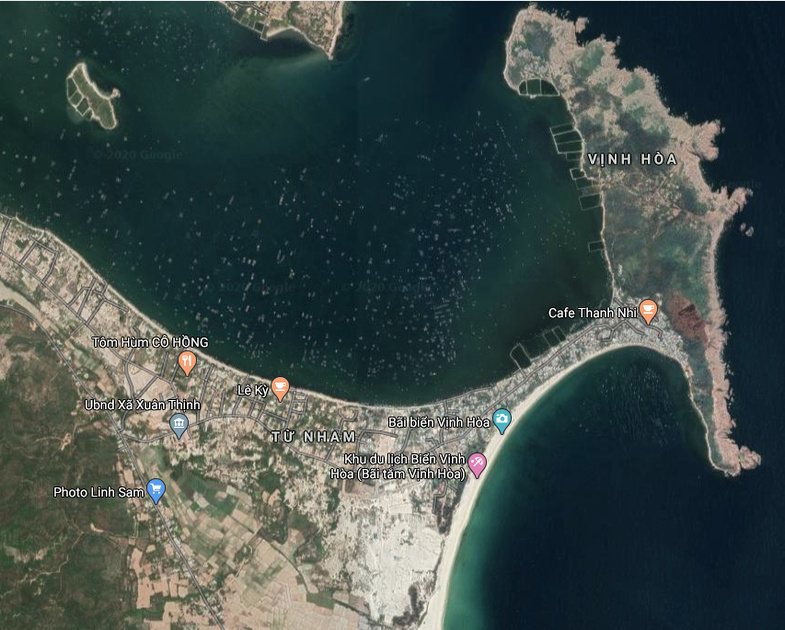 Not knowing exactly where to go the rider dropped me off at Ocean Beach, which was near enough to where I was staying. In fact there are only three places to stay here, so I was bound to find it eventually.

I chatted with the owner of Ocean Beach while waiting for the owner of my guesthouse to come over to get me. The proprietor of Ocean View is an expat just a few years older than me. He worked in IT before giving up life behind a computer to run a hotel on a secluded beach. I wondered if I was looking at my future. 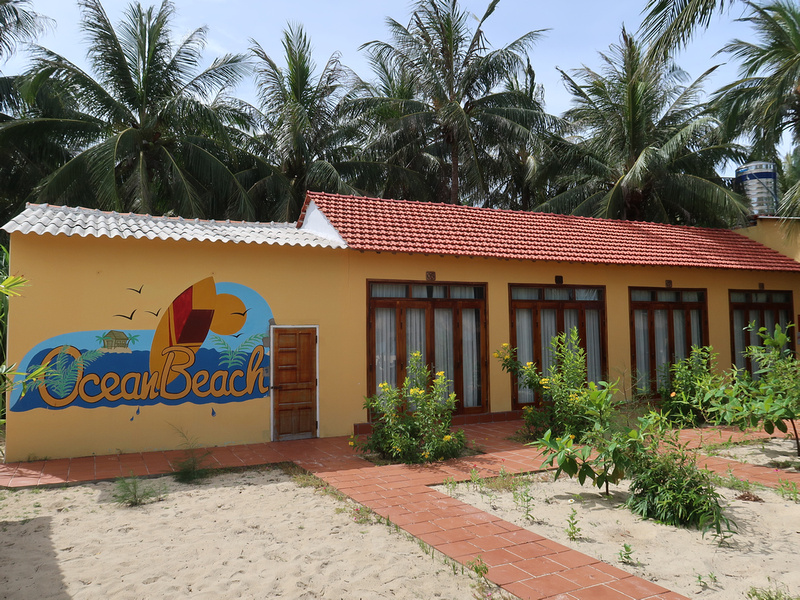 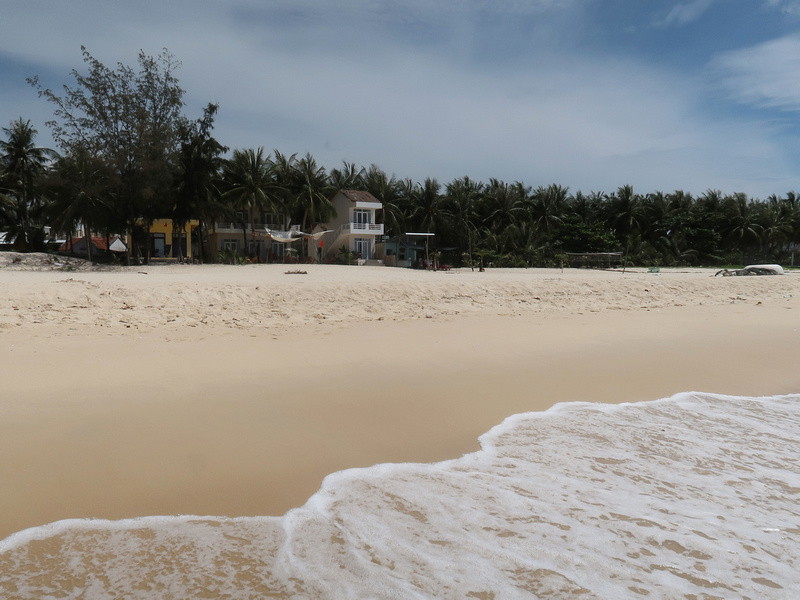 I ended up going back to Ocean View for lunch, and met a fellow nomad who had bunkered down here during the pandemic lockdown. There is a pool table here where you can play bare feet in the sand, so we played before I took off for exploration of the peninsula by scooter. 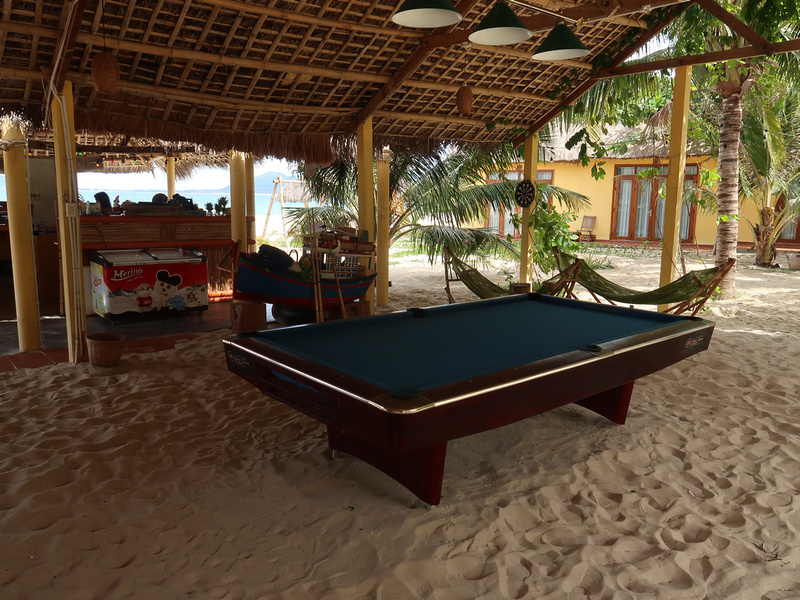 The peninsula is mostly rural, and being a road to nowhere there is hardly any traffic. 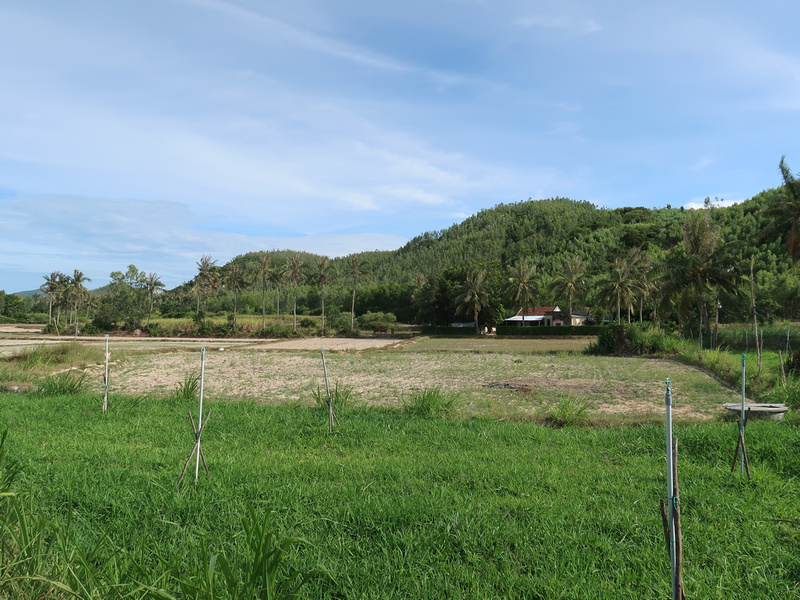 For someone used to Saigon traffic this was a lovely place to ride around. 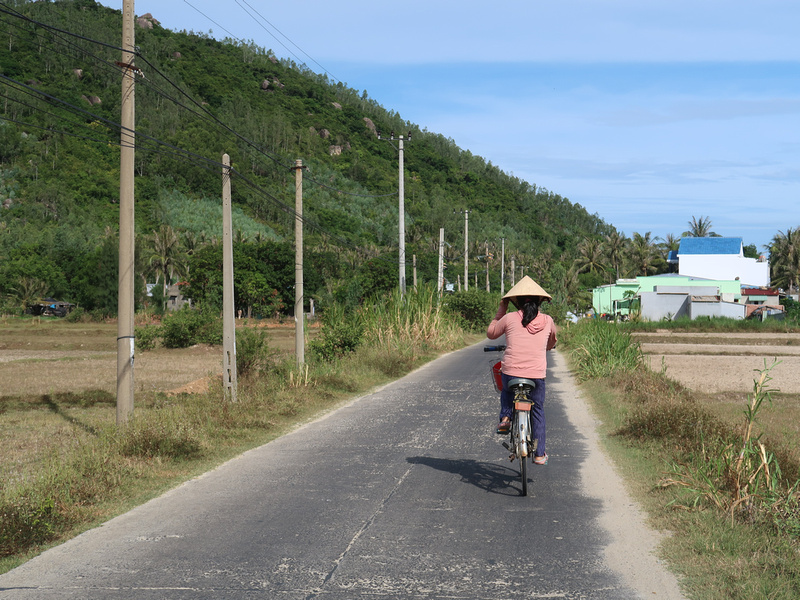 There are lots of sand dunes here, so on such roads I just cruise along at 40km/h in case of drifting sand on the road. 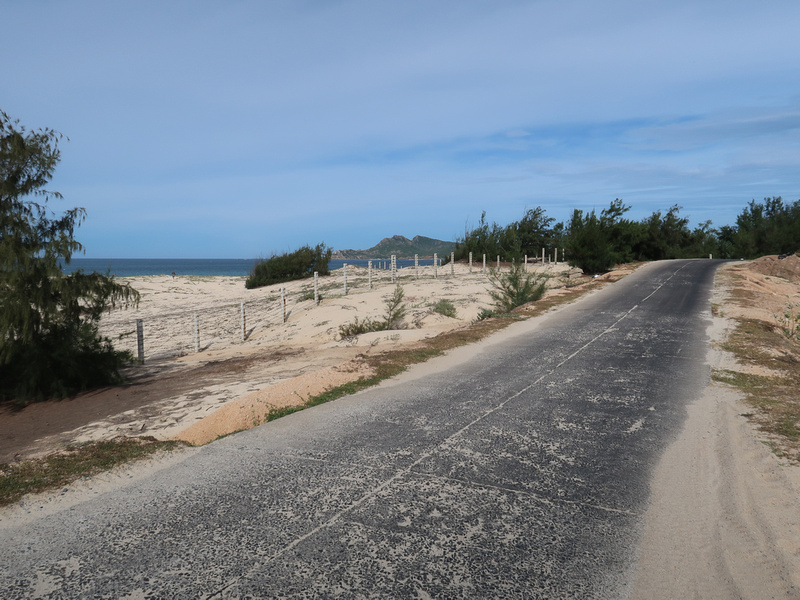 And there is the occasional temple along the way. 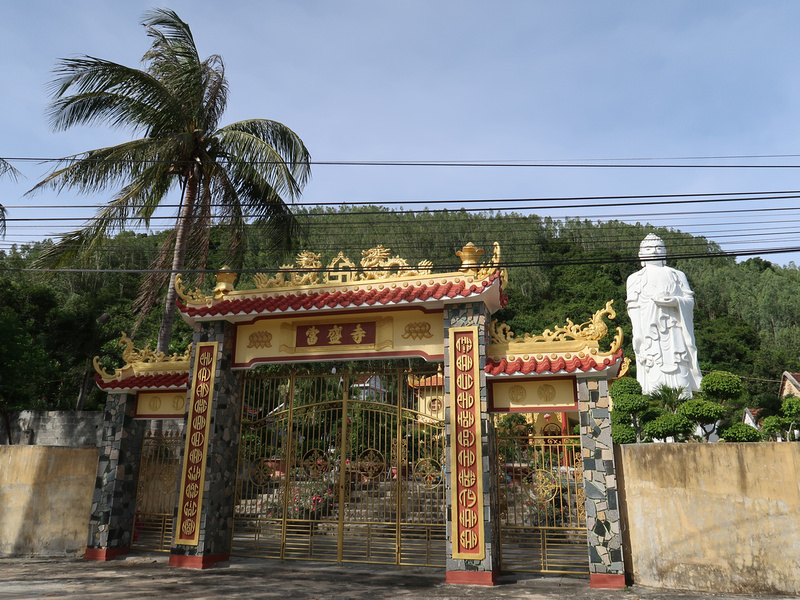 On the west side of the peninsula is Xuan Dai Bay. The bay is filled with platforms for fish farms. 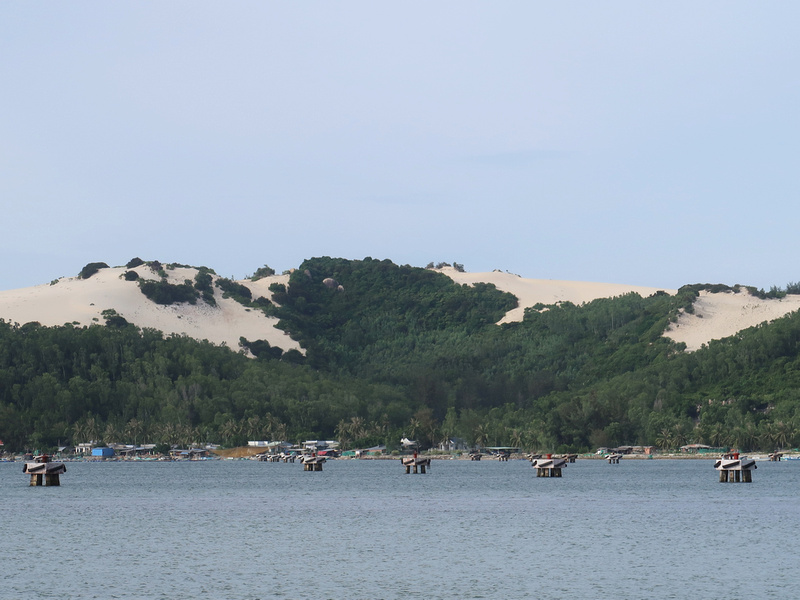 Inside the bay are these boxed areas for shrimp and lobster farming. 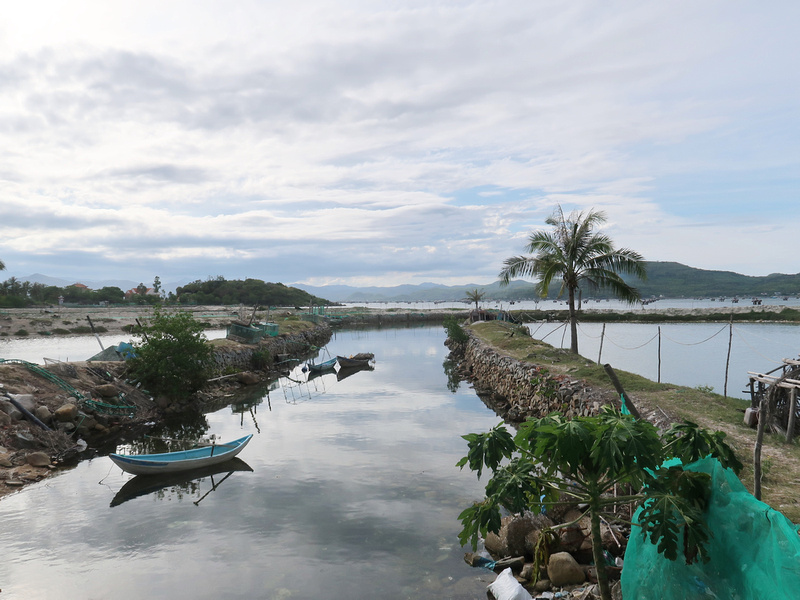 On the drive from Tuy Hoa to Song Cau the coast is dominated by aquaculture, so it’s no wonder that there isn’t as much tourism here. 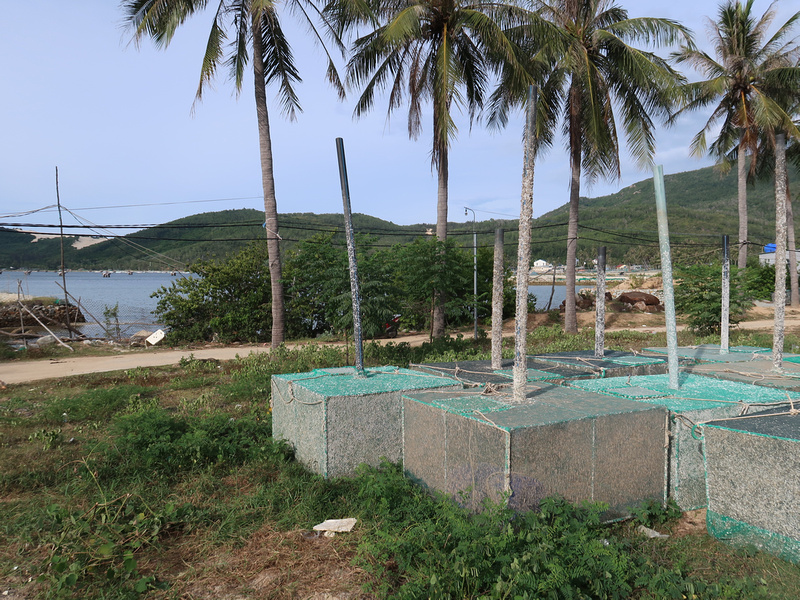 While I was driving around the fishing villages I didn’t get down to Om beach at the bottom of the peninsula. My friend Tom at Vietnam Coracle describes it as one of the best beaches in Vietnam. I was already gobsmacked by how good Vinh Hoa was, which he also listed as one of the best, so I figured didn’t need to see another beach. Anyway, just days after I was on the peninsula the beach was closed off in preparation for the construction of a resort.

After riding around I went back to Vinh Hoa as I wanted to make the most of my time there. 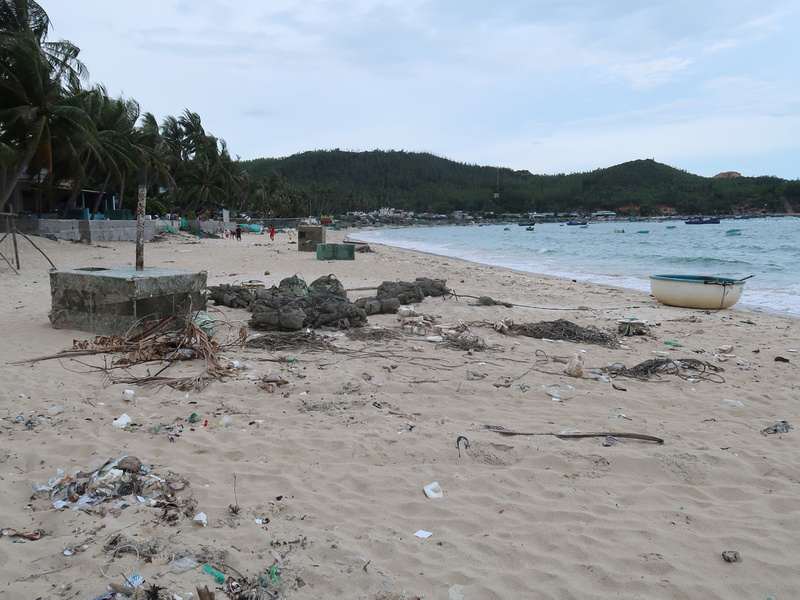 The good news is that this problem is on the radar, and Phu Yen has recently entered a program for reducing non-biodegradable waste. 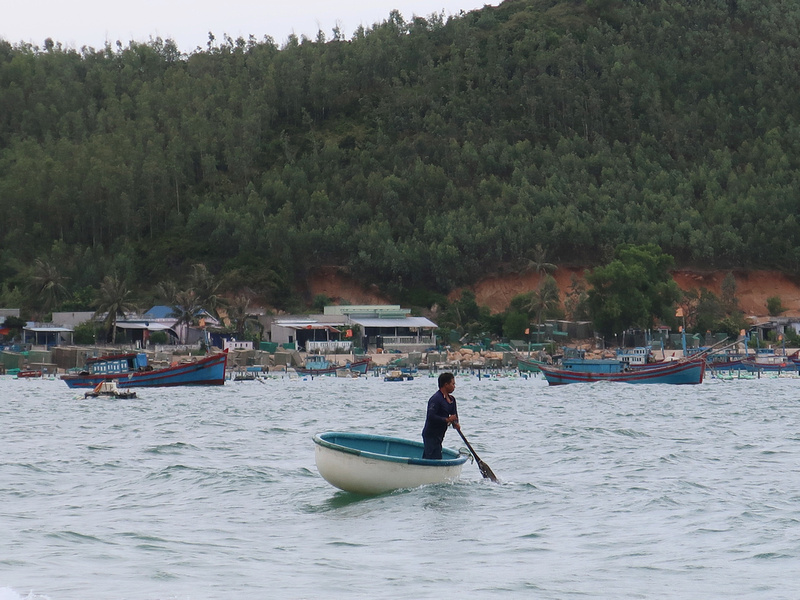 There were fishermen next door to us having a drink, and they invited me over. It’s hard to tell people in any language that I don’t drink, so I politely waved while walking down the beach.

There is no one on the beach during the day, because HOT. By late afternoon though residents from surrounding villages descend on the beach for a swim. I saw some school kids in the sea in their school uniforms, which schooled-aged James would have thought was completely reasonable. 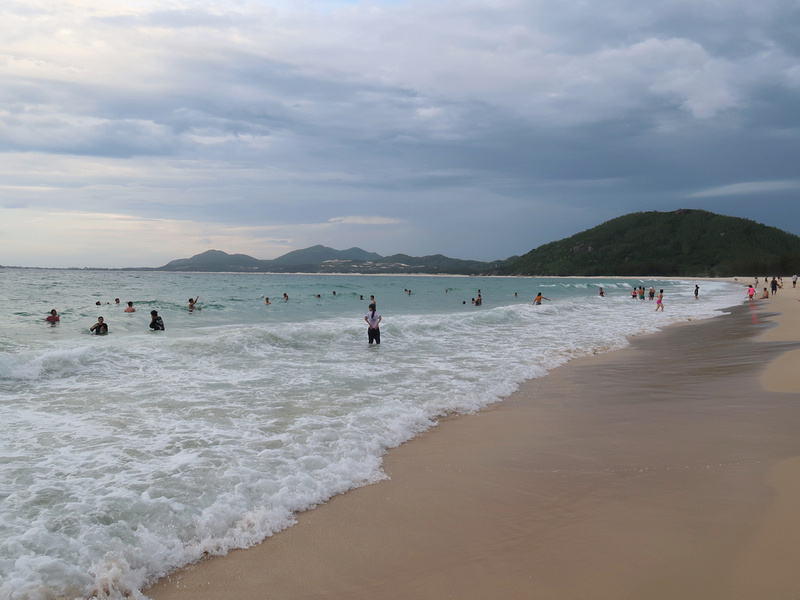 Keep going further down the beach, and the rubbish problem eases. I saw this bit of detritus which will be the symbol of 2020. 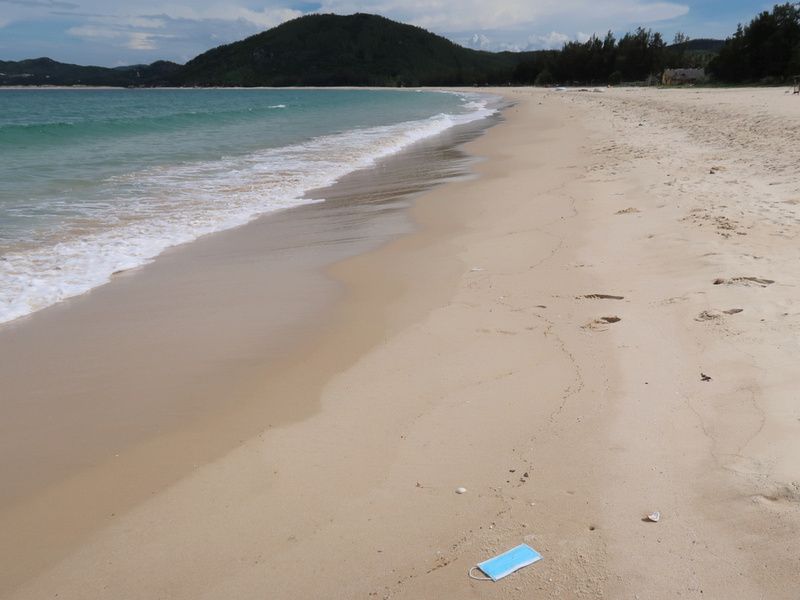 Keep going further south and the only only things on the beach is sea life that has been washed ashore. 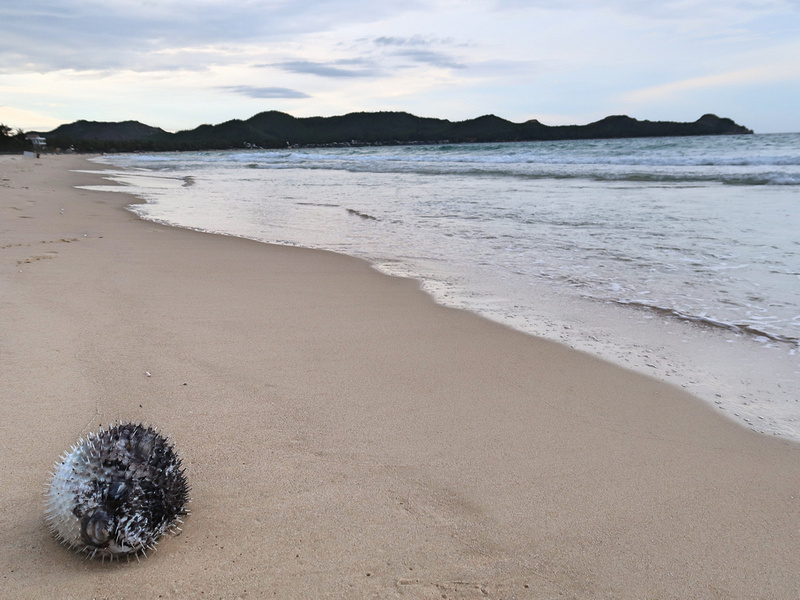 At the far end of the beach is a forest, and the beach continues for several kilometres as Tu Nham Beach. 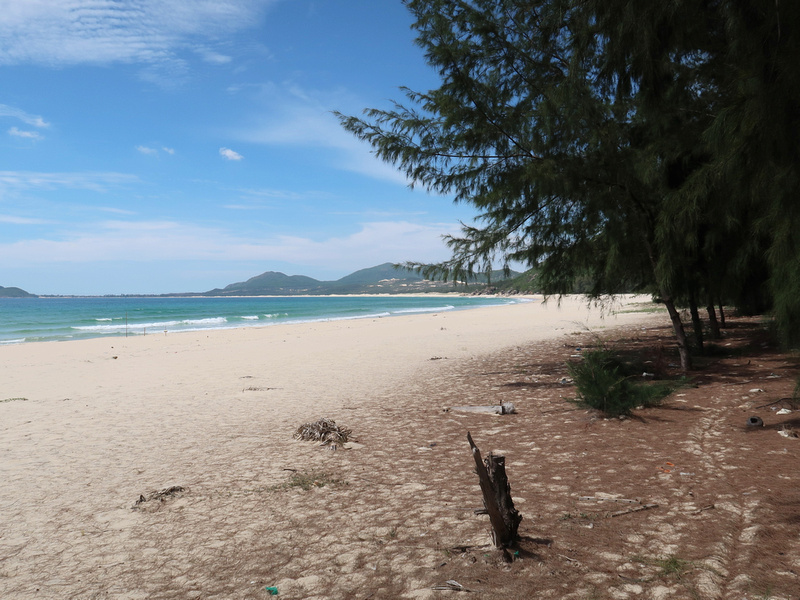 Behind the trees at the southern end of the village area was some earth-moving equipment. 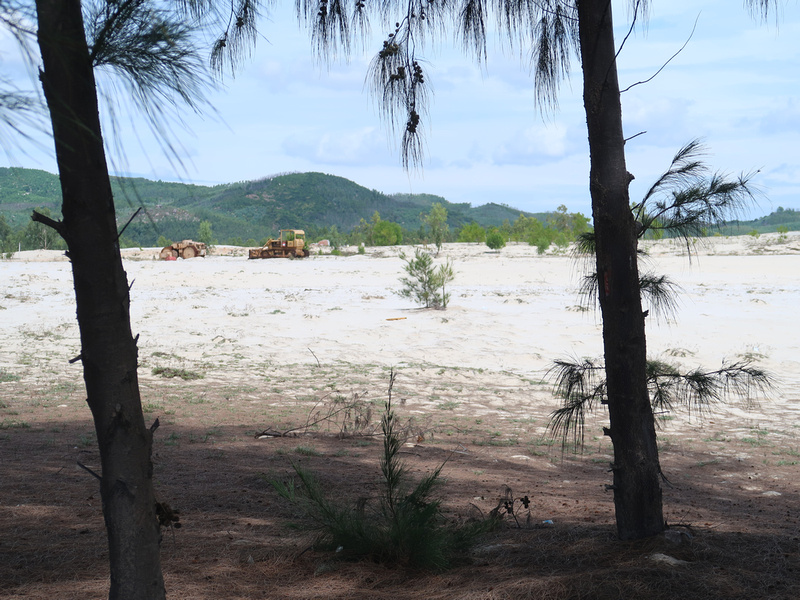 There was no signage or other indications of what was going on, but in this case, Google Maps knew the answer. This will be the location of Vinh Hoa Emerald Bay Resort. It seems the word is out about this amazing stretch of beach. 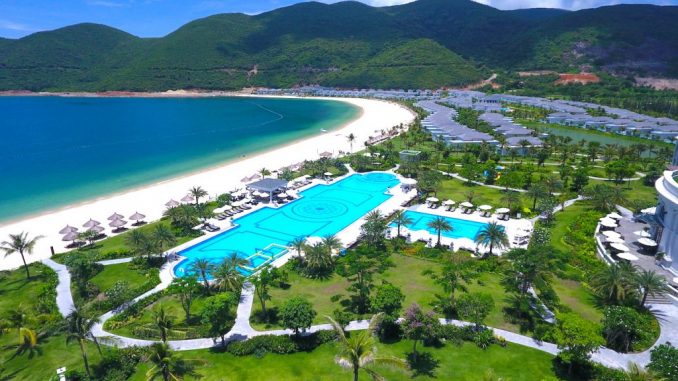 Phu Yen province wants its share of the tourism pie, which is understandable. When I was looking for what else is planned for the area I found a master plan for the future development of Xuan Dai Bay area. The visitor numbers by the year 2030 are ambitious compared to the current amount of tourists.

I think the geography of Phu Yen with its small beaches and aquaculture industry would prohibit high-rises like in Nha Trang and Da Nang. Even the capital of Tuy Hoa seems to be going for a low rise approach.

Maybe by 2030 I won’t need to explain where Vinh Hoa is as it will be world-famous. 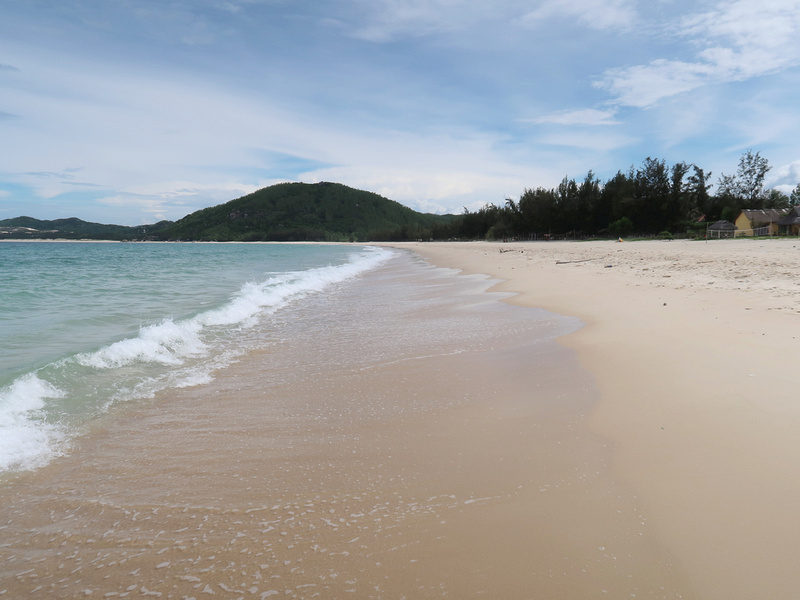 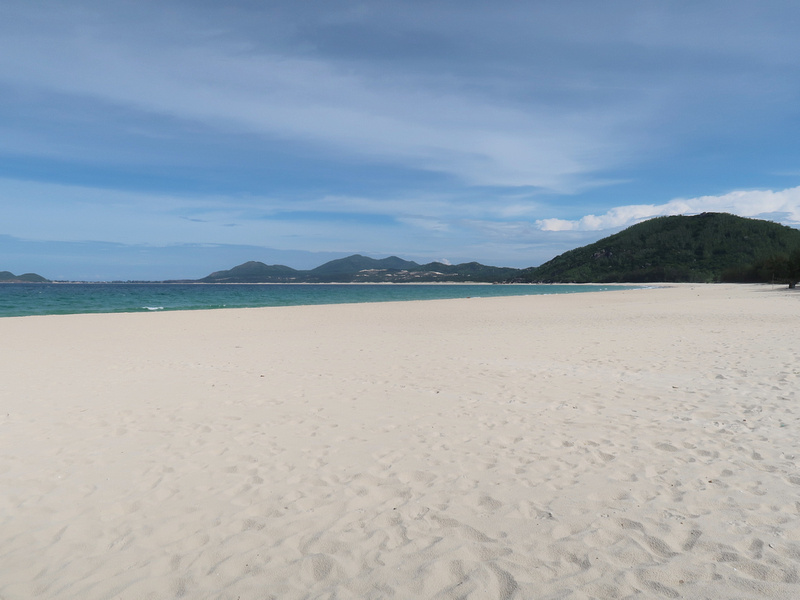 I often think about what the ideal small beach destination should look like. For some people, three guesthouses on a beach might be perfect. I think about ten guesthouses would be ideal. You could turn up unannounced and have a chance of finding a room, and have a variety of places to eat every day without eating at the same place.

But when does ideal become overrun? That is probably how Boracay in the Philippines started out. With just a few guesthouses it must have been a paradise, then it slowly deteriorated to the point that they had to call a time out and close the whole place down to fix it up.

I enjoy the big city beach destinations of Vietnam. I like Da Nang. I like that I can fly in and be ten minutes from the beach and have access to cinemas, sushi bars, and third-wave coffee shops.

Sometimes though you just need a quiet and remote beach getaway. Ideally it would be great to have a network of beaches like Vinh Hoa along the coast. Every 100 km or so a beach with a few guesthouses, where you can slowly hop your way up and down Vietnam’s 3000+ kilometres of coastline.

When I fly along the coast and look out the window I wonder about all these little beaches on the coast. If I see a place that looks especially appealing I’ll try and remember where it was and then look for it on the Google Satellite view. 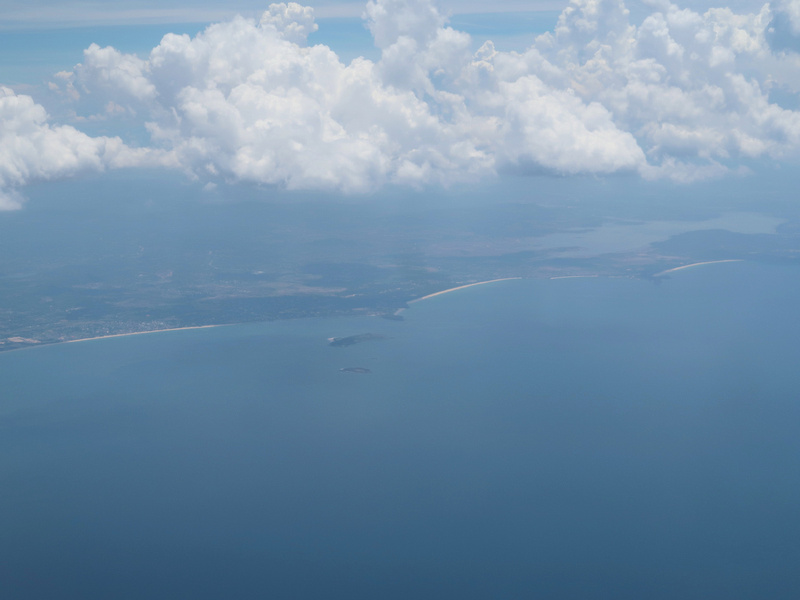 [Aerial view of the coast of Phu Yen province.]

For now though Vinh Hoa remains as an idyllic small beach getaway in Vietnam.

Where to stay on Vinh Hoa Beach

At the time of my visit there were three places to stay, though I suspect there will me more options in the future.

I stayed at the Lucky Spot Beach Bungalow, and here is my review.

I would book in advance as there aren’t any options nearby.

How to get to Vinh Hoa Beach 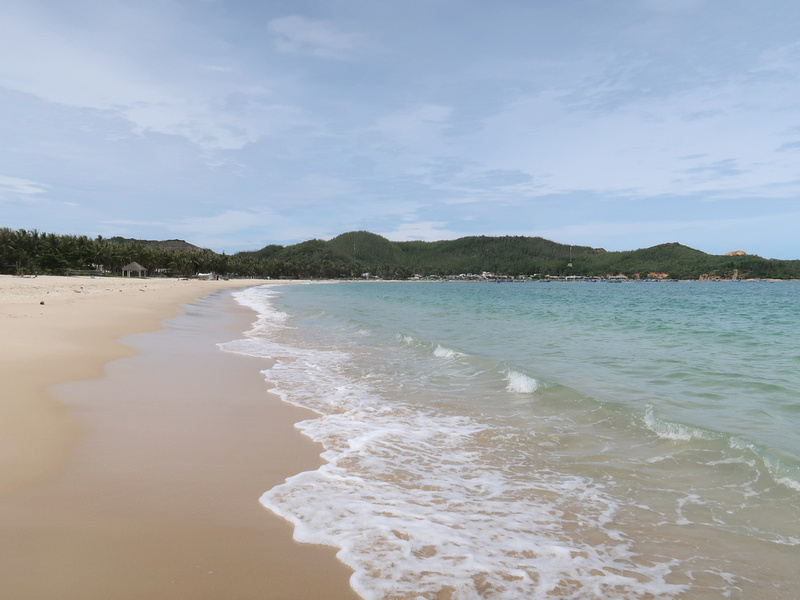 Despite it being a secluded spot Vinh Hoa isn’t too arduous to get to by public transport.

Tuy Hoa is on the main north-south railway, and the airport has flights from Hanoi and Ho Chi Minh City. If you have time spend some time in Tuy Hoa and experience life in a little-visited provincial capital. From Tuy Hoa get Bus 8 to Song Cau. It departs from the main bus station and also makes its way around the city before going to Song Cau. 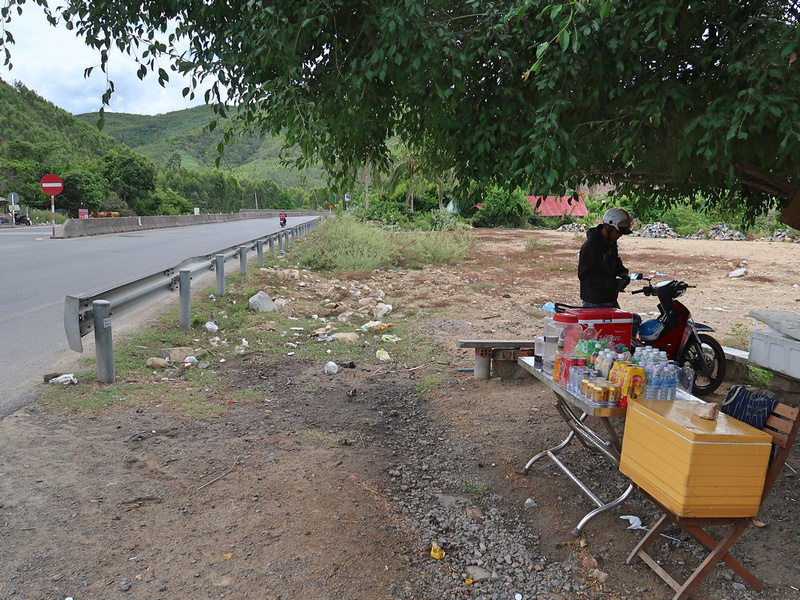 [Deo Nai Bus Stop near the turn off for Vinh Hoa Beach.]

At the bus stop there were xe om lounging around, and it cost 40,000 VND to ride to the beach. If there are no riders there then message your guesthouse and they will arrange a taxi for 150,000 VND. It goes without saying that you should have a local sim card by now.

Quy Nhon has more flight options available from around the country, but only one train service a day from Saigon as it is not on the main north-south line. From Quy Nhon get the local bus number T11 and go to the same bus stop. You will be dropped off on the other side of the road, so cross the road to the bus stop where the xe om are.