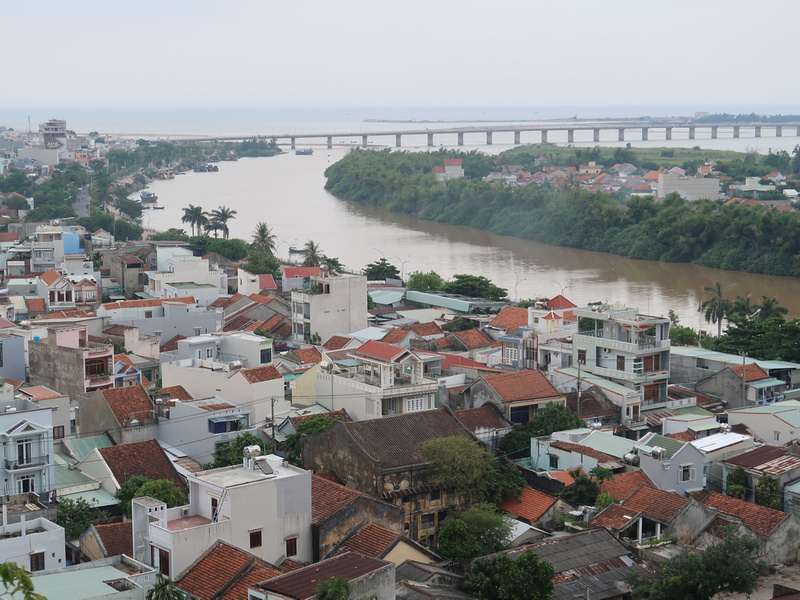 Tuy Hoa is the provincial capital of Phu Yen province on the south-central coast of Vietnam, about half way between Quy Nhon and Nha Trang.

I arrived in Tuy Hoa to visit the beaches of Phu Yen. Rather than heading straight to the coast, I stayed to explore the city. There’s not much to do here, which I found to be part of its appeal. Sometimes after visiting touristy places like Hoi An I like to decompress in provincial cities.

Tuy Hoa is smaller than the aforementioned neighbouring cities. It’s probably too small for an airport, but it has one as a leftover from the American War. So far there are only a few flights from Hanoi and Ho Chi Minh City, and there is no prospect for it to become an international airport anytime soon.

It has city beaches though, and I keep hearing rumblings that Tuy Hoa is going to be the next coastal city in Vietnam to be developed. That was another reason I wanted to visit.

This is my trip report for Tuy Hoa. Places mentioned in the post are marked on this map.

Without really knowing where to stay in Tuy Hoa, I picked the area near the beach. I figured that if the city was plying to become another coastal resort city, that is where I should look. 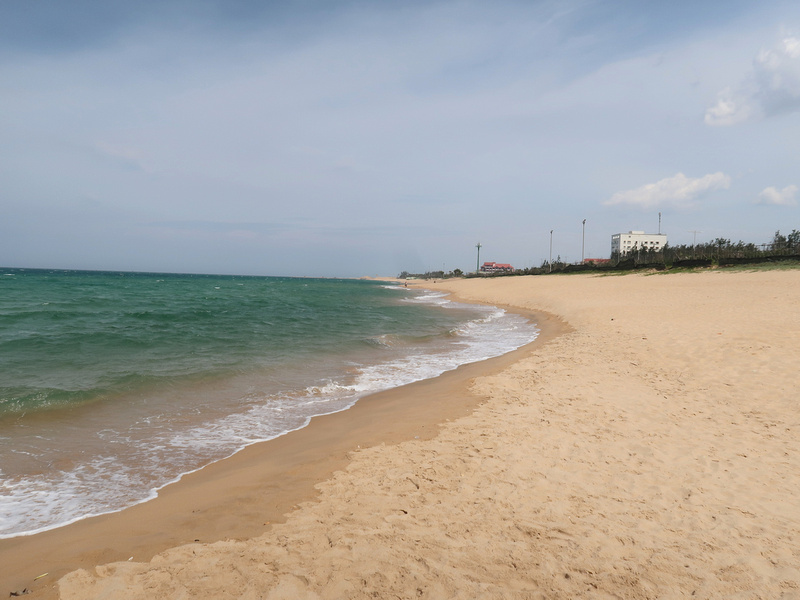 Unlike Nha Trang or Da Nang, the beach front of Tuy Hoa is mostly undeveloped. There are large blocks of land that are boarded up, suggesting that this will not be the case for much longer. 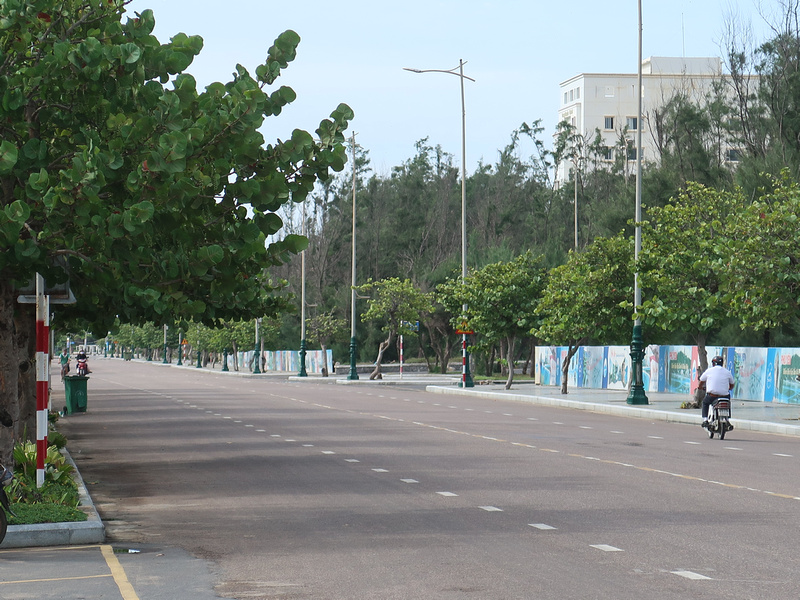 There is a park and walkway on the beach, but it’s built in a way that you don’t get a view of the sea for much of the way. 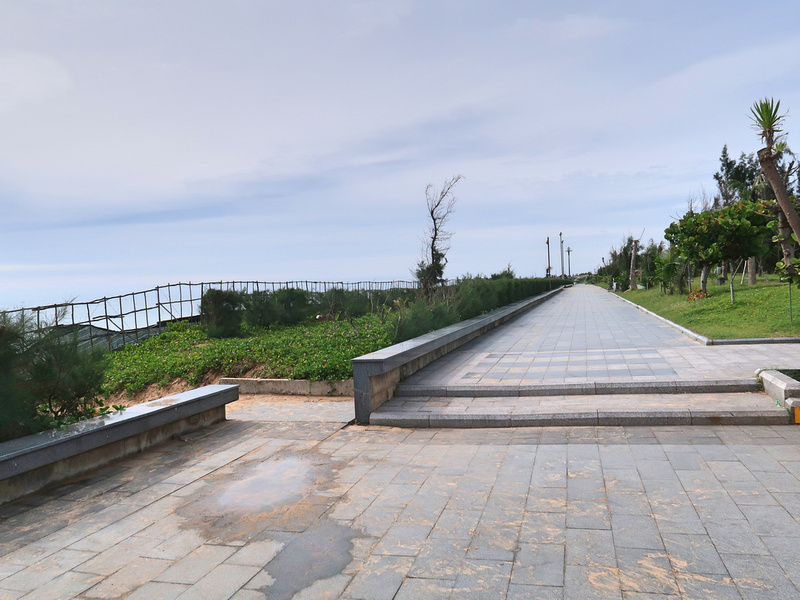 Tuy Hoa has two distinct sides split in half by Hung Vuong Road: beach side, and the city side. I found there was more things to see in the city, but I’m glad I stayed near the beach as it made me walk to more places. Vincom Plaza is one of the main landmarks on Hung Vuong Road. 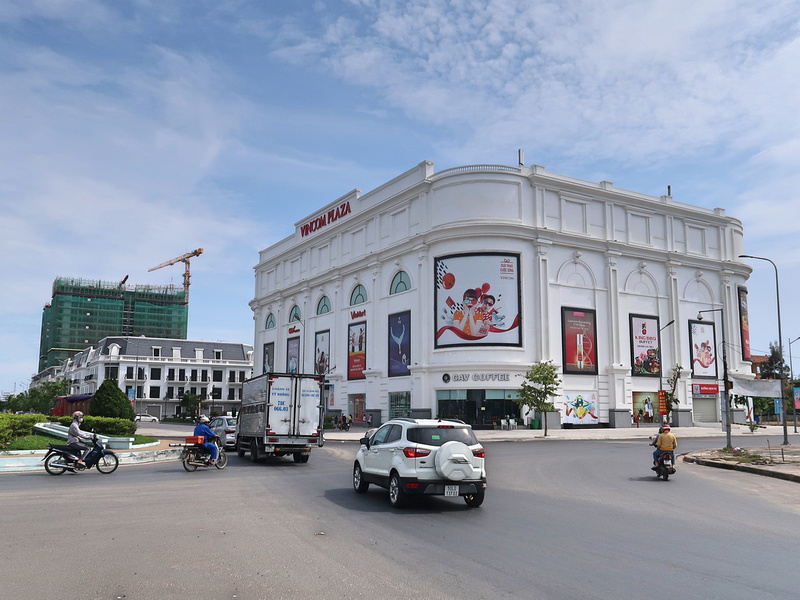 One of the developments I saw in the city is a new residential area built around a landscaped park and lake. 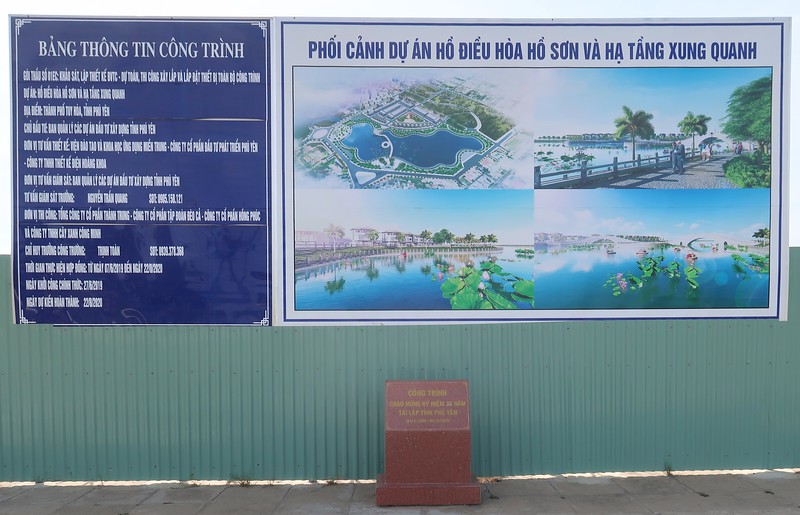 I would like to see what this looks like in the future when the trees have grown. If you are interested I’ve made a separate report of the main Tuy Hoa construction projects. 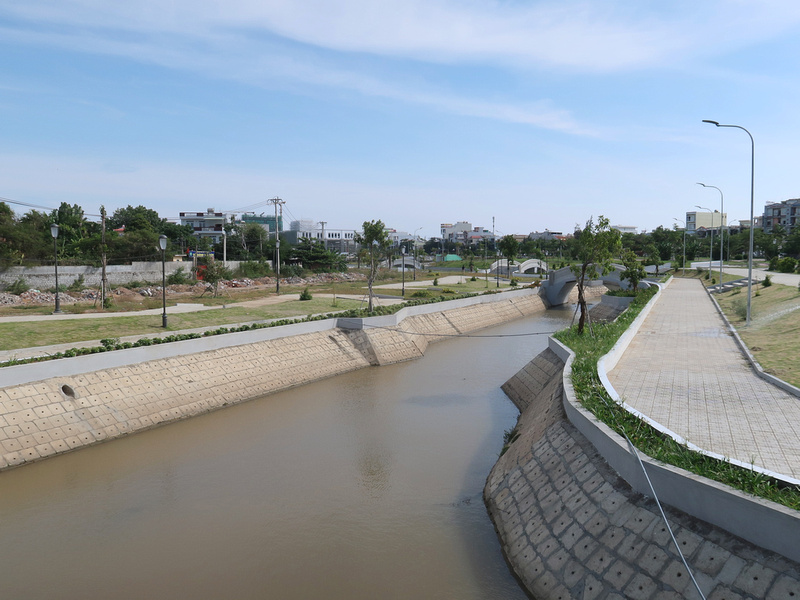 Whenever I visit a provincial Vietnam city I use Highlands Coffee to gauge how developed it is. Highlands is the biggest cafe chain in Vietnam (it was “The Starbucks of Vietnam” before Starbucks arrived in 2013). At the time of my visit there was still no Highlands in Tuy Hoa.

There are lots of small cafes everywhere though. One of the joys of travelling in Vietnam is to sit in a garden cafe while watching coffee drip through a filter. A Vietnamese iced coffee with milk cost 18,000 VND ($0.78 USD). I arrived at Cafe Hoang Viet to see this yellow flowering tree. 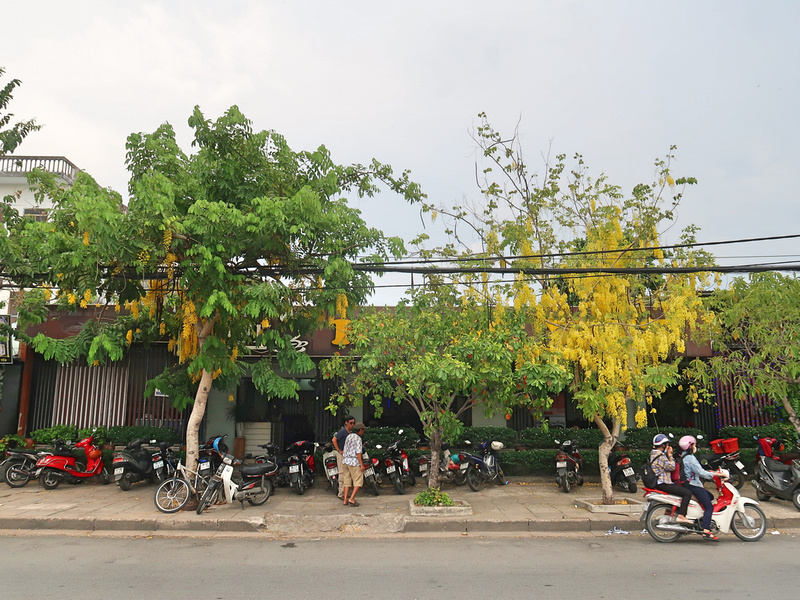 The architectural landmark is the Champa tower (Nhan Tower) on a hill in the city centre. 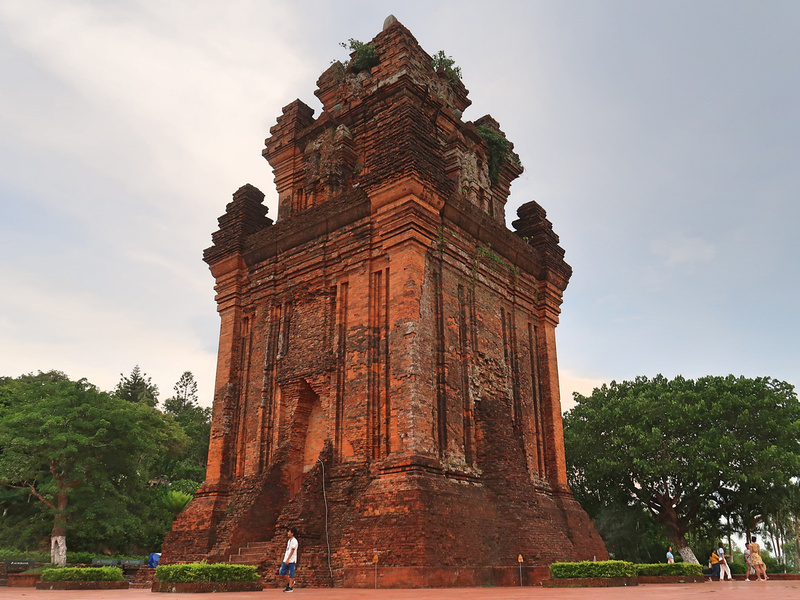 It’s near the Da Rang River, and it provides and excellent overview of the city.

From this hilltop you can see what a geographically interesting city this is. Like many of Vietnam’s coastal cities, it’s hemmed in between the mountains and the sea. Tuy Hoa is on an alluvial plain, and some parts of the city look like it is a flood plain. And then there is Chop Chai mountain, which is just sitting there by itself. 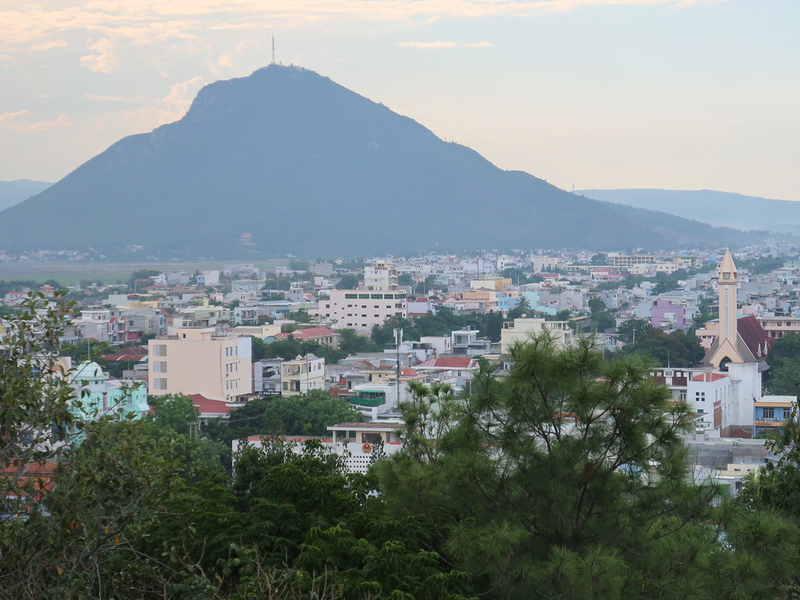 Every provincial capital has a museum dedicated to the province. I can’t vouch for the contents, but the Phu Yen Museum is one the most visually striking museum buildings in Vietnam. 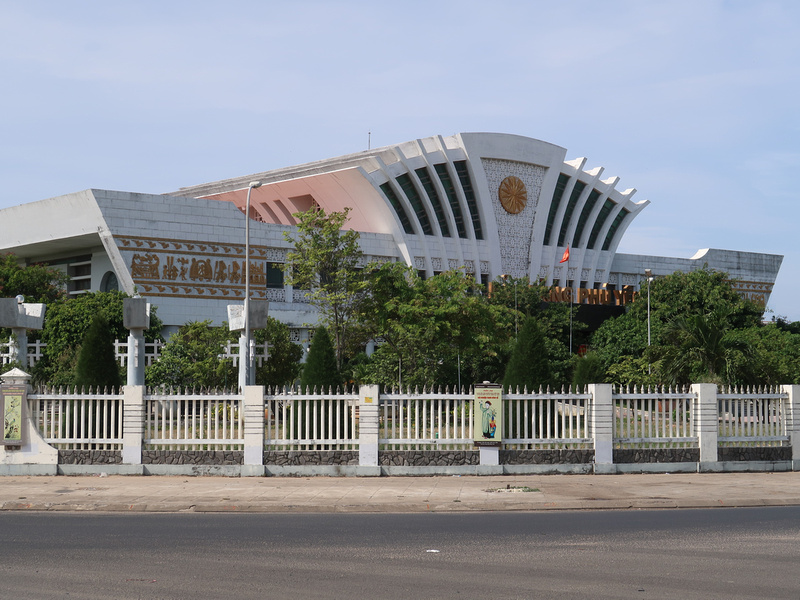 One of the annoying things about provincial Southeast Asia is the rise of the urban bird nest farmers. Houses in city centres are being converted into windowless bird nest factories, where screeching bird noises are broadcast by loud speaker to attract birds to the houses. I’ve seen this in Malaysia and Cambodia, and now the trend has caught on in Vietnam. This should be classified as an agricultural business and kept outside of city centres. 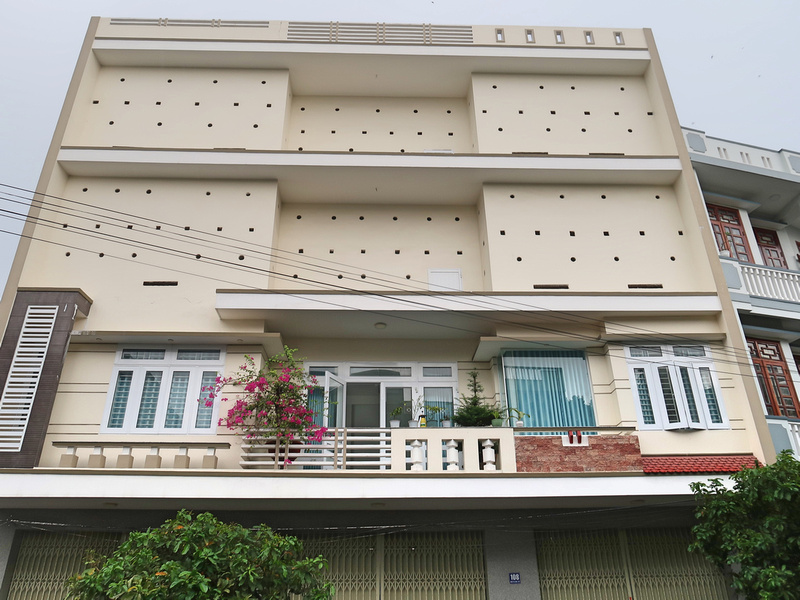 As with Highlands and other domestic chains, there aren’t many international chains here either. KFC is here, because Colonel Sanders conquered Southeast Asia decades ago. And Jollibee from the Philippines is also here. Apart from some Japanese BBQ and Chinese hotpot places, there isn’t a lot of international choice here. 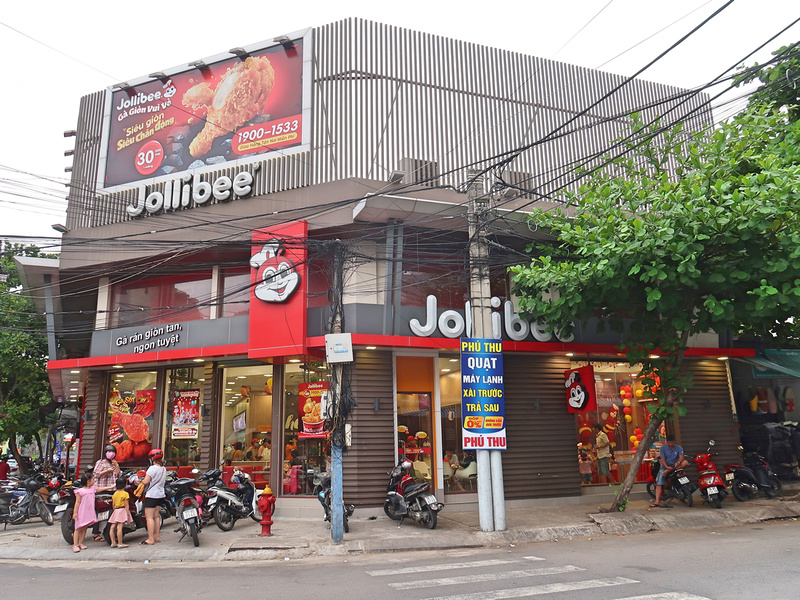 Being on the south-central coast I sought out Banh Xeo, and I found a good one at Banh Xeo Quo Nau. 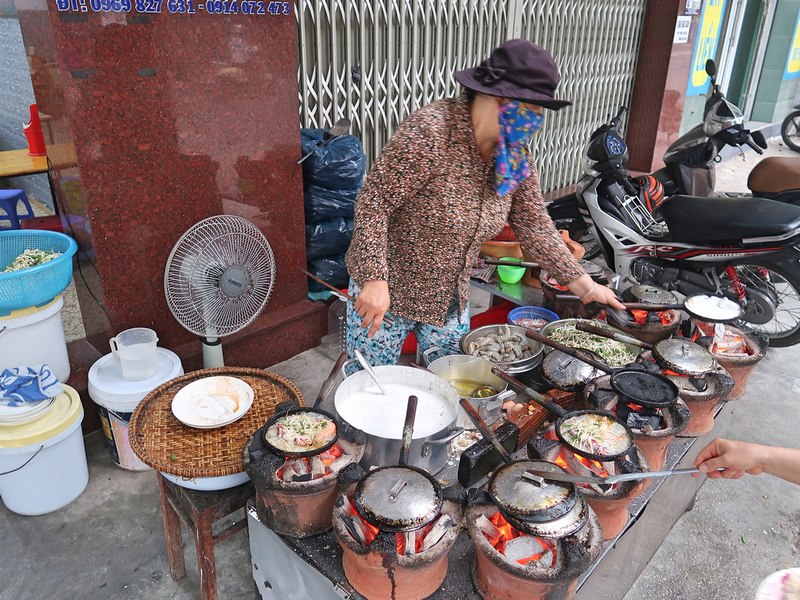 Banh Xeo range in sizes as you go up and down the coast, with the big ones coming from the Mekong Delta. Here they are taco-sized, starting at 6,000 VND (0.26 USD) each. 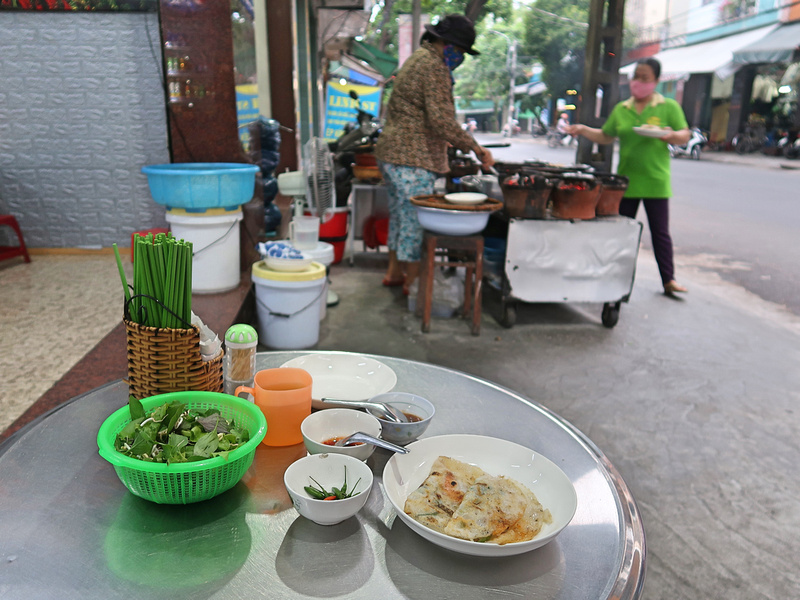 Almost every province has a dish they are famous for, and in Phu Yen it’s Banh Canh He. This is a fish soup that is sprinkled with chives. So many chives that when it arrives it looks like nothing but chives until you dip your spoon in and find the noodles, fish, fish cake, and quail egg. I had this at Quan Uyen (refer to map), but you will see signs for this everywhere. 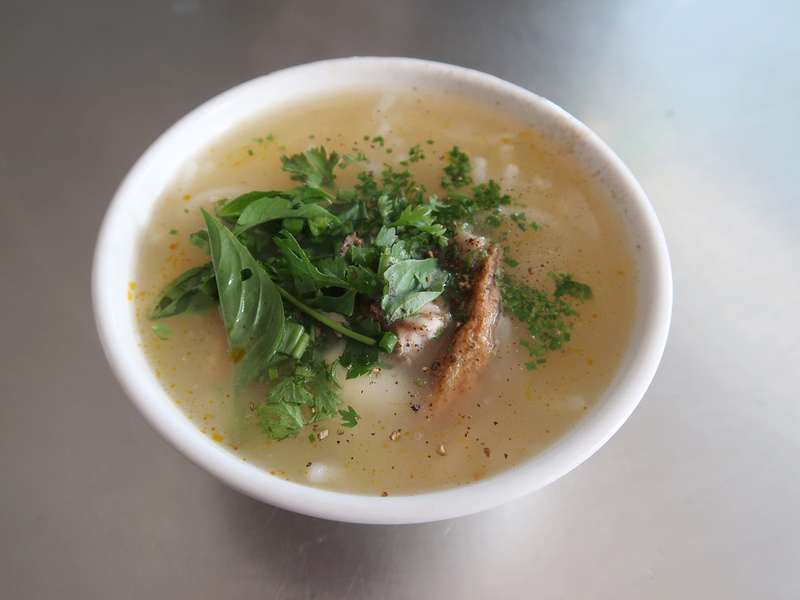 This banh mi place was the first thing I ate in Tuy Hoa. Maybe I was hungry after the flight, but it left such an impression on me that I still think about it. 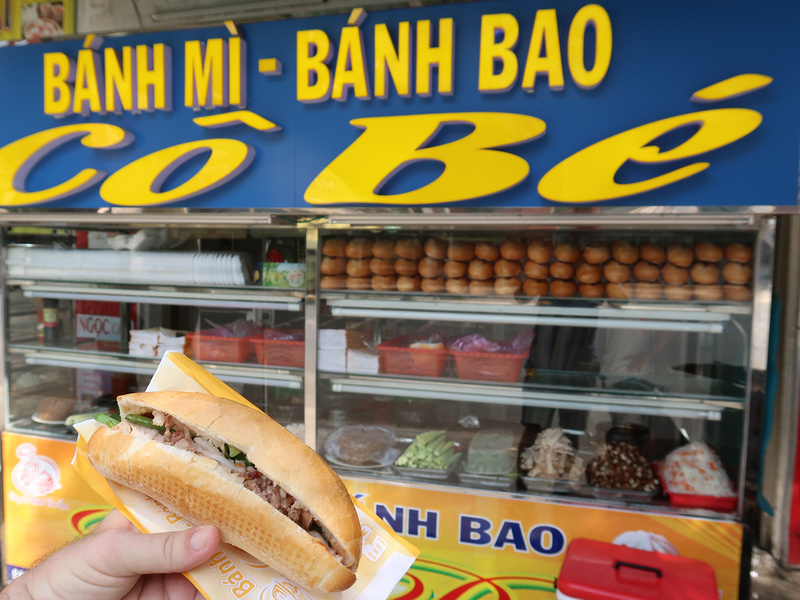 The rest of the time I just walked around and stopped if a place looked good. 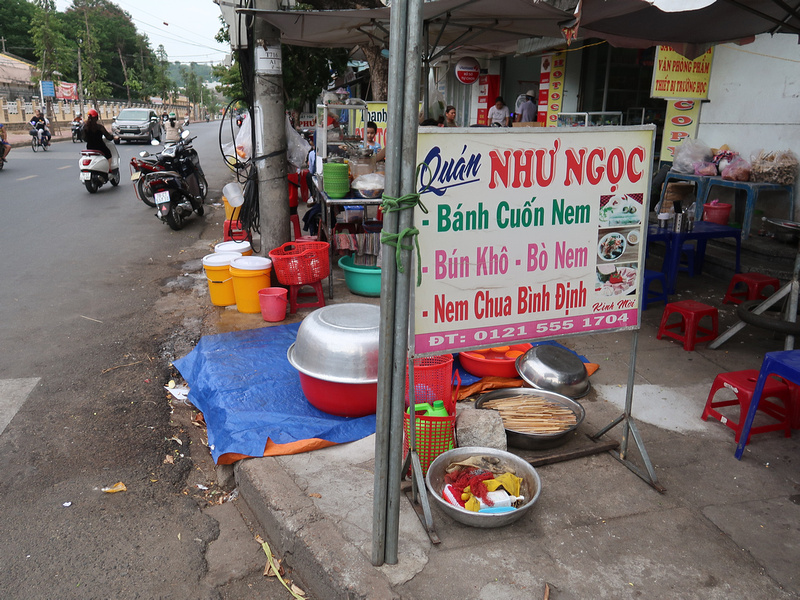 This Banh Cuon Nem at Quan Nhu Ngoc near the train station was a worthy afternoon snack. 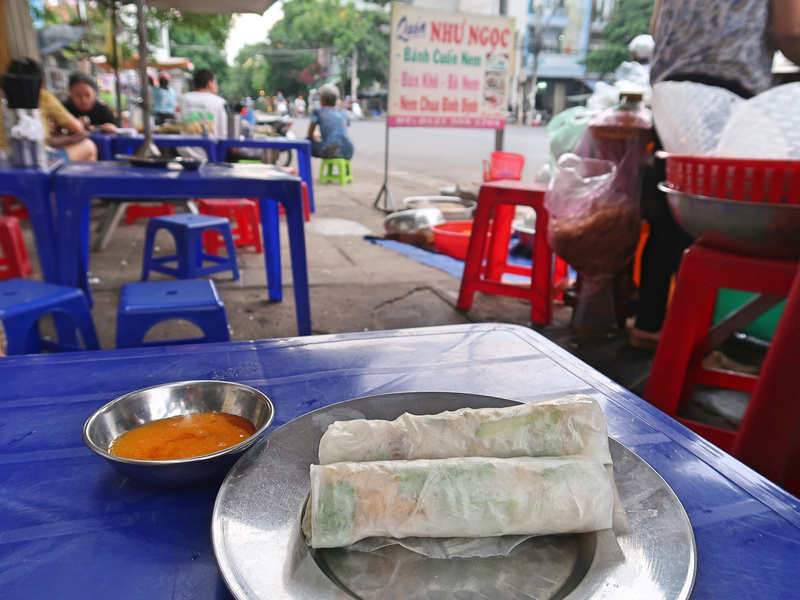 I was looking around for lunch and I saw a place at 189 Le Thanh Ton that was crowded, with more people sitting outside. If a place is this busy I usually sit down and ask questions later. 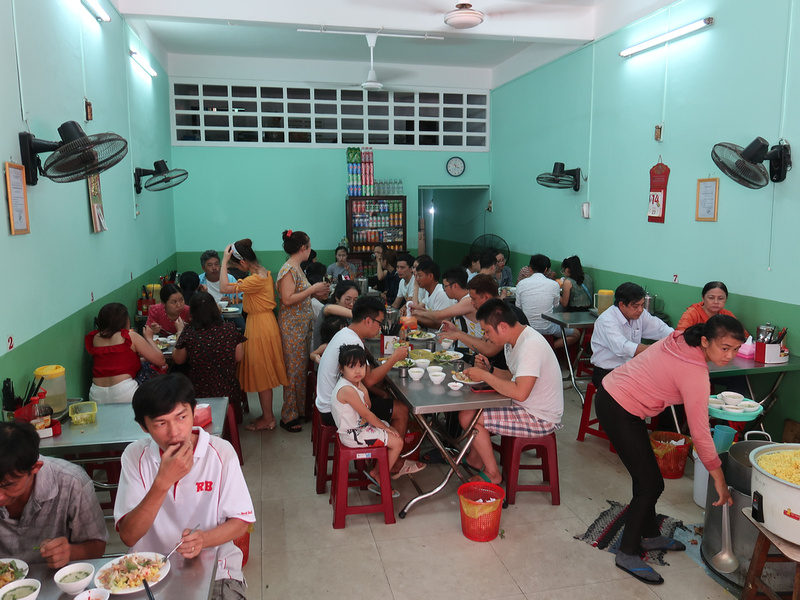 In this case it was a chicken and rice place that was worthy of such a crowd. 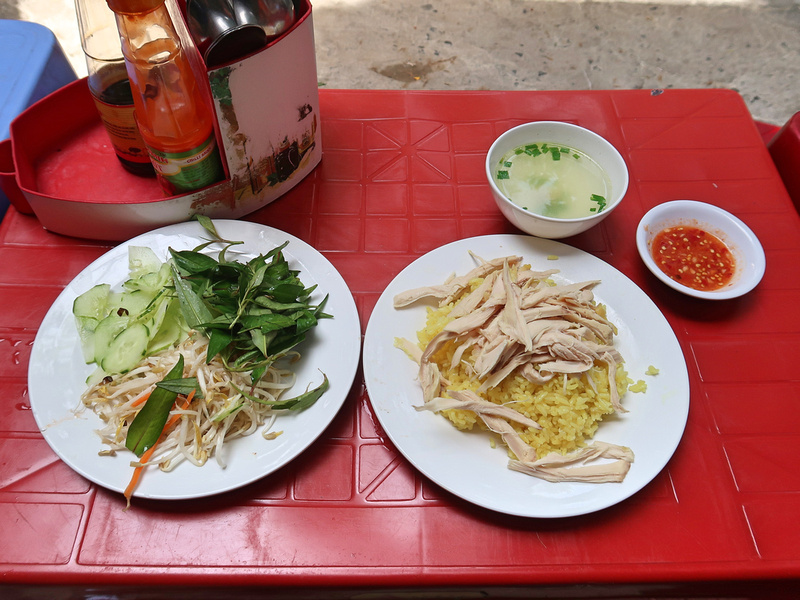 By the evening I walked back to the beach area, which turned out to be more lively at night. I keep forgetting that most normal people aren’t walking around in the midday heat. There are some cafe and bar streets like here on Ly Tu Trong. 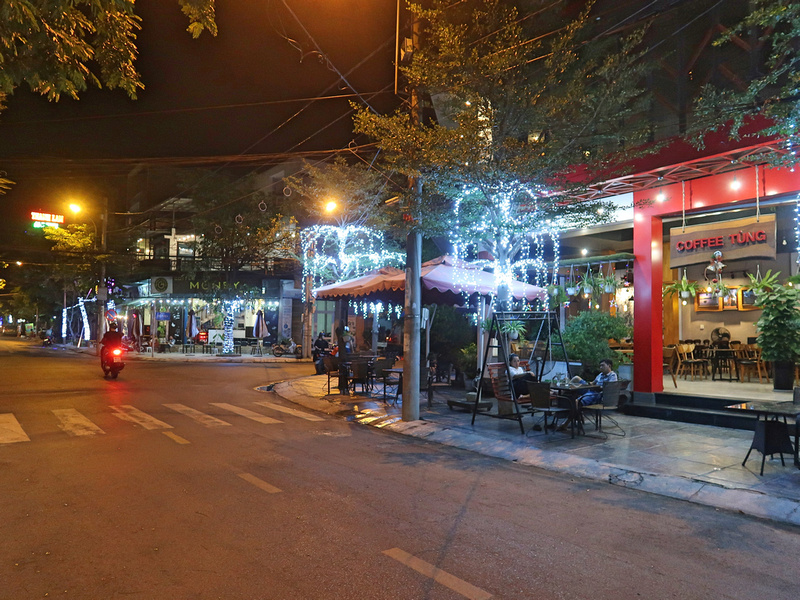 I had two days here overall. I rented a motorbike for half a day to visit some beaches and construction sites outside the city. It’s still mostly fishing villages on the beaches, though maybe this will change in the future. 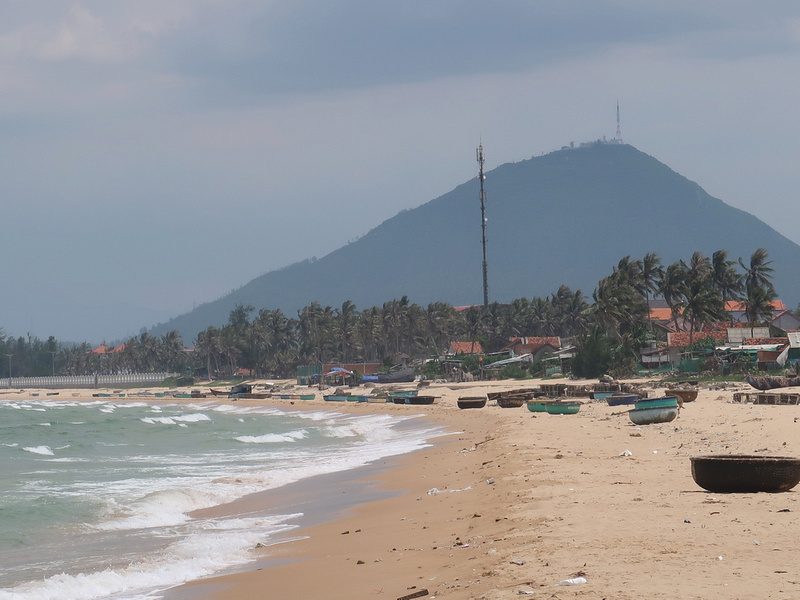 I enjoyed my time wandering around Tuy Hoa. Travel though is also a relative experience. How you feel about a place can be affected by other factors. In this case, I was still grateful to be able to travel again after the pandemic lockdown in April. The fact that I can travel here while much of the world is still grappling with the virus is not something I take for granted. 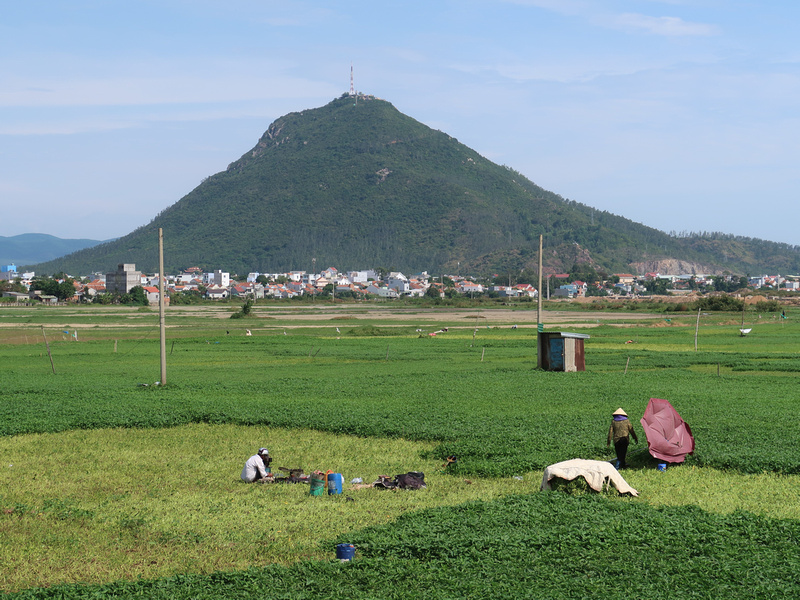 From Tuy Hoa I got a local bus to a fishing village with one of the nicest beaches I’ve seen in Vietnam. Stayed tuned for that update next week (or better yet, subscribe to my newsletter for post updates).