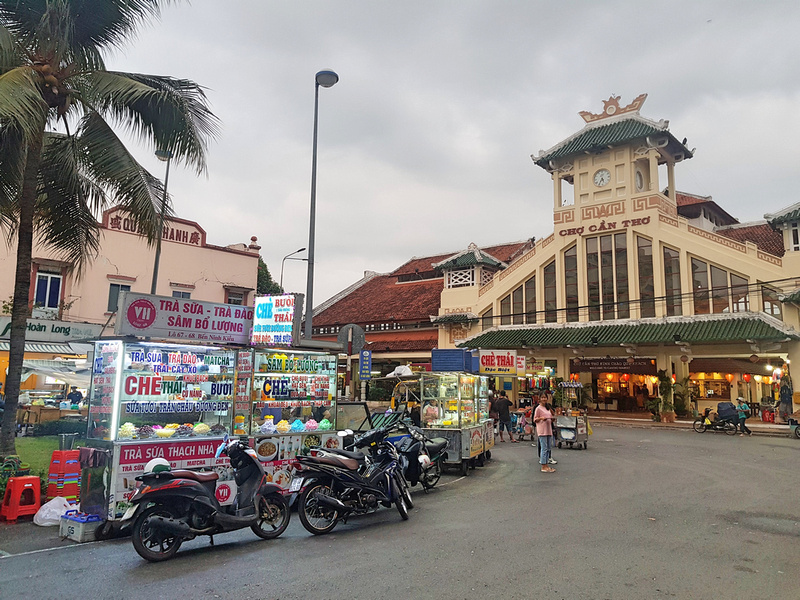 Can Tho is the fourth-largest city in Vietnam, and it’s one of 5 cities that’s an independent municipality at the same level as a province. From a tourists perspective it’s mainly seen as the jumping off point for the Cai Rang floating market and other trips around the Mekong Delta. 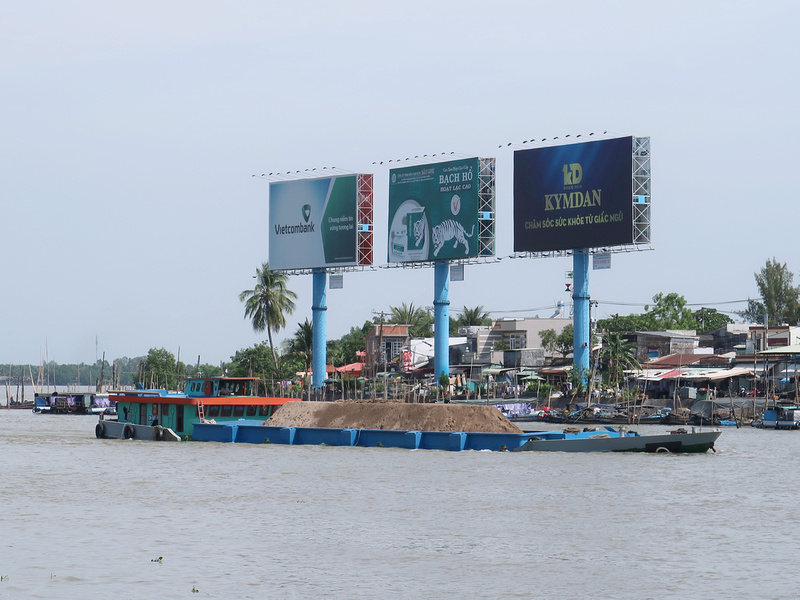 I’ve been to the market and had a taste of Mekong rural life, so for this trip I wanted to experience urban life in the largest city in the Mekong Delta. 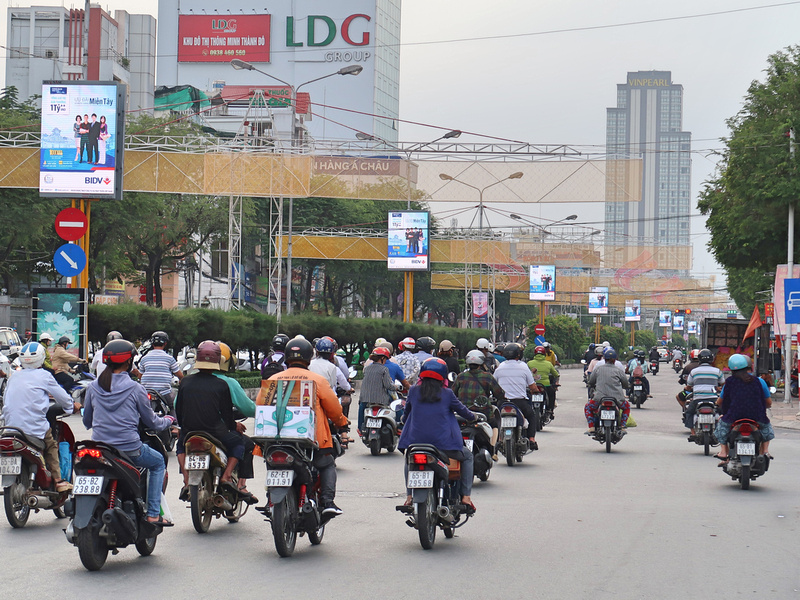 My main mission on this trip was to look for remaining heritage buildings, eat street food, hang out in cafes, and just observe what provincial city life is like. 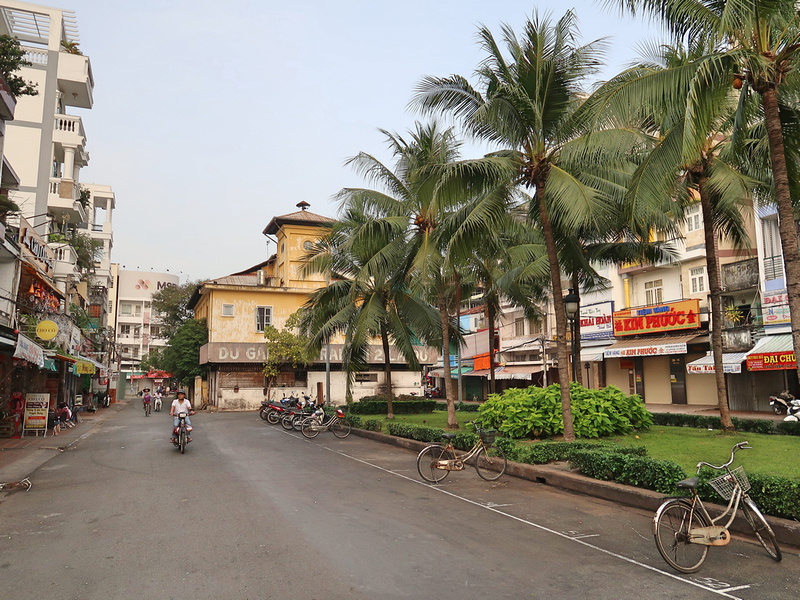 The city sits on the junction of the Can Tho River and the Hau River (a distributary of the Mekong River). Near this junction is the old riverfront area, where the most historic buildings can be found. This is the best place to stay in Can Tho if you are here for a short time. 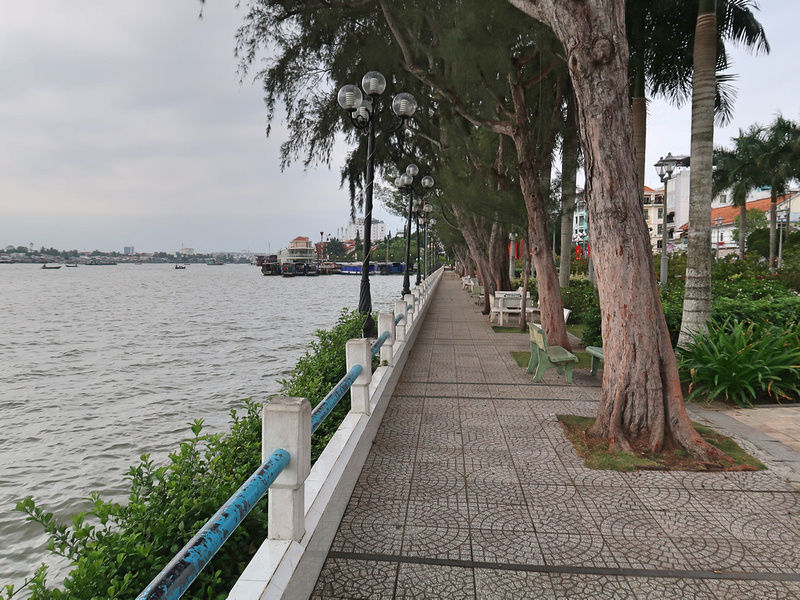 Before Can Tho I was in Tra Vinh, which has a collection of old buildings that hint at what must have been an attractive riverside trading town. In Can Tho it’s much the same, with some remaining old buildings giving a clue of its former glory.

The old riverside market has since been turned into a tourist market.

A common site in Vietnam is colonial-era houses that have been cut in half or thirds without any consideration for the building. Some buildings are just continually modified over the years until very little is left of the old structure. 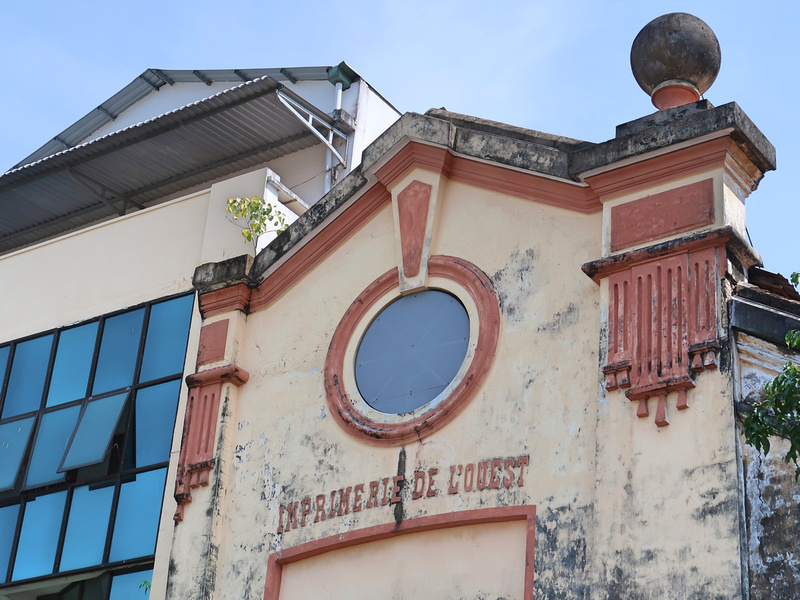 Like Tra Vinh, I wondered what might have been if Can Tho had been able to preserve more buildings. 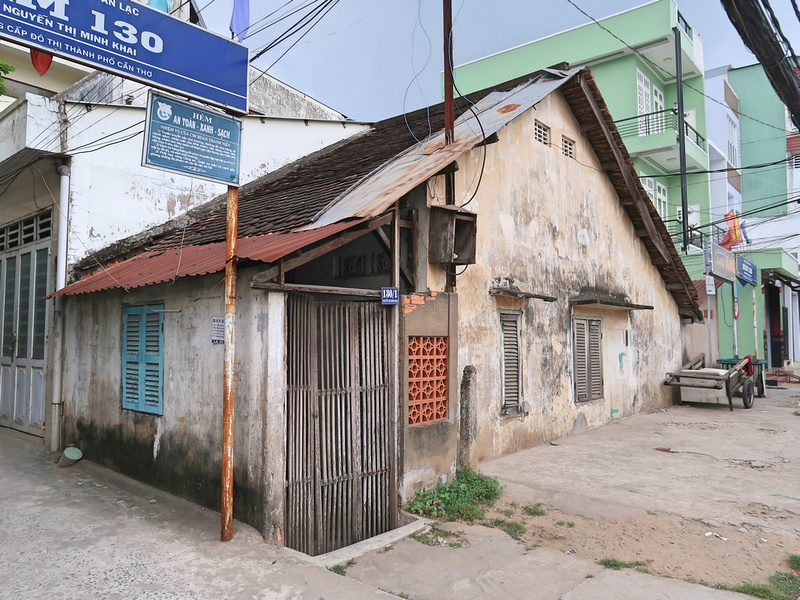 This row of shophouses on the riverfront at Hai Ba Trung survived being carved up. 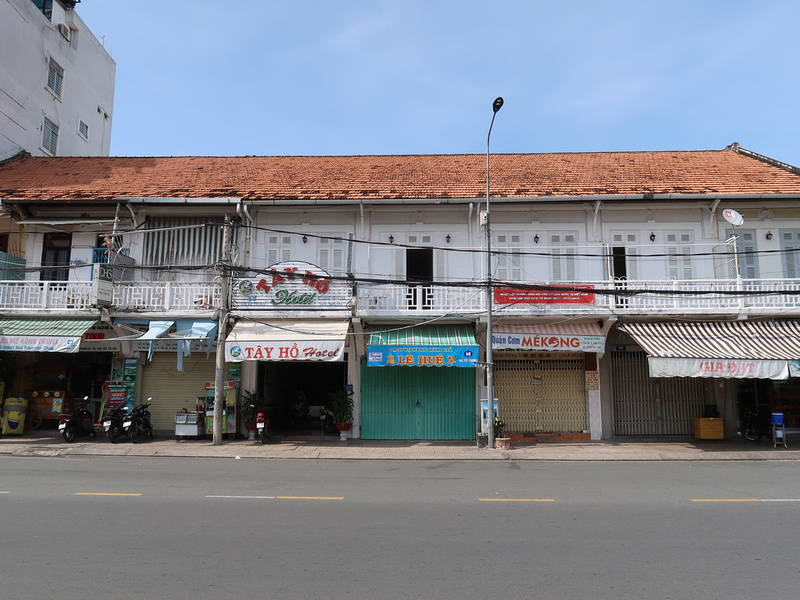 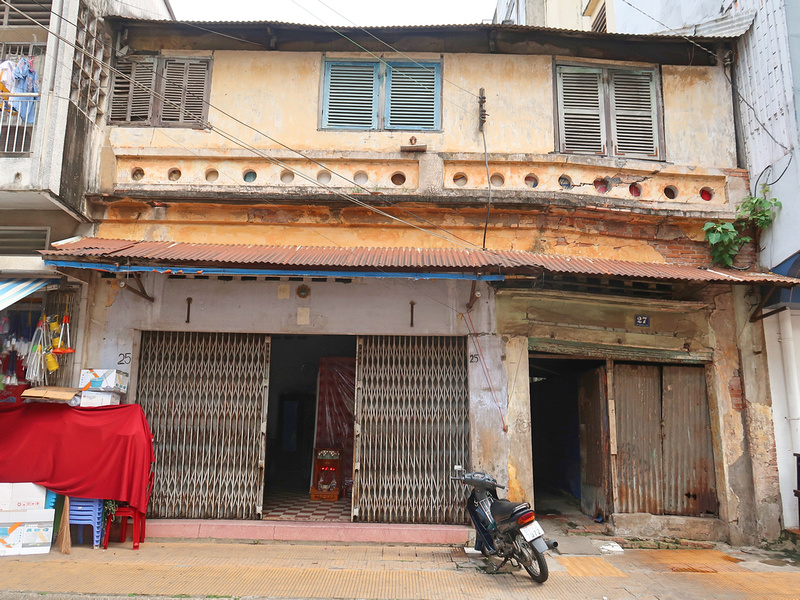 There are some reasonably intact old houses hiding behind walls and other extensions. 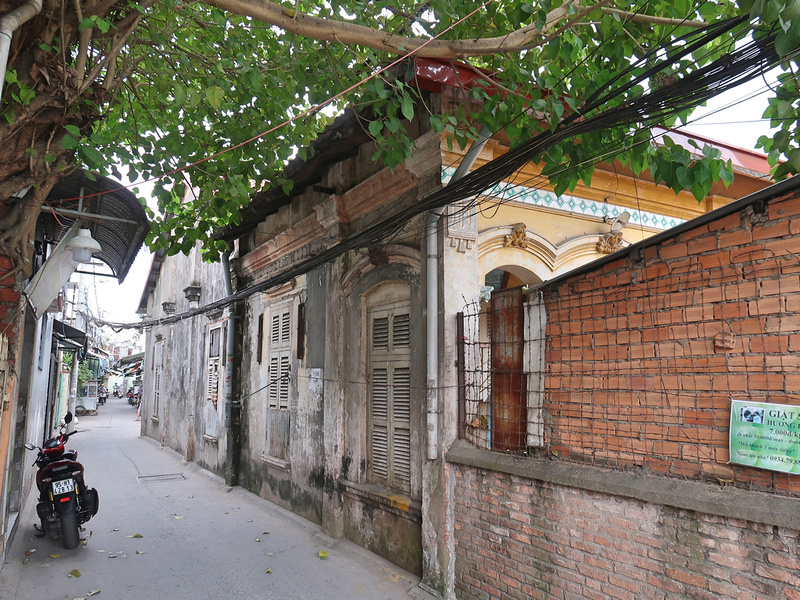 The old prison is one of the main tourist sites by the riverside. 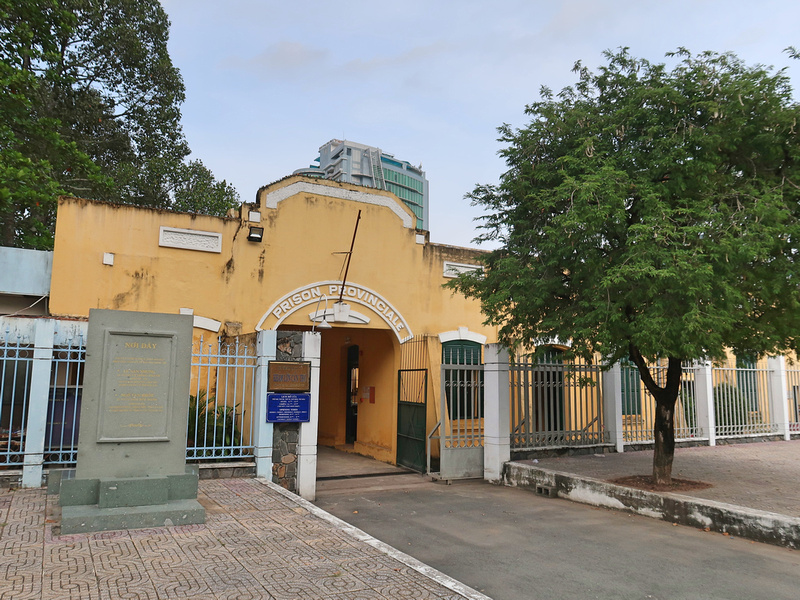 In 2016 the Can Tho Pedestrian bridge opened, making the riverfront area more lively at night. 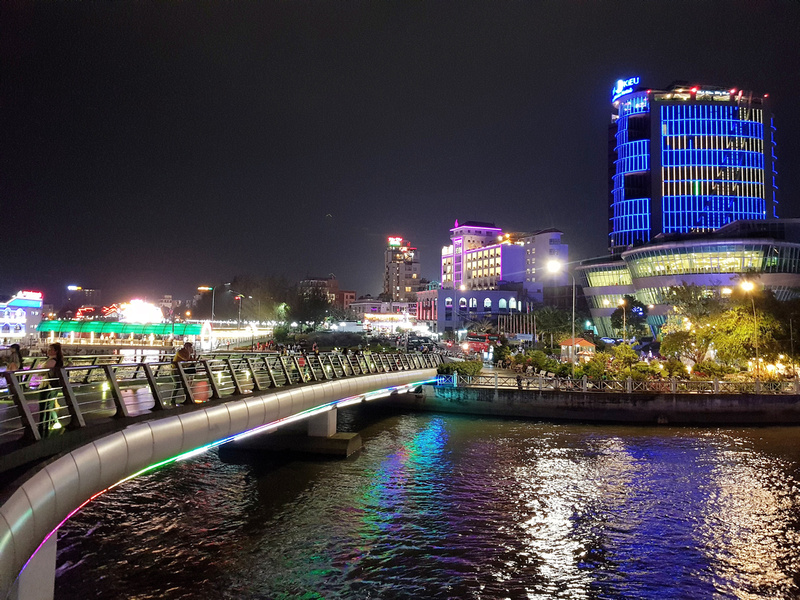 The statue of Ho Chi Minh by the Can Tho River. 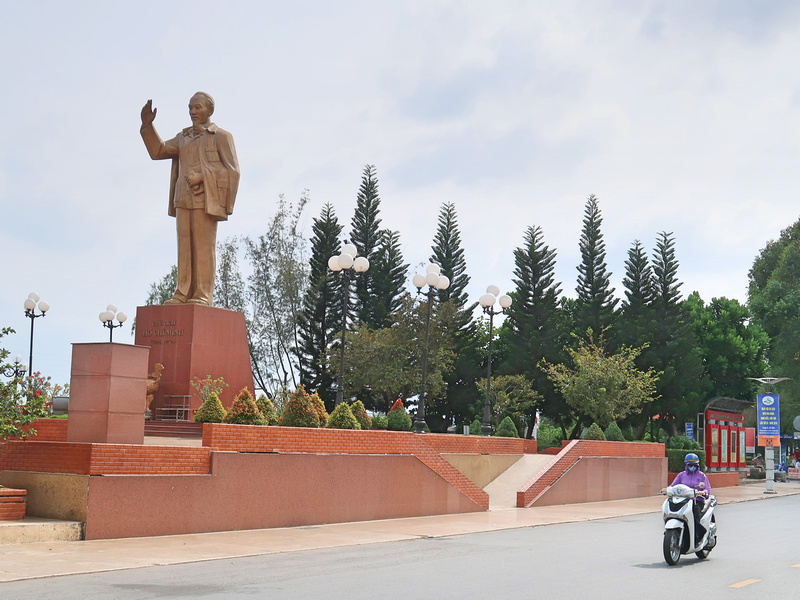 Vin Group has made its mark here, as it has done in most cities in Vietnam. Like Hue, Dong Hoi, and Haiphong, the tallest building in Can Tho is a Vinpearl Hotel. 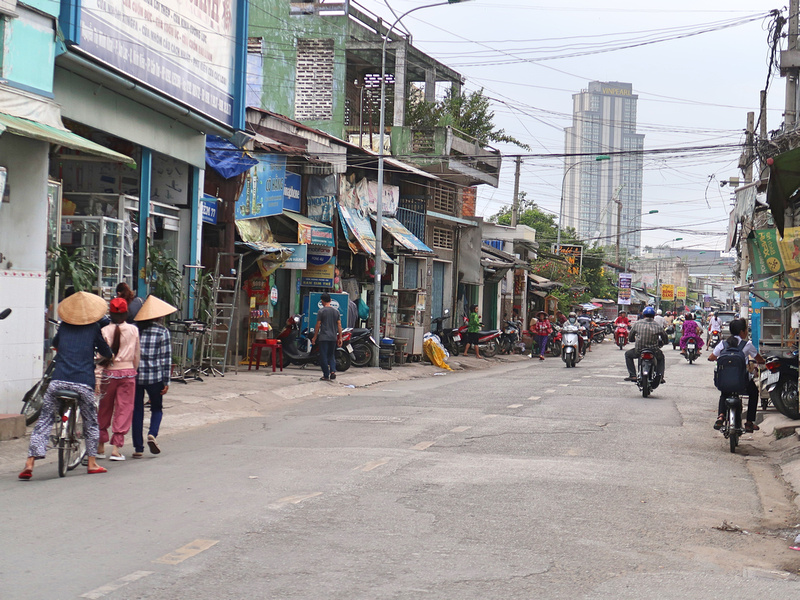 A potential city landmark in development is the oddly named Stella Mega City project. This new urban area is near the airport, and I went out for a look to post it on my Asia development website. 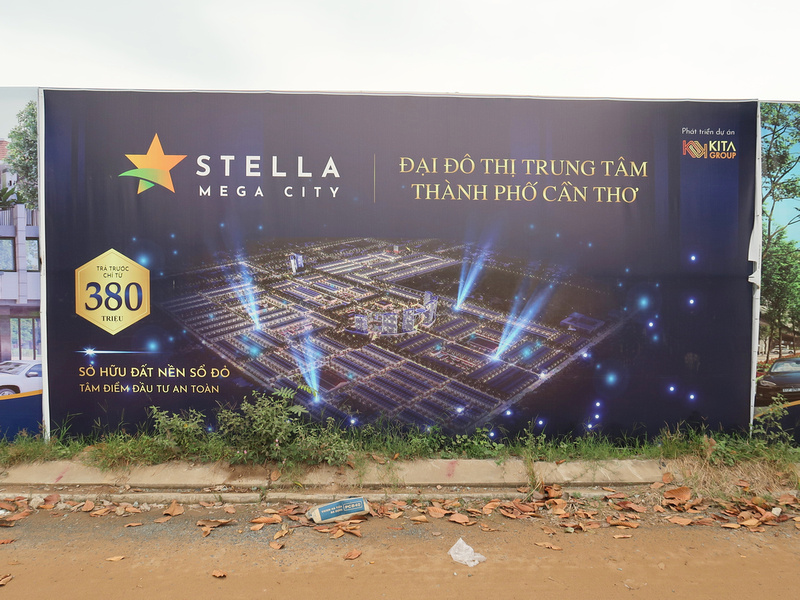 These mega projects with cookie cutter housing developments are becoming all too common in Southeast Asia, and I’m writing a report on such places. 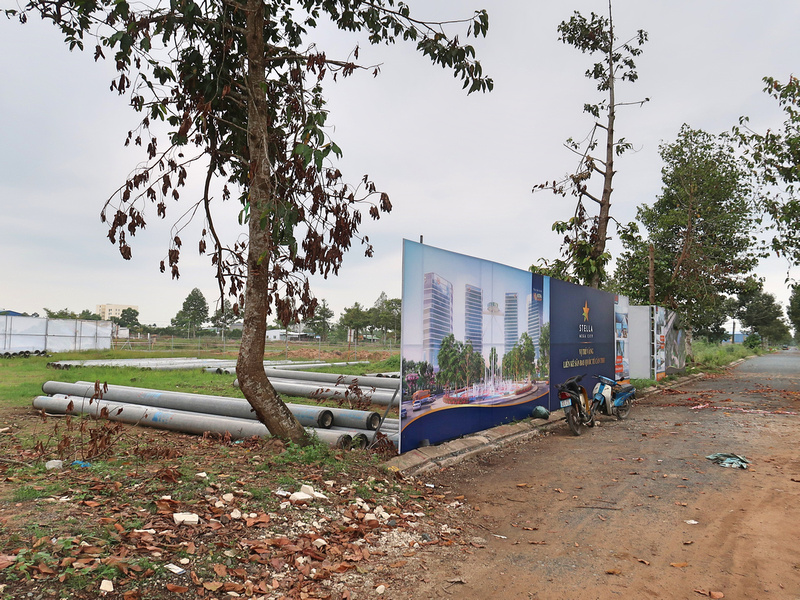 Visiting these sort of places at least gets me out of the city centre, and on the way back I got off my motorbike taxi in the city centre, which is a few kilometres from the river. Here it feel more like a working city away from all the travel agent shops on the riverfront. I went back here at night to see Can Tho nightlife, and there were some big bbq and beer bars and nightclubs. 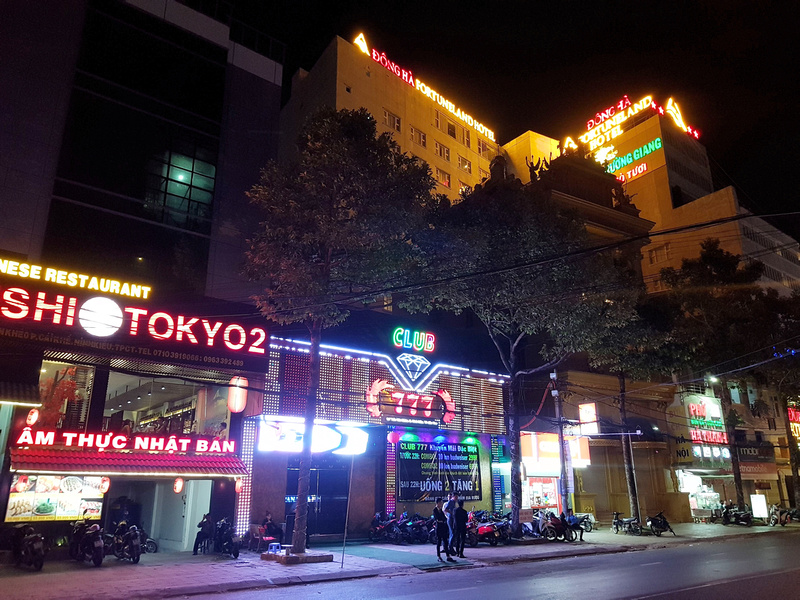 There was something about Can Tho that I couldn’t put my finger on during my first visit. On this trip I realised what an isolated city it is for a city this size.

Can Tho is on the southern branch of the Mekong River, and to get to Ho Chi Minh City requires crossing two major branches of the Mekong. River crossings were still done by ferry up until 2010 when the Can Tho Bridge opened. Even with the bridges the 160km journey still takes 3.5 hours. 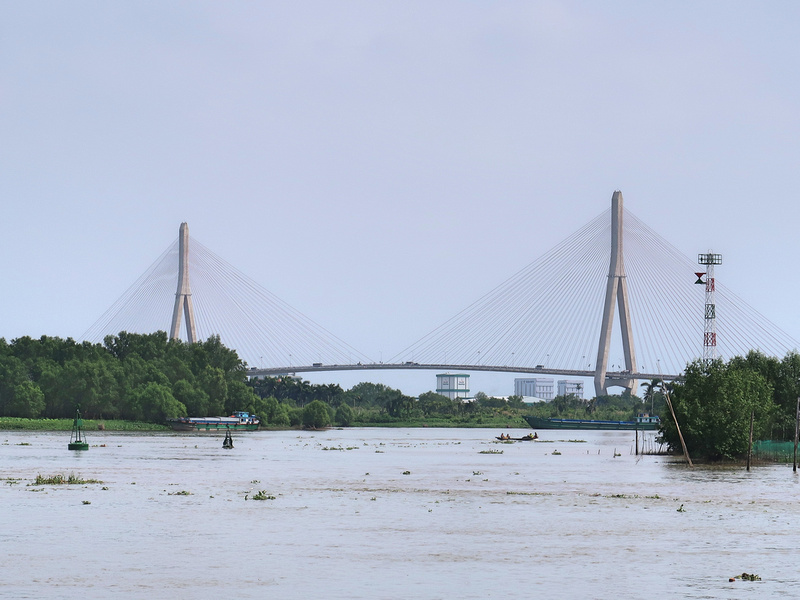 Can Tho only got its first international flight in April, 2019. Before that it’s only international connection was the bus and boat combo from Phnom Penh.

The international connections have since improved, with flights to Seoul and Taipei planned.

Another reason it feels isolated is that it’s not on the national railway network. When the French were building railways they got as far as My Tho. The multiple wide river crossings made building a railway into the Delta too costly and physically challenging.

There have been numerous plans to connect Ho Chi Minh City with Can Tho by high-speed train, and there was even a proposal to then extend that line from Can Tho to Phnom Penh.

I made a map of what Southern Vietnam and Cambodia might look like if these proposed railways went ahead, which I posted in detail here.

In addition to not having international flights until recently, there is a lack of international brands. There are local chains like Highlands Coffee (the Starbucks of Vietnam), but apart from Jollibee and KFC (fried chicken is everywhere these days), the only international chain I saw was Circle K. 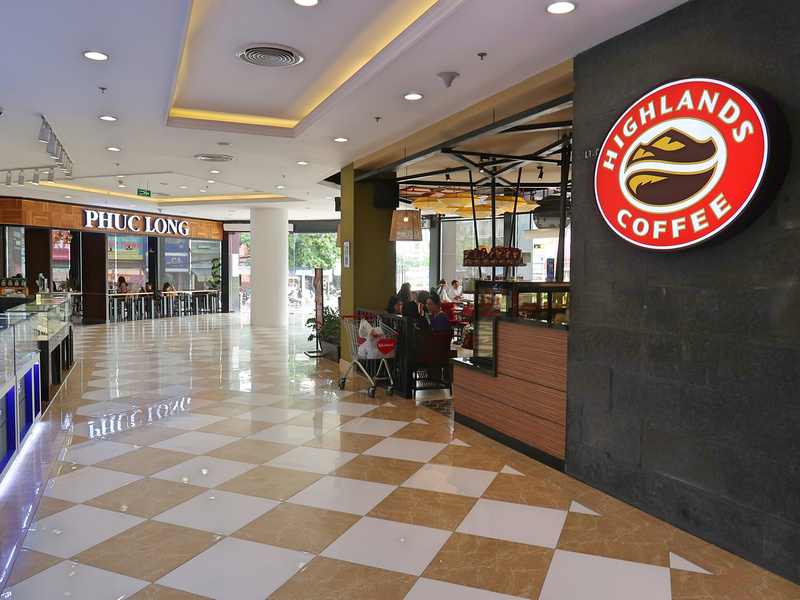 There are few expats here, and up until 2019 it still hadn’t registered a page on Nomad List.

I think in the next few years with more international flights being added there will be more cool cafes and international eateries. One place to watch is the area around the Xang Thoi Lake. There are numerous cafes here, so just walk around the lake until you see one that takes your fancy. 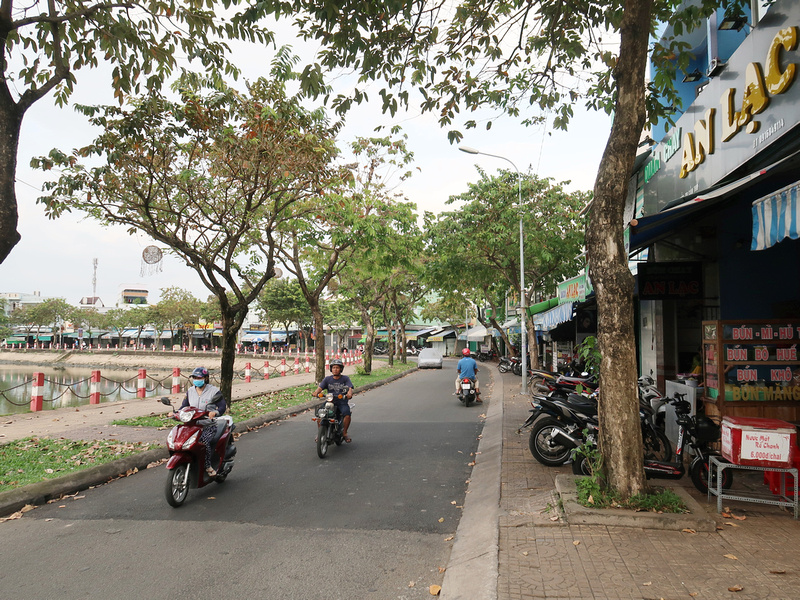 The little streets around the Khmer pagoda are also accumulating some interesting shops and cafes. 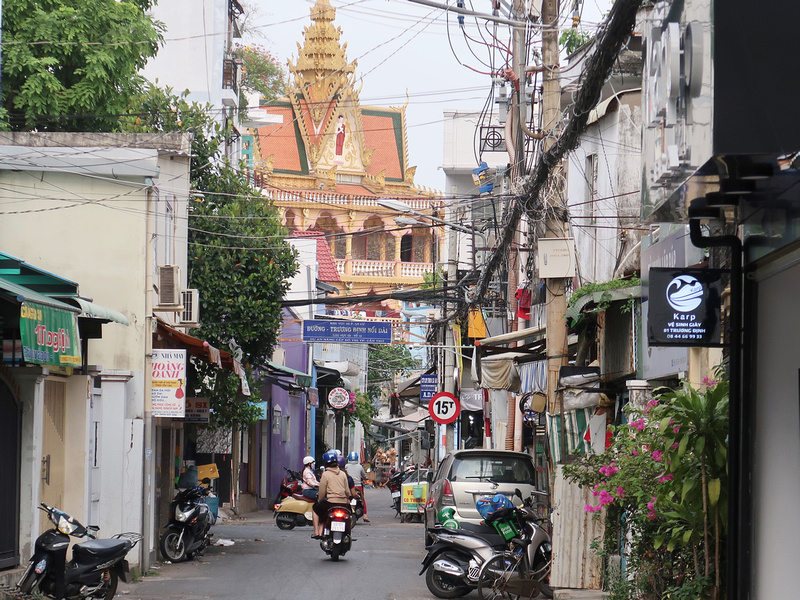 Can Tho reminds me of what Vietnamese cities looked like not too long ago. 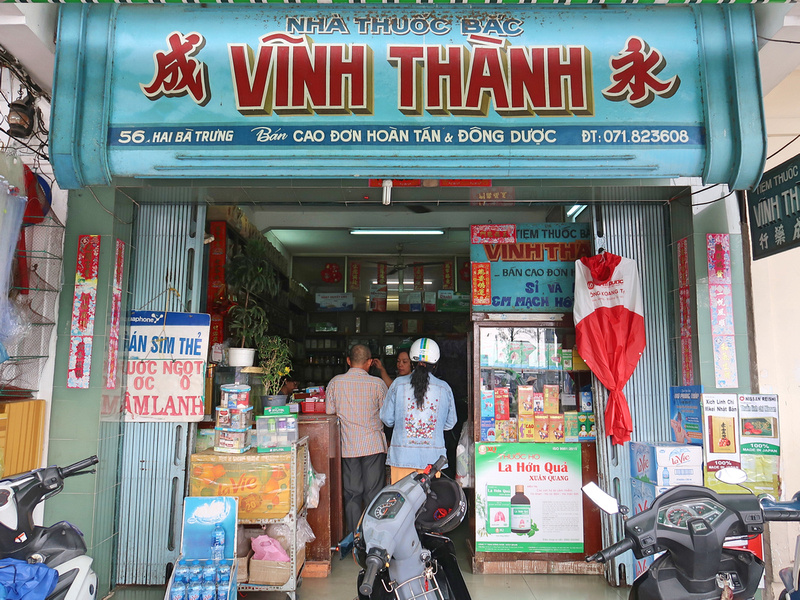 I saw this Con Dao ferry parked at the main pier and I was wondering why I had never heard of such an interesting ferry route before. I hadn’t because this service was being launched just after I left. This now adds another travel option from Can Tho. 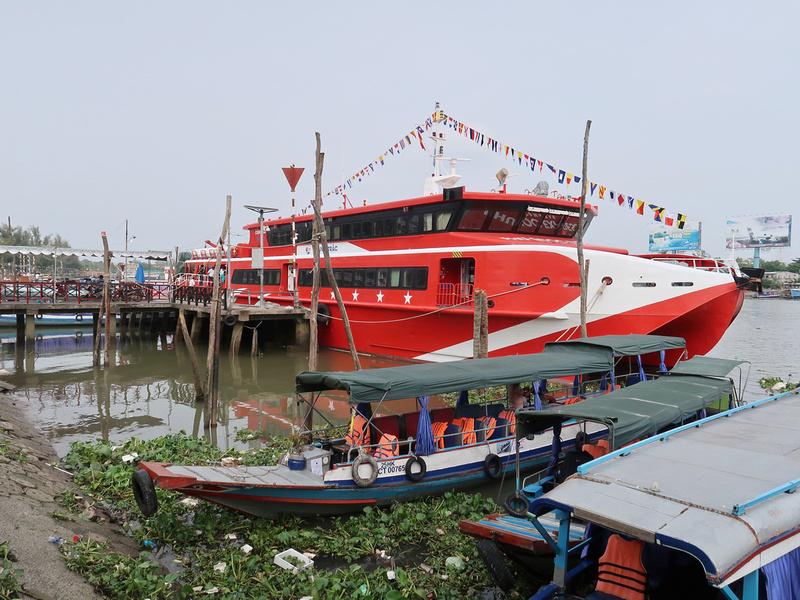 From Can Tho I got the bus back to Saigon with Futa Bus. They provide a pickup service from your hotel and the buses are new and services are frequent. 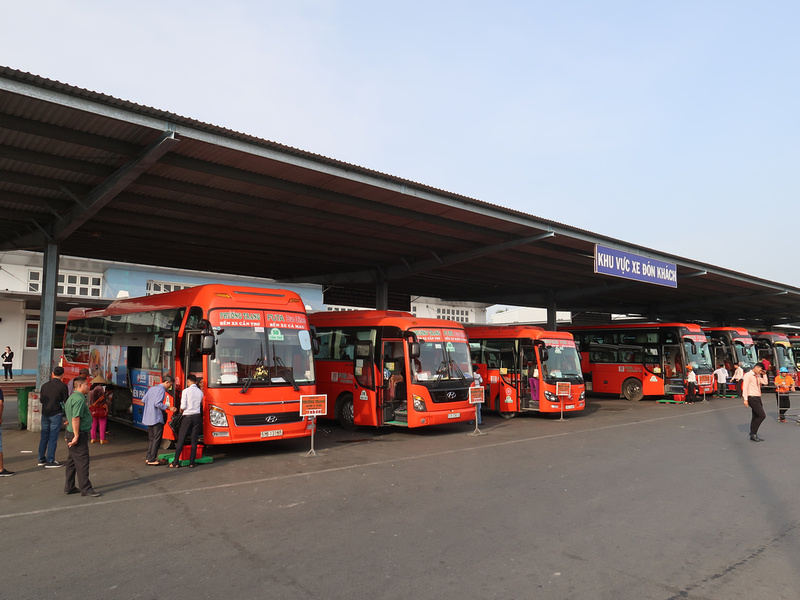 Can Tho is a big city that still has a rural heart. I still have some more places I want to visit in the Delta, so I will probably come back via Can Tho. 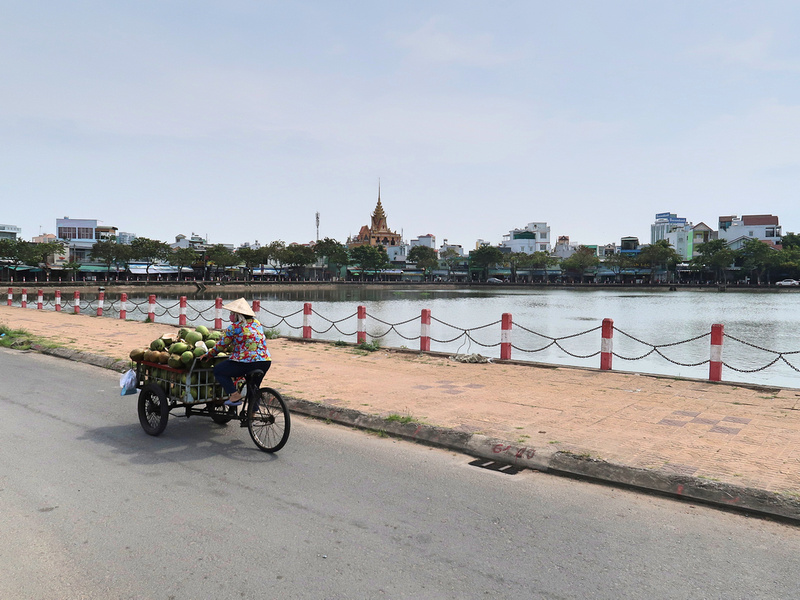