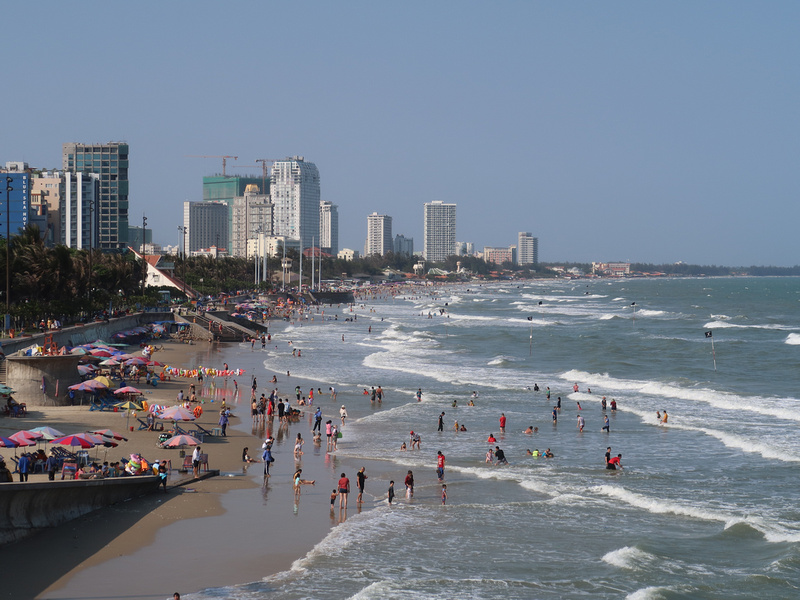 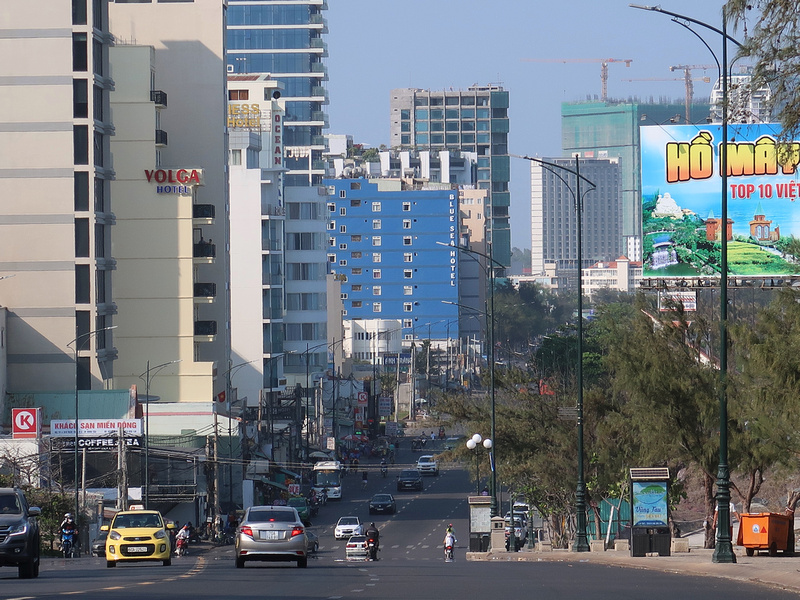 [A Saigonesque skyline is growing on the Back Beach road of Thuy Van.]

Being based in Saigon I’ve been to Vung Tau a number of times now. Vung Tau is an easy city escape with the least amount of travel friction. There is a passenger ferry that leaves from the riverfront in District 1, so there is no trek to an outer suburban bus station. The fastest ferry is about 2 hours, and it drops you off near Front Beach of Vung Tau. It’s so easy I don’t know why I don’t do it more often. 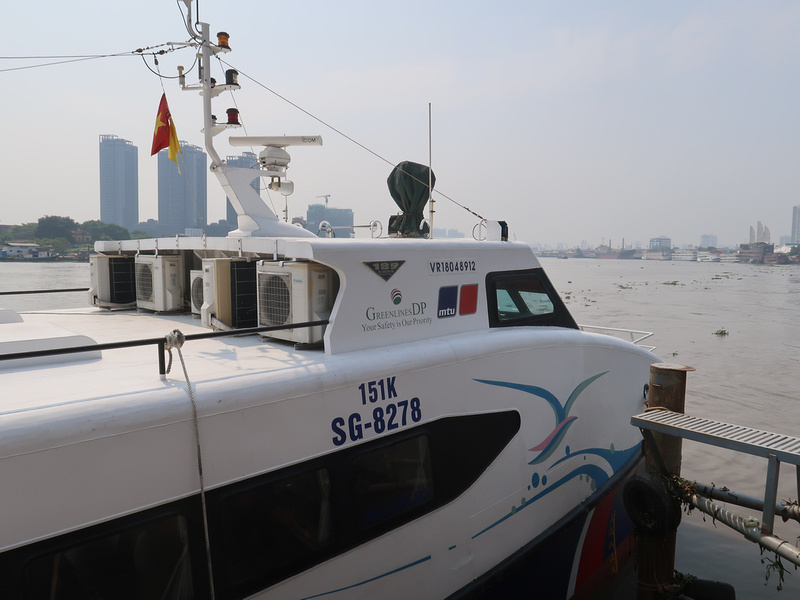 Every time I’ve been to Vung Tau it is during the week. I usually plan my travels to avoid crowds. It makes more sense if I have travel flexibility to go during off-peak times.

This trip was the first time I’ve been on the weekend. It was a last-moment trip, where I booked a ferry ticket on Friday and went on Saturday morning. I didn’t think much about it being the weekend until I was looking for accommodation. Of the hundreds of hotels listed in Vung Tau, there were only a few left in the popular Back Beach area.

Here is my trip report of my weekend in Vung Tau.

Places mentioned in this article are marked on this map.

Not only is the ferry the easiest way to get to Vung Tau, but it’s also a great way to see the river system of Greater Ho Chi Minh City. 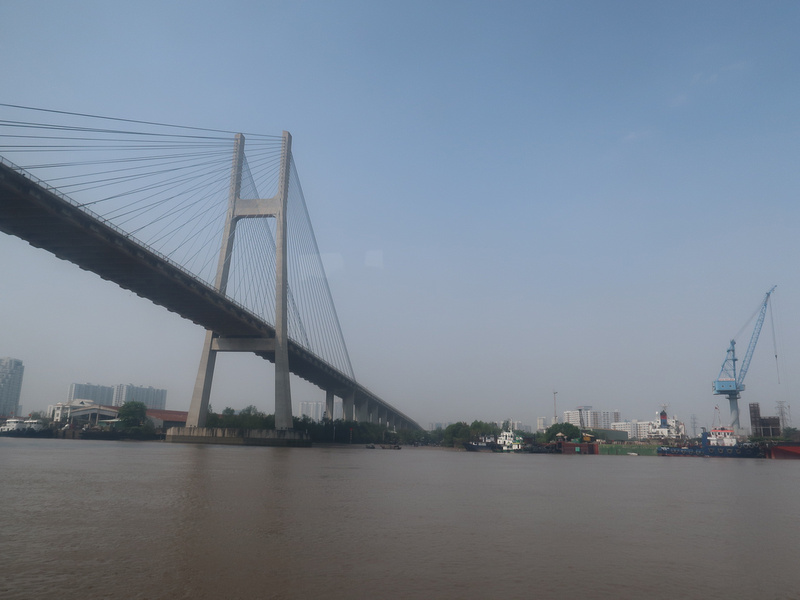 The ferry terminal in Vung Tau is close enough to walk to the Front Beach, and there are reputable taxis (Vinasun and Mailinh) and Grab available here to get to the Back Beach. 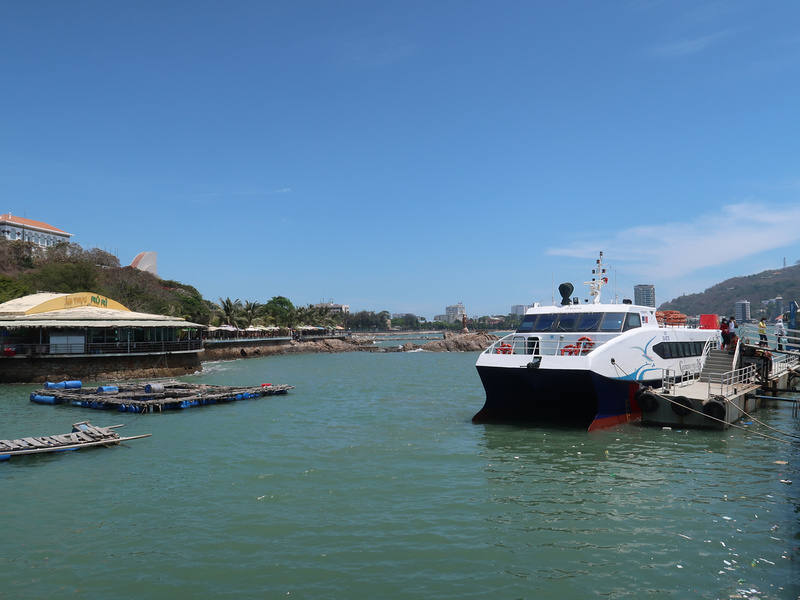 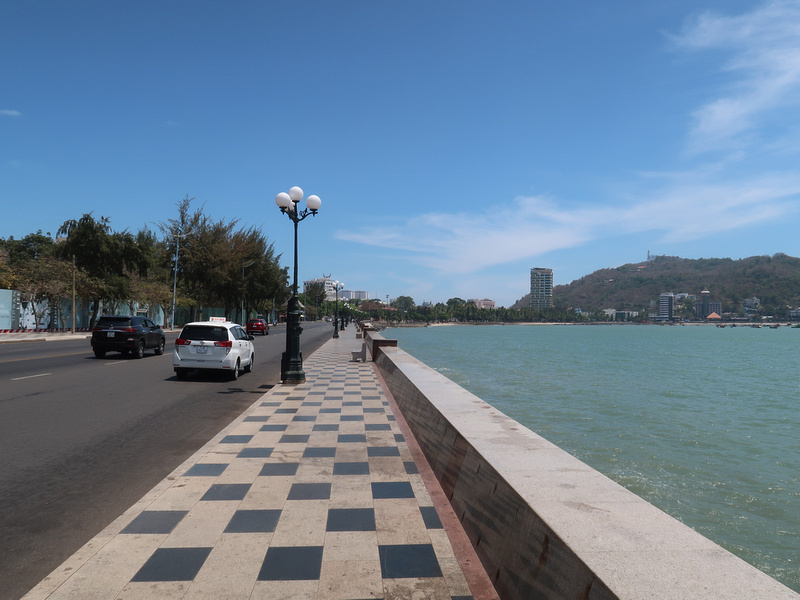 [The walk from the Greenlines ferry port to Vung Tau.]

I’ve been to Vung Tau enough times now to have formed some traditions, and one such tradition is that my first meal back is Banh Khot Vung Tau.

I walked to the most famous Banh Khot restaurant (Quan Banh khot Goc Vu Sua), and there was a queue of people waiting to be seated. This was the first time I’ve seen a queue here, and I was too hungry to wait around. I went to Banh Khot 14 nearby which was also busy, but they squeezed me onto a table. 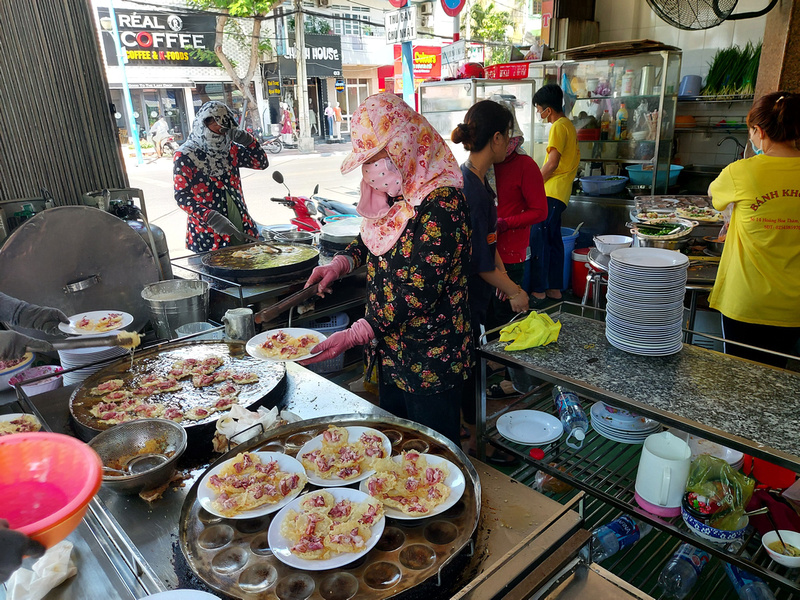 I went to this restaurant in 2019 with my friend Robert Reid on a midweek day trip. There was no one in the restaurant on that day, so it was hard to tell if it was any good. For places I’m unfamiliar with, seeing a busy crowd is an easy way to pick a place. We took a chance and we were rewarded with great banh khot. 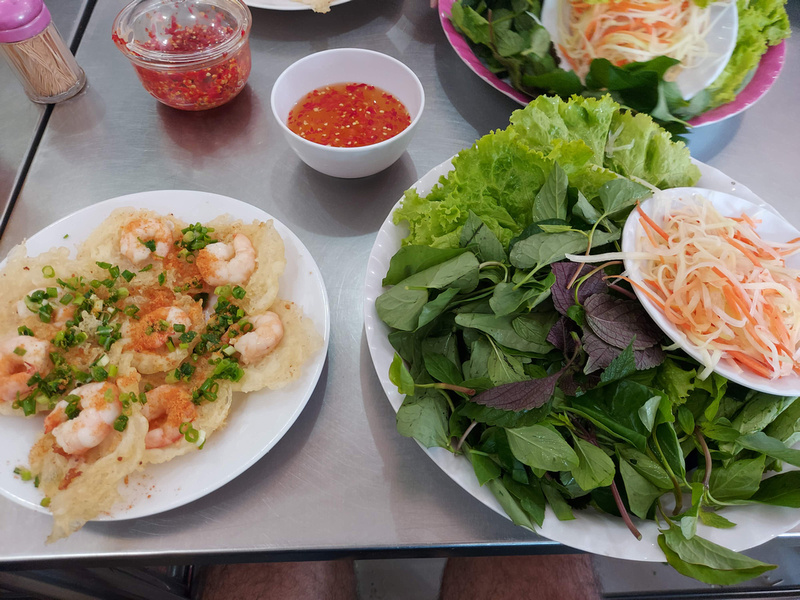 Near the famous Banh Khot place is a famous salted egg sponge cake shop that I didn’t realise was famous. I also went here with Robert in 2019. We were just walking by and the cakes looked yummy enough, so we bought a box which can be easily eaten in one sitting for two people. 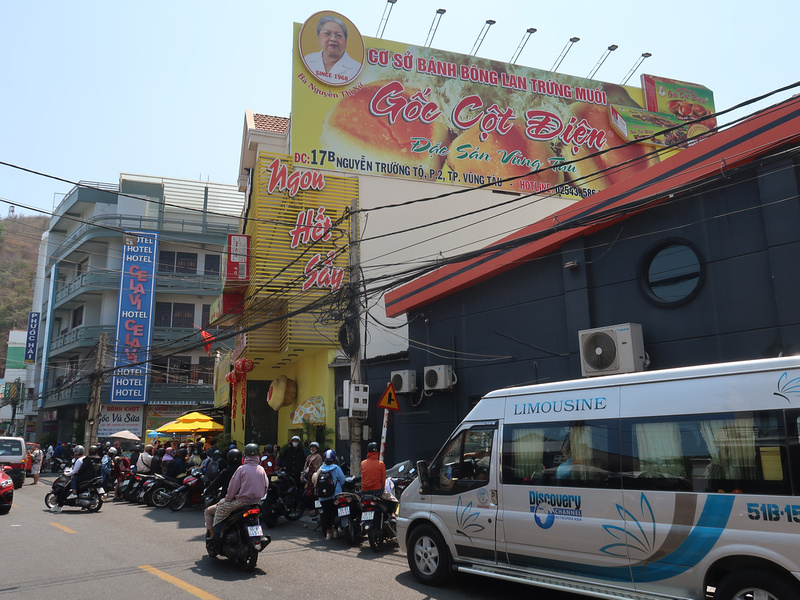 This time around there was a queue of people waiting to buy boxes of cakes. It seems like the thing to do when you come to Vung Tau is to have banh khot, and then get sponge cake next door. Maybe it’s a thing that Saigon parents do for their children, keeping a tradition alive for when they used to come to Vung Tau as a child. 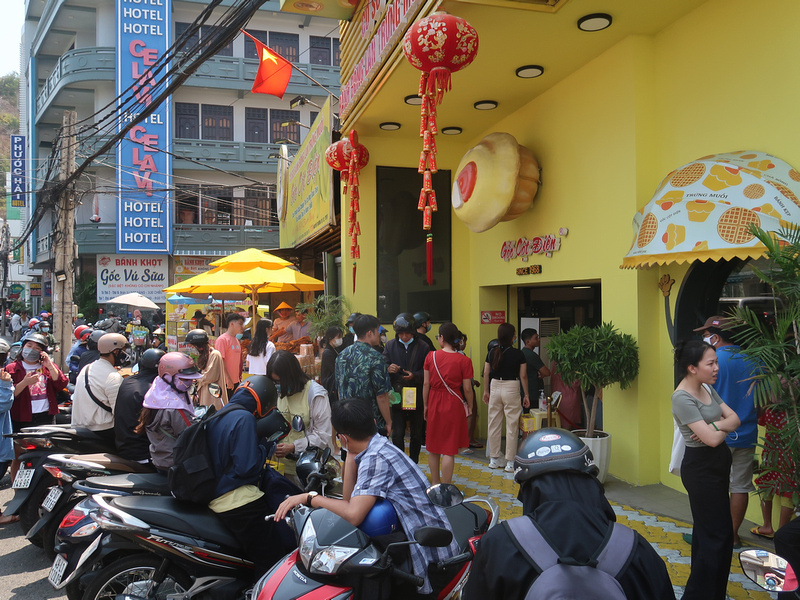 I went by a fish market and you could barely move there were so many people here. 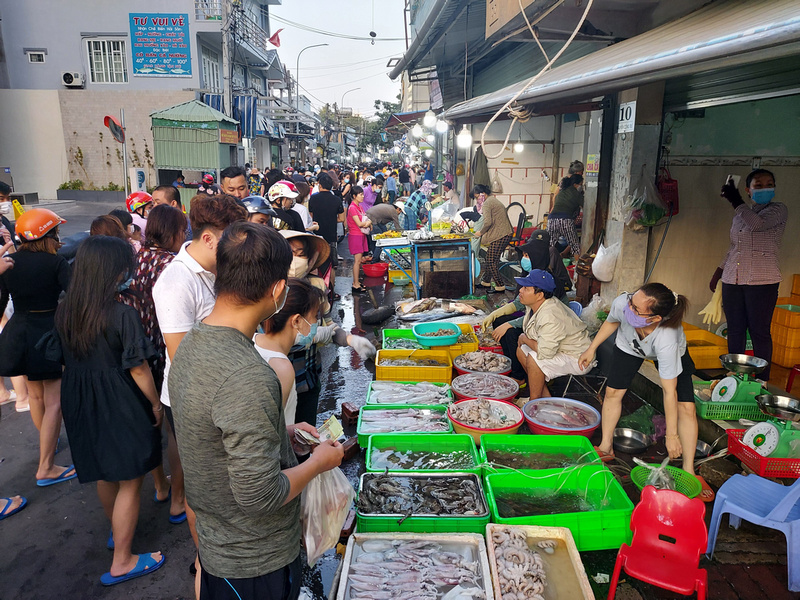 The traffic was noticeably busy as well. On Hoang Hoa Tham, the main road that connects the downtown area to Back Beach, the road was backed up with traffic leaving on Sunday afternoon. 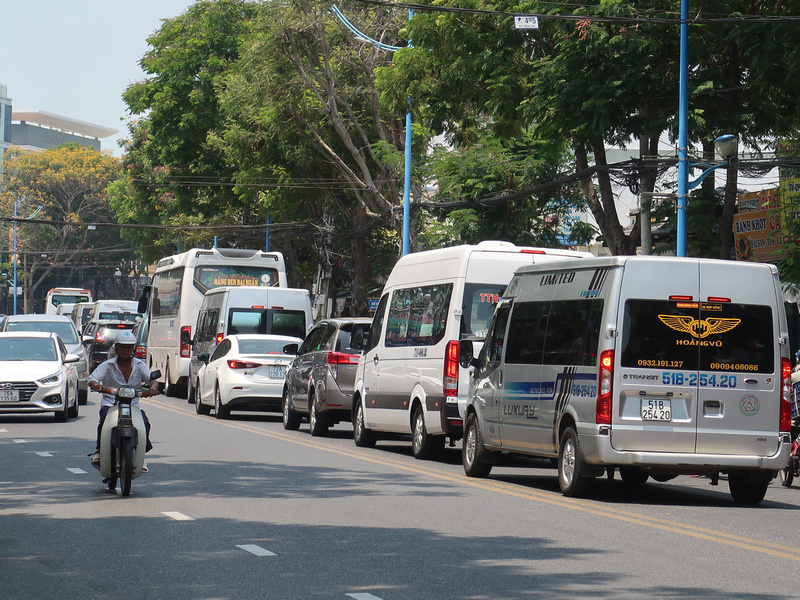 The small road that leads to the hill overlooking the city (where the Jesus statue is), was also backed up with traffic. Most of this traffic would be Saigonese weekenders. I don’t know the numbers, but it would be unlikely that people from Hanoi or Vinh or anywhere else in the north would come here. 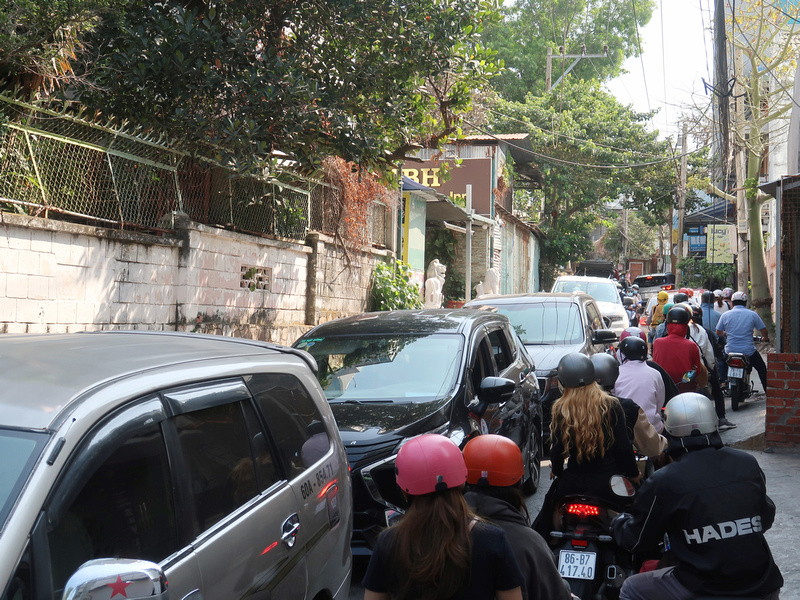 In the morning, the back streets of Back Beach are filled with people. This is where all the budget hotels are. I’ve stayed around here before when there was no one here, and I wondered how so many hotels stayed in business. It appears that the hotels make their money on the weekend. 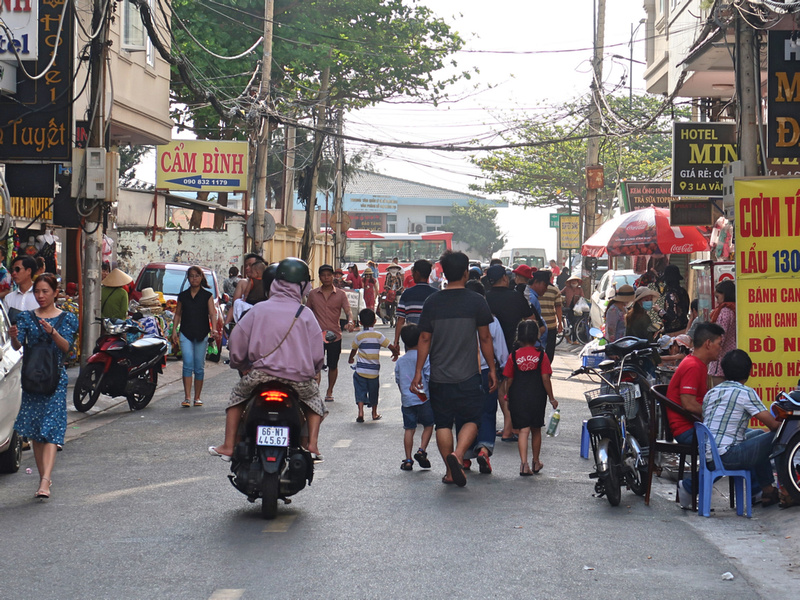 It was at the beach where you could see the weekend crowds in full force. If you want to see what a busy beach looks like in Vietnam, go in the morning before it gets too hot. 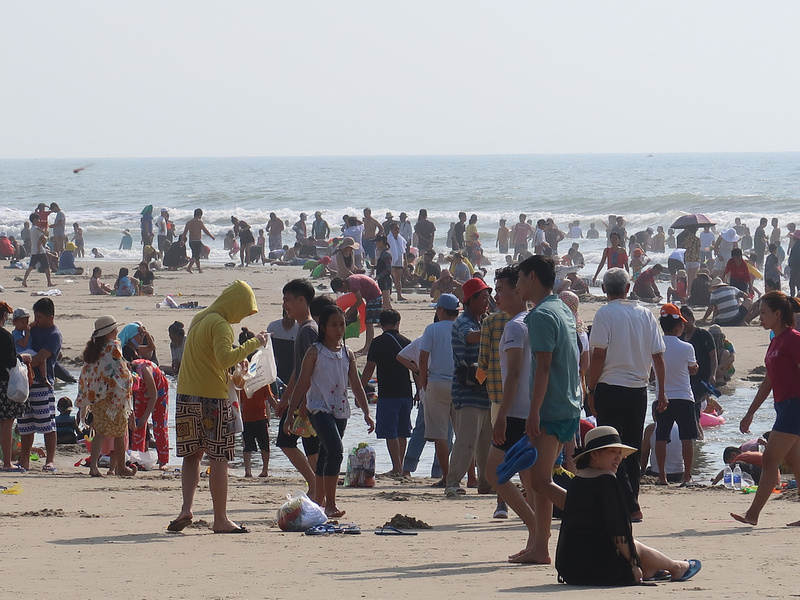 The beach scene here reminded me of being at Cox’s Bazaar in Bangladesh during a national holiday. There was no holiday here though, just people celebrating the weekend in a land that has so far been able to contain the pandemic. 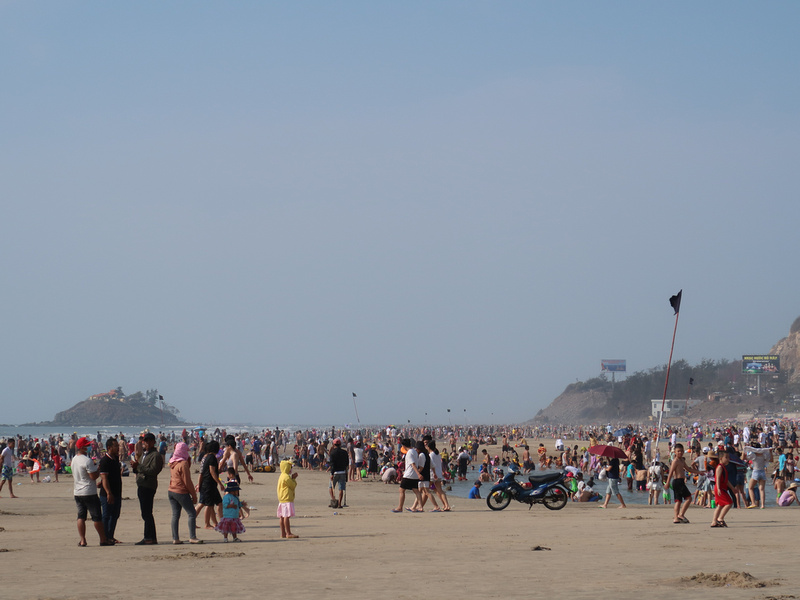 [Of course there is a motorbike on the beach in Vietnam.] 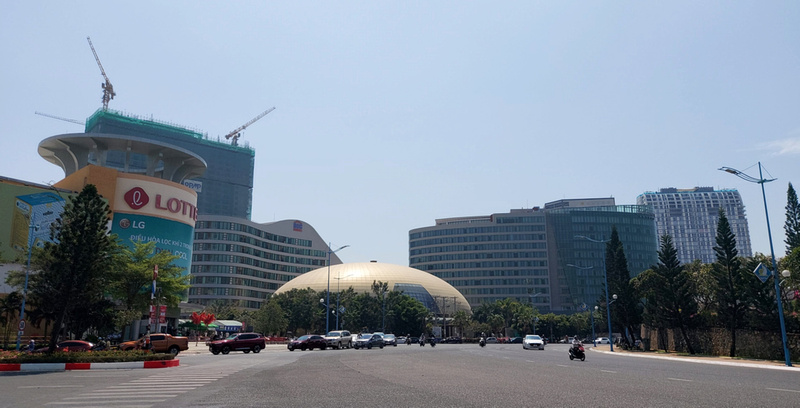 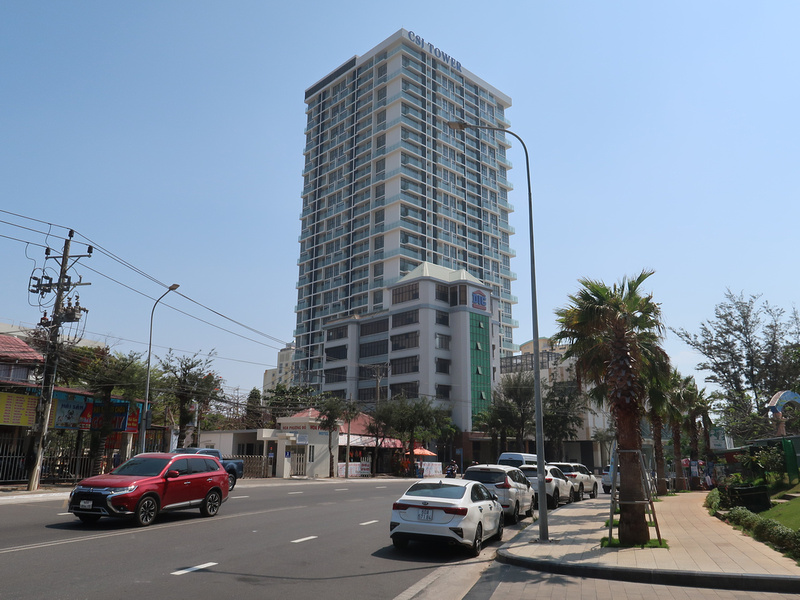 Vung Tau will also be more appealing as a base in the future when the second airport for HCMC opens. This new airport at Long Thanh is closer to Vung Tau.

One project that has not happened yet is the proposed railway from Vung Tau to Bien Hoa, which would connect to the main North-South line. A train to Vung Tau would turn it into a commuter suburb. 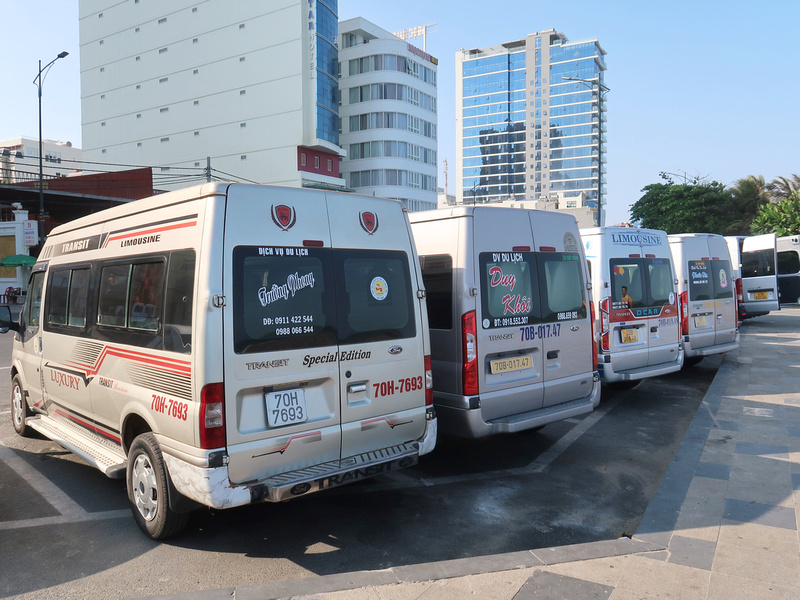 [A convoy of vans that shuttle between Vung Tau and Saigon.]

As always, I’m always on the hunt for cool cafes. The best coffee in Vung Tau I’ve found so far is at Cariban Coffee. 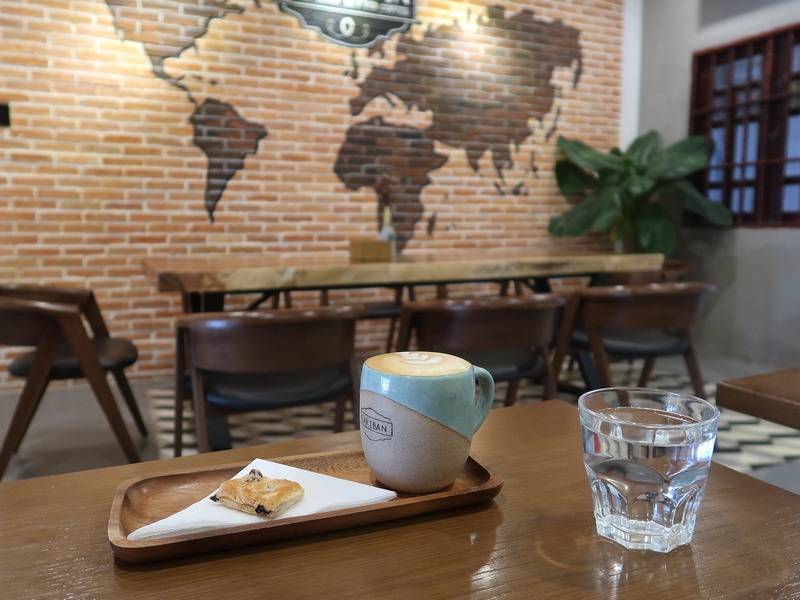 Real Coffee is also a good cafe to hang out in. 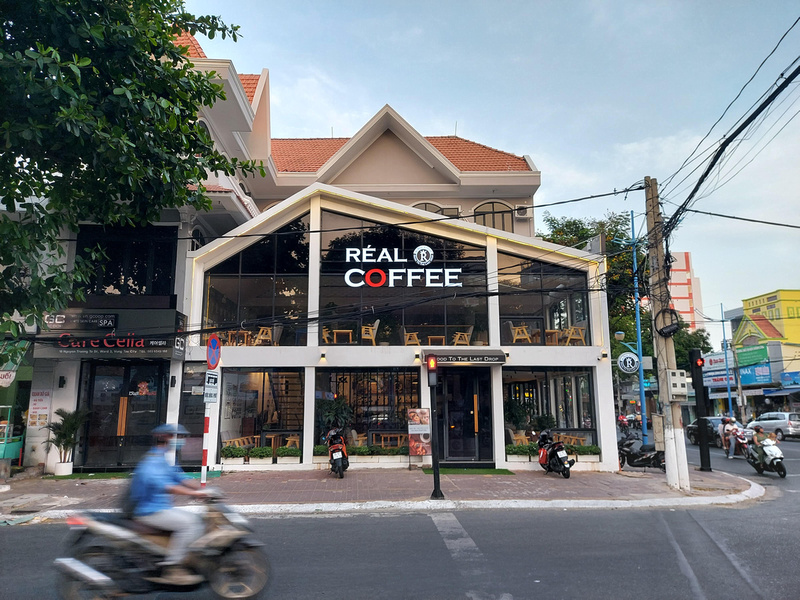 Some of the local chains have established a presence here. The Coffee House has a spacious and stylish branch in the city area. 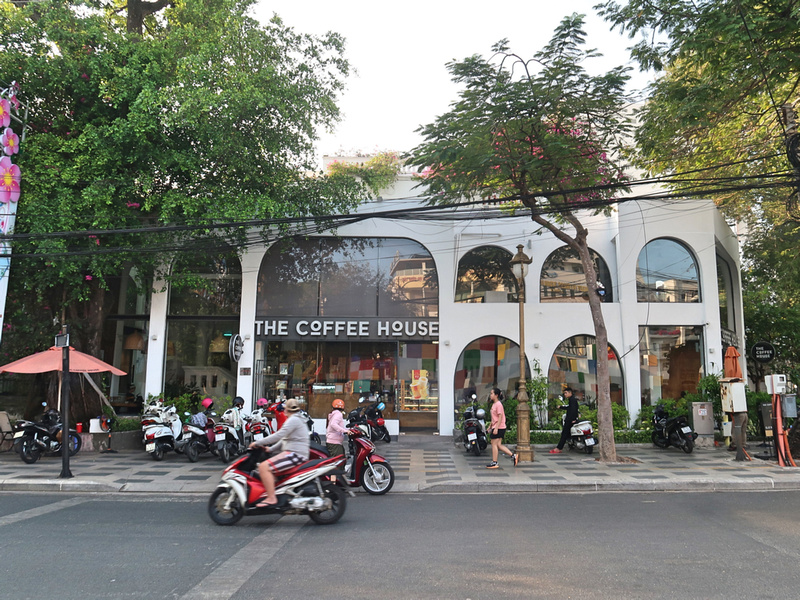 Highlands Coffee has a great location near Front Beach that overlooks the sea. 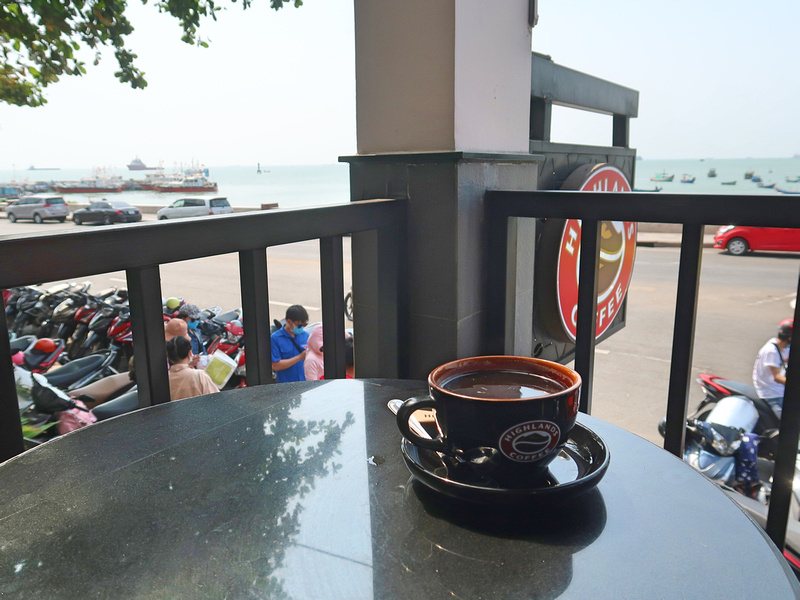 [Highlands Coffee with a sea view.]

Expat life and thoughts on retirement

Even during normal travel times (pre-pandemic), Vung Tau wasn’t a destination for international travellers. Most foreigners are either weekenders from Saigon like myself, or expats working in the oil and gas business.

There is also a small community of retired Australians here. Vung Tau is famous in Australia for being the port where Australian armed forces were based, like Danang was for US forces. Now, there are veterans that call Vung Tau home.

Whenever I go to these small beach cities I am confronted with thoughts of retirement. Not that I’m close to retirement, and not that I see myself as living here. It’s more of a necessary thought process of where I would like to end up in the future. I’ve had the same thought process about retirement in Da Nang and Chiang Mai, which are more likely candidates for me. In case you are wondering, I still don’t know. For all I know, I may end up living in a remote village in East Nusa Tenggara in Indonesia.

When I visit these retirement hotspots I look at men ahead of me in age, and I wonder what I will look like in the future. I like meeting up with the retired expats, because as expats it’s likely that they have had a working career that sent them all around the world.

There are some monthly rental apartments on Phan Chu Trinh St that cater to retirees, and I have thought about spending a month here for a change of scenery. There is an assortment of western restaurants, and you can always tell when there are Aussies residing somewhere when you see pub names like Ned Kelly Pub. (If you’re new to this blog, I don’t drink, so I have no advice on the bar scene.) 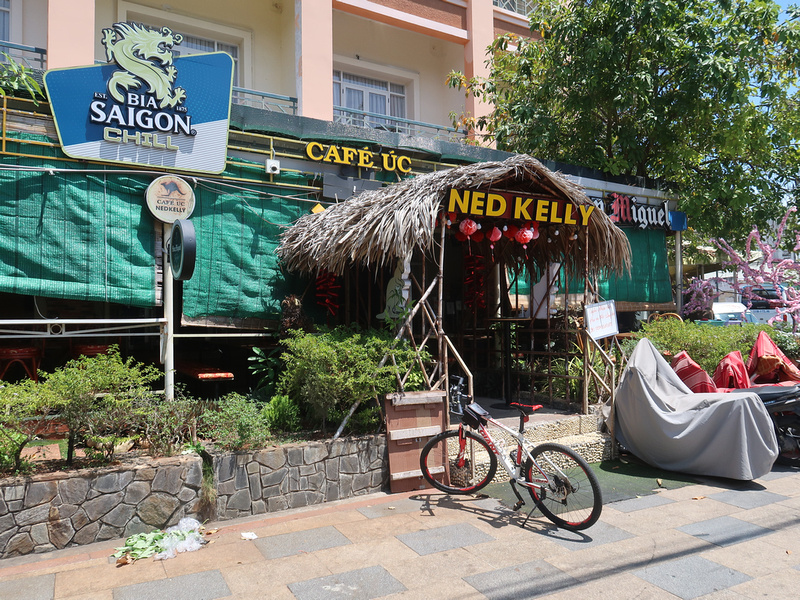 Vung Tau is sometimes compared to Pattaya (the Beach of Bangkok), both being beachside cities near a major metropolis. Vung Tau doesn’t have anywhere near the bar scene (and what goes with it), but there is a small bar scene on Nguyen Trai Street. 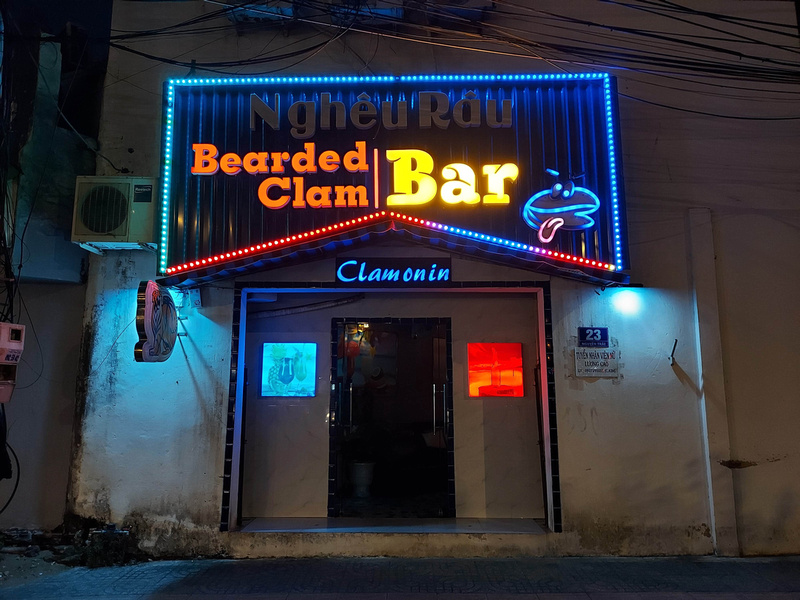 And here is some random trivia regarding expats behaving badly. Vung Tau had a moment of international disrepute in 2005 when Gary Glitter was arrested in Vung Tau on pedophile charges.

Visiting every provincial capital in Vietnam

If you’ve been following my blog while I’ve been holed up in Vietnam during the pandemic, you will know that I’ve been making a point of visiting the provincial capitals of Vietnam. Vung Tau is the biggest city and most popular destination in Ba Ria-Via Tau Province, but as the hyphenated provincial name might suggest, it is not the provincial capital. That would be Ba Ria, which is not really known for anything. 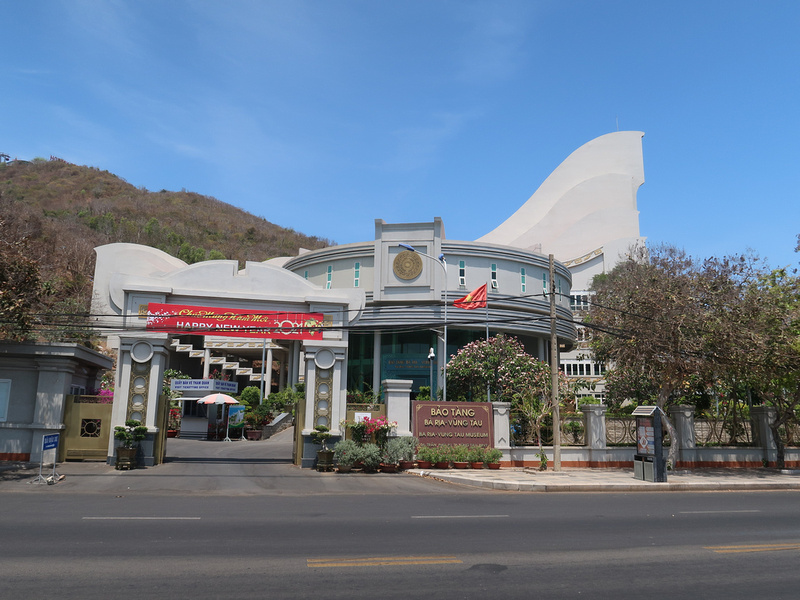 Now that I am committed to visiting provincial capitals, I guess I have to spend a night in Ba Ria at some point. I’m visiting some more coastal destinations in Ba Ria-Via Tau Province in the future, so I will incorporate that into another trip. 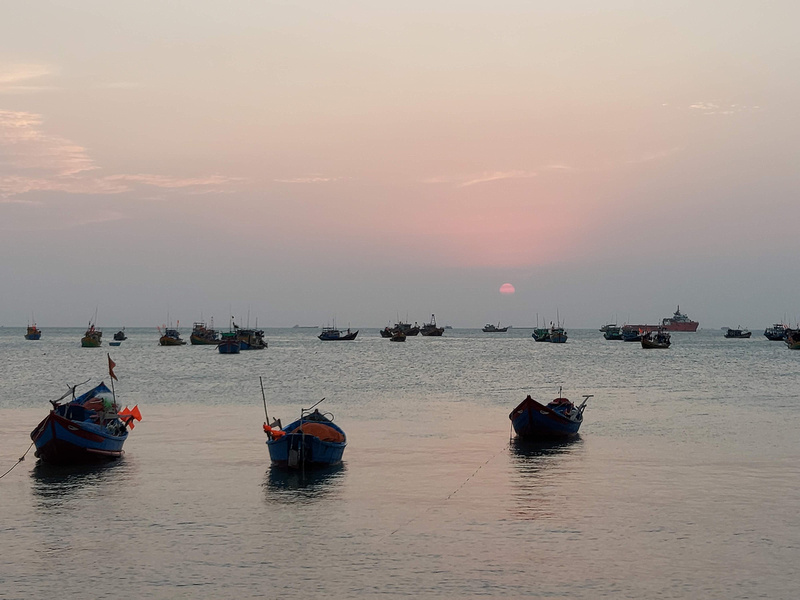