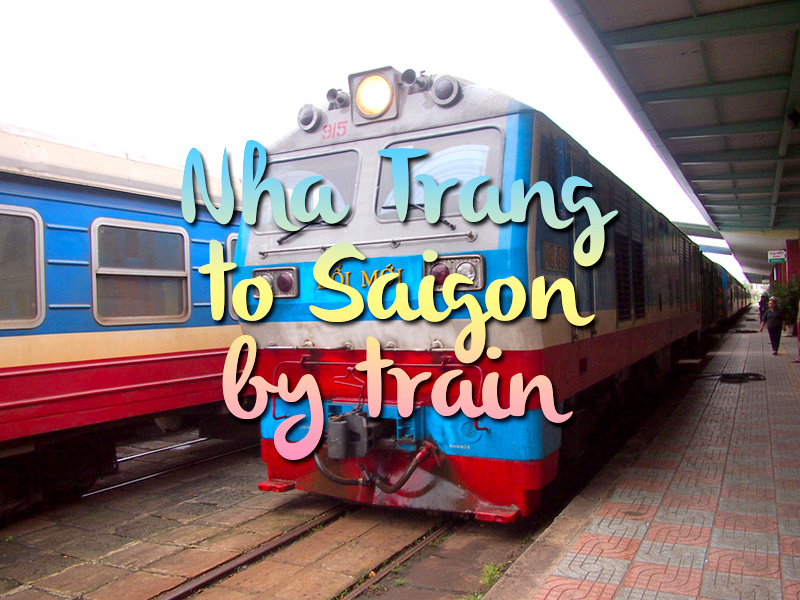 Vietnam by train is a great way to travel if you are making your way up or down the coast. While I wouldn’t traverse the whole length of the country in one go (especially when flights between Hanoi and Saigon are so competitive) it’s good for the stops in between.

Trains in Vietnam follow a single north-south route, with just a few spur lines on the way. Most of the trains are plying the Hanoi-Saigon route, which is the train that I caught from Nha Trang to Saigon.

I booked online in advance to save me going to the station, and to also get a good seat, or bed in this case.

If you like lying in bed all day reading books then this trip is for you. The beds in the sleeping cabins are fixed, so they are not converted into seats during the day (as they do in Thailand). I think the SE7 is the best train from Nha Trang to Saigon as it doesn’t depart or arrive at inconvenient hours.

The station at Nha Trang is centrally located and I walked there from my hotel in about 10 minutes. 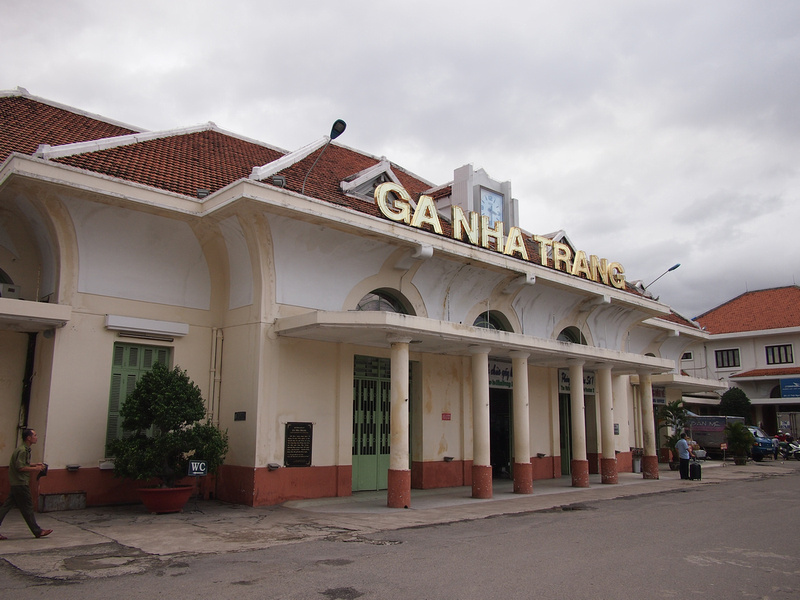 I was at the station 30 minutes early and to my surprise the train arrived five minutes before the scheduled departure. The SE7 begins its journey in Hanoi the day before, so there is plenty of opportunity for it to be delayed along the way. Trains in Vietnam are known to be late so this was a good start.

There is an information board at the platform which will tell you which end of the platform to wait for your carriage. 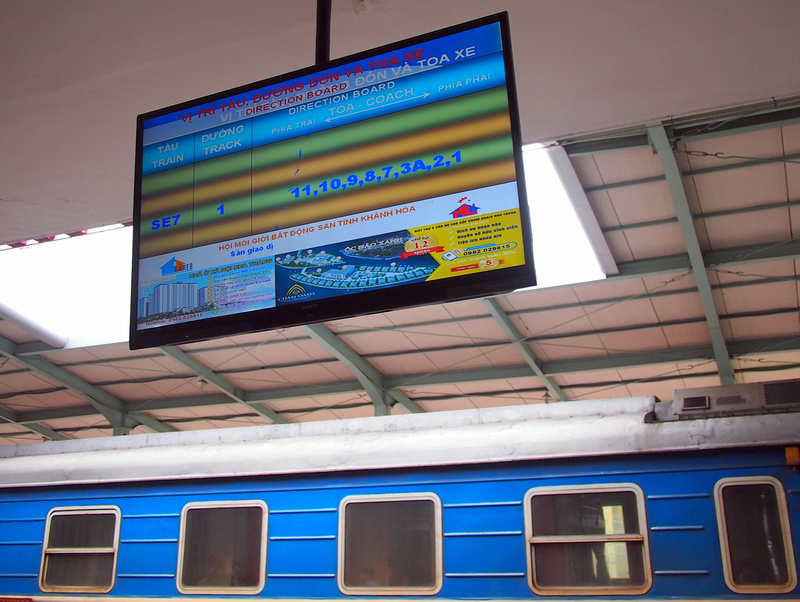 Todays engine is the Doi Moi, which is the name of the economic reforms of Vietnam which began in 1986. 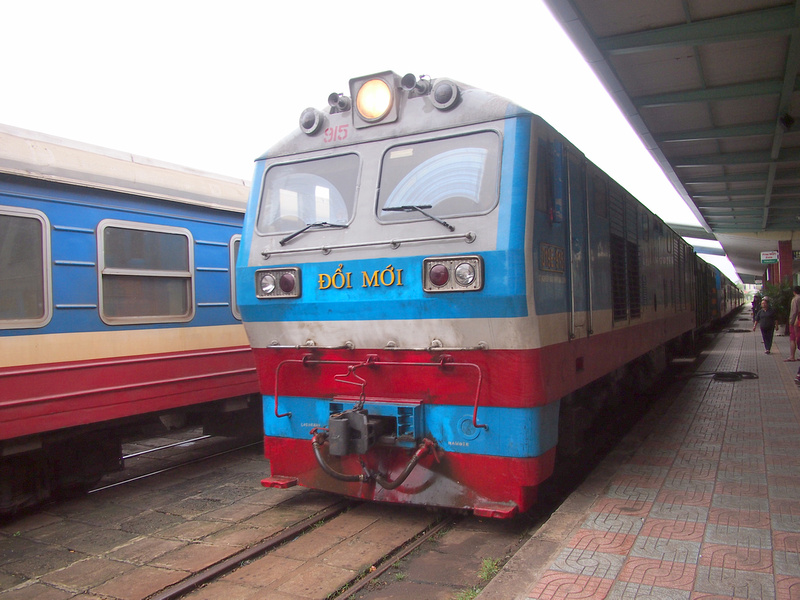 The track at Nha Trang does a loop through the city to save having to change engines at a dead-end track. This is the train track which I walked by while I was in Nha Trang. 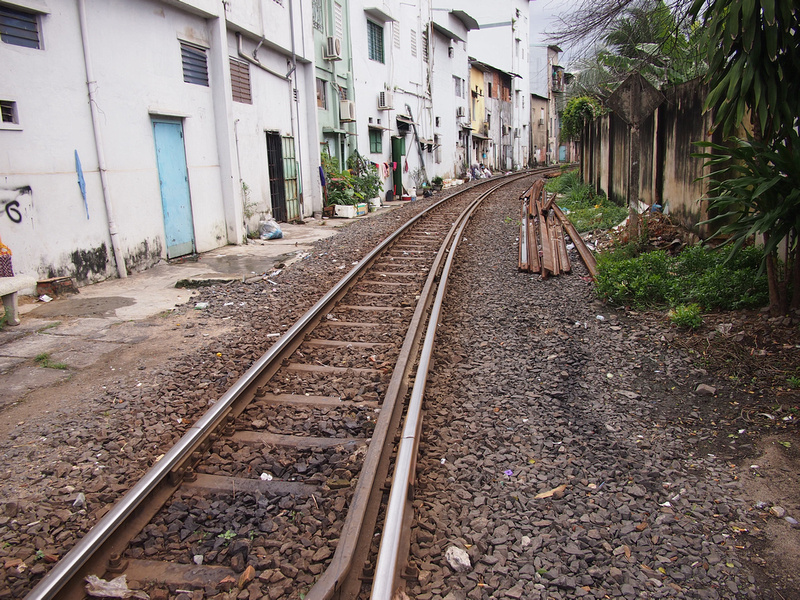 Here is what the four-bed berth (first class sleeper) looks like. 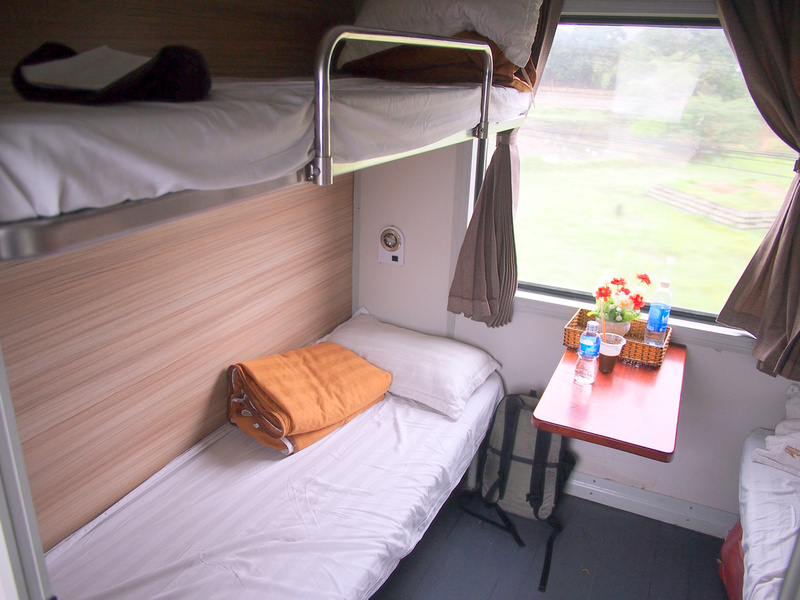 You are assigned a bed number, and the old sheets are removed before you get to your bed. After we left an attendant came through and gave me a fresh sheet, but unlike the trains in Thailand they don’t make your bed. 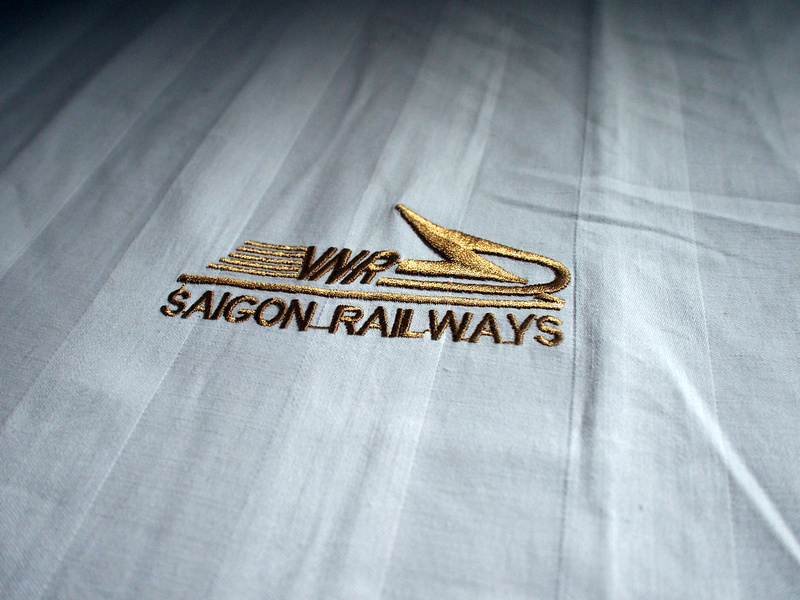 I got a lower bunk, but if you don’t mind the top bunk both beds are the same size (compared to Thailand where the top bunk is smaller). There are no curtains on these beds, though being in a compartment you can seal yourself off from noise and light during night travel.

There was no dining compartment on this train so there are drink carts throughout the day and a lunch trolley. 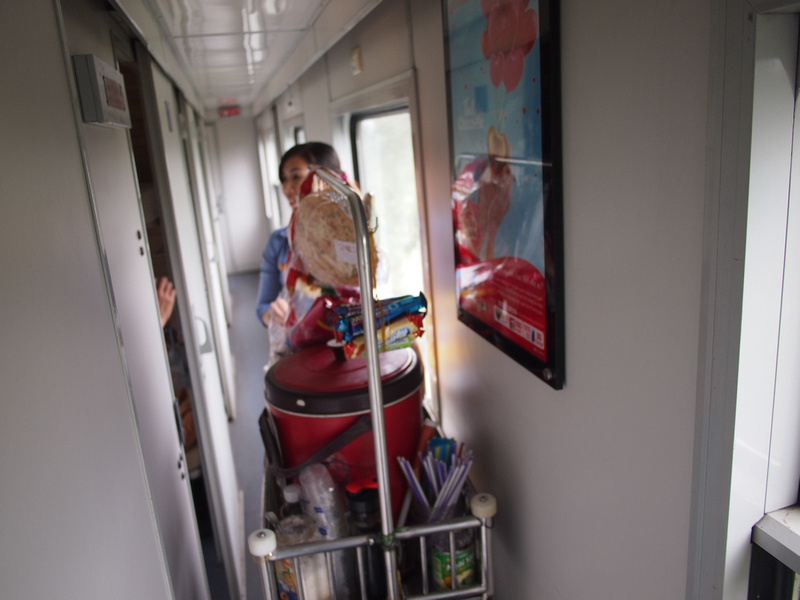 I wasn’t expecting a power outlet so it was a bonus to find one at the light switch. In this case it is advantageous to have the top bunk. There are only two outlets between four beds, so a power strip would be handy here. The compartment was air-conditioned, and it wasn’t set to freezing as they do on some trains in Asia. 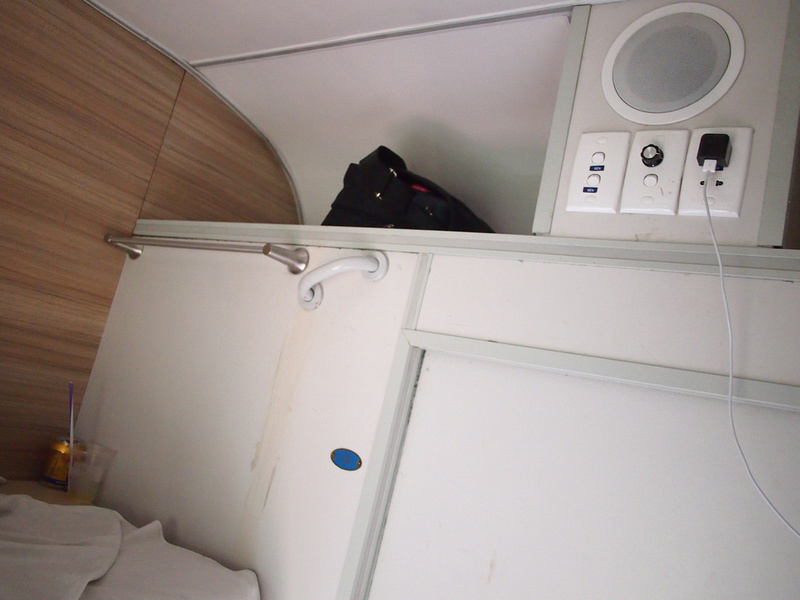 I went for a walk to see the other services on the train. There is a hot water unit for instant noodles and tea makers. 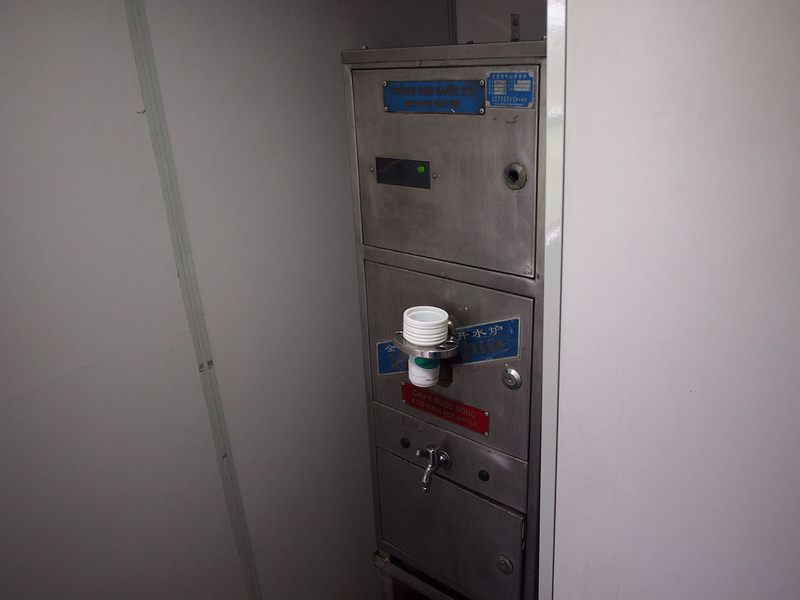 Other seats available include “Soft Seat” class, which offer individuals seats in 2×2 configuration. 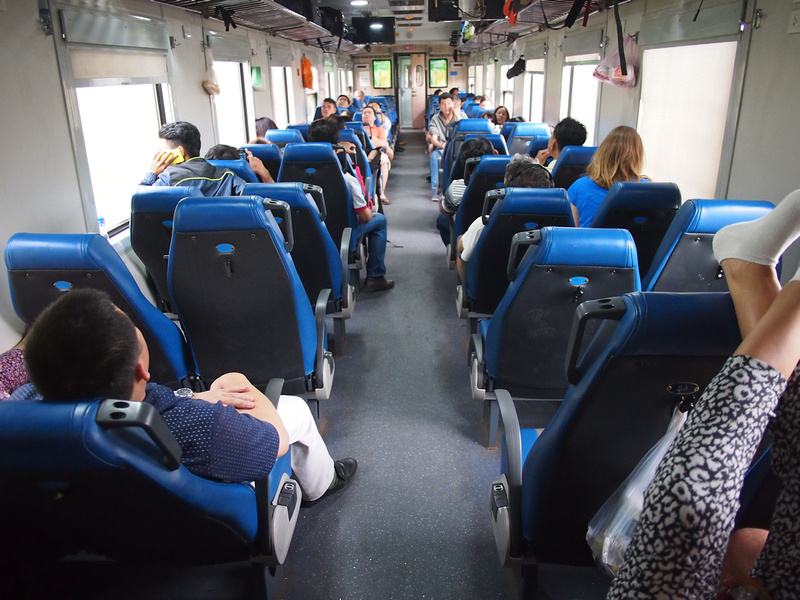 The cheap seats are in the “Hard Seat” class. They are not joking when they say they are hard seats. These wooden seats resemble park benches. With passenger numbers declining from increased competition by low cost airlines, perhaps it’s time to do away with these seats and install more more comfortable seats. 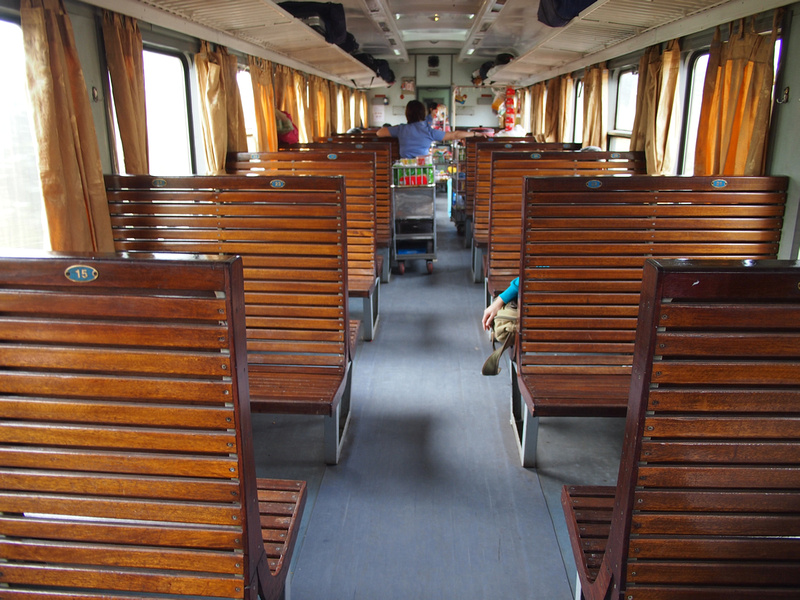 There are squat toilets and western toilets onboard, so you may have to go exploring to find your preferred style. 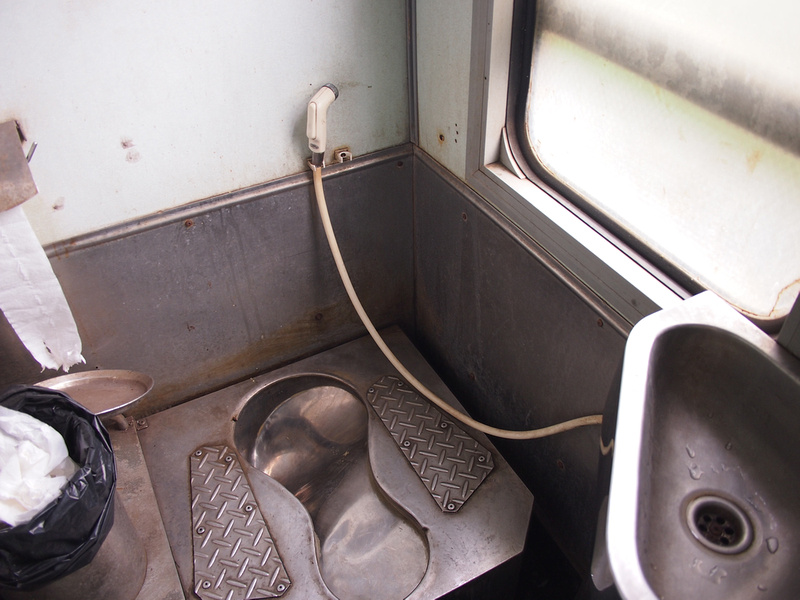 Note that all toilets have bum guns, though you should bring your own toilet paper in case there is none. 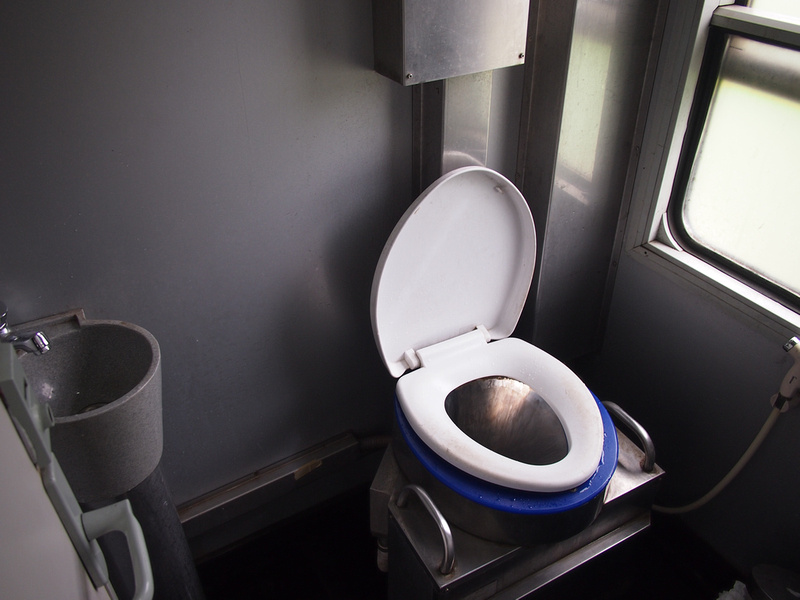 As most of the railway is on a single track the north and south trains share the same line. As a result the trains are timed to pass each other at designated passing loops. This is why so many trains in Vietnam travel at odd hours of the day. And if one train is late it will have a knock-on effect for the timetable in the rest of the country. 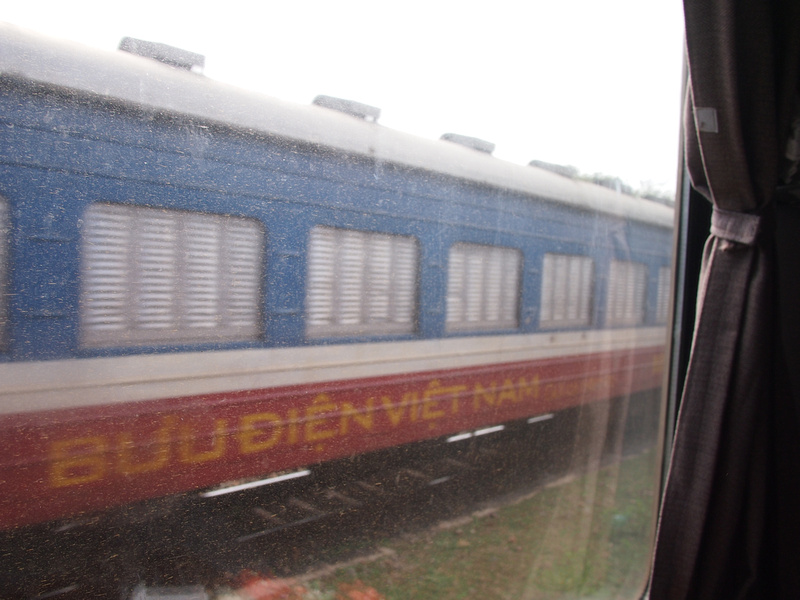 Travelling through southern Vietnam you will see miles of dragonfruit plantations. 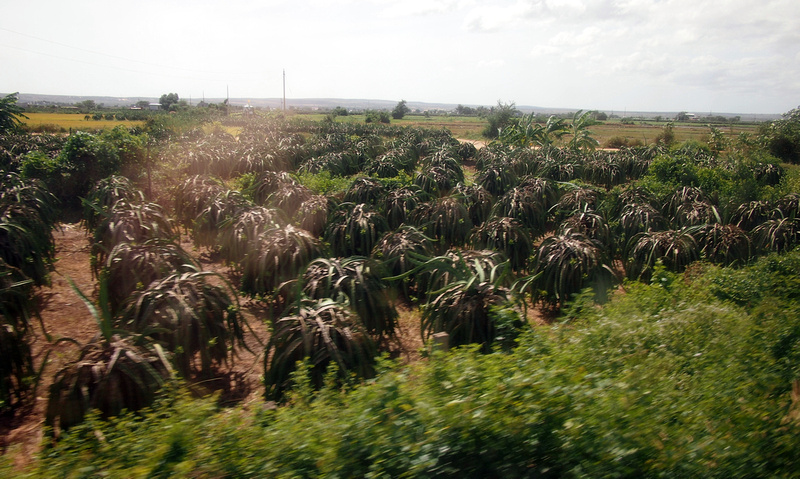 At one point the train was running parallel to a highway, where our train had the humiliation of being out-run by someone on a scooter. 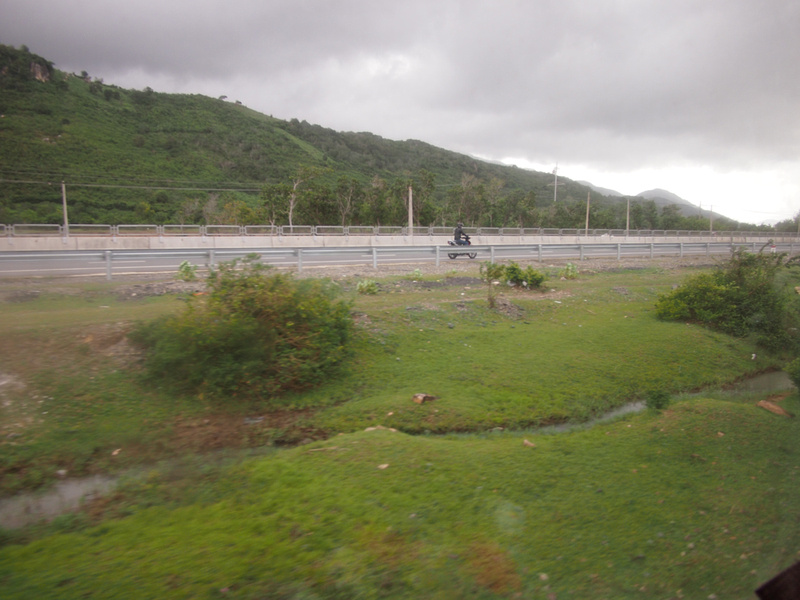 If this is your first time arriving in Saigon by train, then you should rouse yourself out of bed and view the spectacle of passing through the districts of Saigon. Despite being the largest city in Vietnam, there is only one track to serve north and south trains, and the buildings are built close to the line. 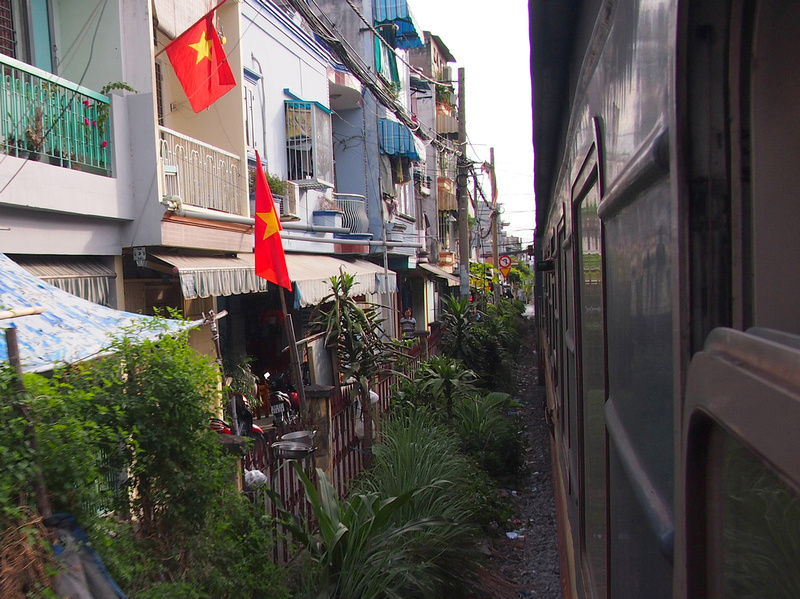 To my amazement, the train arrived at exactly 16.05, just like it said it would on the ticket. The train terminates at “Ga Sai Son” (Saigon Railway Station), which still keeps its old name even though the city become Ho Chi Minh City in 1976. The station is in District 3, not far from District 1 and central Saigon.

The total journey is about 411km, so the 7.5-hour journey averages about 55km an hour. There were talks of a high-speed train from Hanoi to Saigon which would travel at 350KM/H. Another plan has a high-speed train from Ho Chi Minh City–Nha Trang via the new Long Thanh International Airport project (which I have included in my future Southeast Asia map).

I don’t think they need a high-speed train, but a train that can travel at 160KM/H (like the current fastest train in Southeast Asia) would reduce the travel time down to under 3 hours.

Flights between Nha Trang and Saigon only take 40 minutes, but if you are not in a hurry then take the train and enjoy the designated stay-in-bed day.