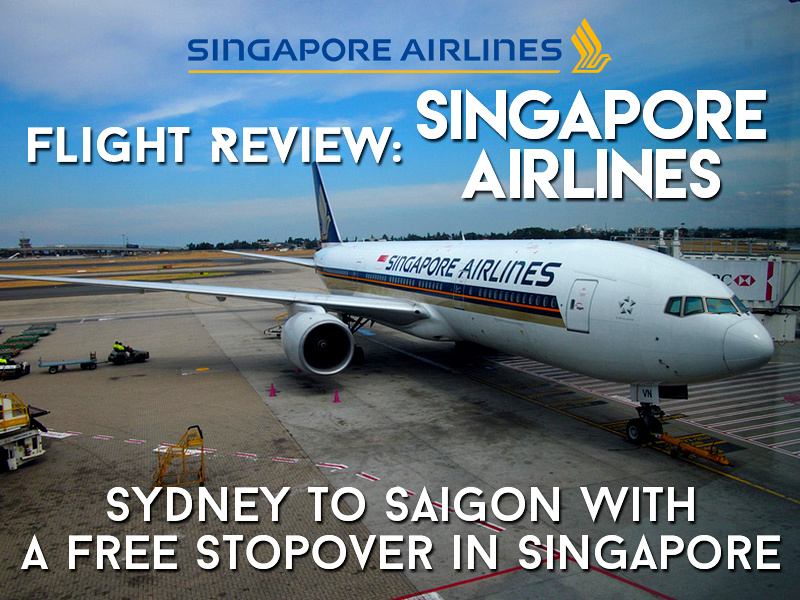 When booking flights that include a transfer of planes at an airport (a layover), it’s worth checking to see if you can turn it into a stopover (where you leave the airport for a short time). Some airlines with big hubs include a free stopover as part of a ticket, so it’s like getting to visit another city for free.

I was aware that Singapore Airlines offer this option, so I booked with them for my return flight from Saigon to Sydney. I took the option to stopover in Singapore on the way back.

When booking the flight you have to pick the multi-city option so you can build the stopover into your itinerary. The price was still the same as the offer I found on Skyscanner, though I noticed the price blows out if you try and stay more than two days. At that point it becomes a multi-city trip and not a return, which pushes the price up.

I checked in online for this flight, and I was able to select my seat for both legs of the journey. 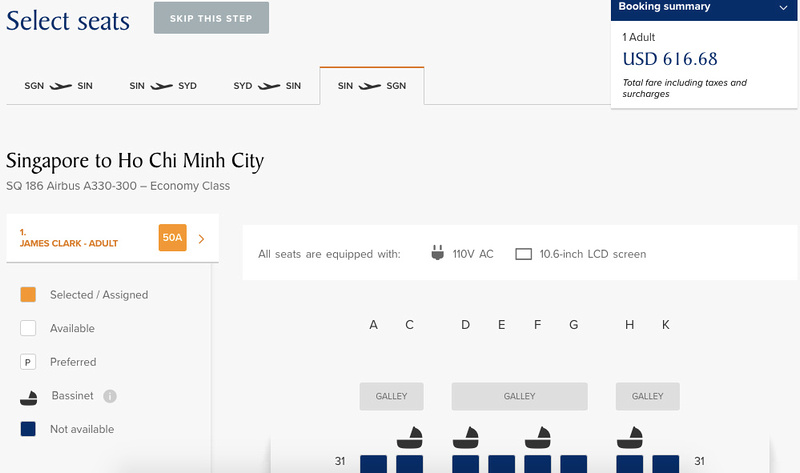 There are several flights a day from Sydney to Singapore so there is a permanent check-in area for Singapore Airlines. I arrived early so I could get some work done at the airport. I dropped my bag off (no queue) and went to departures. 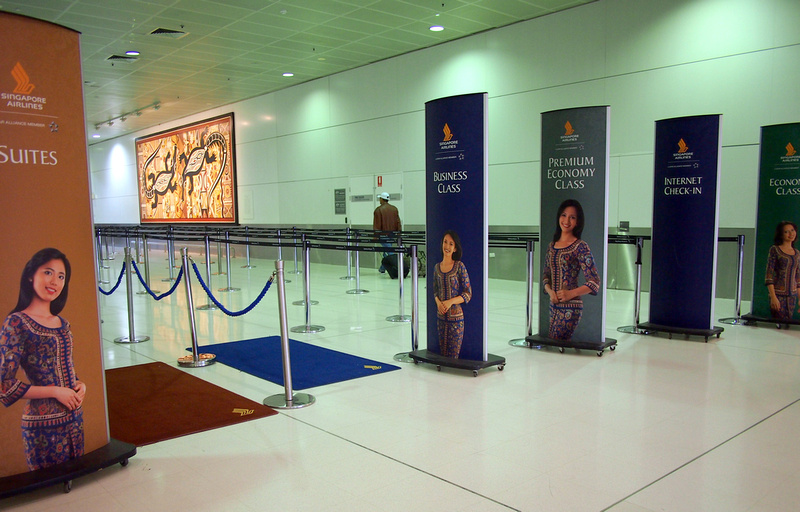 This flight was on a Boeing 777. My flight from Singapore to Sydney was on an A380. 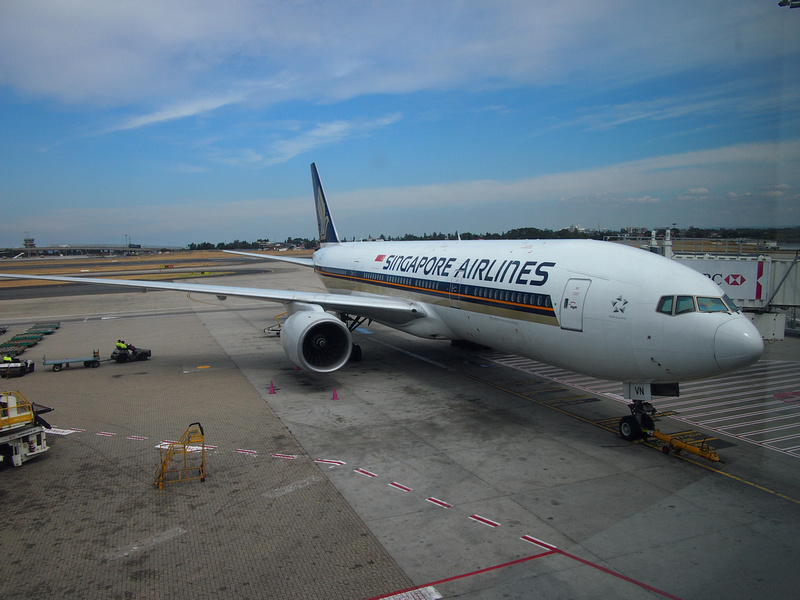 When you book you can see what aircraft type will be used if you prefer an A380. I picked this flight purely for the time of day (a daytime flight).

Free newspapers and earbuds should you require a set. 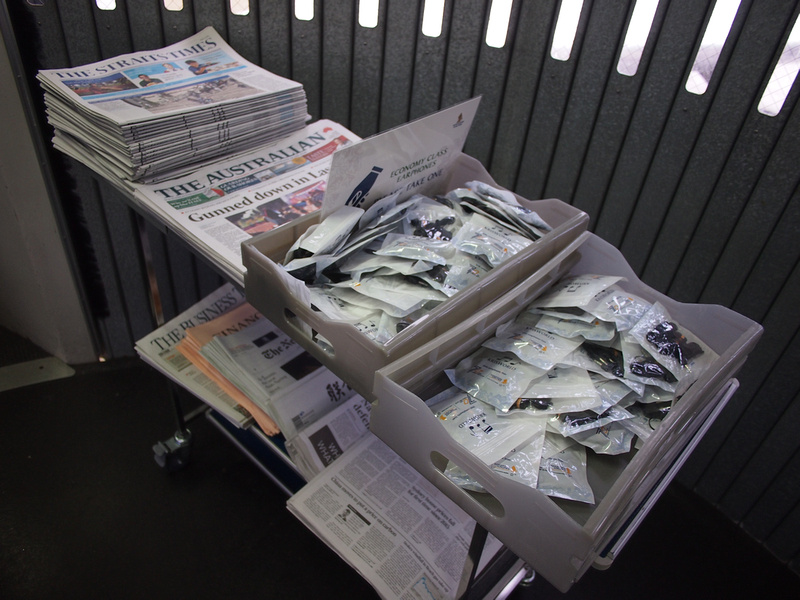 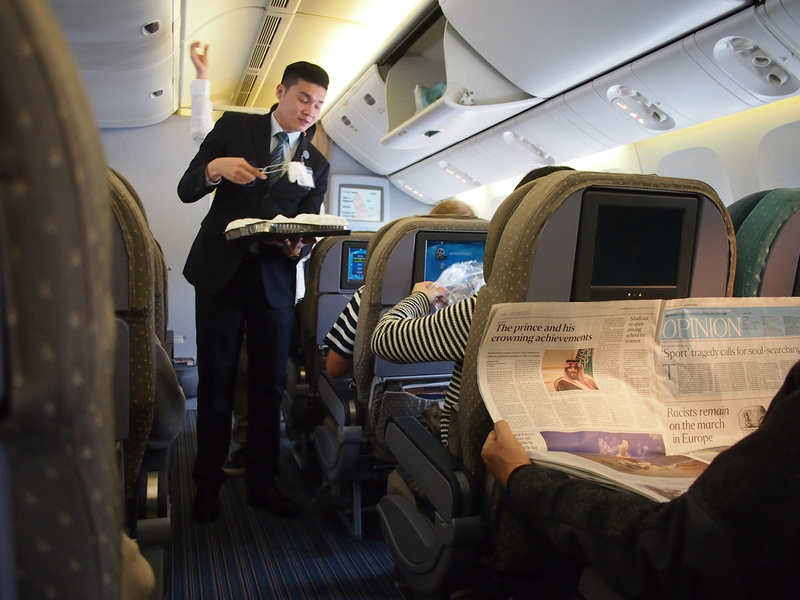 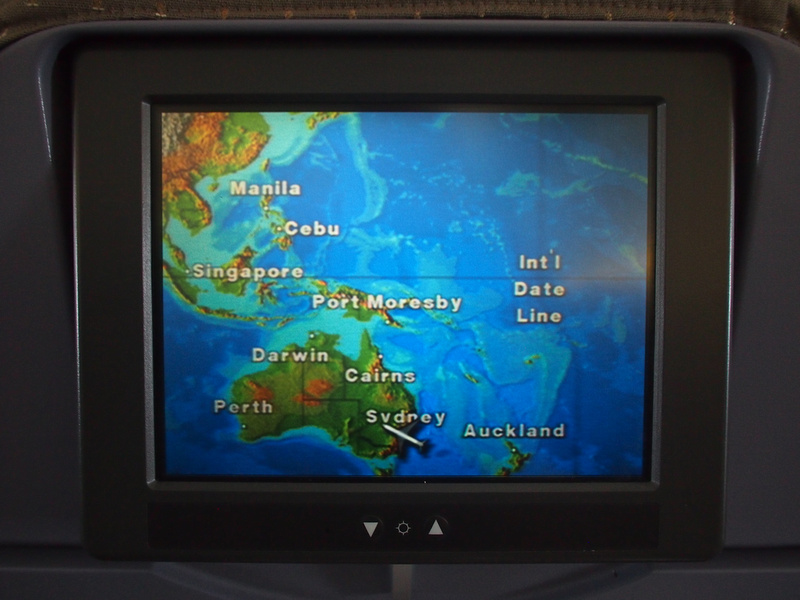 On my previous flight (SGN-SIN, SIN-SYD) I was comparing screen sizes as the old 777 on my first flight had a screen barely bigger than my Samsung Galaxy 8. This was a newer 777 and the screen was bigger (though not as big as the A380 screen). 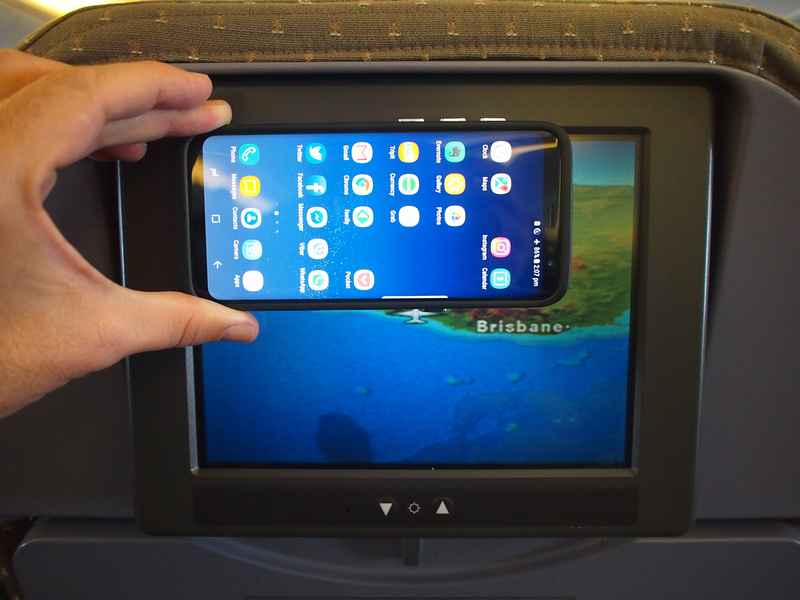 The October, 2017 edition of Silverkris. 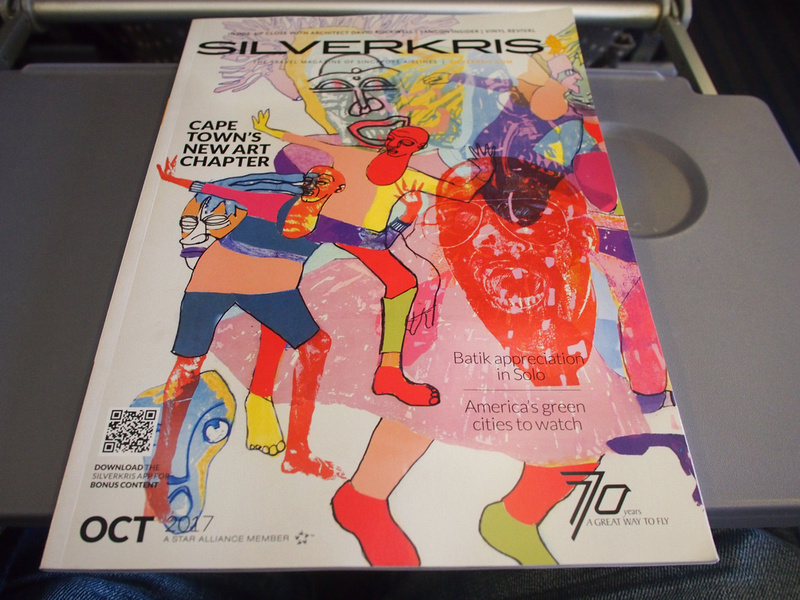 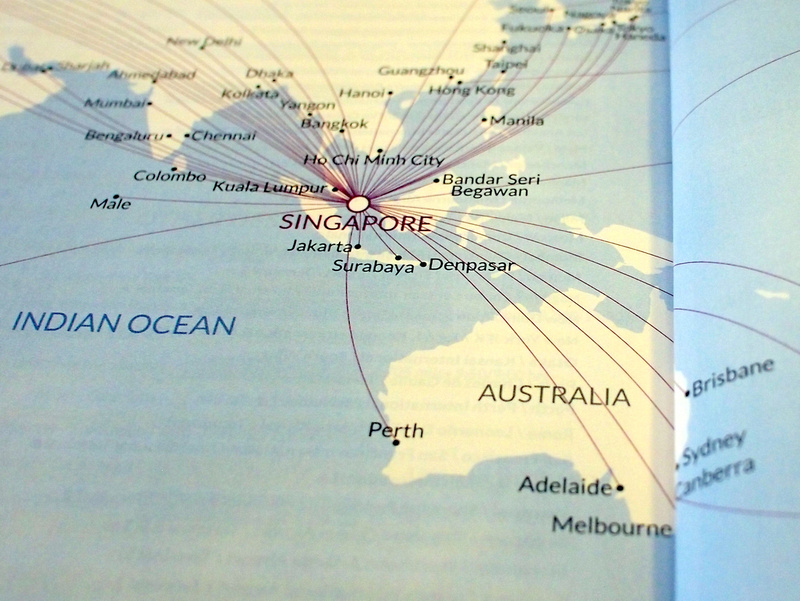 A menu is provided showing meal options for the flight. 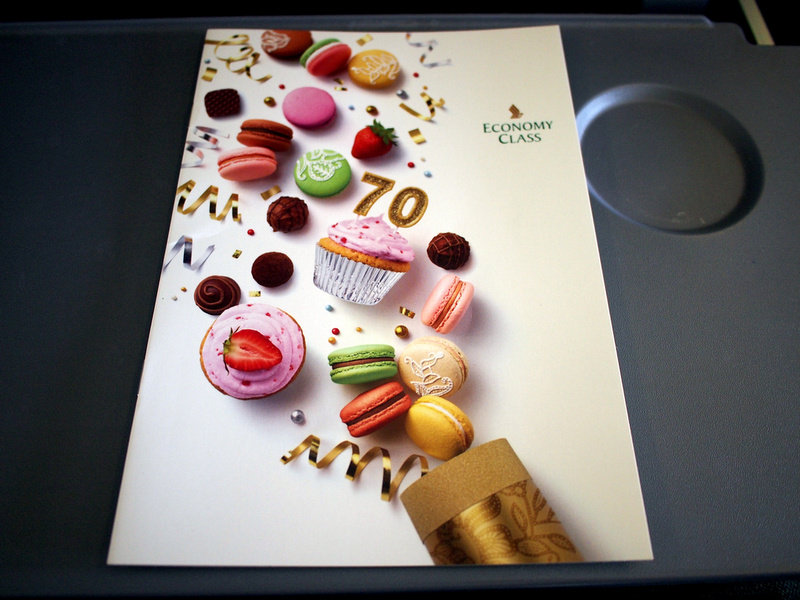 And peanuts and a drink while you wait. 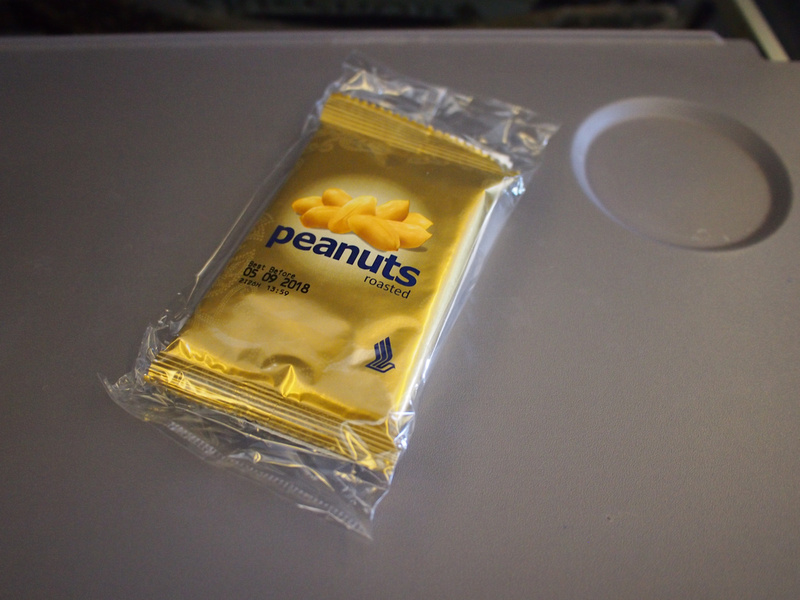 I got the chicken and rice lunch which was the usual good fare from Singapore Airlines. 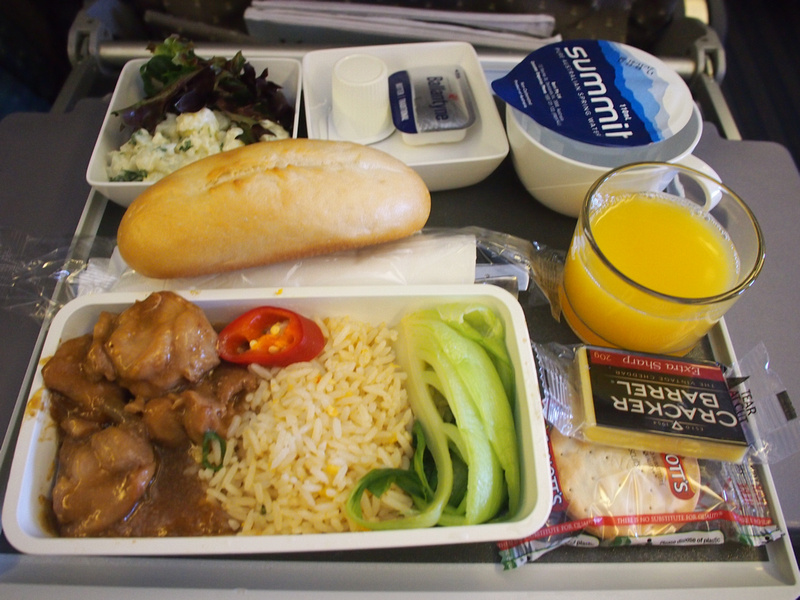 And an ice cream is also served. 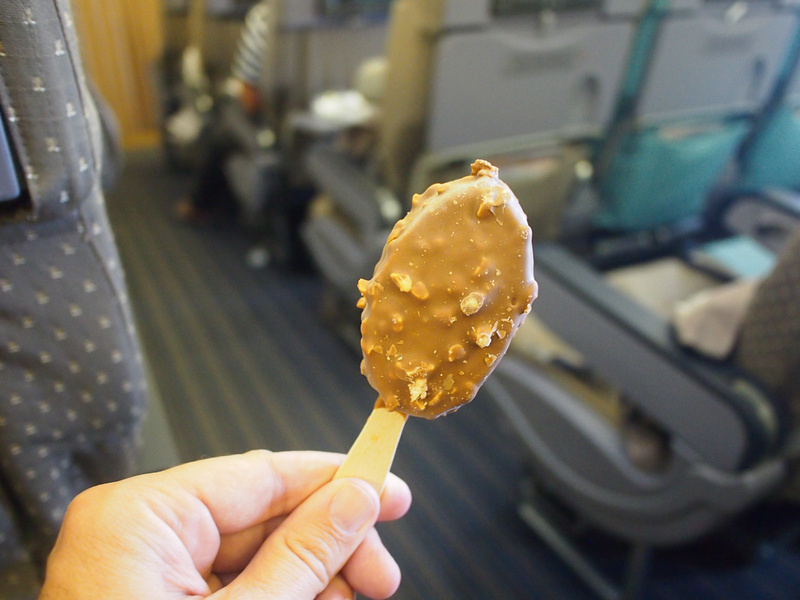 With about 7.5 hours of flying time I got two movies in between meal breaks. 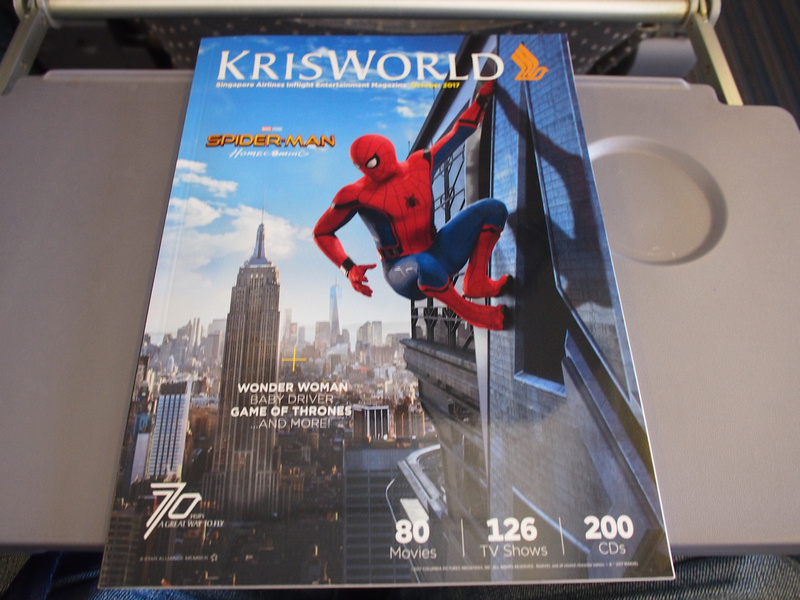 The flight isn’t long enough for two full meals, so before landing a refreshment meal is served. I got the egg noodles option. 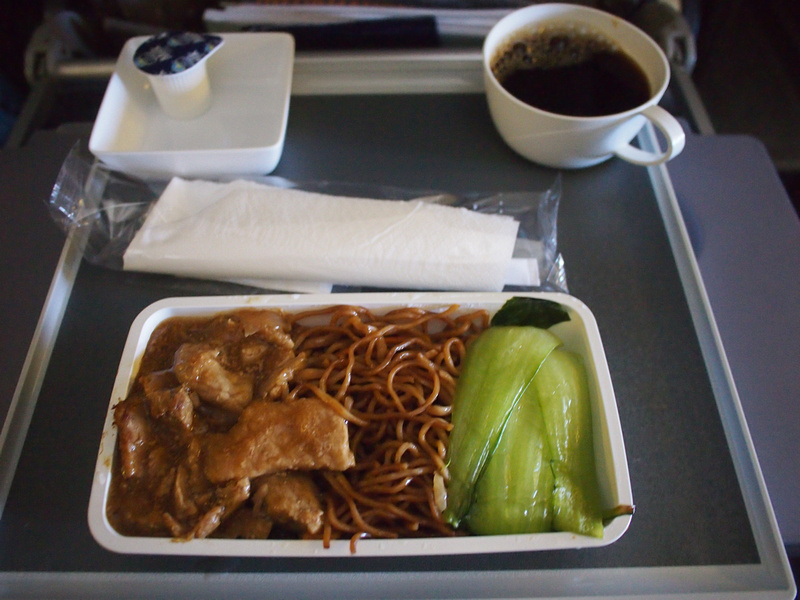 When you book a stopover you pick up your checked bag at the airport and go through customs.

Even if you are not stopping over, Changi airport is a great airport to do a layover. I recommend a stopover though as Singapore is a cool place for a quick break.

After you have had your stopover in Singapore it is time to check in again at the airport. I tried to use the self check-in, but the machine couldn’t read my Vietnam visa stamp in my passport so I had to go old-school and visit the counter. 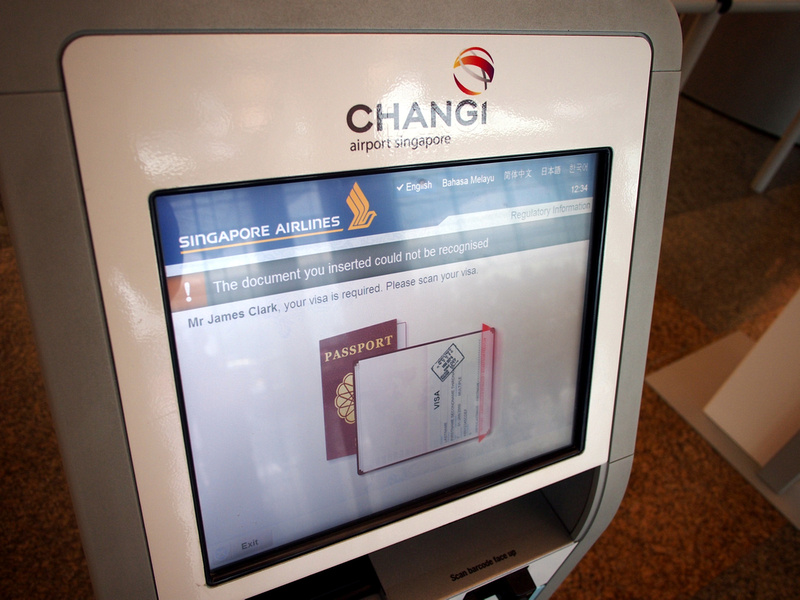 Changi Airport is one of the few airports in the world where I will actually look forward to eating at. Prices are reasonable (for an airport) and the food is better quality the the average US mall. I made time here to have one last laksa before leaving Singapore. 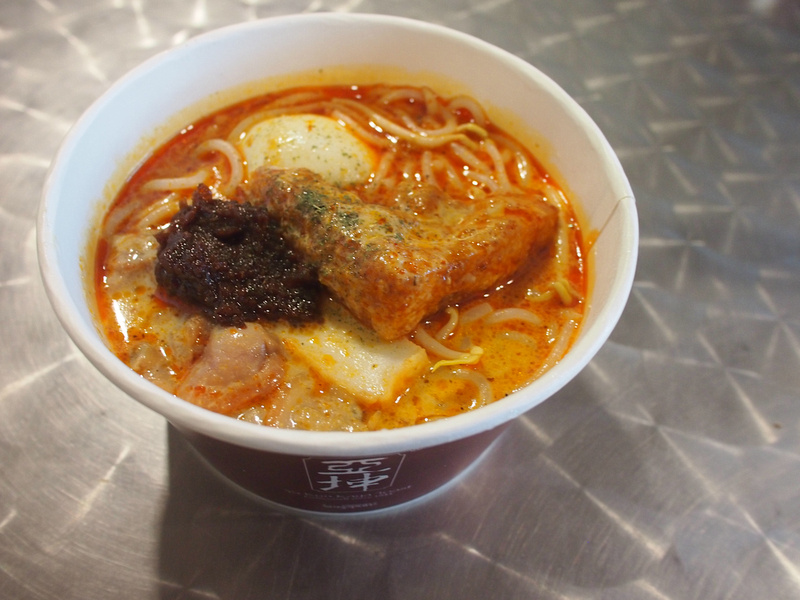 Todays flight was on an Airbus A330, and it turns out that this was the second time in a month that I travelled on SQ 186. 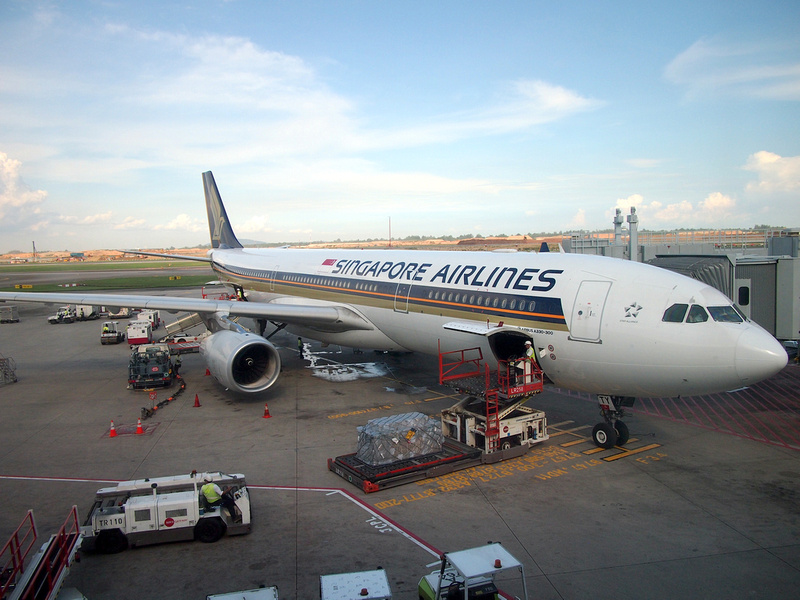 Todays newspapers in case you didn’t bring anything to read. 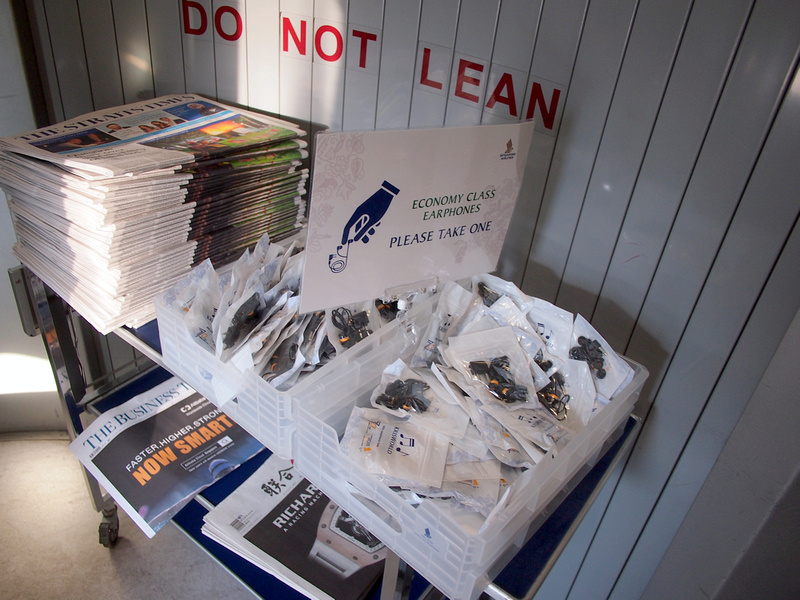 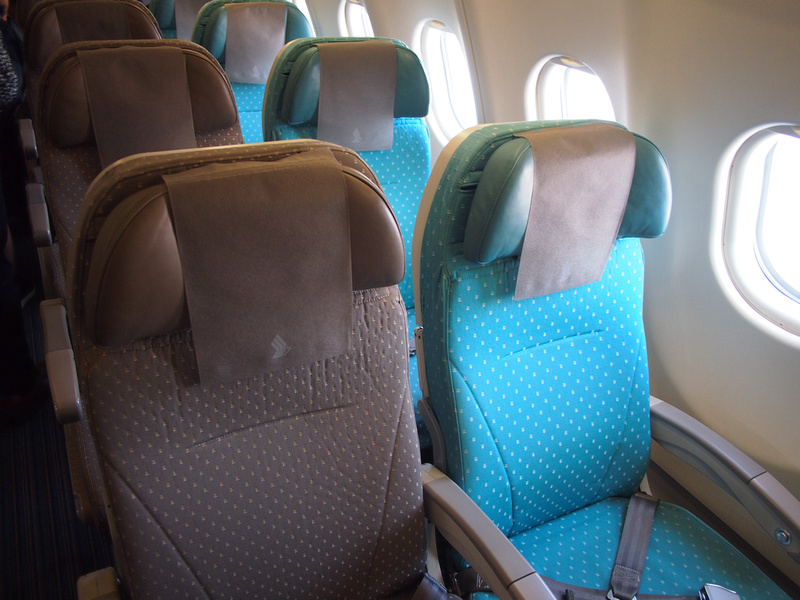 The scheduled flight time is Duration: 2H, 10M, departing at 17.25 from Singapore and arrive in Saigon at 18.35. The actual flying time is around 90 minutes, depending on the route taken that day. 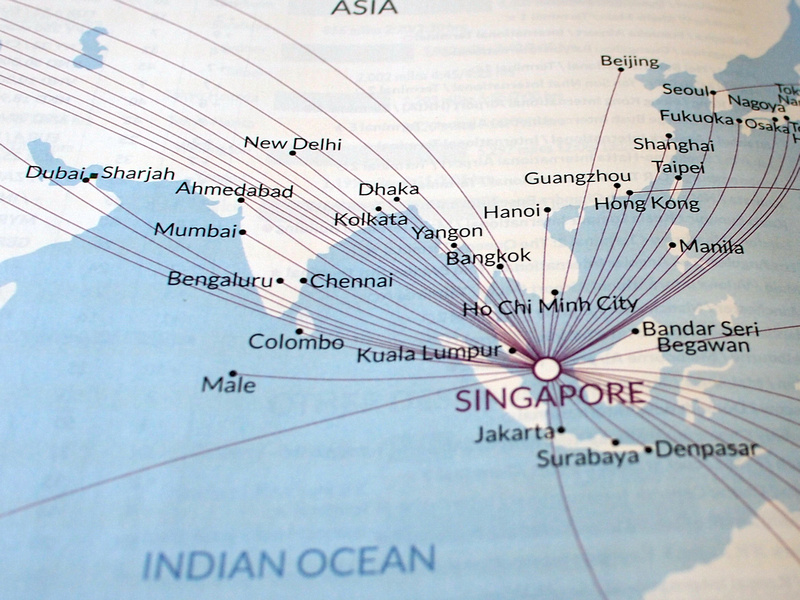 There is the option to watch movies on this flight, but at 90 minutes of flying there is not enough time to watch a movie. 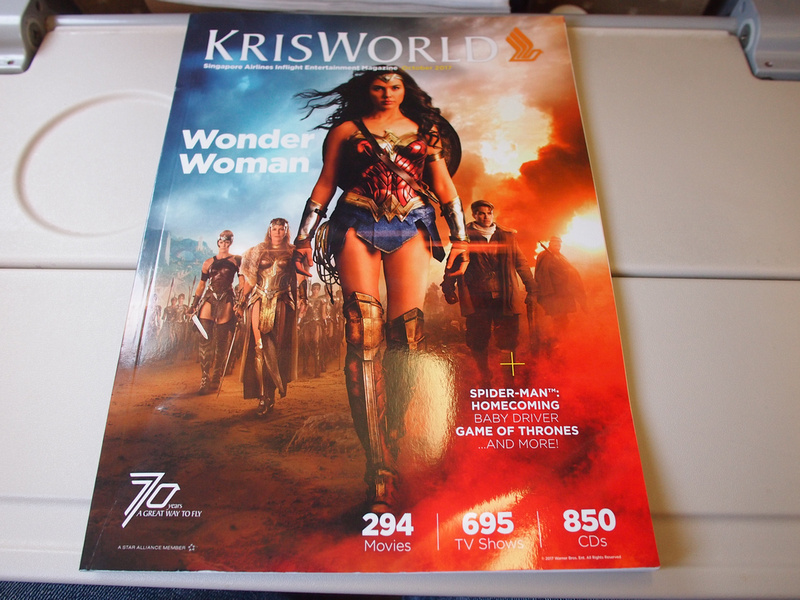 Dinner is served on this flight, and I got the pork and rice option. An ice cream is also included. 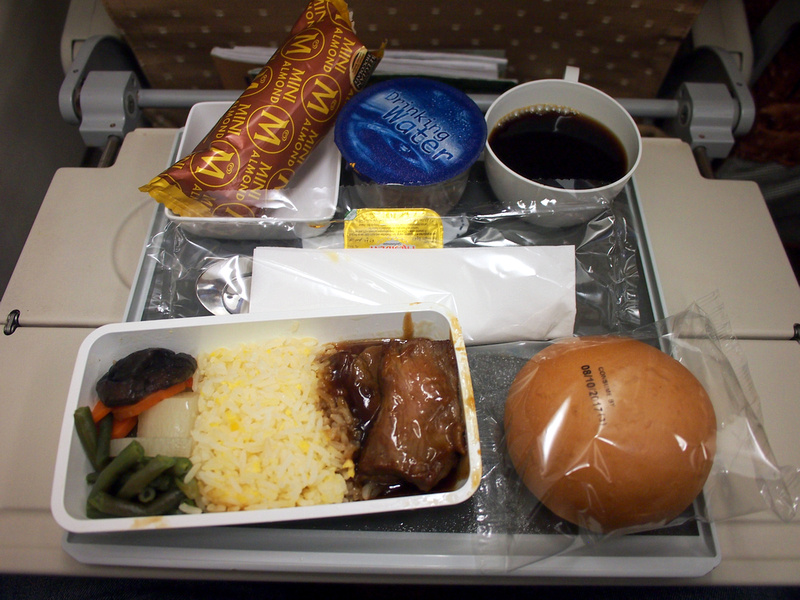 I always get a window seat for short flights, and todays sunset over the Mekong Delta did not disappoint. 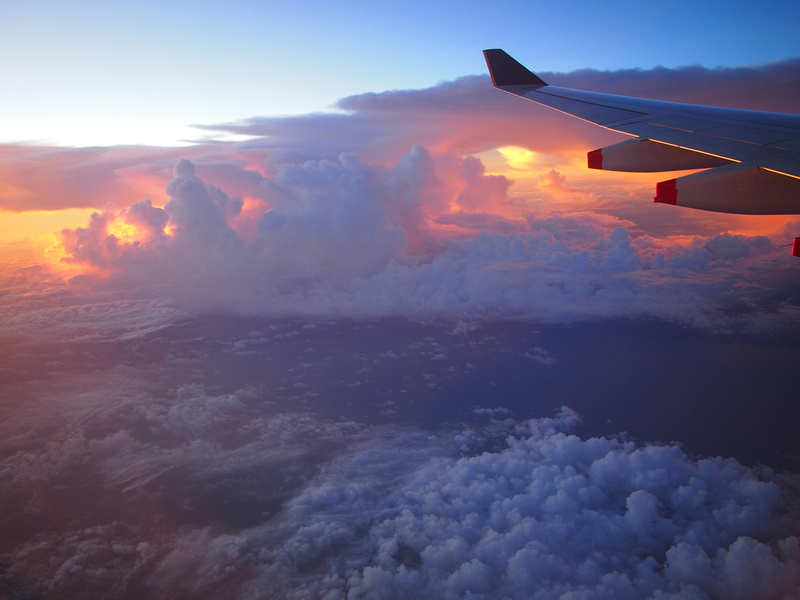 The flight arrived on time at Tan Son Nhat International Airport (SGN). Overall another good flight with Singapore Airlines, which are one of my preferred airlines in Southeast Asia.

After the flight I noticed that I didn’t get any points on my United account (a Star Alliance partner) when I usually do. It turns out that the ticket was so cheap that the ticket class I was on didn’t qualify. I might of got points if I had a KrisFlyer account (the Singapore Airlines frequent flyer program) so I think I will switch to them now seeing I am rarely in the USA these days.