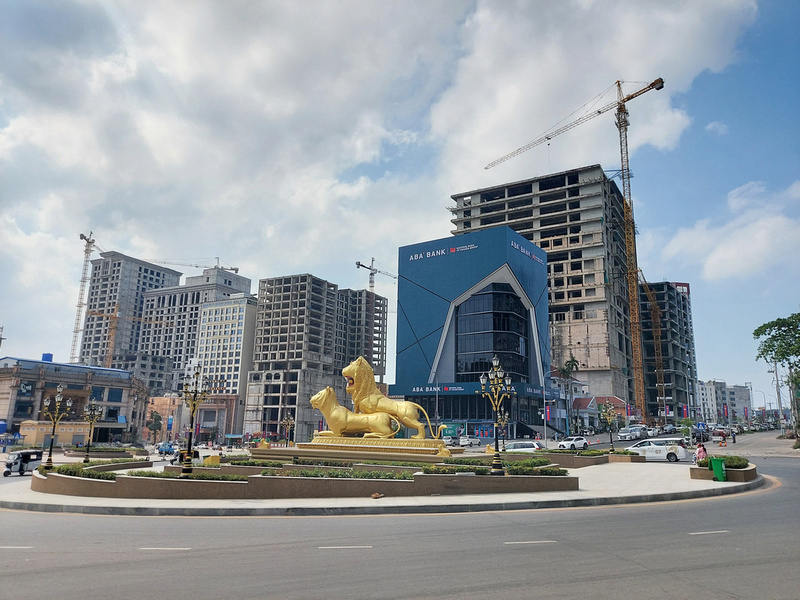 Sihanoukville is a beach/port city on the coast of Cambodia. From an international tourism perspective, it was known as a backpacker haven and for retired expats drinking in girlie bars. In the space of about five years, Sihanoukville was transformed almost entirely into a Chinese casino resort destination. 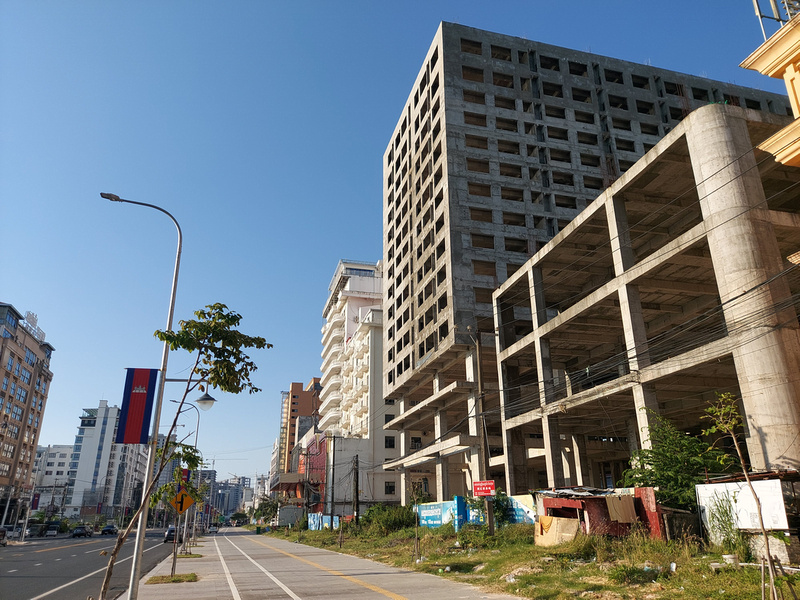 I was last in Sihanoukville in January 2018, partly because I had heard that Otres Beach (a popular beach for backpackers) was going to be cleared for development. After spending New Year’s Eve on Otres I went to Serendipity Beach on New Year’s Day. I arrived just as they started clearing away the beach bars.

The demolition of the Serendipity beach bars signalled the start of a supercharged development burst that would regularly put Sihanoukville in the news. I’ve been keeping track of major projects and news updates at Future Southeast Asia, so I wanted to go back to see for myself what has been happening. I returned to Sihanoukville four years later in January 2022, and these are my notes and observations from that trip. 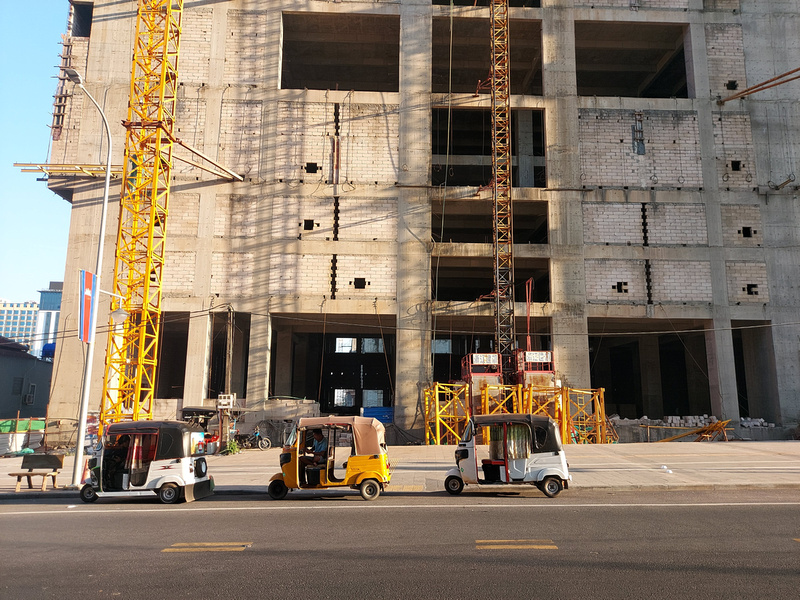 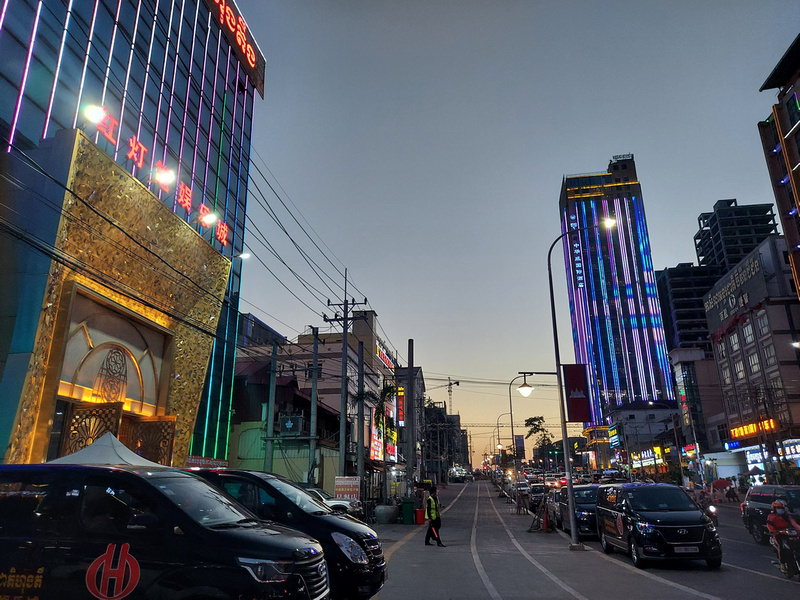 When I visited Sihanoukville in 2018, a taxi driver told me there were 55 casinos in Sihanoukville. I couldn’t verify that number, but after walking around for a while it seemed like a conservative number. I remarked that Sihanoukville is the New Macau of Southeast Asia.

The number of casinos grew since my last visit, and there were 135 casinos according to one site that has mapped them all. 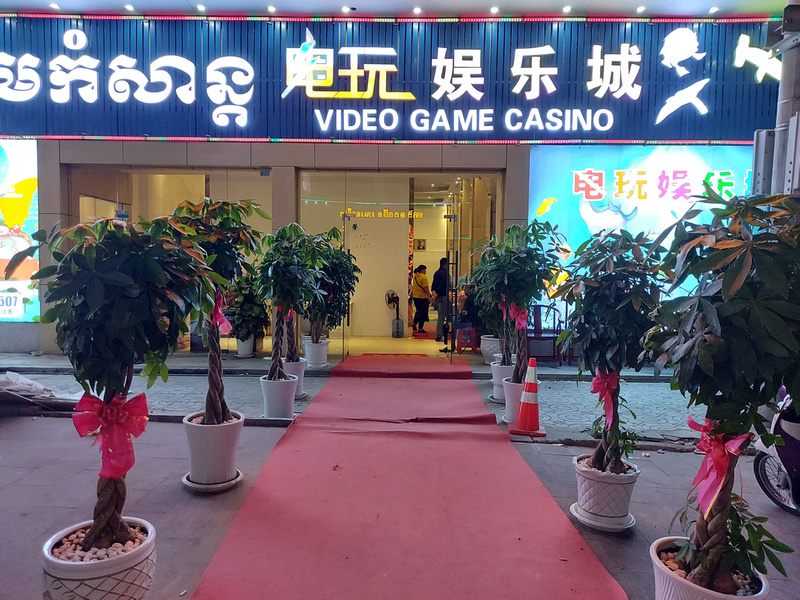 The boom times for casinos in Sihanoukville ended in the space of one month. Online gaming operations were banned on January 1 2020, and on January 23 the first coronavirus case in Cambodia arrived in Sihanoukville via a traveller from Wuhan. I was there nearly two years to the day since that first case, and there were still no domestic flights operating from Sihanoukville, let alone any international flights. 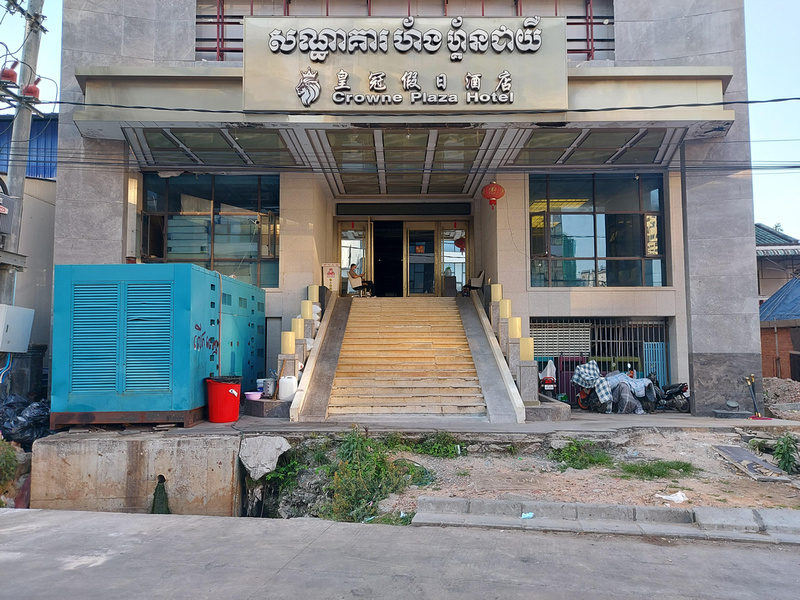 It was hard to tell how many casinos were still open, temporarily shut, still under construction, or closed for good.

I saw this advertisement for staff, which was advertising jobs as a dealer for $375 – $420 USD per month. The minimum wage in Cambodia is $194 USD per month. 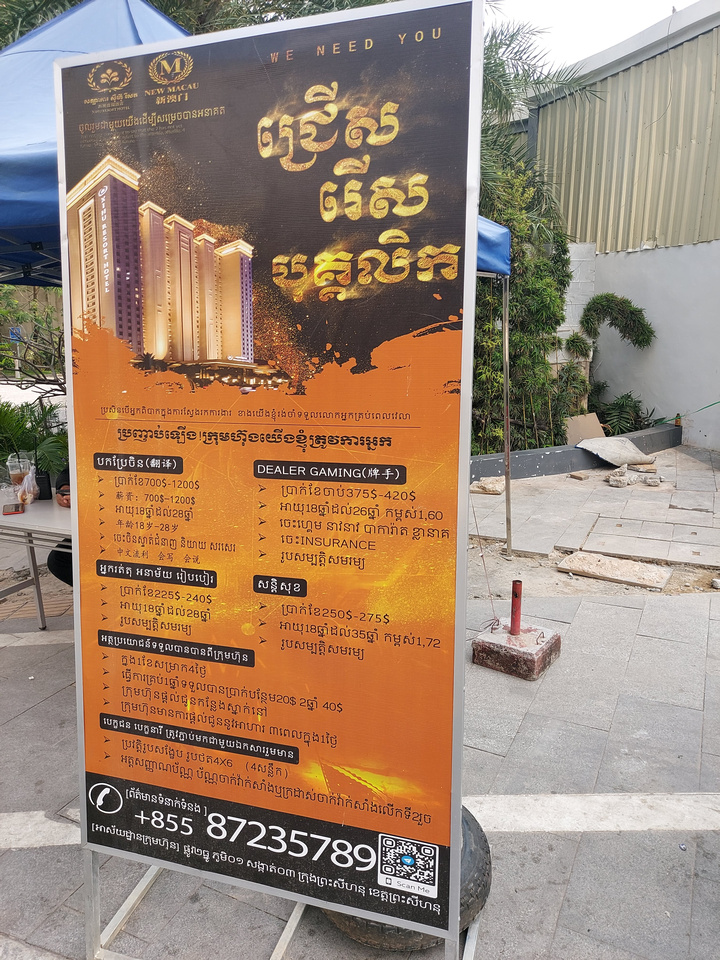 Meanwhile, casino advertisements like this have me wondering what time we eat the rich. 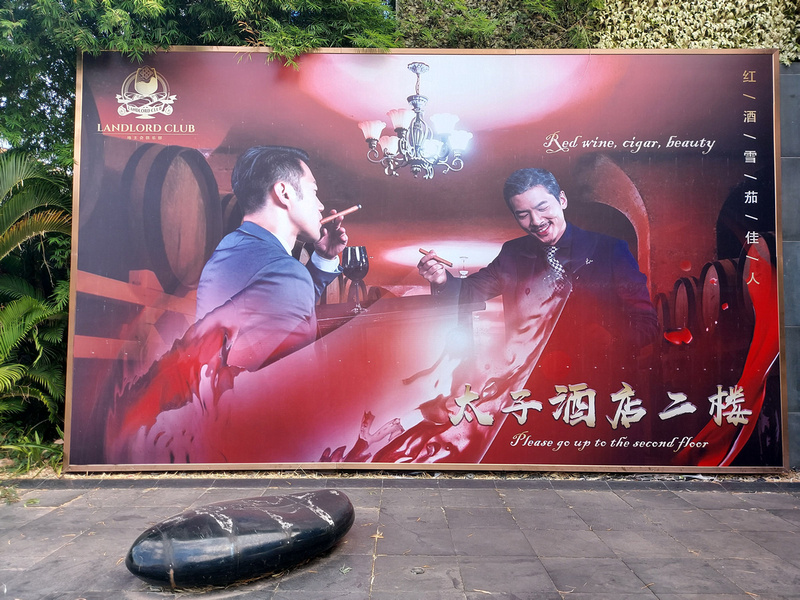 I didn’t go inside any casinos on this trip. I went inside a casino once on my last trip and I felt unwelcome, and it is hard to feel anonymous in these little casinos. At least in Macau, the casinos are so enormous that I don’t mind wandering around having a look. I feel more anonymous there (even if there are like 50 security cameras looking at me at any one time).

Hotel and apartment boom and bust

In addition to all the casinos are the abandoned hotel and apartment projects around the city. 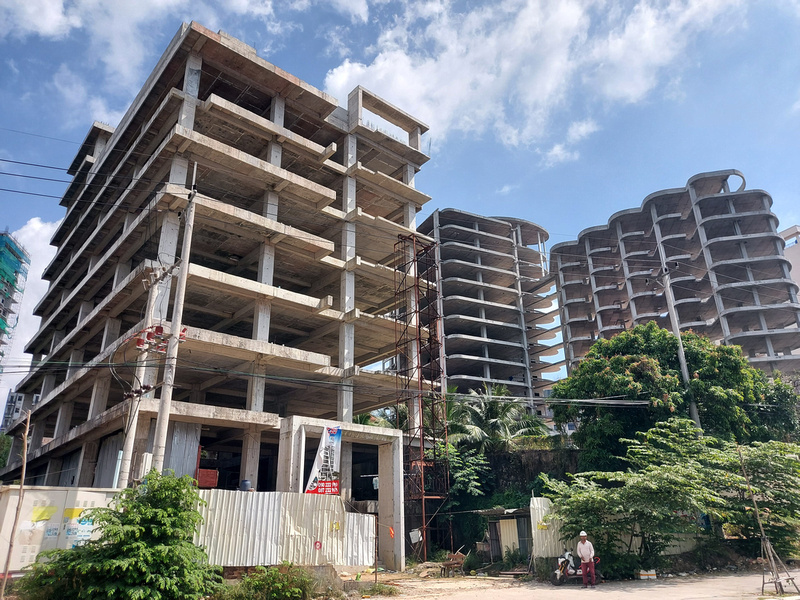 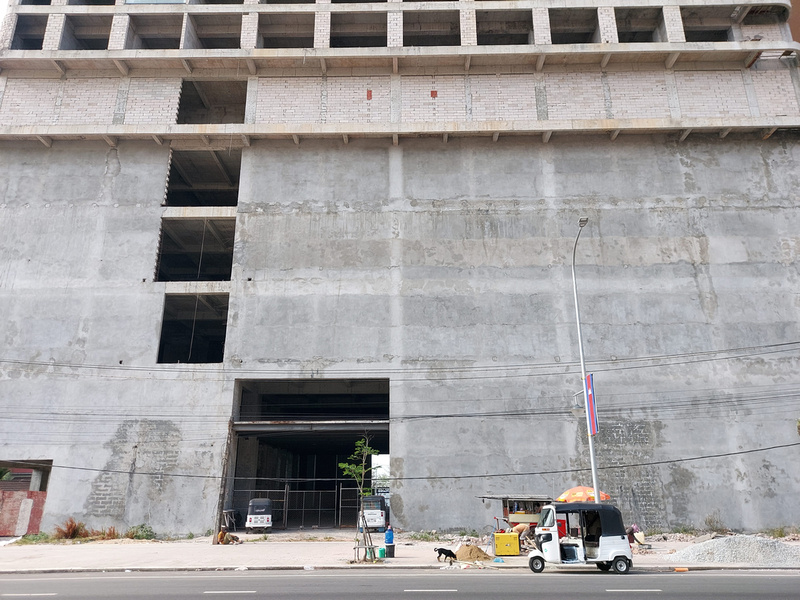 There was a gold rush mentality here where urban planning was not keeping up with development. 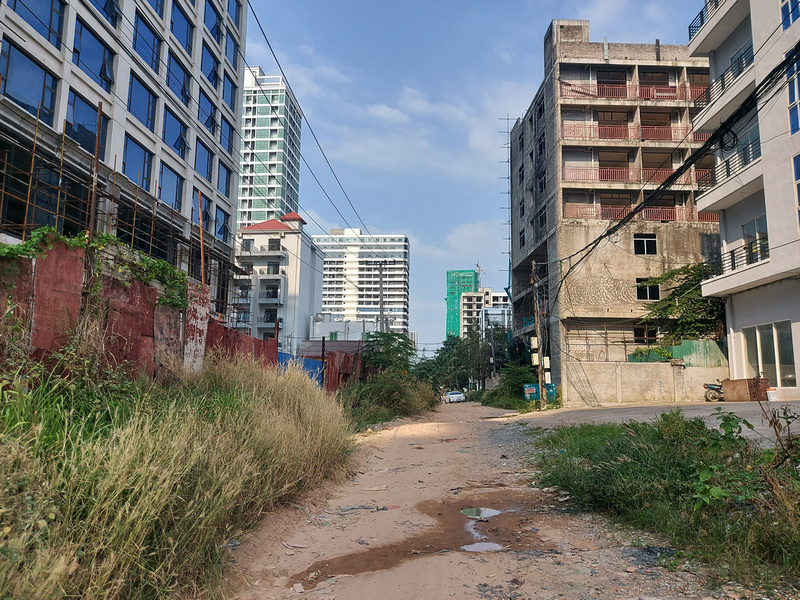 At the city end of Ochheuteal Beach is Serendipity Beach. On a sunny day in the dry season, this beach looks like what a beach in Southeast Asia should look like. 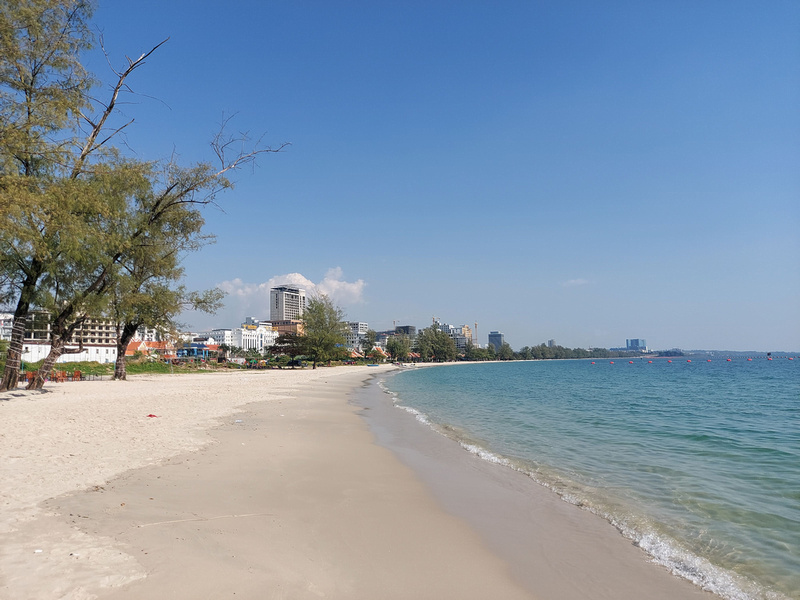 The view behind the beach has changed considerably since my last visit. 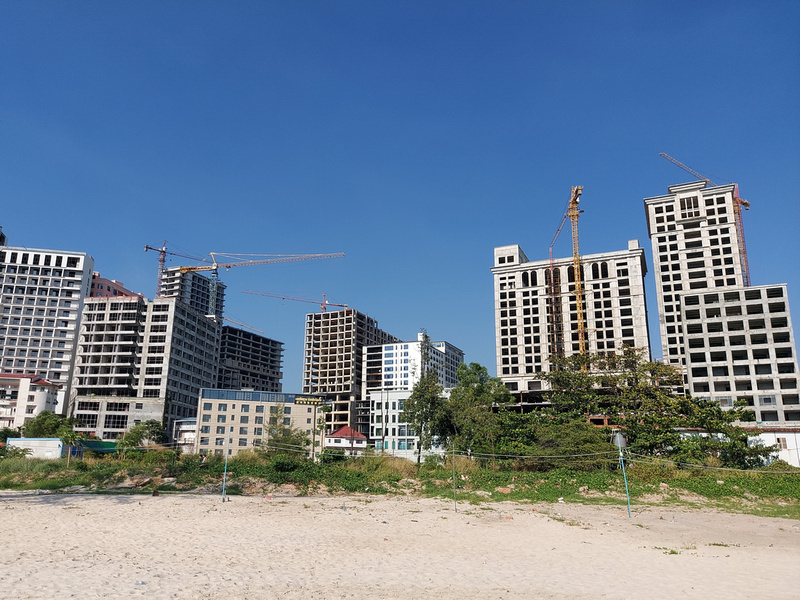 Serendipity was the home of many beach bars which were accessed by Pub Street. All that is gone now. 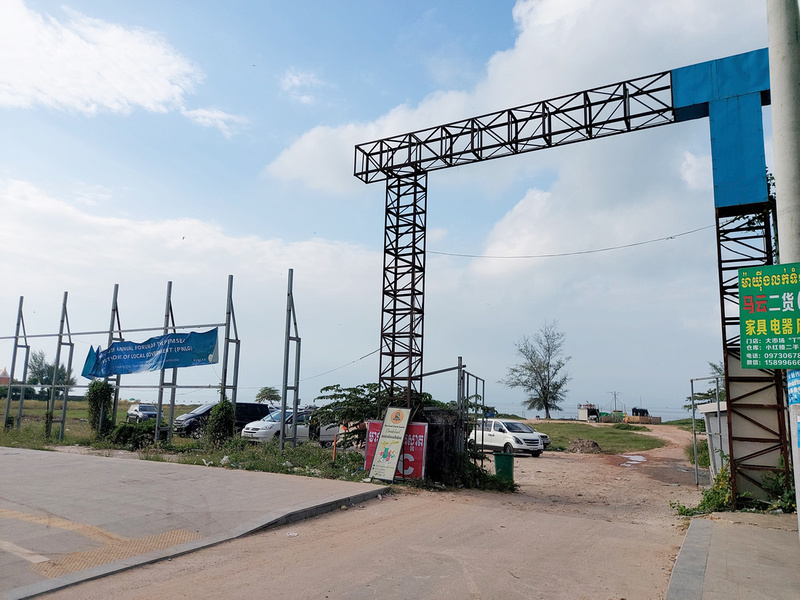 Some of the beachfront has been renovated, and there are new restaurants along the beach. I was here during a holiday weekend in Cambodia, and in the evening the beach was filled with holidaymakers. 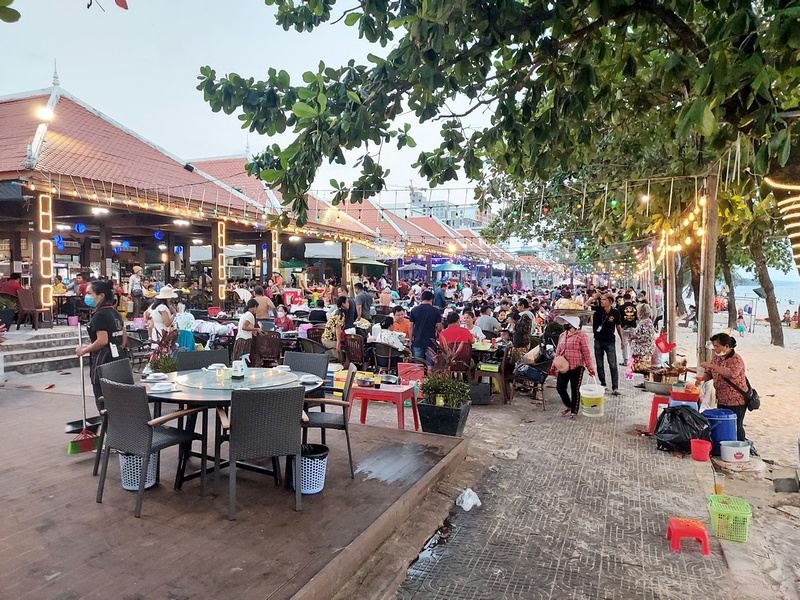 Otres Beach is the next beach down from Ochheuteal, so it was only a matter of time before the beachfront developments made their way here. When I visited Otres in 2012 it was just a long dirt road with ramshackle shops and guesthouses on either side. I didn’t blog about my trip there in 2012, but I was there with my friends Dave and Lauren, who both wrote about it.

This is what the road looked like near my guesthouse in 2018. 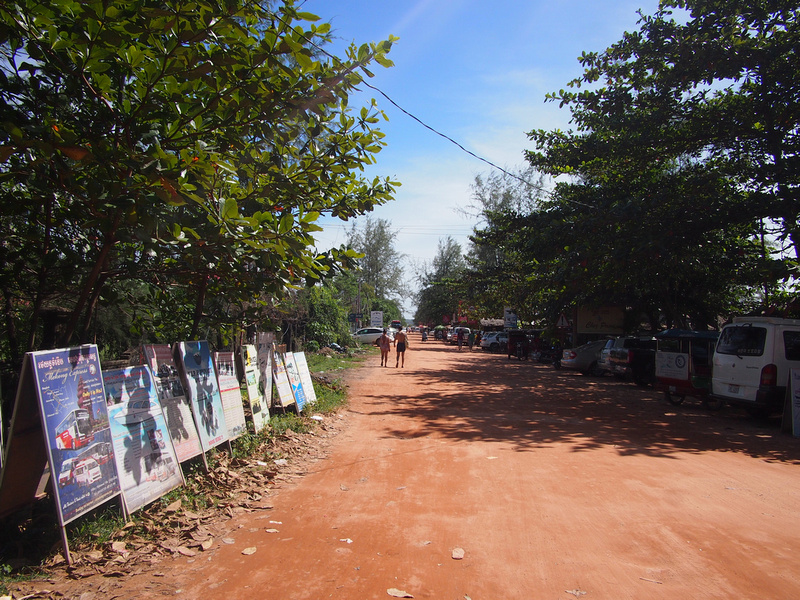 I went back to Otres Beach and I didn’t recognise any of it. I would never have known where I stayed if it wasn’t for the fact that I had starred the location on Google Maps. Here is what the same street looks like now. 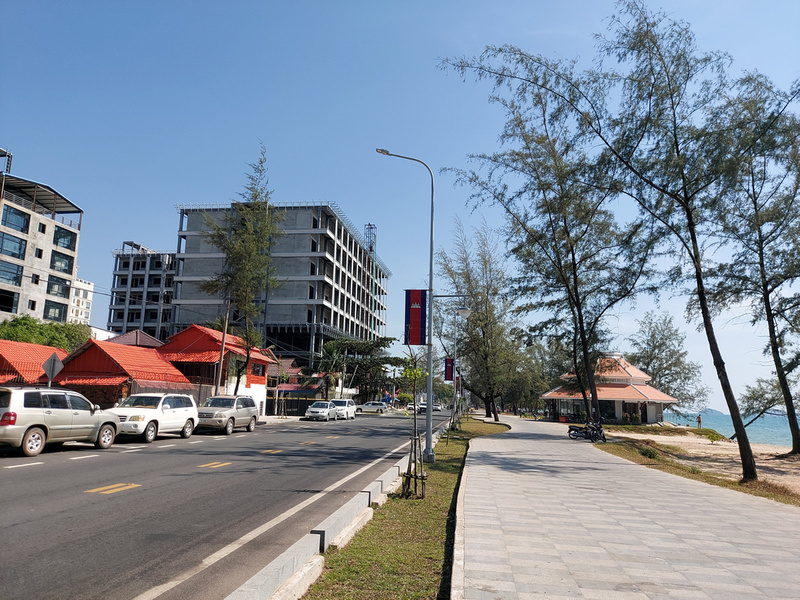 I almost didn’t believe my Google Map, as if it had moved the pin I had dropped. The place I stayed at was closed but not yet demolished. I peered inside to see an old sign, confirming that I was at the right place.

The redeveloped Otres now has a sealed road that replaces the old dirt road that followed the coastline. Everything on the beachside of the road has been cleared, and a walking path has been put in its place. The only buildings on the beachside are some kiosks that are spread out along the beach. 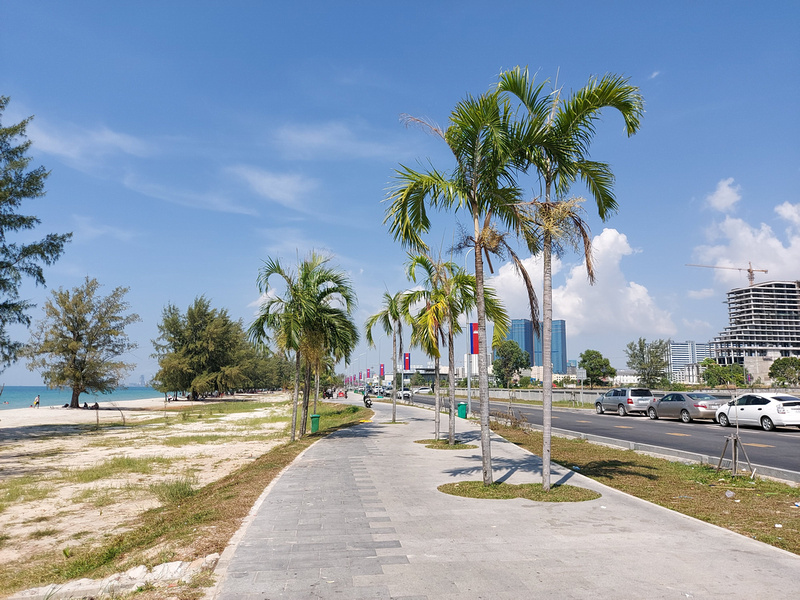 Otres Beach was also filled with holidaymakers (mostly from Phnom Penh judging by the number plates on the parked cars). I know a lot of people are complaining about the death of Otres (myself included), but I can’t complain when it is Cambodians who are enjoying this beach. Cambodia had only been open for a month when I was here, so there were very few international tourists at this point. The bright spot for me on this trip was seeing the beaches used for leisure by Cambodians.

I also know that building on the beach isn’t a good thing, so having this turned into a park is not a bad result. It would have been nice if they had left some bamboo beach shacks, and just make a rule that you can’t build concrete structures on the beach (which is good advice for any beach). 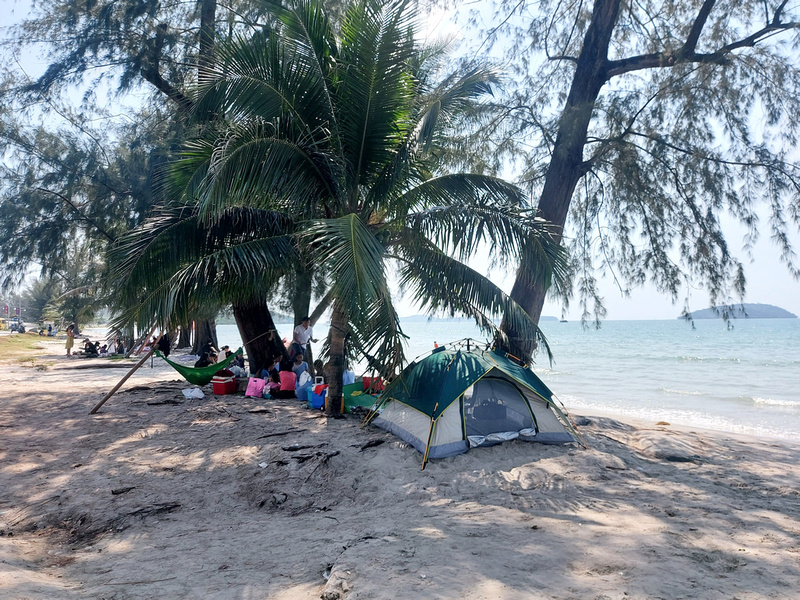 [Otres picnickers on the holiday weekend.]

I also can’t complain about the new road, as there is nothing good about a muddy dirt road. You have to be wary of foreigners complaining about development because they wanted an “authentic” holiday adventure. I am also talking from personal experience. I grew up in a part of rural Australia which was one of the last places on the national highway system to have a sealed road. It was a hellscape when it rained, with trucks getting bogged up to their axles in mud (though it was good when we couldn’t go to school 😊). Me complaining about the roads of Otres being sealed would be like me listening to some Sydneysiders arriving at our place and complaining that it is not an authentic outback travel experience anymore because the roads are now paved. 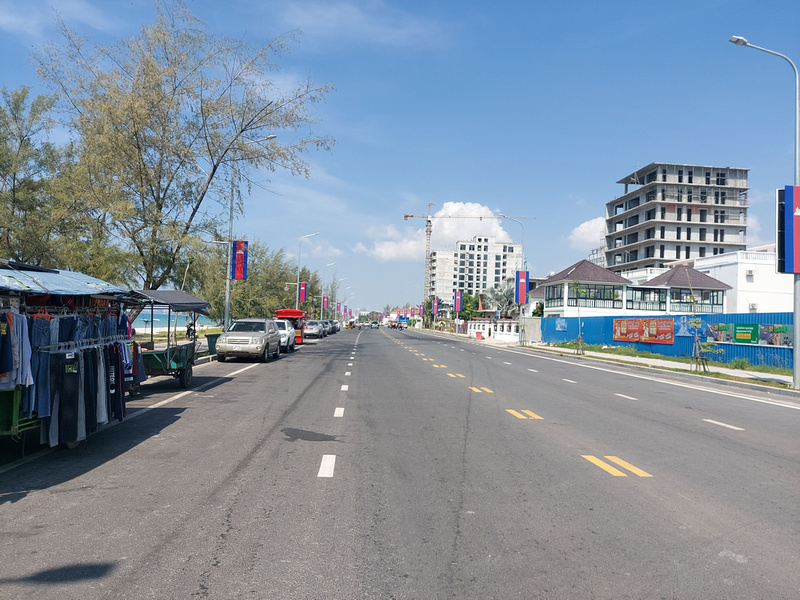 That is not to say that there aren’t grievances to be had about the Otres redevelopment. It is on the other side of the road where all the trouble is. Like that eighties movie, there is big trouble in Little China. There is a new city is being built from nothing that is supposed to look something like this…

This is called KB Central, though there is not much information about it. In the image, you can see a greyed-out building near the beach. This is the big blue building that stands out from everywhere called Golden Sun Sky Casino & Hotel. 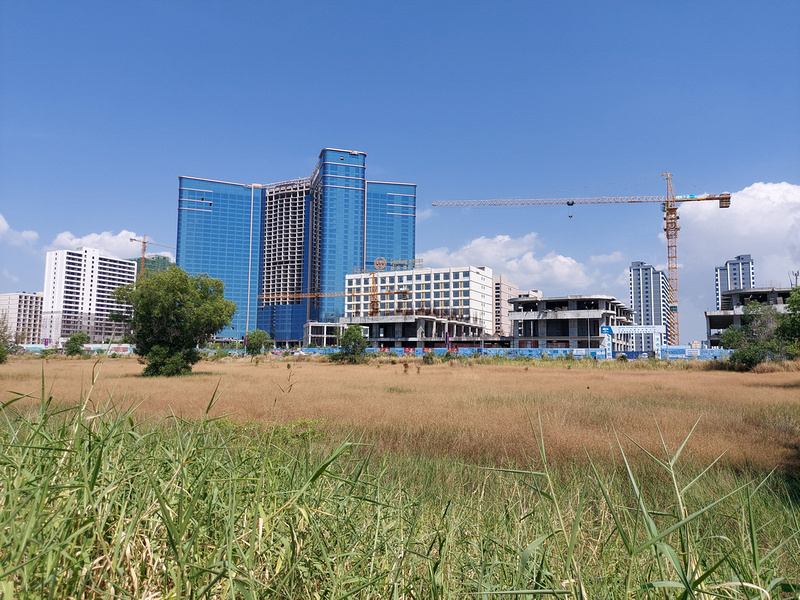 If you look at the KB Central image again, you can see rows of apartment blocks of the same size. This is known as The China Project and is shown on Google Maps as China Town. This is where things start getting evil. The apartment complex has been sealed off, with guarded gates at each entry. Foreign nationals have been held here to carry out various illegal activities, which I wrote about in my Sihanoukville construction report. 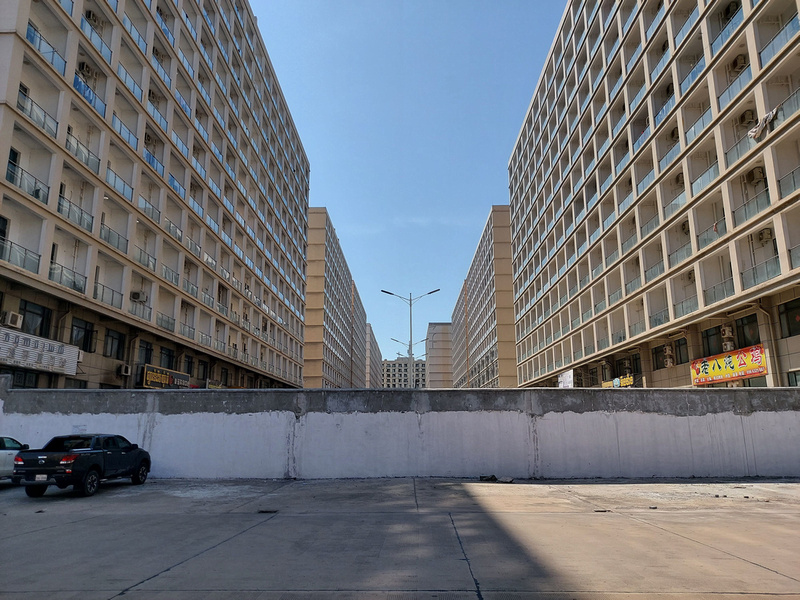 One last observation about Otres is that they have built a new pier at the beach. This will ferry people to the future redeveloped Koh Rong. There is even a helipad here, presumably for so-called “high-end tourists” (the most eye-rollingly overused phrase by tourism boards in Southeast Asia). 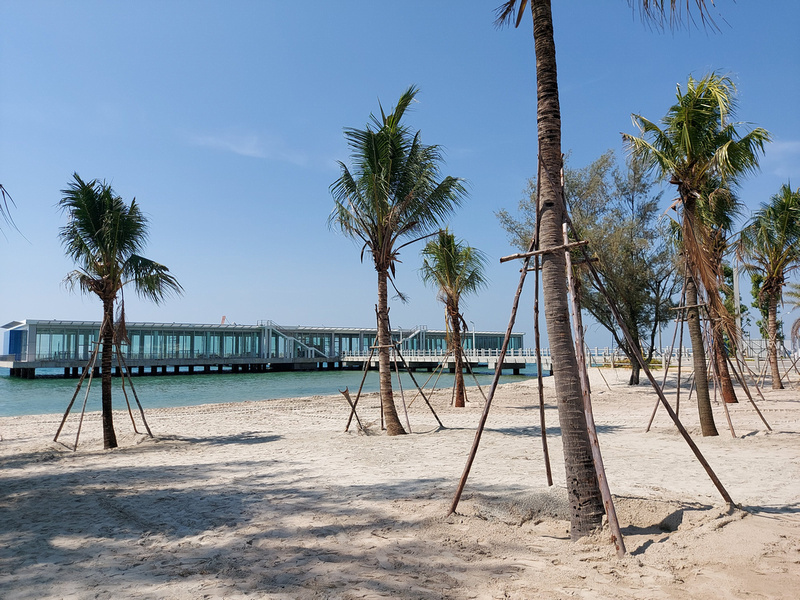 As a non-drinker, the demise of Pub Street didn’t affect my stay here. I thought though that there would at least be a few cafes to hang out in. After all, there are some great cafes in Siem Reap and Battambang, so surely there would be some worthy cafes here. There was not much to choose from, and I ended up spending most of my cafe time at Doi Chaang. I have seen this cafe chain in Thailand but I had never been, so I was grateful to have this to go to. I enjoyed its location in one of the beach kiosks. 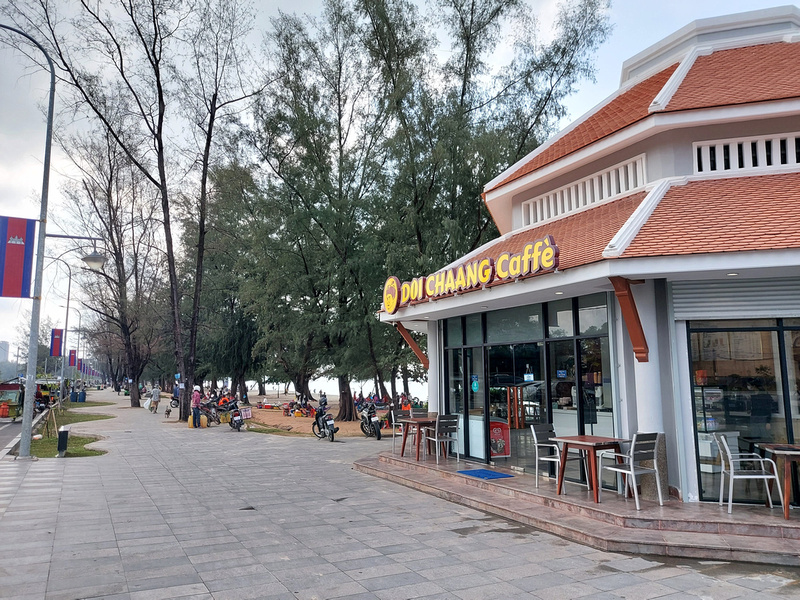 And I also ended up at Starbucks at the Prince Mall, which seemed to be the most appropriate place to be for the New Sihanoukville experience. 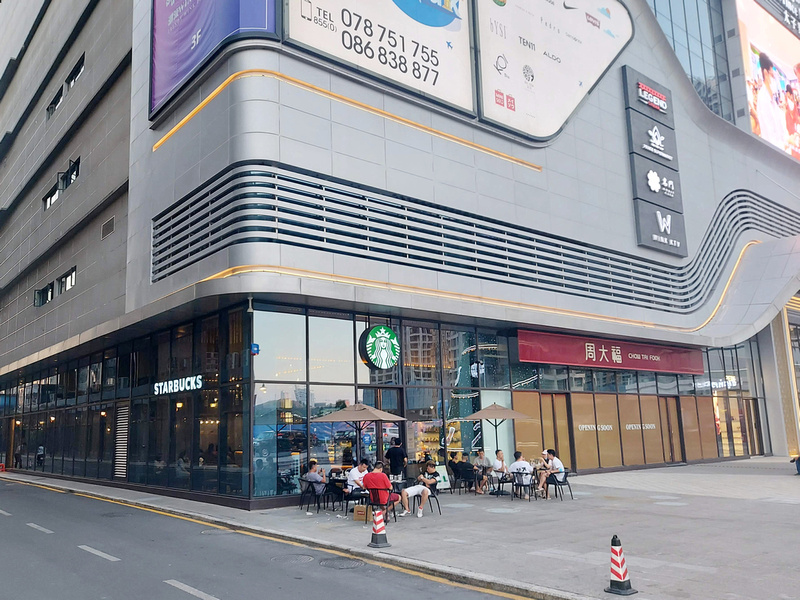 I was here for four days, so this lack of cafe variety was felt. I would have been quite happy to have a branch of Brown Coffee, which is a great cafe from Phnom Penh that has since grown into a national chain. I noticed that they were building a new cafe at Otres Beach. A Brown Cafe might be the start of New Otres. Who knows, maybe in 10 years’ time the new beach road is going to be lined with hipster cafes and it will be one of the top 10 places on Nomad List, populated by Gen Zedders from India who don’t care to hear the wailings of an ageing Gen X backpacker. 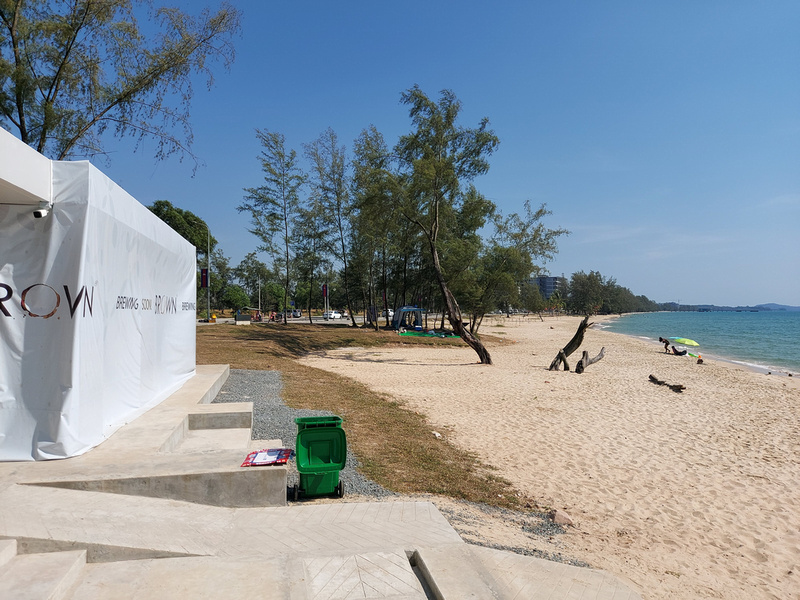 Where to for Sihanoukville?

If I was in charge of this town (a phrase I say to myself too often), I would just get rid of all the casinos. All of them. It just brings crime and misery, and it doesn’t need this as an enticement to bring people here. It’s in a naturally beautiful location, so having a pleasant city by the sea is going to be enough of an incentive to bring people here. Look at Da Nang as an example, which doesn’t have a casino (yet). Turning this into a casino haven just reeks of having no self-esteem, thinking that no one would want to come here otherwise.

The van was filled with European backpackers more than half my age. They were all cheerfully recounting their drunken escapades from the night before, while I was crammed in my little seat with my knees around my ears and mumbling like Roger Murtaugh (a meme that wouldn’t have made sense to most people in the van). Everyone in the van got out at the ferry port, and I was the one weirdo who was staying in Sihanoukville (and for four days!)

It used to be that Sihanoukville was a genuine stop on the banana pancake trail. The word is definitely out that Sihanoukville is not a place to visit, with sites like Intrepid Travel and Rusty Compass no longer recommending it. As Travelfish puts it with thier half-star review, “To reach heaven one must pass through hell“. In this case, heaven is Koh Rong, which is where I would go next. 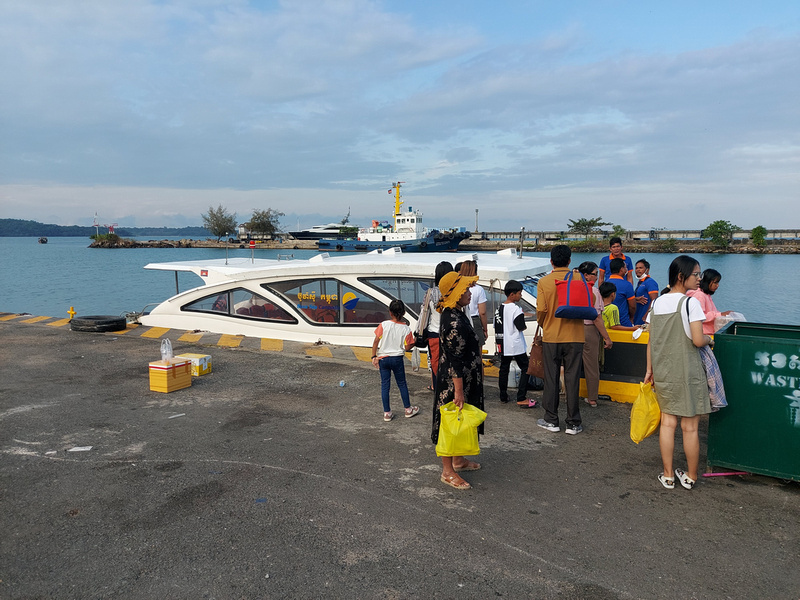