“Guess how many casinos are in Sihanoukville”, my taxi driver asked as we drove from the train station.

“20”, I said with confidence. I had read a news report about it recently and I felt certain with my answer, even though it seemed like a ridiculously high number.

I don’t know if that’s correct, and I haven’t been able to find an updated list. There are definitely more than 20, and I’ve heard of plans for over 100. Whatever the case, Sihanoukville is transforming, and it is being driven primarily by Chinese money. 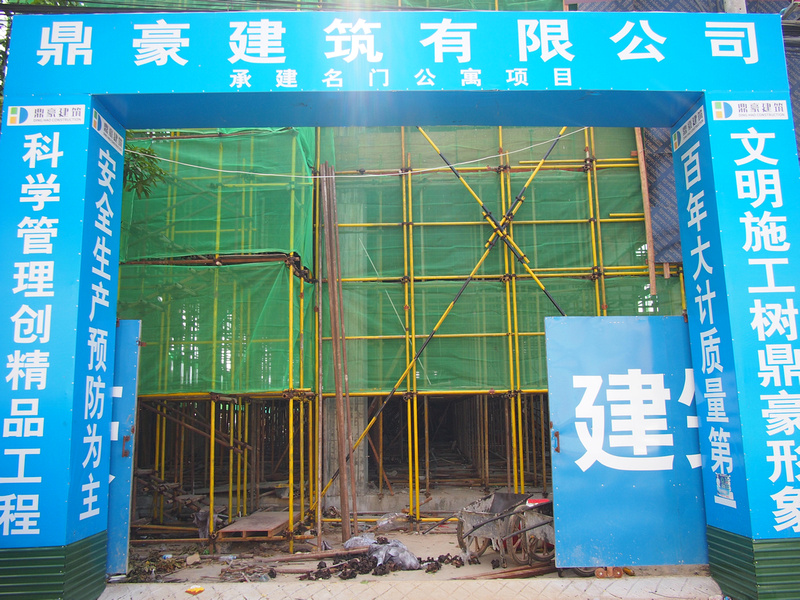 My last visit to Sihanoukville was in 2012, and at that point, it was known for being a refuge for western drug addicts and sexpats, Russian mafia, and for backpackers heading to the nearby islands. That element is still there, but now it is mixed in with the new element of casino tourists.

It’s illegal for Cambodians to gamble in casinos in Cambodia, so these casinos are primarily for the Chinese market. Most of the casinos here have Chinese signage and names. 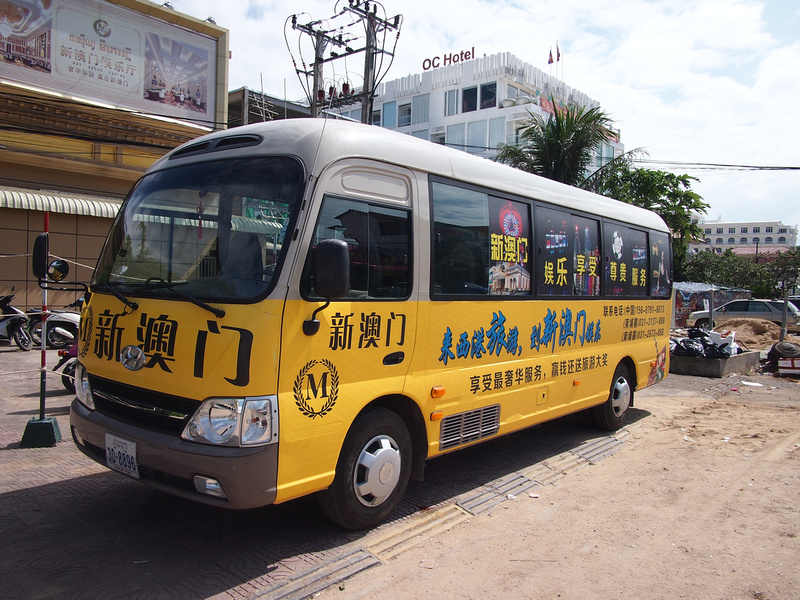 To get an idea of where visitors are coming from I checked the wiki page of the airport. Sihanoukville Airport has been expanding its international connections, with AirAsia finally adding Sihanoukville to its network in August 2017. Most of the flights though are from China, including two airlines that operate a Sihanoukville-Macau service.

Other destinations from China include Chengdu, Wuhan, Wuxi, and Hong Kong. The most randomly wonderful route is Sihanoukville to Palau with Lanmei Airlines. If I go to Palau I may return to Southeast Asia this way.

Macau is often referred to as “Vegas of the East“, even though it has long surpassed Vegas in terms of gambling revenue. Macau is now the yardstick for cities in Asia that aspire to be a gambling hub, and Sihanoukville is seizing the opportunity to be “The Macau of Southeast Asia”. 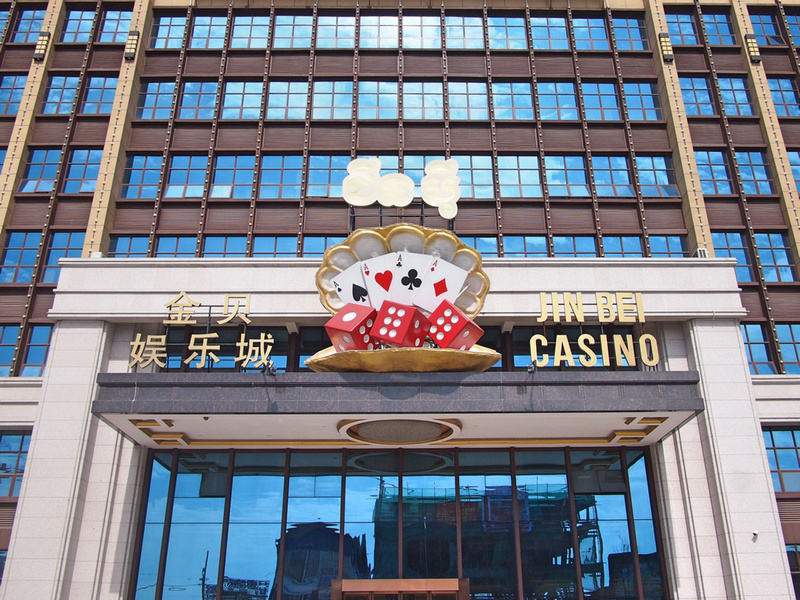 I figured I should at least visit one casino while I was here. I saw the “New Macau Casino”, which seemed the most appropriately named establishment for this trip. I planned my day to visit the beach and then go back to my hotel to hose myself down and put on long pants and a shirt. I needn’t have bothered, as when I arrived there was a group of guys in shorts and flip-flops.

I had my camera with me which set off the metal detectors. The staff at the front desk turned around and gasped at me. It was a small casino so it wasn’t like I could wander around without looking lost. I did a loop of the small gaming floor and left before I choked on the cigarette fumes. 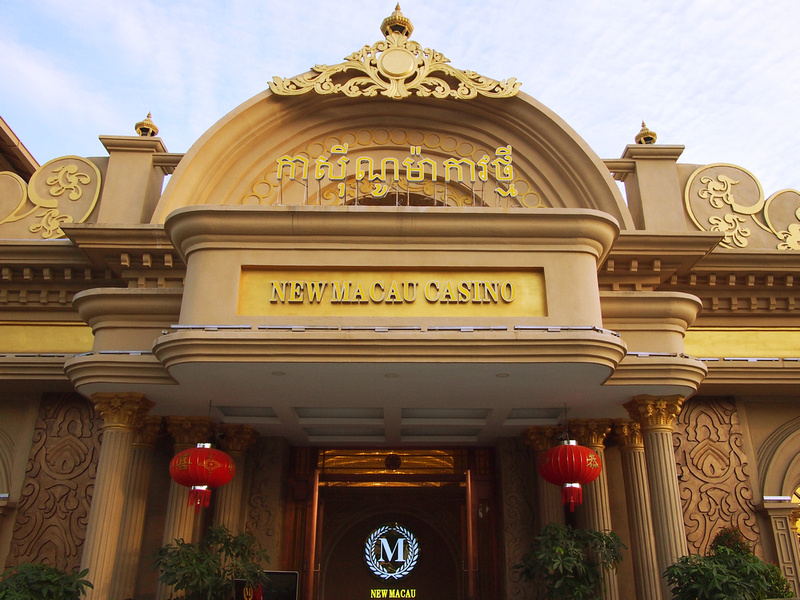 The casinos in Sihanoukville are more like the ones that can be found at the dusty border towns of Poipet and Bavet, opposite Thailand and Vietnam. There are no brand casinos here, so you won’t see The Sands, The Venetian, and other famous names that have set up in Macau.

At this point Sihanoukville is still in brand knock-off stage. I saw one sign promoting the New MGM, which has a lion logo suspiciously resembling the old MGM. And I’m sure this Casino Royal 007 is not a part of the Bond film empire. 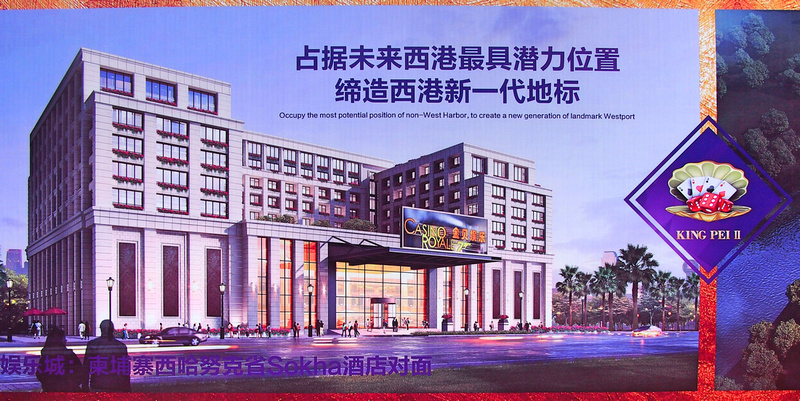 I did a double-take when I saw the WM Hotel & Casino, which has stylised their “W” in exactly the same way as the W Hotel. 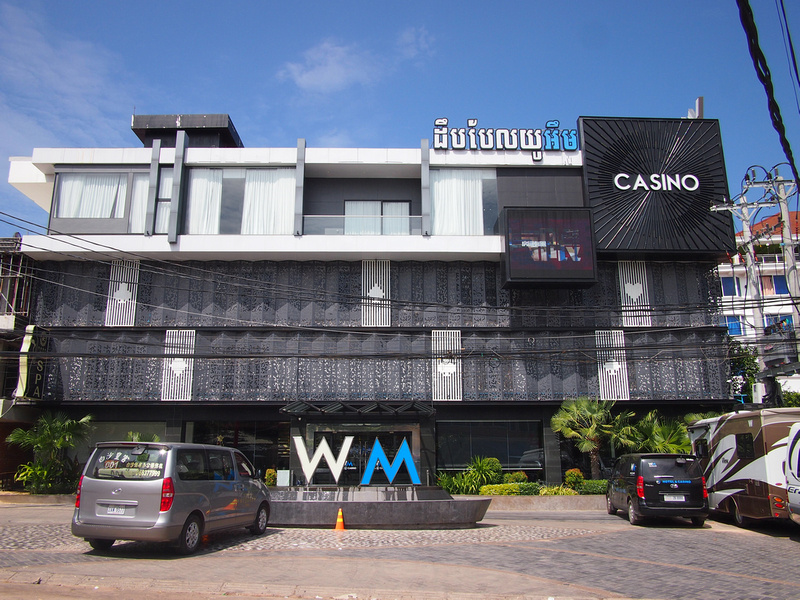 Many of the casinos look like they have been added to an existing hotel. 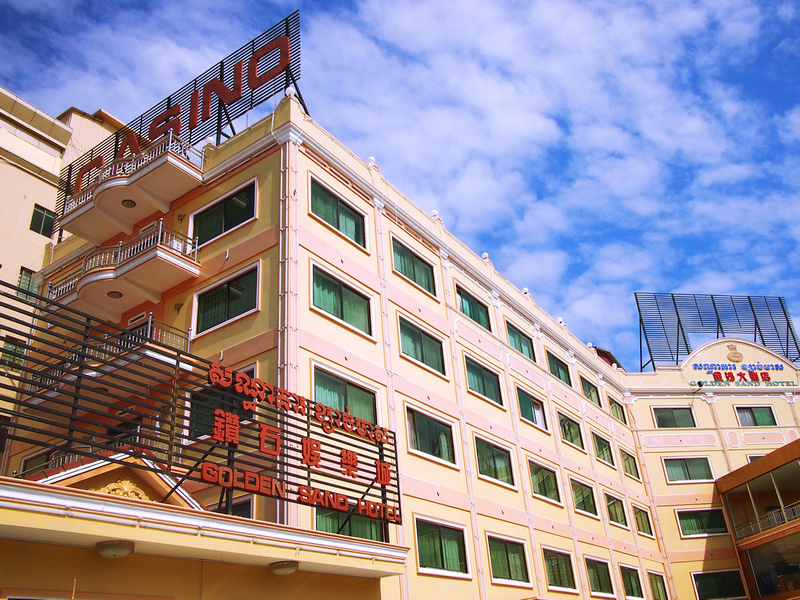 And if you think that 55 is a lot of casinos, many of them are so small that you could fit 55 of these into one Macau mega casino.

When I heard that Sihanoukville was being touted as the new Macau, I had visions of a modern city being built alongside the new casinos. The main problem for Sihanoukville is that all this money is going into building casinos and resorts and nothing else. There are no shopping malls yet or any other touristic diversions away from the beach.

Apart from a few lonely duty free shops there is not many places to spend your winnings. And even though luxury apartments and hotels are going up, outside it’s still old Sihanoukville with its broken footpaths and rubbish on the side of the road. At least Macau has a UNESCO World Heritage old town and shops. 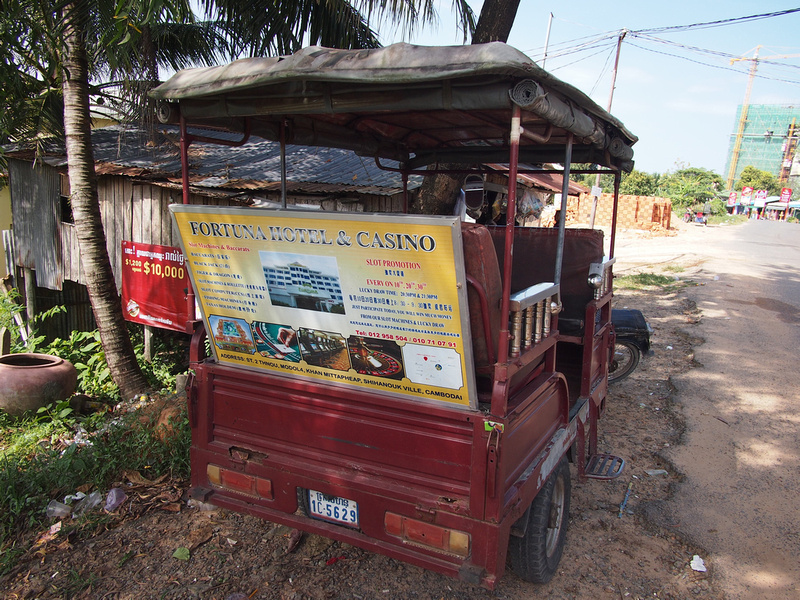 A far better plan for Sihanoukville would be to develop it as a modern seaside city with less reliance on casinos. At this point there is no point in trying to compete with Macau with glitzy casinos. Instead, promote Sihanoukville as a tropical city set on a white sandy beach. The blue skies alone are enough to entice anyone away from a dreary grey Chinese winter. Sihanoukville can still have casinos, but why not in one section of the city and not on every beach. 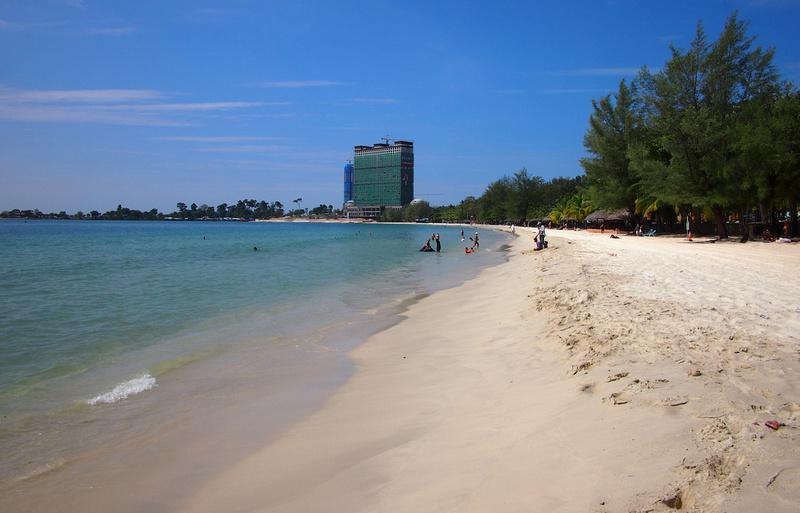 An unintended consequence of the Chinese casino boom is the proliferation of Chinese food. Just as the expat bars along the beach serve western comfort food like hamburgers and pizzas, now there are restaurants serving Chinese comfort food. I found a row of shops selling Shaxian County snacks and Xi’an cold noodles.

I’ve had Xi’an cold noodles in Shaanxi so I had to try this here. I sat down and I was presented a menu in Chinese. I pointed to the sign outside that I wanted Xi’an cold noodles, and the waiter told me to “speak English please”. My Australian accent must have been thick that day. He then said “soup” and I nodded, and then “spicy”, and I nodded again. I got a bowl of soup which was not cold noodles of the Xi’an variety. It was still better than getting a burger on Pub Street. 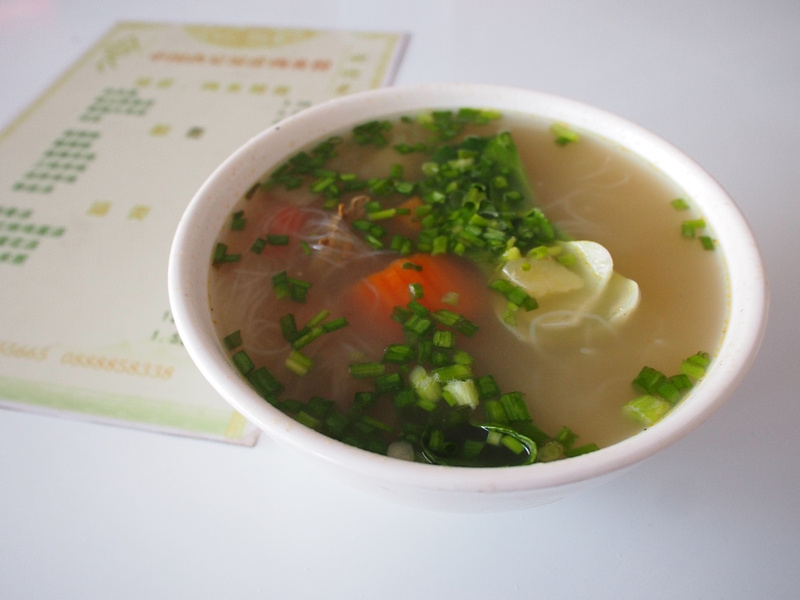 Outside one of the construction sites I found a mobile dim sum stand. 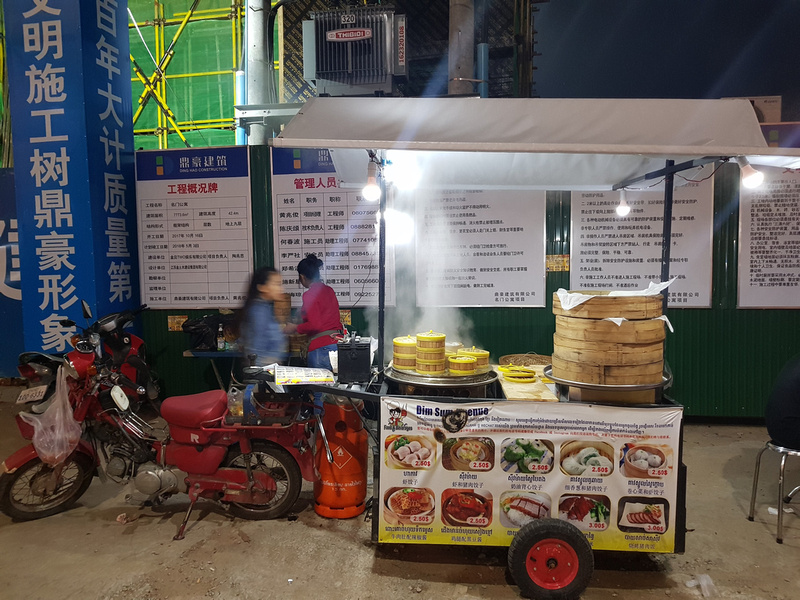 The vendor was outside one of the biggest casinos, like kebab and hot dog stands that stalk night clubs in Australia. 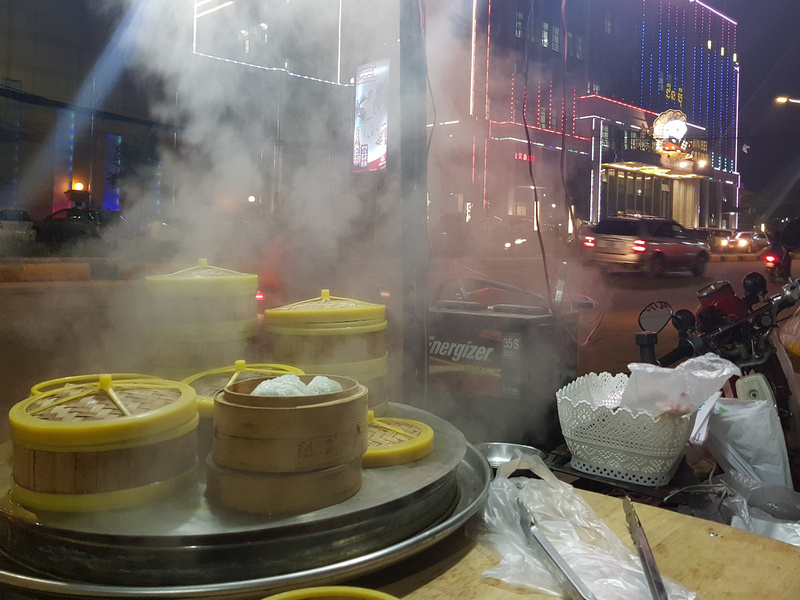 If there is going to be dim sum baskets steaming on every corner then I, for one, welcome our new Chinese casino overlords.

The last days of Otres Beach

At the southern end of Sihanoukville is Otres Beach, which is famous for its backpacker/hippy vibe. Part of my reason to visit Sihanoukville was to see Otres before it’s redeveloped. I had heard that construction sites were setting up so I didn’t know what to expect.

I was happy to find that Otres is still lined with casual beach huts and bamboo bungalows built in the sand. 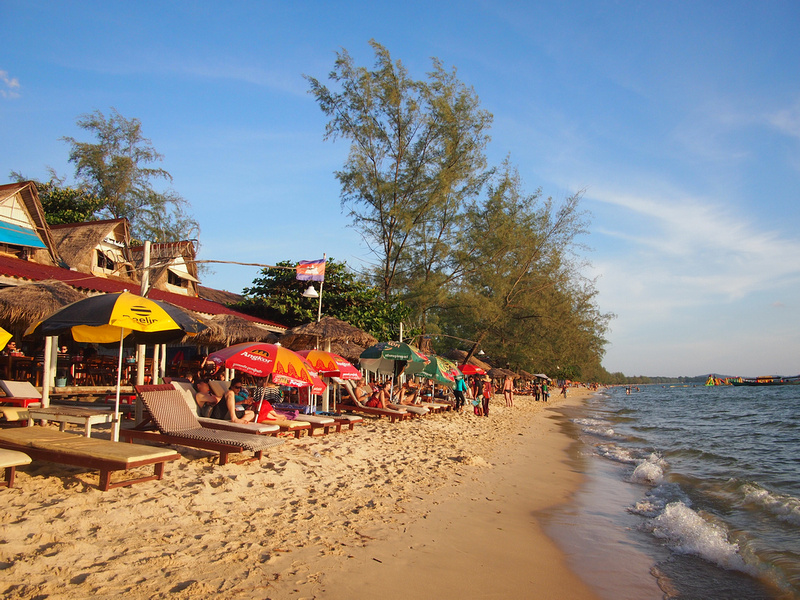 The main road is still a dirt track with little family shops among the guesthouses. 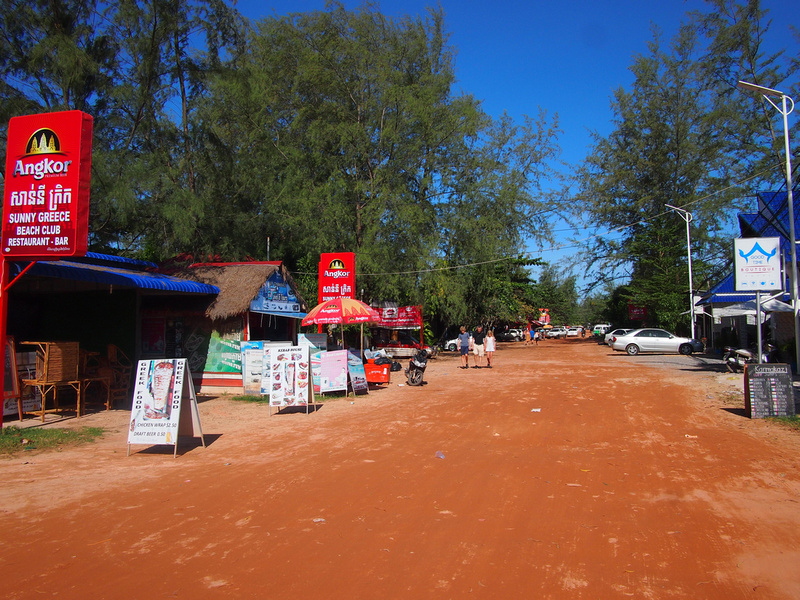 And there are still cows wandering along the road. 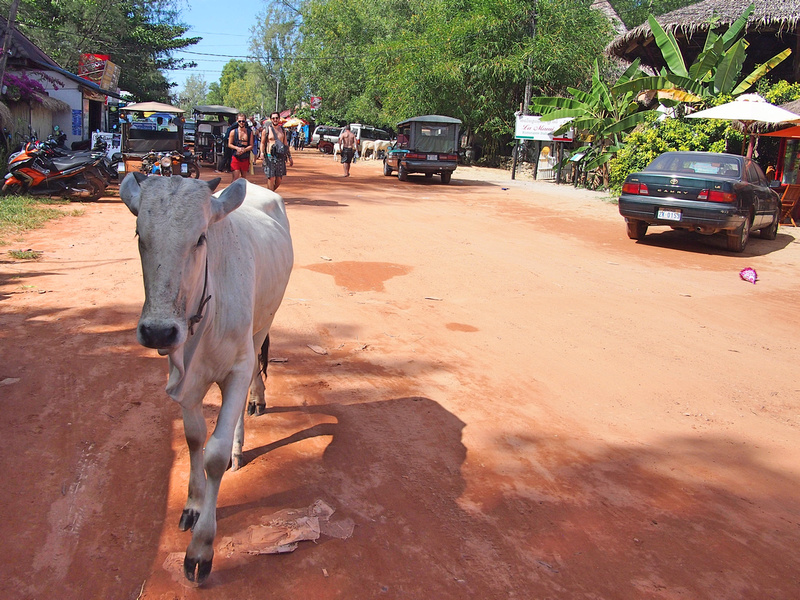 At the end of Otres there is just sand and some trees along the beach. I was here on New Years Eve and the beach was filled with locals who brought their own food and entertainment (ie karaoke machines). 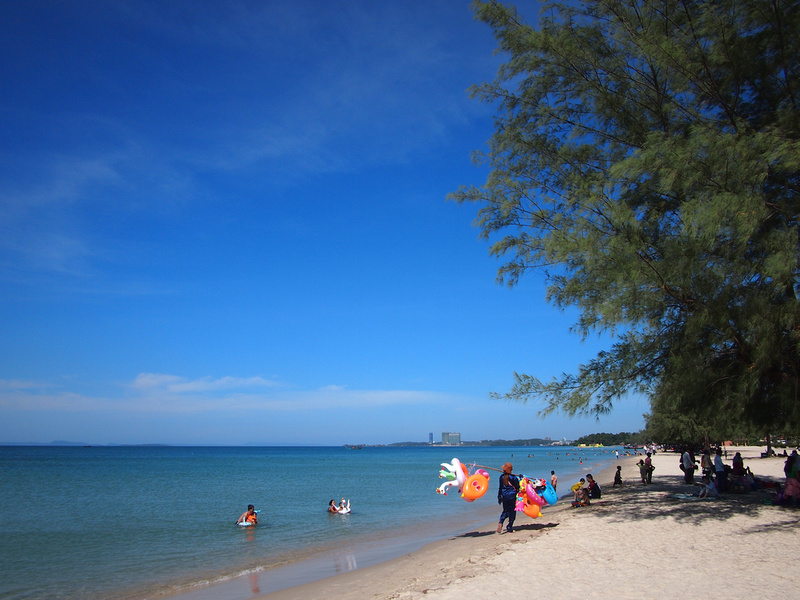 From Otres Beach a construction site is visible at the far end so I walked down to have a look. The site is the size of a small town, and it’s said to be a casino and resort development (I haven’t found a link for it yet). 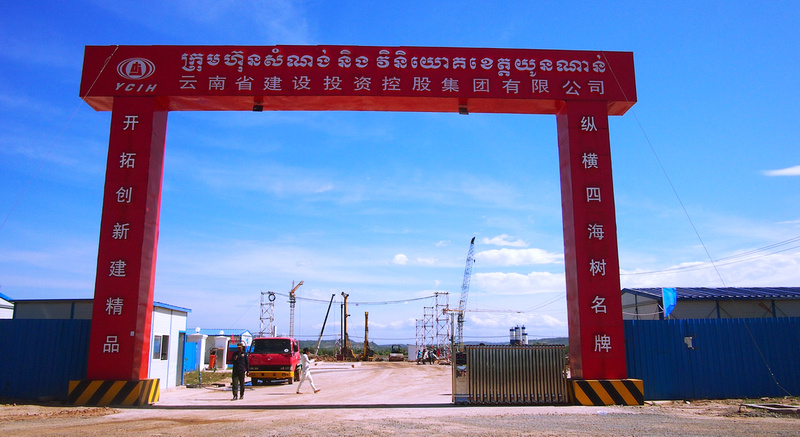 In front of this block is a massive empty beachfront lot which has been linked to Jack Ma from Alibaba. There has been no confirmation of this story, but the speculation sent surrounding property prices soaring.

With developments at either end of Otres it’s only a matter of time before the last coconut is served in a bamboo shack on the beach.

Meanwhile it appears like I caught the last days Ou Chheuteal Beach, which is the beach closest to the centre of the city. Ou Chheuteal is the home of the bars and nightclubs of Pub Street. 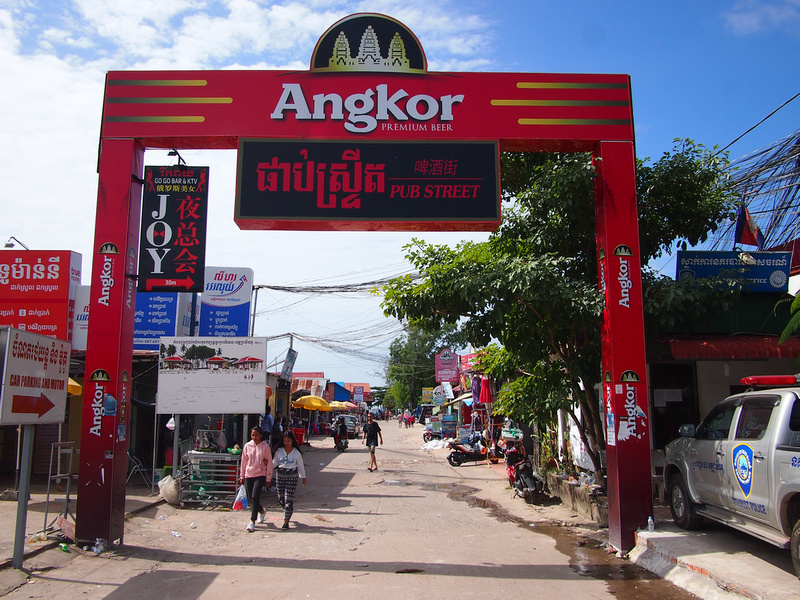 A few days after I left many of the bars were closed and demolished in preparation for an unnamed redevelopment project. 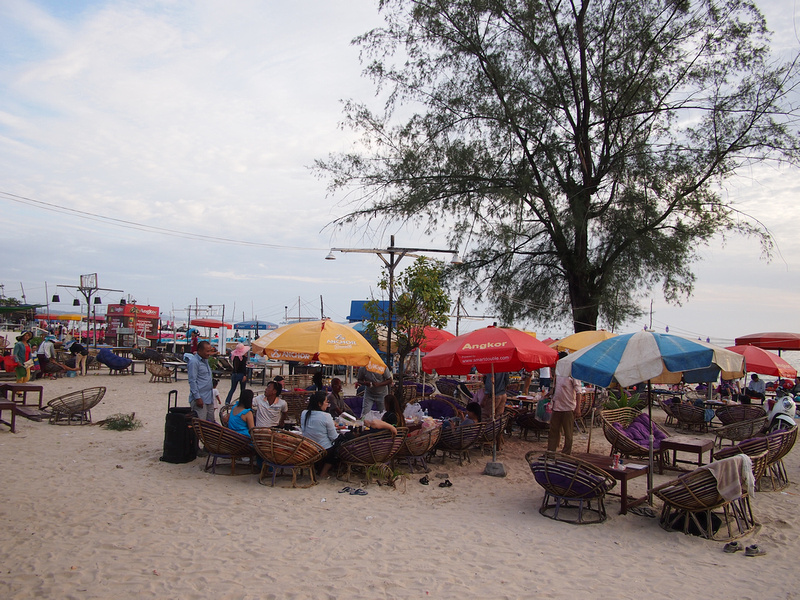 So that’s the current state of Sihanoukville. I’ve still yet to visit the islands off the coast, so maybe I’ll come back and see that it really has become the new Macau of Southeast Asia. 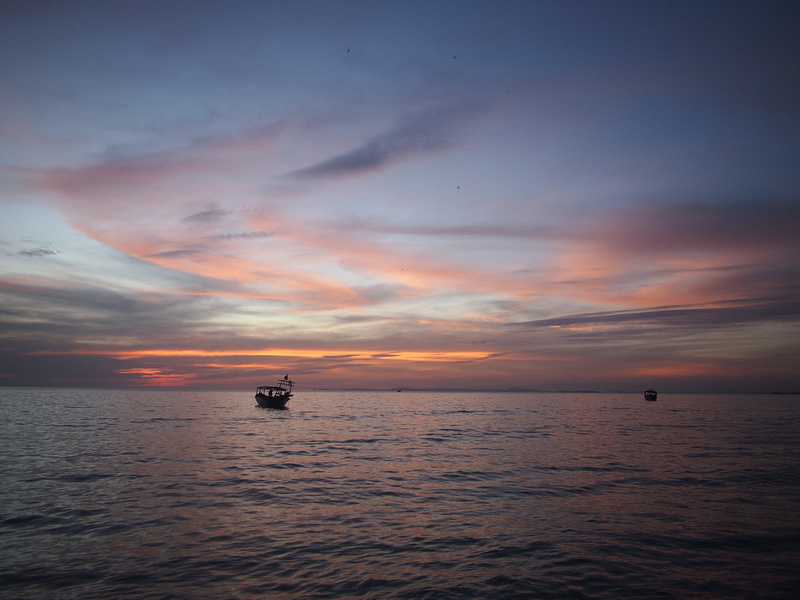