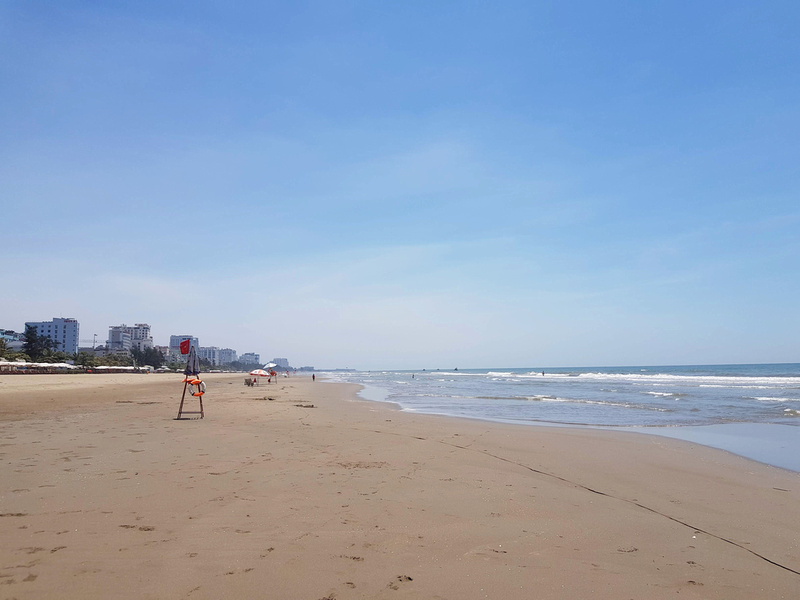 Sam Son is a beach city in northern Vietnam, 16 km east of Thanh Hoa City (which is 150 km south of Hanoi).

It’s not the sort of place that’s listed in Lonely Planet (I checked my 2018 edition), and that’s fair enough. With hundreds of kilometres of beaches to choose from in Vietnam, you have to draw the editorial line somewhere.

Sam Son Beach is what could be a called a hyper-local tourism destination. This is when a destination relies almost exclusively on visitors within a small catchment area. Sam Son is a popular beach destination, but it isn’t a nation-wide travel hotspot. Someone from Da Nang, Saigon, or Can Tho (for example) wouldn’t travel all the way to Thanh Hoa just to go to Sam Son Beach.

You never see Sam Son advertised at travel agencies, and even being based in Vietnam I didn’t know about Sam Son until I saw a news report about a crowded weekend at the beach.

I’ve always had a curiosity for these domestic resort beaches. After seeing this video I filed it away for future reference in case I was travelling in the area. I eventually made it to Thanh Hoa to visit Ninh Binh, so I included time to make a day trip to Sam Son Beach.

Sam Son feels like a beach suburb of Thanh Hoa, though it’s a separate city (unlike An Bang in Hoi An, which is within the Hoi An city boundary). I did a trip report for Thanh Hoa, and it felt more appropriate to give Sam Son a blog post of its own. 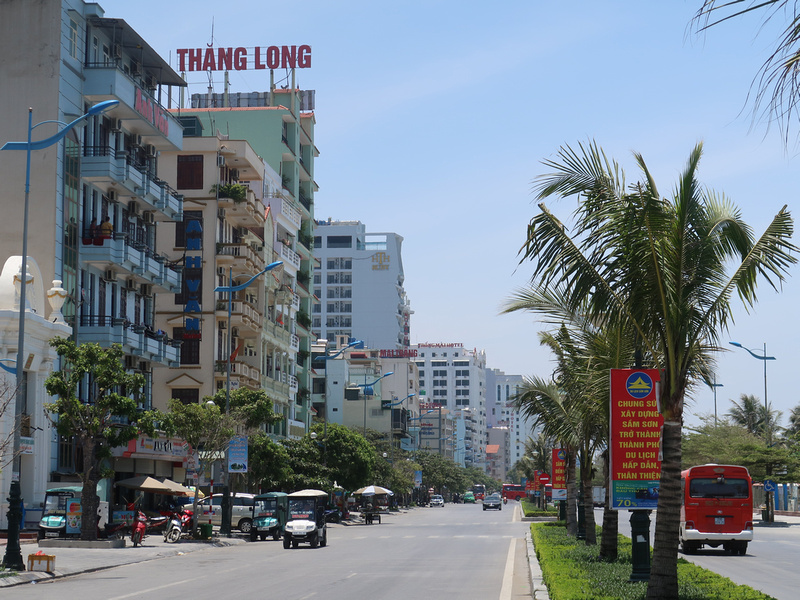 Sam Son is easy to get to from Thanh Hoa, with frequent buses and private minivans plying the road that connects the two cities.

The bus dropped me off near the southern end of the beach, and not knowing what else to do I just started walking along the beach.

Like every self-respecting beach in Vietnam, there’s a corner reserved for fishing boats. 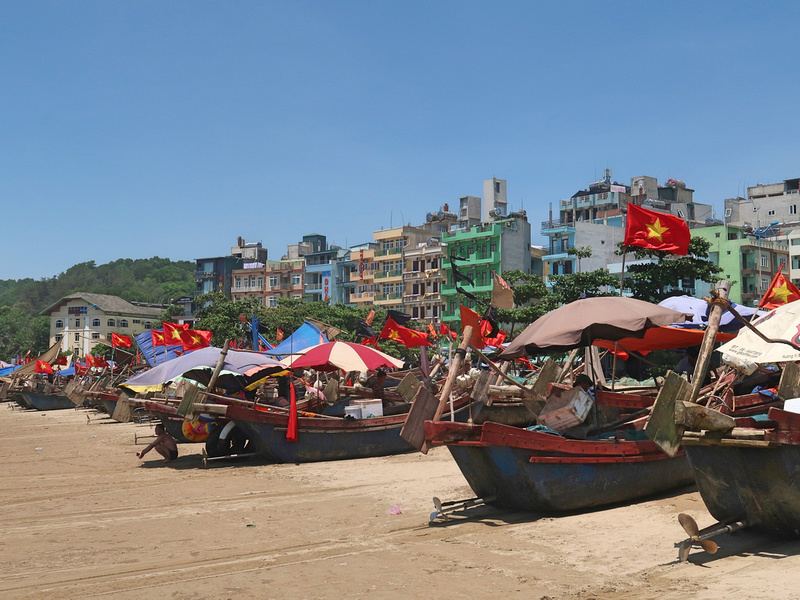 I usually travel without regard for the day of the week or time of year, so I happened to be in Sam Son on a Tuesday afternoon in the middle of a heatwave. That meant that I pretty much had the beach to myself. If I hadn’t seen those news reports of crowded beaches I wouldn’t have known that this beach was so popular. 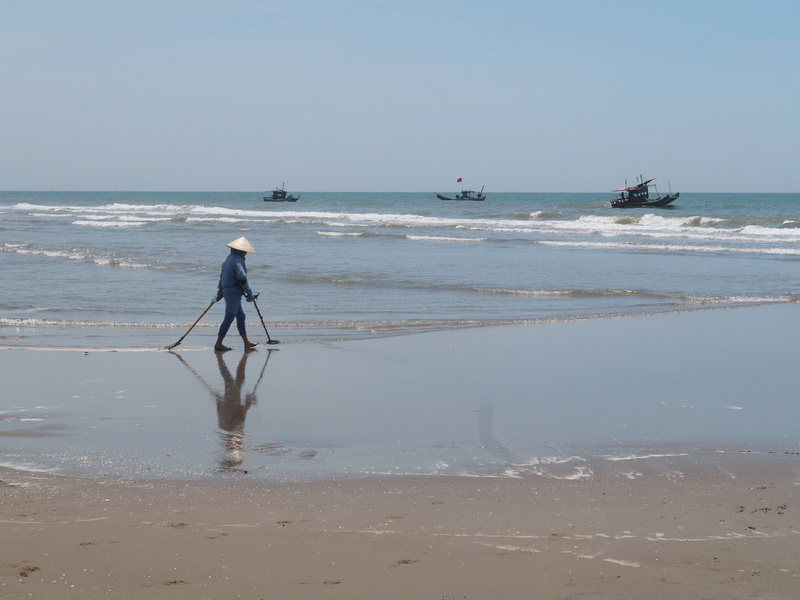 [Only treasure hunters and travel bloggers are out at this time of day.]

The amount of beach chairs suggested that the beach gets busy on the weekend, so I was glad to be here mid-week. 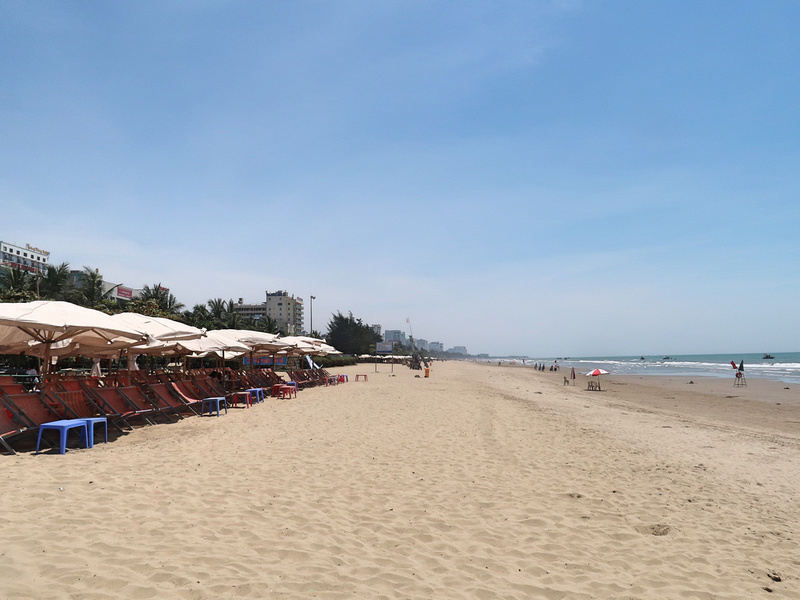 Pictures I’ve seen online of the water range from murky brown to sparkling blue. Today’s water was clear on the shore and the sand was soft with no rubbish to be seen anywhere. If I had come here later in the day when it wasn’t so hot I would have gladly walked the 6km length of the beach and back. 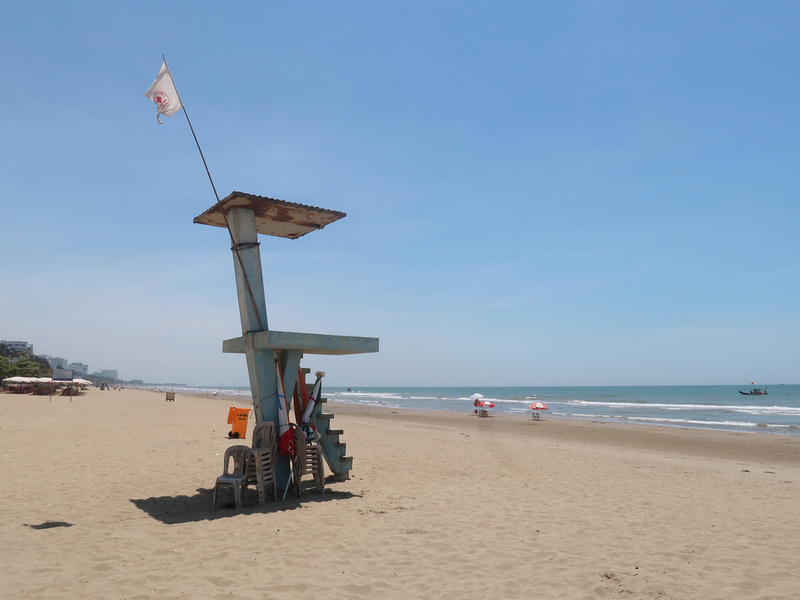 As appealing as the beach was, I was roasting on the sand and I needed to see the urban side of the city. It was hard to get a true idea of what was going on while walking around in the searing heat. I did see tour buses turning up unloading people at hotels. They might have been tour groups from regional towns, and some groups looked like work events. 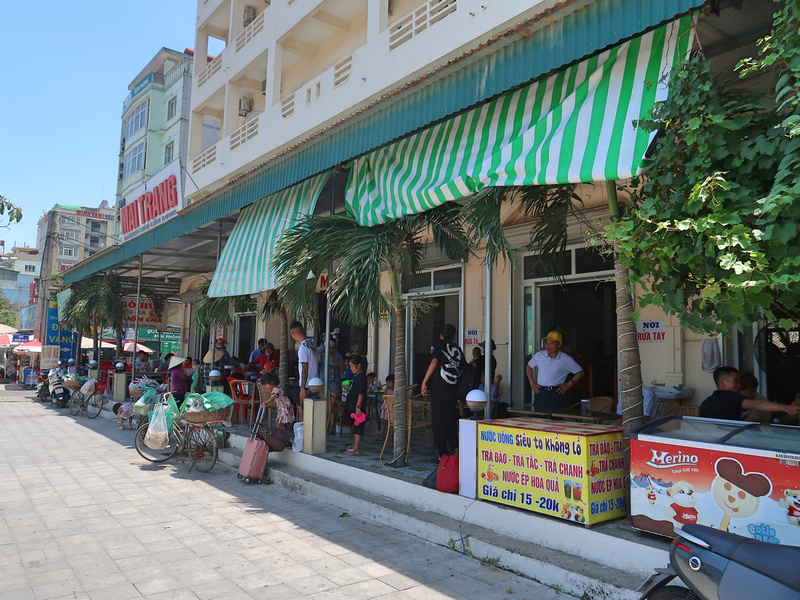 As a chronicler of cities in Southeast Asia I thought there might have been a bigger story in Sam Son. There wasn’t much in the way of new developments to justify a blog post.

Apart from some empty blocks and an abandoned project on a prominent seafront location, there didn’t look like anything new was being built. 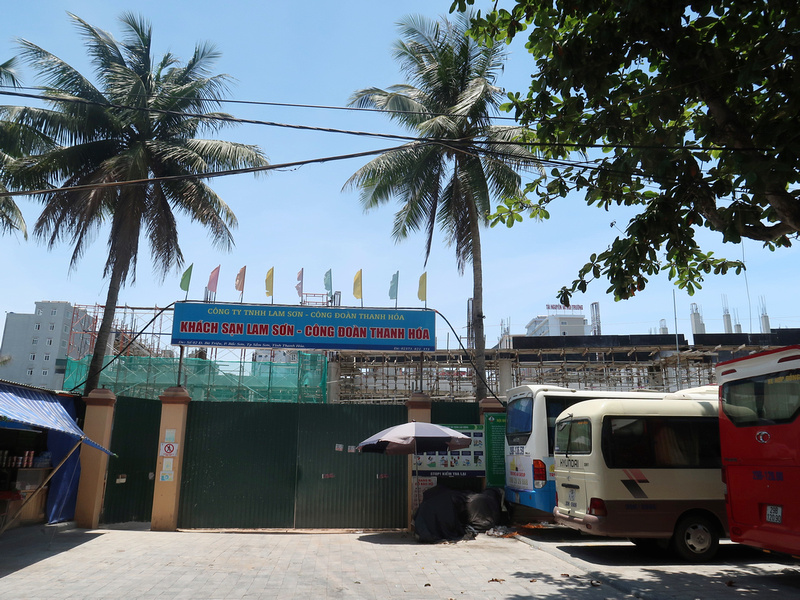 Most of the buildings looked like they were built between the 70s and 90s. There are some eclectic concrete designs on some of the beach front hotels. 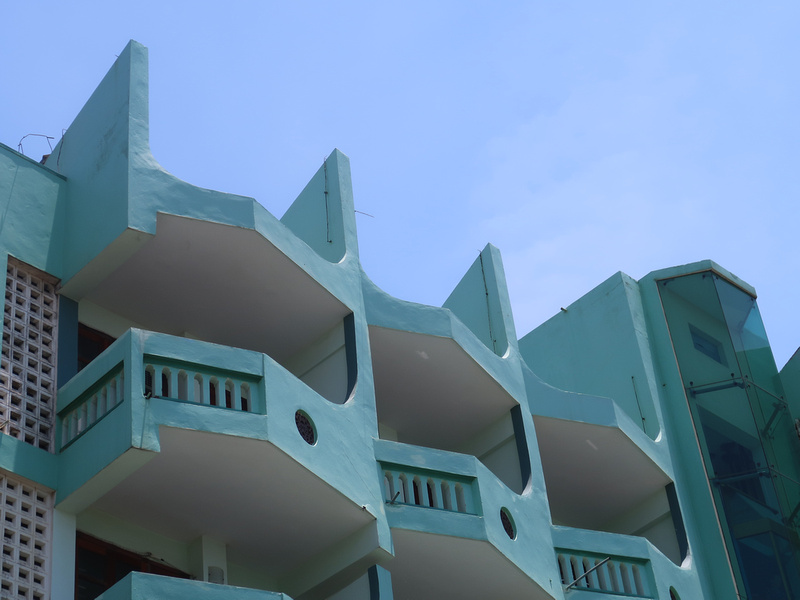 I had mentioned in my visit to Tuy Hoa that I use Highlands Coffee (the Vietnam coffee chain) as a measuring stick for domestic development. There was no Highlands here when I visited, and even KFC and Jollibee aren’t here yet. In fact I don’t recall seeing any kind of international food. People come here to go to the beach and eat fresh seafood.

In provincial Vietnam I always hunt out garden cafes to have a Vietnamese iced coffee, and there were some great spots on the beachfront to have a coffee. 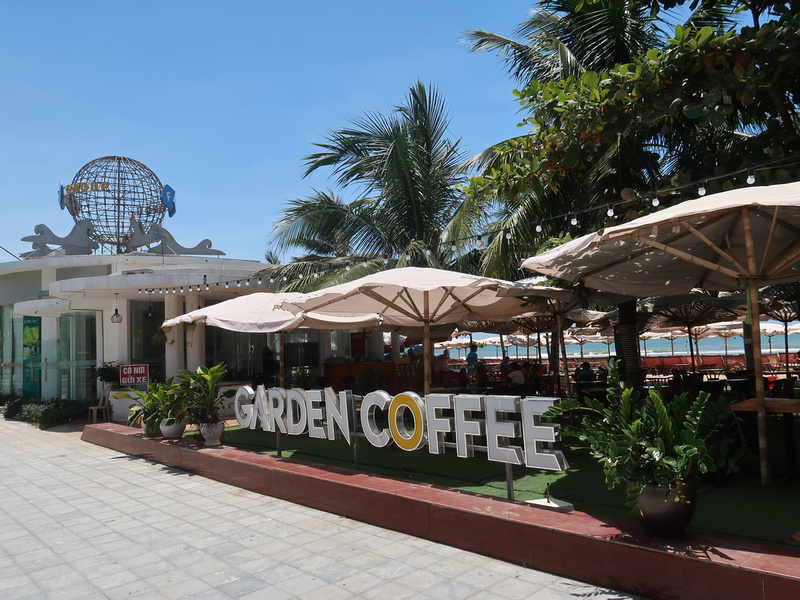 Sam Son looks like what I think Vung Tau might have looked like 20 years ago. Vung Tau is “the beach of Saigon” as it’s the closest beach to the city. Vung Tau is more international though as it’s a gas and oil hub and it has a community of international retirees. 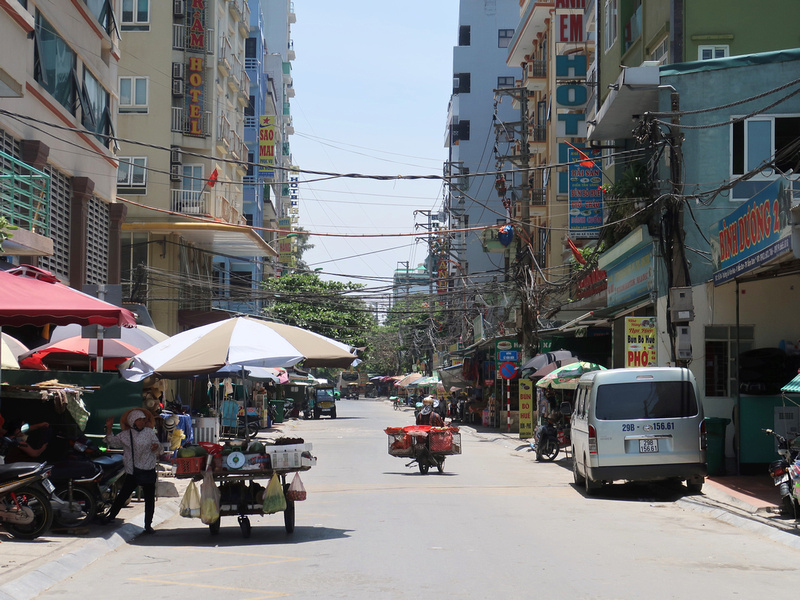 Vung Tau is now going through a transformation, with new apartment towers rising on the skyline. It also has retained some of its colonial buildings, so it has a good variety of architecture.

The brief Wikipedia page for Sam Son mentions that French colonialists built villas here, but if there were any remaining they were not in conspicuous locations.

Some of the back streets have some beautiful tree-lined streets that look like the old districts of Hanoi or Saigon. Unfortunately I didn’t find remnants of old villas. 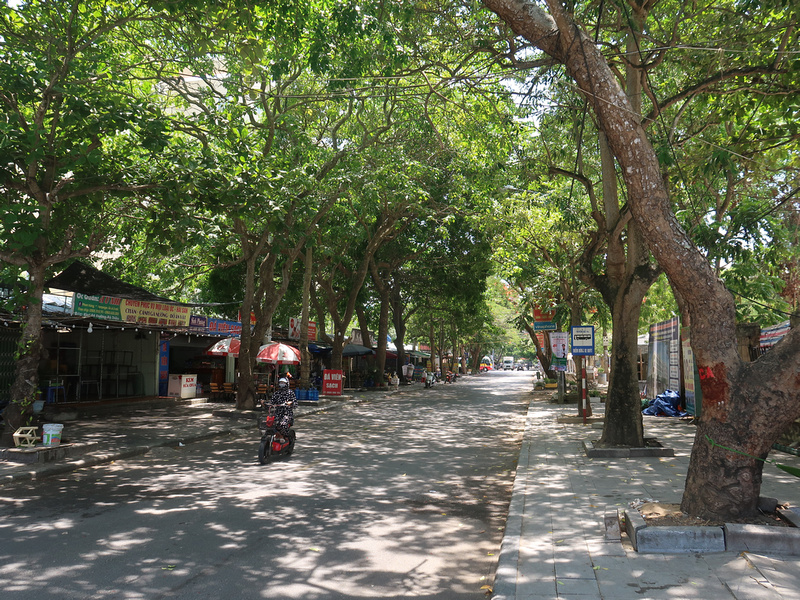 There isn’t much written about Sam Son on English language sites. There’s no Wikitravel page for Sam Son, and the Wikitravel page for Thanh Hoa unhelpfully lists Sam Son as the main thing to do. I couldn’t find anything online about historical buildings of Sam Son.

Due to it’s geographical location and limited transport options, Sam Son is in a tourism blindspot that will likely keep it confined to this hyper-local market. 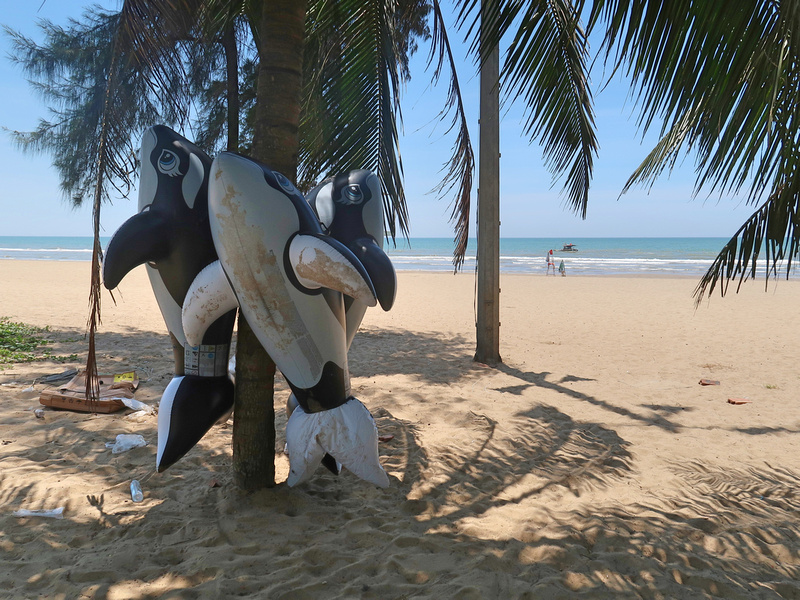 Sam Son is 165 km from Hanoi, which is about 2 hours by car and 3.5 hours by train via Thanh Hoa. The closest beach to Hanoi is about 100 km away, so it also faces competition from beaches more convenient to Hanoi.

Before the advent of low cost airlines, flying to a beach resort destination wasn’t a viable option for most Vietnamese. For a Hanoian it’s now just as easy to fly to Phu Quoc than to drive to Sam Son. 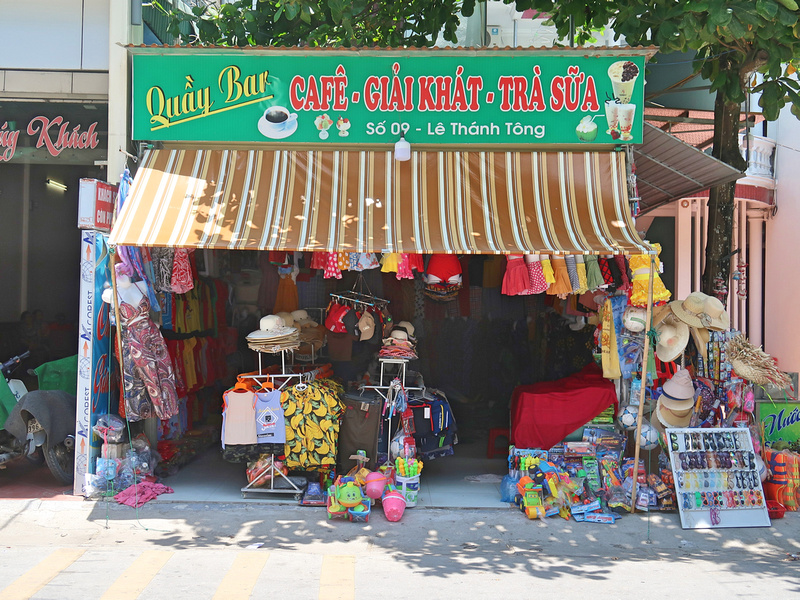 If you were to fly here from somewhere else in Vietnam, it’s another hour of driving from Thanh Hoa airport to Sam Son. Tho Xuan (the airport of Thanh Hoa) was recently upgraded to international status, though it will be for the benefit for the people of Thanh Hoa and the the surrounding industries.

Cities can of course reinvent themselves, so who knows what the future holds for Sam Son. The city put on a street carnival in 2019 in a bid to promote tourism, and at the northern end of the beach there’s a new FLC resort. Bamboo Airways (owned by FLC) have recently started flights to Thanh Hoa, so it’s possible they will promote Sam Son nationally to fill beds at their hotel. 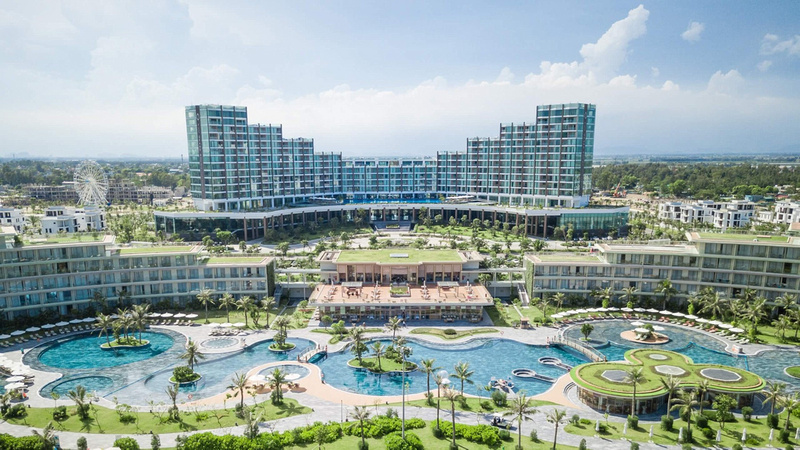 Before I left I saw this plan for for a new tower development. 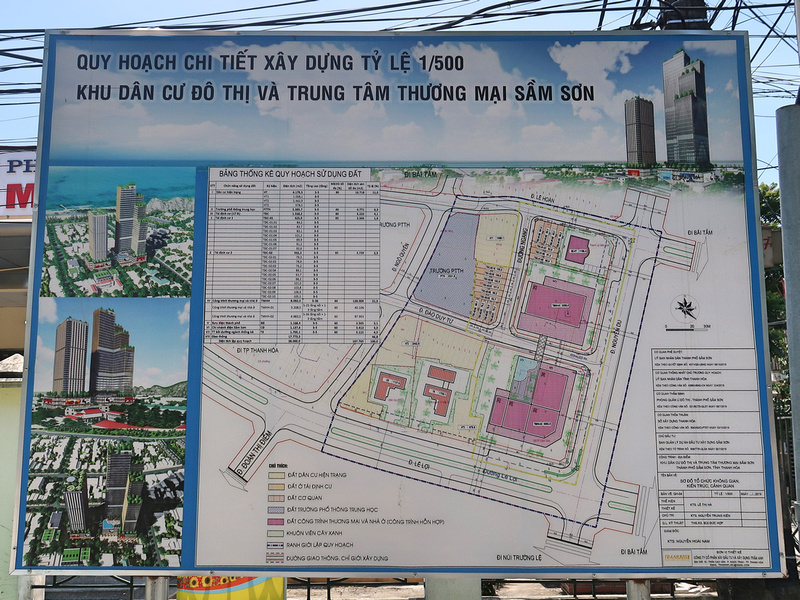 Maybe Sam Son is going to have a Da Nang or Nha Trang moment and become the next boom city of the north.