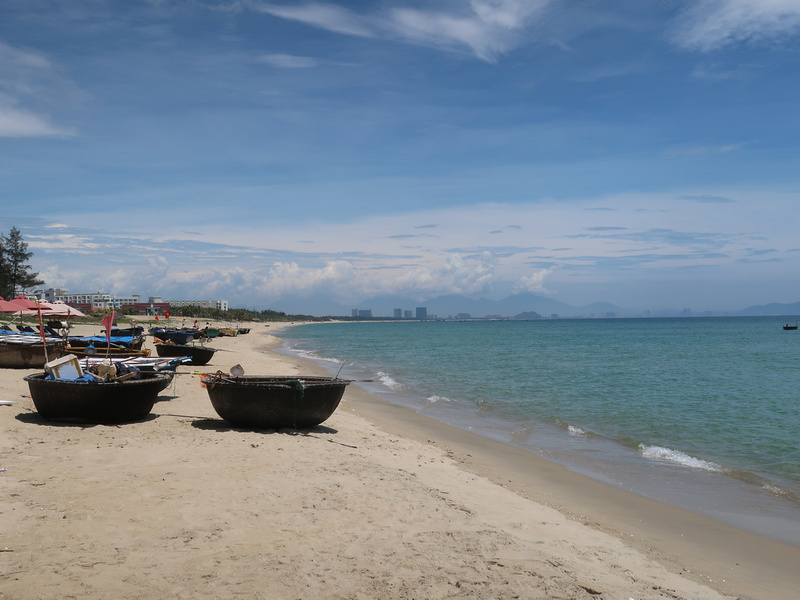 Da Nang and Hoi An are becoming increasingly popular as bases for digital nomads. The two cities are connected by the same long stretch of sandy beach, and if you stand on the beach of Hoi An you can see the burgeoning Da Nang skyline. 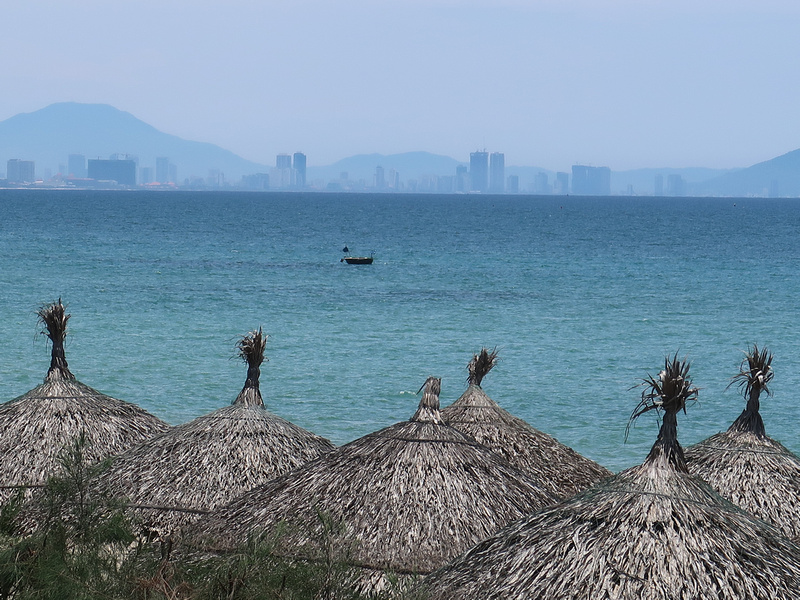 There are two beach neighbourhoods in particular that have become favoured with the digital nomad/expat scene. In Da Nang it’s the My An area, while in Hoi An it’s An Bang Beach. They are only 20km apart, but they offer a completely different urban living experience.

I stayed in both places in June 2020, and this is a brief overview of My An and An Bang.

A map of Da Nang and Hoi An, with some of the places mentioned in this post for reference. 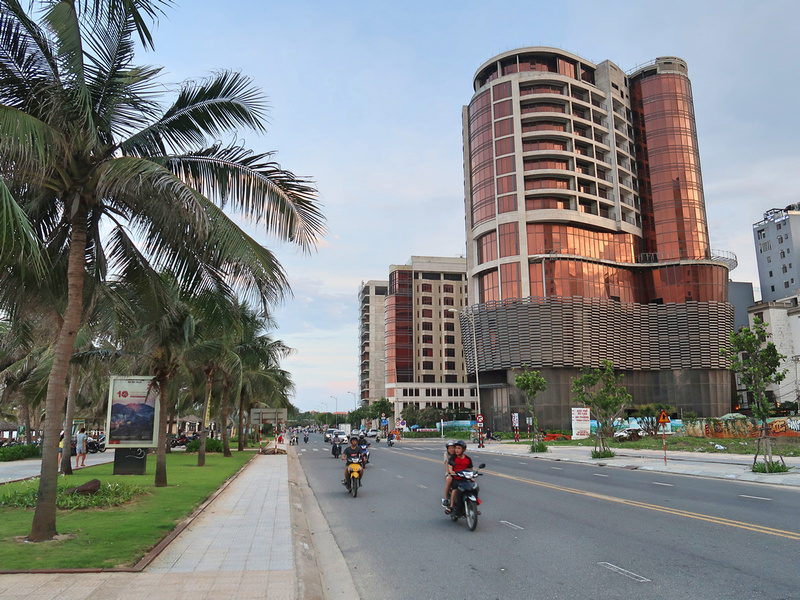 My An is a ward (a sub section of a city district) on the beach front of Da Nang. This beach area is still a work in progress. 10 years ago it was mostly empty lots, and if you had the foresight to buy land here then you would be doing well for yourself today.

One of the drawbacks of the area (at the time of my visit) was that there is still a lot of construction mess and noise everywhere. 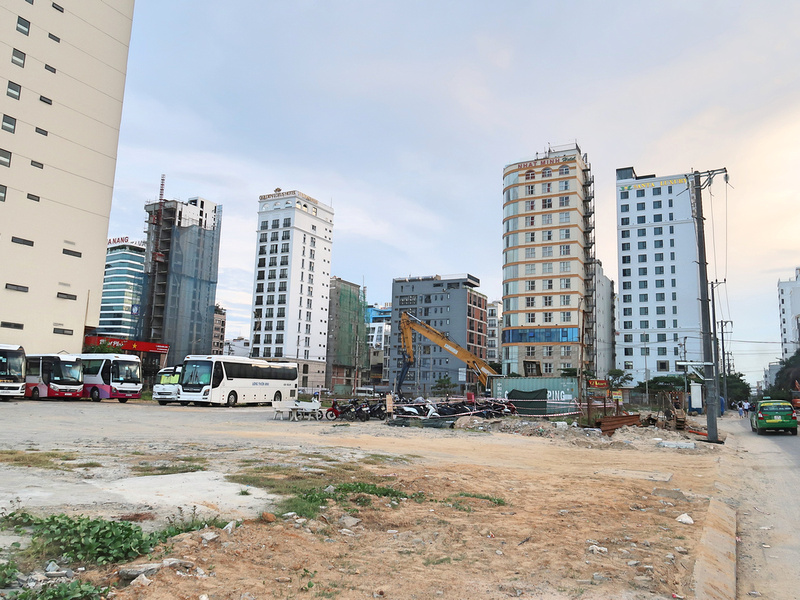 If someone asks me where to go in this area I send them to 43 Factory Coffee Roaster and then work your way from there. This is one of my favourite cafes in Da Nang, and the building is a good example of what is going on in beachside Da Nang. 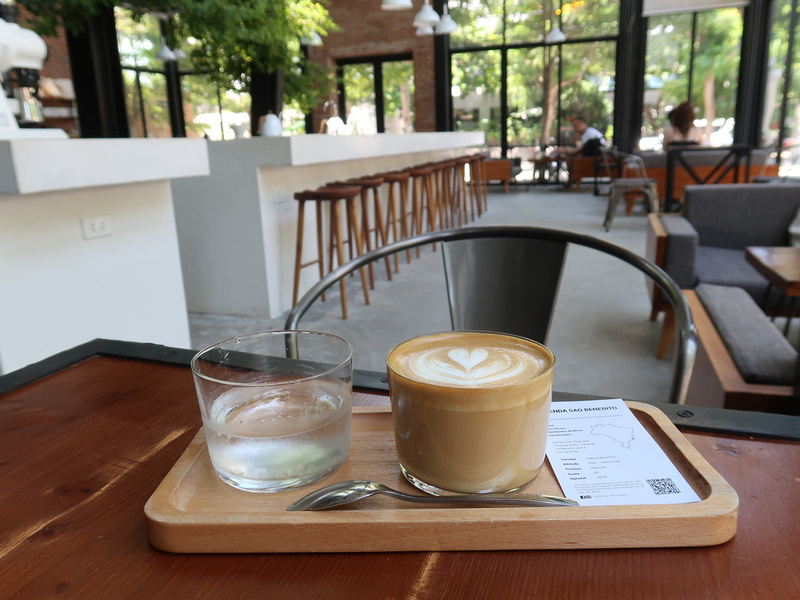 It’s a purpose-built cafe that has outdoor seating inset in koi ponds. If you have a look behind the building you can see empty land that has yet to fill in. There is no way you could do this in inner Saigon or Hanoi, and eventually it will be too expensive in Da Nang as well. For now though, businesses have a blank sheet in which to create something new. 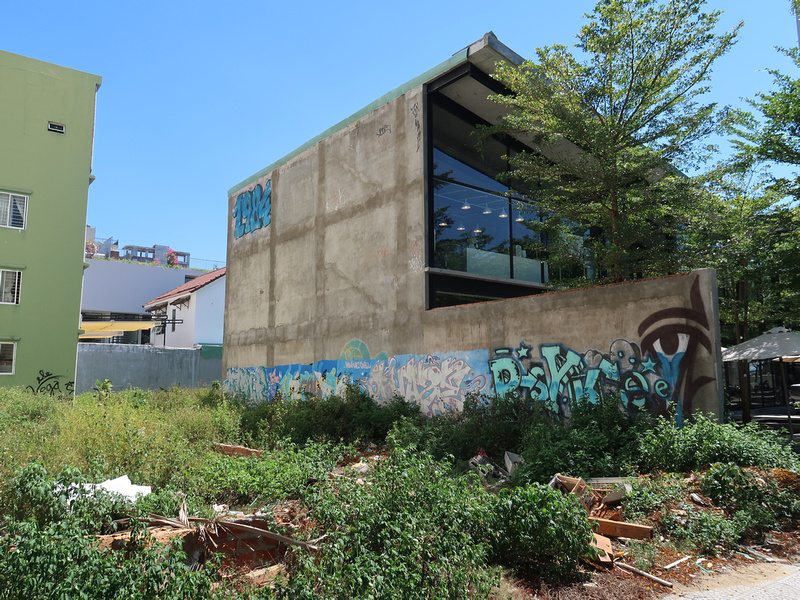 Another good cafe is Drop Cafe. On this street (An Thuong 34) a cluster of monthly apartment rentals and agencies have popped up to accommodate short-term rentals. 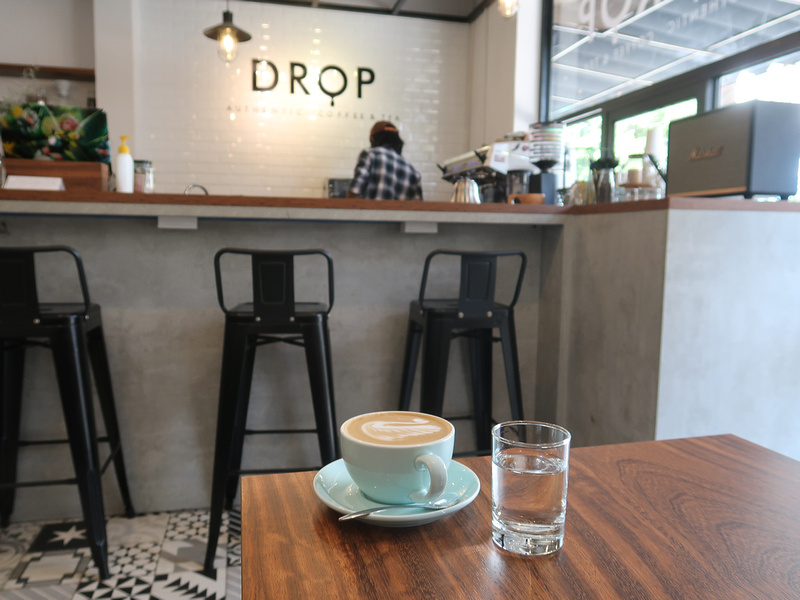 Nearby 43 Factory cafe is Ngo Thi Sy street, which is forming a casual western bar scene. It appears to be getting busier every year, so I wonder if it will turn into a full-on pub street in 10 years.

This area has a different feel to the Northern end of the ward, which has more Korean shops and restaurants. (In 2019 there were 108 flights a week from Seoul to Da Nang.)

I’ve been revisiting this area since 2012, and it’s been interesting to see it evolve from empty sand lots to a neighbourhood that is starting to feel lived-in. 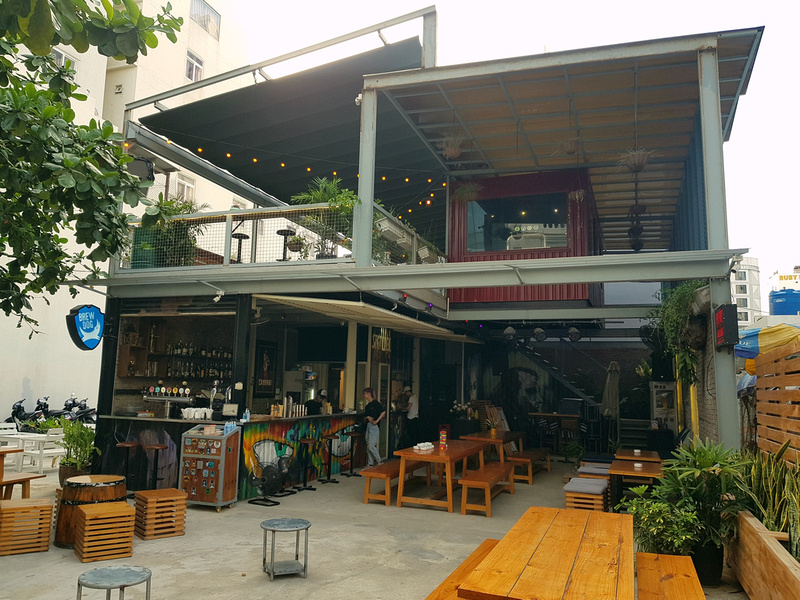 There are now the “thing expats like” places such as craft beer bars and plant-based burger joints (I recommend the jackfruit burger at Roots). 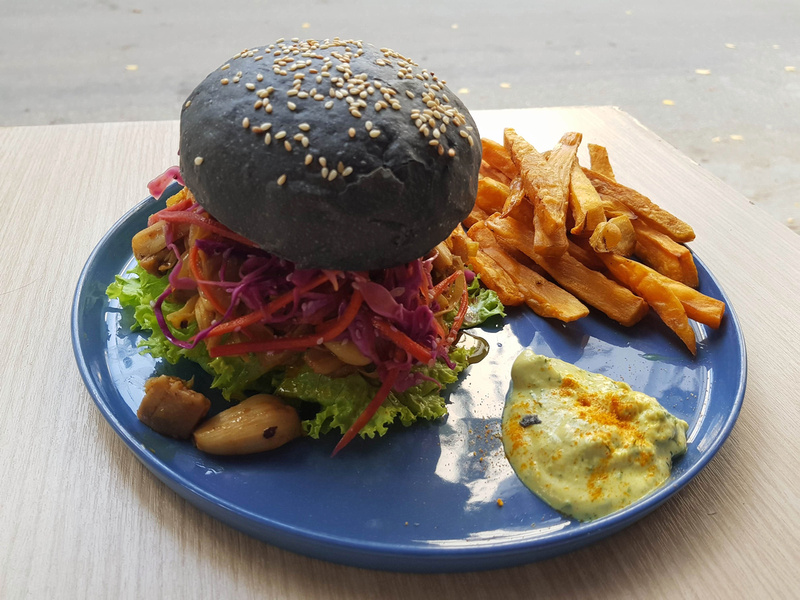 And the American Breakfast is a harbinger of this areas rising popularity with western expats. 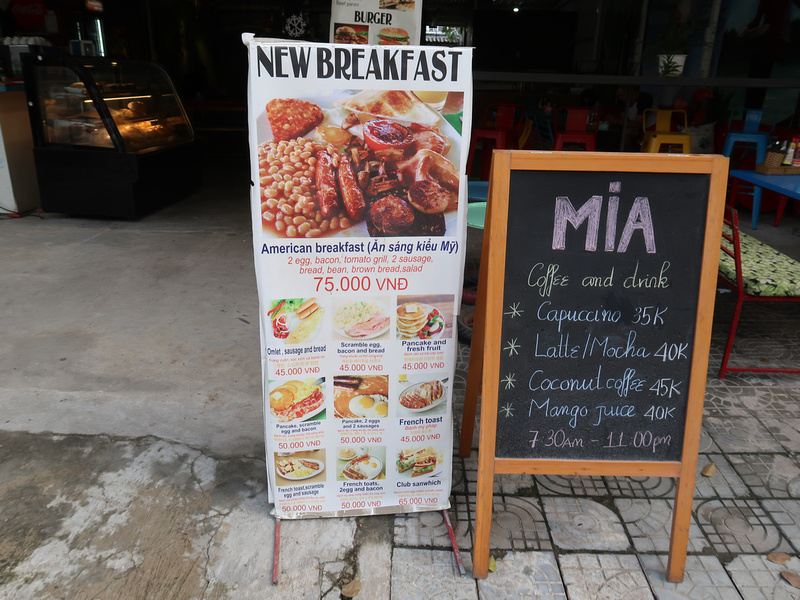 What I like about My An is that it’s gridded out and it’s easy to walk around. It feels like a city neighbourhood, yet you are right next to a world-famous beach (My Khe Beach). 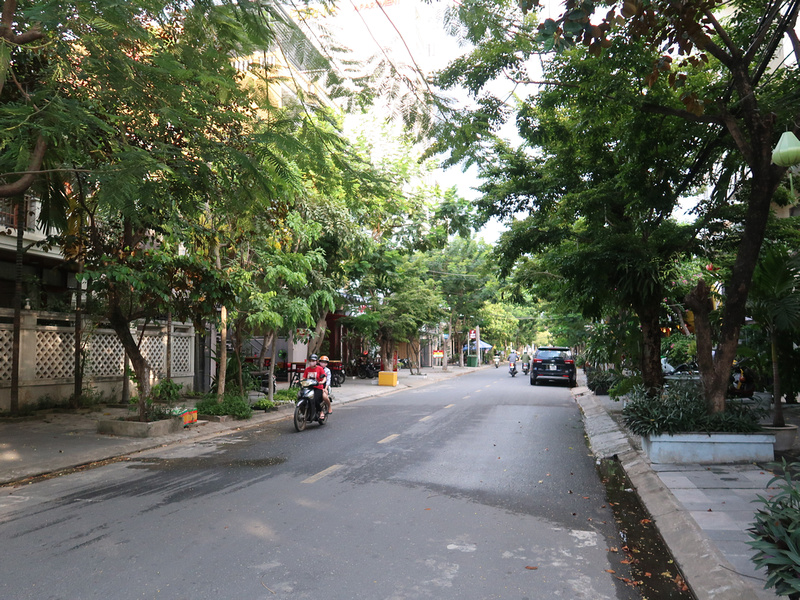 Even if I’m not going to the beach it’s nice to have it within site whenever walking or riding around. 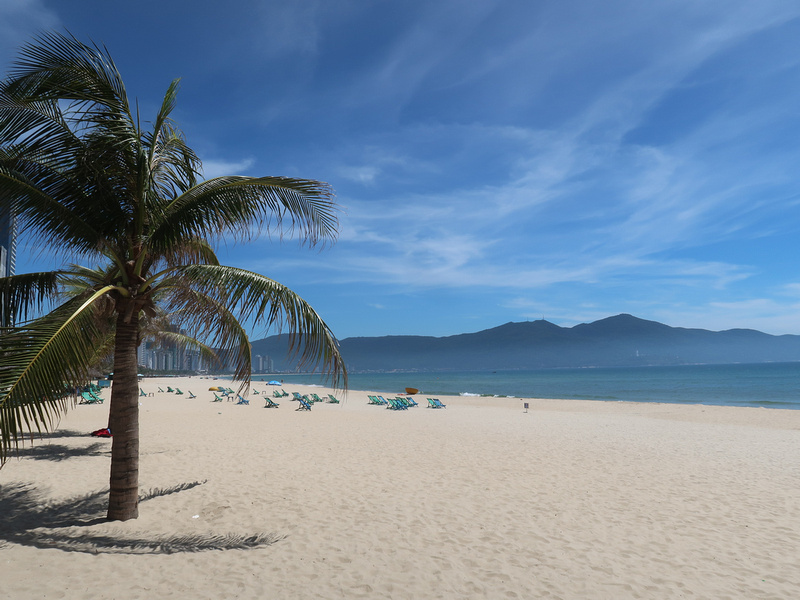 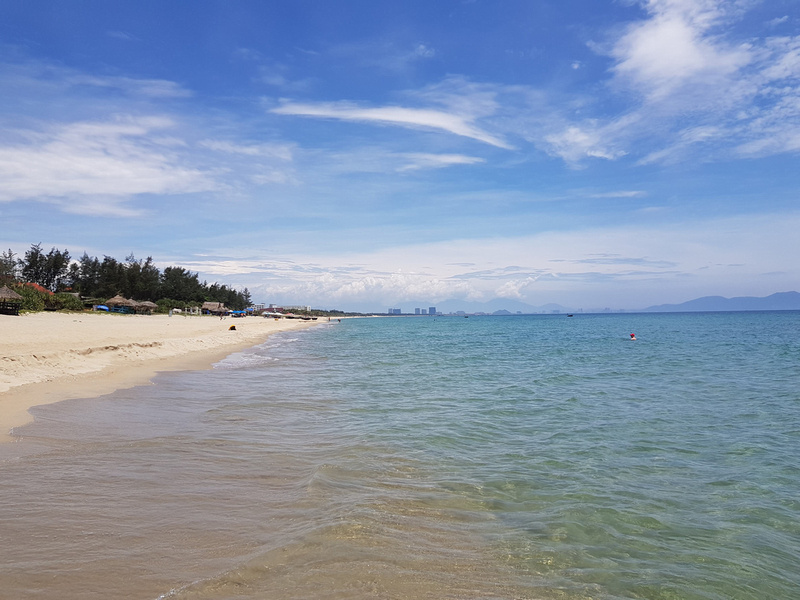 An Bang by comparison is more like a village. There was already a small town here, though it’s now being met by beach developments on either side. At the current rate of development the area between Da Nang and Hoi An is going to be wall-to-wall resorts. An Bang though remains low rise and village-like.

There is a morning market here if you are self catering. 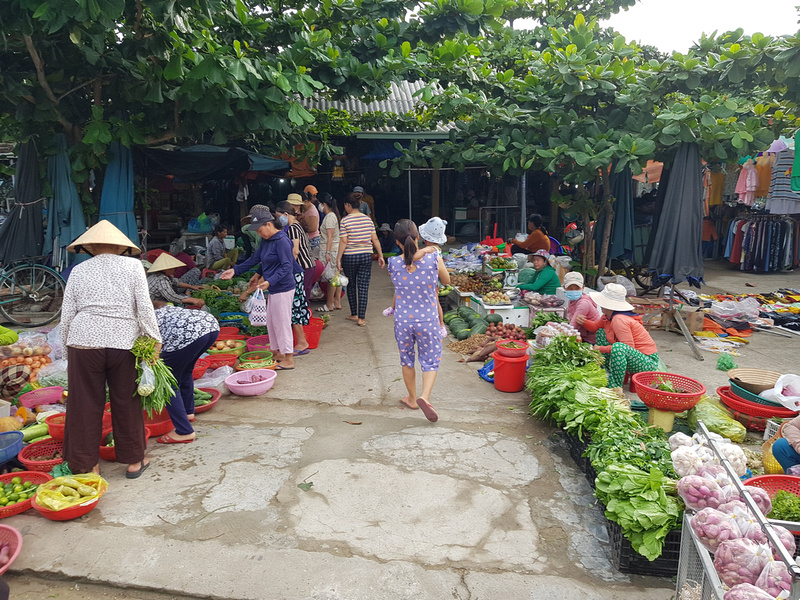 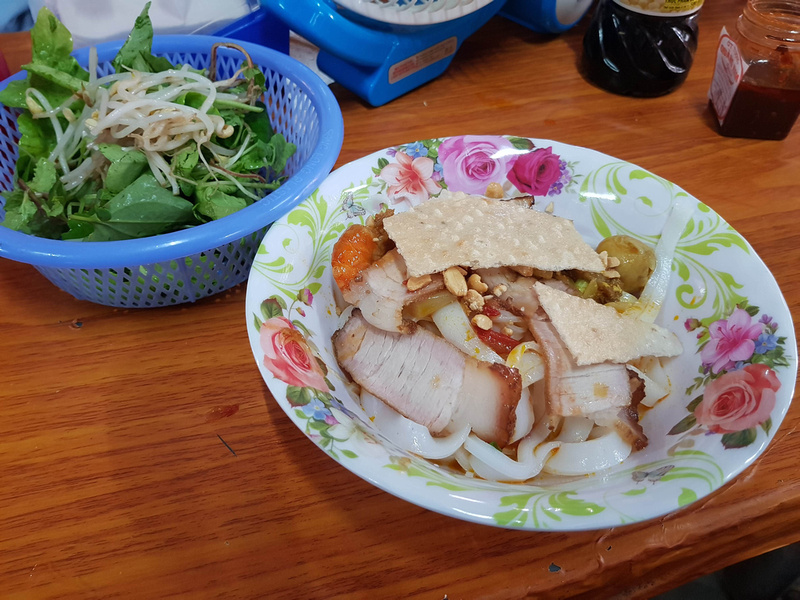 The main road is a mix of local shops and traveller cafes. 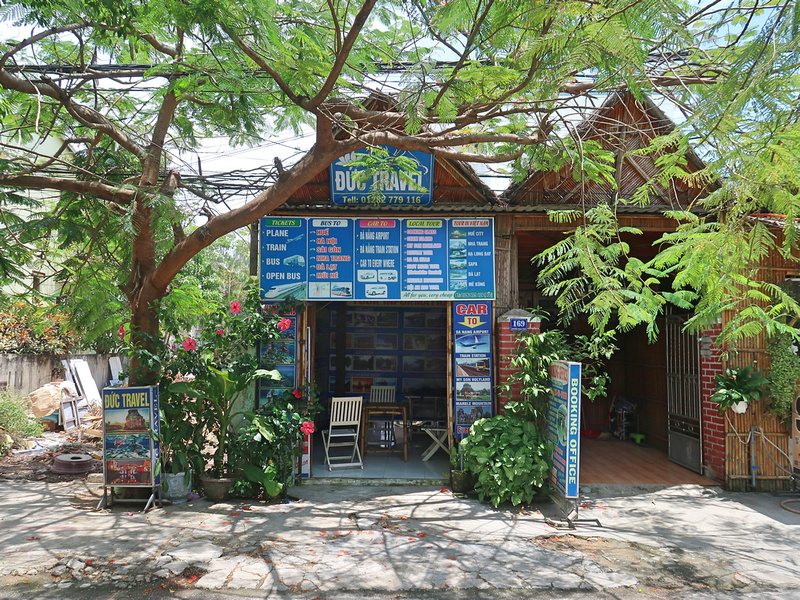 One of the main differences between My An and An Bang is how each area is connected to the beach. The Da Nang beach is separated from the urban area by a major road (Vo Nguyen Giap). In An Bang the main road is smaller, and access to the beach is via little lanes. 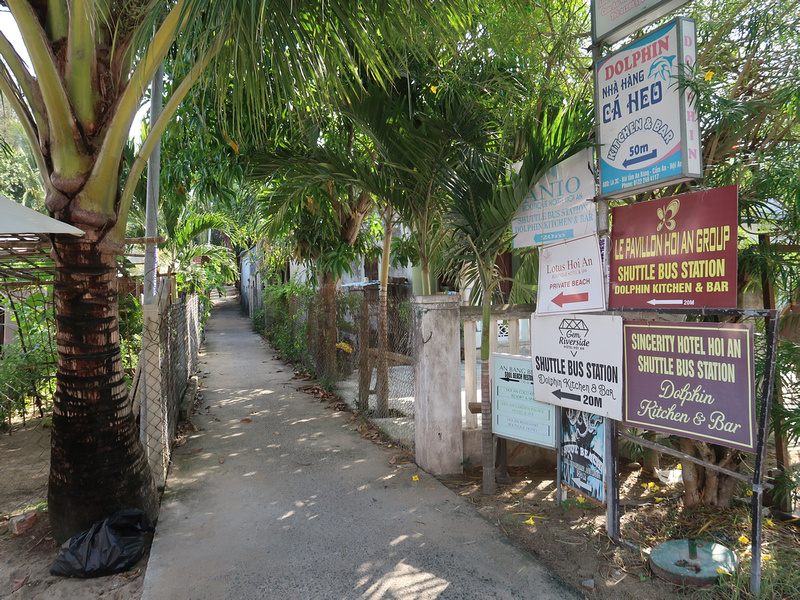 Some lanes you can drive down, while others are walking paths. 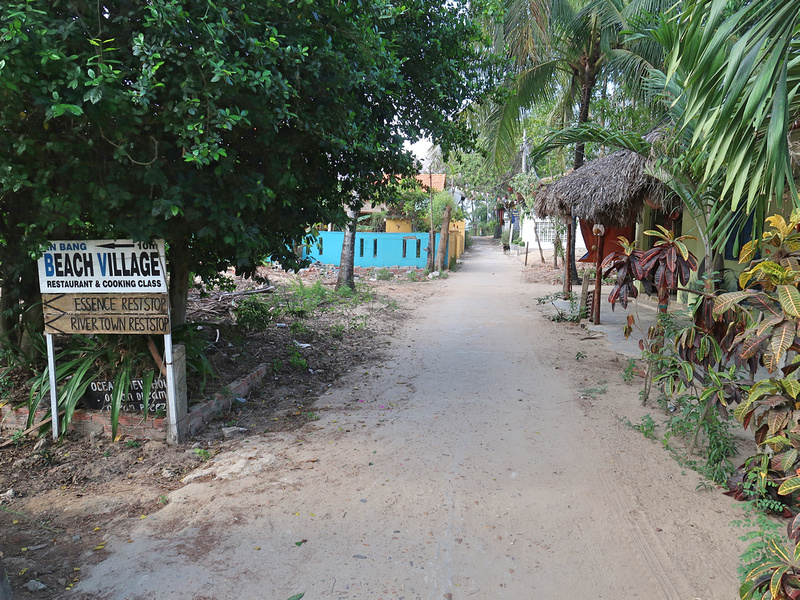 You can’t see the beach from the village, but then there are villas and restaurants that have absolute beachfront views. One of my favourite places is the Deckhouse. 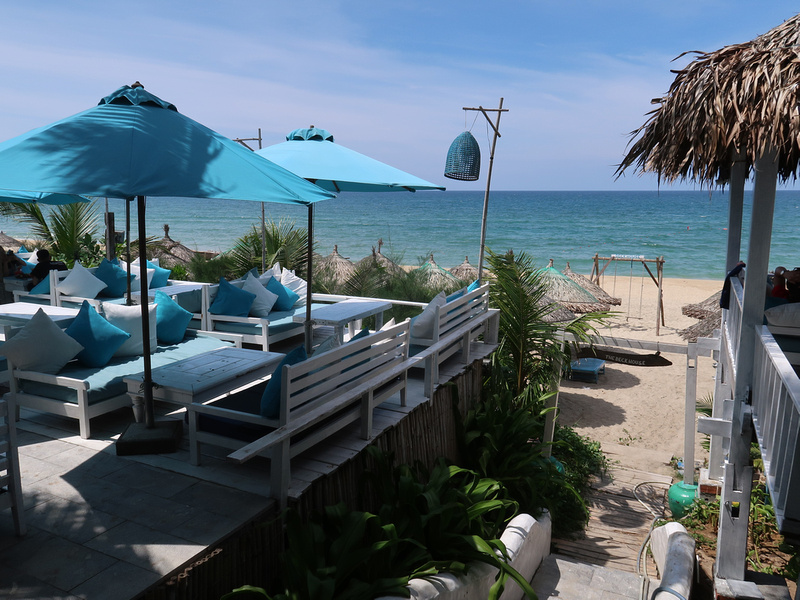 There are many seafood shacks on the beachfront, and by late afternoon the beach is transformed into a street food market. 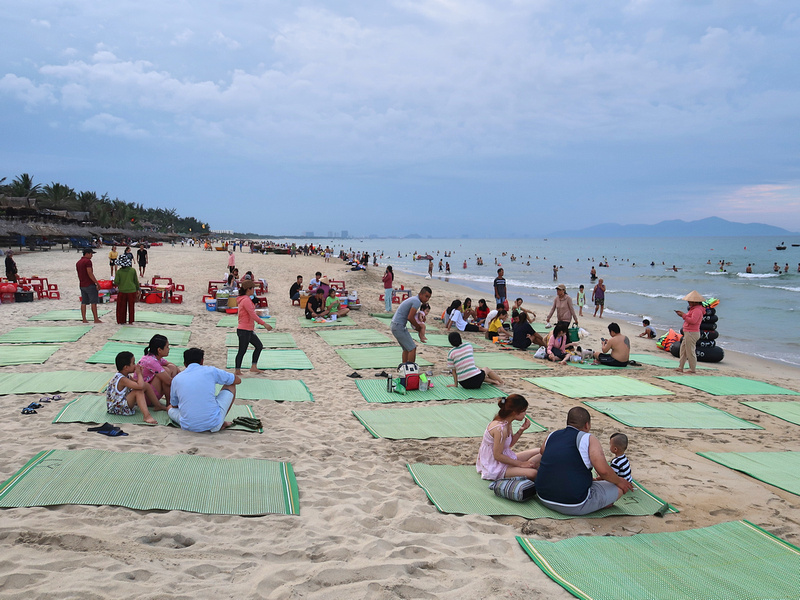 There is not as much to do at night here, though there are some places such as Bungalow Beach Bar and the street near there has some night life. 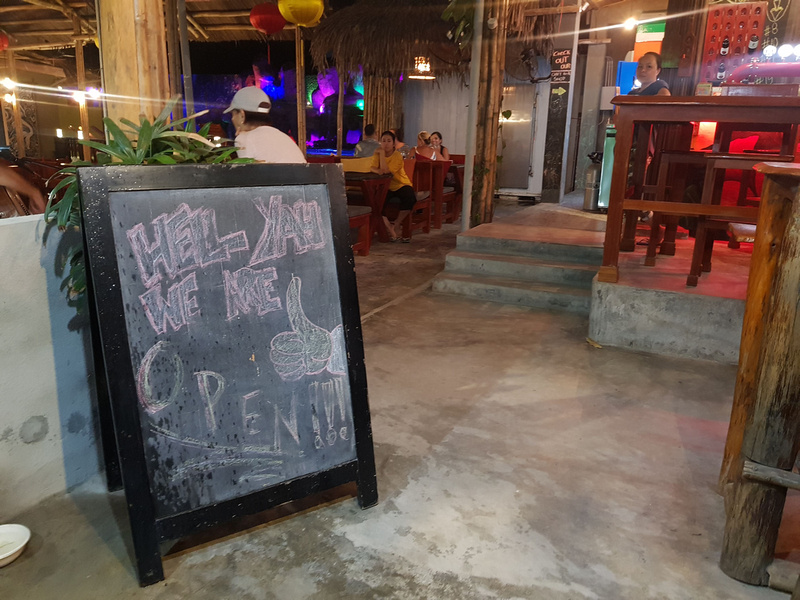 Next to the An Bang village is a big block of land that is being turned into a Holiday Inn resort. 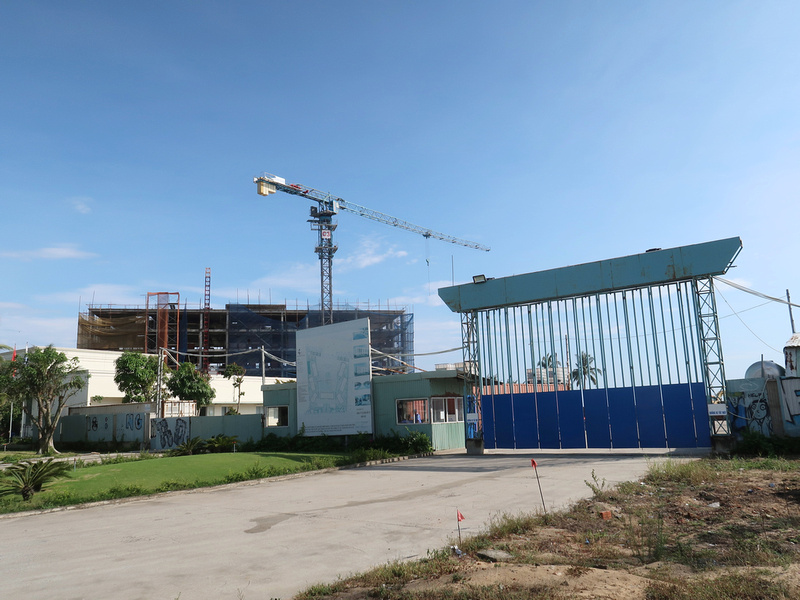 You can see this from the beach – just look for the unfinished castle. 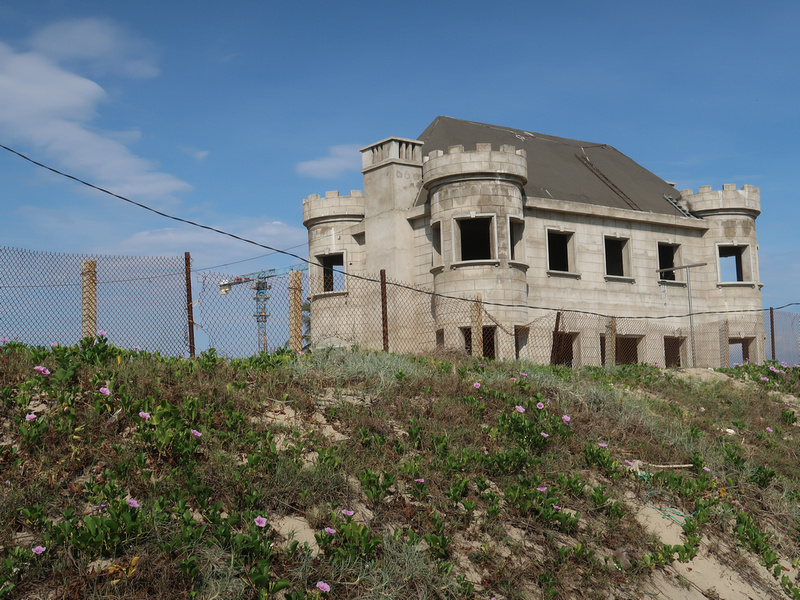 On the other side of this block is Cam An ward, though I noticed some places here marketed themselves as An Bang Beach so I include this area as well. 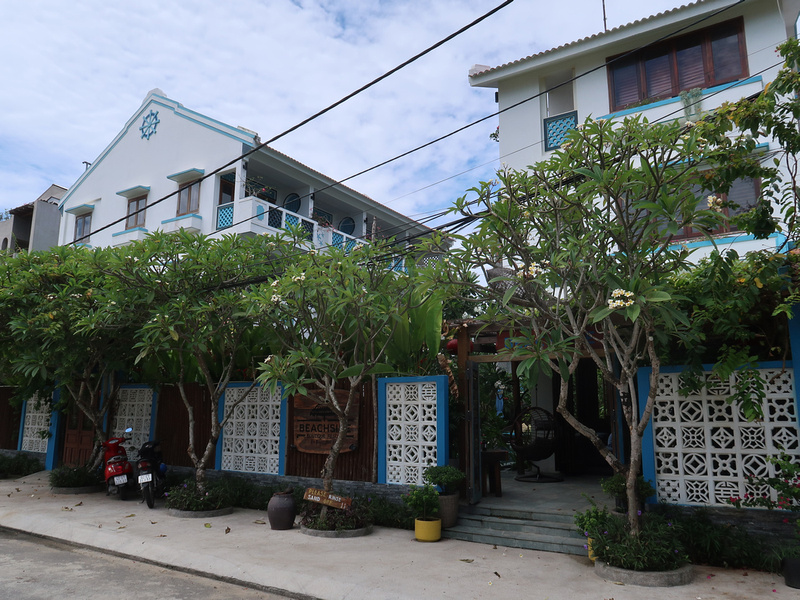 There are some more accommodation options around here, and my favourite cafe in this area is The Sound Of Silence. It doesn’t look big from the front, but it goes all the way back to the beach. 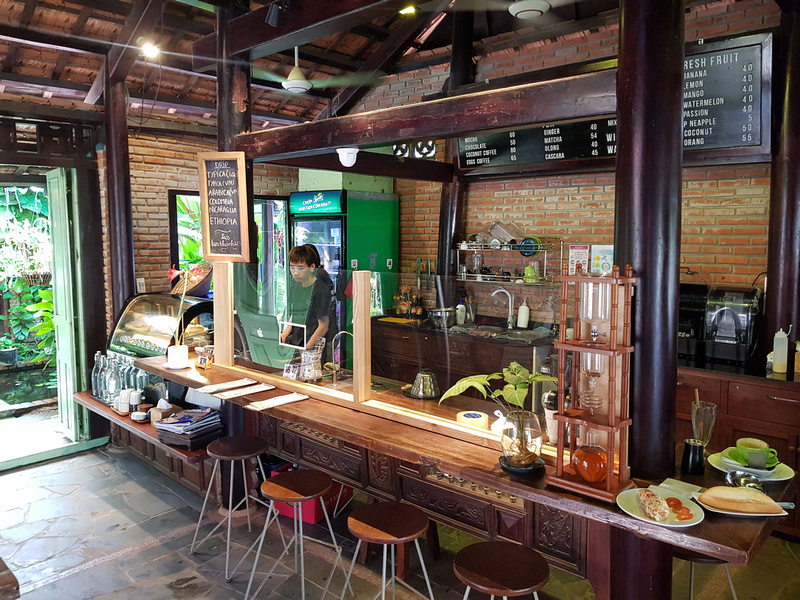 My An or An Bang?

To summarise, My An feels like a city neighbourhood, while An Bang feels like a small town. And both have amazing beaches. 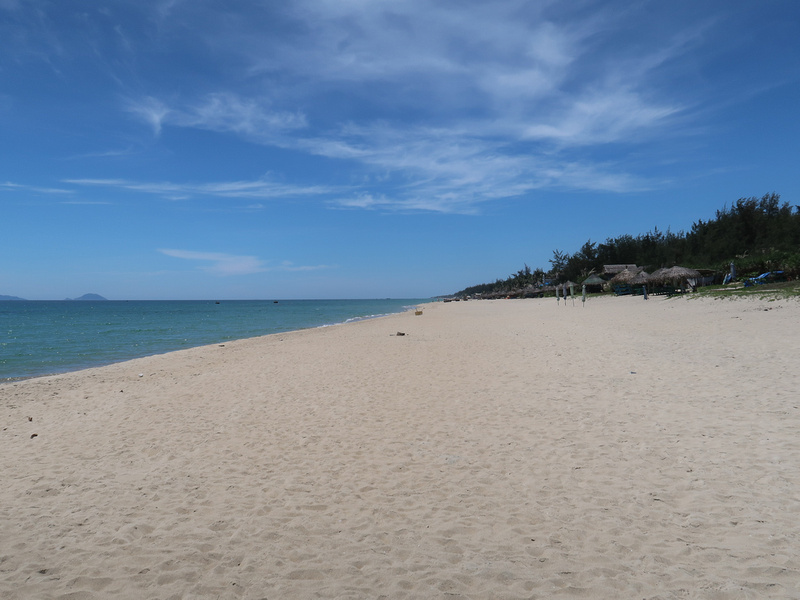 If you have time then I say why not have both and split your time between the two.

I like both places, and if fate decided that I ended up in either place then I wouldn’t be upset. If I was forced to pick (because the internet cruelly demands popularity contests) then I would probably go with My An. I’m more of a city person, so I like having the city side of Da Nang close by. I said on a previous visit that I could live in Da Nang in the future, so perhaps it will be around here. It’s also closer to an international airport, which is a consideration for my lifestyle.

I see the appeal of An Bang as well. It’s just 5km away from the Hoi An old town on a flat and scenic road that is easy to cycle. You can have Hoi An at your doorstep to visit at your leisure.

So if you are a digital nomad looking for a beach lifestyle near urban amenities, then check out the beach neighbourhoods of Da Nang and Hoi An. 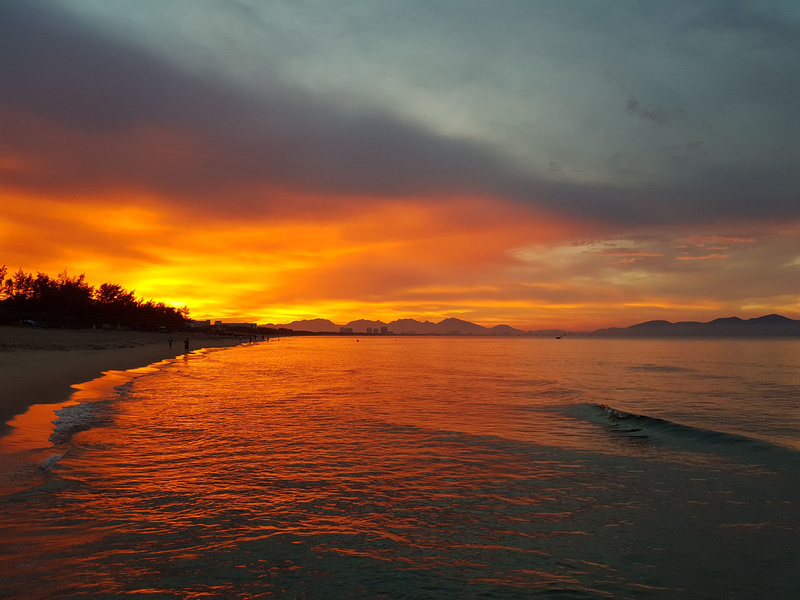 [Sunset at An Bang Beach looking towards Da Nang.]