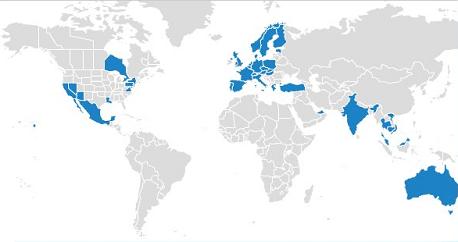 I once spent a weekend in Mexico at Puerto Penasco (Rocky Point), about 60 miles from the US border on the Gulf of California. I went with some friends from Arizona. Rocky Point is a beach resort town and it is the closest beach to Phoenix. I didn’t feel like I was in Mexico (except for those mariachi buskers with oversized hats) and back then you didn’t even need a passport to go there. So when I’m asked if I have been to Mexico I usually say no. I guess you could say I’ve been there, but I haven’t done it.

With these sorts of maps at least they break down the states and territories of the US and Canada. Even so, some of these areas can be vast. The territory of Ontario has been lit up on my map because of a weekend I spent, mostly indoors, at a convention in Toronto.

Another question to ponder is if say you have been to a country when it was known as something else or part of another country.

Serbia is a good recent example of this. In 1991 Serbia was part of Yugoslavia. Since then Yugoslavia gradually split up to become Croatia, Slovenia, Albania, Bosnia and Herzegovina, and the Republic of Macedonia, leaving just Serbia and Montenegro in 2003.

In 2006 Montenegro voted to end its union with Serbia and become a separate country, thus adding another nation to the world tally.

If you are on a quest to visit every country in the world and you ticked off Yugoslavia before 1991, you now have to come back and visit 7 countries, or 8 if you count Kosovo.