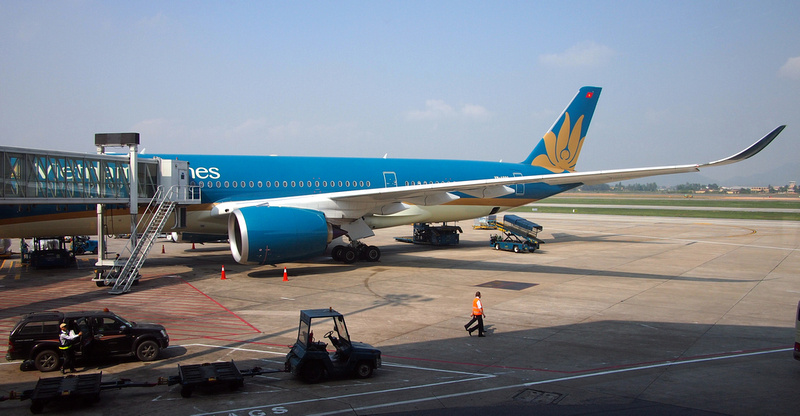 Wherever I travel I read the local news to get a feel of what’s going on in the land. While you’re not going to get hard-hitting political analysis from state-controlled media, it’s good for finding out about current affairs and development news. And then there are those amusing or unusual stories that you wouldn’t see in Australia, like wild elephants ravaging crops.

In Vietnam I’m subscribed to the major local news sites which I skim the headlines for items of interest. One headline that caught my attention was “Cuba, Vietnam Sign Significant Trade Agreements”.

Intrigued, I clicked through. It said:

“…the Saigon Tourism Corporation and the entity in charge of cooperation for the development of bidirectional tourism between Vietnam and Cuba, established an agreement in order to strengthen the cooperation between both nations in the leisure industry.”

What does this statement about the leisure industry actually mean? Are they going to just put more travel brochures in each others travel agencies, or will they one day consider direct flights?

My mind wouldn’t let this go, partly because it would be amazing to have a direct flight from a Southeast Asian nation to Cuba. I got to wondering how far is Ho Chi Minh City to Havana, and could there ever be direct flights to stimulate the “development of bidirectional tourism between Vietnam and Cuba”? 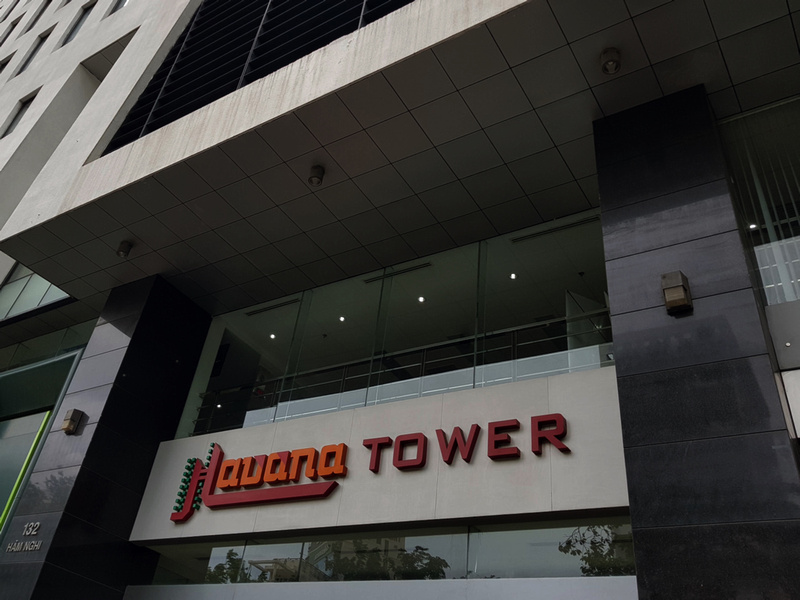 For such flight questions I break out the Great Circle Mapper. According to GCmap, the distance between SGN-HAV is 16,138 km. 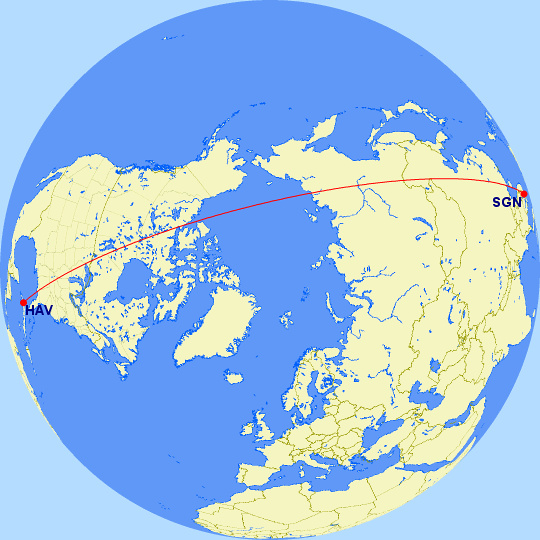 For perspective, Singapore Airlines is about to recommence its Singapore – New York service, which will be the world’s longest flight at 15,348 km. So it’s safe to say that there would never be non-stop flights between Vietnam and Cuba. 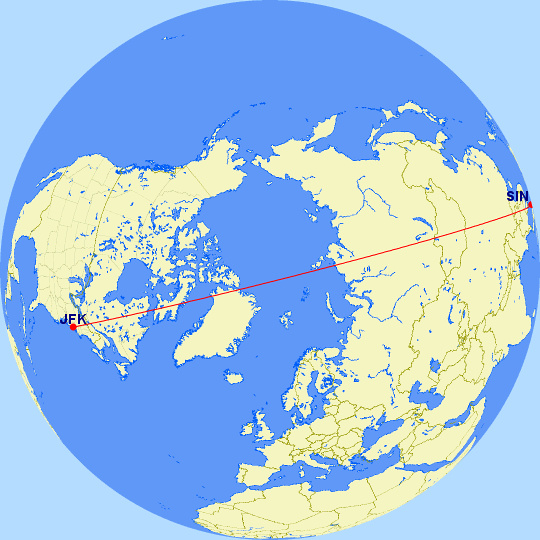 I tried Hanoi to Havana and the direct distance is 15033 km, which is still too far for a commercially viable non-stop flight. So what flight options would there be with stops? While I was looking at the SGN-HAV route it appeared to travel near Beijing. In fact according to the mapper it flies directly overhead with no change in the km distance. 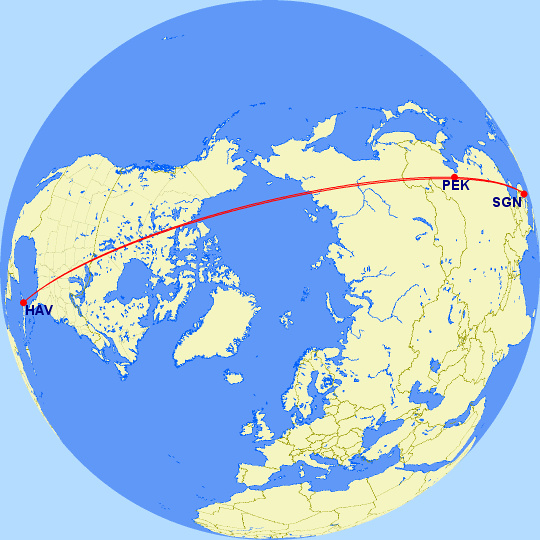 The problem with this option is that there is already a flight from Beijing to Havana (via Montreal). Air China is the only airline offering a direct flight from Cuba to Asia. I’m guessing that China wouldn’t be cool with another airline taking its traffic. Plus Air China would rely on Canadian holiday-makers to fill the flight from Montreal. There would probably be little demand for China-Havana flights.

So what other stopover options are there. For this exercise I’ve used Hanoi, even though it would please me to see Havana on the departure board at Tan Son Nhat International Airport.

I’ve narrowed it down to three stopover options. The first would be via East Asia, with Tokyo or Seoul being the leading contenders. For this illustration I’ve picked Tokyo, because Hanoi-Haneda-Havana is alliteratively appealing. 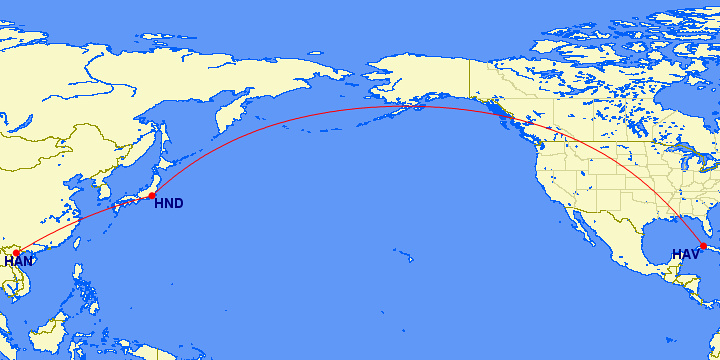 The second option would be via Europe, which is only slightly longer. A Hanoi – Paris – Havana flight totals 16,929 km. If you do a search for flights from Hanoi to Havana you can get there in two flights via Moscow or Paris. 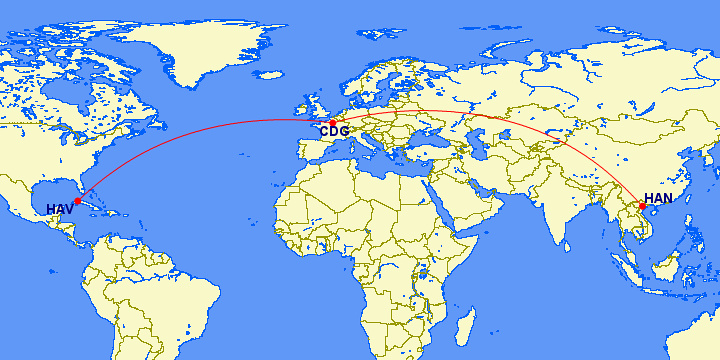 The third option would be flying via Canada. Vancouver would be the logical stop, being the Canadian gateway to Asia. 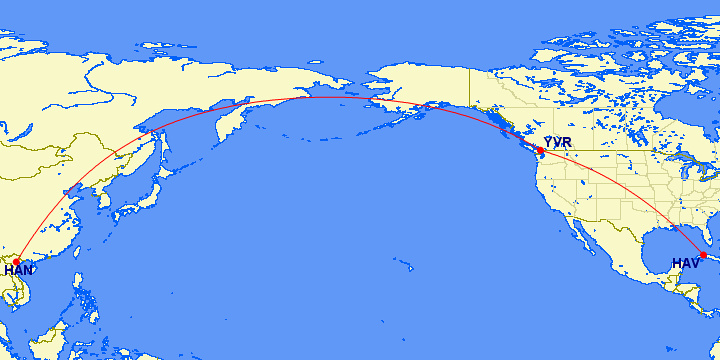 Out of these options, Tokyo would be better served as a stop for a future Ho Chi Minh City – New York flight. For the Europe option it’s already a competitive market for flights to Cuba from Europe, which would make the second leg harder to fill. So the Vancouver option would be the best option.

These routes would be flown by Vietnam Airlines, as Cubana de Aviación is not in a position to fly such routes. Vietnam Airlines are in the process of preparing for direct North American flights. They were one of the first airlines to operate both the A350 and 787, and they are getting certified by the US Federal Aviation Administration (FAA) to fly into the US.

Specific destinations haven’t been announced yet, though Ho Chi Minh City – Los Angeles is the leading choice given the huge Vietnamese diaspora in Southern California. Other North American destinations that have been proposed include San Francisco, Washington DC, Vancouver, Houston, and Seattle.

If Vancouver does become a Vietnam Airlines destination, then from there they could extend the flight to Havana. There wouldn’t be enough demand purely from Vietnamese and Cuban passengers to make the route work, which is why I think going via Vancouver is the best option. Cuba is a popular tourist destination for Canadians, and at the time of this post there are no flights from Vancouver to Havana. It would then up to Vietnam Airlines to establish a successful North American marketing department that could sell these flights to the Canadian leisure market.

Getting Vietnam to North America flights established is the first step. Vietnam Airlines have said that their first route will take years to be profitable. The dream of a Hanoi (or Ho Chi Minh City) to Havana might be a long way off, but looking at the Wiki page for José Martí International Airport there is a flight from Luanda with TAAG Angola Airlines to Havana, so why not one day Hanoi.