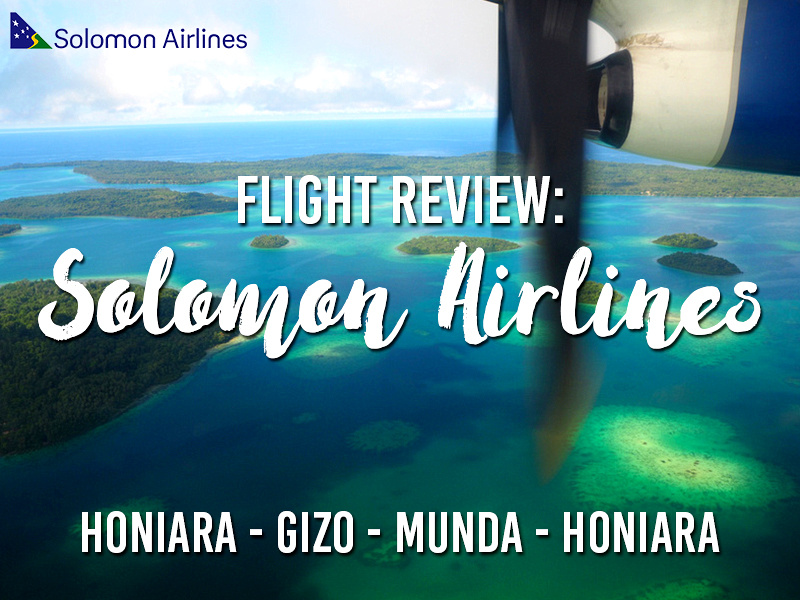 Solomon Islands is a nation of over 900 islands stretching about 1,500 kilometres across the South Pacific. Being an island nation, domestic air travel plays a big part in national transport. Unlike Indonesia or the Philippines though, there is a small population spread out across the islands. With a population of about 600,000 people (and 85,000 of those people in Honiara), domestic flights are irregular and operated by small aircraft.

Solomon Airlines has a single Airbus A320-200 which is used for flights to Brisbane and other international flights. Domestic flights are operated with Twin Otter and Dash 8-100 aircraft (propeller aircraft). Having become so accustomed to the uniformity of flying A320/737’s, I was happy to change things up with some turboprop travel.

Some of the destinations are too small to have a dedicated route, so they are included in a multi-stop route. Our flight to Munda was via Gizo. This is a triangular route that flies Honiara – Gizo – Munda – Honiara.

We arrived at the charming little domestic terminal about half an hour before the flight. 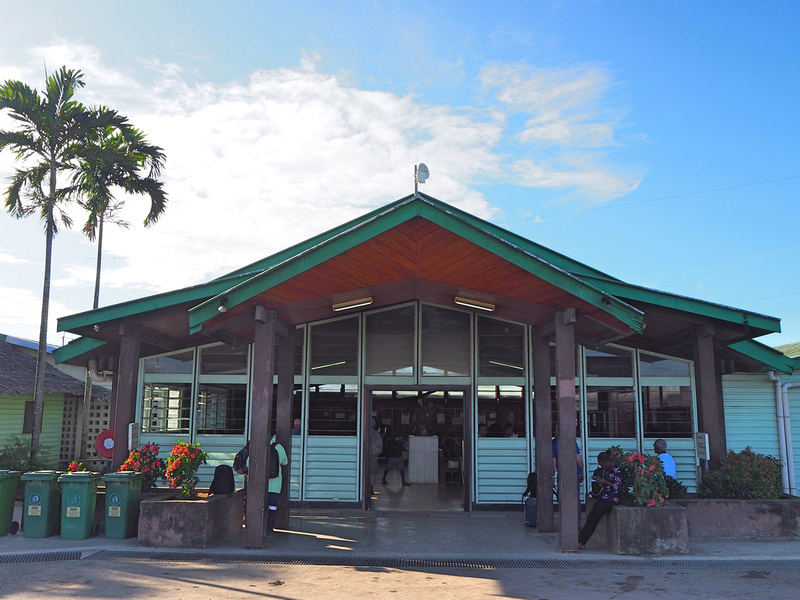 There is no airside waiting lounge here, as you just walk out from the terminal to the plane. 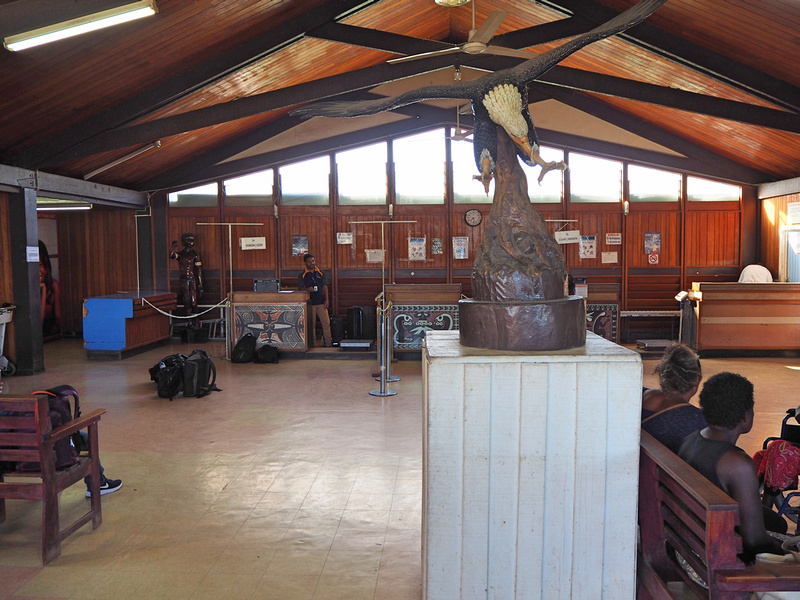 I felt extra blessed to be flying with nuns. 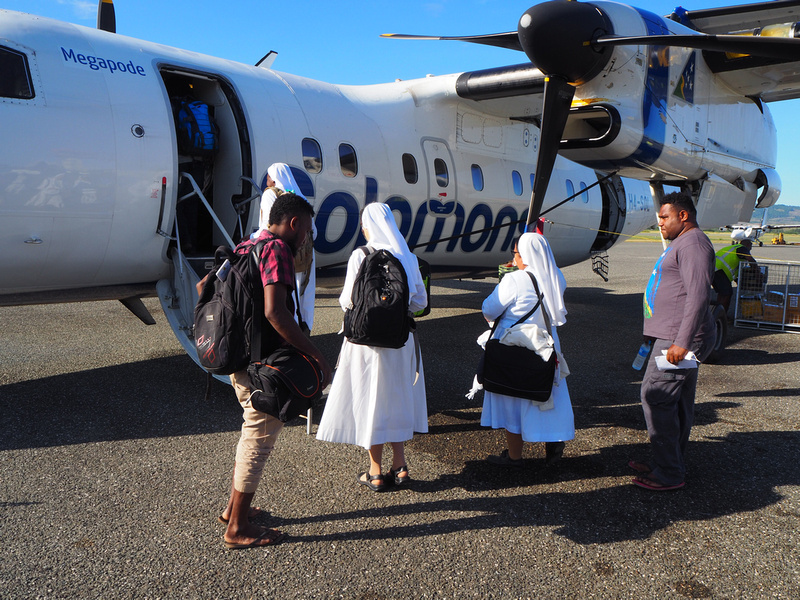 A view of the Honiara Airport before taking off. 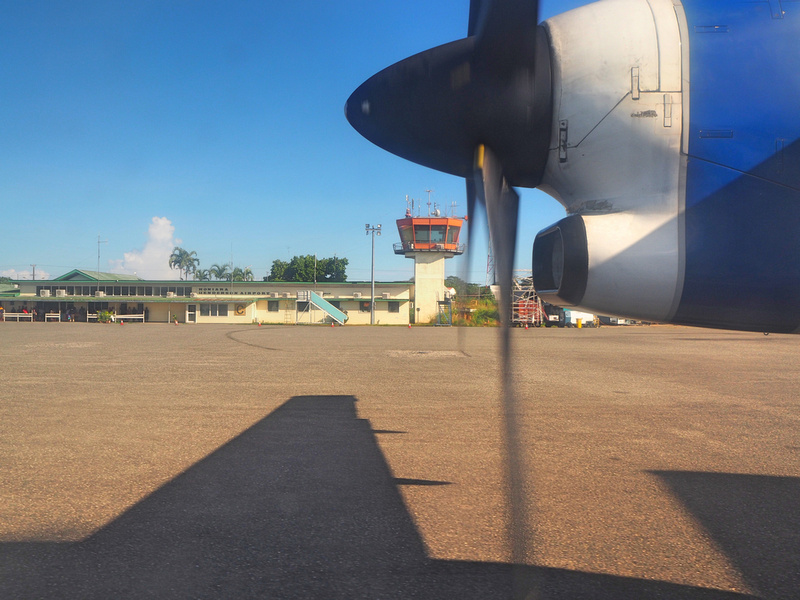 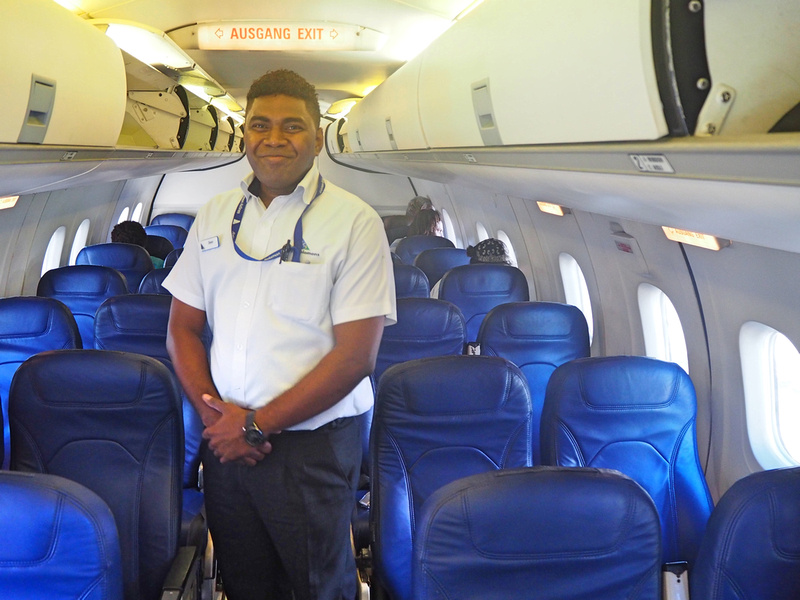 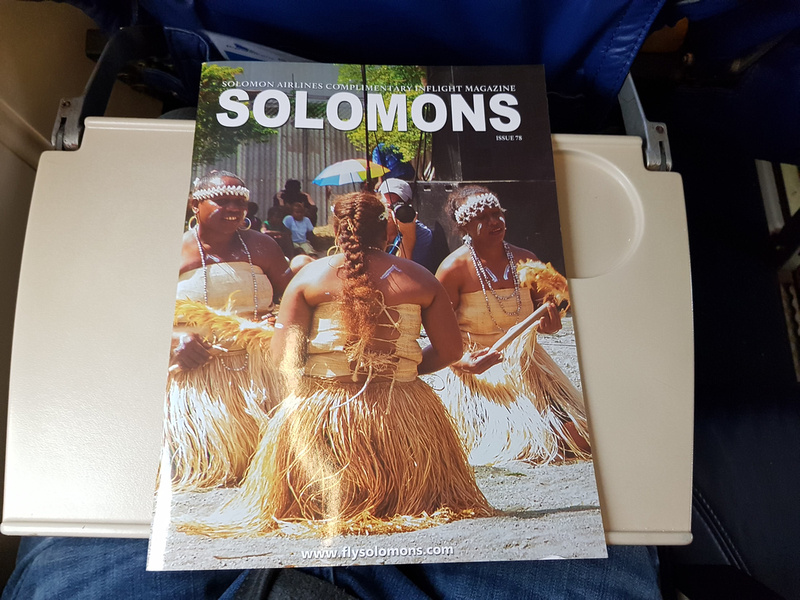 The Dash 8 seats 4 across, so make sure you ask for a window seat because the views are amazing. 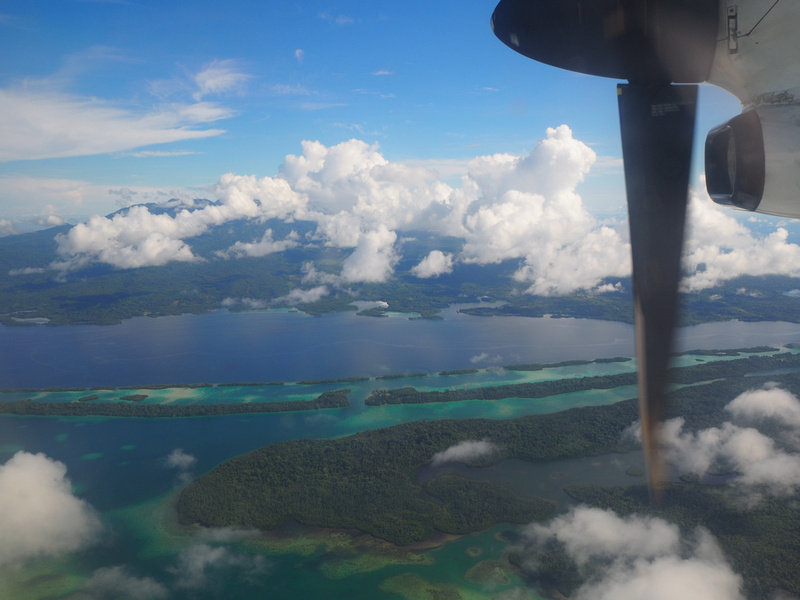 Drinks and snacks are served on the leg from Honiara to Gizo. 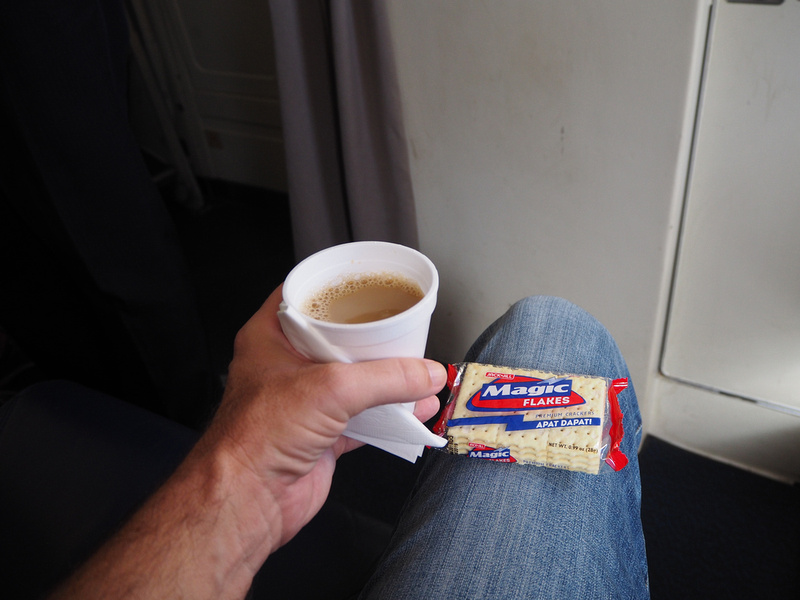 I spent most of the flight looking out of the window in awe of the little islands and coral reefs. 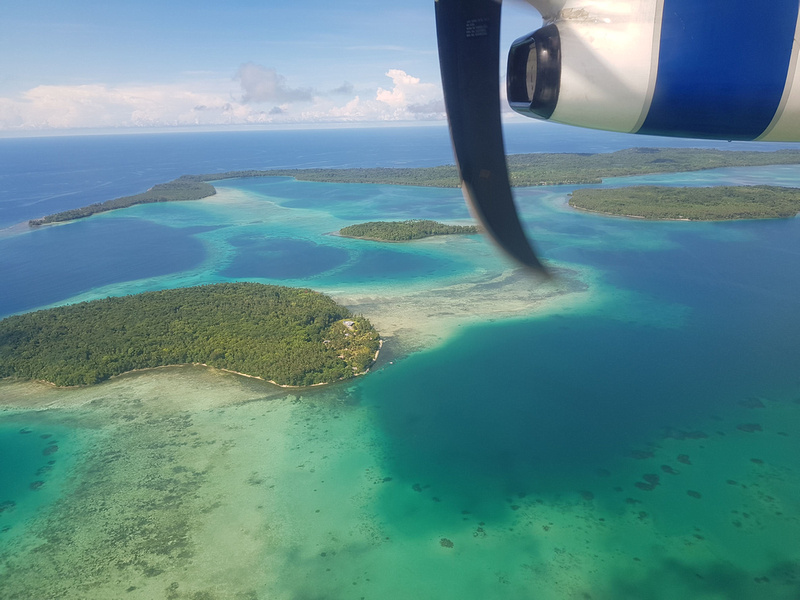 The flight to Gizo is flight IE 800. The flight stops at Nusatupe Gizo Airport just long enough to drop off and pick up passengers, and you stay onboard during this time. From Gizo the flight becomes IE 801. 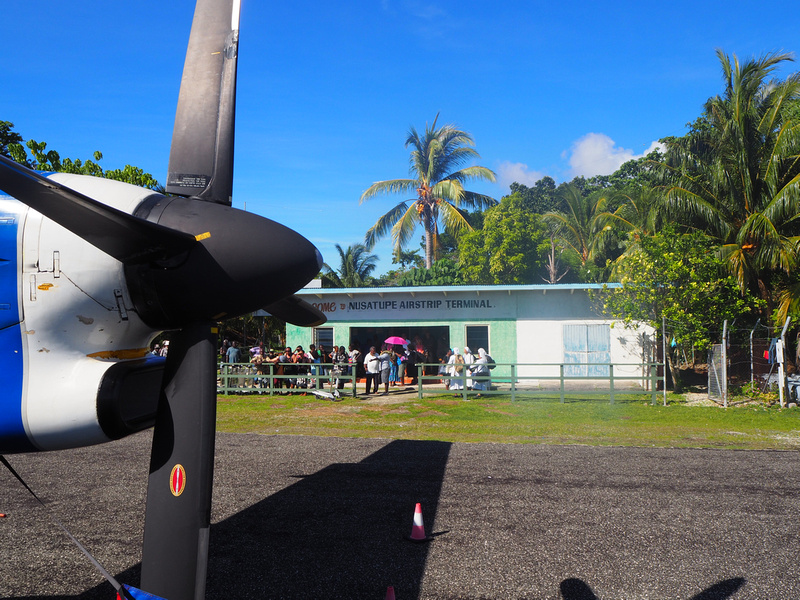 Taking off at Nusatupe Gizo Airport. 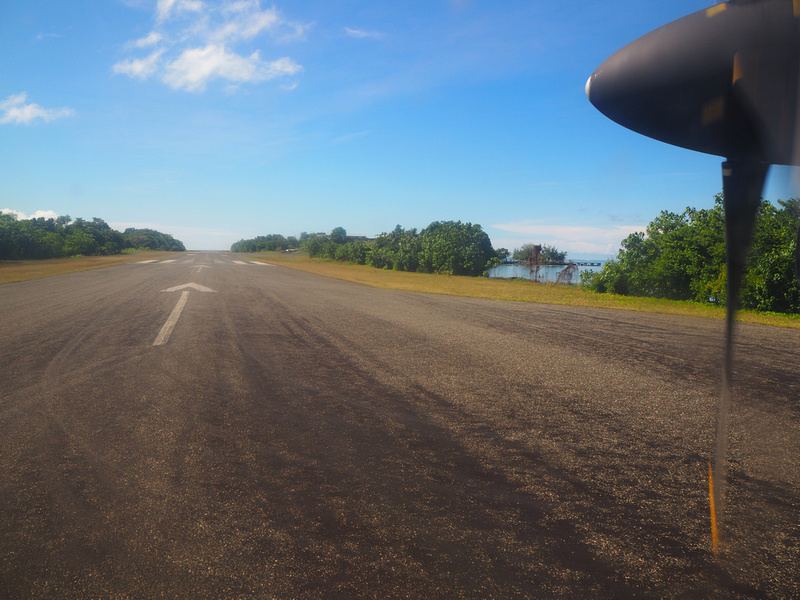 The flight from Gizo to Munda takes 10 minutes to travel the 51 kilometres. It’s the shortest commercial flight I’ve been on, but it doesn’t even rank in the top 10 shortest flights in the world.

It’s also one of the most scenic flights I’ve ever been on. 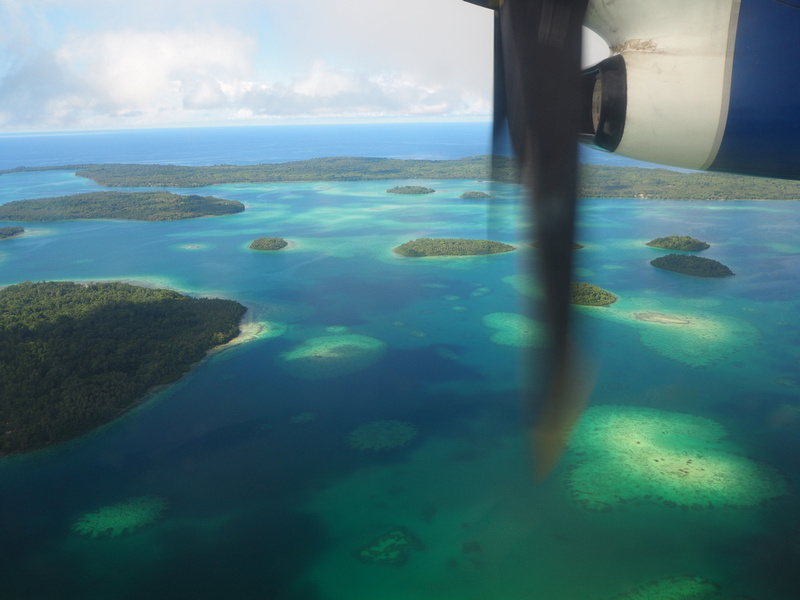 Our plane at Munda Airport, which also has a short stop before continuing back to Honiara. 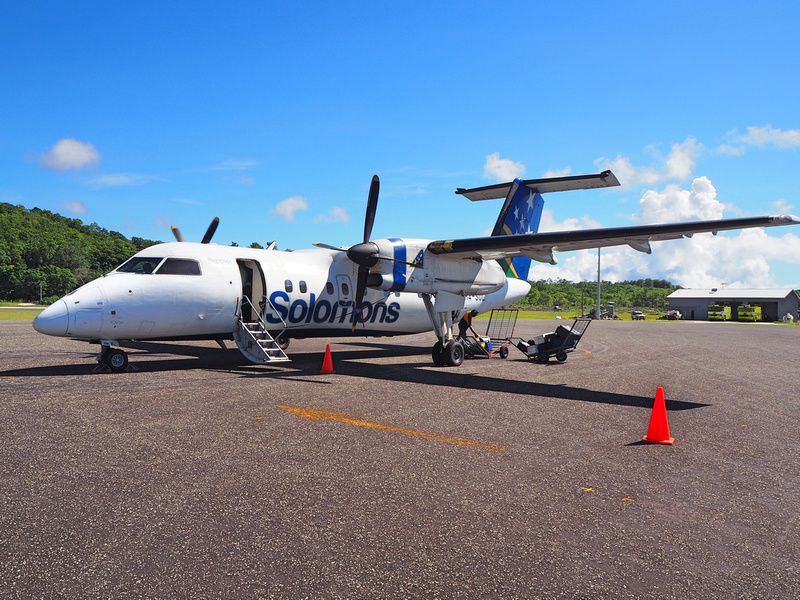 Baggage claim at Munda is a man with a trolley. 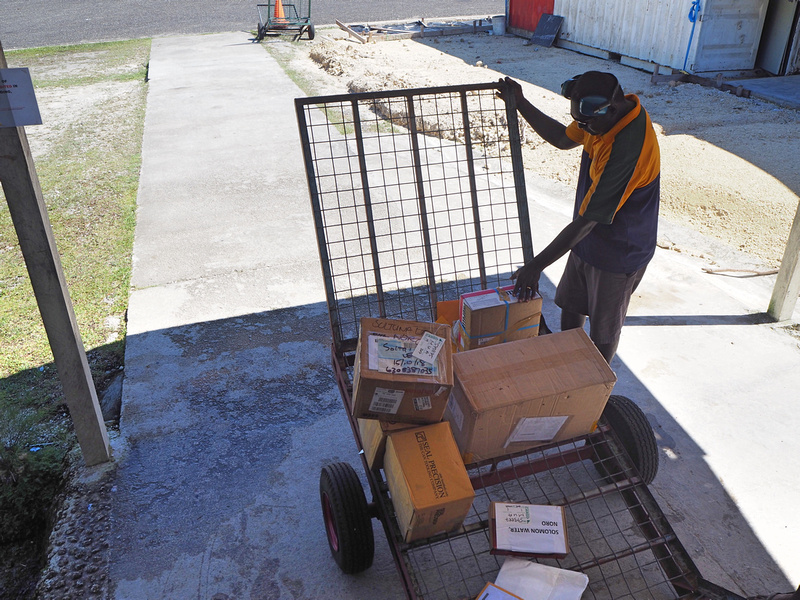 Munda Airport is in the town of Munda, like right in the town. The terminal building looks like someones house. 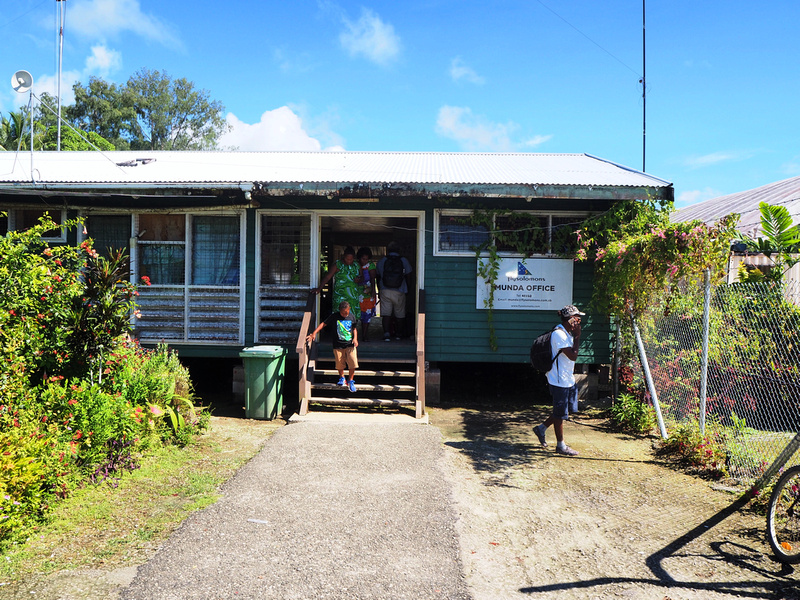 For our return trip to Honiara we had island-hopped from Munda to Gizo. This meant that we got to experience the 10-minute flight from Gizo to Munda again as well as having a look at Gizo Airport, which is an experience in itself.

Nusatupe Airport (the airport that serves Gizo) is an island that has been formed from two separate islands to make a runway. 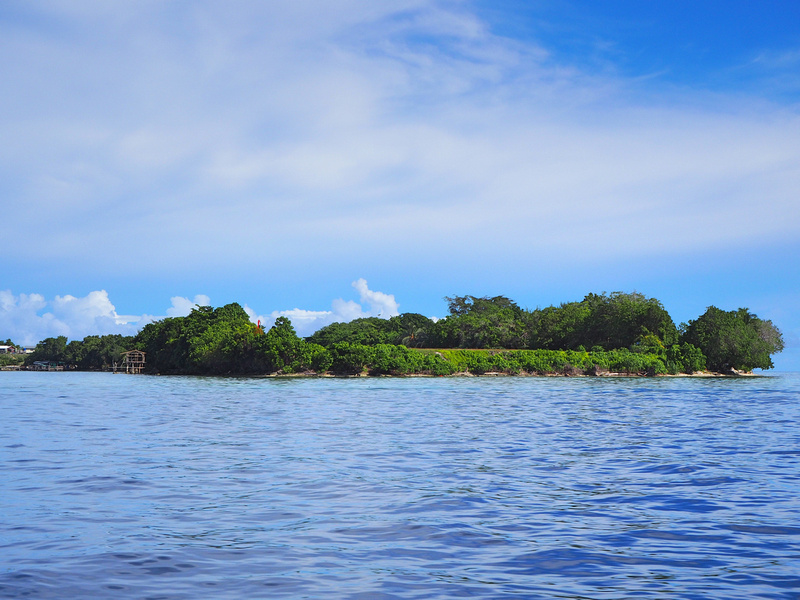 Of course the only way to get there is by boat. There are shuttle services to and from Gizo that meet each flight, and nearby island resorts also organise boats to and from the airport. We were coming from Fatboys Resort, which is about 10 minutes away by boat. This was possibly the coolest airport transfer I’ve ever done. 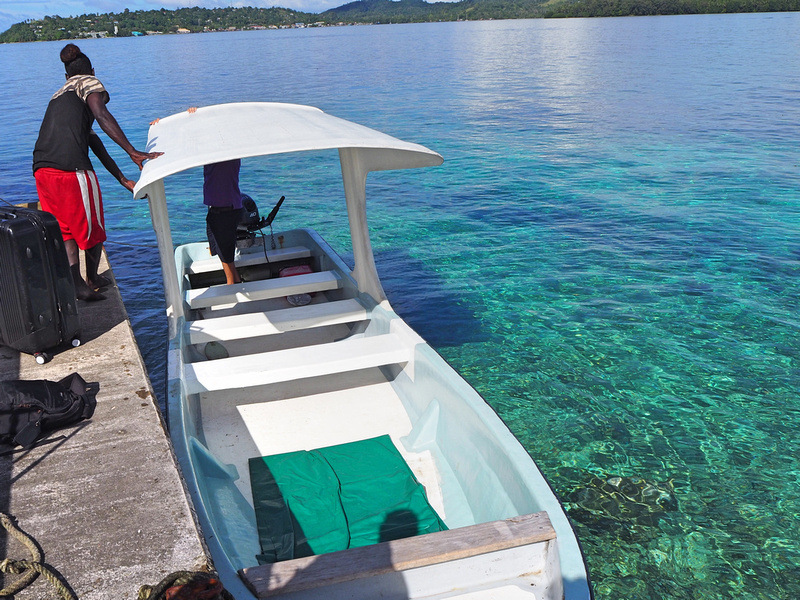 There is a little airport terminal, alongside drums of aviation fuel. 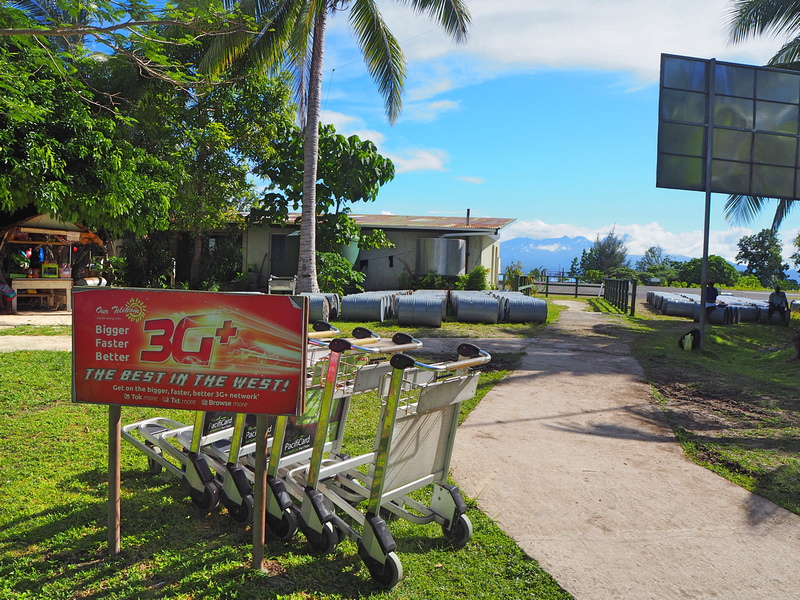 The bag trolley loaded up, ready for a swift loading. 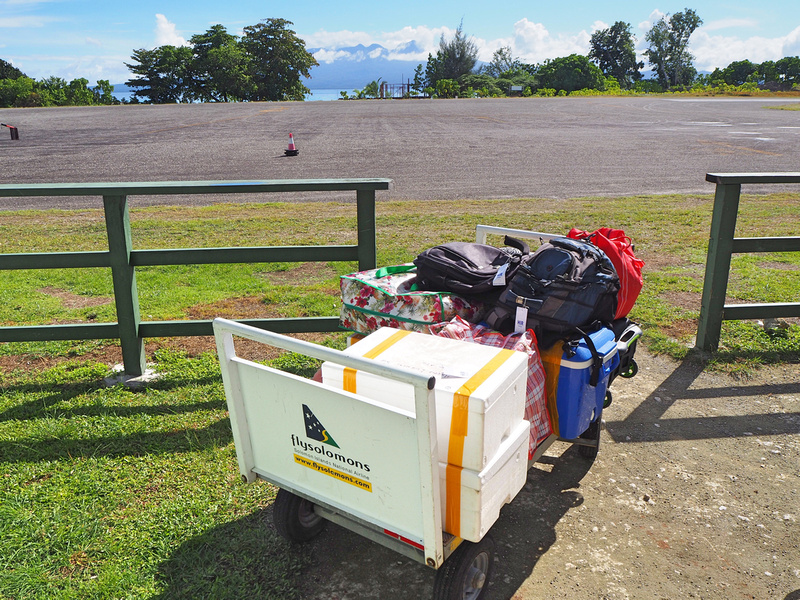 No need to arrive here an hour before the flight. Even half an hour was a bit generous for time, as there is not much to do at the airport. 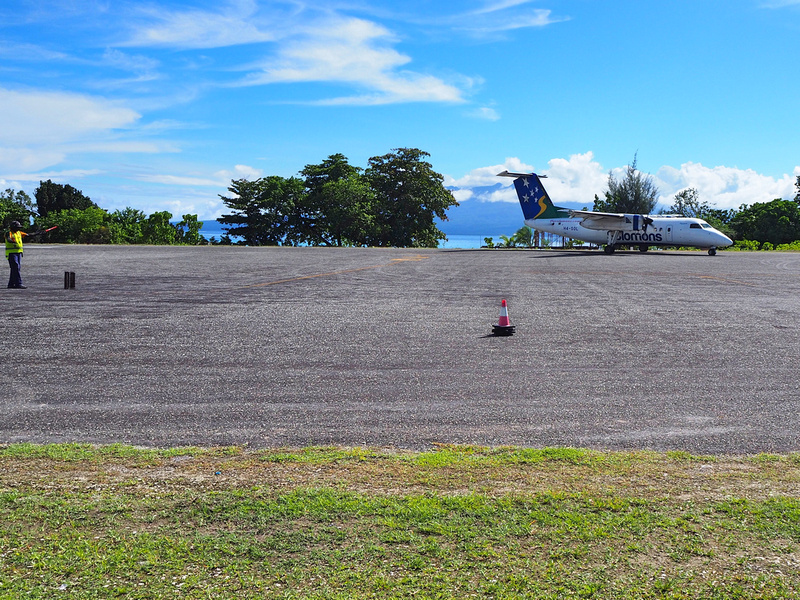 The plane stops for just long enough to drop off and pick up passengers. 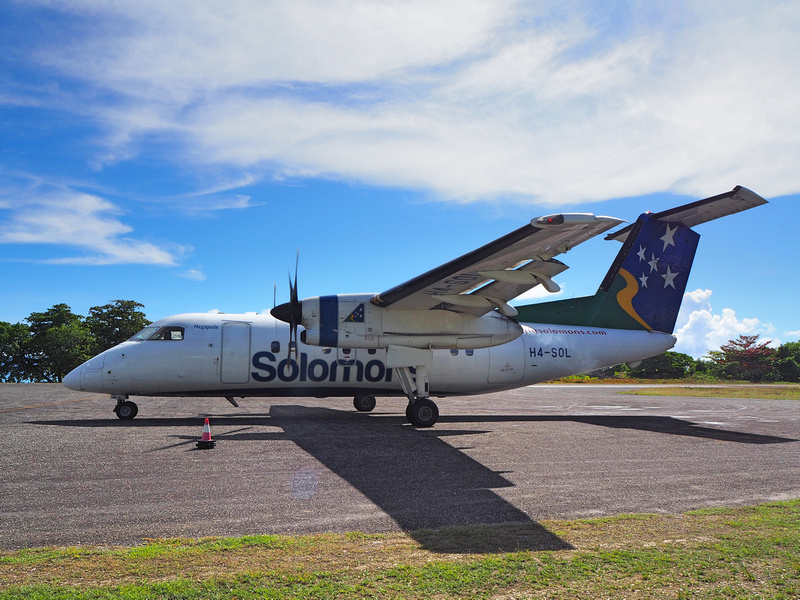 And off we go for our 10 minute flight to Munda. I was amazed to see how many little islands had houses on them. People are out there living the island life. 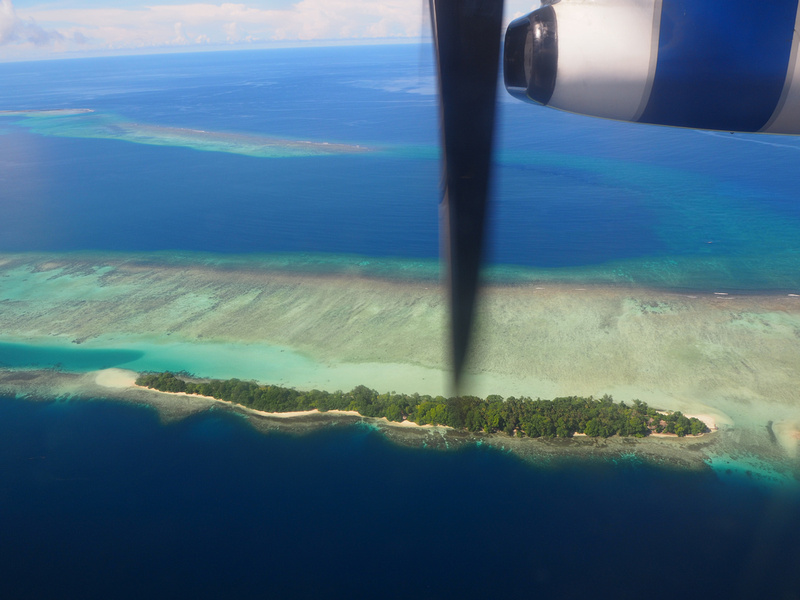 After picking up passengers in Munda it was on to Honiara again. This segment takes about 45 minutes, so enough time for a drink and a snack to be served. 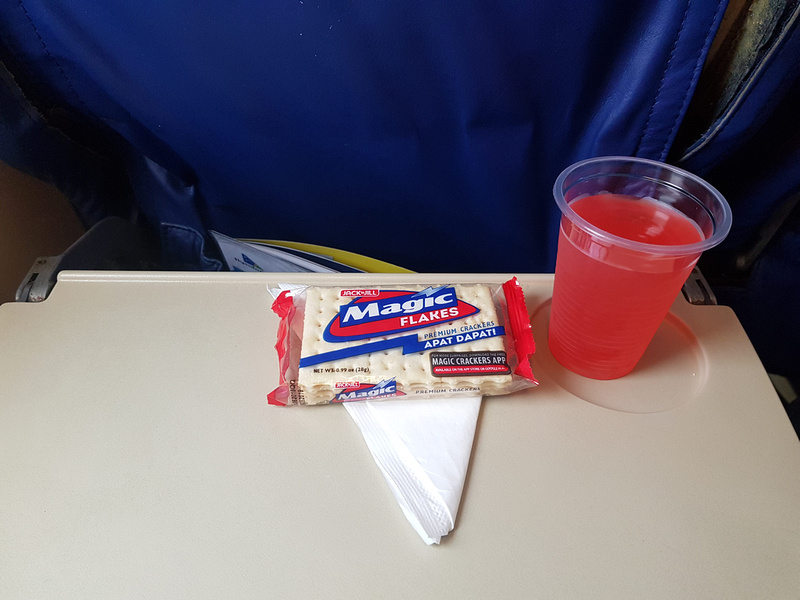 Landing in Honiara, which seems so much bigger after being in Gizo and Munda. 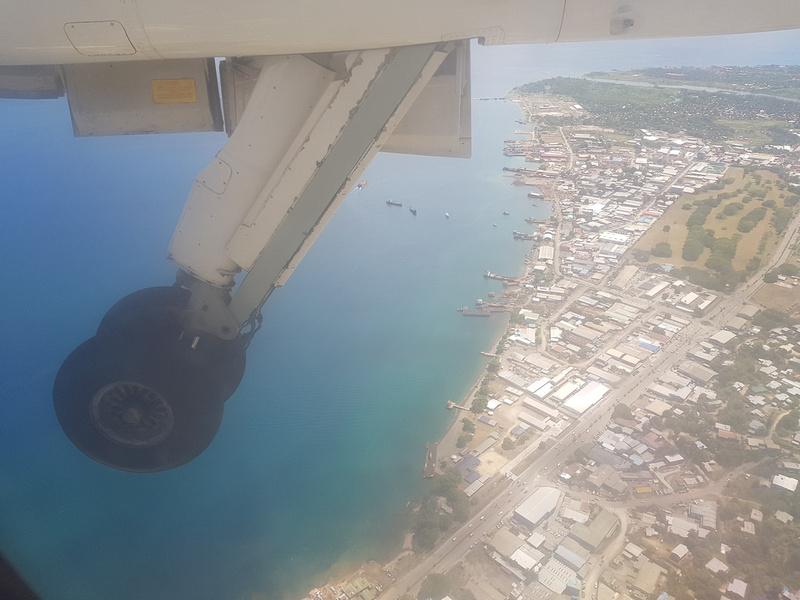 Upon returning to Honiara I was looking at the domestic route map again, wondering what other trip I could take in the future. 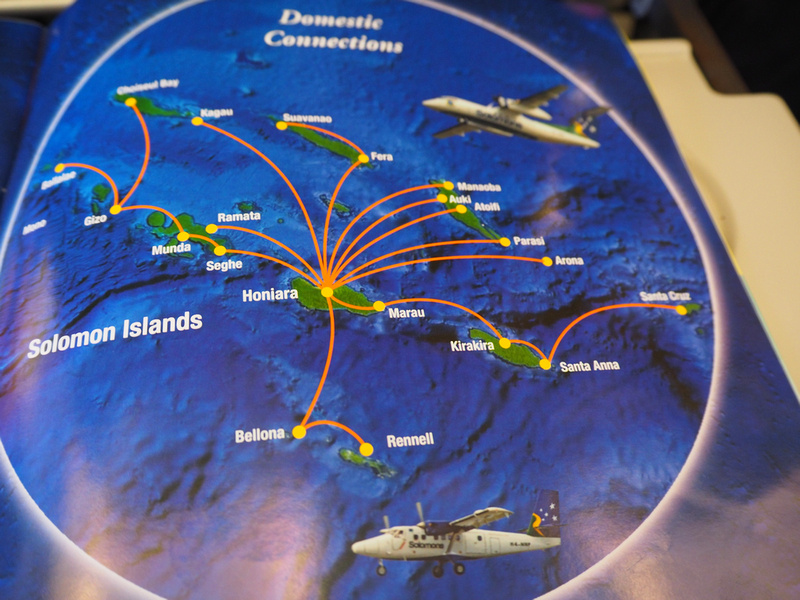 If you’re visiting Solomon Islands you definitely have to go beyond Honiara (don’t just go there to tick another country off the list). My trip was an introduction to the Solomons trip, tailored for first-timers. I can’t vouch for the rest of the islands, but I can say that this flight and the destinations was a memorable trip.