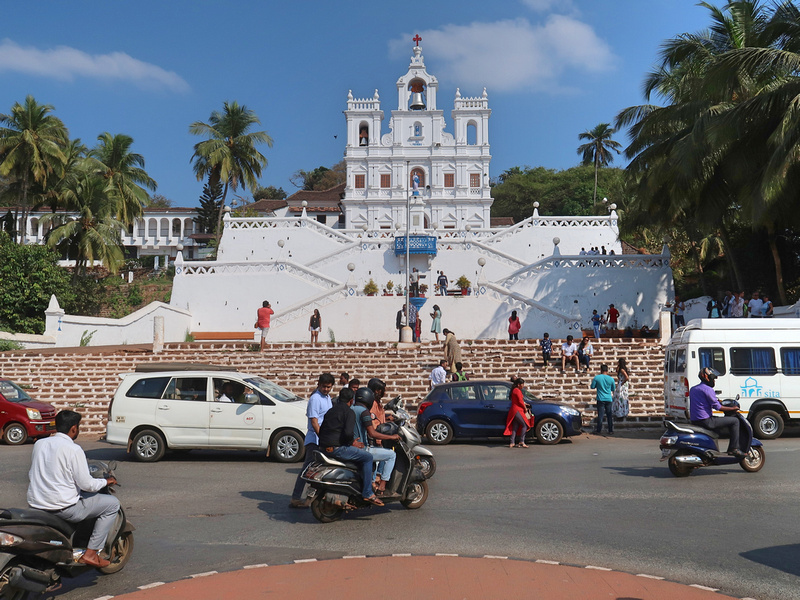 Panaji (formerly Panjim) is capital of the state of Goa. There’s no beach here, and at just over 40,000 people, petite Panaji feels positively provincial. While there are 36 states and union territories in India, Panaji doesn’t even crack the top 300 biggest cities in India. I think though that in the future Panaji will become a more well-known destination. 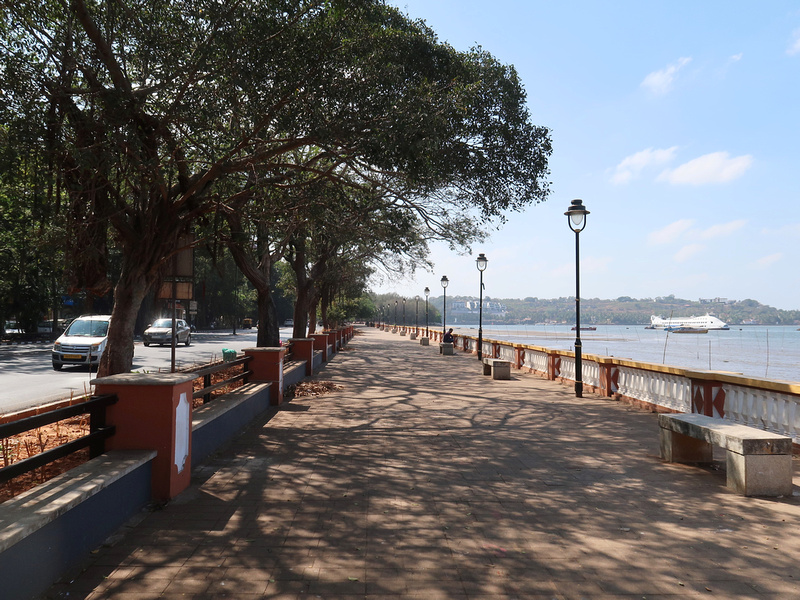 Goa is mostly associated for its beaches, and rightly so. However, if you only spent your time on the beaches you would get the impression that Goa is only made up of ramshackle beach towns. Pananji is worth a visit to see what urban Goa looks like. Panaji is also a good spot to rest if you are feeling overwhelmed by bigger cities in India. 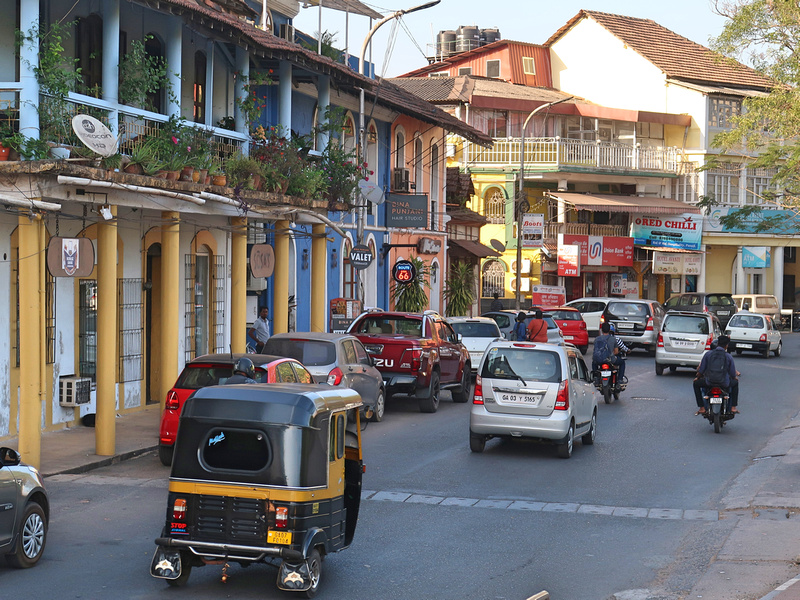 Panaji’s small and laid-back nature is fitting as the capital of the smallest state in India. It’s pace of life would be more noticeable if you were coming from one of those top 100 biggest Indian cities. For myself I arrived here after a week on the beaches of North Goa, so it was a good way to ease myself back into an urban setting. 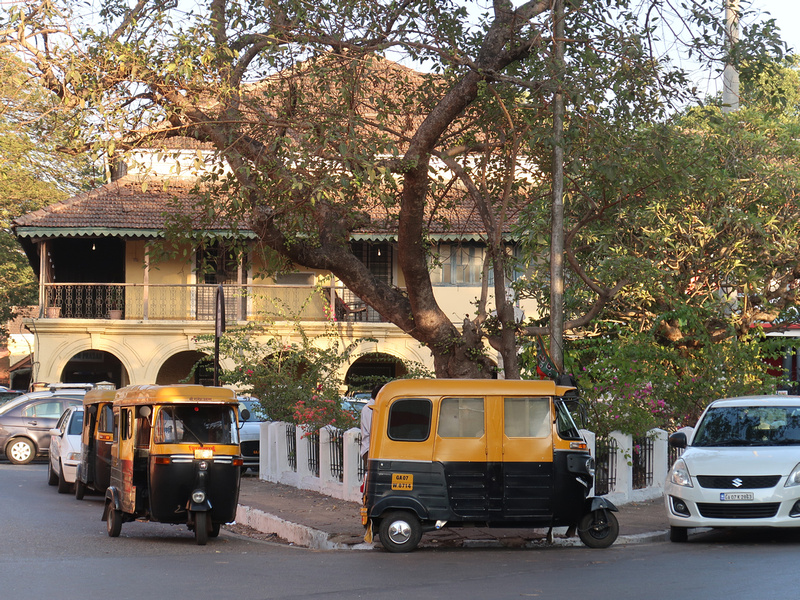 I arrived at the bus station located just outside the old city. From there it’s an easy walk into the city centre. What is immediately noticeable about Panaji is that it’s a pleasant walkable city with lots of beautiful and interesting buildings. 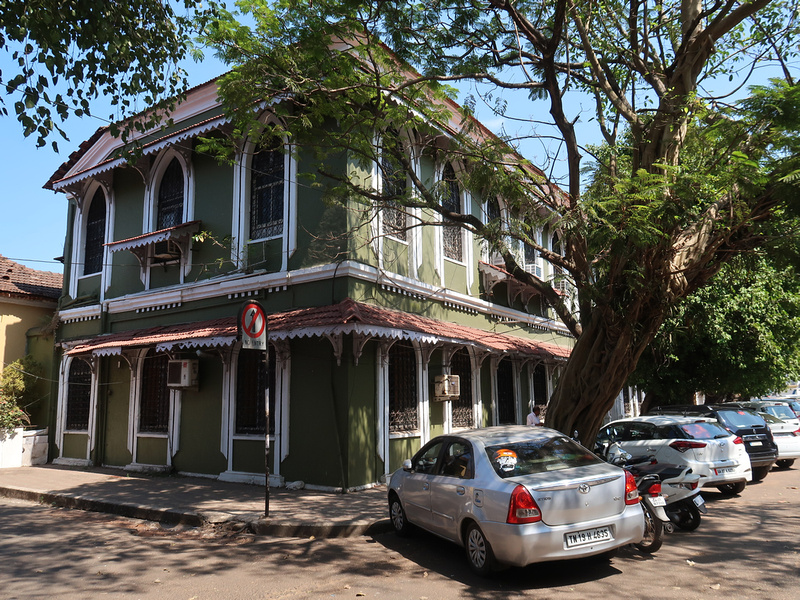 As a former Portuguese possession there are many old administrative buildings here that wouldn’t be out of place in Lisbon. The most impressive historic building is the Immaculate Conception Church.

There is a sizeable proportion of buildings that are in dire need of repair, suggesting that Panaji hasn’t yet made it onto the redevelopment radar. 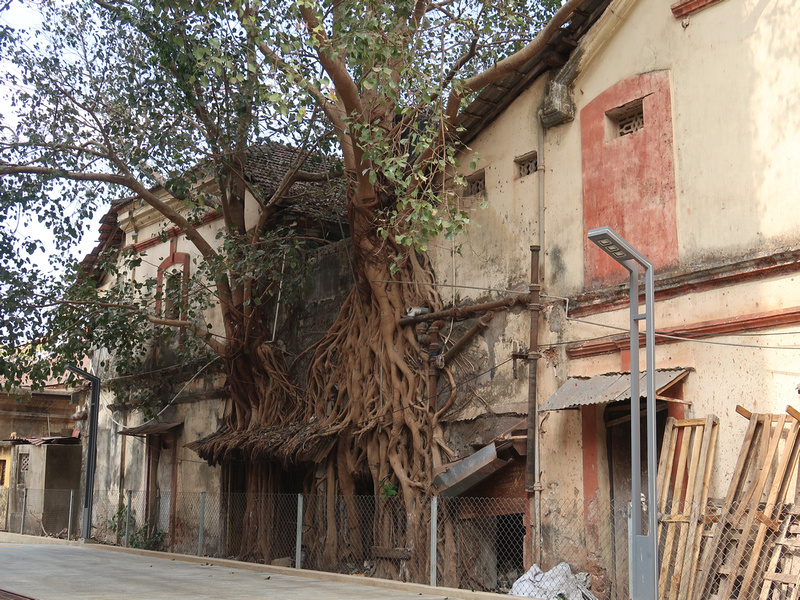 An indicator of it not being on the travel radar is the lack of cool cafes. In the city centre I found myself at Cafe Coffee Day – in Indian cafe chain that has come to the rescue for my caffeine needs on many occasions. I saw one building which has a co-working space, so maybe that is the start of something. 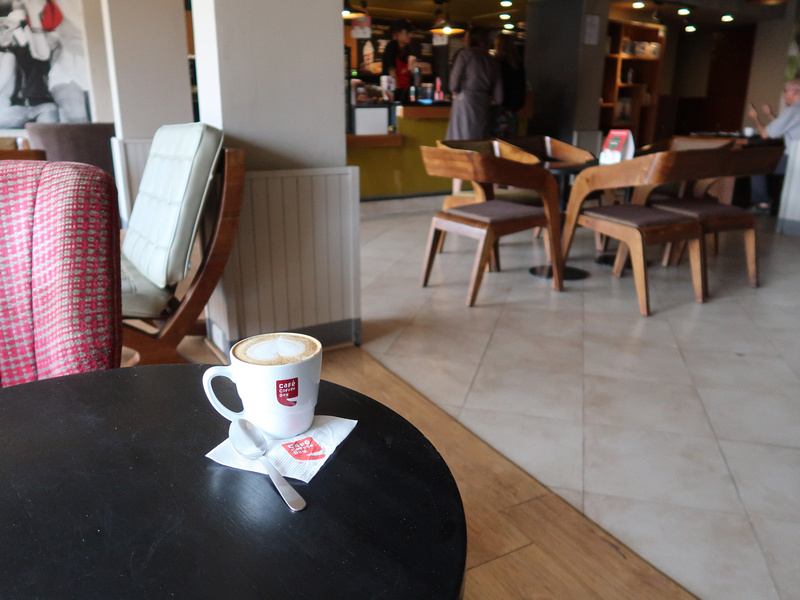 It is refreshing to visit a capital that has so few global chains. I love these old stores with hand-painted signs. 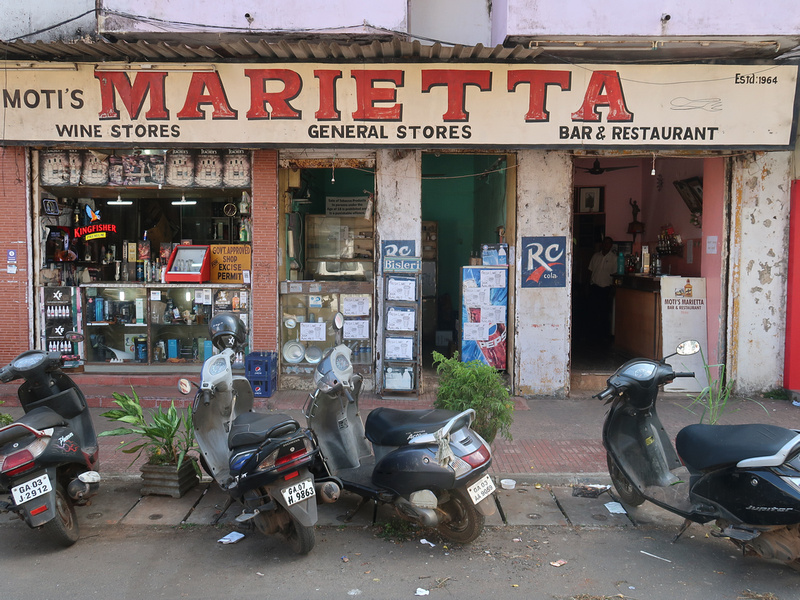 This restaurant + bar is also a portal to South Beach, Miami. 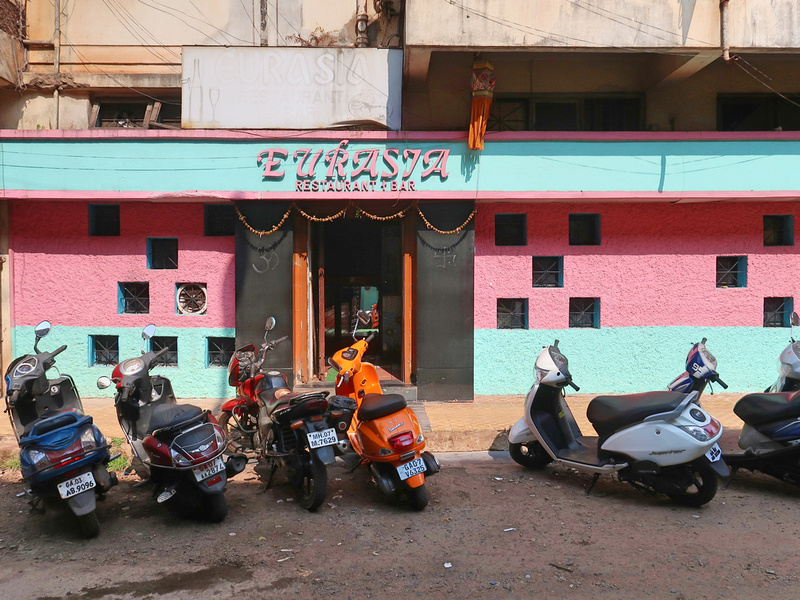 Pananji might be home to the world’s most interesting statue. Abbe Faria is considered as the Father of Hypnotherapy, and there is no mistaking what he does when you see the statue. 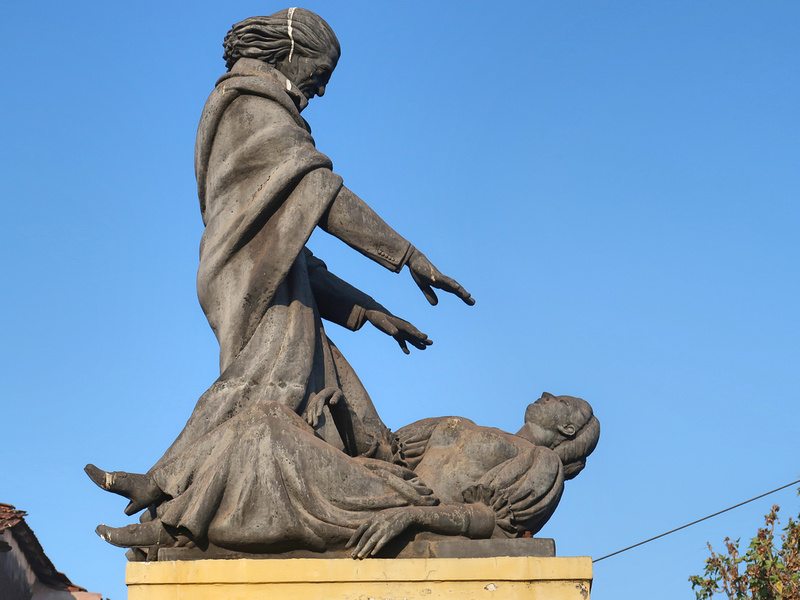 In a sign that Pananji might be on the way to becoming cool, there are some great murals around town by artist Solomon Souza. 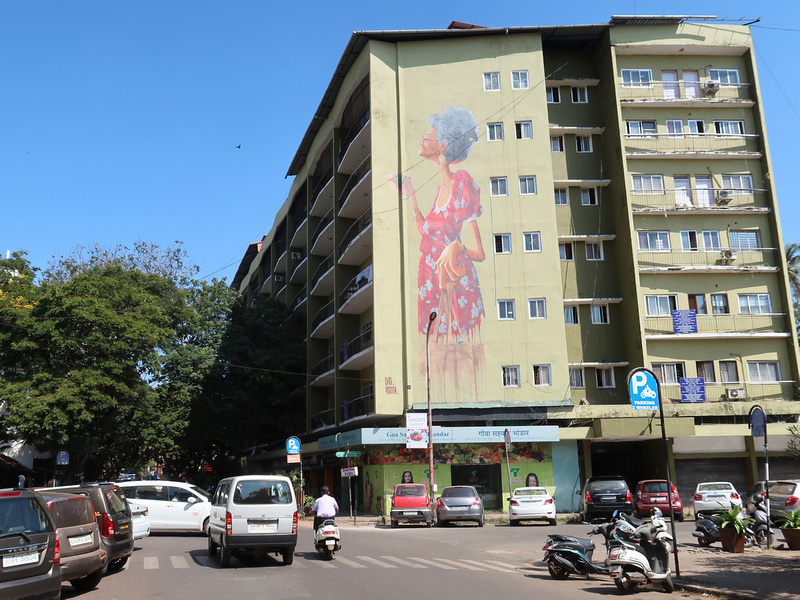 Similar public art work has become a big hit in Penang, so maybe Panaji will become famous for being a town of the arts. 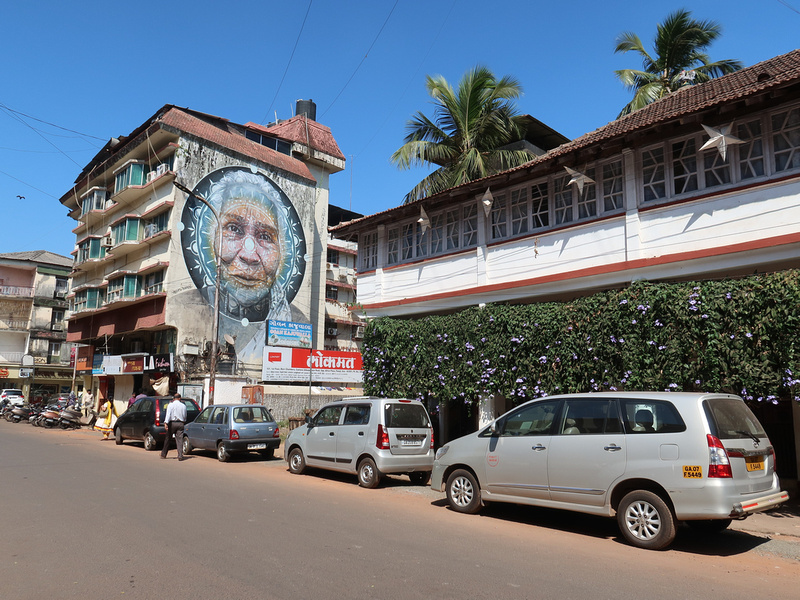 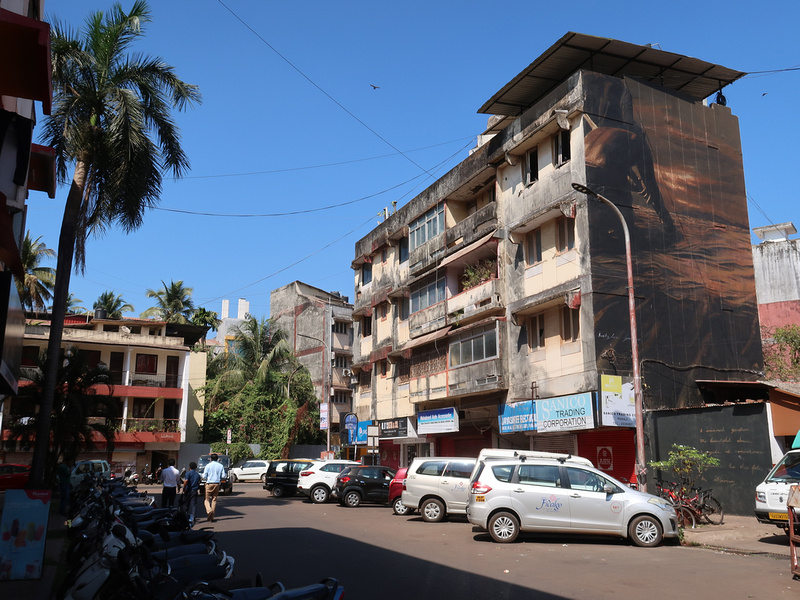 I wondered what Pananji would be like as a nomad hub, and I think it has potential. One of the issues I had with North Goa as a nomad base is that the local transport is terrible. It took a 90-minute insane taxi ride to get from the airport to Anjuna

This may improve with the construction of the new Mumbai-Goa highway. At Panaji the new bypass bridge is open, and at the time of my visit work was underway to extend the expressway south to the airport. 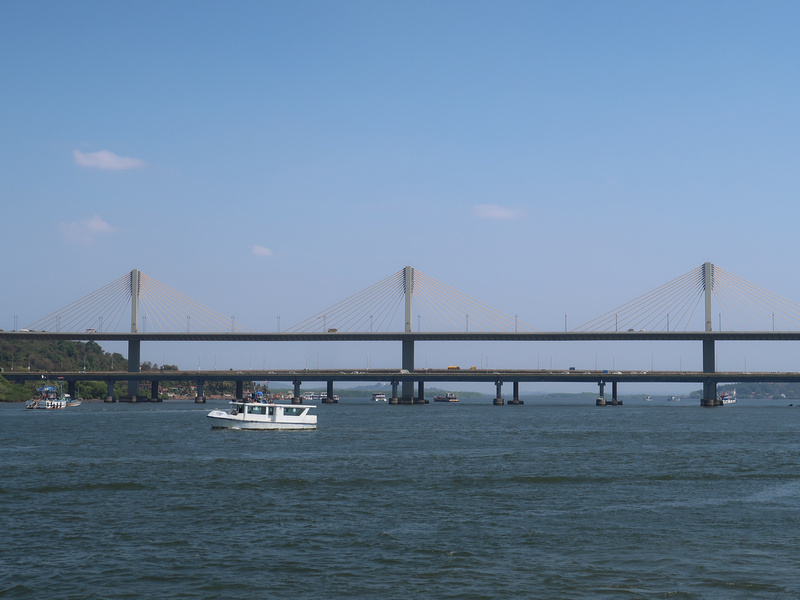 This could bring the travel time from the airport from 45 minutes to 25 minutes, making it a more attractive base for businesses. 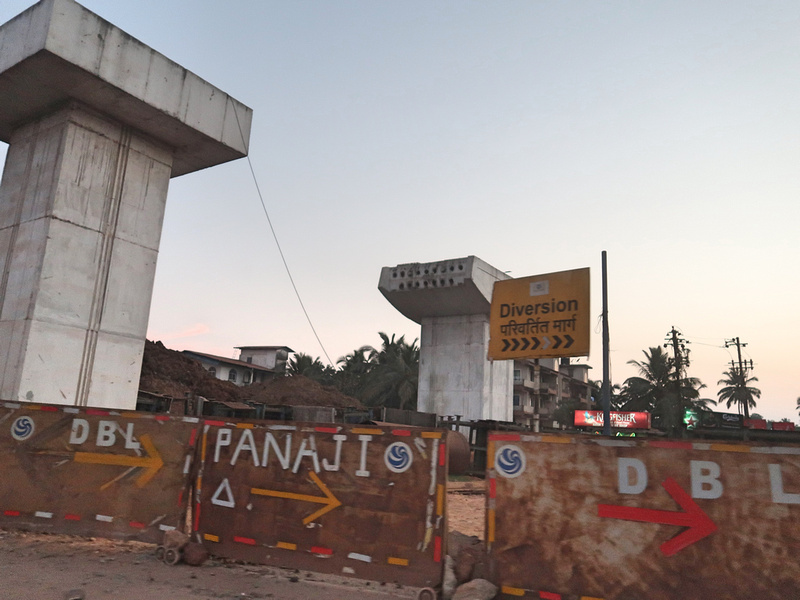 There is a tourism hotspot in the area known as Fontainhas (Bairro das Fontainhas in Portuguese), the old Latin Quarter of Panjim. Goa was formerly part of the Portuguese State of India until India reclaimed its territory in 1961. Even now Fontainhas still retains its Portuguese feel. 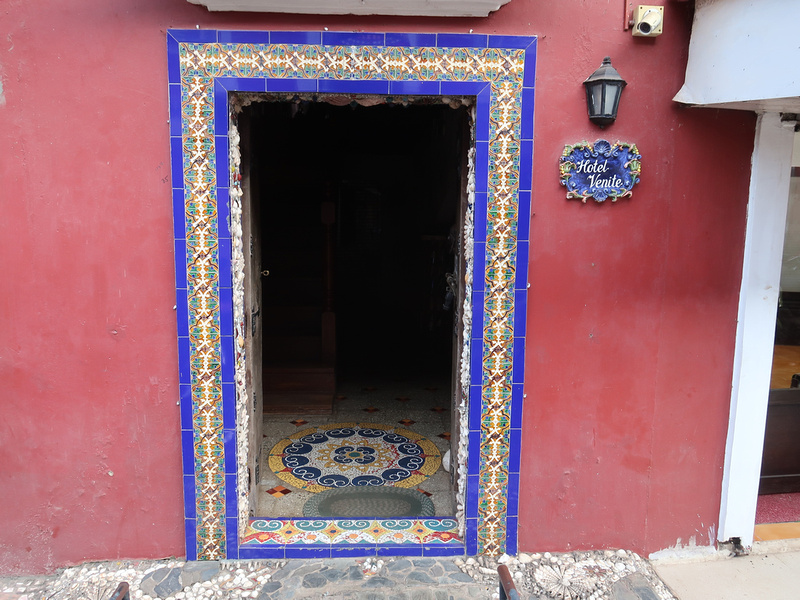 I found the Bombay Coffee Roasters (who I also visited in Vagator, North Goa), and in a few years I think there will be more cafes here. 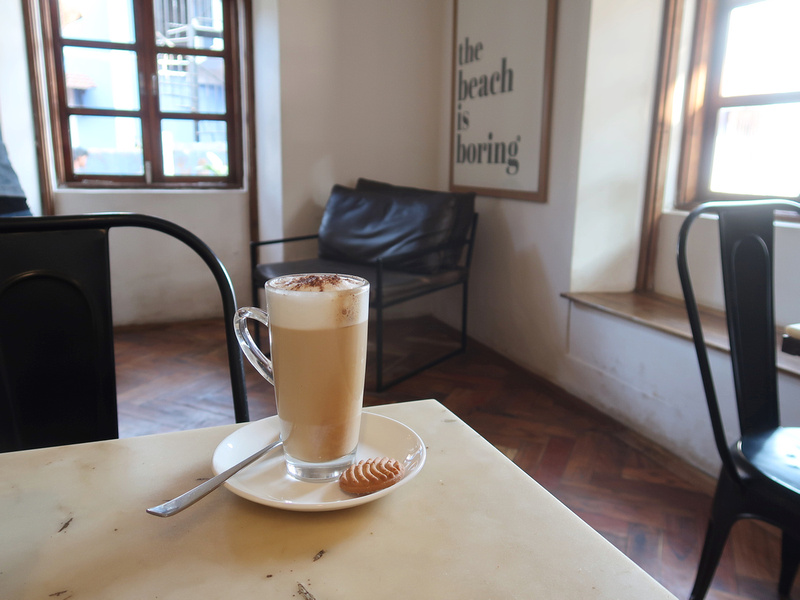 And there is a lively street market in the evening. 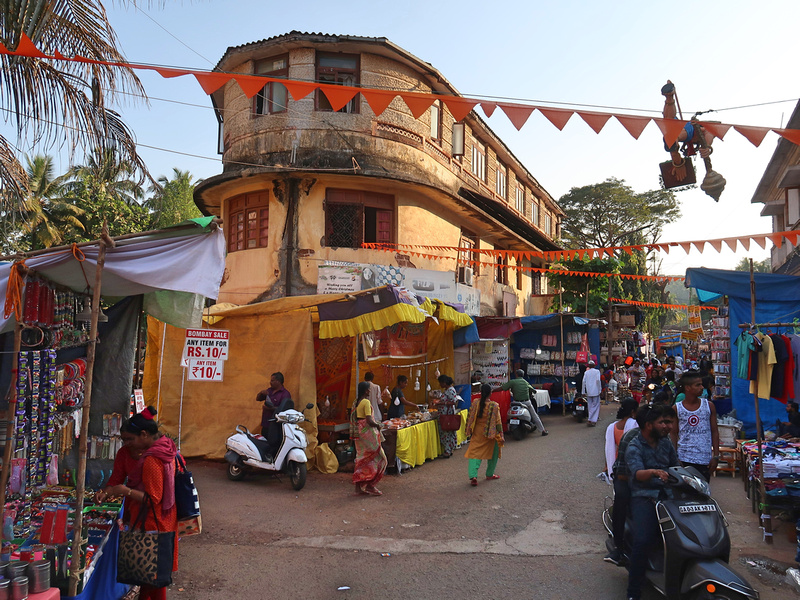 The peacock stairs are just waiting to become Insta-famous. 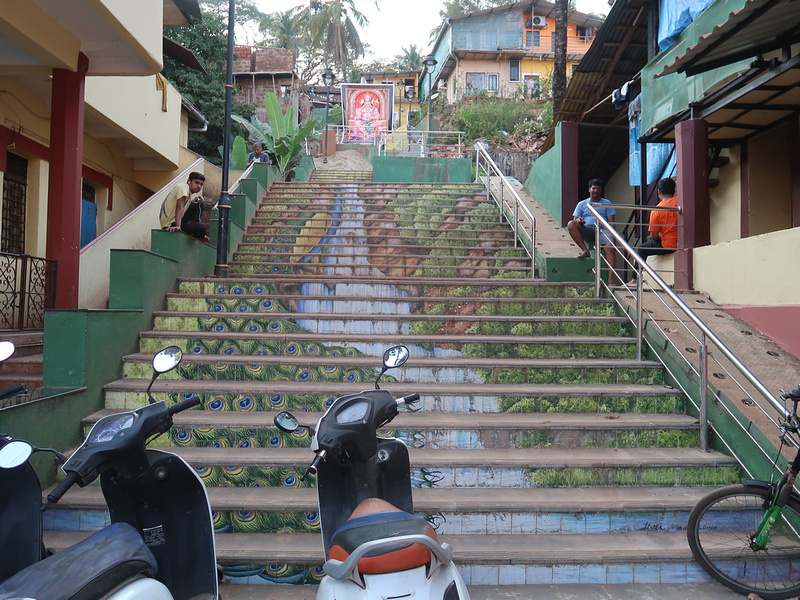 There is a sign here that mentions that Fontainhas was declared a UNESCO heritage zone in 1984. However if you go to the UNESCO site there is no mention of Fontainhas. Old Goa (the former capital that abandoned due to a plague) is a UNESCO World Heritage site, but it shouldn’t be confused with Fontainhas. Now if you do a search for Fontainhas on Google you will see this line introducing articles about Fontainhas. 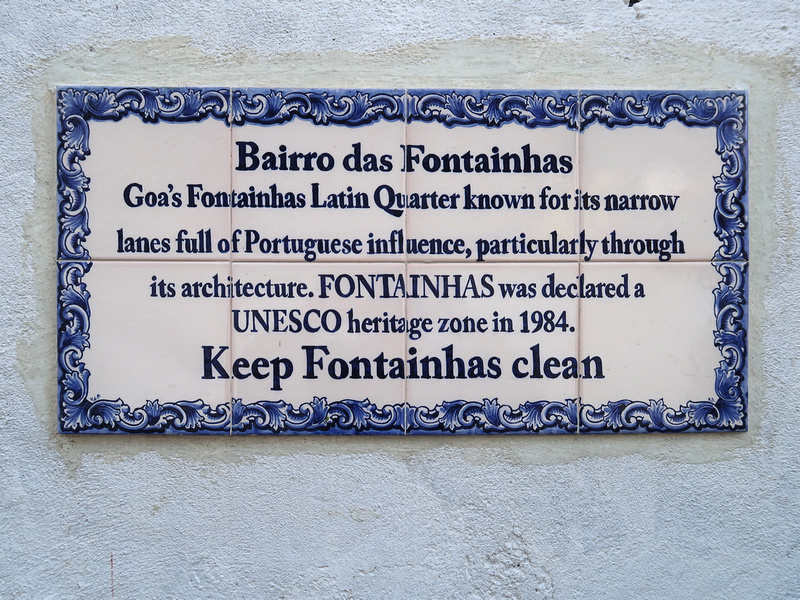 The other big change that’s happening in Panaji are the casinos. I mention that Panaji is the Macau of India because – like Macau – it’s a former Portuguese possession that has become the casino capital its country. 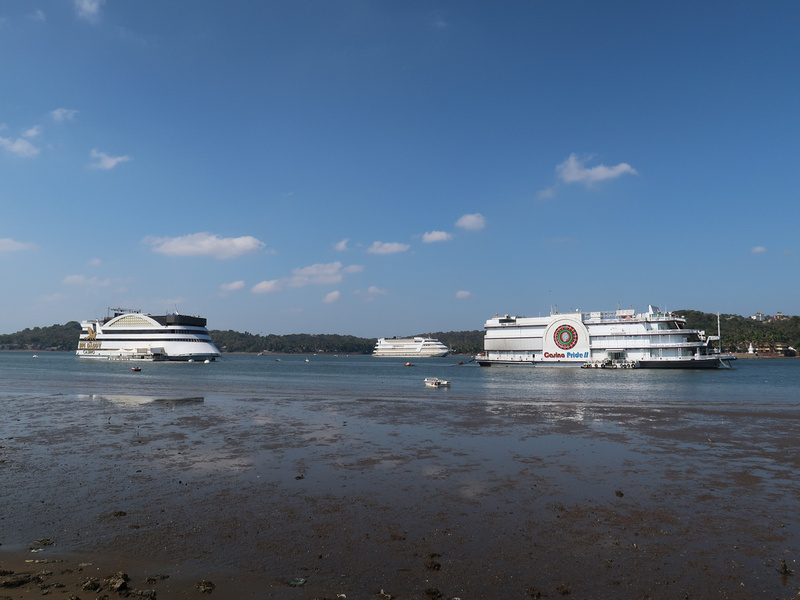 Casinos are only allowed in a few states in India, and so far Panaji has the most casinos (though not the biggest). 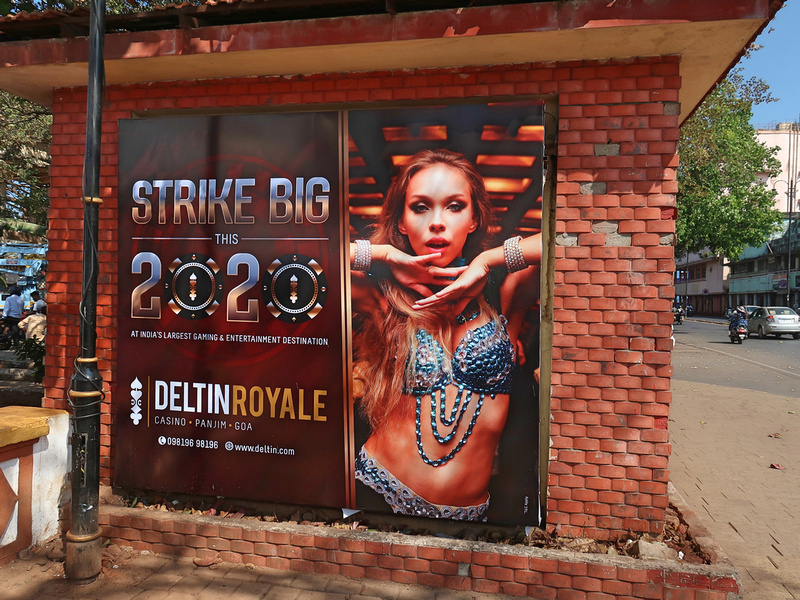 The casinos are “offshore” on riverboats. Each boat casino has its own reception on the riverfront where you can get a boat to the casino. 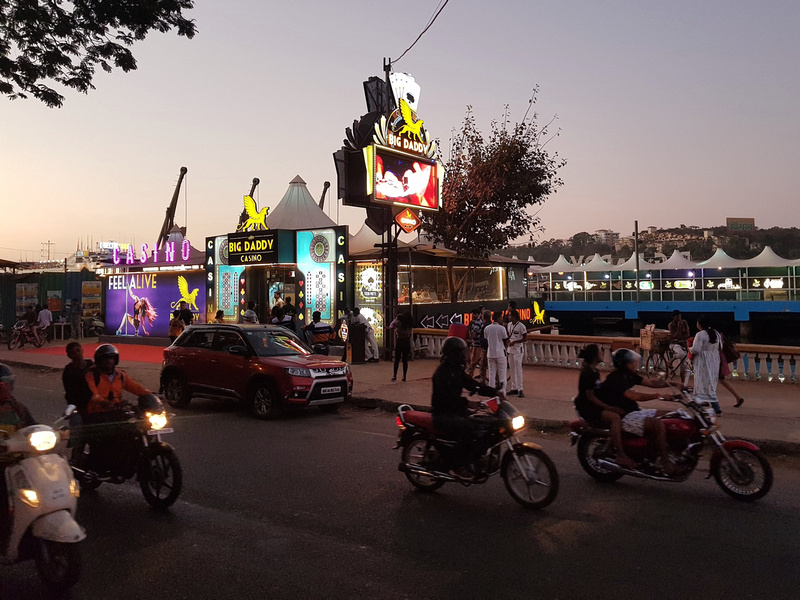 I had considered going to have a look. It was a Friday night, and when I got to the docks there were queues to get a boat. Then I thought about how I don’t really like casinos, and the thought of being stranded on the boat while waiting for a ride back was enough to put me off. 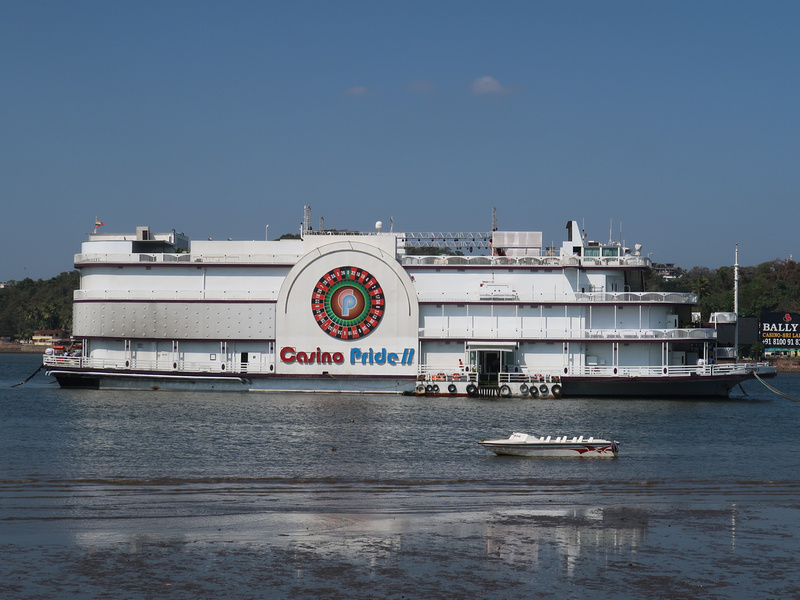 Goa is one of those places where I could see myself returning to in the future, so I look forward to seeing how Panaji is getting along. Maybe in 10 years time it has become a new digital nomad hotspot. 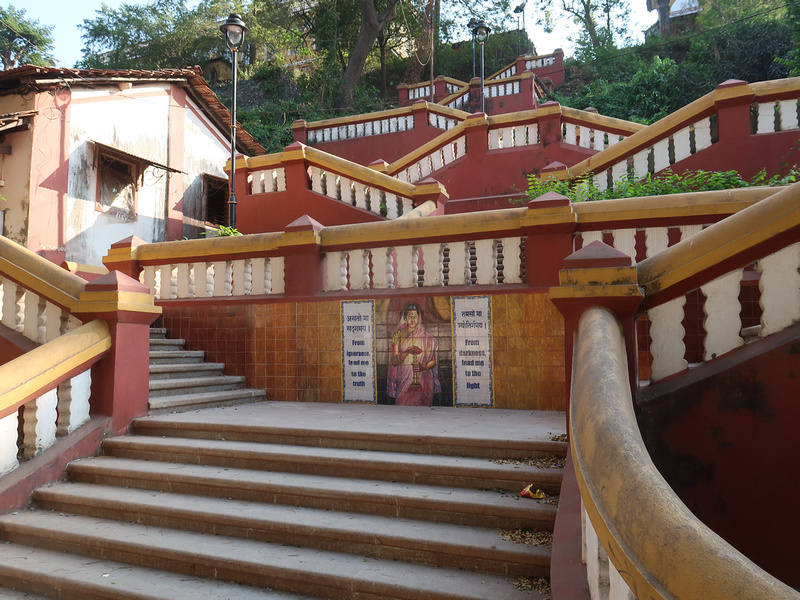