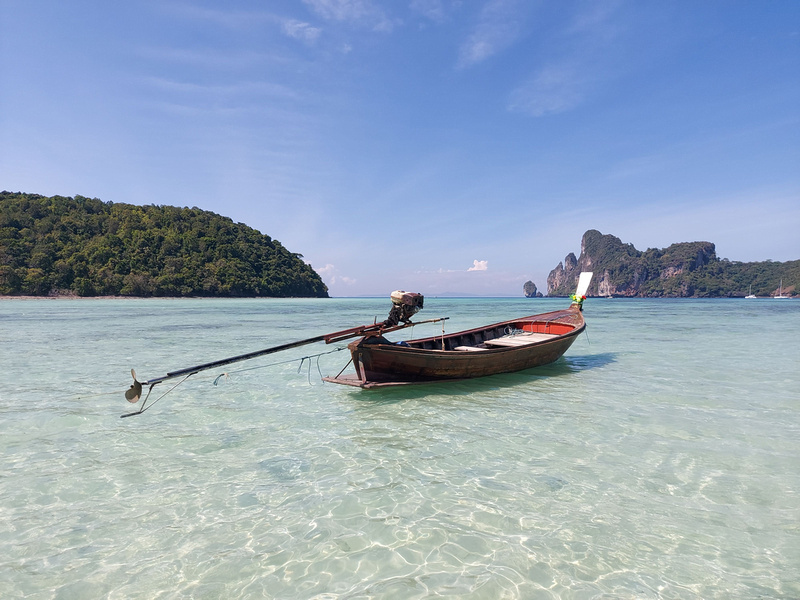 The Phi Phi Islands (Koh Phi Phi) are an island group in Southern Thailand in the Andaman Sea, in Krabi Province.

The two biggest islands in the group are Ko Phi Phi Don and Ko Phi Phi Le. At the height of the tourism boom in 2019 they had become more famous for overtourism.

Phi Phi Don is a small island where the only cars are service vehicles. The island is a popular backpacker destination that feels like Khao-San-On-Sea (Khao San Road being the big backpacker street in Bangkok). 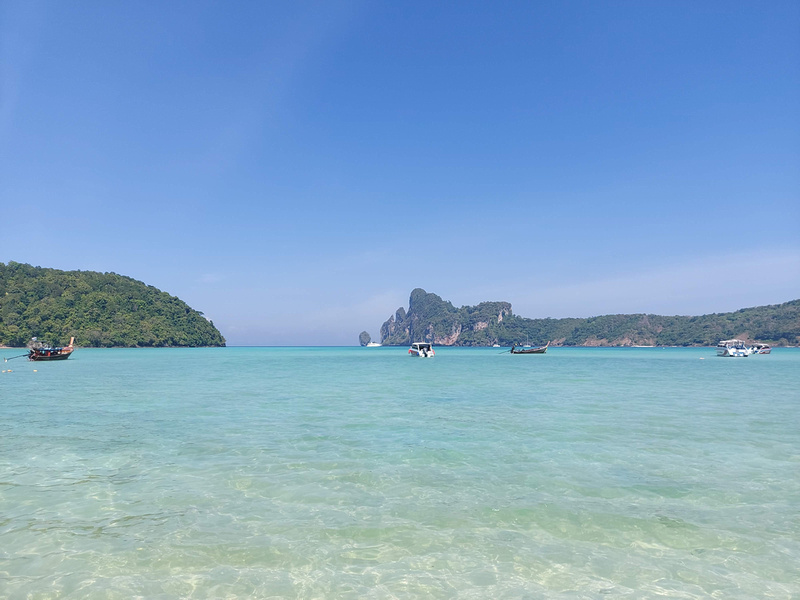 Ko Phi Phi Le is the island that became famous for being the filming location for The Beach, and by 2019 it had become the poster child for overtourism. Any story about overwhelming crowds in Thailand would usually include a picture of the small beach at Maya Bay lined with speed boats.

I visited Phi Phi Don in 2006 when it was still recovering from the tsunami. Even then it was a firm favourite on the banana pancake trial, and after experiencing the crowds of Phi Phi Don I didn’t even bother going to Phi Phi Le.

I was in Phuket in January 2022 and my next stop was Koh Lanta. I hadn’t planned on going back to the Phi Phis, but they are midway between Phuket and Lanta by boat. Some boats stop there even if you aren’t going. Thailand had only recently reopened so I figured I am never going to be in this part of the world again with so few visitors, so I got off the boat in Phi Phi Don. 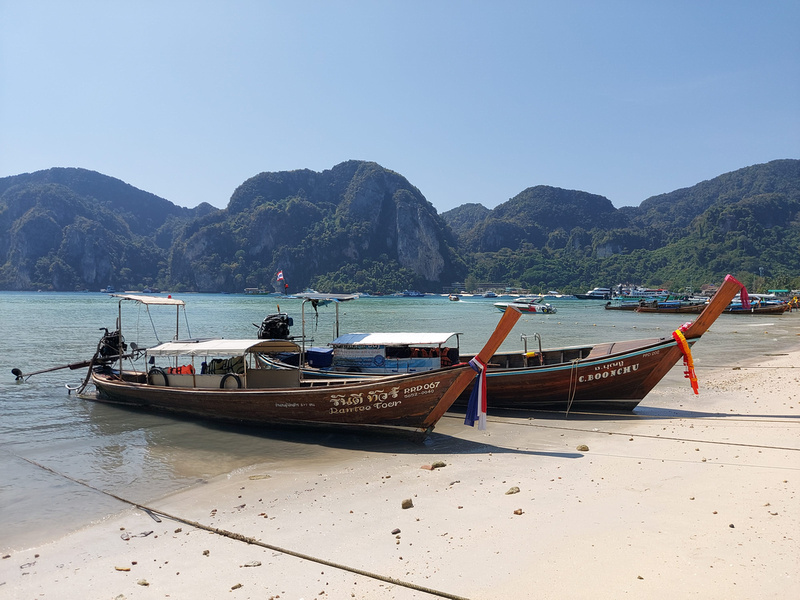 It had been hard to judge how the tourism recovery was fairing at this point. I had been in Bangkok where Khao San Road was looking like a ghost town. On the ferry to Phi Phi, I saw more backpackers than I had seen anywhere else.

I arrived at the main dock and I started laughing when I saw there was a Burger King at the main entrance. I had no idea it had become this developed. 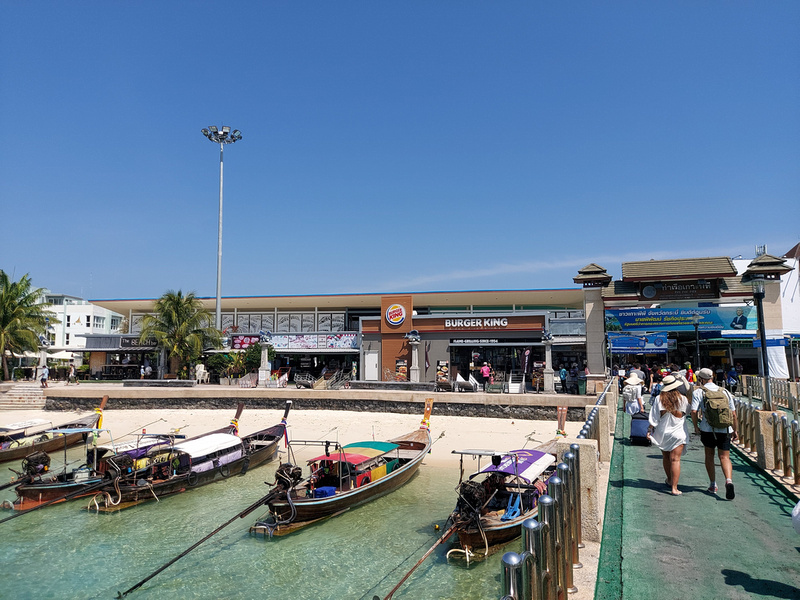 The alleys near the dock had a McDonalds and 7/Eleven, and ATMs with actual bank branches. 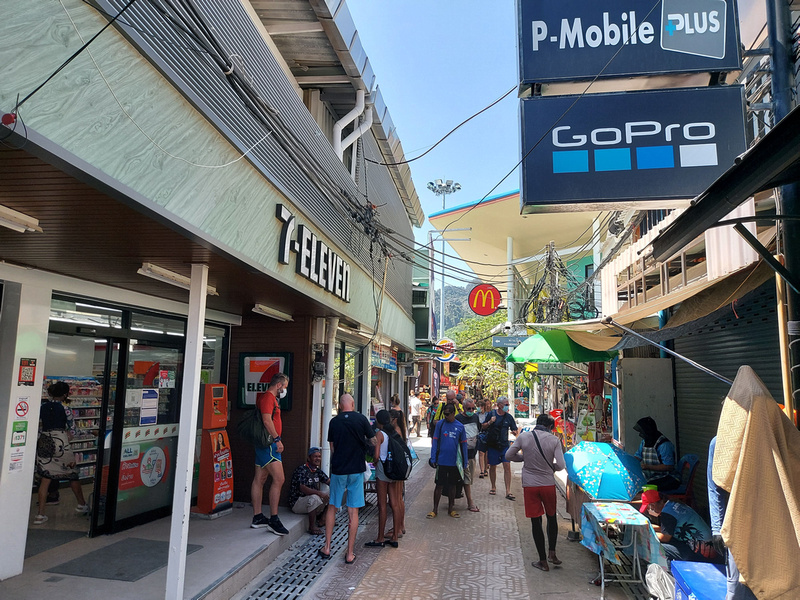 The island has come a long way from when you had to make sure you had enough baht before arriving. 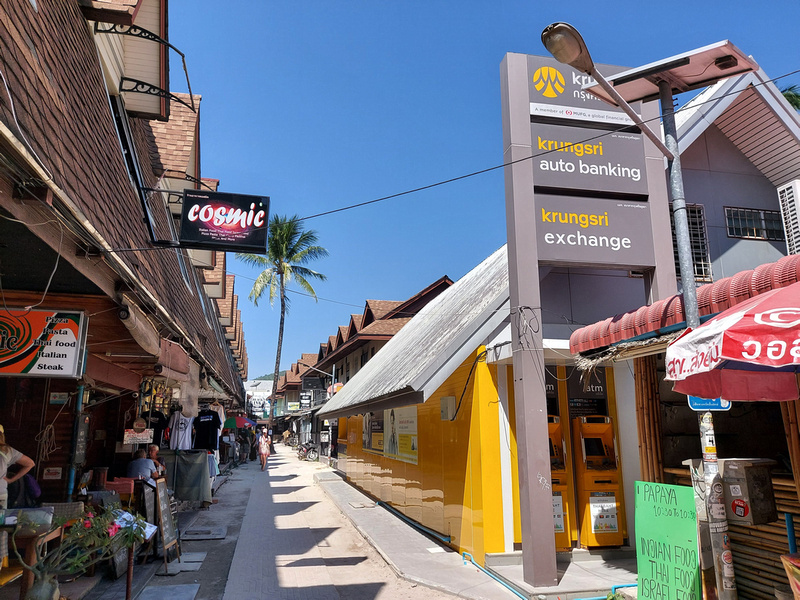 Phi Phi Don is a jumble of pedestrian alleys so I had to keep referring to my map to find my guesthouse. I was staying about as far inland as you can get, but the island is so small that there isn’t one spot that is more advantageous over the other.

After dropping off my bags I went exploring this little island. Even though tourists were returning to Phi Phi, it was going to take some time to get shops reopened or re-tenanted. 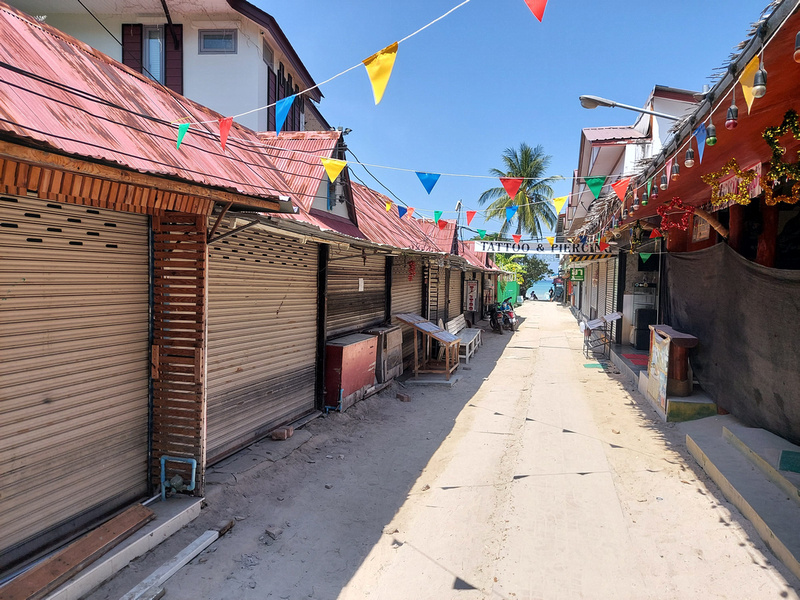 Many of these tourist places have workers from all over Thailand, so when the island closed down, workers went back to their hometowns. I got a massage and found out my masseuse was from Mukdahan in the Isaan region of Thailand.

One thing that I think about on such small islands is how all the stuff gets here. Not just food, but the cement and bricks that are used for building. Near my guesthouse, I saw a hotel under construction, so I stopped to watch the concreting process. An entire concrete slab was being poured with a single little mixer, with the concrete being poured down a slide. It made me wonder how the bigger hotels were built if there are no concrete-mixing trucks. Later on I stopped to watch some workmen who were in a hole digging a drainage pipe. It was around this point that I realised then that my sightseeing experience was probably unlike most people who were visiting. 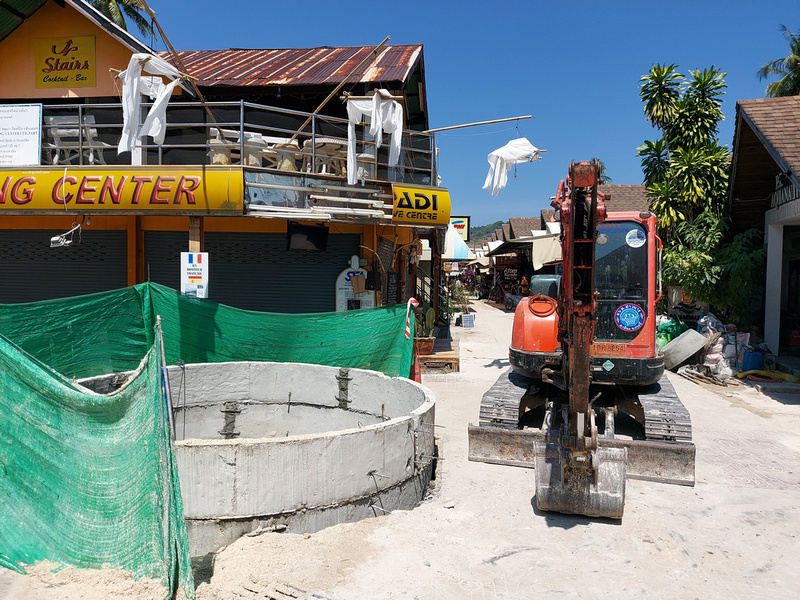 A playground for backpackers 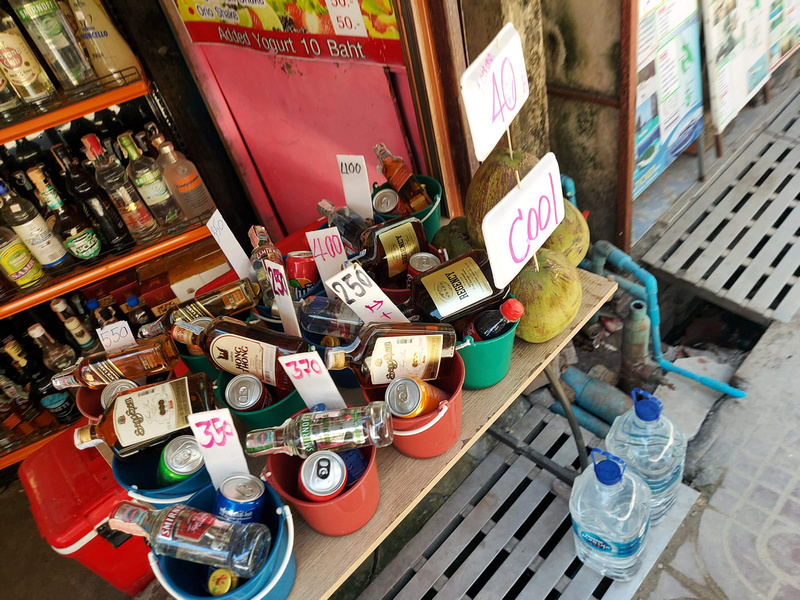 There was a high proportion of young, fresh-faced backpackers here. 20-year-old James would have loved this place. I would have loved it too much probably, especially with those buckets of cheap assorted alcoholic beverages.

Thankfully for me and for the good people of Thailand, I did not have my act together to get to Thailand in my drinking years. As a sober person who is the age of most peoples dad’s, I do stand out in places like this. This is not a place I would go out of my way to go to, but I like visiting such places briefly from an anthropological perspective. I like seeing things that you would see back home, so yes, you would not see something like this in Australia.

Fortunately for me, the cafe scene had improved considerably since my first visit. I had a look around to see what places had reopened. I liked Patcharee Bakery for the coffee and ambience. 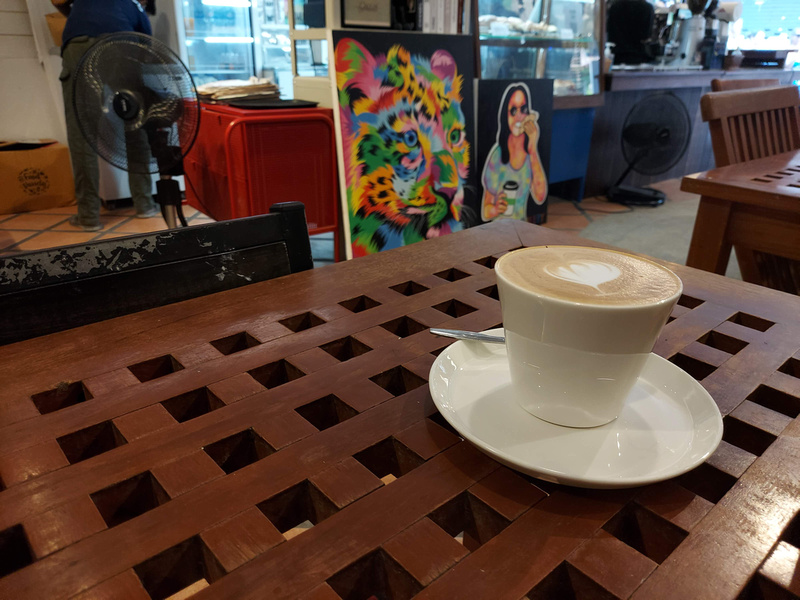 Tucked away in a little alley is Aroy Cafe. 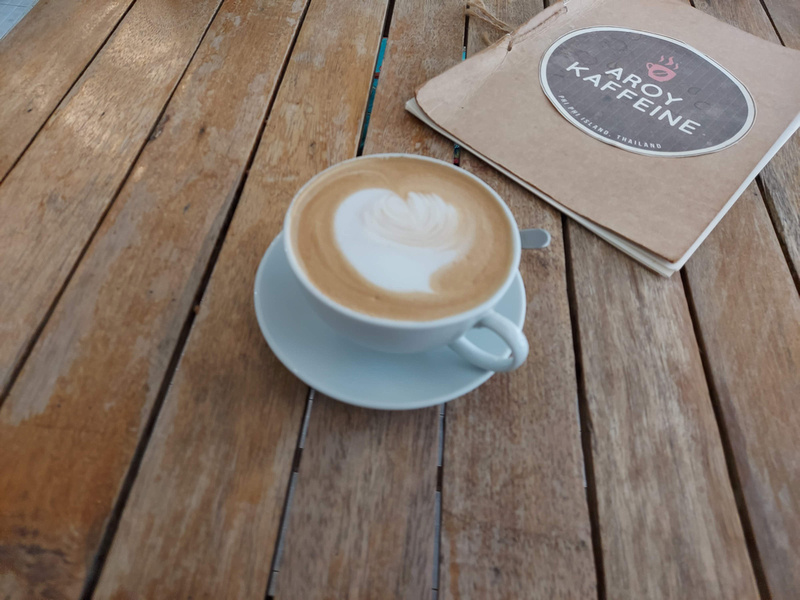 There is even a chain cafe here, The Coffee Club from Australia. After skipping Phi Phi Le on my first visit, I felt compelled to go this time. I booked a sunrise boat tour to visit Maya Bay and some of the other points of interest. 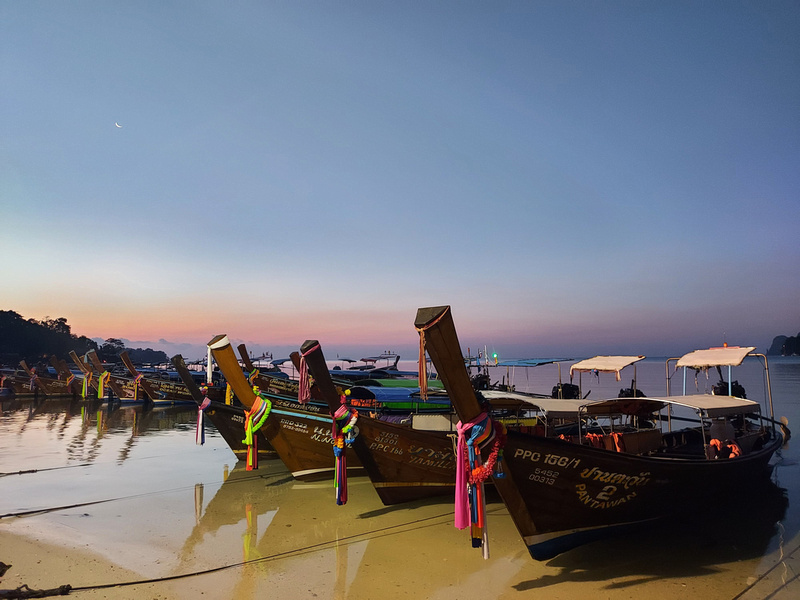 When the bay was closed to visitors, a new boat dock was built on the other side of the island. 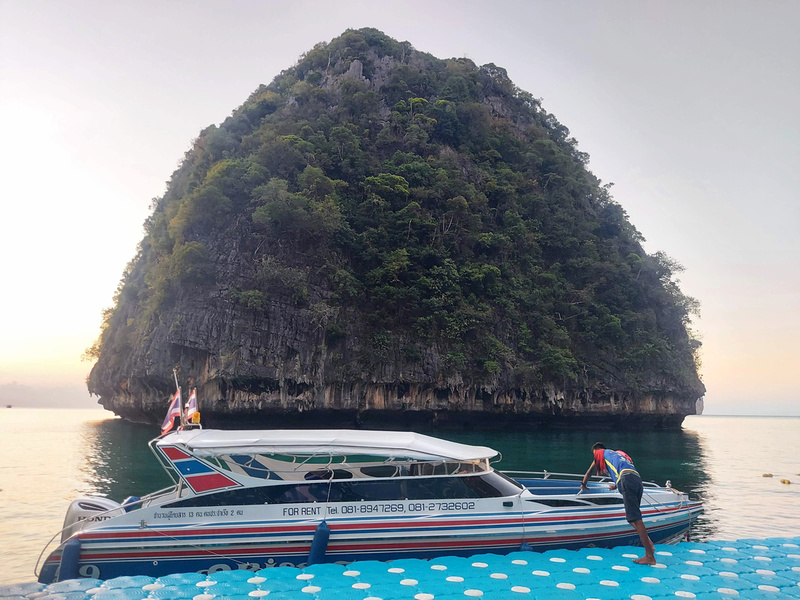 Passengers now get off at the dock and pay admission at the national park booth. 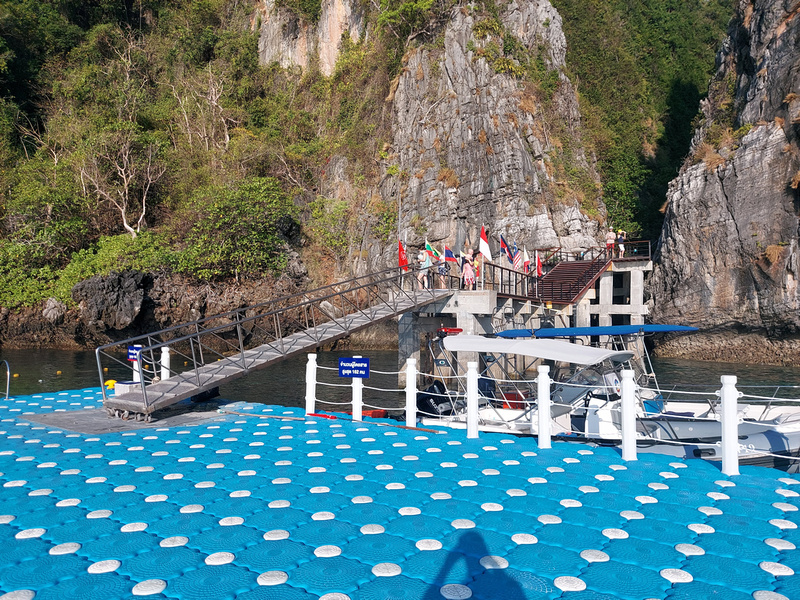 This is Thailand, so there is a dual pricing system (40 baht for Thai and 400 baht for foreigners). 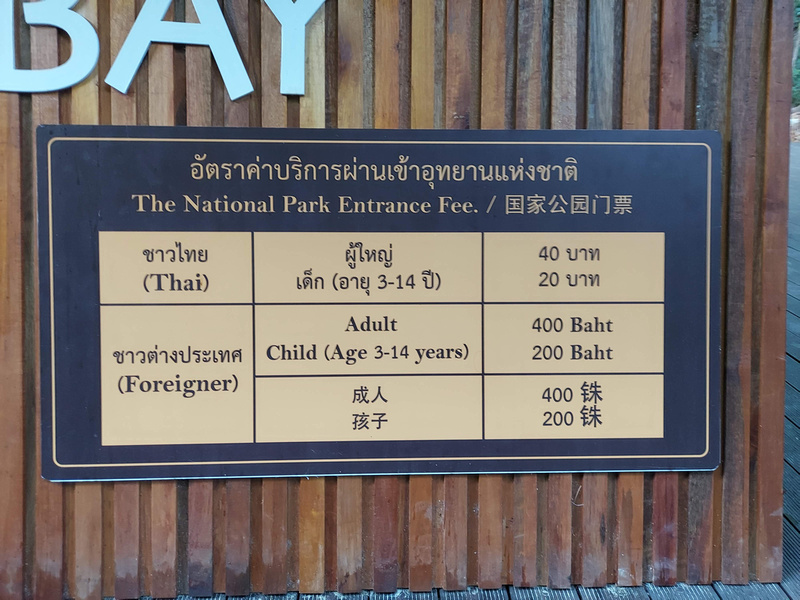 There is an elevated walking deck that goes through the park to the bay, and it only takes about 5 minutes to walk. 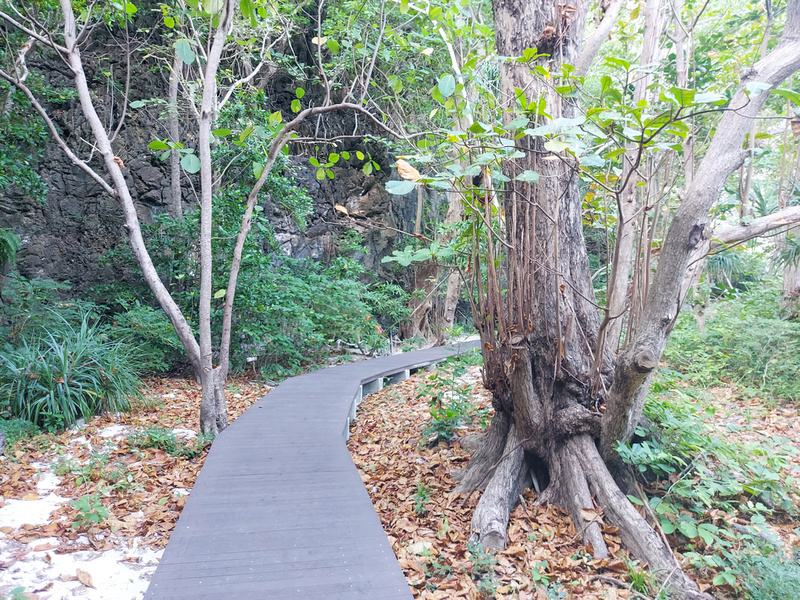 At the end of the walk is Maya Bay and “The Beach” of Leonardo DiCaprio fame. 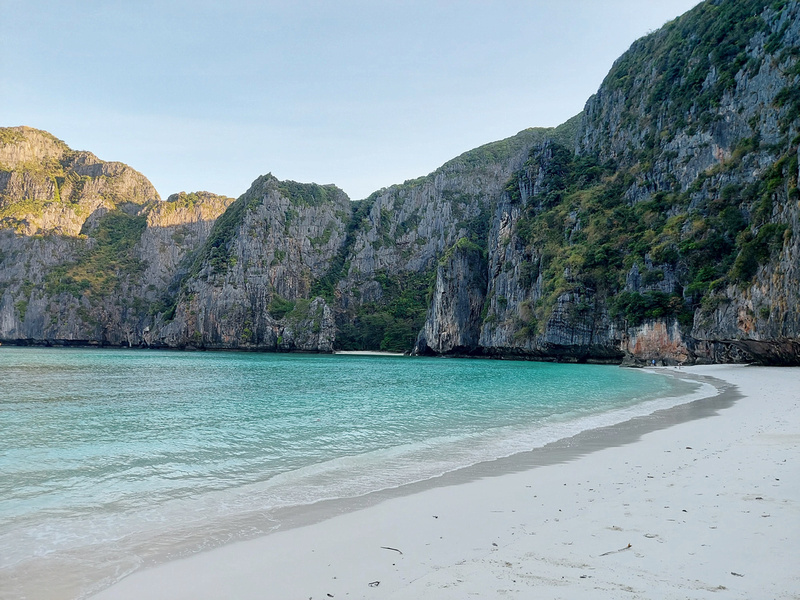 I was in the first boatload for the day, so there were only eight of us at this hour. 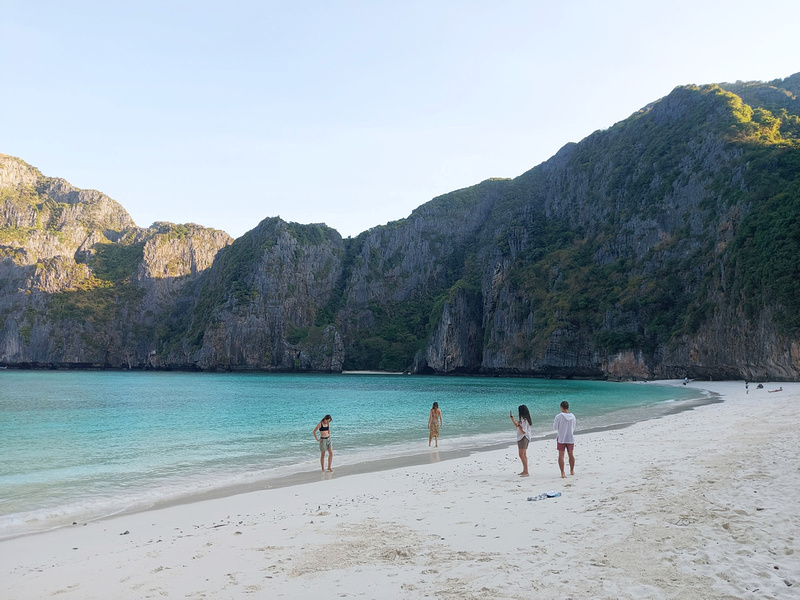 There were some beach cleaners at that hour as well. 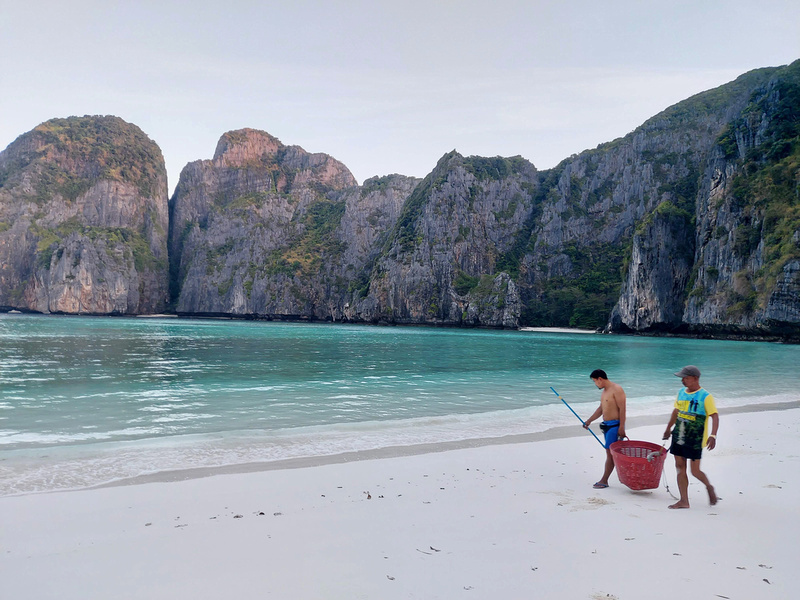 It occurred to me on the beach that there were some people in the group who weren’t born when The Beach was released.

Another boatload turned up, but it was still too early for the main groups. In hindsight it would have been better to go later in the day. The sun had not risen above the island and the water was not the sparking tropical blue.

Still, it was good to see this beach without any boats parked there. You could even see some blacktip reef sharks in the shallow water along the beach. 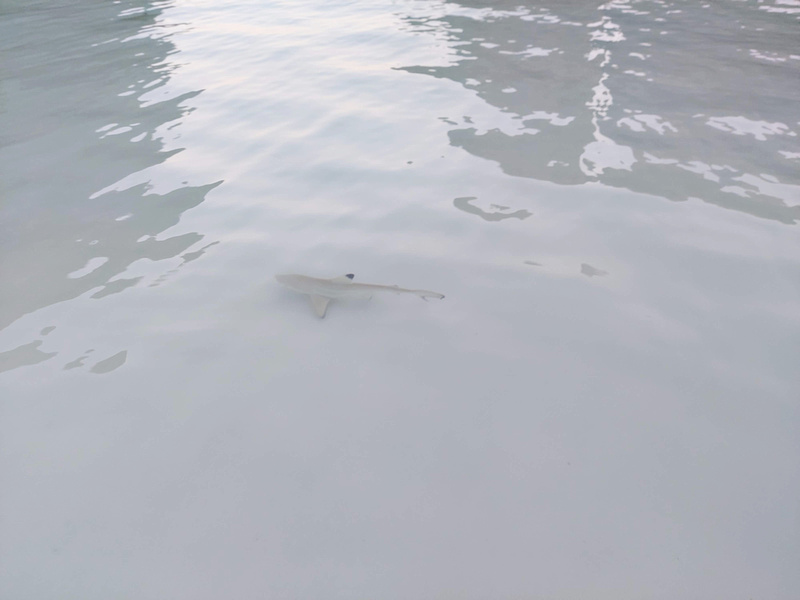 Back on land in Phi Phi Don, I went for a walk up the big hill. There is a lookout here where you can see the isthmus of the island. 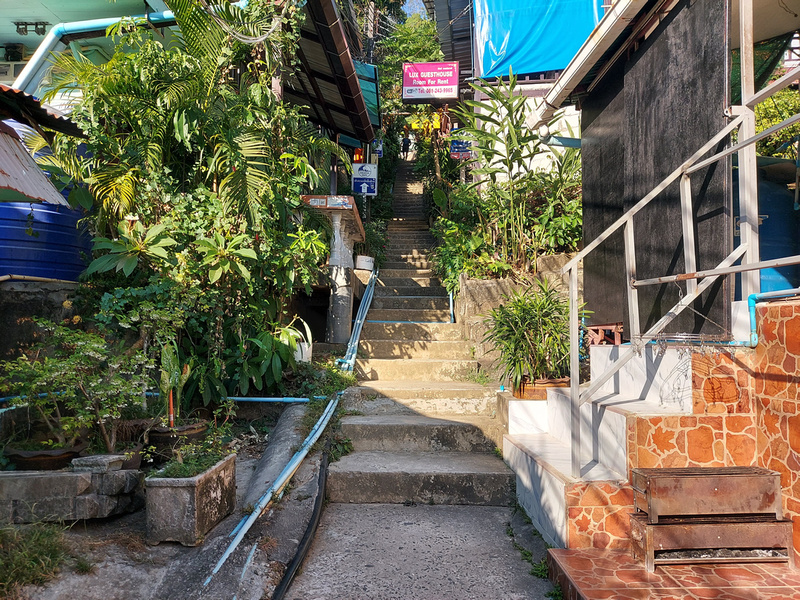 The view from here is the best-known photo vantage point of the island. 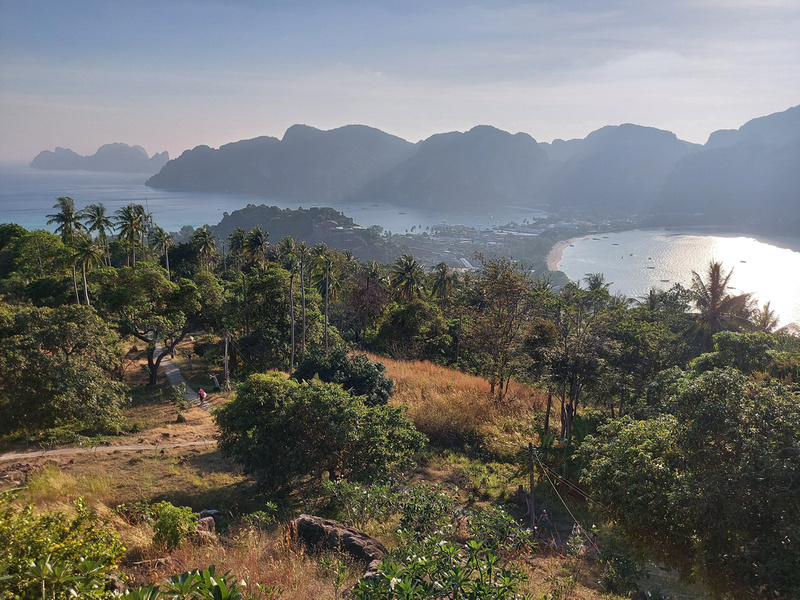 On the walk up to the viewpoint, there is a display featuring before and after photos of the 2004 Tsunami. 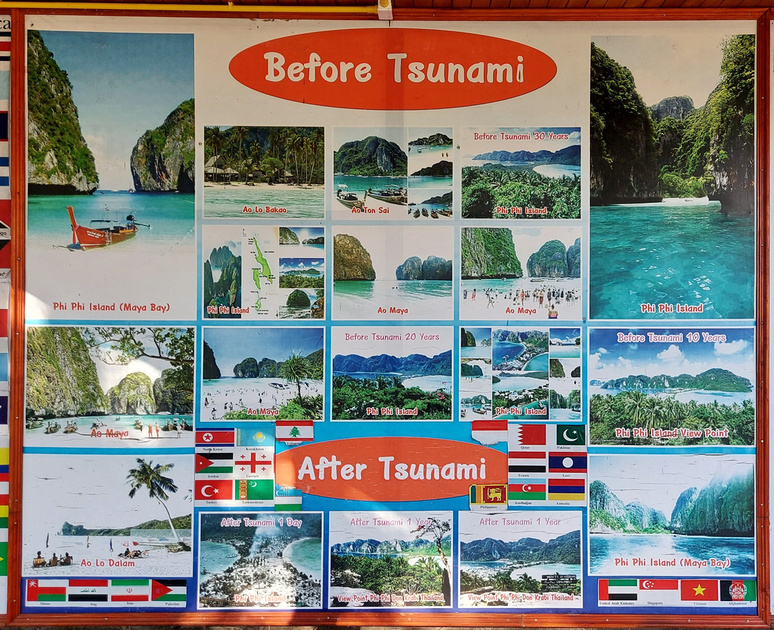 Walking around the back streets (if such a small island can have back streets) I found the tsunami memorial, which can’t help but move you to tears when you see the list of names and photos left behind. 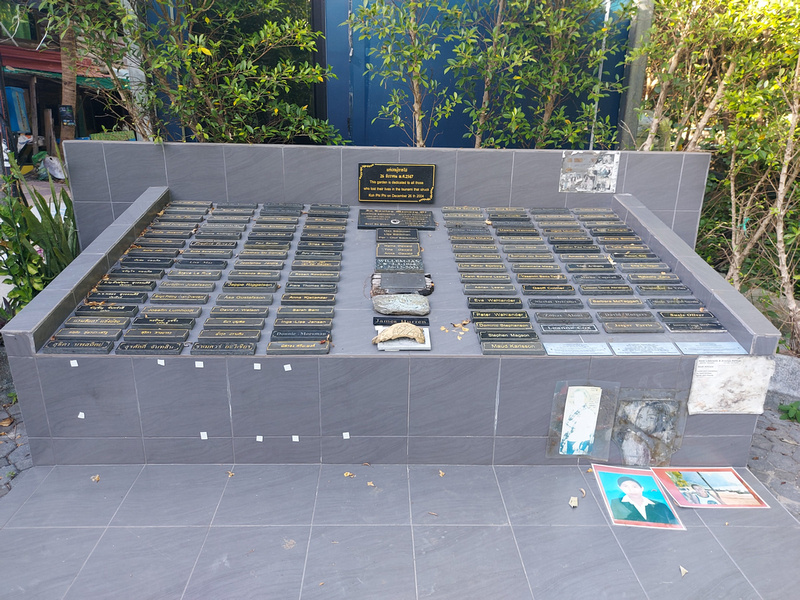 Nearby is a tsunami evacuation building, which is a concrete shell with wide stairs in case the island ever has to go through such a traumatic experience again. 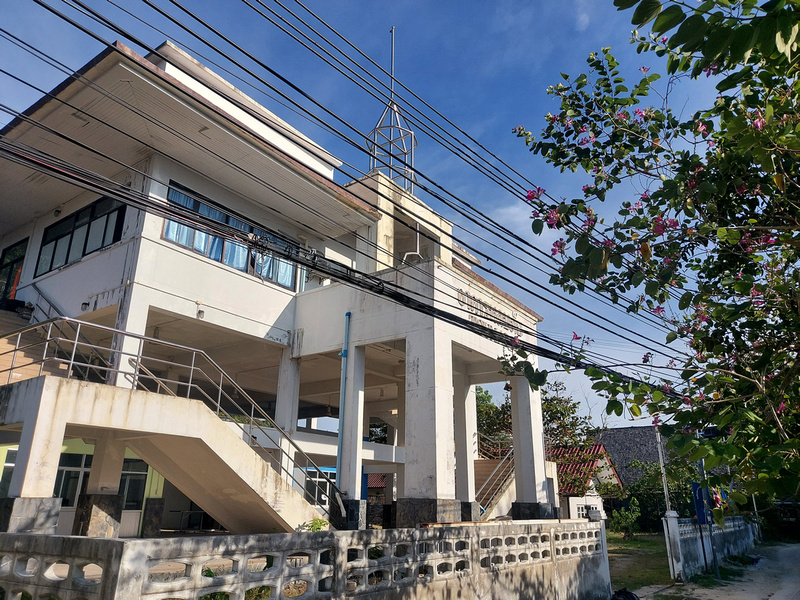 The island has tsunami evacuation signs everywhere, as do most places in coastal Thailand now. 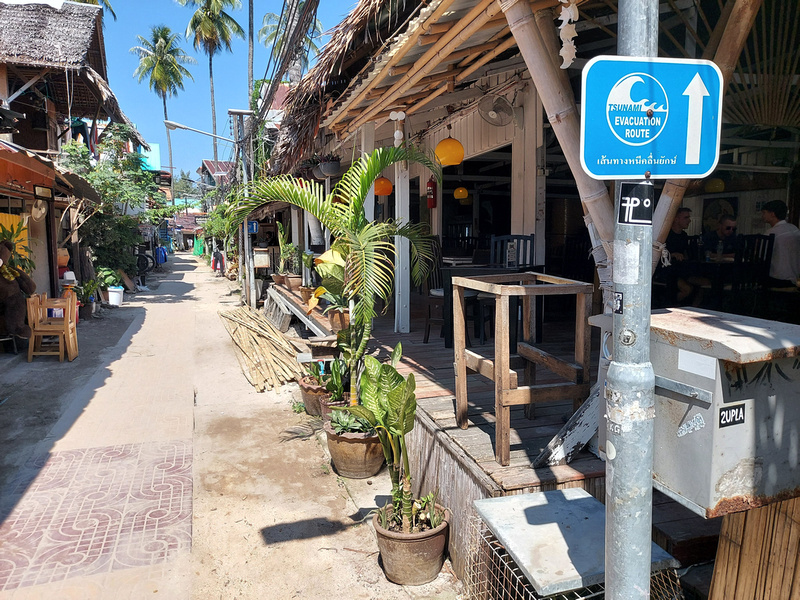 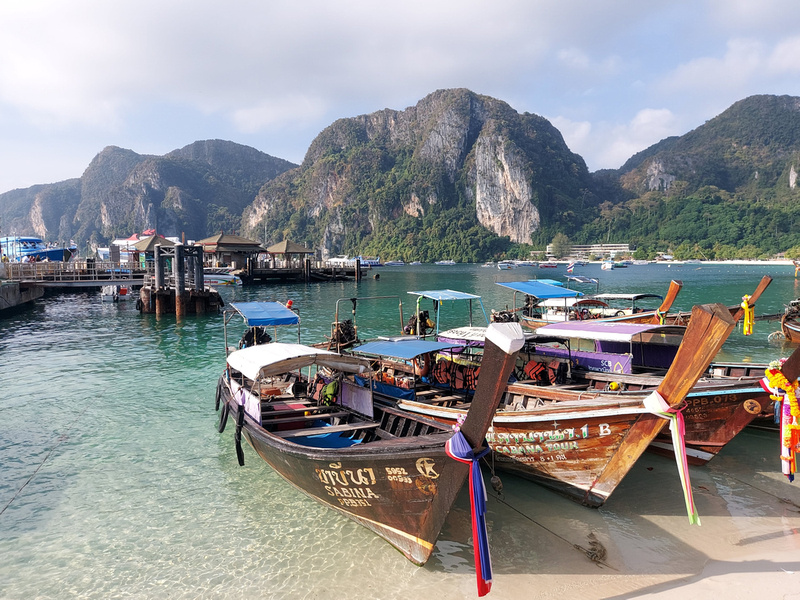 Phi Phi Don has loads of onward travel options for the islands of the Andaman Sea. After the confined party atmosphere of Phi Phi Don, I was looking forward to getting to the the bigger and laid-back island of Koh Lanta.