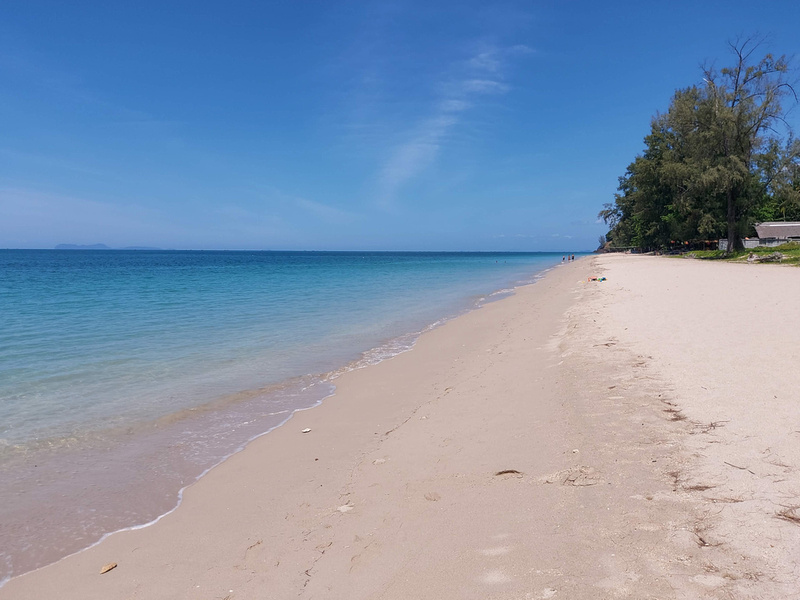 Riding from the port to my hotel I couldn’t help but smile as I sat in the back of the motorbike-tuk-tuk. It felt good to be back in Koh Lanta.

I had just arrived from the tiny island of Phi Phi, and I was in Phuket before that. Phi Phi feels claustrophobic if you don’t party, while Phuket is so big that you can forget you are on a tropical island in some places. Koh Lanta has a good balance of being big enough to have enough amenities while being relatively quiet. Koh Lanta felt more laid-back than the previous two islands I had just come from. Maybe I was put at ease by the lady tuk-tuk drivers of Koh Lanta, who make a nice change from haggling with tuk-tuk mafia men in Phuket. 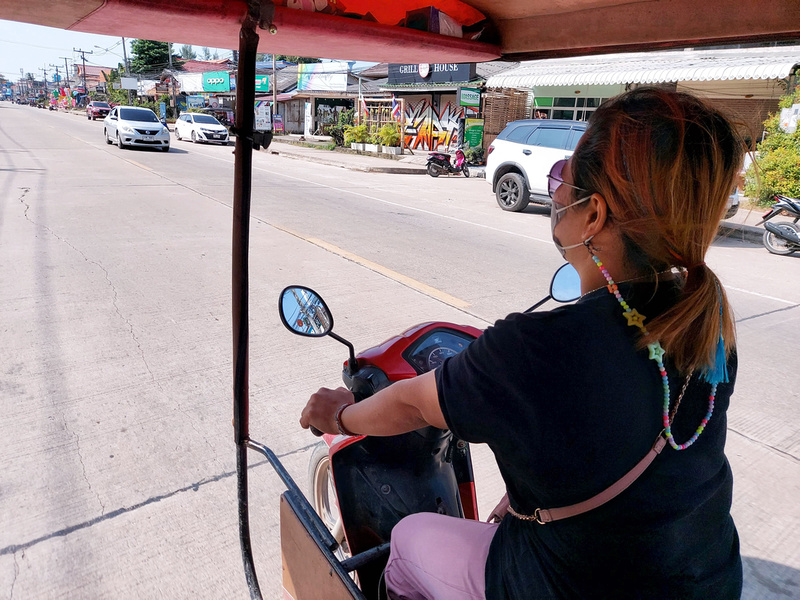 Ko Lanta is a group of islands that form a district in Krabi Province. The islands of Ko Lanta resemble Phuket in a way, in that they look like a peninsula off the mainland rather than an island far out to sea. The difference between Phuket and Lanta is that Lanta isn’t connected by bridge to the mainland (yet).

most of the action is in Ko Lanta Yai, to the point that most people who refer to Ko Lanta are referring to this island. For this post, any reference to Ko Lanta is about Ko Lanta Yai unless otherwise stated.

I was last in Ko Lanta in 2008, which was long enough to not really remember much about the island. It didn’t help that I didn’t blog about it, so here I am recording my thoughts and observations from my visit in February 2022.

Ko Lanta is about 27 km in length, so it is not a walkable island. My plan was to stay near the busiest cluster of shops and accommodations on Long Beach and then rent a scooter for the days I wanted to explore. 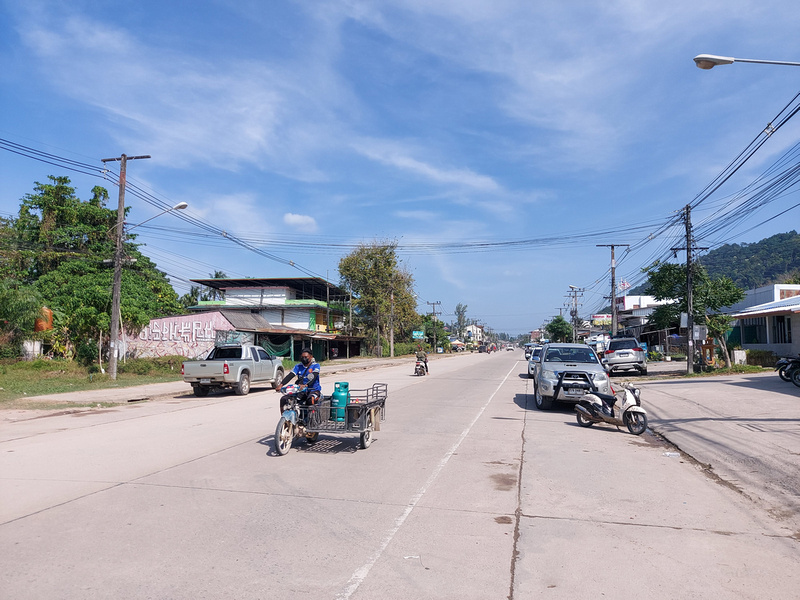 I booked into a guest house near enough to the beach to not pay beachfront premiums. The beach was about 10 minutes from where I was staying. 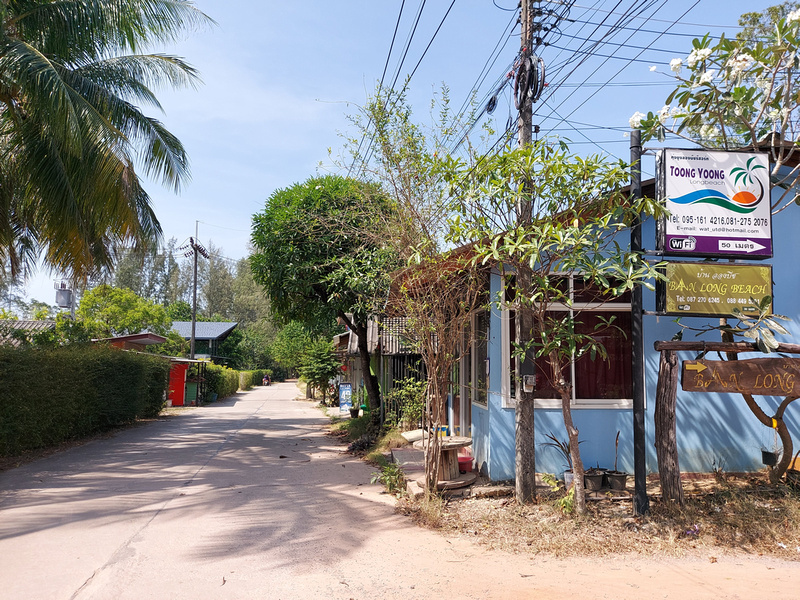 One thing that was noticeable was how undeveloped the beachfront is here compared to Phuket. Walking along Long Beach the landscape is still mostly trees, with beachside accommodation discreetly hidden behind the greenery. 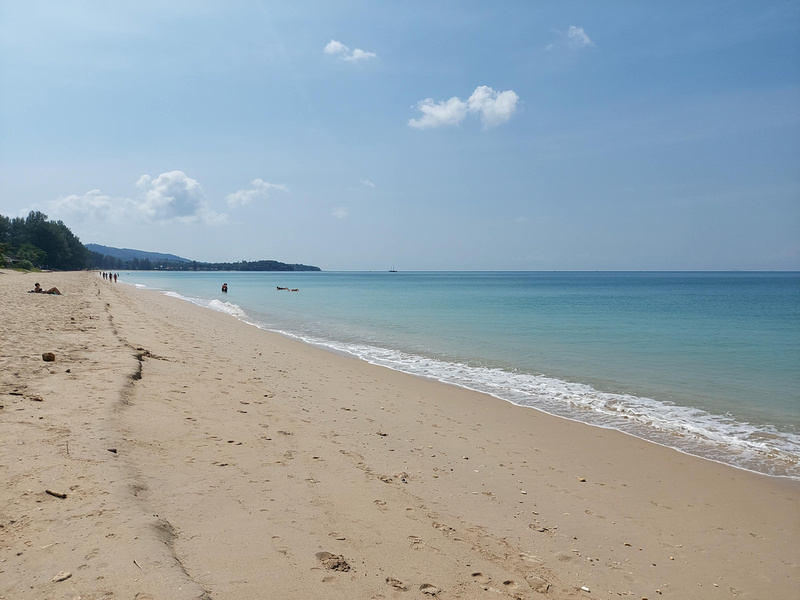 The beach sand here isn’t as good as the best soft and sandy beaches in Phuket, but that is a high bar. And really, are you going to complain about a beach that looks like this? 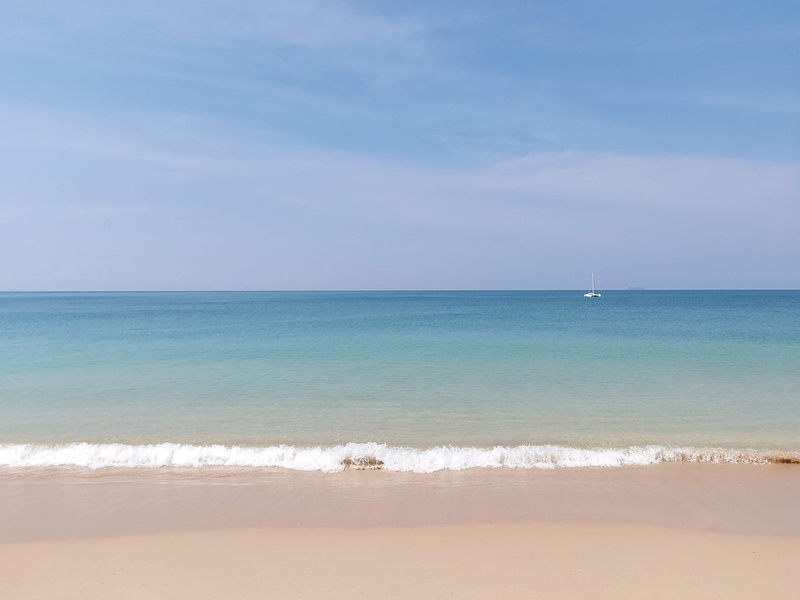 Lanta is big enough to have 7-Elevens but not McDonald’s. Not that I care if there is a Macca’s or not, but I just found it strange that there was one on Phi Phi and not here. Maybe there will be soon. I do love a 7-Eleven though, so there will be no badmouthing of the 7-Elevens here. 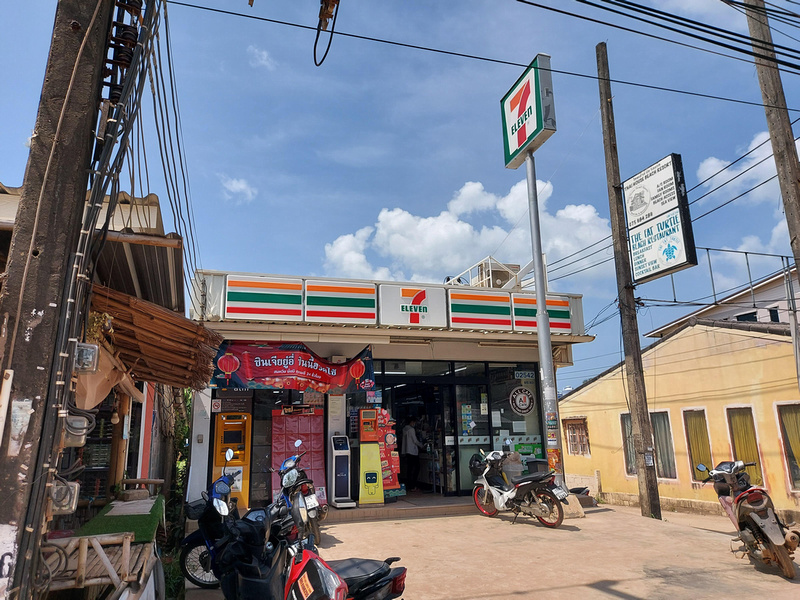 The population of all of Koh Lanta is over 30,000 according to the most recent updates, so it is not exactly a one-horse town. I saw some cows and a horse, which reminded me of a friends story about horseback riding in Koh Lanta that I had read recently. 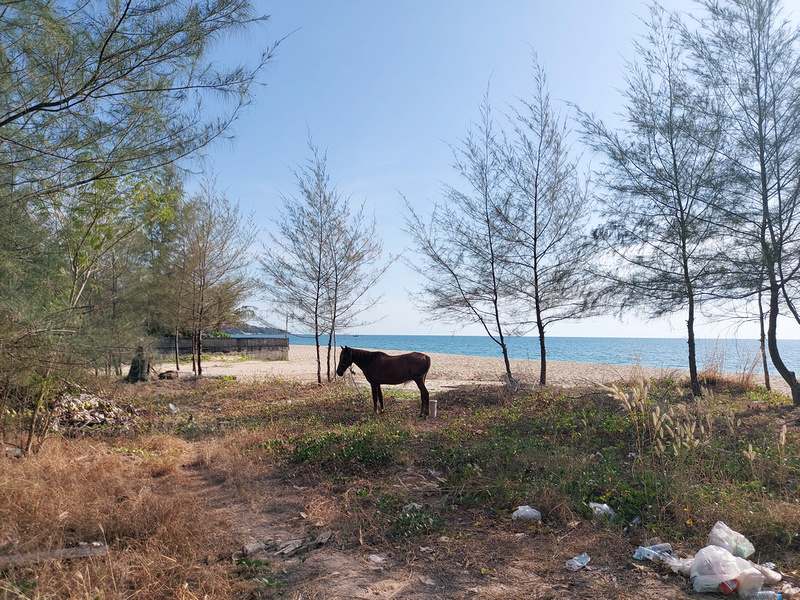 Closed for covid, and maybe for good?

The “notes” on Nomadic Notes are trip reports rather than guides, and after seeing the devastation of the pandemic closures I’m glad to not be in the guide business. I saw lots of travel blogs proclaiming to be the ultimate guide to Ko Lanta, but after seeing Ko Lanta in 2022, they will all need a rewrite. 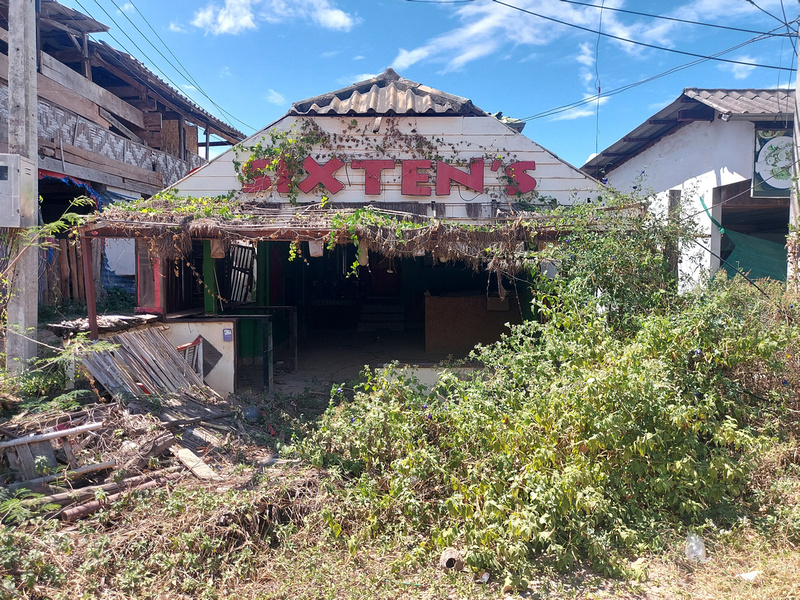 I was staying in an area of Long Beach where there were many guesthouses and hostels, and the kind of bars and restaurants that you would find in such a travel scene. Many of the places were closed, so it was a depressing site to wander around and see the remnants of what must have been a vibrant travel scene. Some places were listed on Google Maps as permantely closed, while some places were temporarily closed – either for the season or just holding out until visitor numbers returned to a level that can sustain a business operation.

The cool thing about Ko Lanta is that it has an old town. 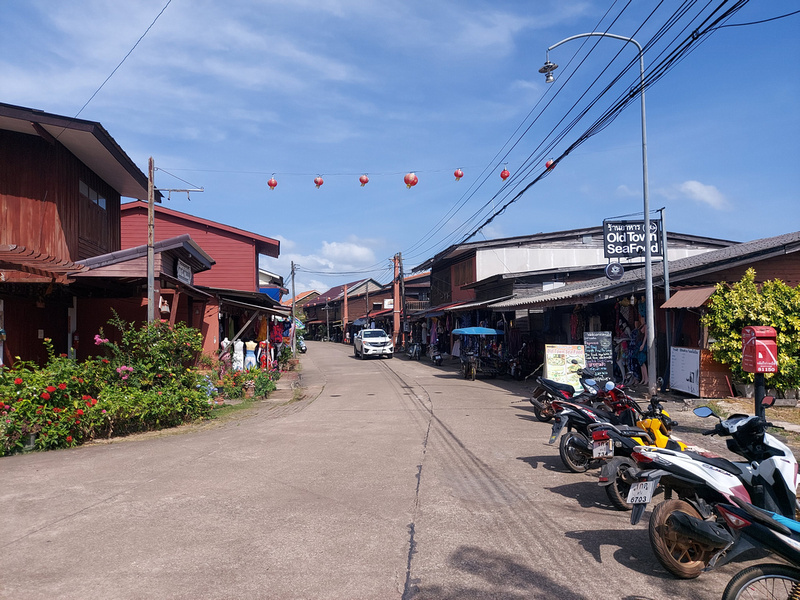 The town is to the south on the non-beachy side of the island. It is a fishing port, so there is no need for a beach, and its lack of a beach is what has saved it from becoming overwhelmed with tourism. 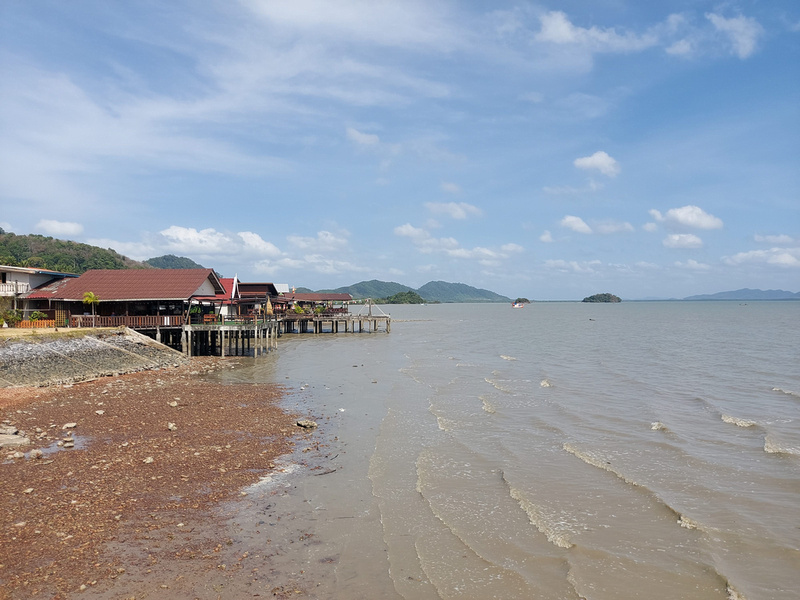 That’s not to say it’s not touristy. Most of the old wooden houses on the main street have been given over to some form of tourist enterprise, but it is not overwhelmed with people. Again, this might has been due to the country only having reopened. 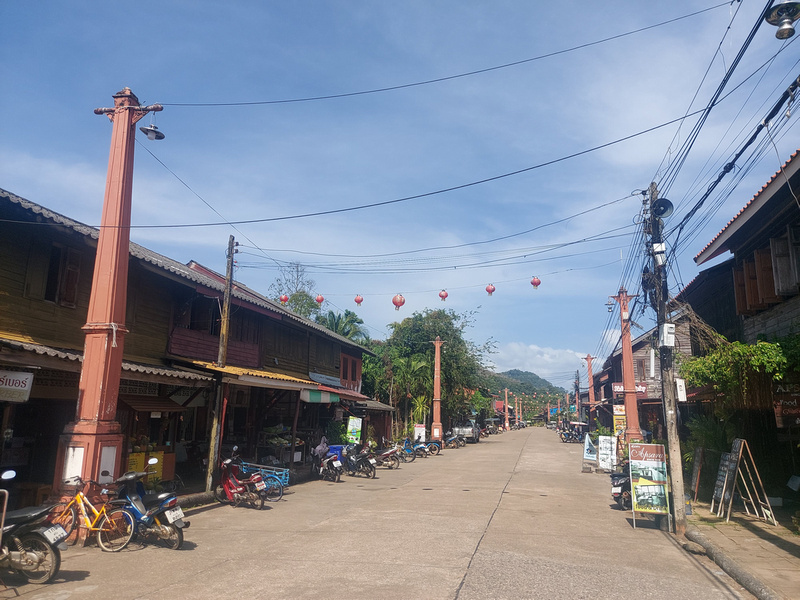 There are so many appealing little places here so I just a random place for a coffee and snack. 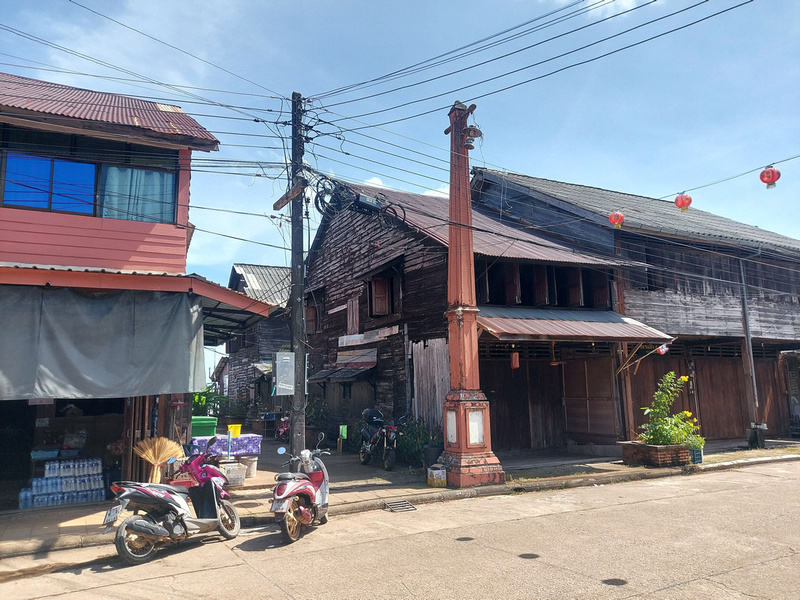 Half the fun of visiting the old town is the ride there. The roads are quiet and in good condition, so it’s a good place for scooter riding. 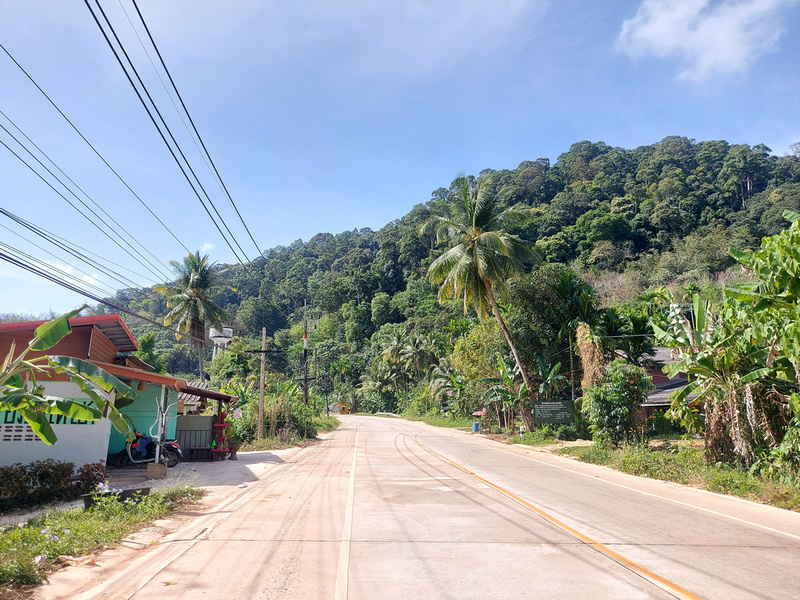 My main mission for this trip was to chill by the beach and find cool cafes to work in. I hit the jackpot within an hour of being here when I went for my first beach walk. I saw a building on the beach edge that looked promising, and it turned out to be Escape Cafe. 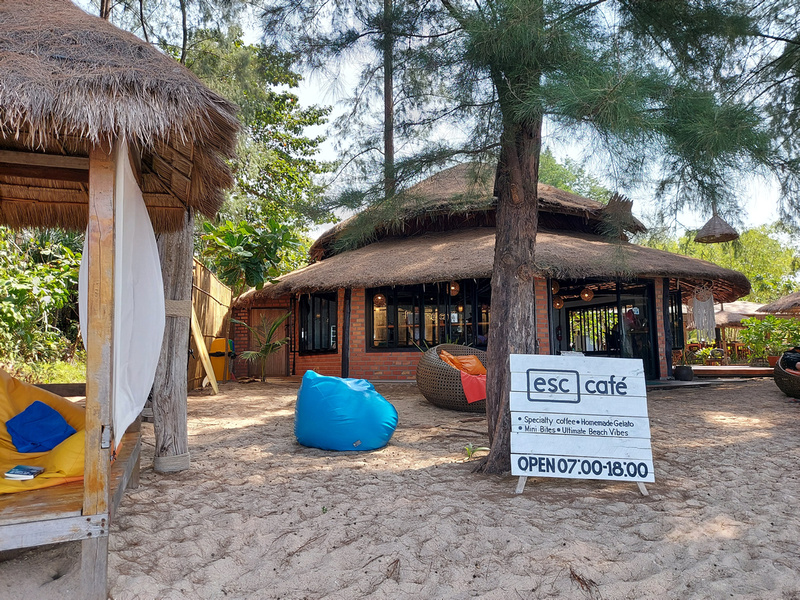 Not only was it in a good location, but they also serve proper lattes, so this became a daily visit for me. It helped that they open at 7 am, as I have no problem getting up with the sun in the tropics. 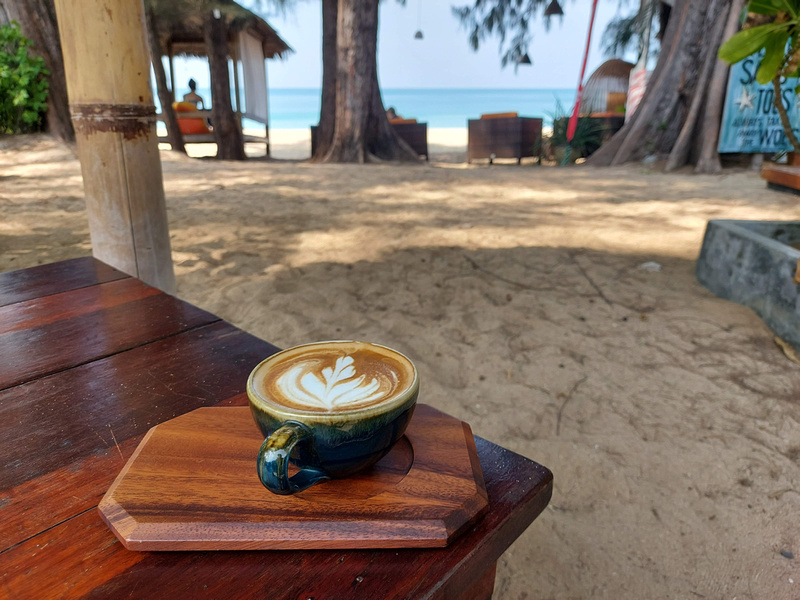 Another great place for coffee and working is The Glass House. It is billed as a co-working space, though at the front it has good cafe vibes. 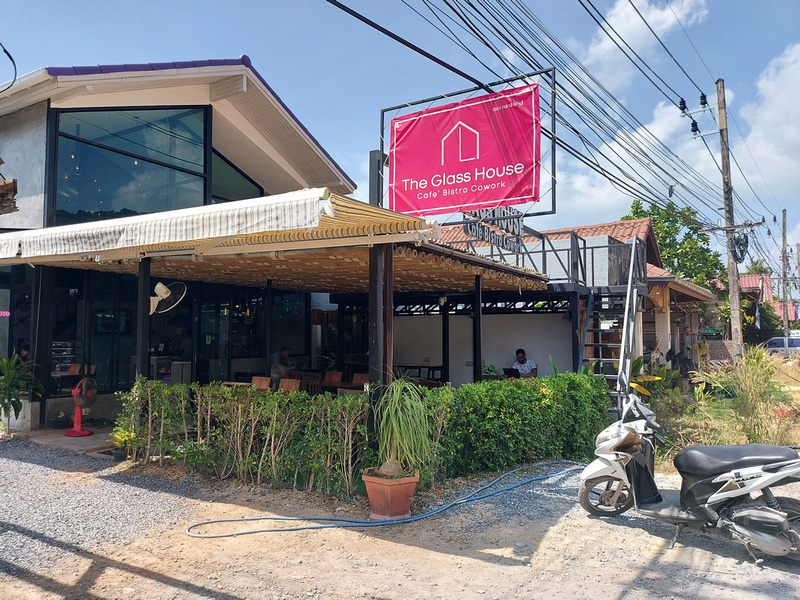 I ended up at Escape and Glass House every day because they were within walking distance from where I was staying. Further south (a scooter ride away) I visited Smoon. 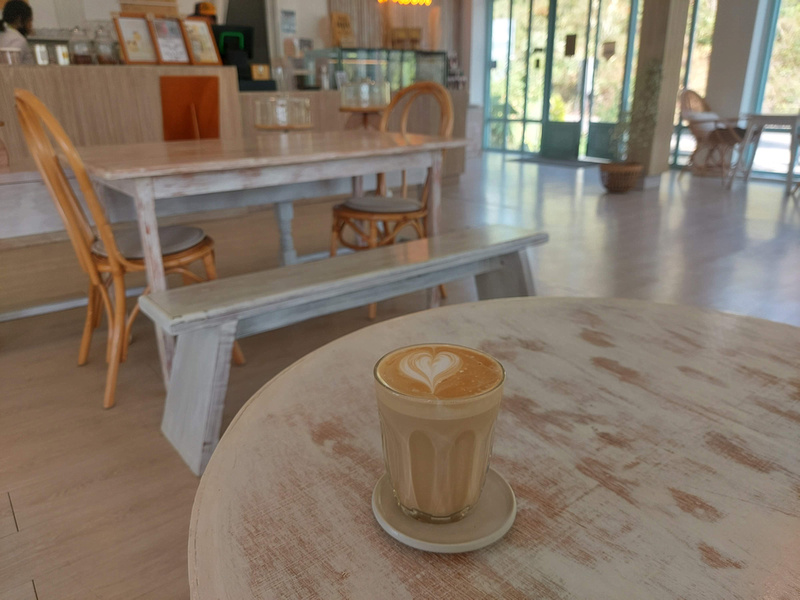 There are also the bamboo beach cafes I dropped into whenever I needed a break from the beach walking.

As so many places were still closed, I just went to whatever was open. Something I wasn’t expecting to find was this roadside Isaan shack. 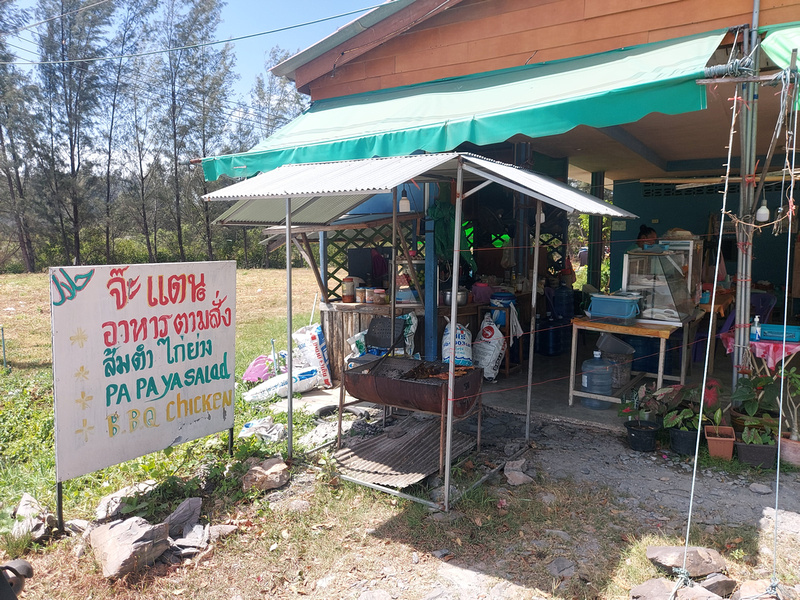 I am a sucker for Isaan grilled chicken, spicy papaya salad, and sticky rice. 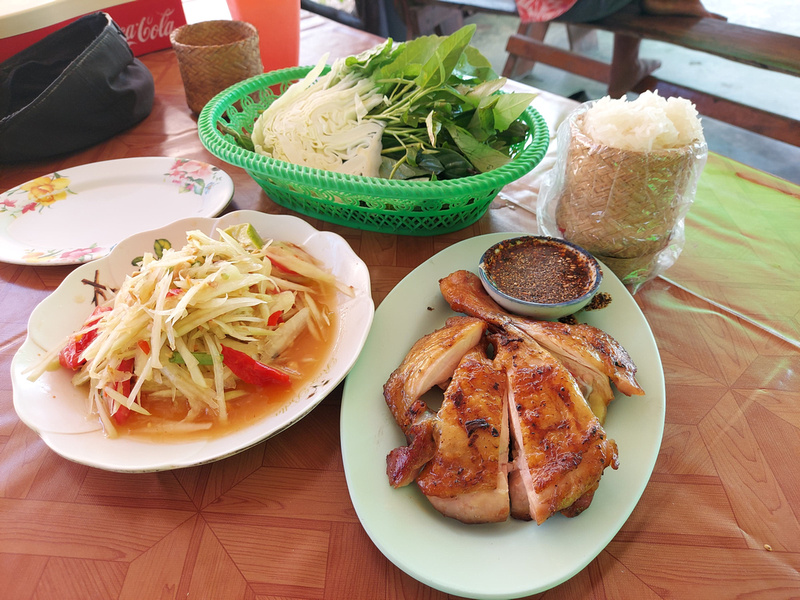 As much as I love Isaan food, I was on the lookout for a specialty of the south. Khao Mok Gai is a Thai Muslim biryani, and it is something I always try in the south. My favourite Khao Mok Gai is in front of a 7-Eleven at Chiang Mai Gate Market. It seems crazy that the best one I’ve had is so far north, and it has sent me on a quest to find “the best biryani in Thailand”. It’s a quest I will never finish, but I will be happy to eat way through Southern Thailand to try and find out.

Anyway, I was driving around looking for the telltale signs of Khao Mok Gai. I saw a restaurant with Muslim ladies with a big pot out the front, which is filled with rice and chicken pieces. Sure enough, I found what I was looking for. It didn’t take the crown from the Chiang Mai biryani, but it was a great meal. 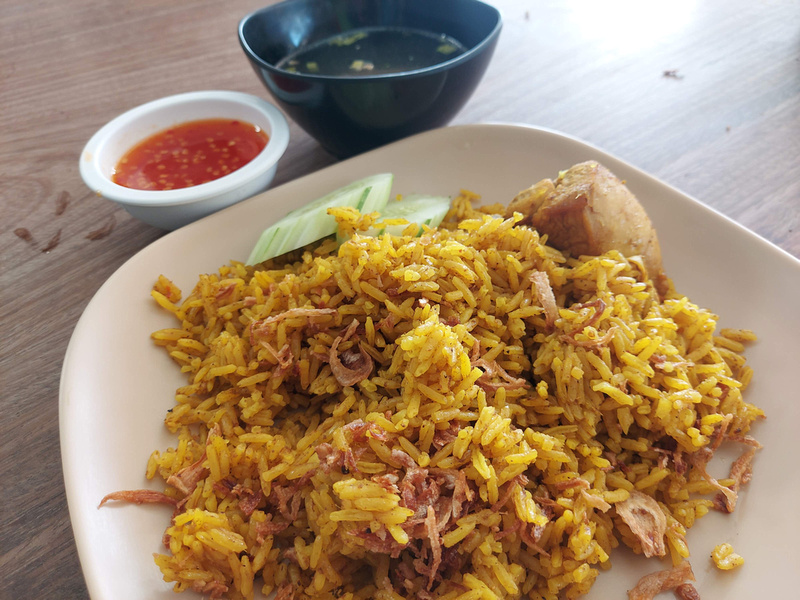 I had an unexpected crossing of paths with fellow travel bloggers Kash and Sabrina. Like we literally ran into each other at the same apartment we were all staying at. I was entering and they were leaving, so it was a great surprise. Later on I met them at a place nearby called Kwan’s Cookery, and they were joined by YouTuber Karl Watson (here is his video including Koh Lanta).

My culinary tour of Thailand continued because Kwan specialises in Northern Thai cuisine. Eating in a group meant being able to sample different dishes, and this place is definitely worth a visit. 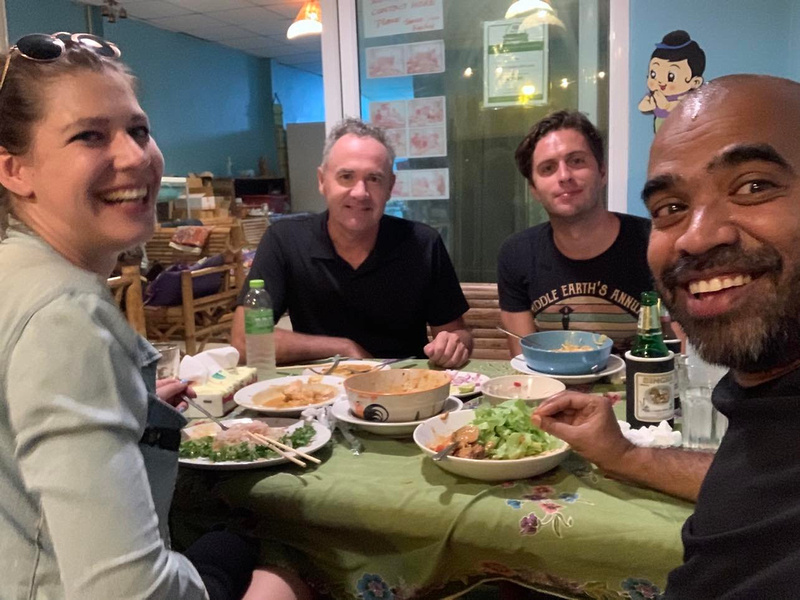 For western food I enjoyed the Kraken Lanta burgers. 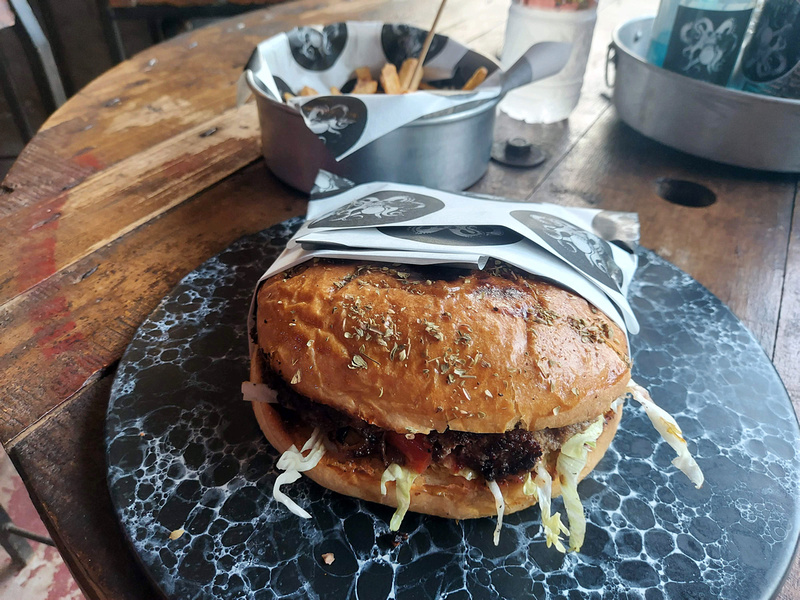 Ko Lanta can be reached by boat from Phuket, with some boats stopping at Phi Phi. You can reach most of the islands of the Andaman Sea from here, so it makes for a good island to start from. 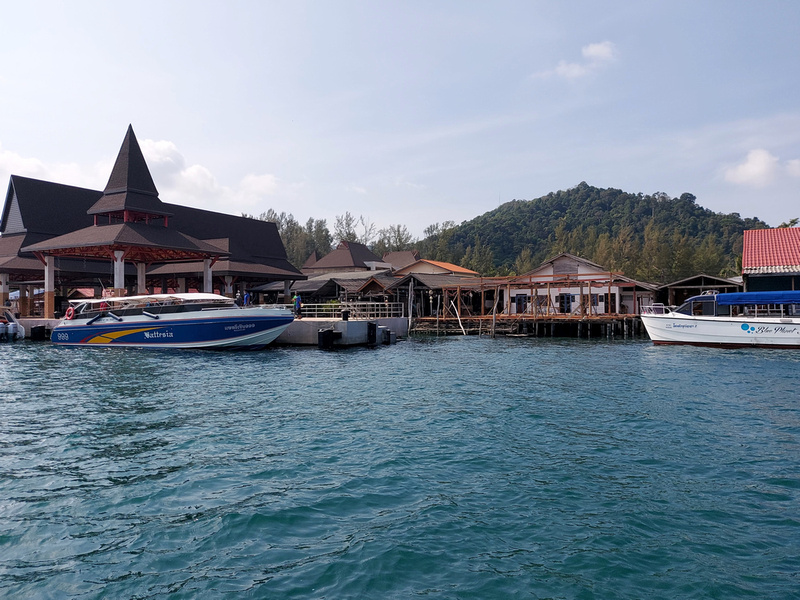 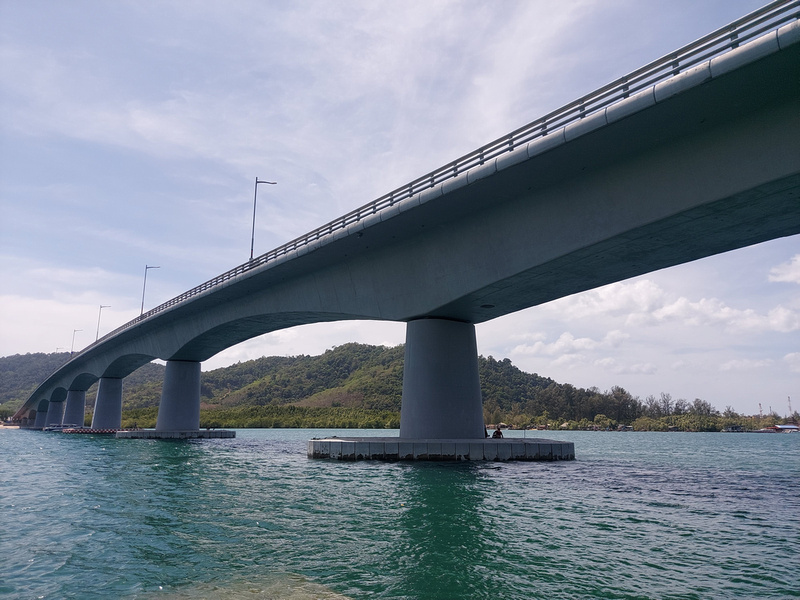 There is no airport here, and it is unlikely that there there ever will be a Lanta Airport. The nearest airport is Krabi Airport.

I saw bus stops along the main north-south road of the island but I didn’t see any public buses. 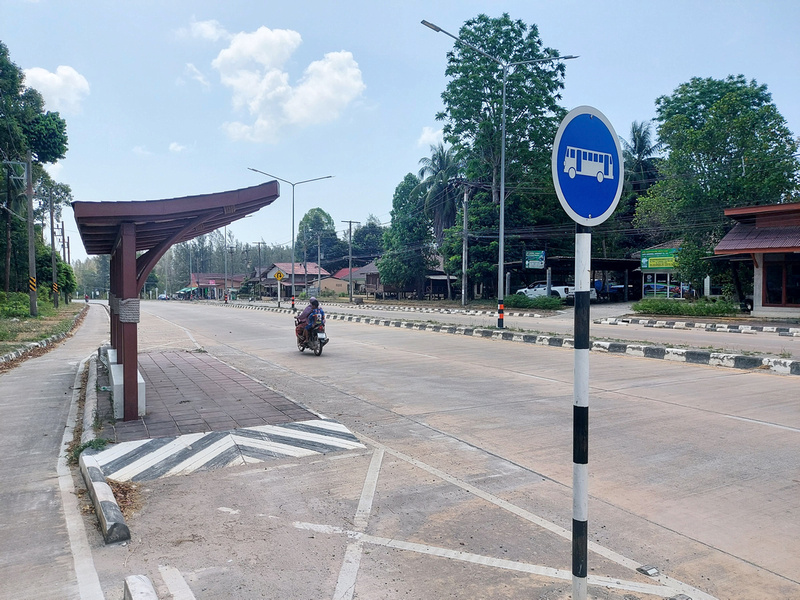 From Koh Lanta I got another boat to Koh Ngai.