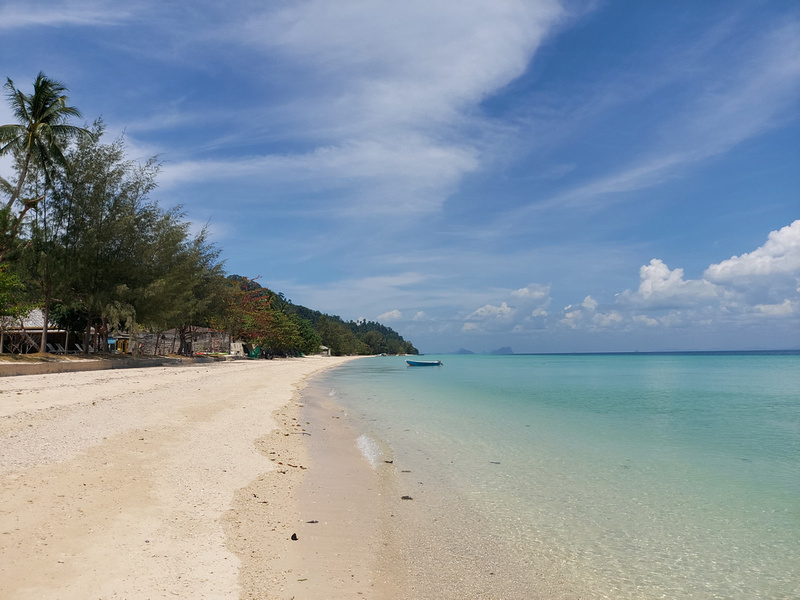 Koh Ngai is an island in the Andaman Sea in Southern Thailand. The island is part of Krabi province, but it is easier to get to from Trang.. You are more likely to arrive here from another island than from a mainland port, so mainland provincial locations don’t matter once you are there.

Koh Ngai is one of a number of Thai islands in the Andaman Sea that stretch from Phuket to Koh Lipe. With so many islands to choose from you have to decide what island to visit if you have limited time. While researching where to go, I found that the recurring theme for Koh Ngai is that it is ideal for families and couples and that it’s expensive. As a single, budget traveller, these are not descriptions that make me want to visit in a hurry.

I couldn’t tell if it was a “couples island” or if it was something that one publication said, and then everyone else parrotted. Lonely Planet lists it as being “family-friendly” and “prime honeymoon territory”, so there is a prime source for such a label.

I’ve already been to this part of the world a few times before, and I’m also on a quest to stay on every habitable island in Thailand, so I had to come to Ko Ngai eventually.

I was in the region in February 2022, when Thailand was still dusting off the cobwebs from being closed for international travel during the pandemic. There were tourists about, but not at 2019 levels yet. I checked Koh Ngai on Agoda and found a room for under $20, so that was very reasonable for a single traveller who wasn’t looking to lounge by a pool all day. I scheduled a visit after my stay in Ko Lanta.

There are different speedboat companies that ply the coast, stopping at different islands on the way. Passengers have a sticker stuck on them to indicate where they are getting off. I was surprised to see so many people going all the way to Ko Lipe. 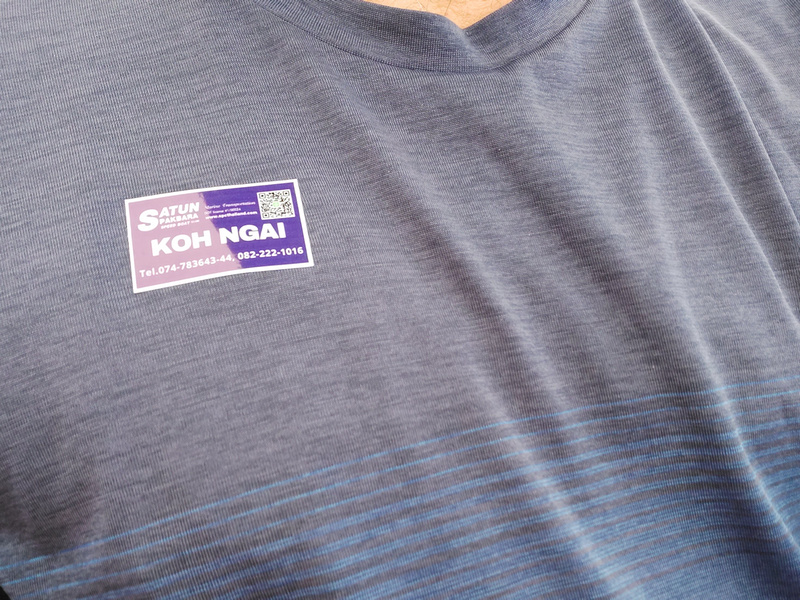 The speedboat I took goes near Koh Ngai, where it is met by a longtail boat that transfers you to the island. This saves time for the speed boat going to other islands, and it’s an enjoyable way to arrive at an island. I mean take a look at this view! 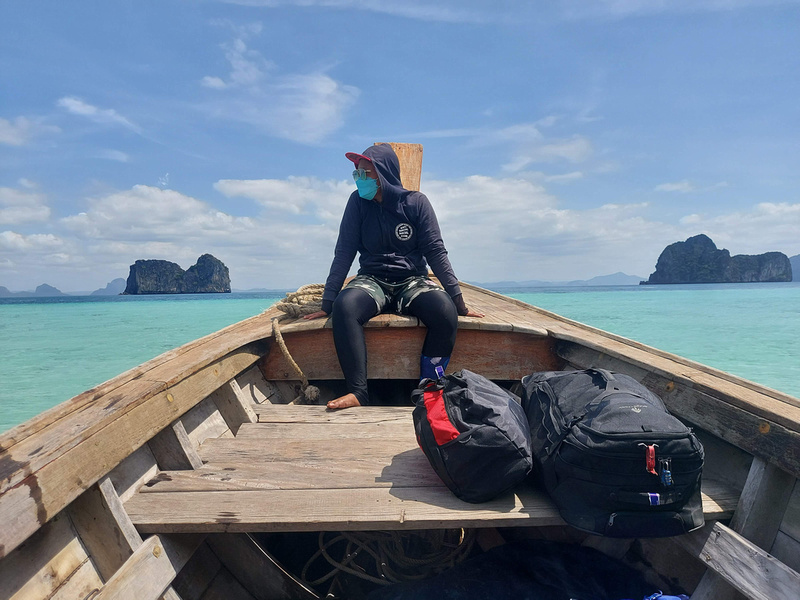 On a side note, I’ve never seen a Thai fisherman wearing fisherman pants. They are more likely to be wearing European football kit. This local boatman appealed to my inner goth with his all-black attire, and I no longer feel bad about wearing black t-shirts to the beach.

The longtail boat will drop you off at the nearest point to your hotel, and in my case, the hotel had its own pier. 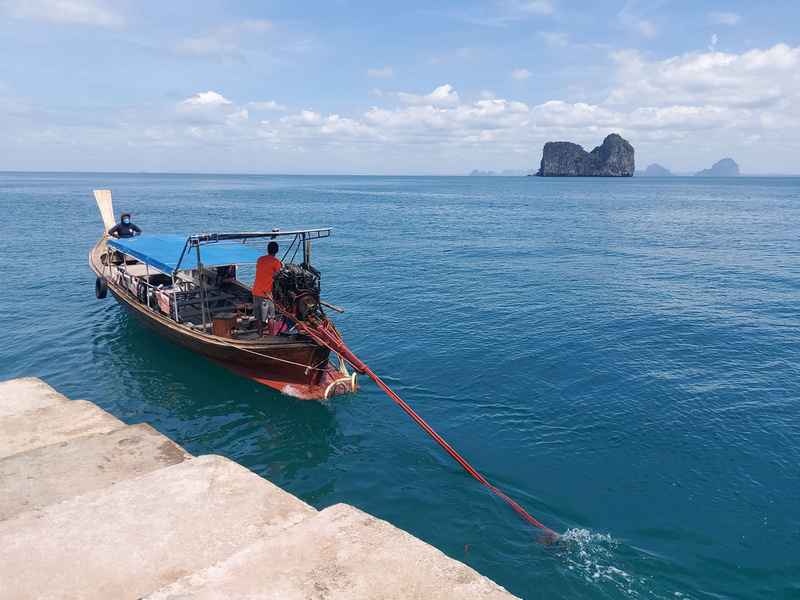 I was staying at Koh Ngai Resort, which is at the southern end of the island. This is the only hotel on this little cove of beach, and it has a nice pool area among coconut trees overlooking the sea. 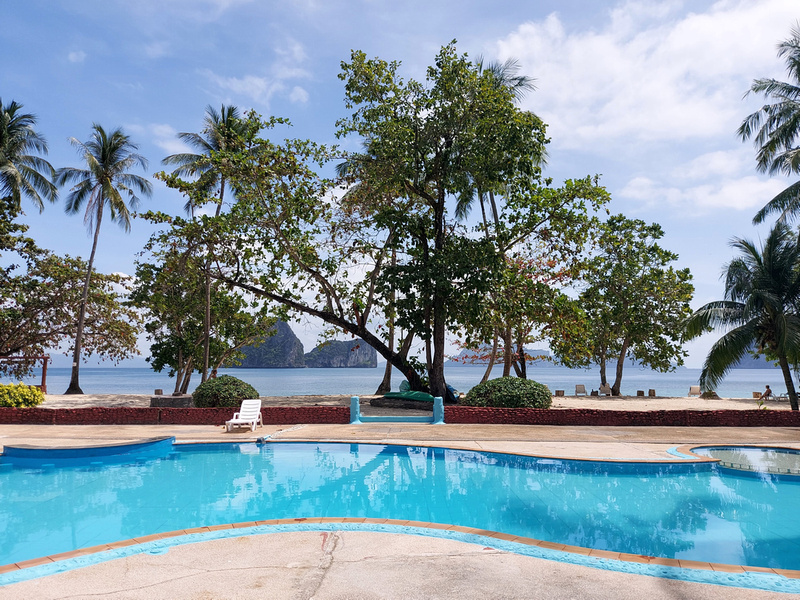 When I checked in there was a European couple on the same boat who just turned up without a booking,. They booked for a whole week, thus perpetuating the stereotype in my mind that this is an island for couples.

The hotel has its own beach and pool, but with nothing else to do I was going to get island fever pretty soon, so I made my way to the main beach. 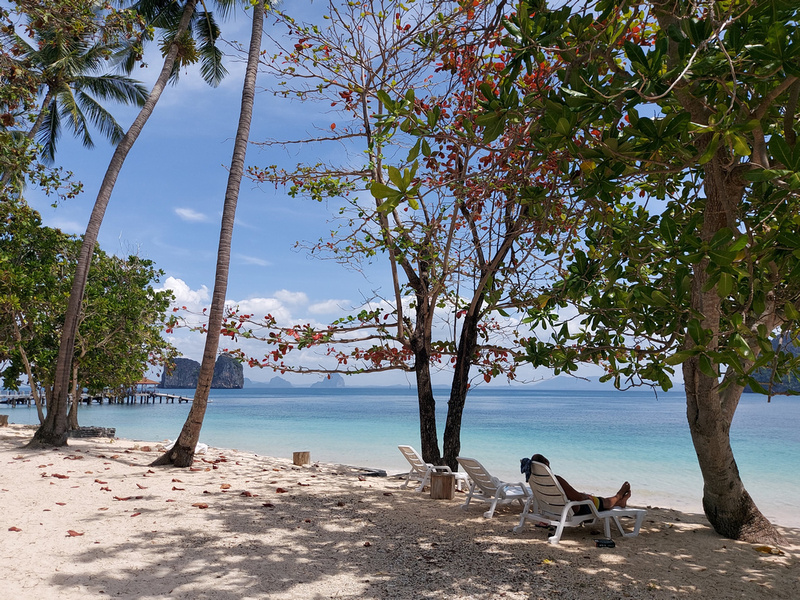 [A guest at Koh Ngai Resort who knows how to relax.]

Getting to the main beach involved a trek around a head of land that separates the southern end from the main beach. The walk involves walking on a rocky path along the water and then a jungle path with a rope to hang onto. I was wearing thongs (or flip-flops as the rest of the world calls them), so I was extra mindful not to slip and have a footwear blowout. 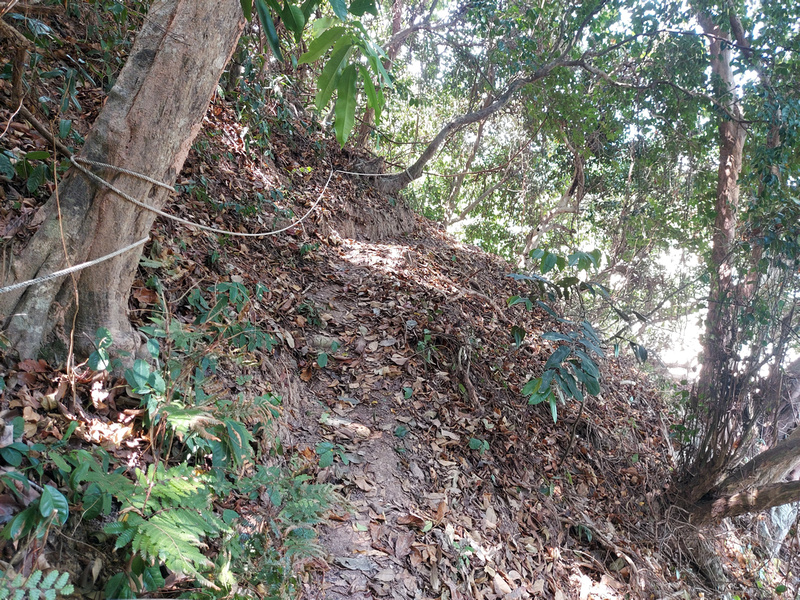 I emerged from the jungle to find the glorious main beach.

I was lucky to get this first impression at a perfect time of day. I arrived at midday on a cloudless day, and the tide was high enough to make the water that special kind of tropical blue. 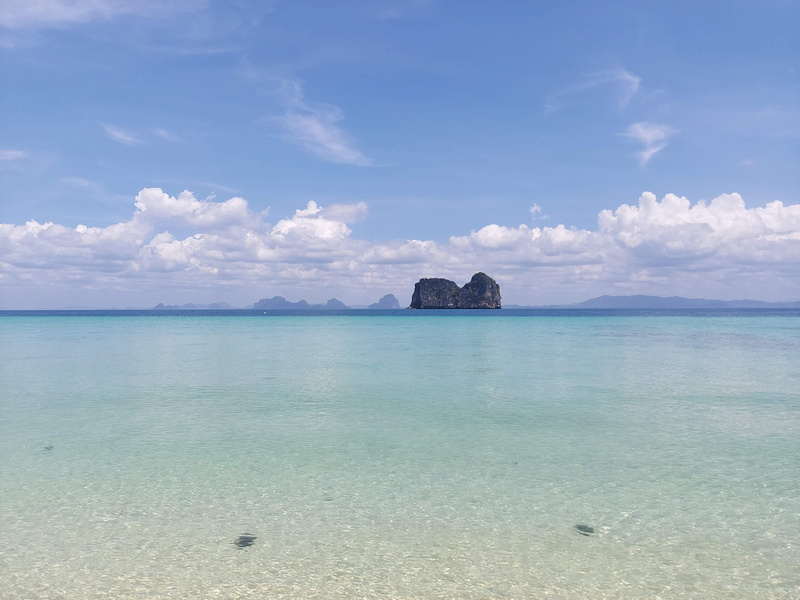 This was still early on in the great reopening of Thailand, so many of the hotels were closed. 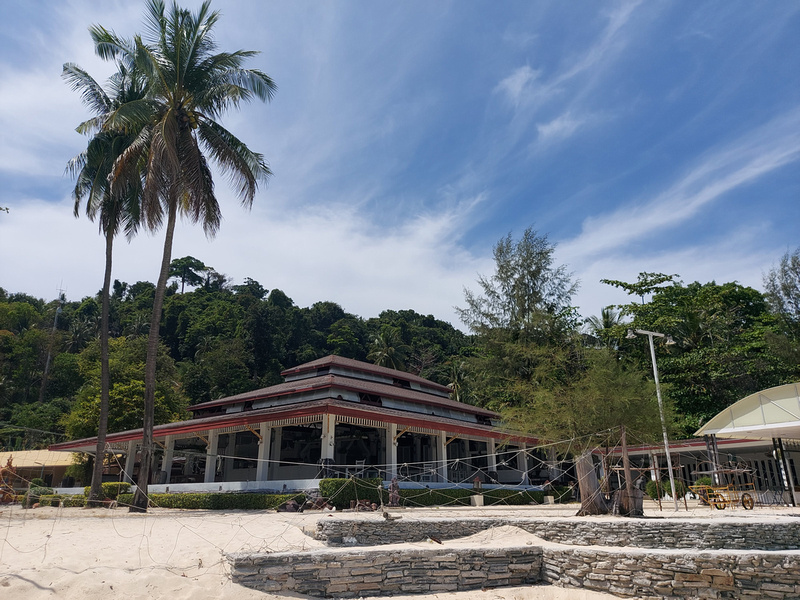 Even things like getting a massage weren’t going to happen on this trip, as such places had not reopened. I mentioned in my trip report for Phi Phi how the masseuse I met there was from the Isaan region in Northeast Thailand. No one is from Koh Ngai, so it will take some time before workers return from their home provinces to fill service jobs in the tourism sector. 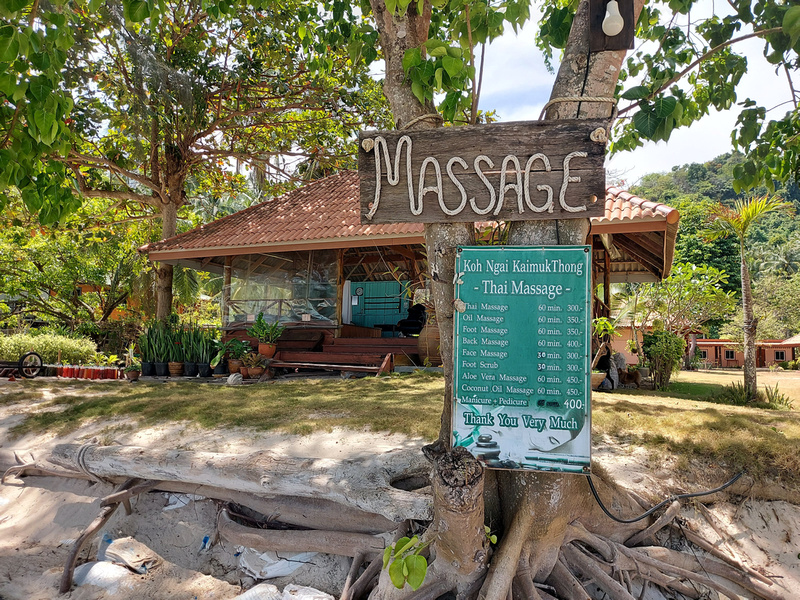 Considering that it was a literal trek to get here from my hotel, I figured I will have lunch and hang out here for the day before returning to my hotel. Most of the shops were closed, so I ended up at the only non-resort restaurant that was open. I don’t remember the name of the place, but if you go to Koh Ngai you’ll probably end up there too. The proprietor was happy to see visitors, and I made fast friends with a local beach dog having a siesta by my feet. 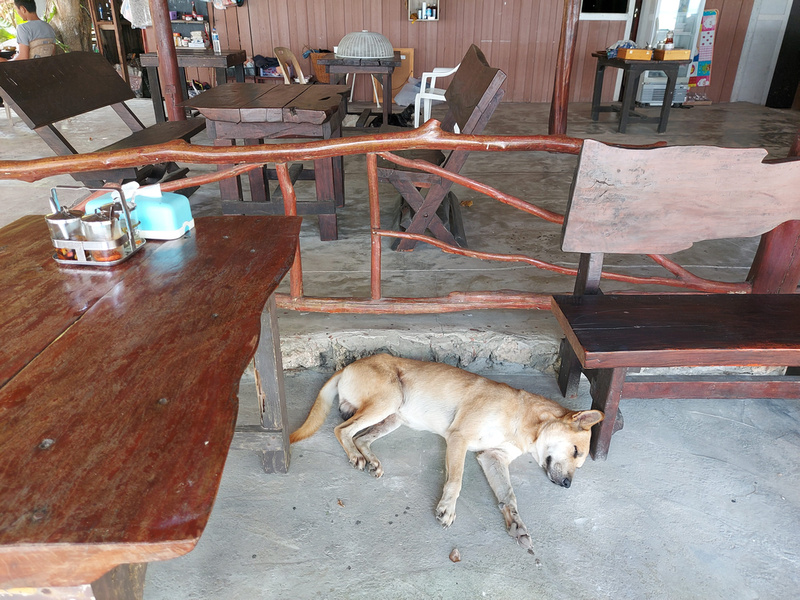 I did a lap of the beach, walking as far to the end to see what else was there. The island is so small that there are no roads and thus no motorbikes. Everything is delivered by boat to the beach. 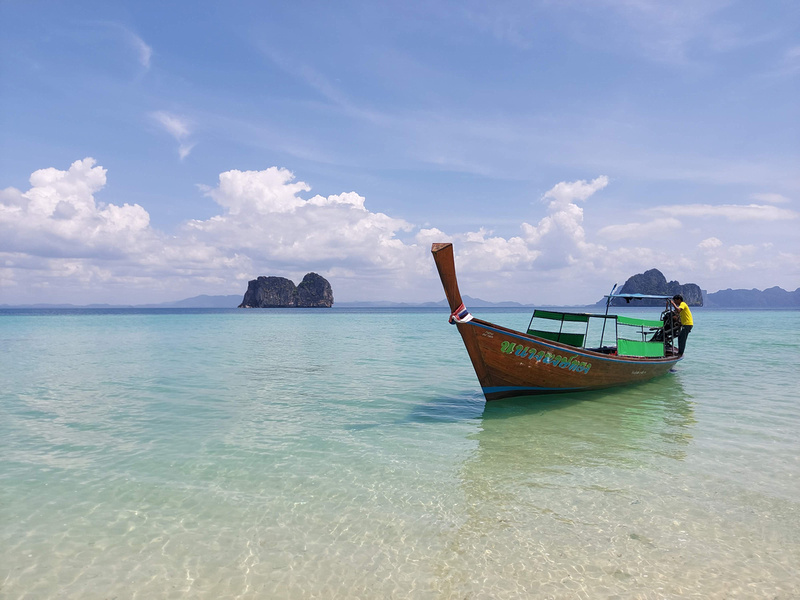 A tour group arrived from another island for their lunch break on the beach. Each island offers different island tours, such as visiting 4 islands in a day with snorkelling at different spots. This is another way you could say you’ve been to Koh Ngai without actually needing to stay here. 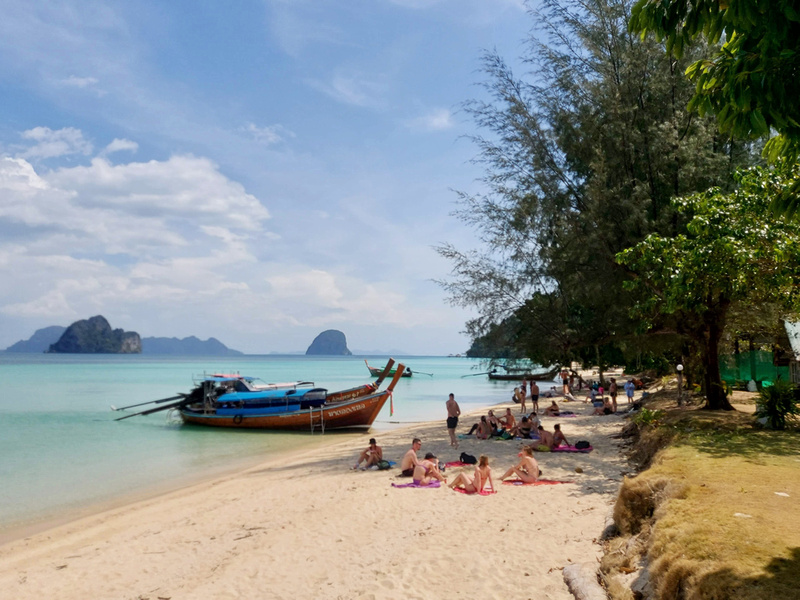 After walking the length of the beach I found there were no other beach cafes open. 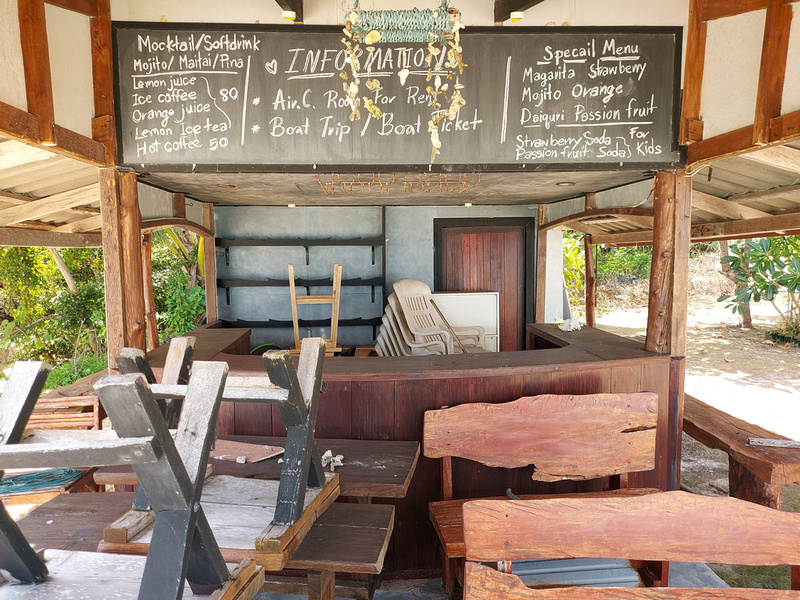 With nowhere else to go, I ended up back at the same place I had lunch. I might come across as a Melbourne coffee snob in some of my posts, but sometimes I am equally as happy just to have an instant coffee with my feet in the beach sand. 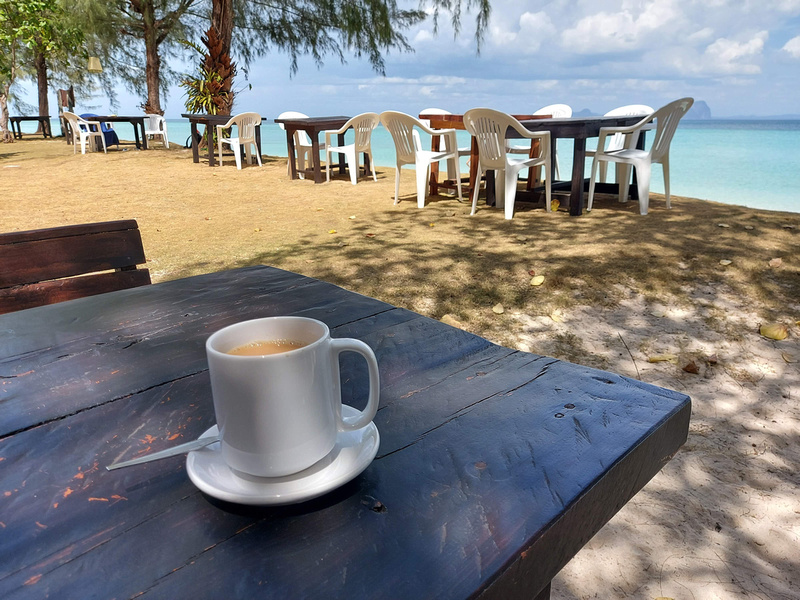 Ko Ngai is famous for not having much to do even in the busiest of times, so I was seeing it in unusual times. It is similar to neighbouring Koh Kradan, though I think Kradan has the edge with better sand and a few more budget travel options. That said, it is a beautiful place in the world that I’m glad I got to see. 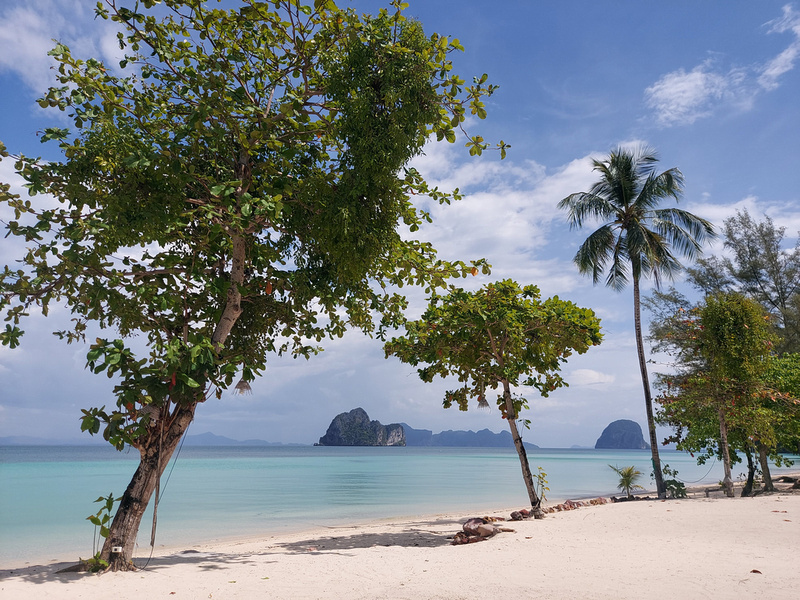 My island hopping continued from Ko Ngai, with my next island being Koh Mook. 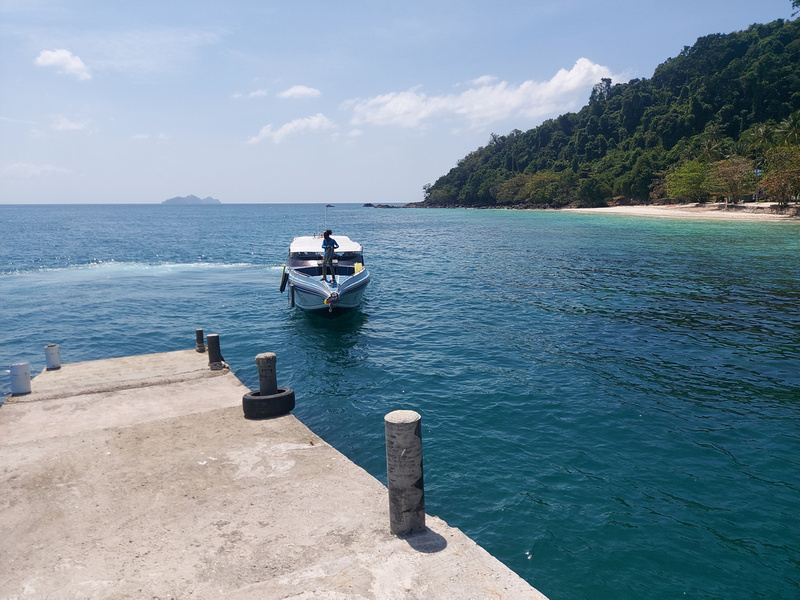