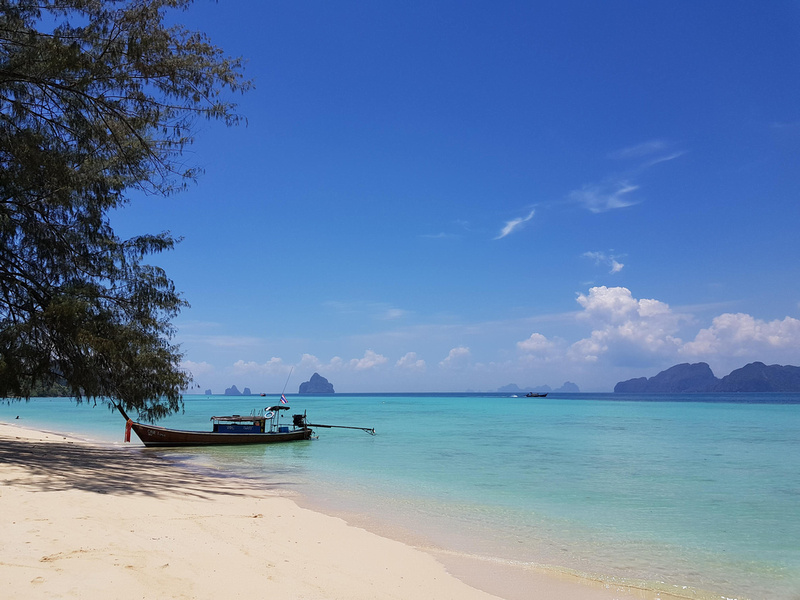 Koh Kradan is an island in the Andaman Sea off the coast of southern Thailand. Out of all the islands I’ve visited in Thailand, Kradan might be the most idyllic. Of course there is no such thing as the perfect island, but Kradan ticks a lot of boxes for what would make a tropical island paradise.

Kradan is part the Trang Islands group, and I ended up here mainly because I was looking for an island to visit after getting the train from Bangkok to Trang city. I didn’t know anything about the Trang Islands before I went, so in the end I picked Kradan for its beach.

The boat from the mainland to Kradan took about 45 minutes, via Koh Muk. That island looked great from our short stop, which had me thinking that I need to be coming back to do some island hopping.

As the boat got closer to Kradan the water colour began changing into the shades of blue and green that are most associated with tropical island holidays. 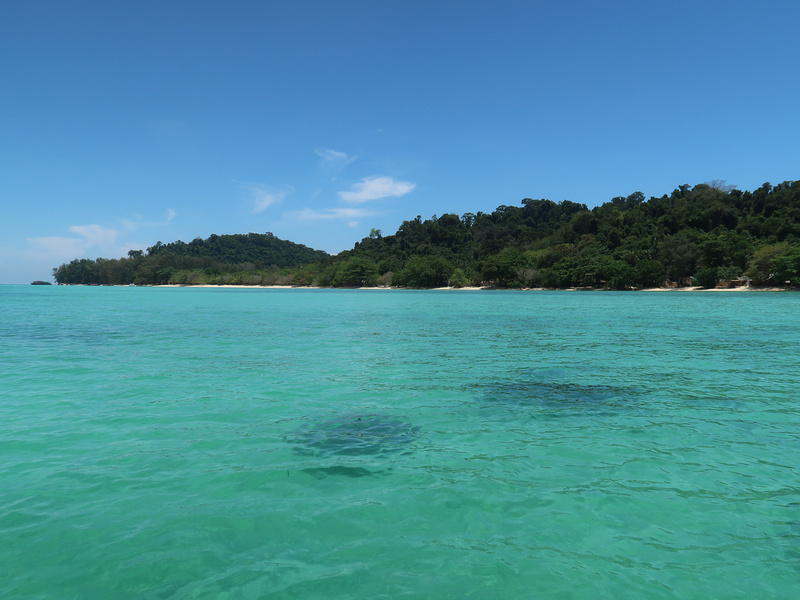 When the beach came into view I was happy to see that beach was exactly what I was hoping for – along stretch of white sandy beach with crystal clear water. This is the stuff that tropical island dreams are made of. 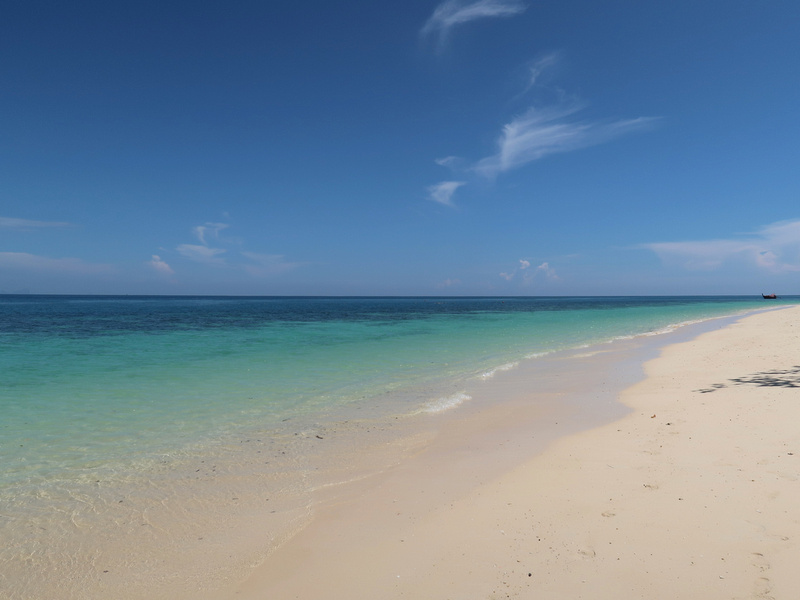 And it’s a good thing that the beach is so soft and sandy, as that is the first interaction you’ll have with the island. There is no pier here so you have to jump out of the boat onto the beach. The boat driver will drop you off in front of your hotel, so no need to worry about lugging your bags too far. 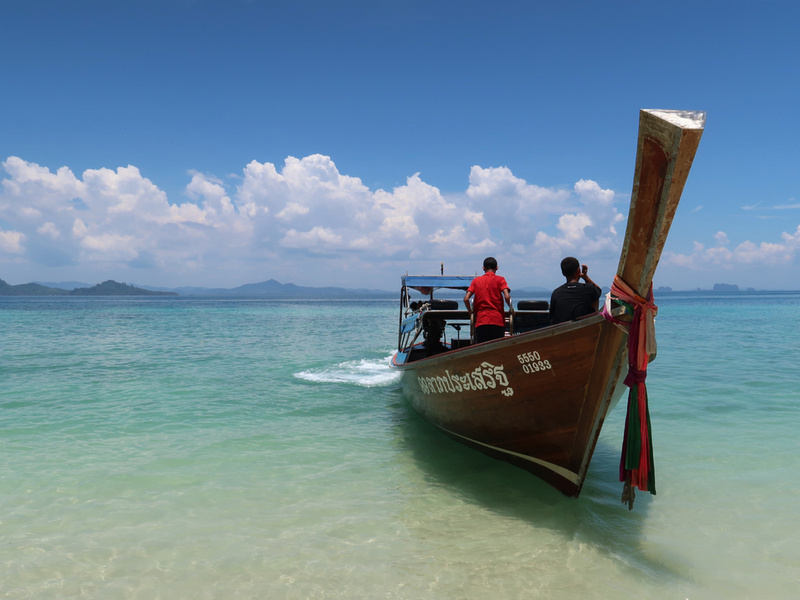 After checking in I headed straight to the beach to do my favourite beach activity of waking in the sand along the water. In the distance you can see the island islands of Trang province, adding to the already stunning scenery. 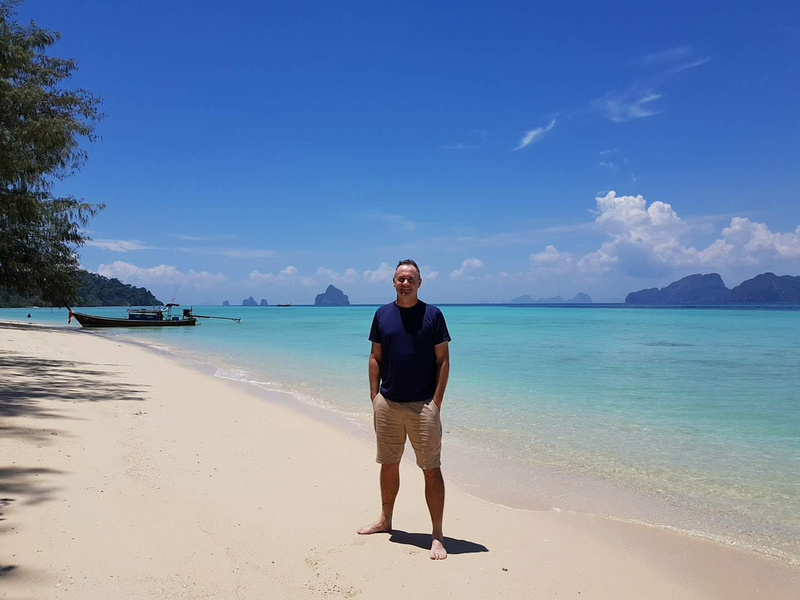 There is not much to do on Kradan as it’s only a few kilometres long with no township or pier. The island is mostly national park with a row of hotels clinging to the strip of beach.

There are no real roads here either, and the only motorised vehicles I saw was a tractor and motorbike being used by the national park office.

I had read that the beach gets busy during the day when tour boats from neighbouring islands come to go snorkelling on the beach. I had a vision of hordes of tourists pouring onto the beach like a cruise ship in Venice. Instead I saw two boats, and they were all in the same place. I’ve seen worse. 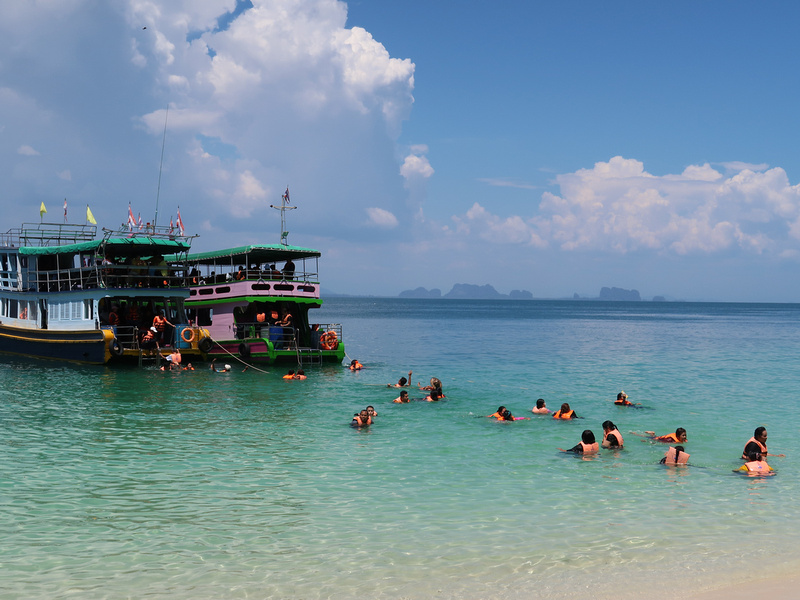 It helps that Kradan is just a bit out of the way to be convenient for the masses. If it was located closer to a bigger airport (like Phuket or Krabi) it would probably be overrun by now. As it stands it’s closest airport is Trang, which only has a few domestic flights. Kradan is no Maya Bay on Ko Phi Phi Leh, which had to close it was so overrun. 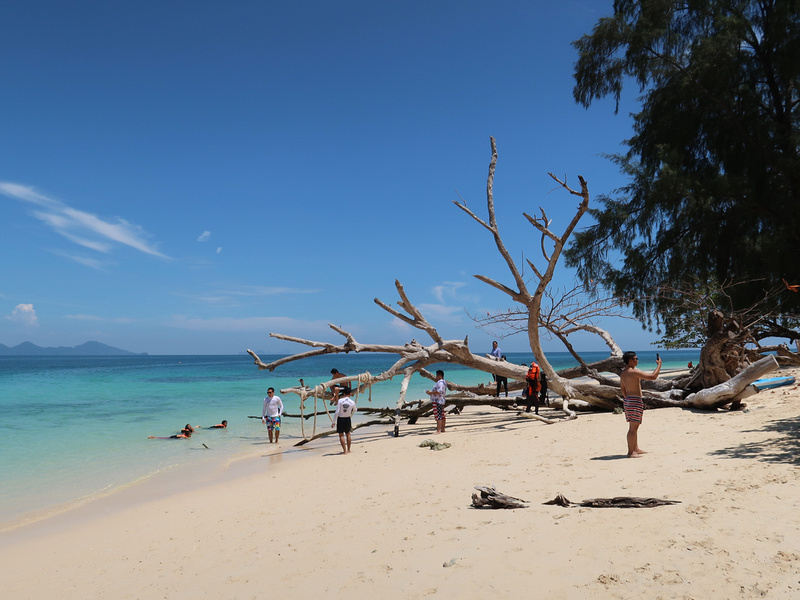 During the low tide the beach reveals a flat and rocky expanse. 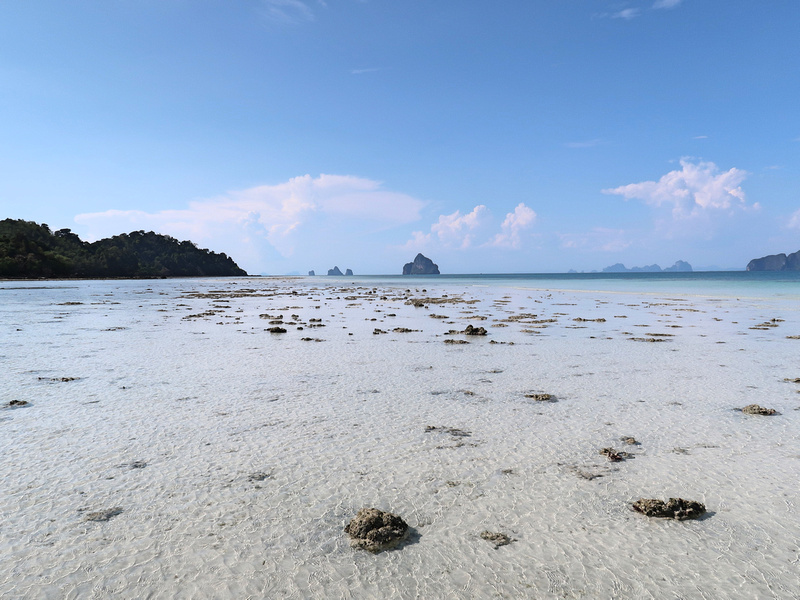 Island life economics and the lack of self-sufficiency

Being a small island everything is imported, and prices are generally twice the price of what is on the mainland. I saw this boat delivering lumber and some concrete pipes, which was hauled onshore by hand. 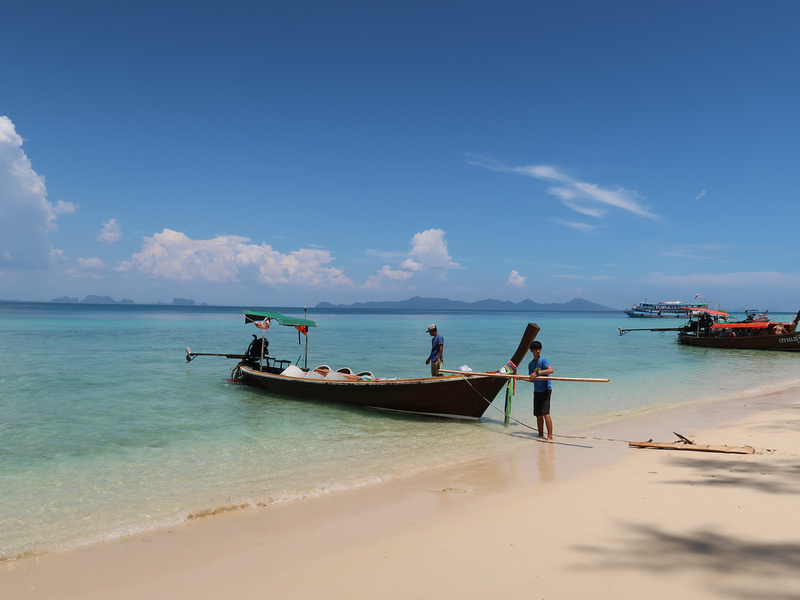 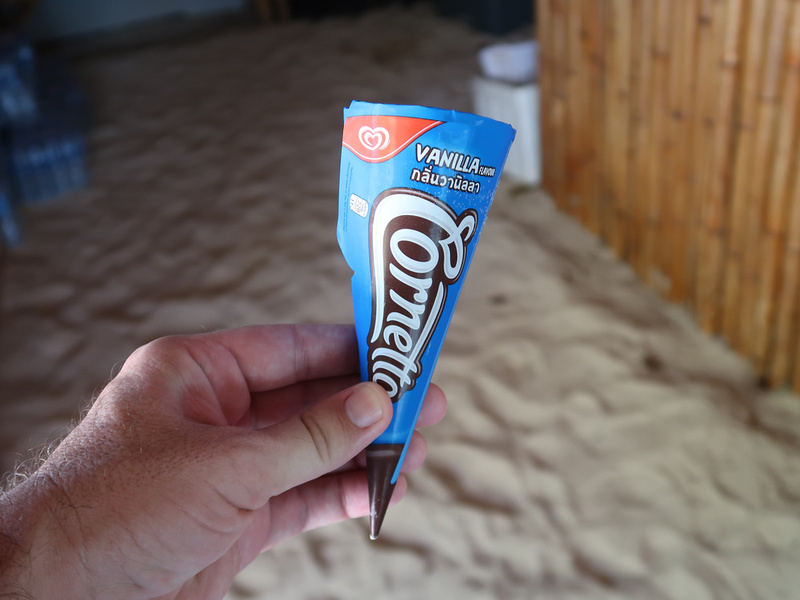 The cheapest meal I had was a chicken and rice meal at 150 THB. It was good, but I couldn’t help of think of my lunch the day before in Trang where I had a curry and rice for 40 THB. 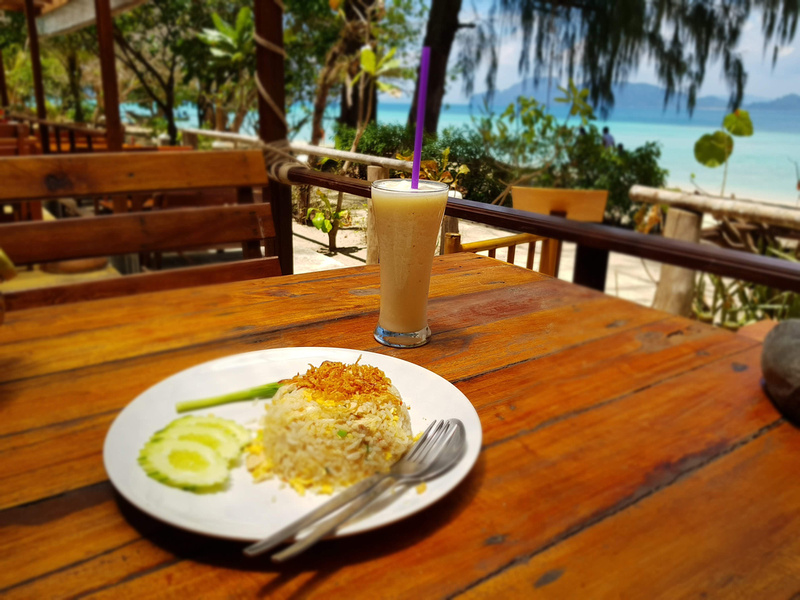 Price is all a matter of perspective. If you’ve been used to mainland prices then it is a bit of a shock, but if you are comparing prices with, say Australia, then you are still getting a bargain. 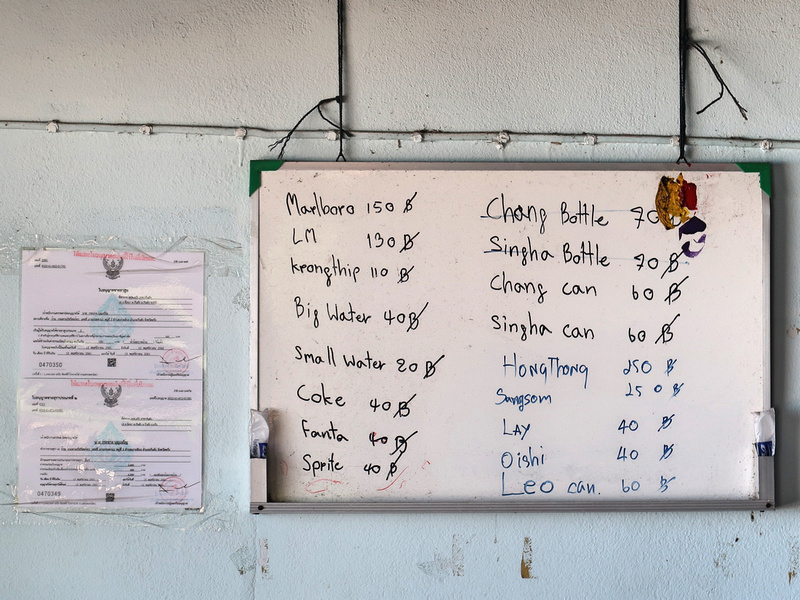 One thing that was about the same price as Bangkok were the beach massages. 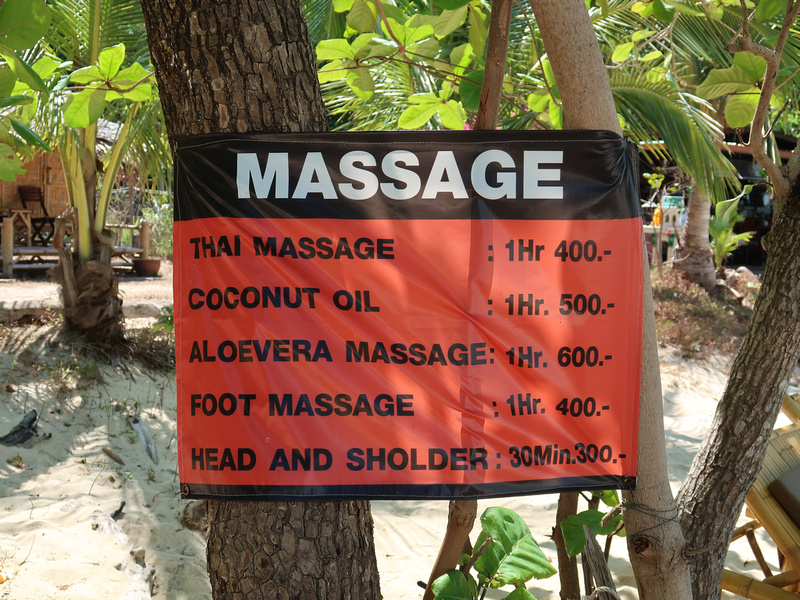 After doing a lap of the beach it occurred to me that this beach isn’t lined with coconut trees. Having some more coconut trees would add to the overall paradisiacal ambiance while adding to the economy, and having one less thing to import. 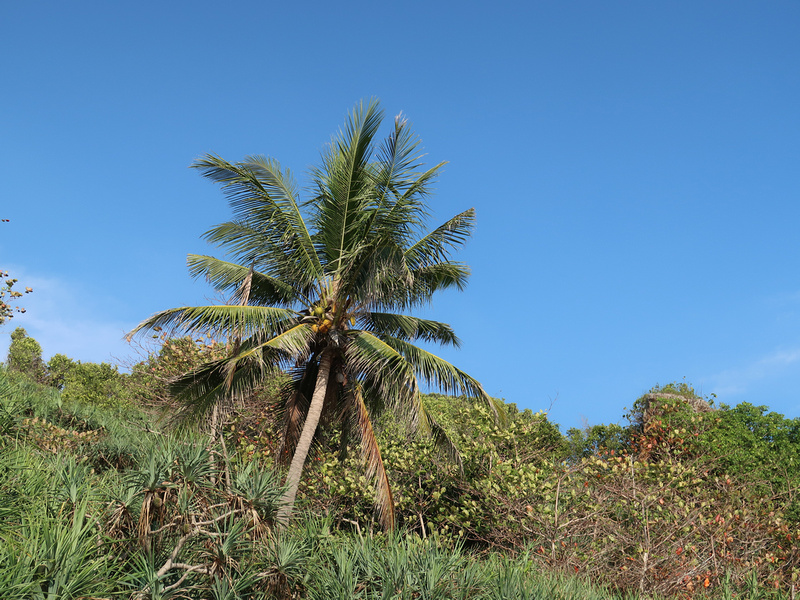 The island is too small for full scale agricultural endeavours, but surely planting a few fruit trees would go a long way in diversifying their food options. Mango and jackfruit trees grow into big trees that have a high yield for low maintenance.

The island is part of the Hat Chao Mai National Park. There is a park office on the island, and the interior of the island is a proper jungle. 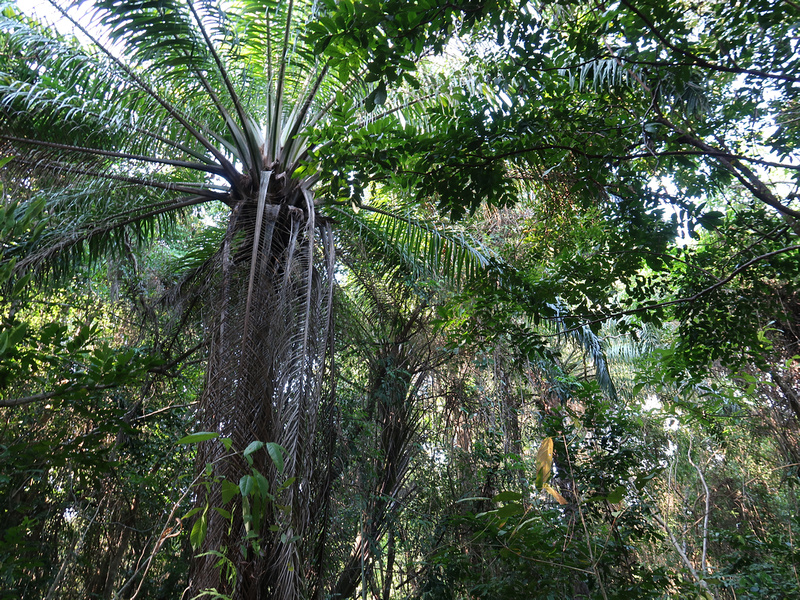 There are walking paths in the interior that connect to the beaches on each side of the island. 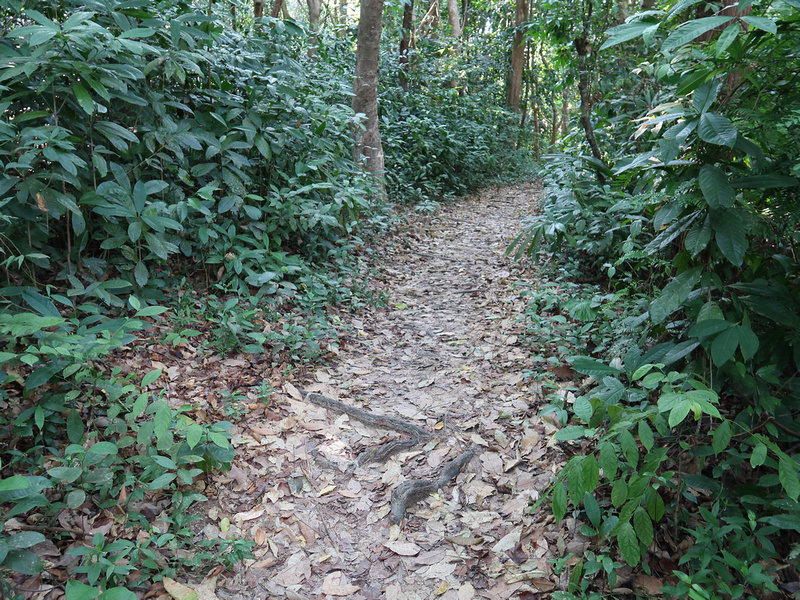 On the west coast of the island is Sunset Beach. This small beach is accessed by a steep path, and this side of the island is exposed to the open sea. Instead of the calm shallow waters on the east side, on this side you can hear the sound of the surf (but no surfing by the look of it). I loved the contrasts of the two sides of the island. 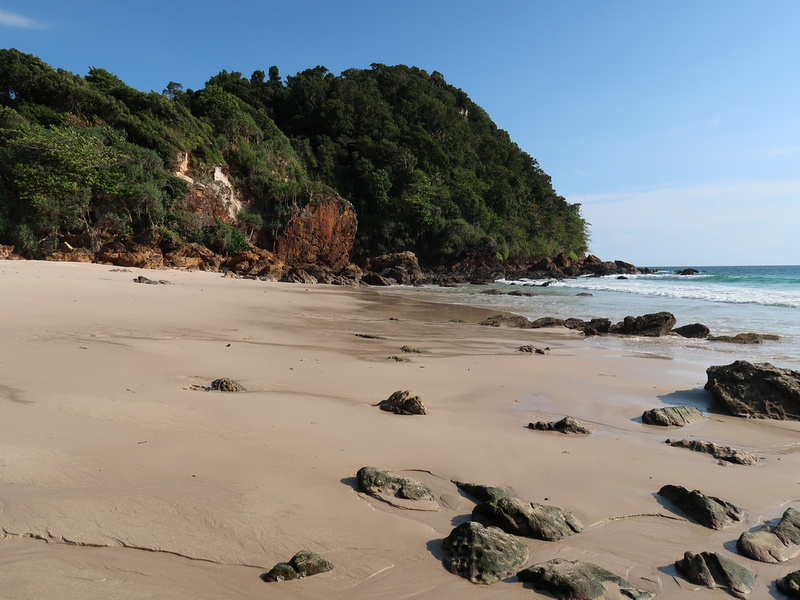 There is some birdlife here, and I saw a nice group of Thick-billed Green-Pigeons. 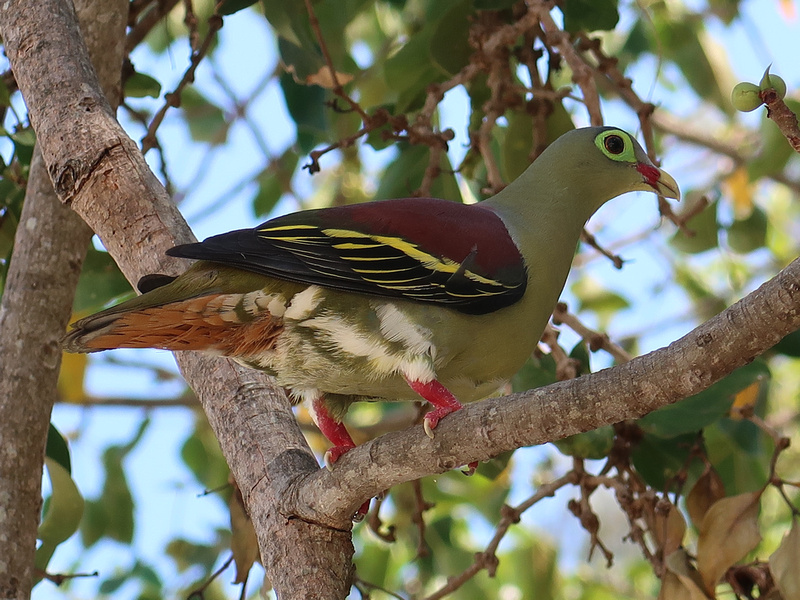 It was good to walk through the interior, but the real action is the beach. 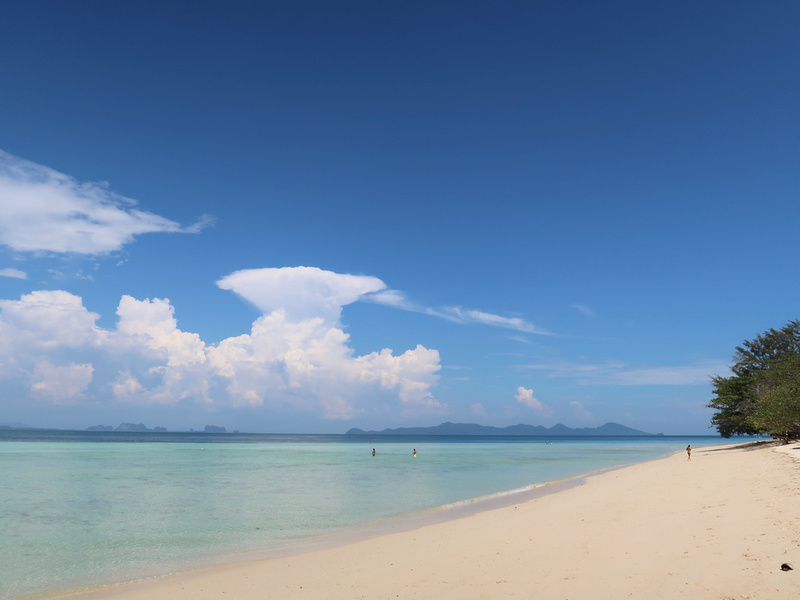 Where to stay in Koh Kradan

There aren’t many accommodation options here so the prices aren’t as competitive compared to bigger islands.

Paradise Lost Resort is the backpacker option, and that is inland on the path to Sunset Beach. If you want to do it even cheaper it’s possible to camp on Koh Kradan. 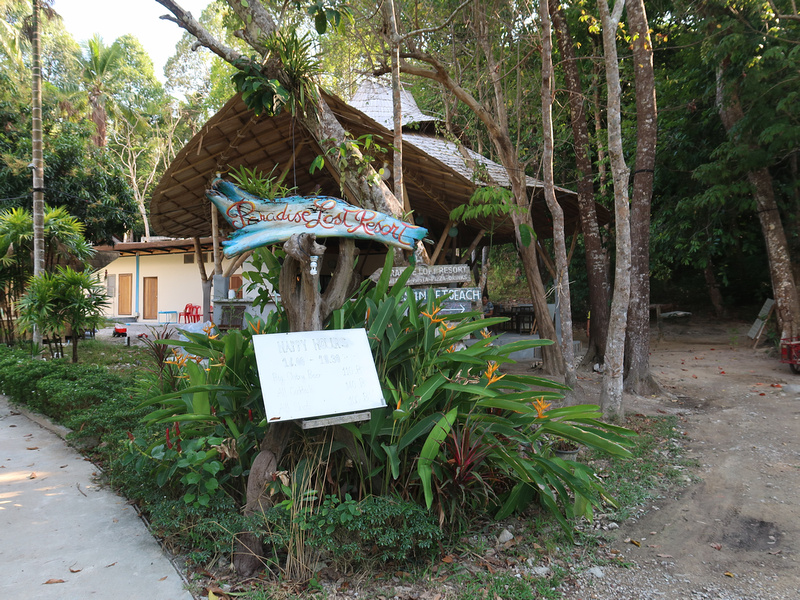 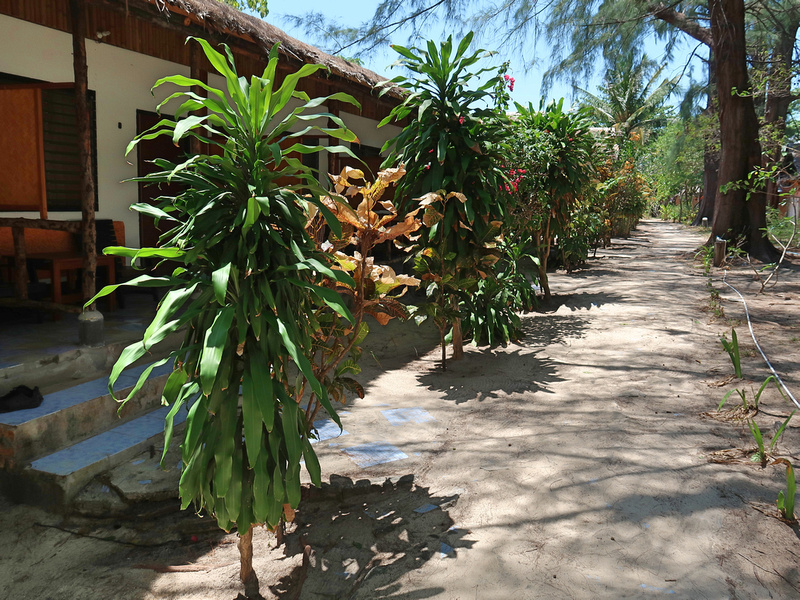 Reef Resort is a mid-range hotel that has a pool with a view. 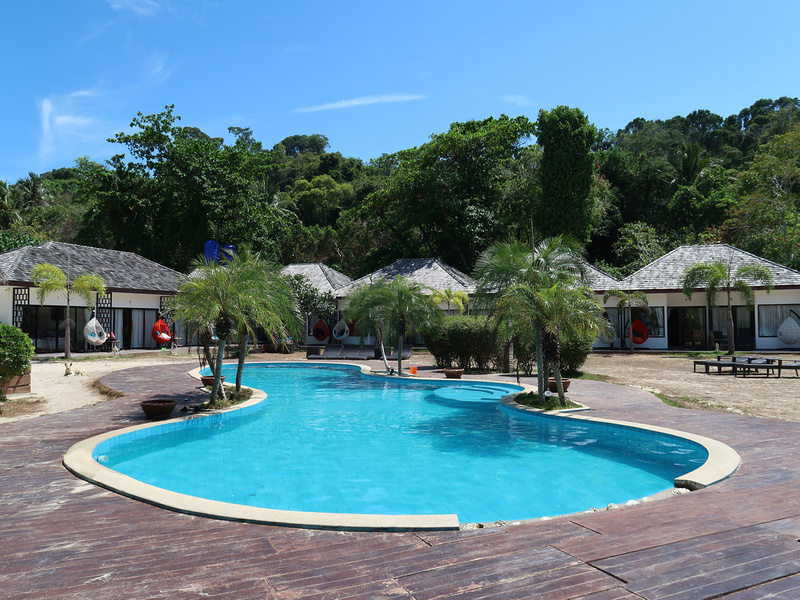 The Seven Seas Resort is a 4-star resort that features an open-air beach bar and swimming pool. 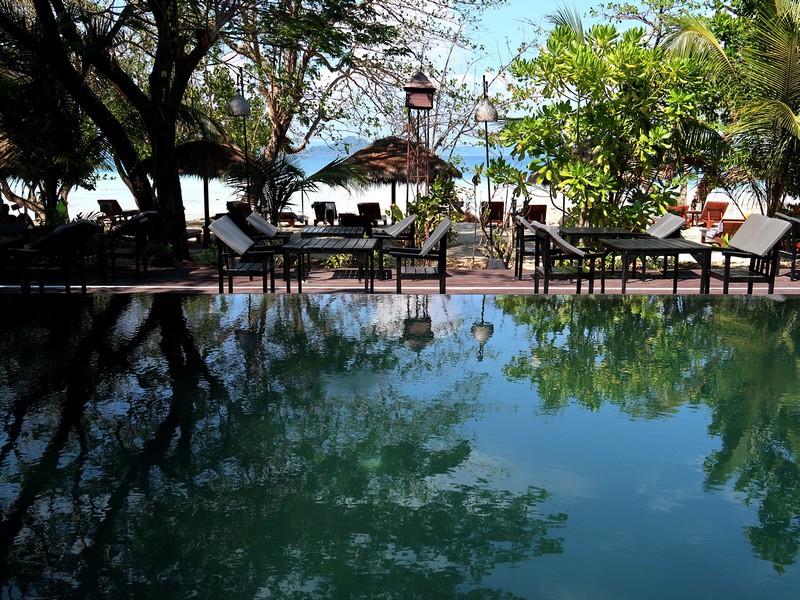 How to get to Koh Kradan

The easiest way to get to Kradan from Bangkok is to fly to Trang and get a minivan and boat from the airport. There are also two trains a night the leave Bangkok and arrive in Trang the next morning.

Boats from leave depart from Khuan Tung Ku Pier, which is about 45 minutes away from Trang. There are travel agents opposite the Trang railway station that can arrange transfers. 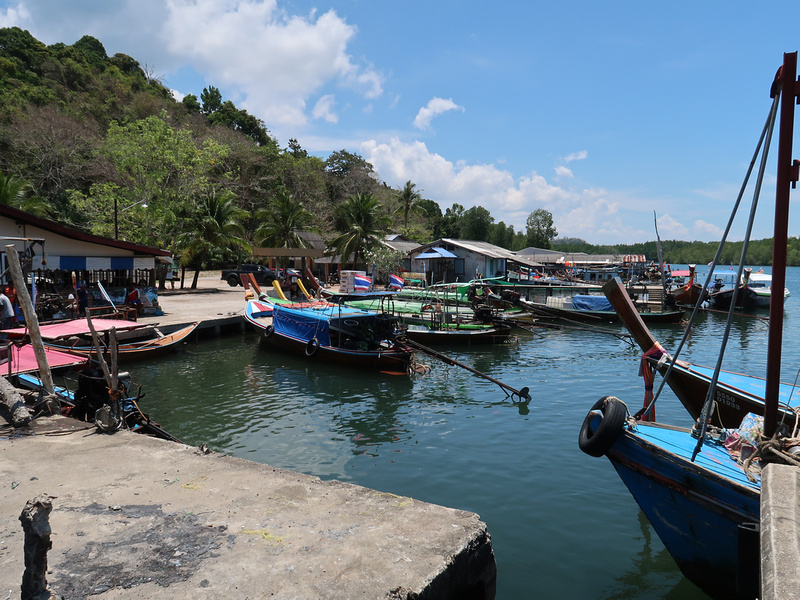 There is a network of speed boats and ferries that ply the islands of the Andaman Sea, which is a good option if you are planning on visiting other island in Trang. 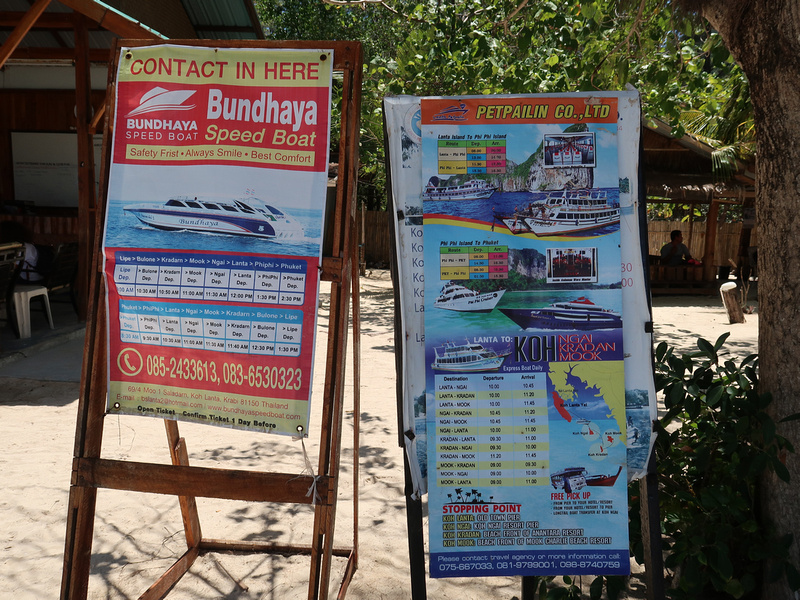 Search for train, bus, and boat connection to Koh Kradan with 12go Asia. 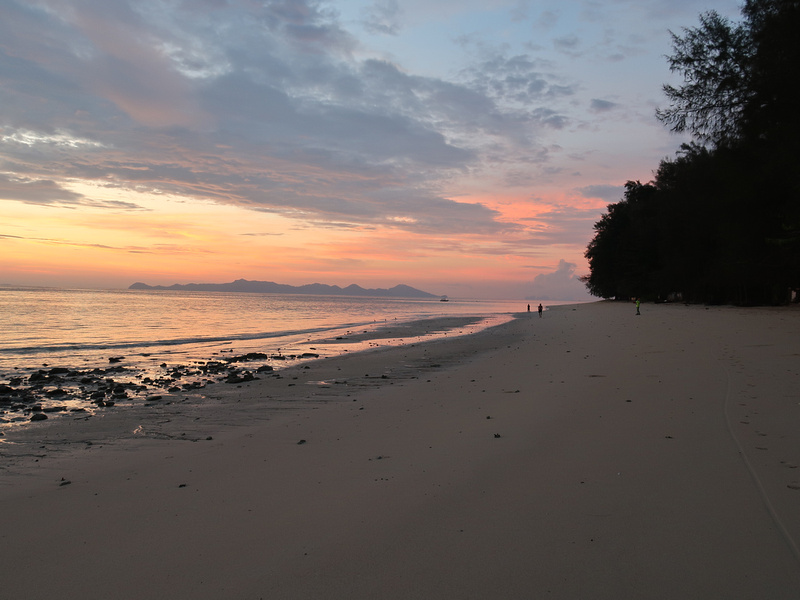 From Koh Kradan I got the boat and minivan back to Trang, and then another minivan to Hat Yai, which is a major hub city in the south of Thailand.

I could see myself coming back here as part of a grand Andaman coast island hopping adventure from Langkawi in Malaysia to Phuket. I’ve read some articles that have proclaimed the Trang Islands to be the next big thing. The news to watch will be what happens with the Trang Airport expansion. At the time of my visit Trang had three flights from Bangkok Don Muang Airport, so it’s hardly a mad crowd.