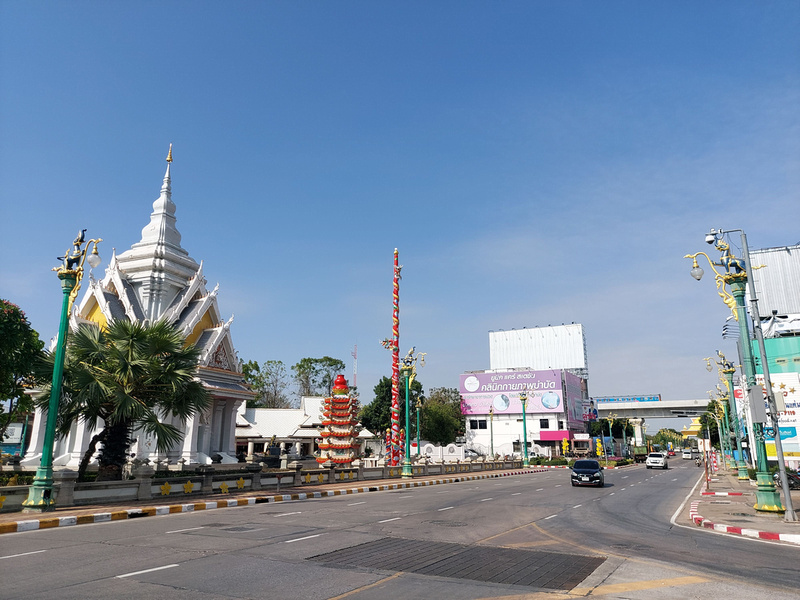 Khon Kaen is the capital of Khon Kaen province in the Northeast region (Isaan) of Thailand. It is one of the “big four of Isan” (along with Udon Thani, Nakhon Ratchasima, and Ubon Ratchathani).

My interest in visiting Khon Kaen was to see how it is progressing as a transport hub, and to see some urban development projects in the city. And I just like visiting provincial capitals in Thailand, so I don’t really need an excuse to visit a place. 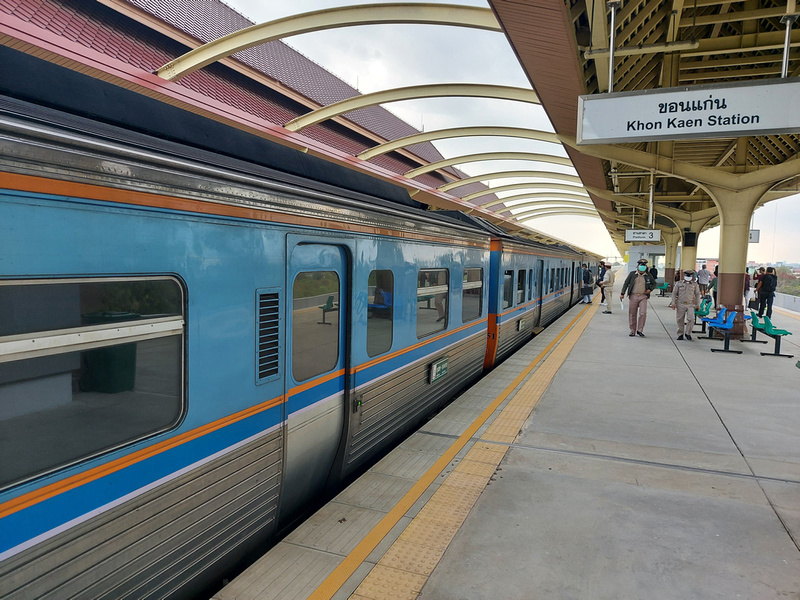 I arrived at the new elevated railway station, which is an imposing site in the city. The station is in the city centre so it is a convenient way to arrive. I booked a hotel near the station, and it turned out to be near enough to everything you need. 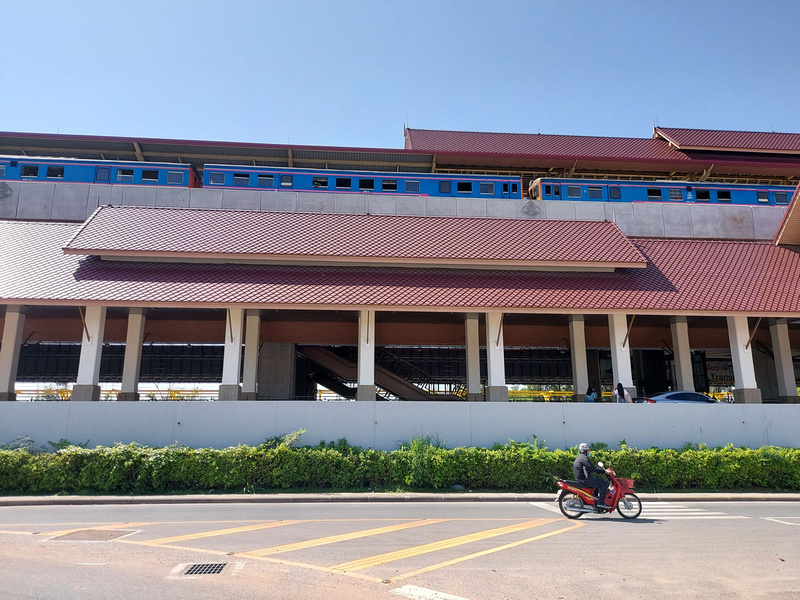 Without knowing where to visit first, I marked some cafes that looked cool on my Google Maps and started walking around. I arrived at MarKoff Cafe just as it started raining. I don’t know if I looked like I just got off a long train trip, or if they just overshot the espresso, but they gave me an espresso chaser to go with the latte, so this cafe already made a wonderful impression on me in my first hour in the city. 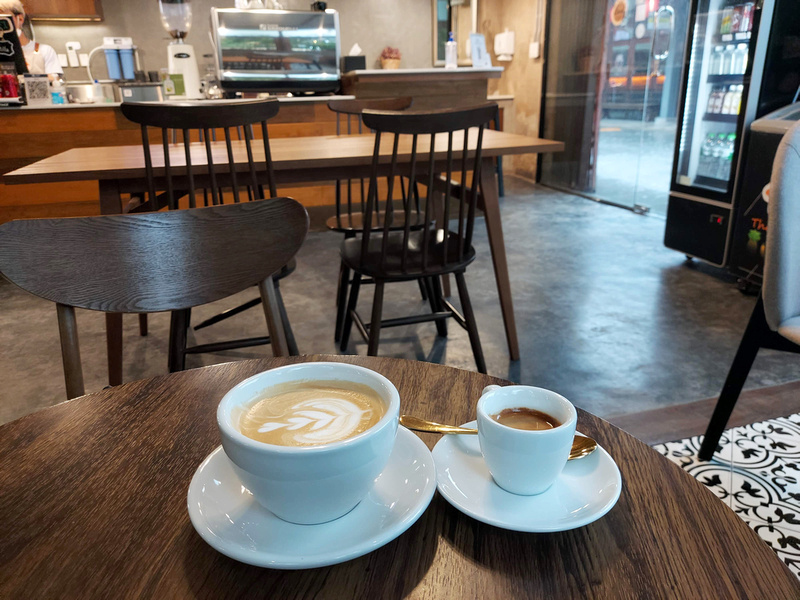 A little building boom has been happening in the city, adding a skyline in a region known for its flatness. This building will be the Khon Kaen Innovation Center. 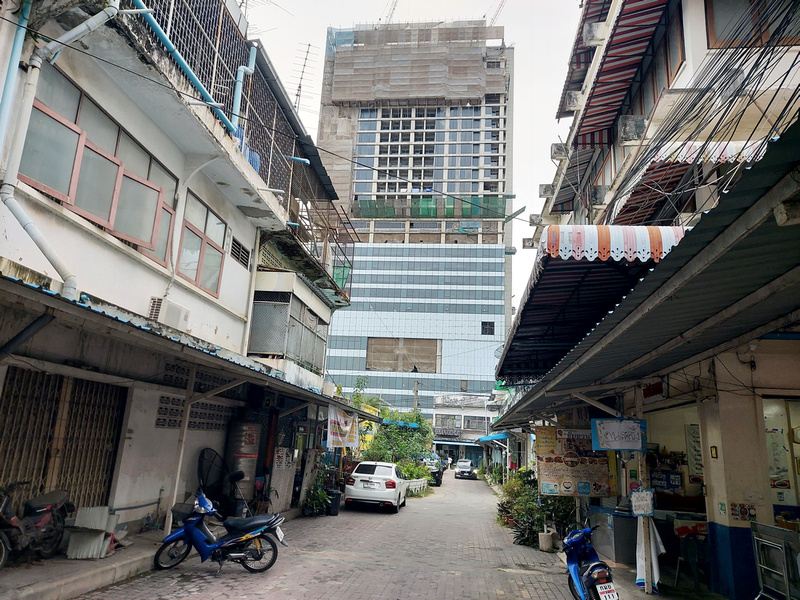 There are new apartment blocks here that wouldn’t be out of place in Bangkok. This is The Houze Condominium with an attached mall at the base. 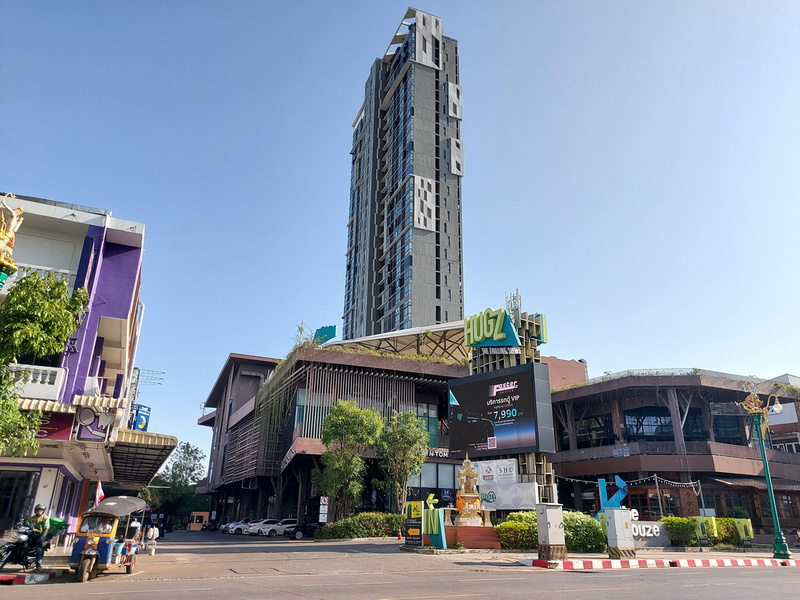 Something else that made me think I was in Bangkok was this Alex Face mural. While his Instagram account is @alexfacebkk, his work can be found all over Thailand. 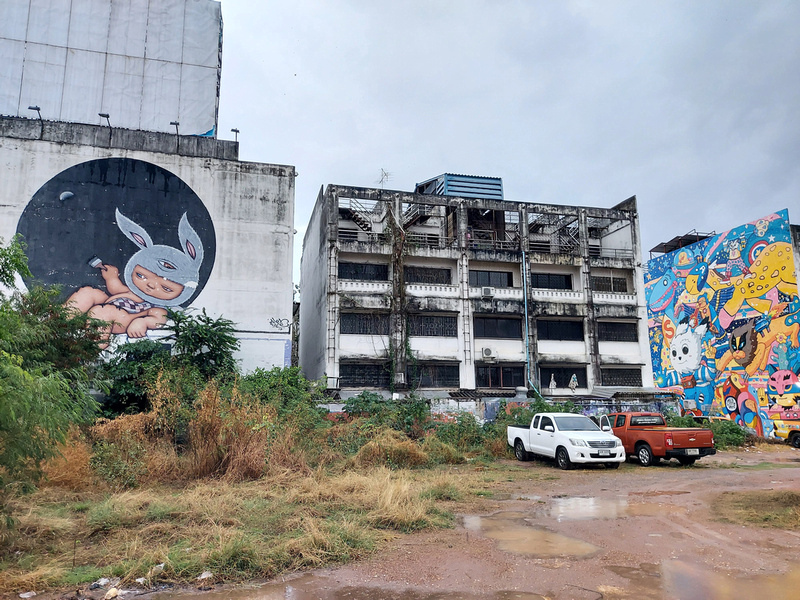 The main landmark is the City Pillar Shrine.

One of the landmark buildings of the city in terms of size and location is the Pullman Hotel. 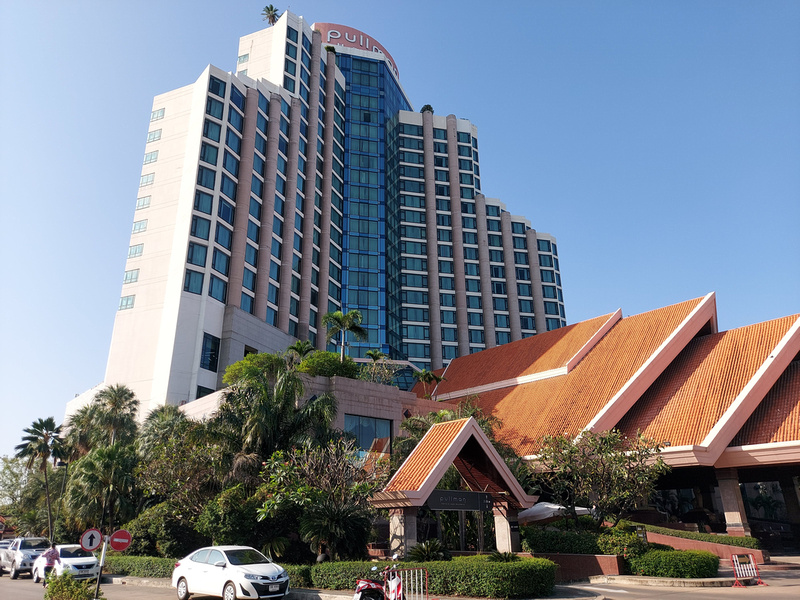 Near the Pullman is a small expat bar scene. I was here in February 2022, just months after the country had reopened. Like everywhere else I had been in Thailand, there were many places that still hadn’t reopened, and maybe never will. It was hard to tell with Khon Kaen though as I had never been here before, and it’s not exactly a tourist city. Most foreigners you see in Isaan tend to be retired expats, at least that is what it looked like on my previous visits to Nakhon Ratchasima and Ubon Ratchathani. 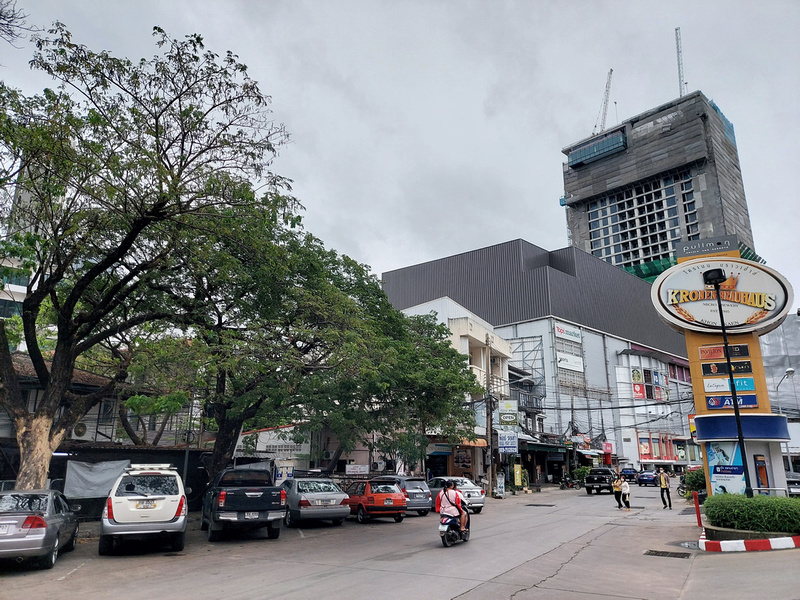 I don’t drink, so I can’t tell you much about the bar scene. I walked up and down the bar street every night, and it felt like you would know everyone there after a week.

I kept looking around for cafes, and there are plenty around the city. Khon Kaen is big enough for the main chains like Starbucks as well. The most unusual cafe I found was Godfather Coffee, which is literally a Godfather-themed cafe with The Godfather playing on loop on a big screen. Novelty cafes are not usually places to get a proper coffee, but this was a quality coffee. There is also an outdoor garden if you prefer not to be inside. 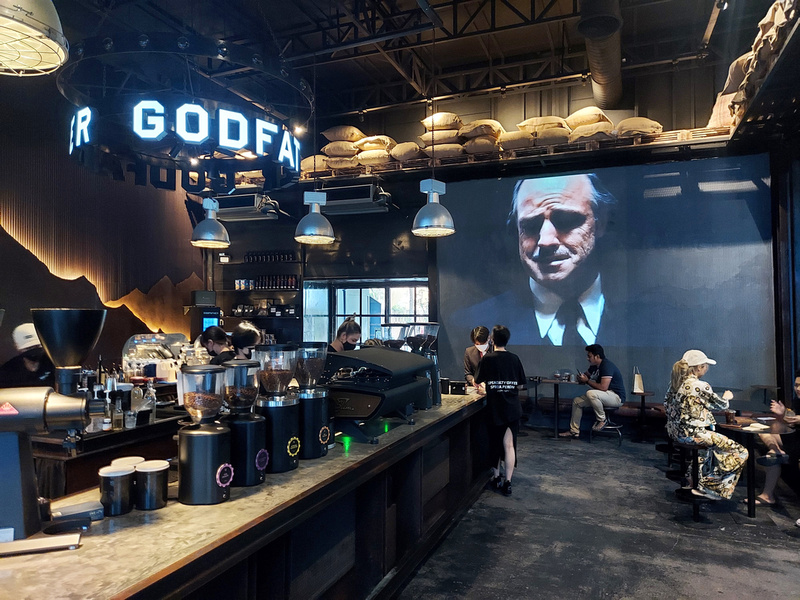 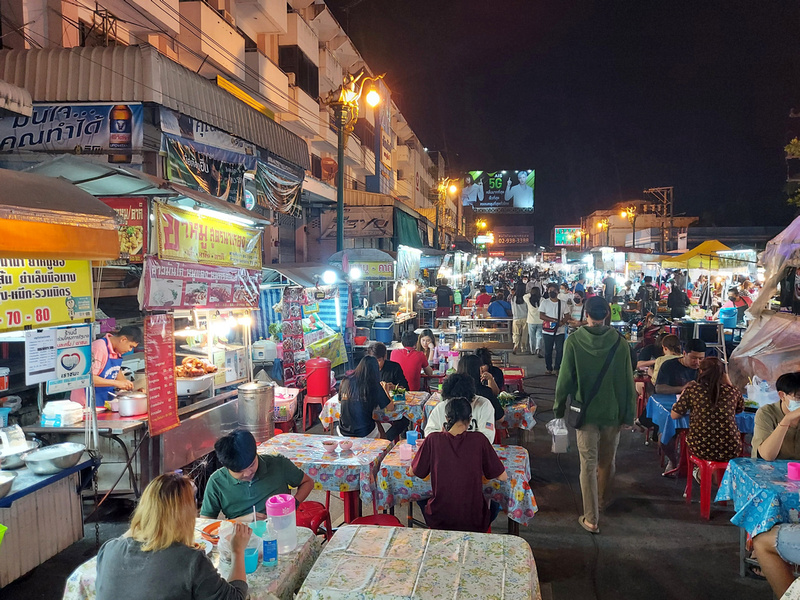 There is also a good food court on Ruen Rom Road I visited for lunch. 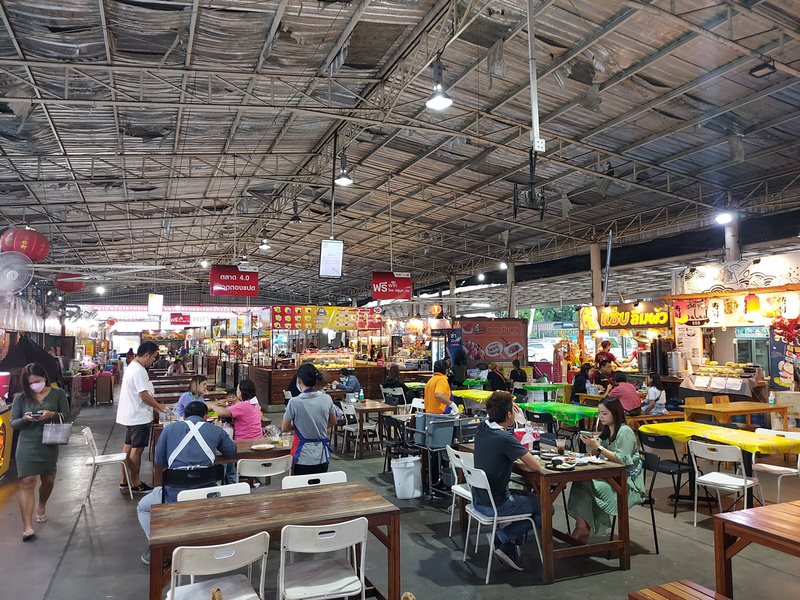 Khon Kaen is an inland city that is not on a major river. It does though have an impressive lake (Bueng Kaen Nakhon) that is about 3.7 km around. 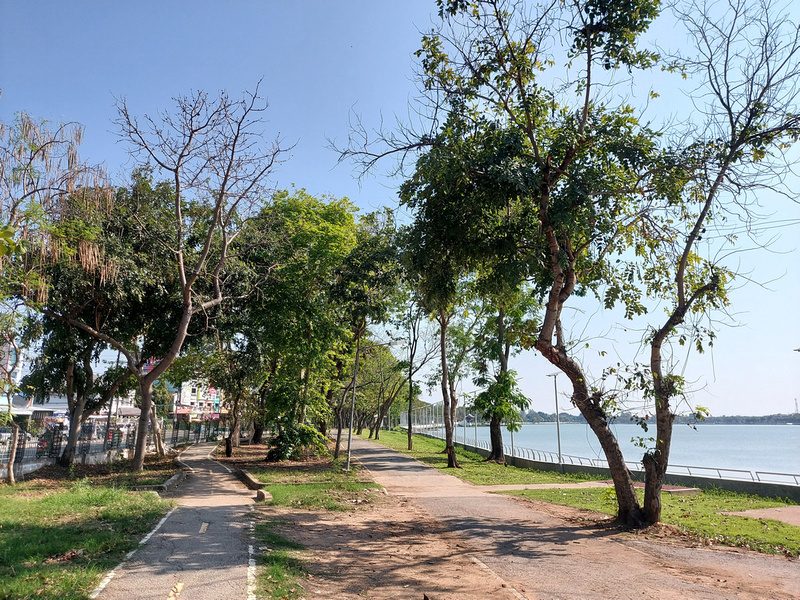 While walking around I noticed a pagoda on one pillar with a Vietnamese flag. This is a replica of the One Pillar Pagoda in Hanoi, erected by the community of Vietnamese that live here. There is also a Vietnamese consulate here, which indicates the size of the Vietnamese population in Khon Kaen. 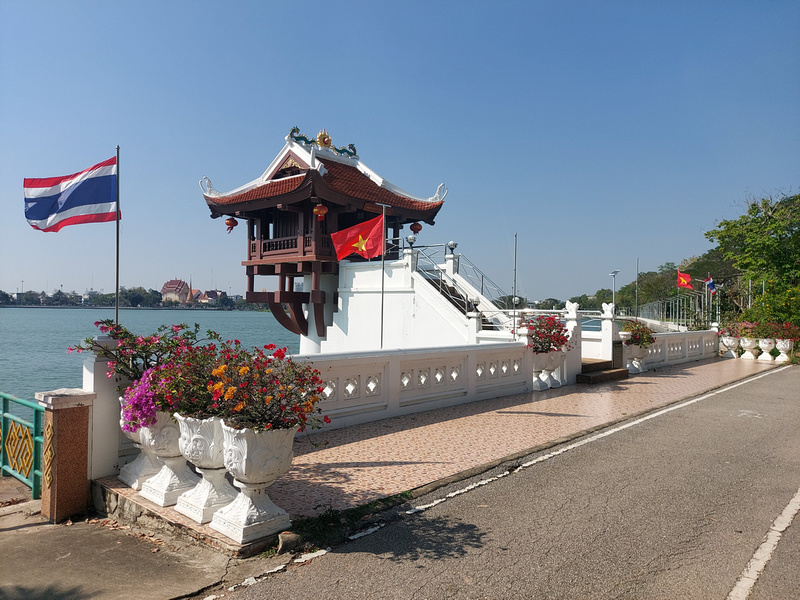 Another thing you will notice on a walk around the lake (if you didn’t already notice in the city) are the dinosaur statues. 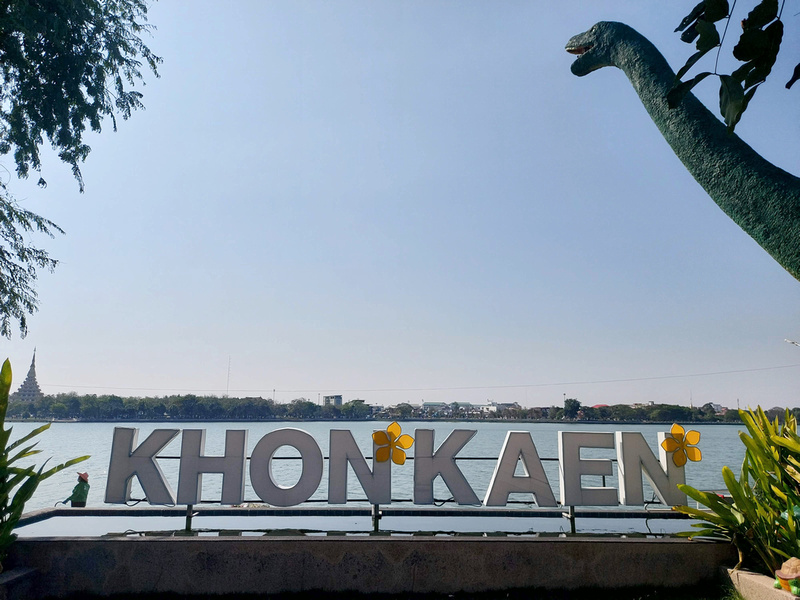 Dinosaurs are an unofficial mascot of the city, in reference to the Si Wiang Dinosaur Park, about 70 km from the city centre. 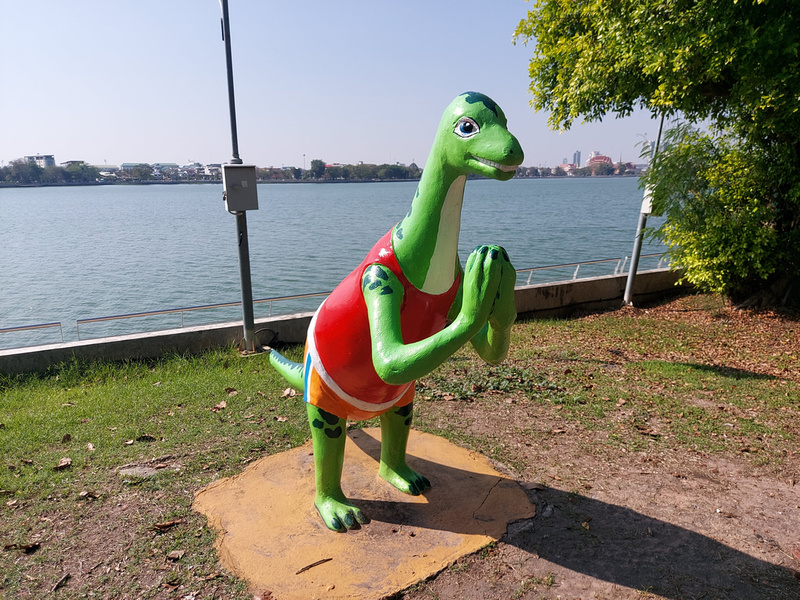 Near the lake is the beautiful Phra Mahathat Kaen Nakhon. 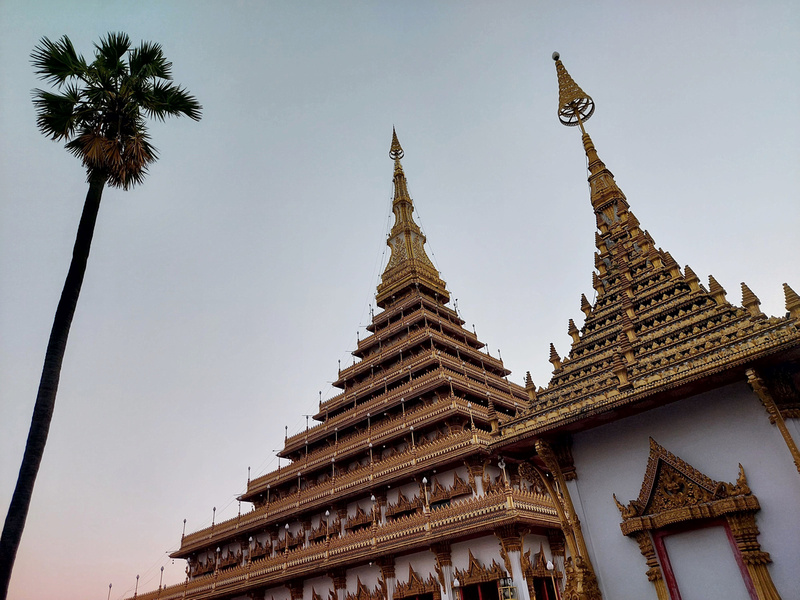 One reason I wanted to visit Khaon Kaen was to get a feel for the city and its streets where a proposed transt system will be built. There is a north-south line that has been proposed along the main highway that runs along the west of the city centre. 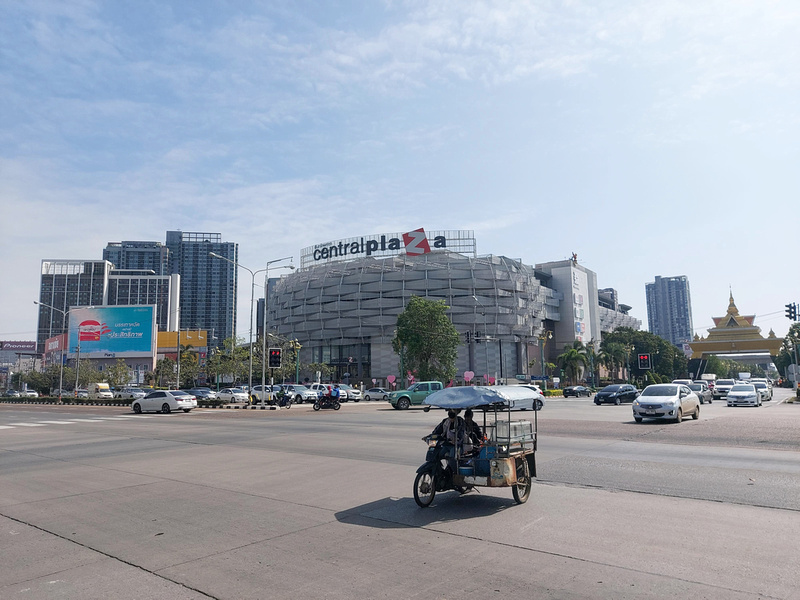 [An elevated interchange station is planned in front of Central Plaza.]

I happened to be in Khaon Kaen a few days before the Isan Creative Festival, and one of the displays for the festival was an information booth about the transit system housed inside a replica of the lightrail. 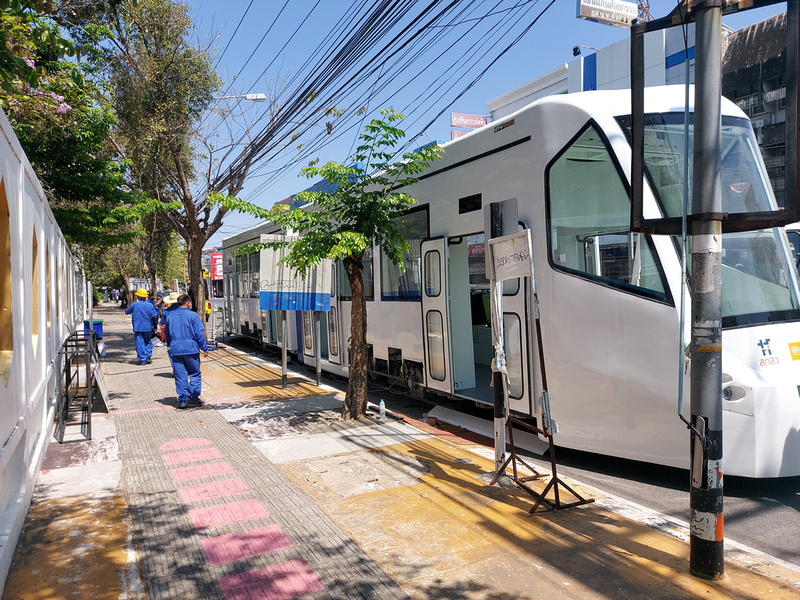 Unfortunately I was already booked for my next destination by the time the festival began, but I got a glimpse of what a light rail might look like in Khon Kaen. 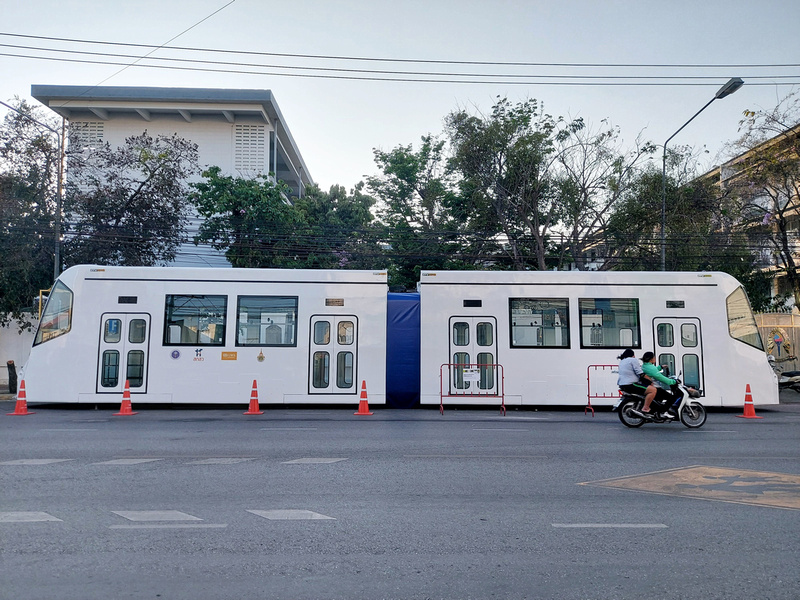 There are a number of proposed transit systems in provincial cities in Southeast Asia that will probably never be built, so who knows if Khon Kaen will build it. Either way, I am impressed with the ambition of Khon Kaen to be this modern city in a region that is often overlooked in Thailand.

Something that is more likely to happen is the high-speed train from Bangkok to Vientiane. That will mean getting a train from Bangkok to Khon Kaen will only take about 2 hours instead of the current 7 hours. Will more people move here if it’s easier to get to Bangkok? Will people from Bangkok come here for weekend breaks (perhaps visit the Dinosaur park on the side)? 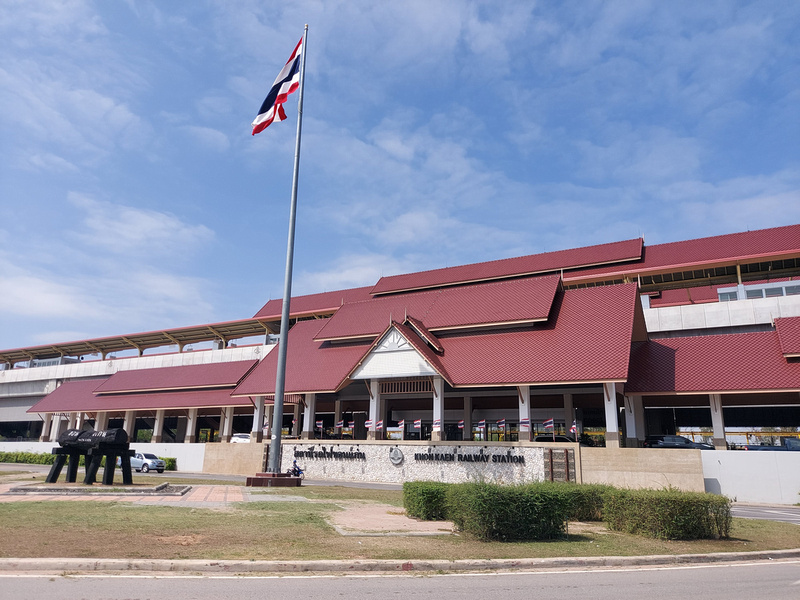 The high-speed project is a separate railway to the current line. For some strange reason, Thailand is building two separate lines (which I wrote about here). The current line is a meter gauge line, and they recently double-tracked the line and elevated it through the city. The new line runs above the old line. 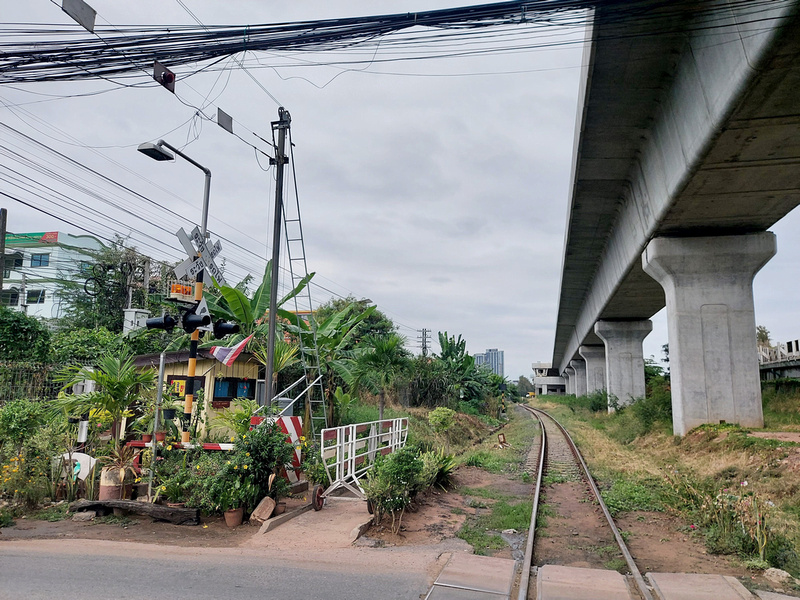 This elevated railway has removed level crossings in the city, making the city feel a little more grown up. 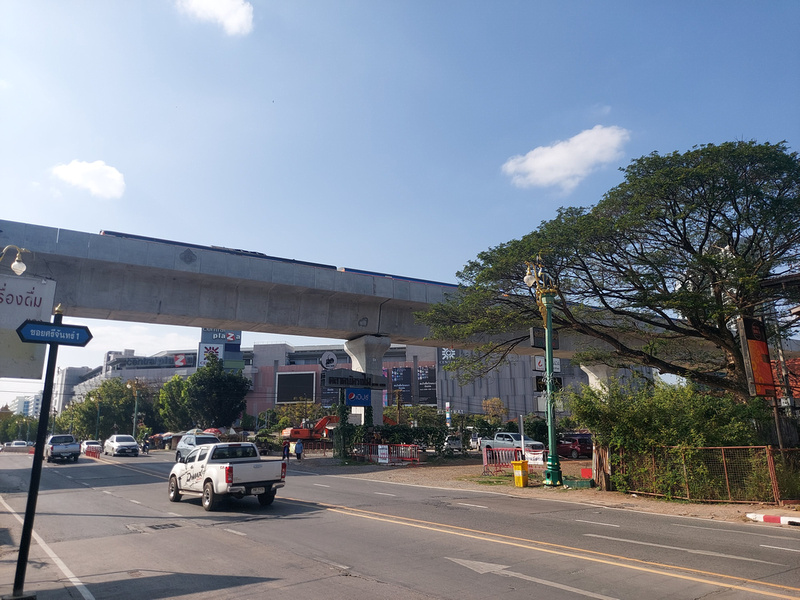 Khon Kaen also has an airport, which I didn’t consider as an option until I saw some advertising in the city. 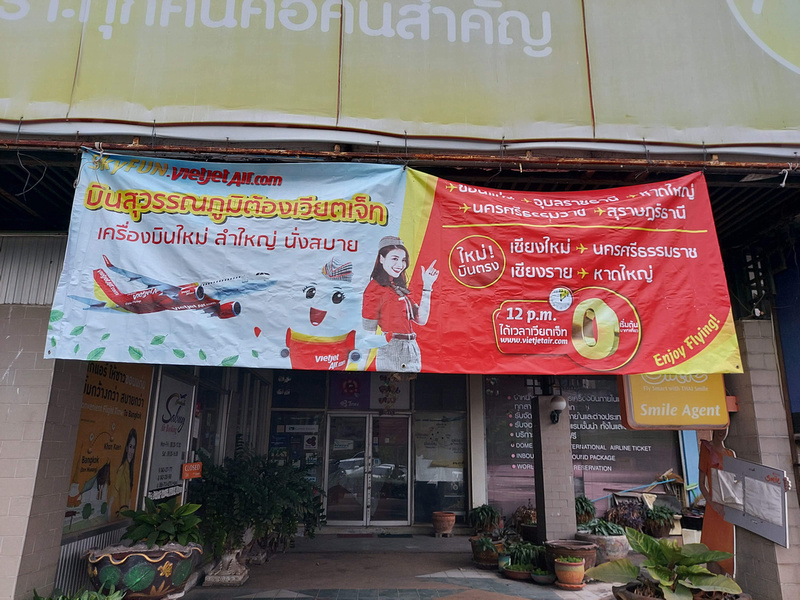 Most of the flights are to Bangkok, which is only 450 km away. This route should become redundant once the high-speed rail arrives, which might explain why the airport has been looking to expand to other markets (including international flights).

Another project that had me interested in Khon Kaen is the East-West Economic Corridor Railway. The railway will connect ports in Myanmar and Danang, via Thailand and Laos. The Thailand section goes through Khon Kaen, but it will go through Ban Phai south of Khon Kaen City.

The railway has been approved, and land for the railway was marked out at the time of my visit. The line will go to Mukdahan on the Mekong River, which was my next stop after Khon Kaen. 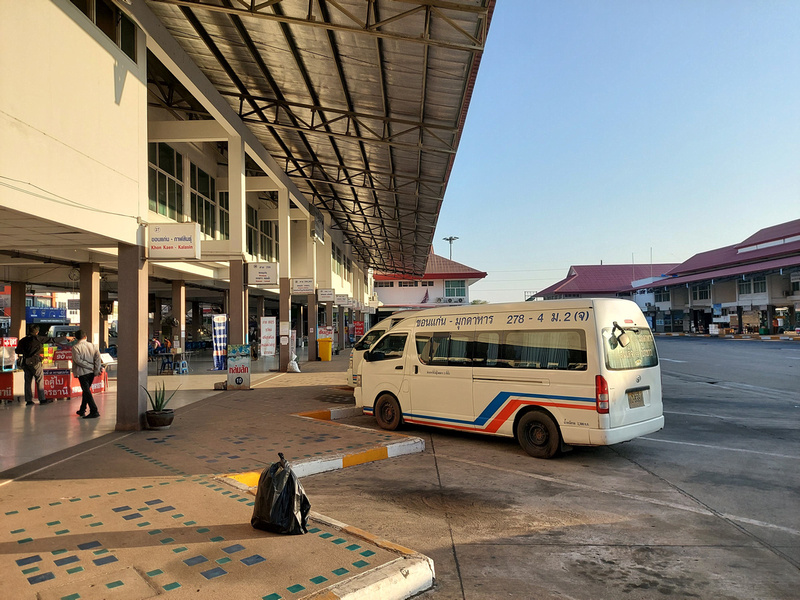 For small buses and minivans you just buy the tickets at the station or from the driver. You can buy intercity buses and train tickets online. Check here for Bangkok to Khon Kaen trains.