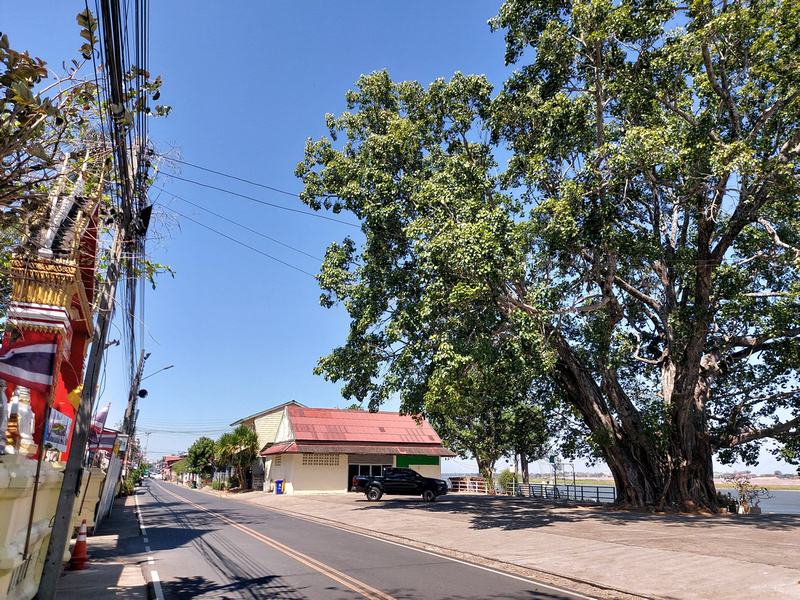 Mukdahan is the capital city of Mukdahan Province in the Northeast region of Thailand (better known as Isan). Mukdahan is on the Mekong River, with Savannakhet in Laos on the other side. I’ve been to enough provincial capitals to know not to expect too much, but I have also been to Nong Khai on the Mekong River, and I like the pace of these provincial cities by this mighty river. 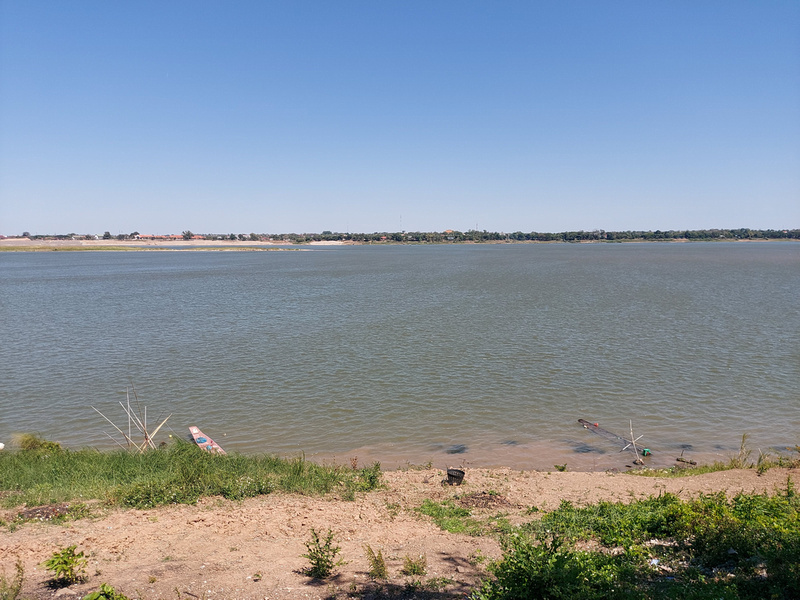 [The Mekong River with Savannakhet in Laos on the other side.]

My mission to Mukdahan (apart from making my way through every province in Thailand) was to follow the path of a new railway that will travel to Nakhon Phanom via Mukdahan. This new railway will branch off the Bangkok-Nong Khai line at Ban Phai, providing this isolated part of Isan with a railway connection to Bangkok. The railway is part of the East-West Economic Corridor Railway which starts in Myanmar and ends in Vietnam. The line will cross the Mekong at Mukdahan and continue through Laos at Savannakhet. 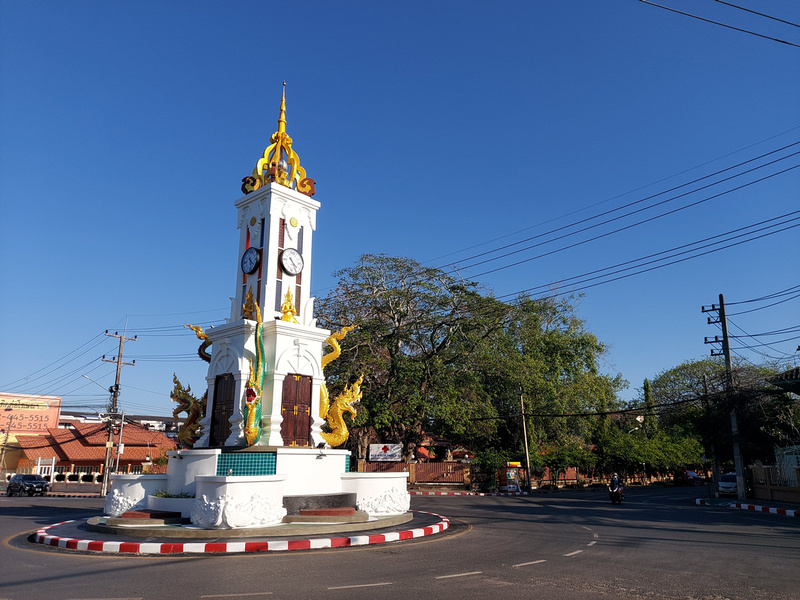 There is no train yet though, so after getting the train from Bangkok to Khon Kaen and spending a few days in Khon Kaen, I got a minivan to Mukdahan.

I picked a hotel near the river, and I happened to be staying near the evocatively-titled Indochina Market. 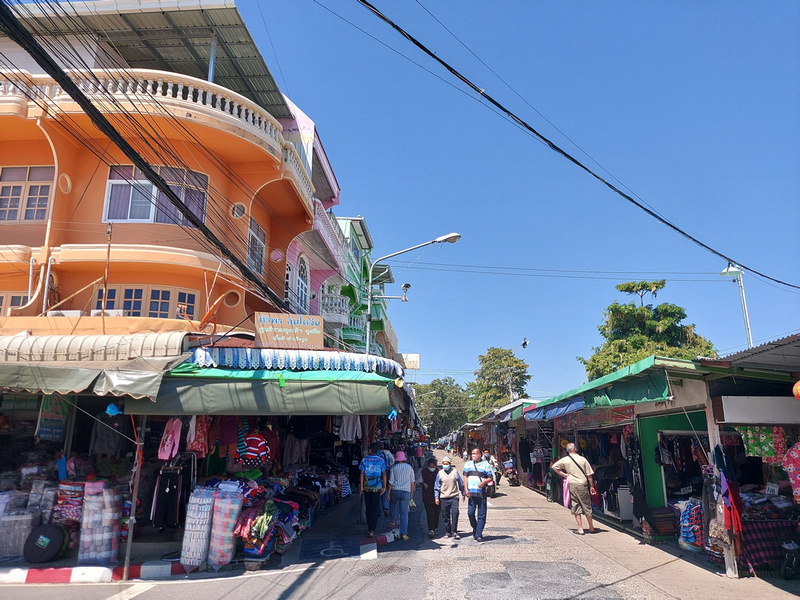 The name alludes to its international status as a border market. In normal times this market would be bustling with shoppers from Laos. I was here in February 2022 when Laos had still not reopened its borders, so there wasn’t much of an international market vibe. 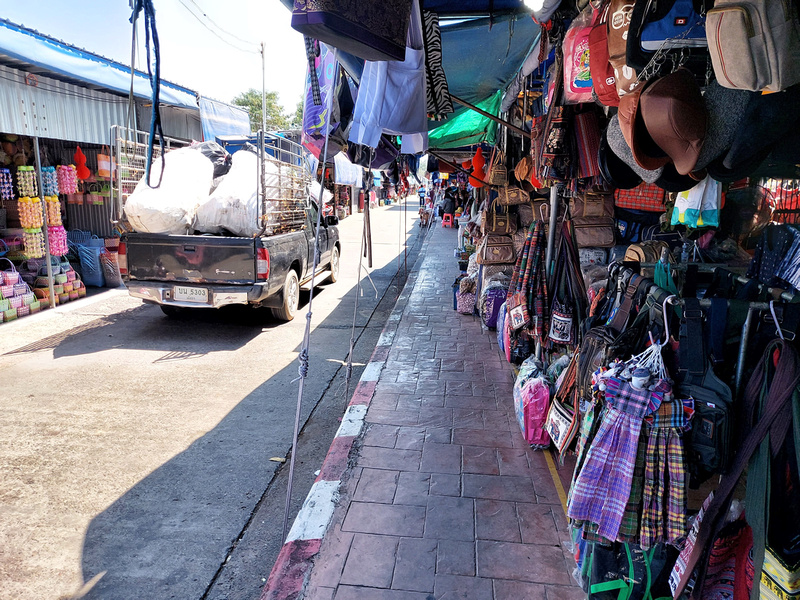 I came here to wander along the Mekong, and there are some great old trees and a lovely wat by the riverfront.

There are some restaurants on the riverfront, but not as many cafes as I hoped there would be. It felt like Mukdahan was not making the most of the riverfront as Nong Khai. 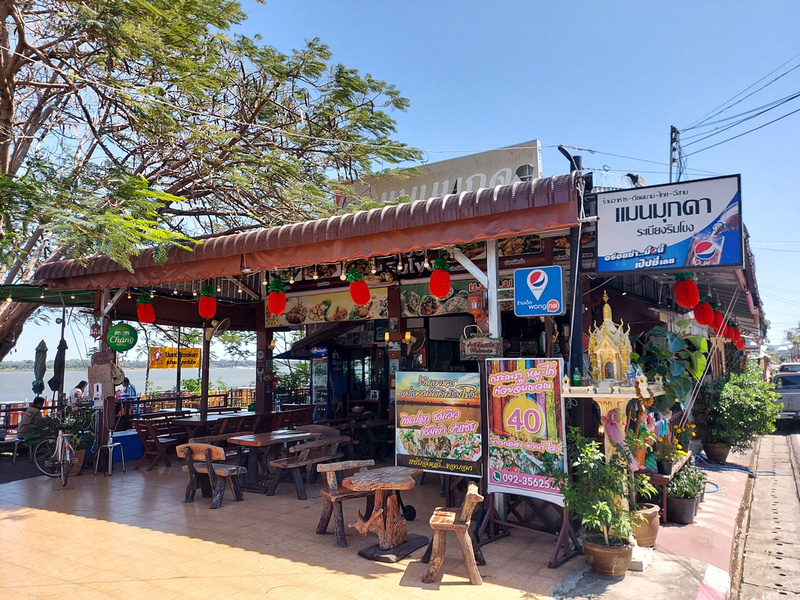 Parts of the riverfront were being renovated when I was there, so hopefully, the riverside promenade will become an attraction for the city. 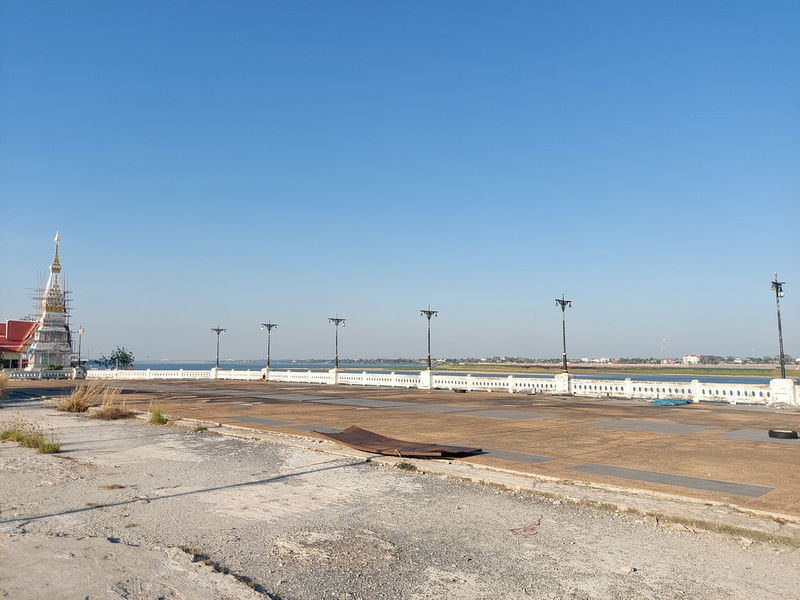 [A closed section of the riverfront that was being renovated.]

There is an international port on the river with boats going to Savannakhet. Opposite the port is an immigration office for those who have overstayed their visas. This was still closed as well, so the temptation to cross over to Laos was removed for me. 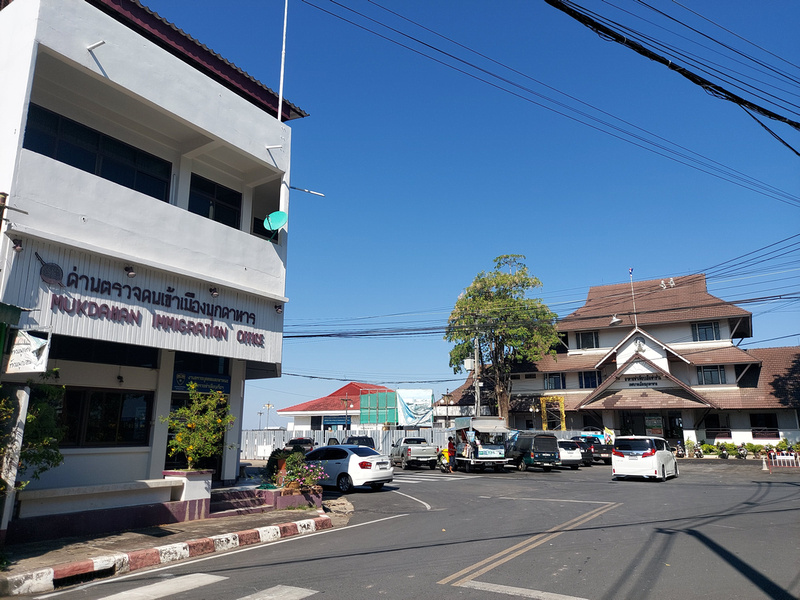 Most of the buildings in Mukdahan are new concrete blocks with a mish-mash of styles that is so common in Thailand. Apart from the wats, I didn’t see anything that looked old until I saw this old wooden house that was holding on for dear life. The wooden shophouses of old Mukdahan have not survived. 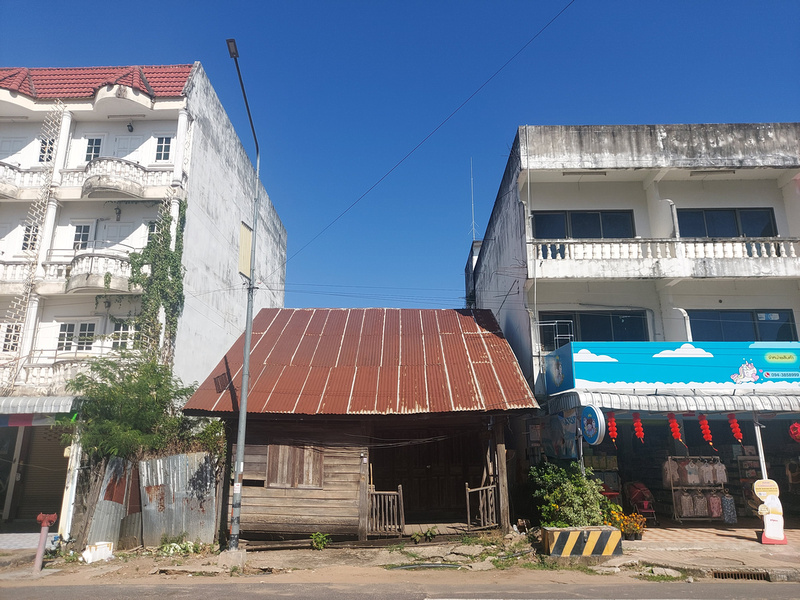 The concrete buildings of urban Thailand start to look drab when they become water-stained after a few rainy seasons. It doesn’t take much to make them look good. All that concrete is a blank sheet upon where a mural can change the feel of a street. 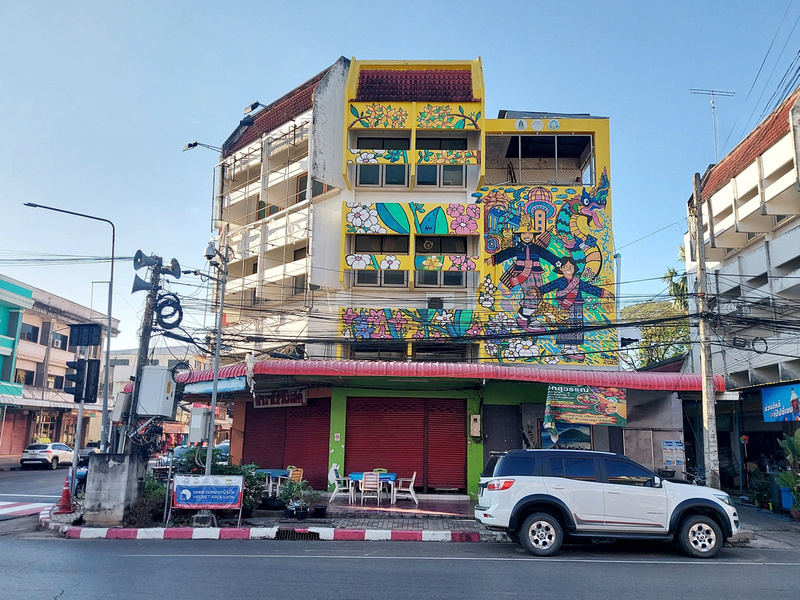 The landmark of the city is Ho Kaeo Mukdahan. This is a 65-meter-high observation tower which I initially thought was some kind of international control tower for shipping on the Mekong. The tower includes a museum, but when I visited it was still closed due to the pandemic. 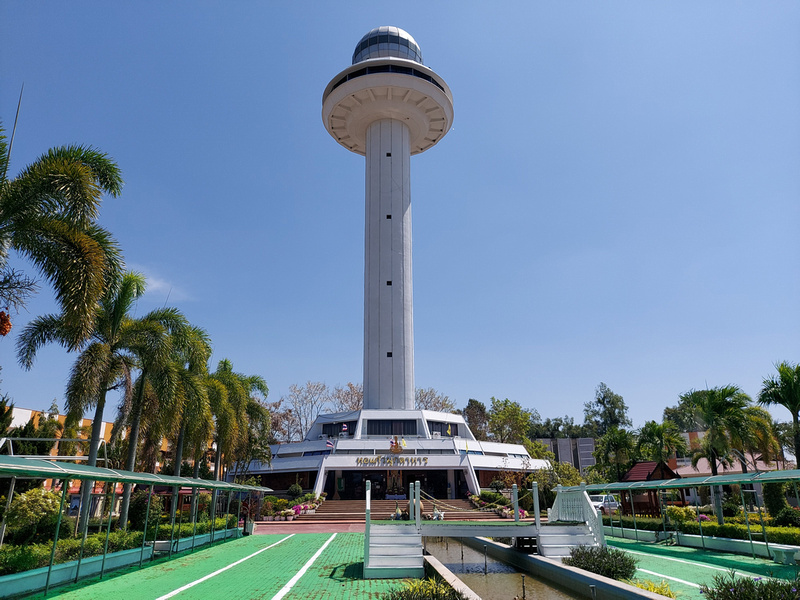 I used this tower as a random adventure generator, with the walk there sending me into a part of the city that I would have otherwise not visited. I ended up refuelling at a roadside chicken shack, so that got my Isan grilled chicken and sticky rice fix out of the way. 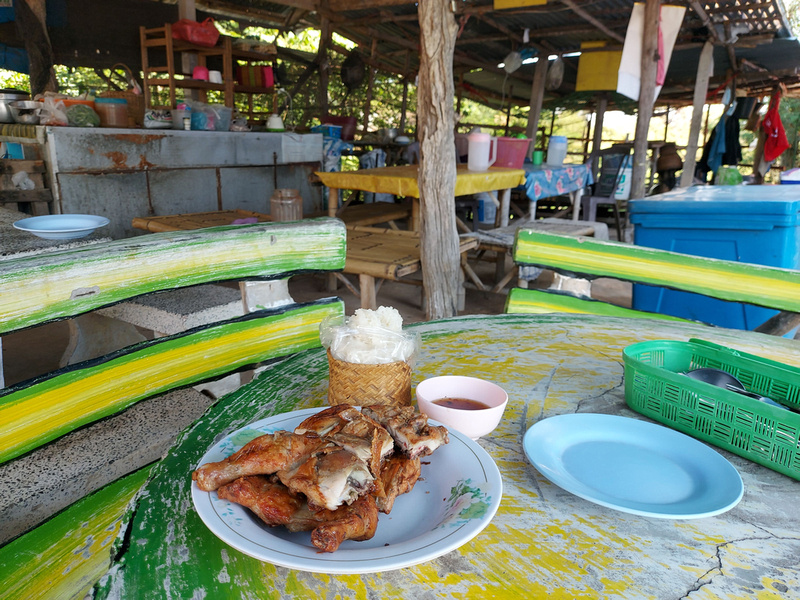 When I am doing these random urban walks I use city parks as targets to walk to, which is how I ended up at Golden Jubilee Park. 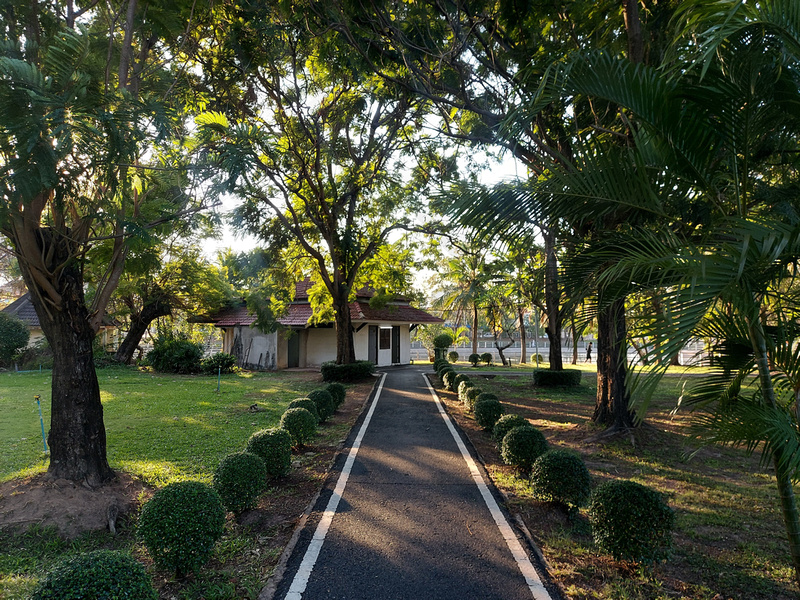 The most beautiful places are always the wats. 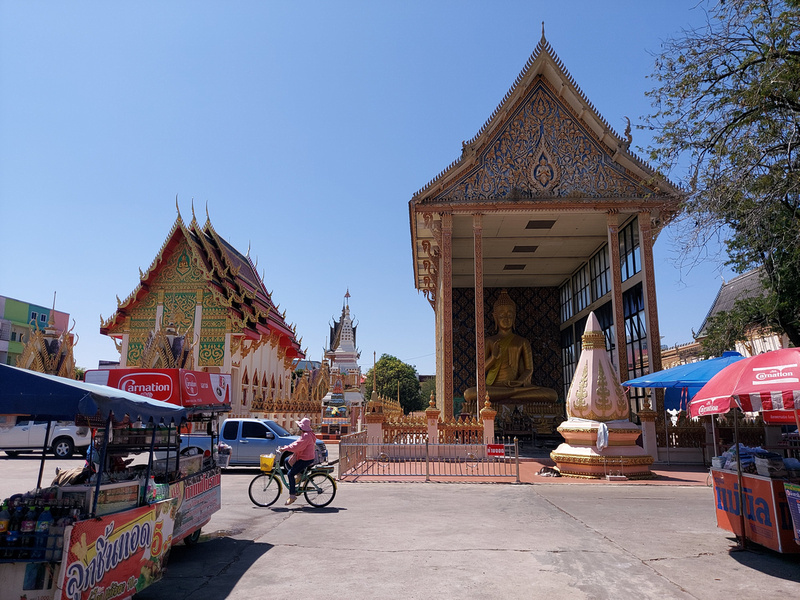 My walks are always punctuated with cafe stops. I visited 18 View Wann Cafe so I could have a coffee with a view of Laos (it also had a view of the construction mess). 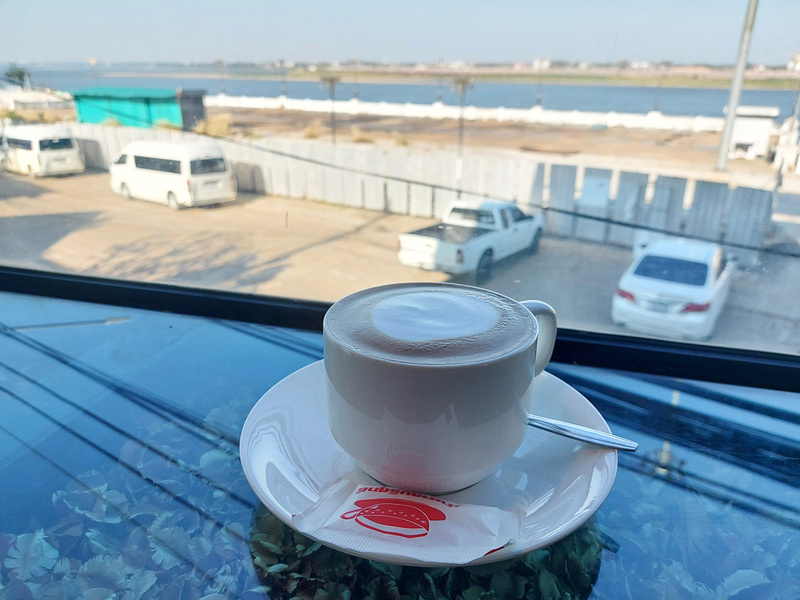 The best cafes are away from the river, and I was surprised to find a proper cafe in a suburban area called 33 Backyard. 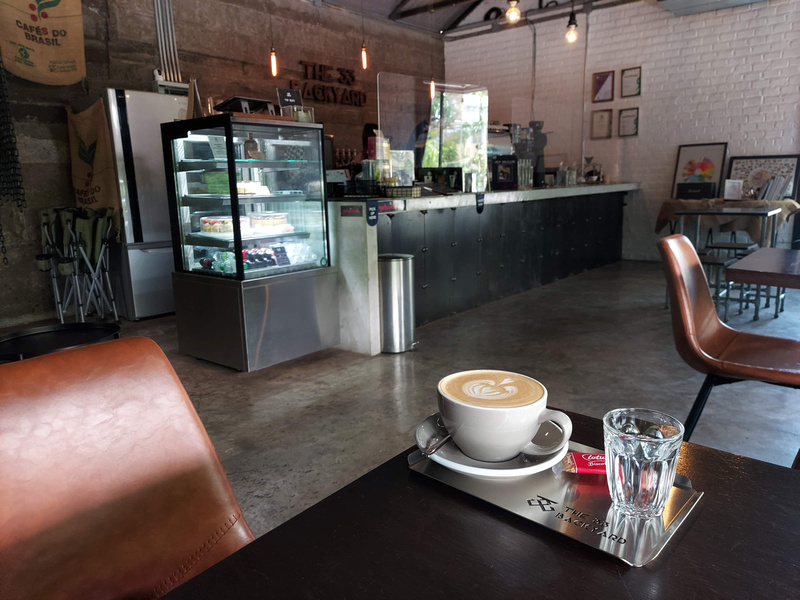 Triple S Cafe was my favourite cafe in the city area. 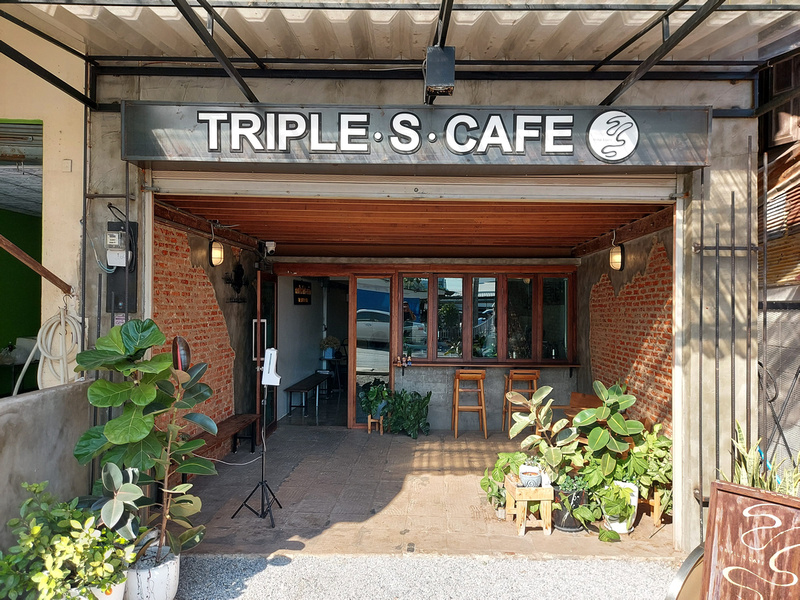 This being Thailand, there is of course a night market in Mukdahan. 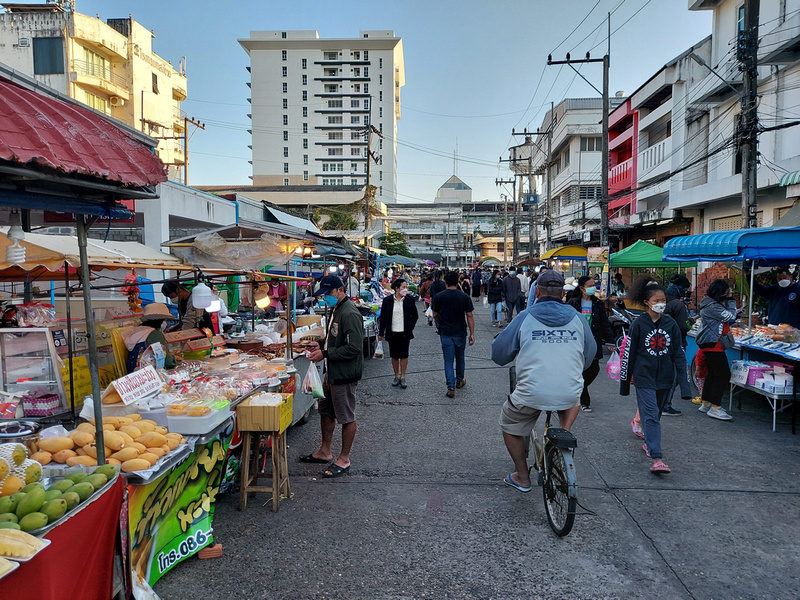 There were so many delicious things to try, but the market was only catering for takeaway buyers. I ended up eating walking food because there were no tables. This might have been a pandemic thing where dining facilities had not been restored. 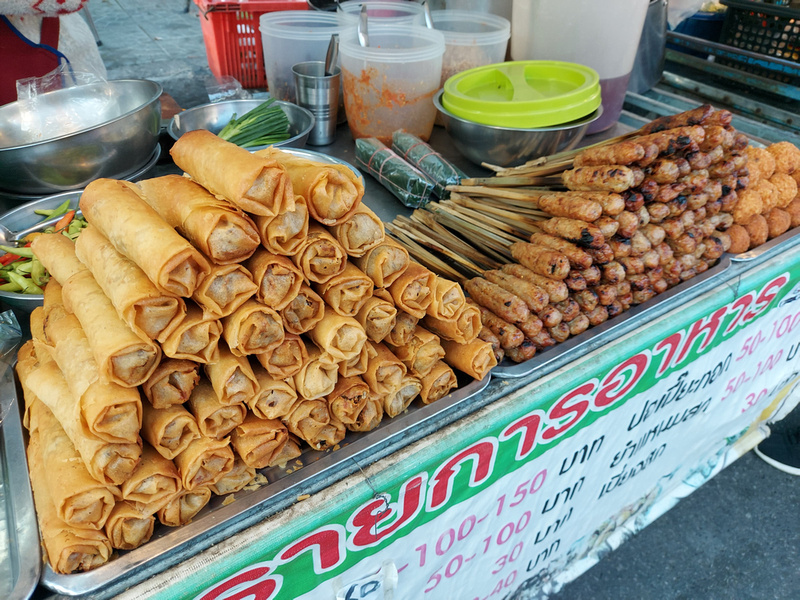 Something that I wasn’t expecting was the number of Vietnamese restaurants here. 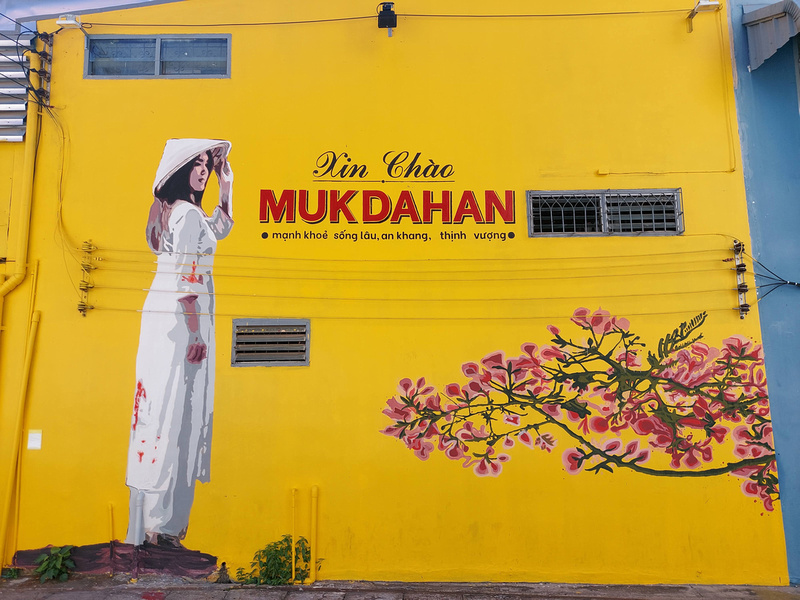 There is a Vietnamese community that settled here during the war years, and there is some Vietnamese-themed artwork around the city. 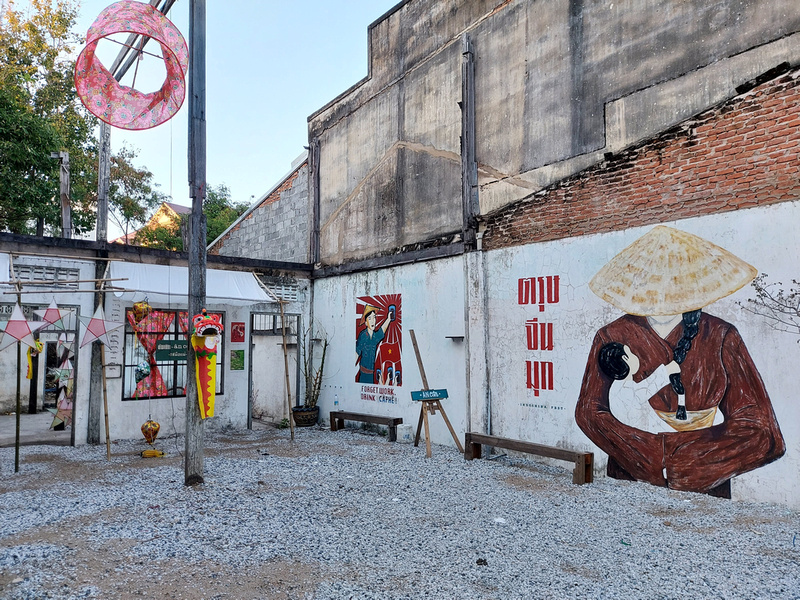 I was feeling a bit homesick for Saigon (Vietnam was still not open at this point either) so when I saw Krua Saigon Restaurant I stopped for lunch. The restaurant signage is in Thai, so I would not have known it was a Vietnamese restaurant if it wasn’t for Google Maps. 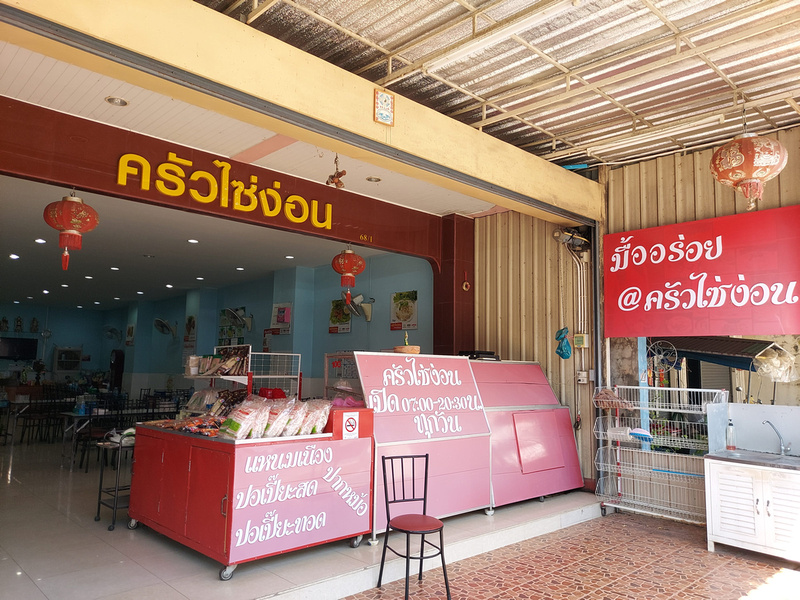 One of my food rules is that I don’t have Thai food in Vietnam, and I don’t have Vietnamese food in Thailand. I’m in both countries often enough, and I know that it is never quite as good as having it in the source country. 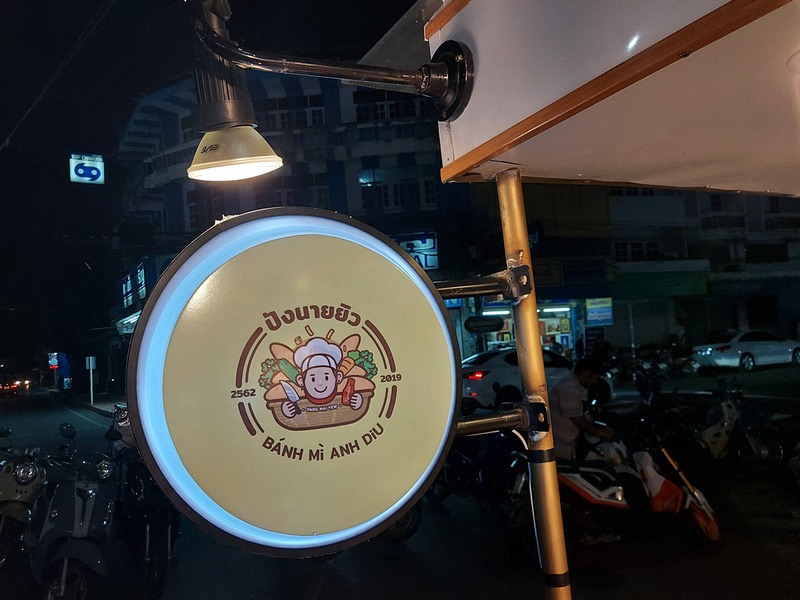 The menu items are modified for local tastes and ingredient availability. I’ve known this since visiting Vietnamese restaurants in Melbourne, and it is the same everywhere. Having said that, I enjoyed breaking my rule and coming here to experience this little pocket of Vietnam in Isan. 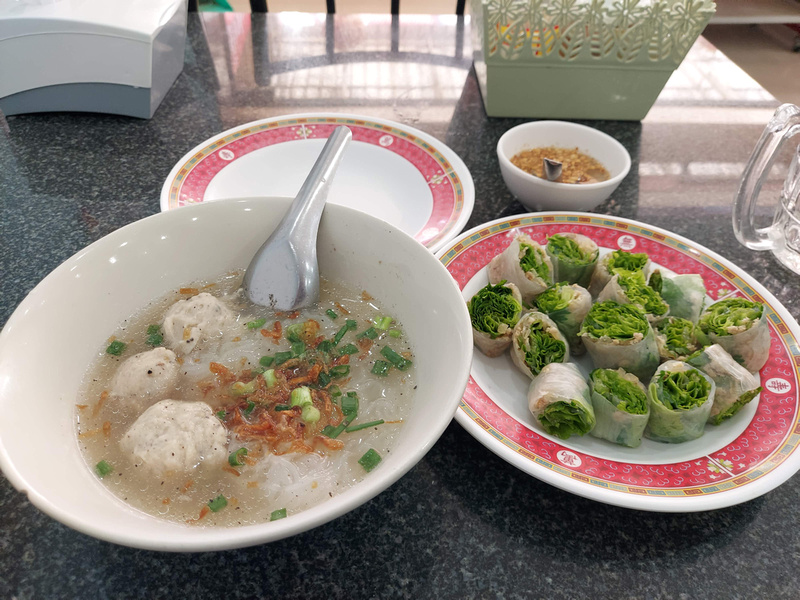 From Mukdahan I got a minivan to Nakhon Phanom. Minivan is one of my least favourite forms of travel, though in this case it was acceptable at 107 km. If all goes to plan, the next time I visit Mukdahan will be by train. 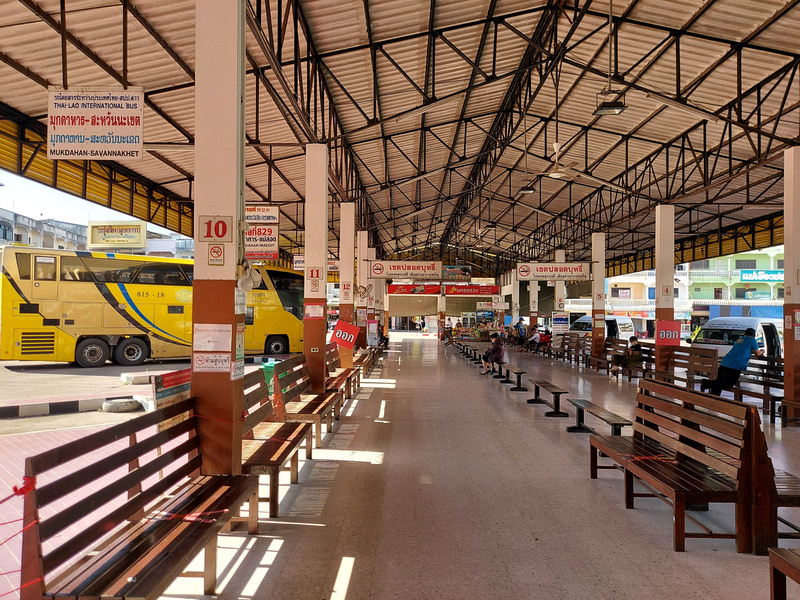