Makassar is the gateway to Sulawesi and is considered as a major culinary destination of Indonesia. Even if you are a frequent traveller to Indonesia you may be surprised to find cuisine here that is not found anywhere else in the Indonesian archipelago.

During my visit I sampled a selection of local dishes as well as some food familiar across Indonesia. I’ve also listed some foods to try that I didn’t get round to sampling (maybe next time!) 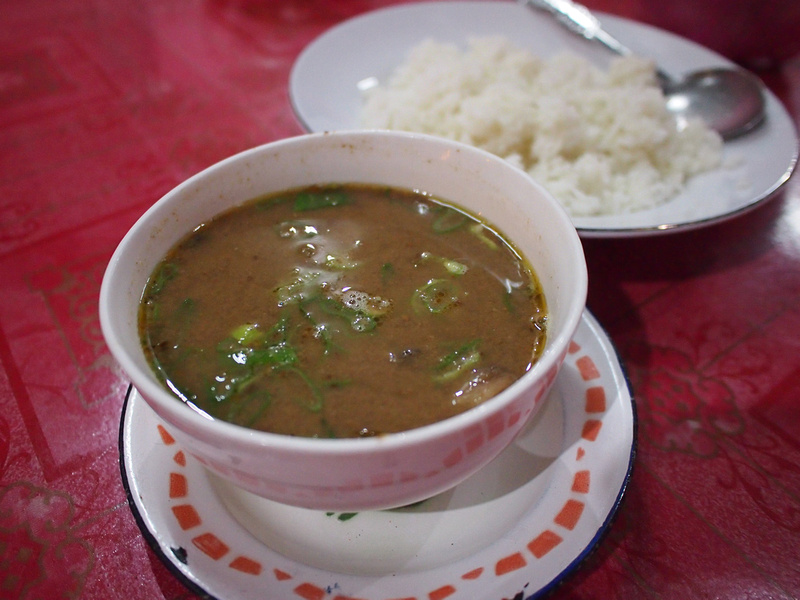 As this is a Makassar food roundup it seems logical to start with a dish named after the city.

Coto Makassar is the traditional Makassar soup that includes meat and offal. The soup is served with rice cake wrapped in leaves, or with rice. The rice cake is a great way to soak up the tasty soup broth.

You won’t have to go far before you stumble upon a warung serving the signature dish of the city. 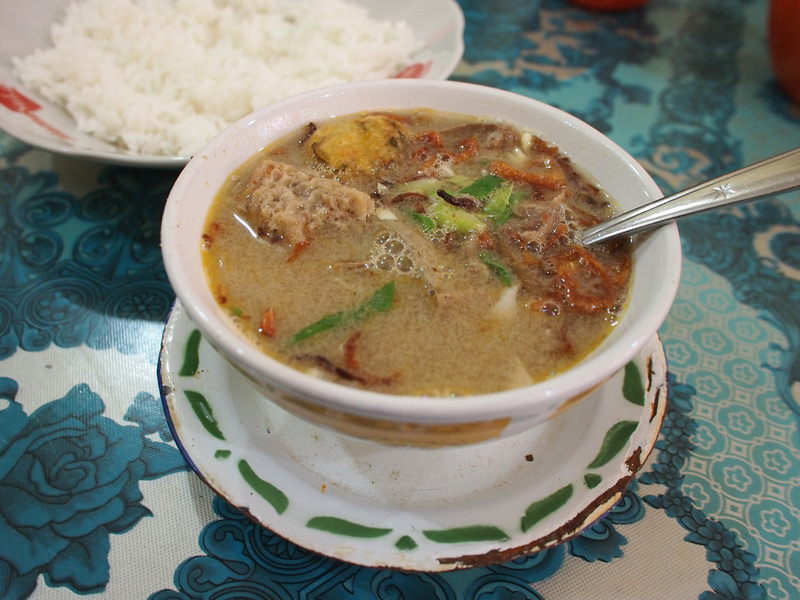 Sop Saudara is a traditional soup of South Sulawesi. Like Coto Makassar it is made with meat and innards such as liver and lung. The meat and offal components of the soup are added separately, so if offal isn’t your thing you may choose the ingredients you want in your soup. 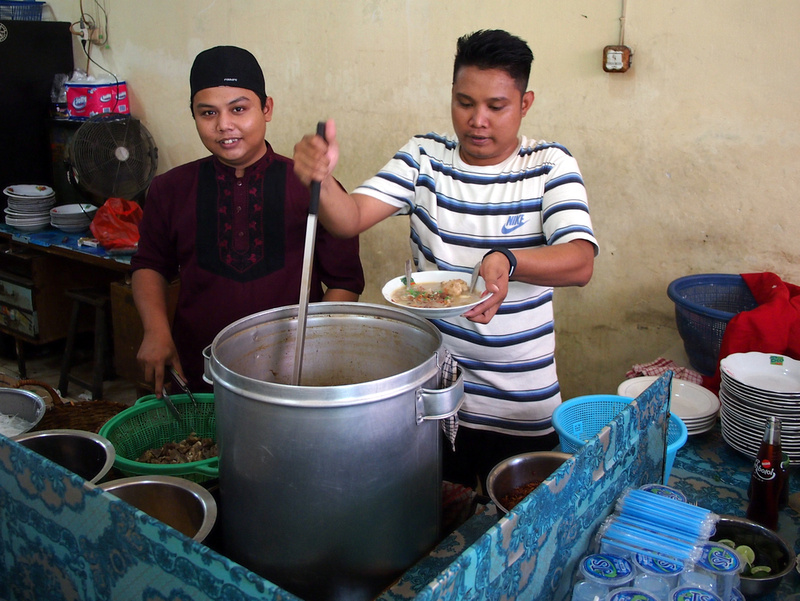 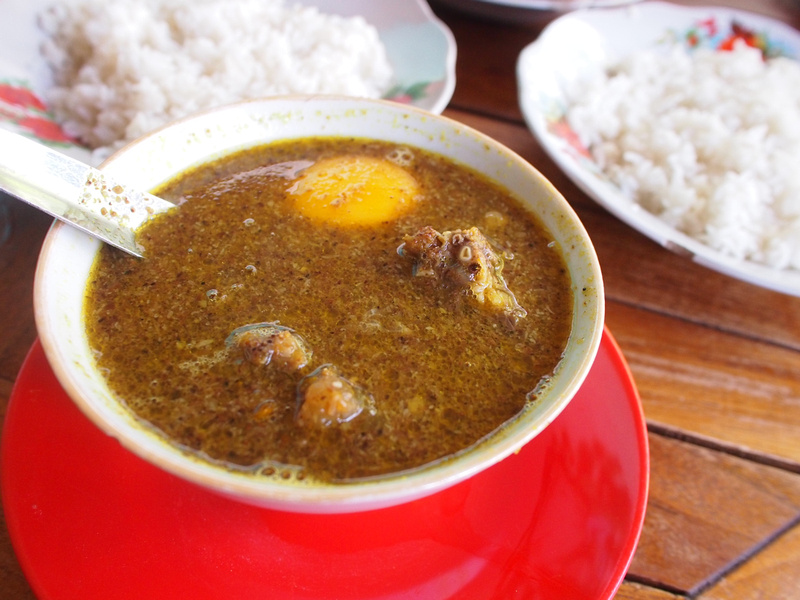 Pallubasa was my favourite meal in Makassar. Pallubasa is a beef and coconut specialty of Makassar. I visited Palbas Serigala on 54 Jalan Serigala which is the most famous Pallubasa restaurant. I arrived at 1.30pm and there was still a queue to be seated.

Offal is also used in the soup but I suspect that being a foreigner they knew I would prefer beef-only. At this restaurant they put an egg yolk in the soup which added to the visual delight of the serving. I scooped out and broke on my rice.

This was so good that I felt a little sad when I finished because I knew I wouldn’t be having it again for the foreseeable future. I recalled that Dr Seuss quote: “don’t cry because it’s over, smile because it happened.”

The waiter came around and asked if I would like another bowl and I said yes. I never eat a second bowl of something good because it is never as good as the first. There was a long wait of people there so I cancelled my order. I now regret not having that second bowl. 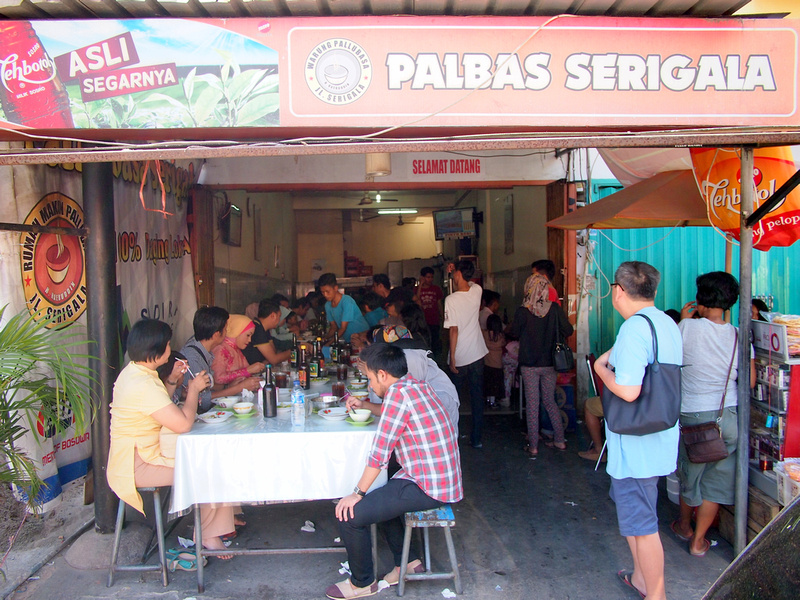 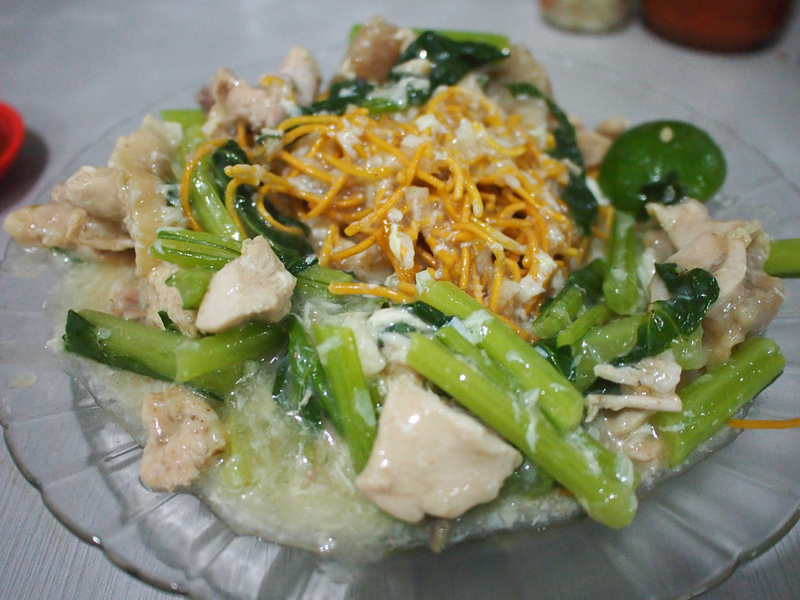 Makassar has a large Chinatown area with lots of great places to eat. A popular dish around here is Mie Kanton, which is crispy fried noodles served with chicken or pork.

I visited Mie Anto on Jalan Lombok who specialise in Mie Kanton. The restaurant is on a corner and you can see the chef in action. 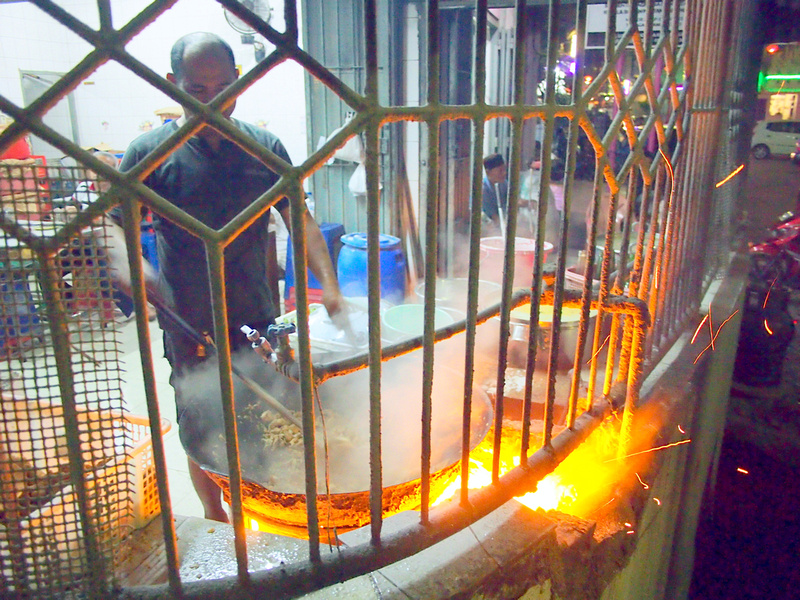 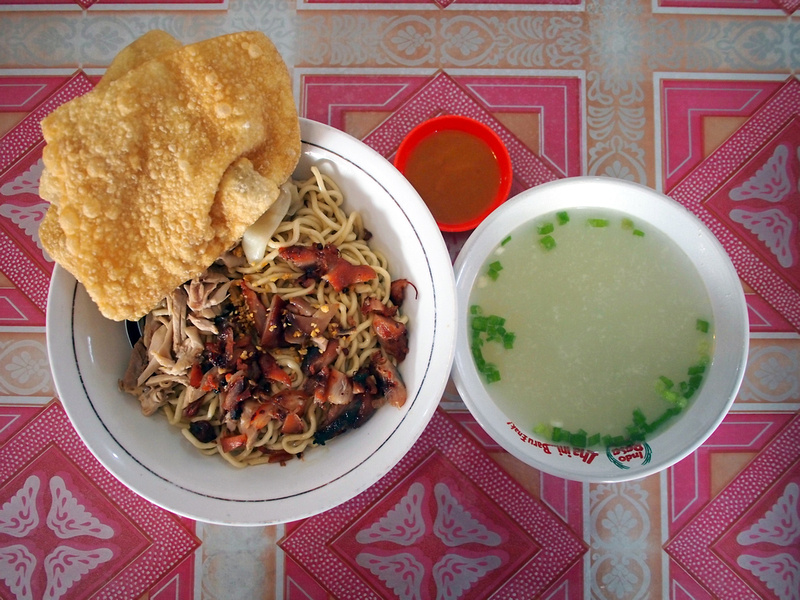 Pangsit Mie is a chinese-syle noodle served with wantons, BBQ pork, and chicken, with a soup broth served on the side. Pangsit Mie can be easily found around Chinatown for breakfast. I visited Pangsit Mie Sulawesi on Jl. Sulawesi. 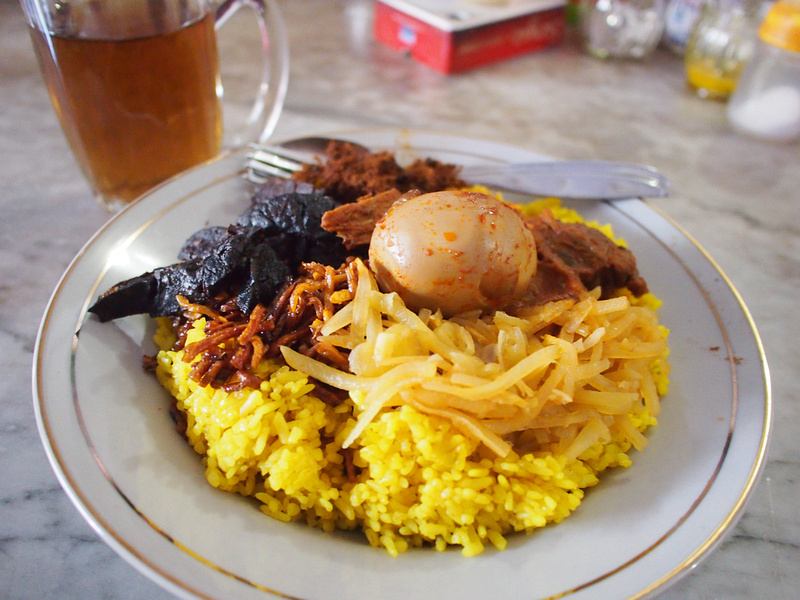 Nasi Kuning (yellow rice) is a rice dish that is cooked with cooked with coconut milk and turmeric. It is served with a variety of meat and egg options which which you can choose.

I visited Nasi Kuning Riburane, which is on the corner of Jl. Sulawesi and Jl. Riburane. 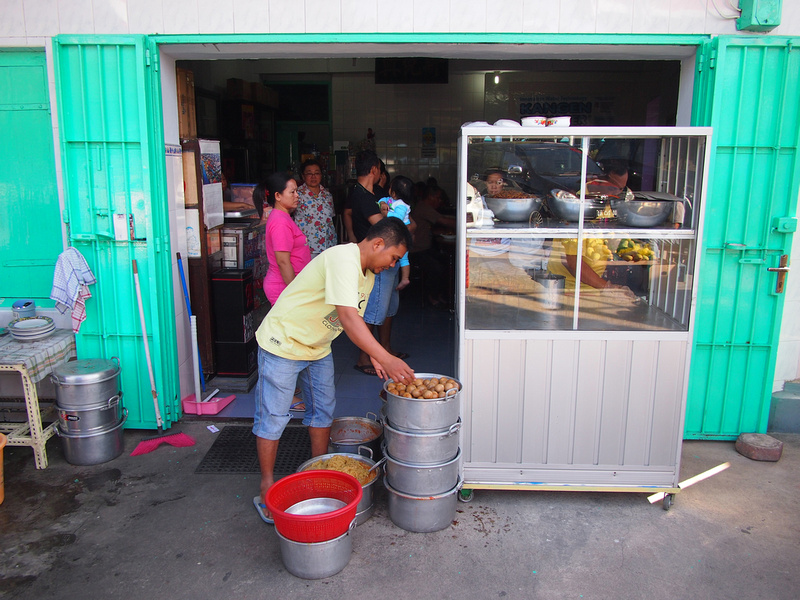 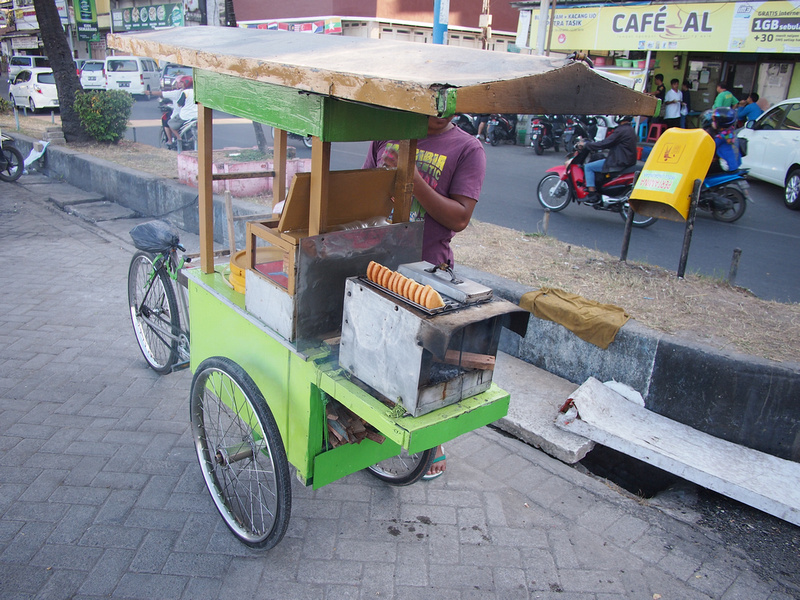 Buroncong is a breakfast cake made of flour and grated coconut. It can be found at Losari Beach and at Jl Bacan market in Chinatown in the morning. Look for the mobile carts with a firewood stove. 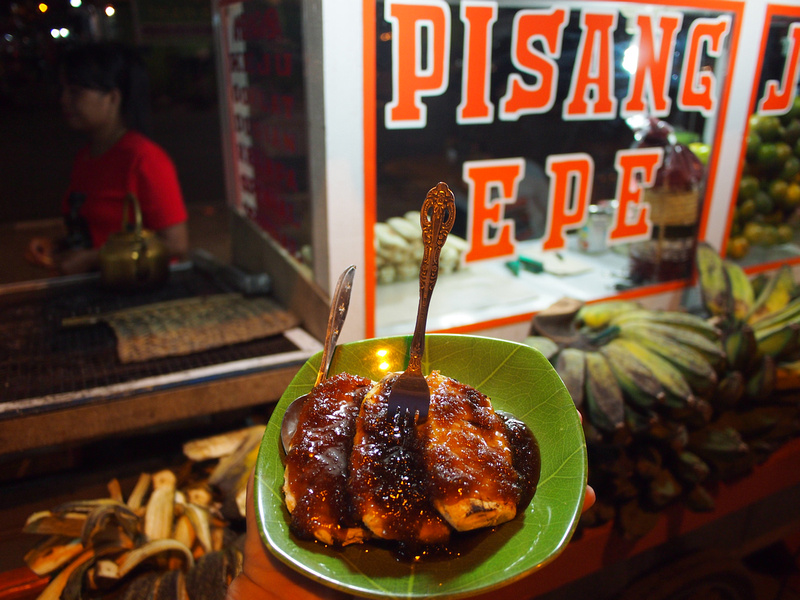 No visit to Makassar is complete without having a stroll along Losari Beach at sunset. There is no actual beach here but the waterfront faces the west, making it the ideal place to watch the sunset over the sea.

In the evening Pisang epe vendors line the promenade so pick a spot and take a seat.

Pisang epe is pressed grilled banana, served with melted palm sugar. As it was my first I went for the original flavour but there are several flavour toppings available, including chocolate, durian, and cheese. 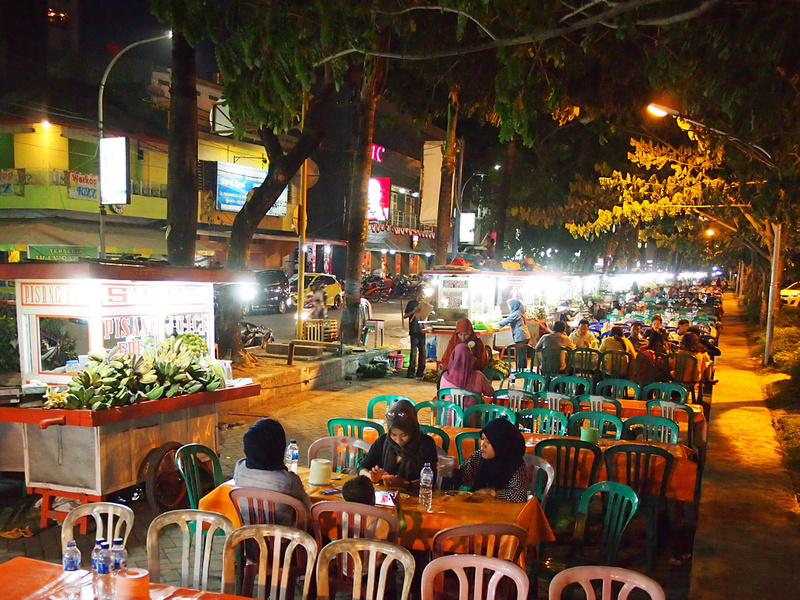 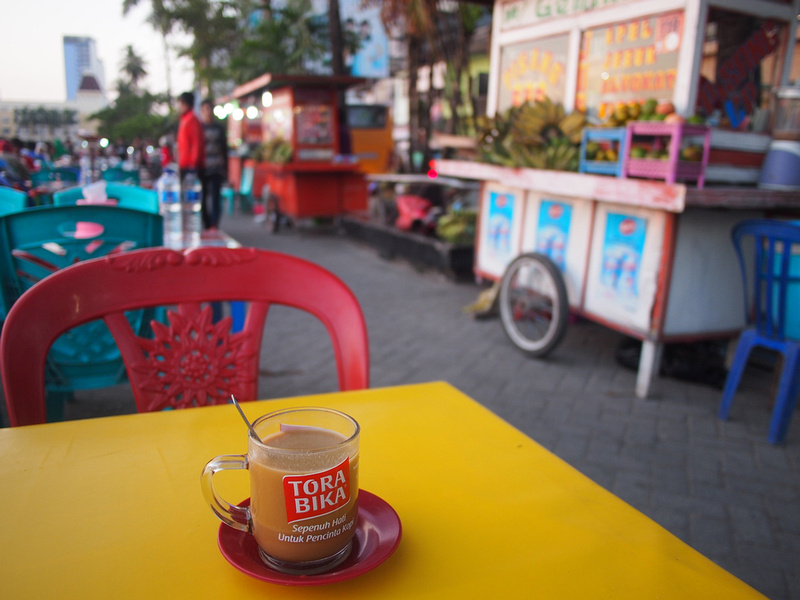 Sarabba is a specialty of South Sulawesi that you should also seek out on your visit to Makassar. This is a spicy hot drink that includes ginger, palm suger, pepper, and coconut milk.

The easiest place to find Sarabba is among the Pisang Epe vendors on Losari Beach. You can also buy instant satchels at some of the souvenir shops.

Kapurung – A South Sulawesi dish comprished of sago flour that is formed into balls in a soup of fish and vegetables.

Pallumara – A spicy and sour fish soup that is a Bugis specialty.

I travelled to Makassar as a guest of SilkAir, who offer flights from Singapore to Makassar.