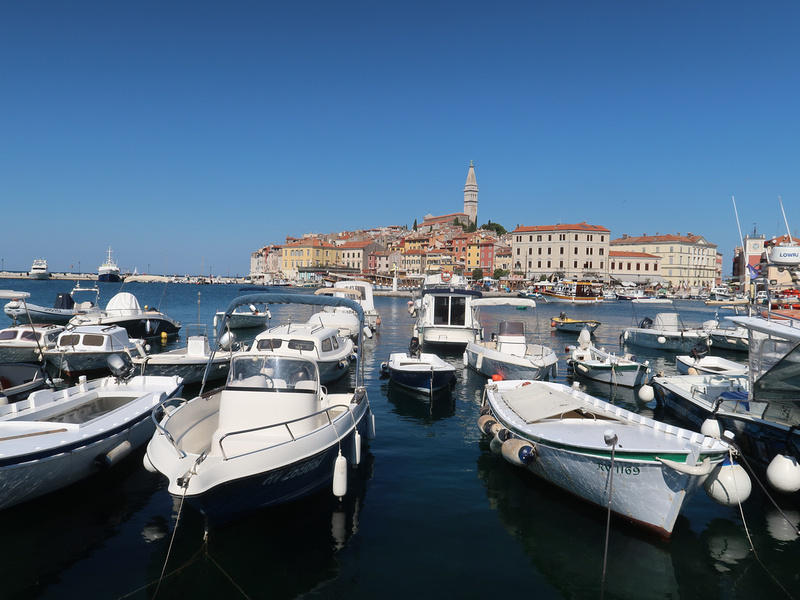 Croatia has become a popular destination for digital nomads, and at the start of 2021 they made history by being one of the first countries in the world to offer a digital nomad visa.

Croatia is more affordable than Western Europe, and being outside of the Schengen Area makes it a convenient place to do a “visa run” for those who have outstayed their 90 days within Schengen Europe. Croatia has an amazing coastline jam-packed with historical sites, so choosing where to go can be overwhelming. In fact, its coastline is comically absurd if you just look at the map without knowing the geographical or political context.

I first visited Croatia in 2012, where I did a train trip from Zagreb to Split, and then a bus to Dubrovnik. This time I was curious to go back and see more of the coastal cities and what it would be like to be there as a digital nomad. I picked out locations based on size and what I thought might be appealing features for a digital nomad hub. I was also working on a project about railways in the region, so my trip was guided by where the rails go.

These are the places I visited, and some general thoughts on Croatia follow afterward. 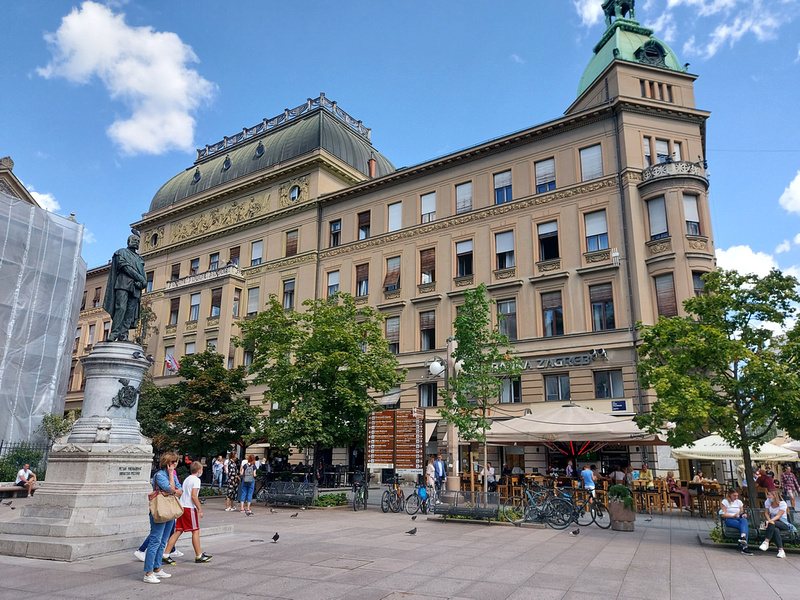 I said Zagreb was underrated in 2012, and I still feel that way now. Not that I mind, as it’s a great respite to feel like you are one of the few visitors in the city when you know the coastal cities are packed. Here is my full trip report for Zagreb. 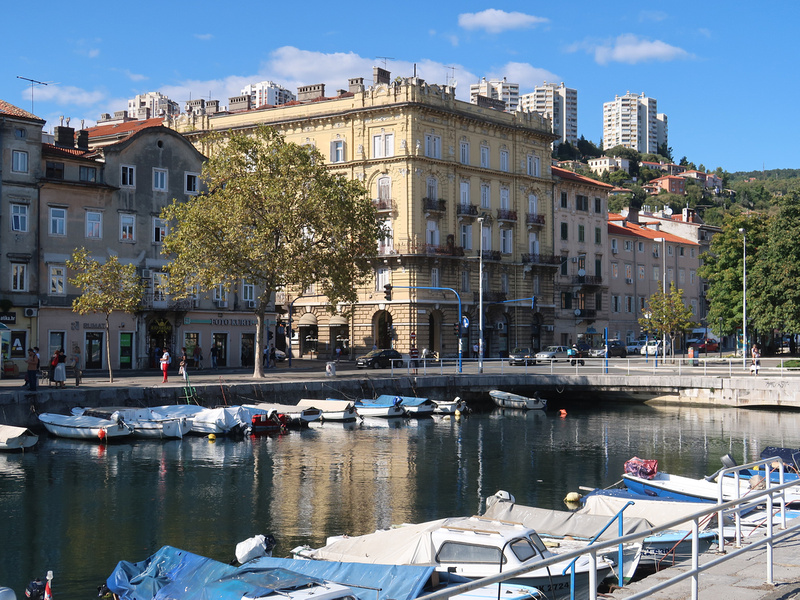 Rijeka turned out to be the most surprising city for me on this trip. It’s a functional working city with beautiful architecture, and it’s not overwhelmed with crowds. This is one of those cities that could become more known in the future. It has train services to Zagreb and Ljubljana, and it has its own airport. At this point there is only one scheduled flight (Croatia Airlines to Munich) among the seasonal charter flights. If it had the same hipster cafe scene of Zagreb and some more regular international connections it could become a mini nomad base.

Here are my thoughts and observations on Rijeka.

Pula is the largest city on the Istrian Peninsula. Pula is home to one of the best-preserved Roman amphitheatres, which is worth visiting for that alone. 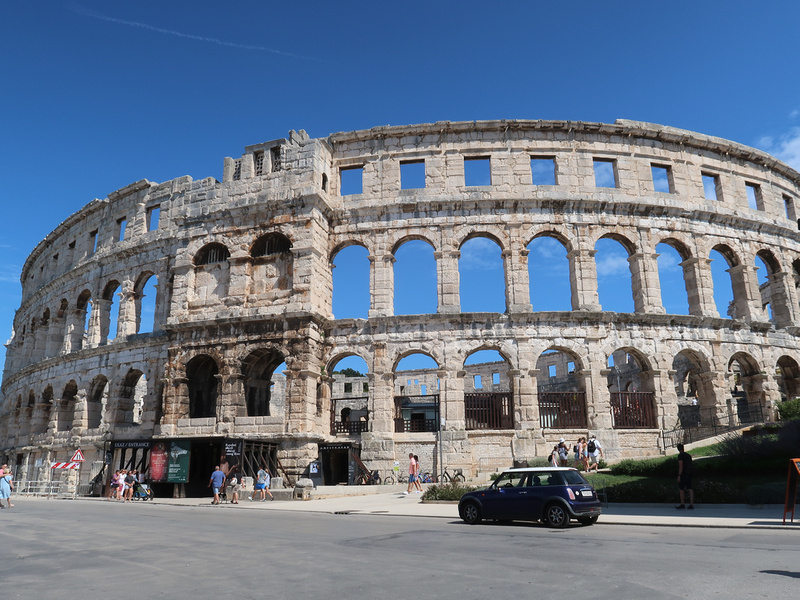 Everywhere I had been in Croatia so far has had some form of free public wifi. Not that you would rely on it to work, but this should be a feature of every city in the future. 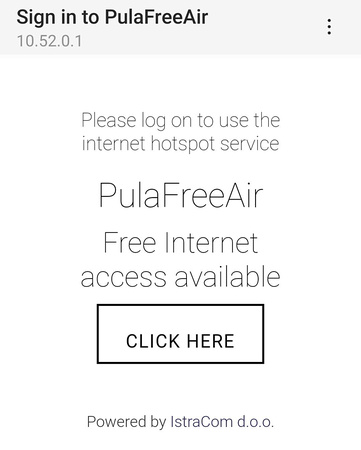 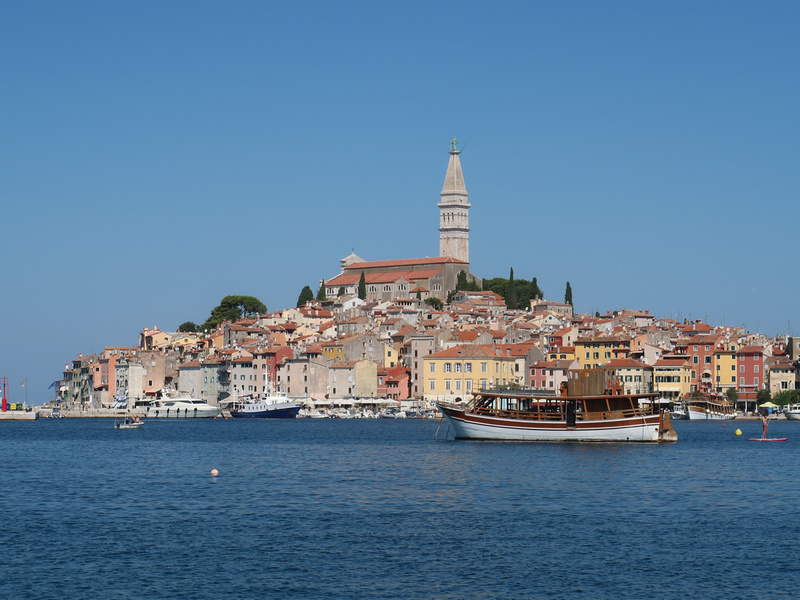 Rovinj was voted as the second most scenic Mediterranean harbour by the Mediterranean Maritime Heritage Federation in 2013. I don’t know what the most was, but I wouldn’t argue with them. After arriving by bus from Pula I instinctively walked away from the old town to find a sea view first. I found a cafe with a view, which was everything I imagined Croatia to be. 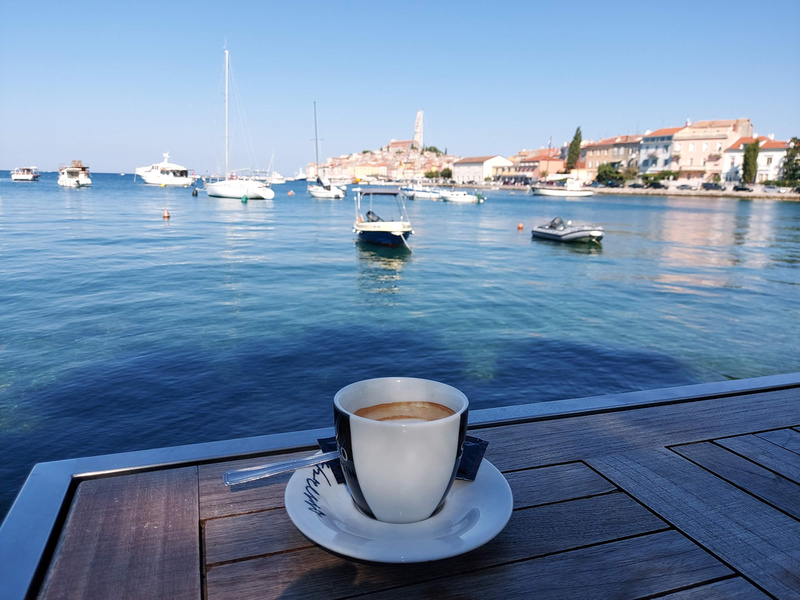 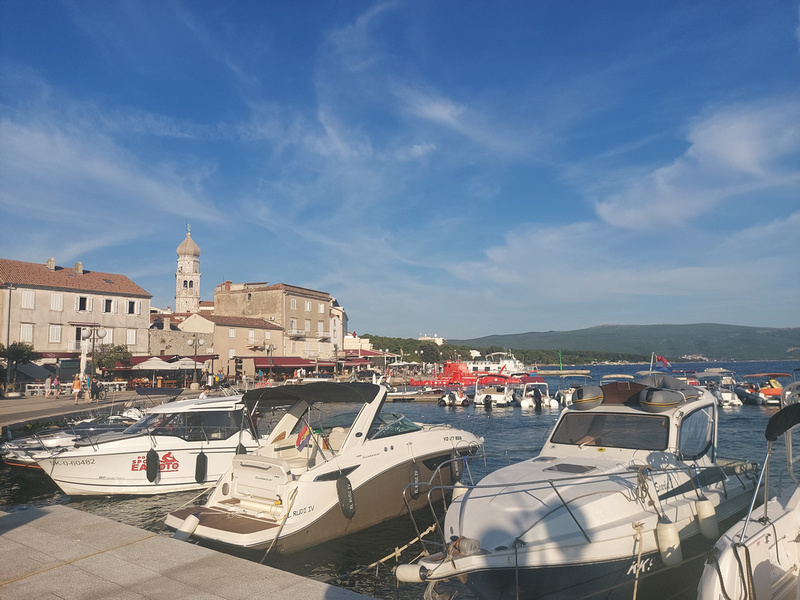 Krk is the only Croatian island that has a bridge from the mainland. Its relative proximity to Zagreb also makes it one of the most popular domestic destinations. It’s also the location of Rijeka airport (Krk is in Primorje-Gorski Kotar County, which Rijeka is the county seat), adding to its international appeal.

I stayed in Krk old town, which is the most historically interesting point on the island. 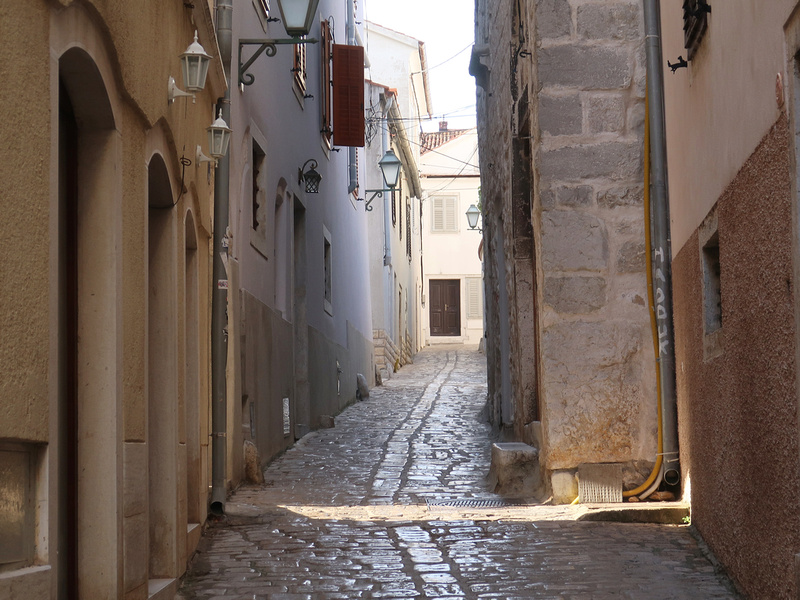 From the old town, I did a day trip to Baska in the south of the island. This is more of a beach resort town, and it was busy. 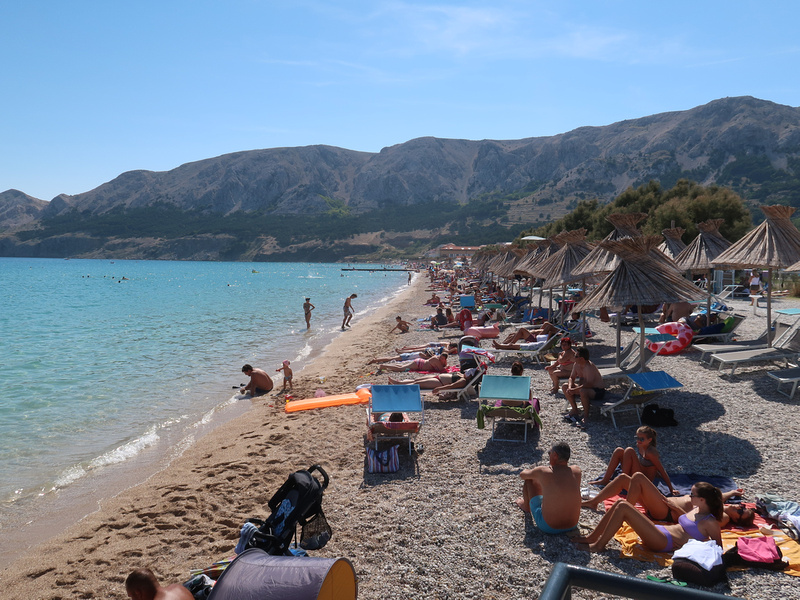 At this point I should talk about the “beaches” of Croatia and the waters of the Adriatic Sea. 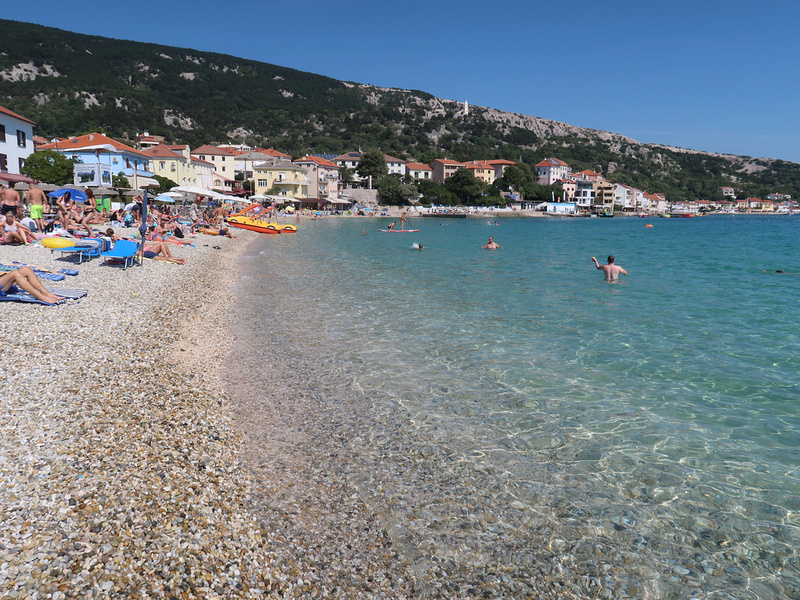 I’ve spent enough time in Europe over the years to know what I like, and I prefer old towns over beach resorts. In Australia, we have beaches in abundance (our national anthem proclaims we are girt by sea) but we severely lack in old towns with cobbled streets.

When I see these stony beaches I’m just not interested in walking on them. I found myself dreaming of walking on a sandy beach in Kerala rather than these cobbled stony beaches of Krk. I visit these busy Euro beaches for the anthropological experience. What makes these humans strip down and lie on these stony surfaces? 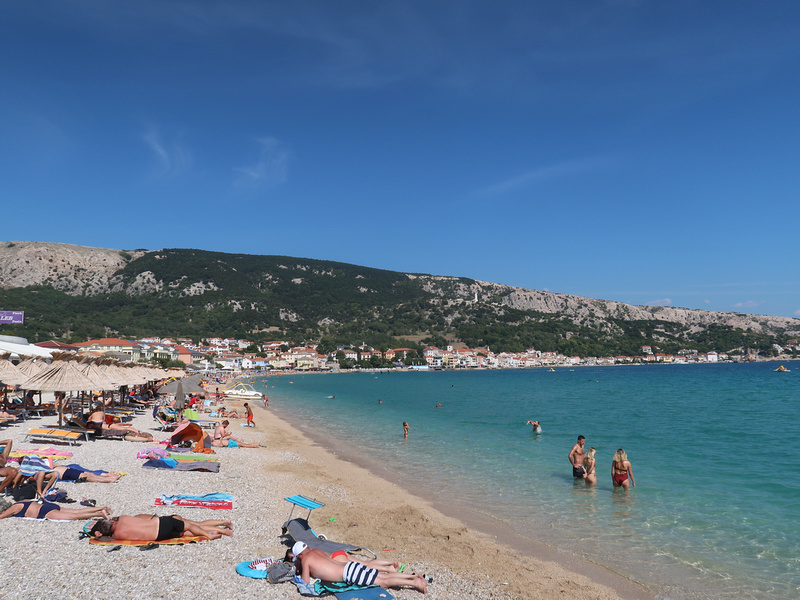 The one thing that is indisputable is how beautiful the water is here. The clear blues on a sunny day really put you in a good mood. I also see the appeal of sailing around the islands here. My only problem is finding enough people I like who I would want to be on a boat with for a week. 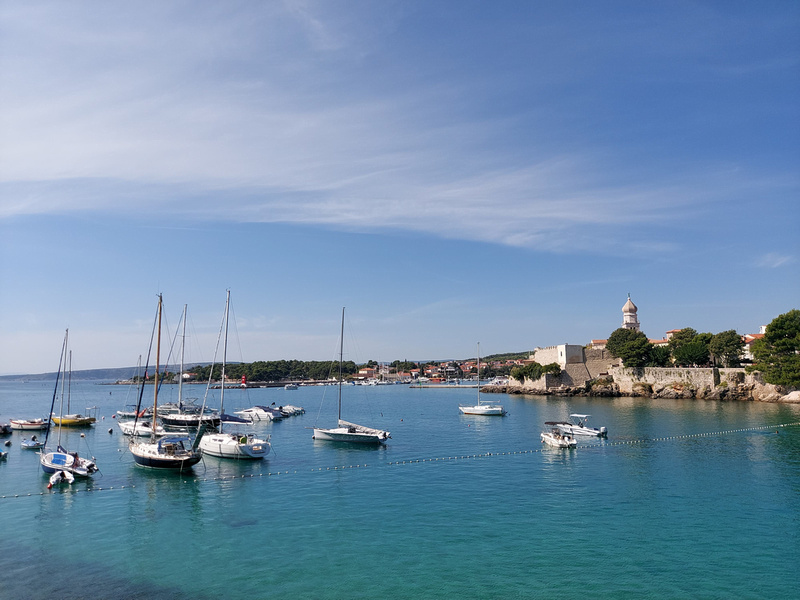 Zadar is another historic port city on a coast littered with historic port cities. It’s a busy ferry hub for islands, so if you like small city living with Adriatic island adventures at your doorstep, then this is a place to consider. 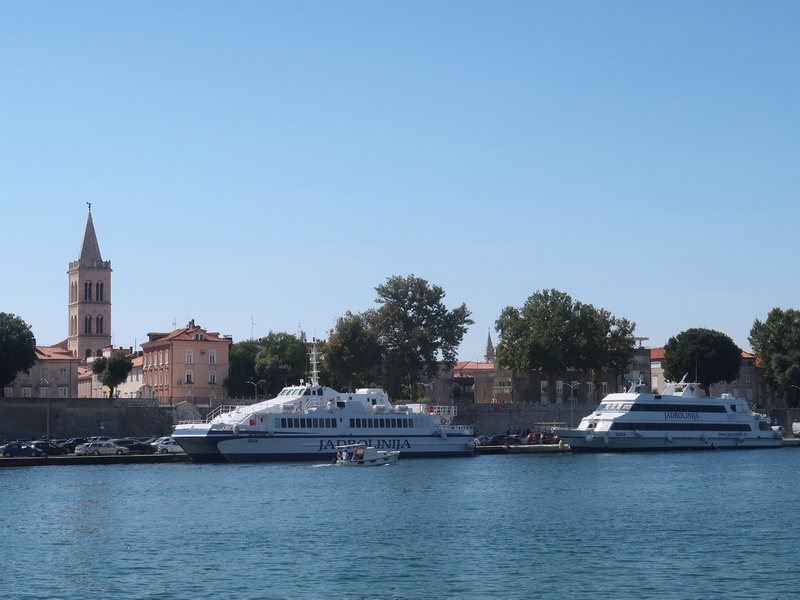 I was here just before the first digital nomad village in Croatia opened, which is offering affordable accommodation in an environment of likeminded people. I stayed at an Airbnb for 4 nights, but if this was an option I might have considered the weekly option. 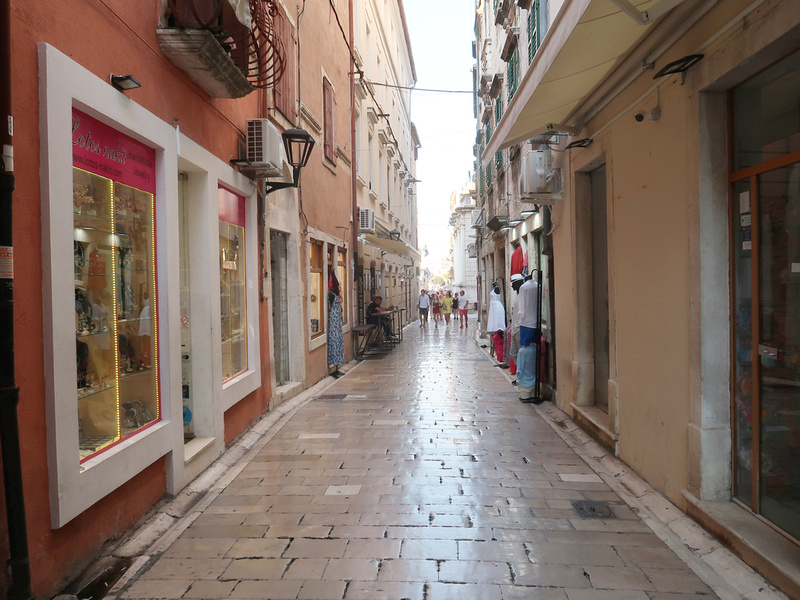 [An alley on the old town of Zadar.]

There is a railway here that branches off from the main Zagreb-Split line, but it is no longer operating for passenger services. Zadar has an airport with mostly seasonal flights from around Europe. 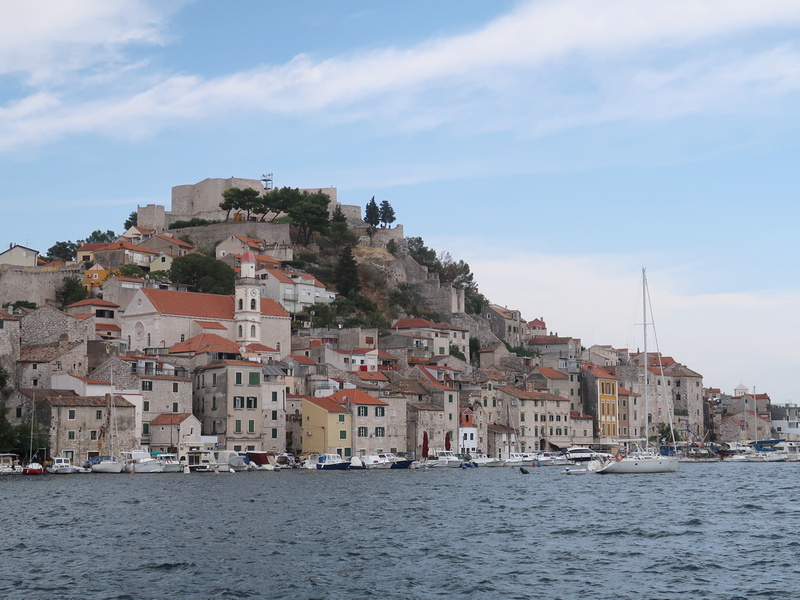 I hadn’t heard of Šibenik before this trip, and like Rijeka, my visit was based on the fact that there is a railway here. This is a branch of the Zagreb-Split line, and it runs shuttles that connect to the Zagreb or Split services. I went to the station and saw that the train was operating, but neglected to check the weekend schedule. When I arrived at the station I found out that the train wasn’t running, so I didn’t end up getting the train to Split. 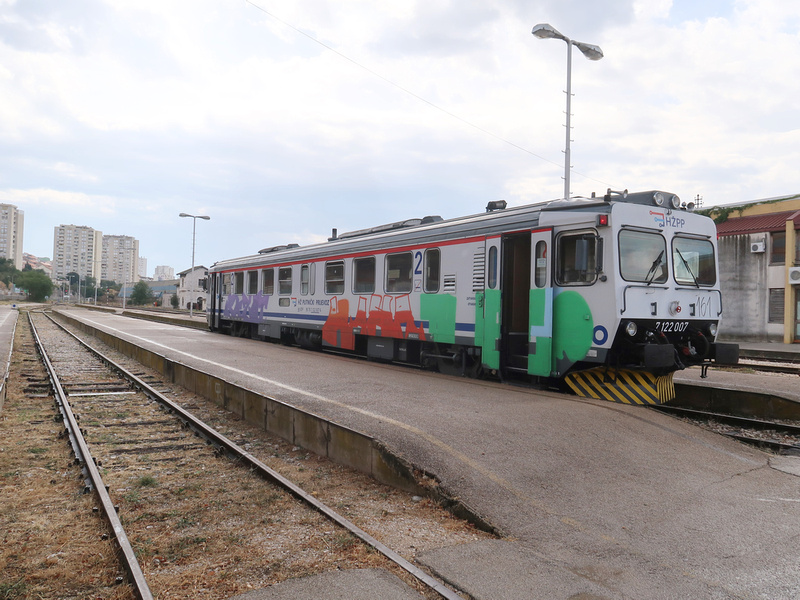 I’m glad the train lured me here though because this is a great little city. It has an old town on a hill overlooking the harbour, and on bigger hills are forts that look down over the old town. The harbour doesn’t receive the big cruise ships so it doesn’t feel as overrun with tourists. 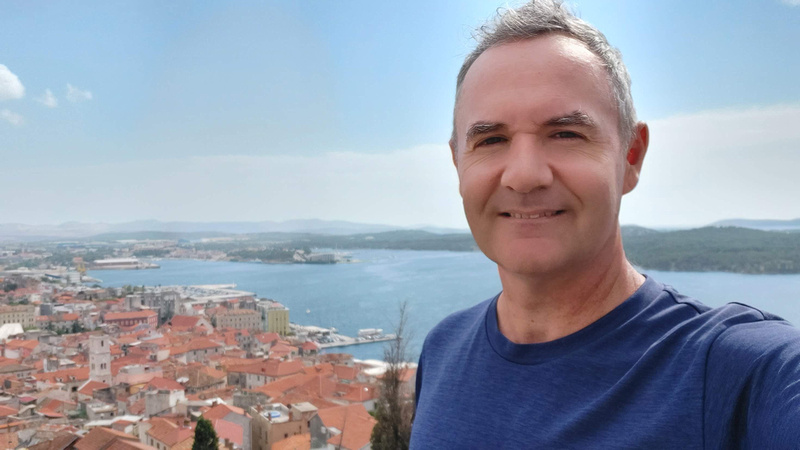 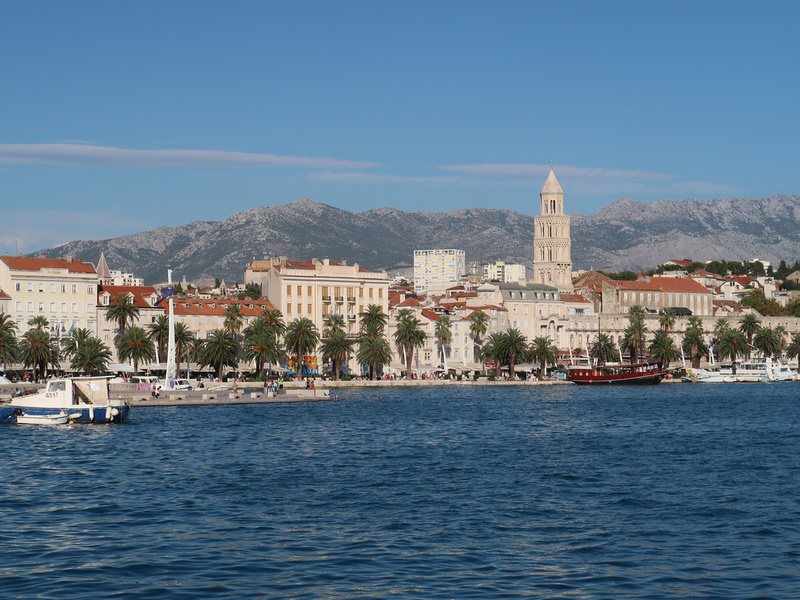 Split is the second-largest city in Croatia, so I stayed here longer to see what the feeling was like to live here. Even though it is much smaller than Zagreb, it’s far more touristy. Split would be a good option to live if you want to spend your spare time exploring islands or if you enjoy water activities. Here is my full Split trip report. 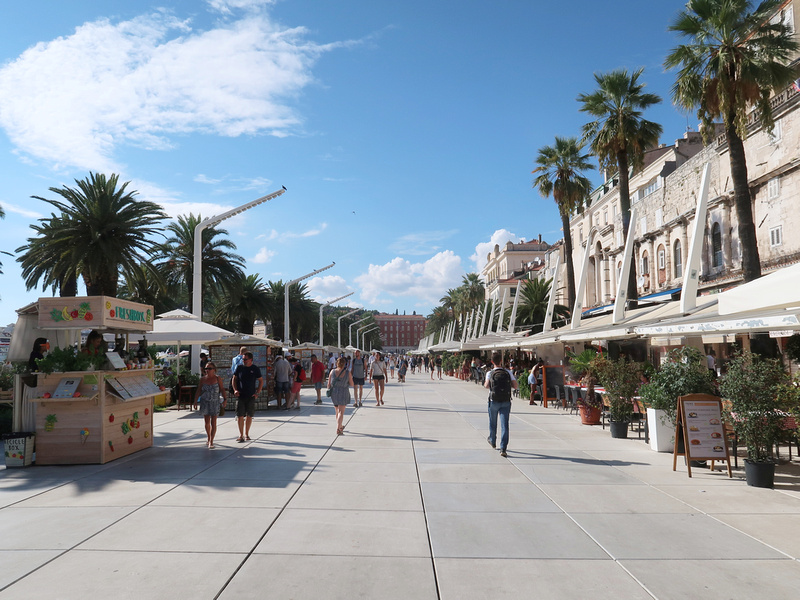 One thing I found after a month in Croatia was that I was getting old-town fatigue. I was seeing so many of these historic Adriatic ports, and I was starting to not appreciate them.

If you lived in Split you could pace yourself by working here and then doing little excursions, rather than trying to see everything in just a short time. This “old-town fatigue” is a phenomenon I’ve experienced across Europe, which is why I like to pace myself. I don’t need to see everything in one trip. 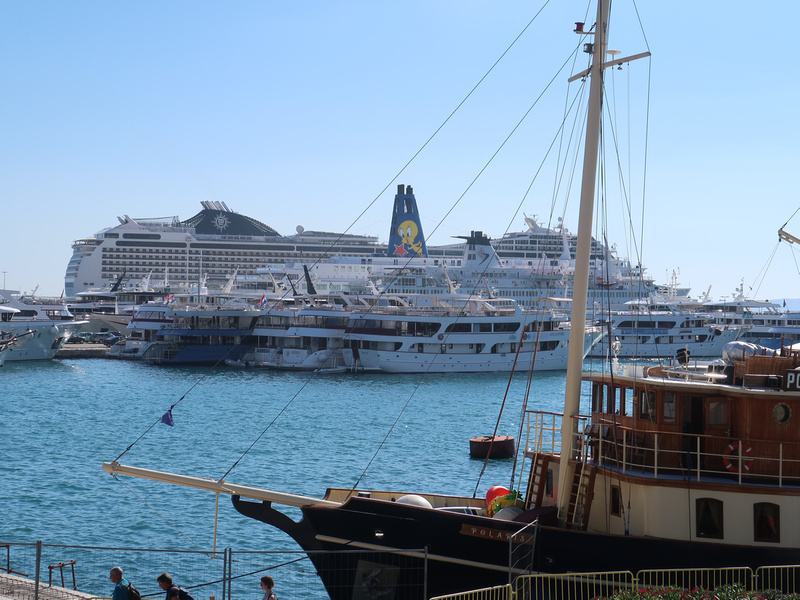 I ended up spending 5 weeks in Croatia, and the longest I stayed in one place was in the two biggest cities: Zagreb (11 nights) and Split (8 nights). As I mentioned at the start, I had been to Dubrovnik in 2012 so I didn’t go this time as it was out of my way. If you’ve never been then you should not miss it, but it does have an overtourism problem and by the end of this trip I was touristed out.

I had considered getting a monthly rental in Zagreb but there wasn’t much available at short notice. As I posted in my September update, this trip was hastily arranged within a week. I was also in the mood to travel around, so this turned out to be a good opportunity to see more of Croatia.

If I was going to do anything differently it would have been to plan further in advance. Travel planning is like a hobby for me, so I would have enjoyed making an itinerary for such a long trip. I like working out where to go, how to get there, and where to stay. I found that my lack of planning meant I had to backtrack when I could have taken a ferry somewhere else if I planned on the right day. There are lots of ferries crisscrossing the islands, but they don’t all run daily. September is the last month of the peak season as well, so I didn’t have the first pick of accommodation.

As I was moving around so much and staying in tourist accommodation I can’t really do a cost of living analysis. For the record, I stayed in private room accommodation and I was spending about €30 per night. Coincidently, the day before I arrived this article about the cost of living in Croatia for one month was published on CNBC. I would say this is representative if you are renting one place for a month (and here is the price for Split on Nomadlist).

Without any planning on my behalf, I just happened to be there in what is probably the best month of the year (September), with glorious warm sunny days. By the end though there were some cold days, reminding me of the seasonality of the tourism industry here. A look at the destinations served by Split Airport shows that most flights are seasonal.

Being one of the first countries to offer a digital nomad visa, Croatia is being progressive in their thinking about ways to diversify from tourism. They also have a great advantage of English being widely spoken. Ironically, I don’t think I would ever apply for a nomad visa because I like being a nomad too much. What I would prefer though are more places like what is being set up in Zadar. If there was a network of nomad-friendly accommodation where I could spend 1-2 weeks at a time, then it would be quite reasonable to spend a few months here at a time.

I had a great time in Croatia, and if/when I go back I know I still have so much more to see. Next time might into the hinterland to cover the reconnection of the Balkan railways. 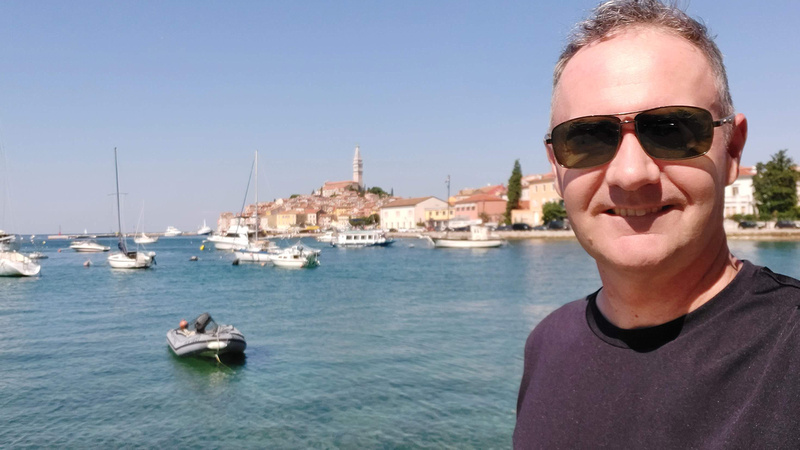