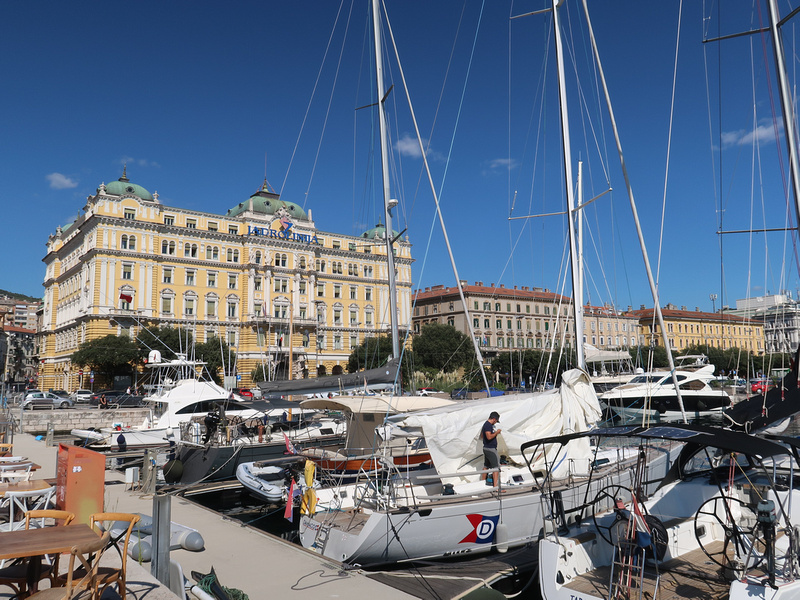 Rijeka is the third-largest city in Croatia (behind Zagreb and Split) and the main seaport. Croatia is better known for its beach and island destinations, so Rijeka doesn’t figure high in tourism promotions. I had never heard of anything about Rijeka before going. My decision to go here was based purely on the fact that it has a direct train from Zagreb. I figured I would go there and work out what to do next. It turned out to be a good choice. 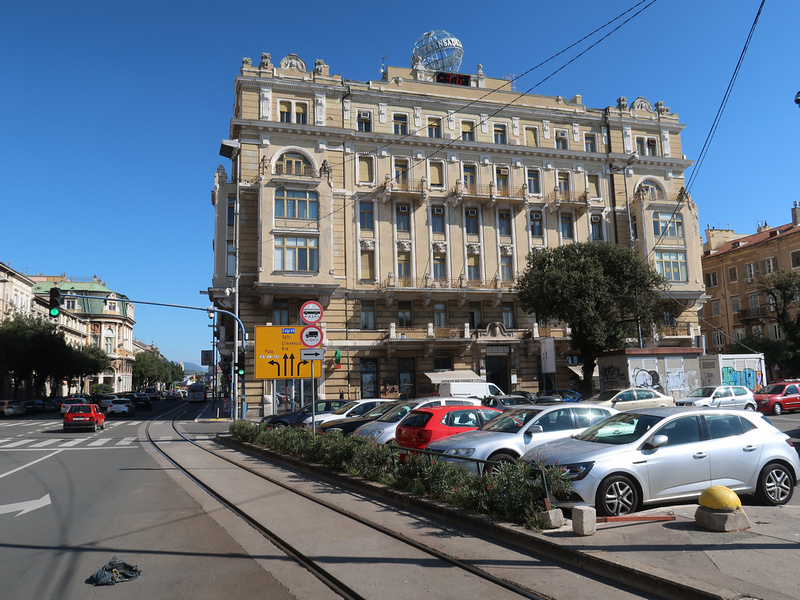 I like Mediterranean port cities, so I kind of knew that Rijeka and I would get along. 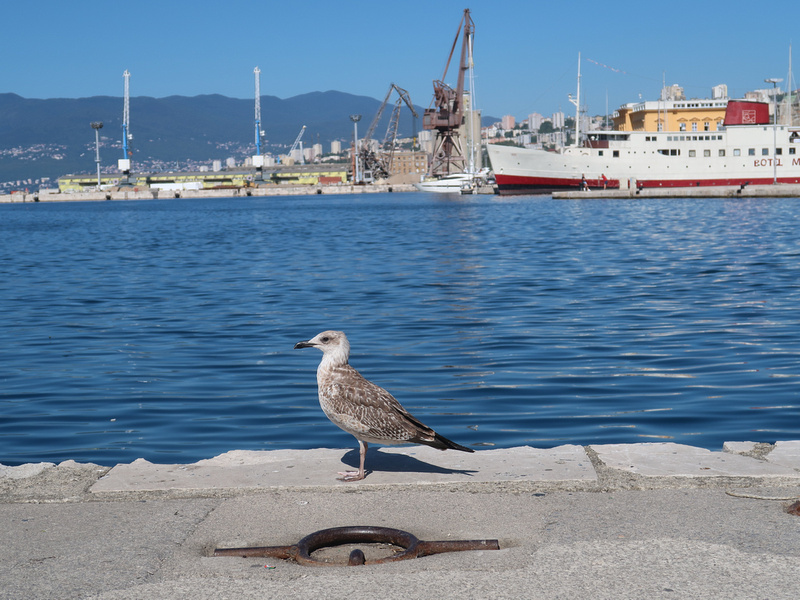 I loved Marseille and Genoa. I’ve never been to Naples but I know I will love it too. What can I say, I love a gritty port city that has passed its glory days. 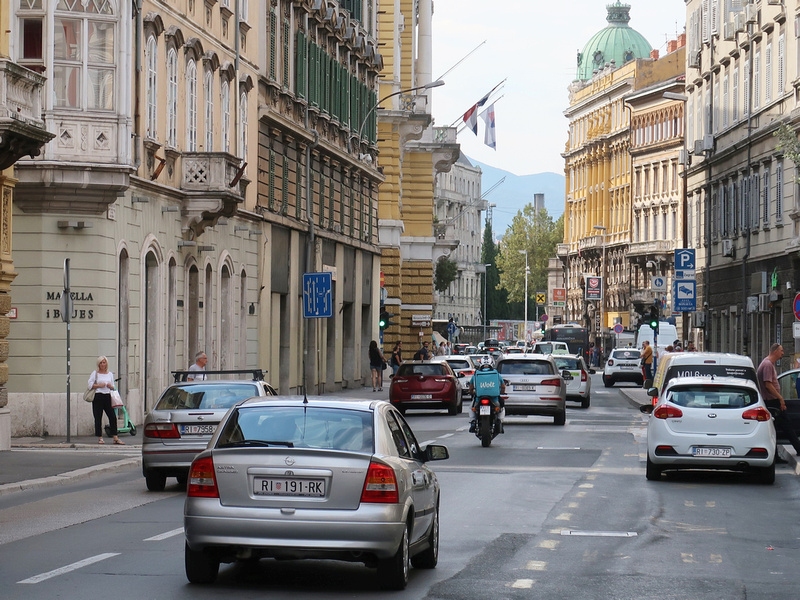 I took a liking to Rijeka as soon as I left the train station. There are so many great buildings there that reminded me of the other great port cities of the Mediterranean. Crumbling old buildings covered in graffiti reminded me of Genoa. 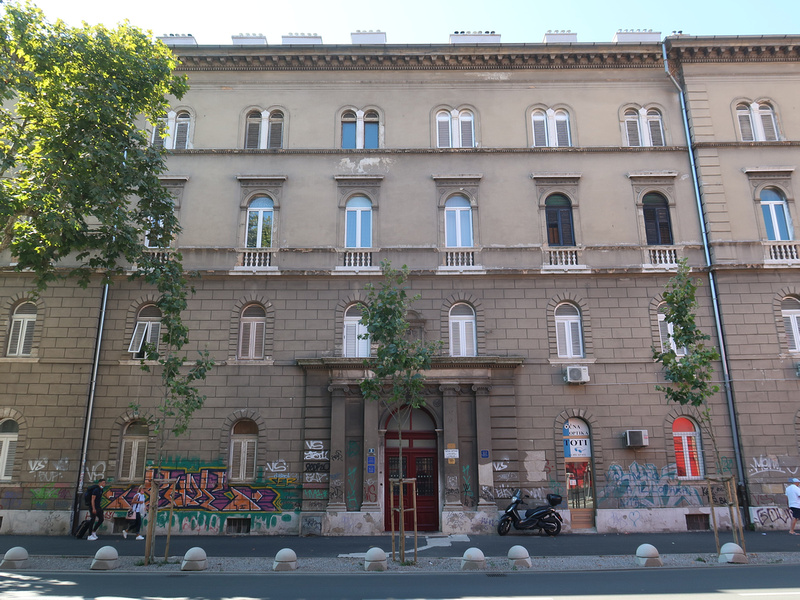 Rijeka also reminded me of Trieste in Italy. Rijeka and Trieste are on either side of the Istrian Peninsula, so that is a better comparison. 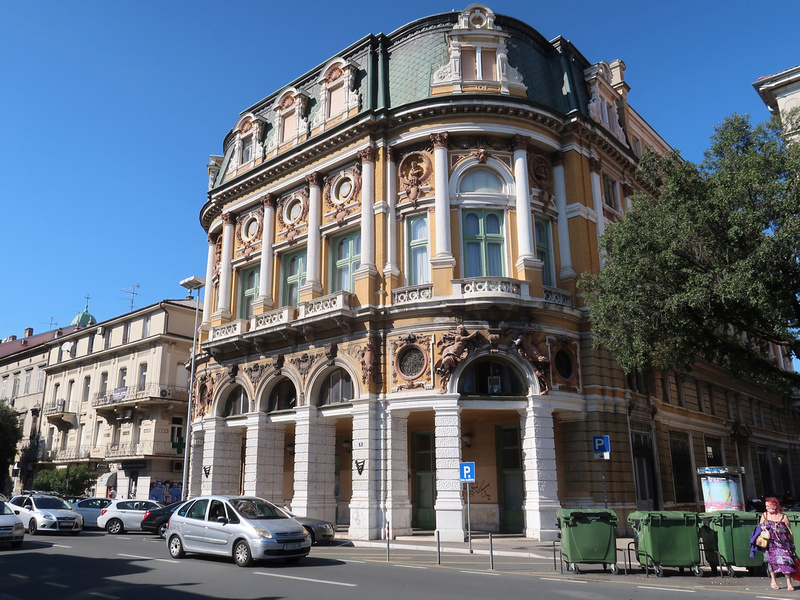 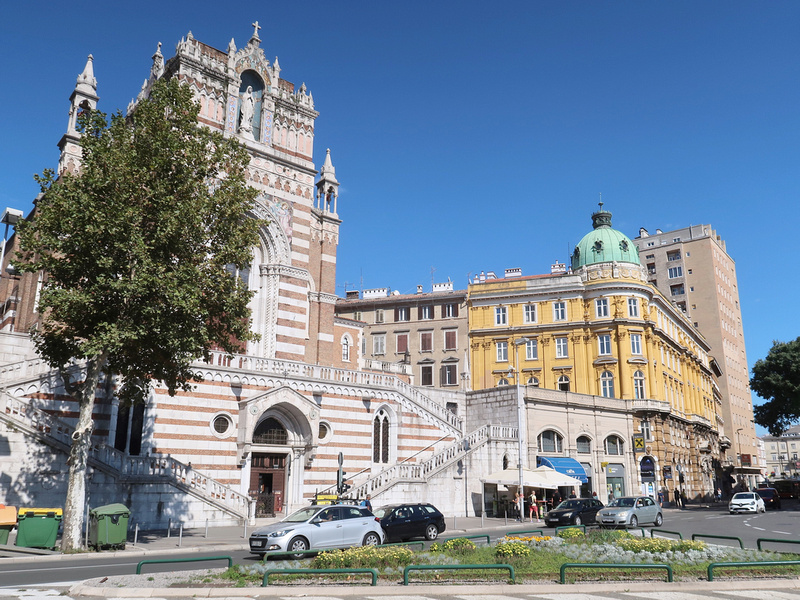 [Church of Our Lady of Lourdes.] 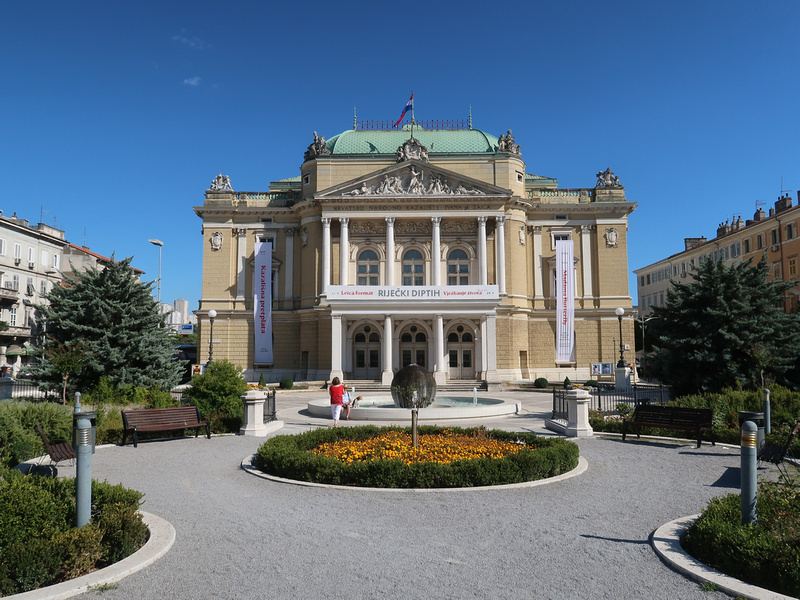 In addition to the grand buildings, I found the geography of the city to be just as interesting. The city clings to the coast with barely any flat space to work with. 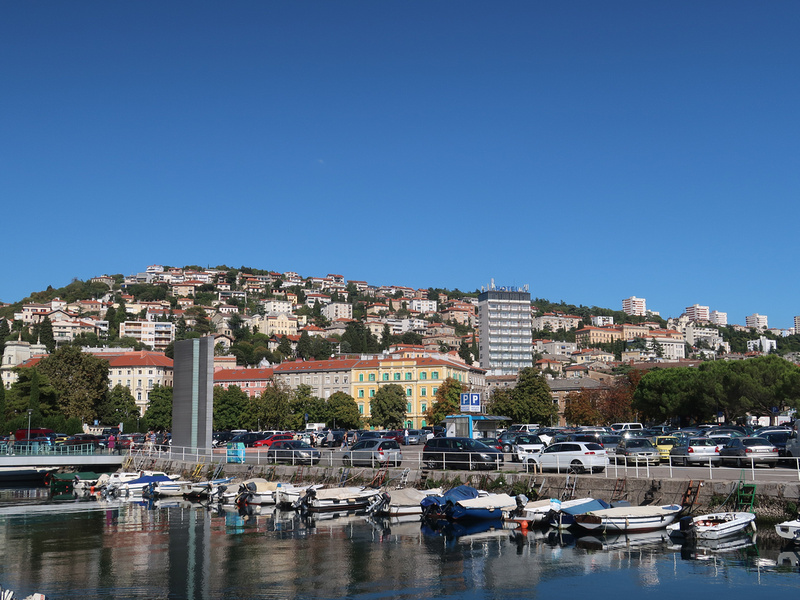 The pain of getting to these apartments are offset by the view once you get home. 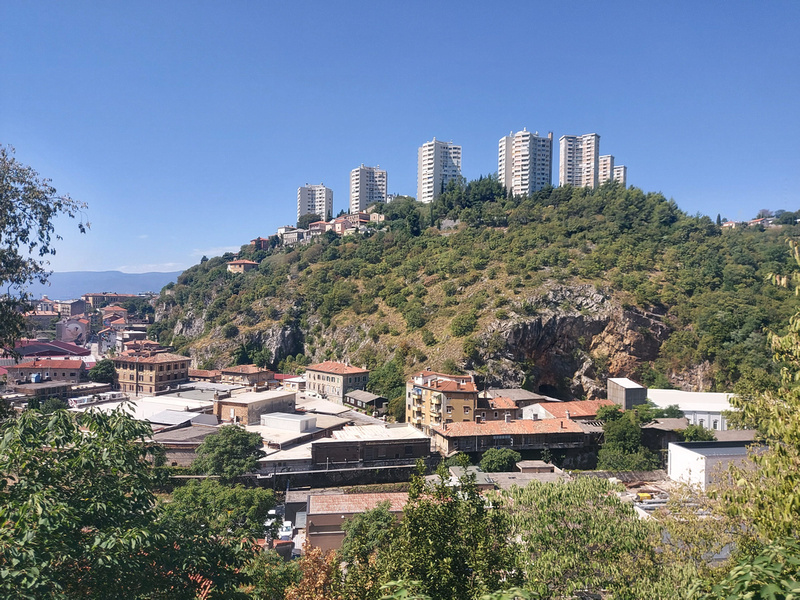 It may seem like an improbable place to build a city until you look at the map. The port is the closest sea haven for access into Central Europe, and it was the port for the Kingdom of Hungary. The train line from Rijeka to Zagreb was built to serve Budapest and the Austro-Hungarian Empire. There are grain silos at the train station, and on the map, it shows the name Budapest Port. 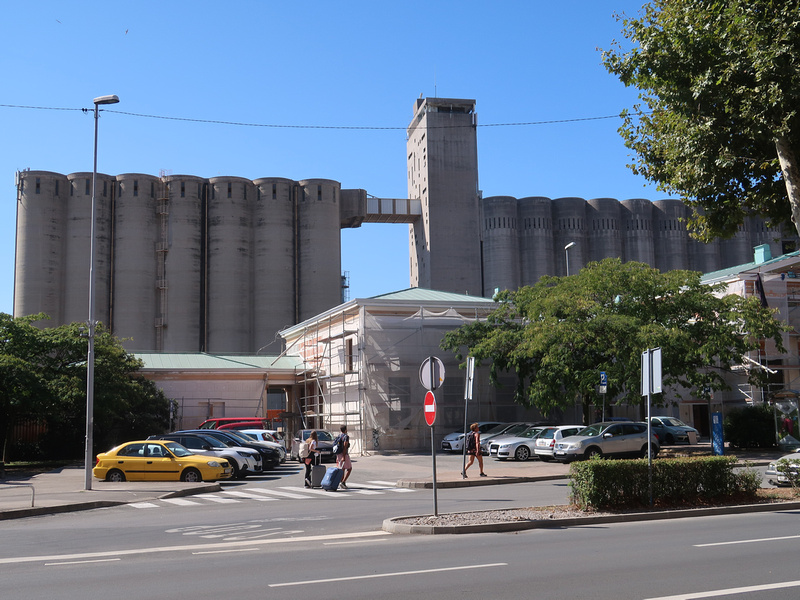 The port is still an important gateway for Central Europe. On the train ride from Zagreb we were held up while waiting for freight trains to pass in the other direction. 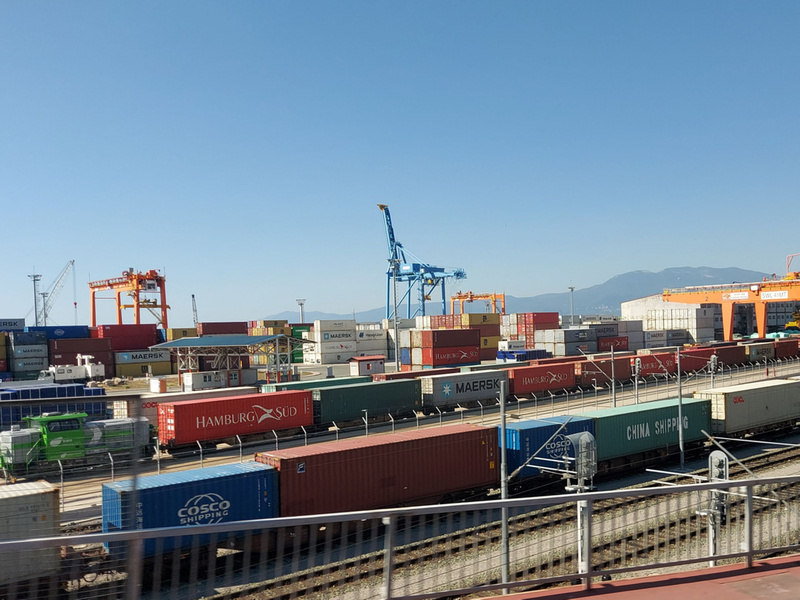 I was walking around so impressed with the grandeur of it all that I wondered if Rijeka had ever been a European Capital of Culture. These grand secondary cities are the sort of cities that get nominated. Not long after I had this thought, almost as if the city wanted to answer my question, I passed a banner that proclaimed it was the European Capital of Culture in 2020. How unfortunate for the city to have this title, in the year of rolling lockdowns during the greatest pandemic in a century. 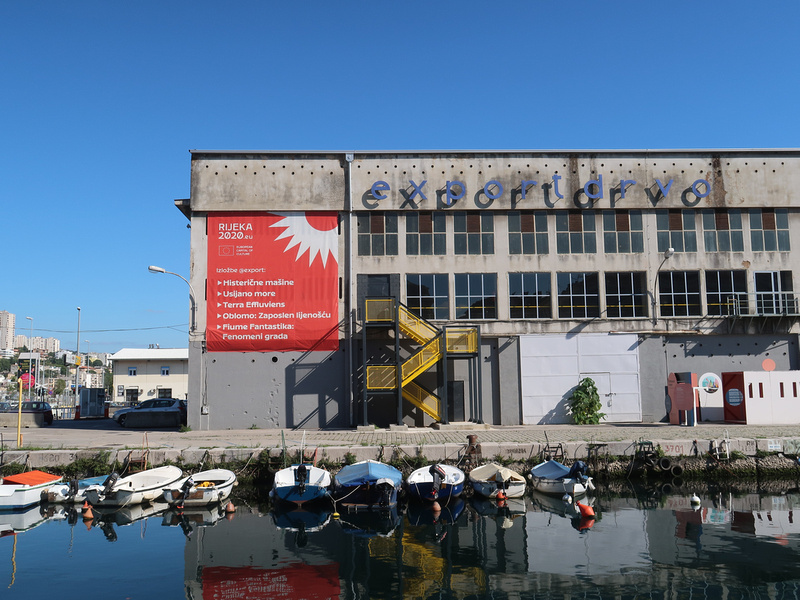 To get an overview of the city I walked up to Trsat Castle. 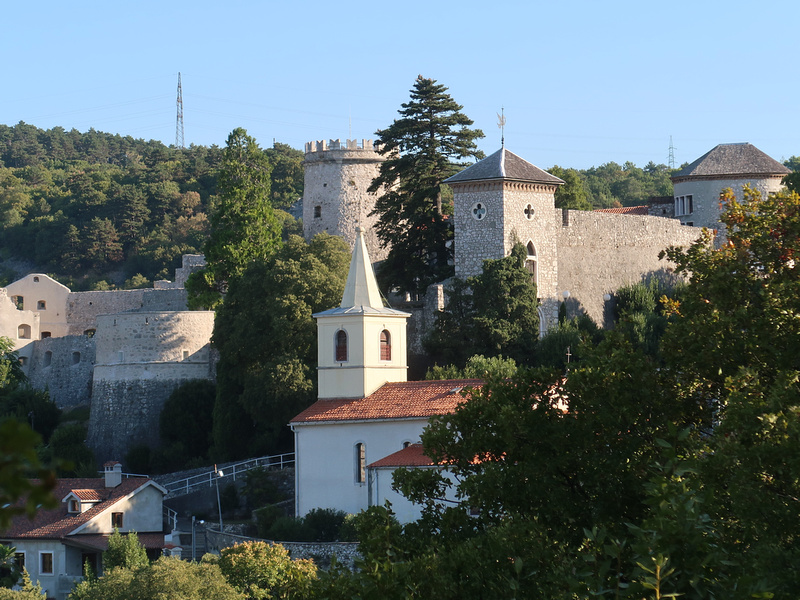 There is a stairway that goes from the old town area to the top of the hill. The walk upstairs felt like good punishment for all the pastries I had been eating (damn you Croatia with all your delicious bakeries!) 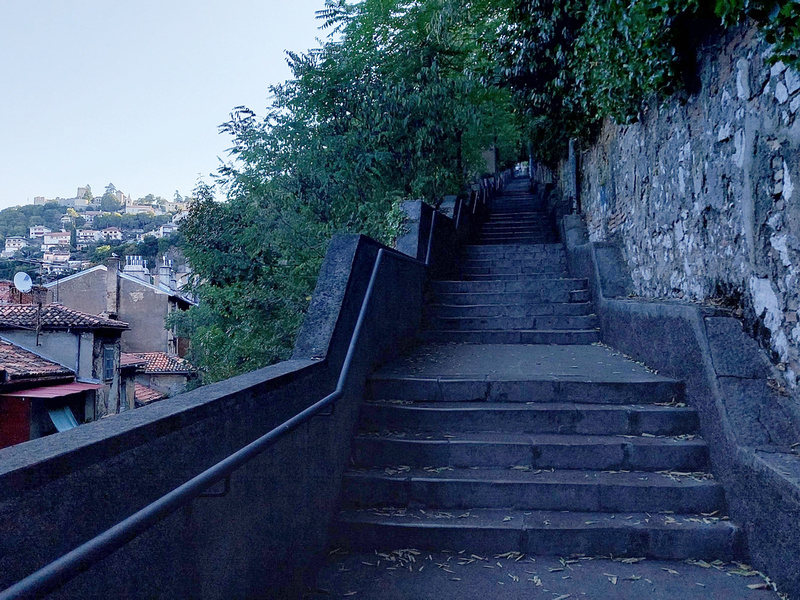 I went in the morning so the sun is behind the castle when looking out over the city and harbour. The walk up the hill was worth it. 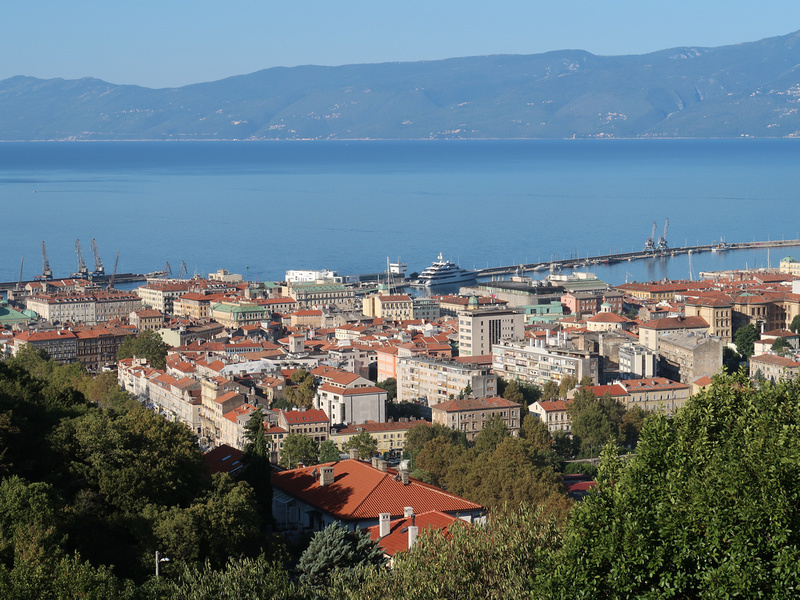 While at the castle I could see an old industrial area that looked intriguing, so I made a note to walk there on the way back. 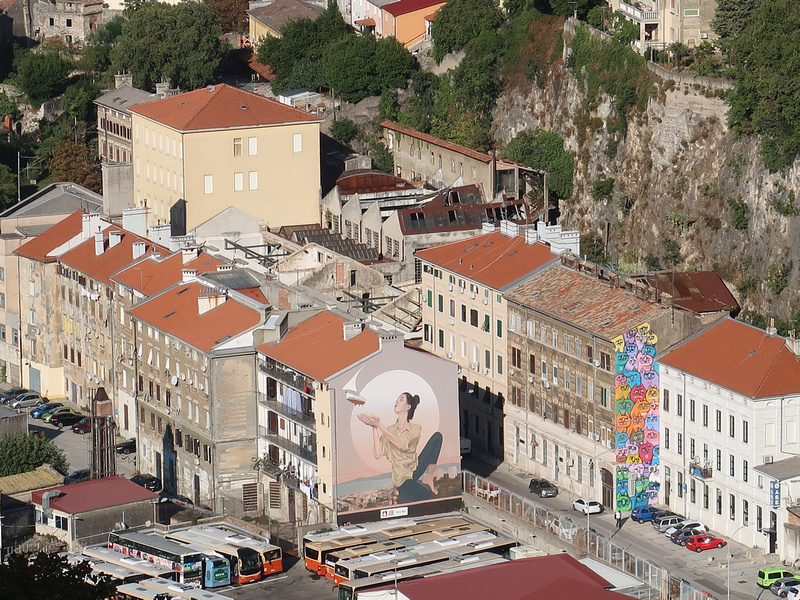 Vodovodna Ulica is in a little valley and there is regeneration happening among the abandoned warehouses. There are some great murals on the buildings here. All that it is missing are some cool cafes. In fact, cool cafes are the thing that was missing in Rijeka so far. Perhaps in a few years time, the cool cafe scene will arrive here as it has done in Zagreb and Split. 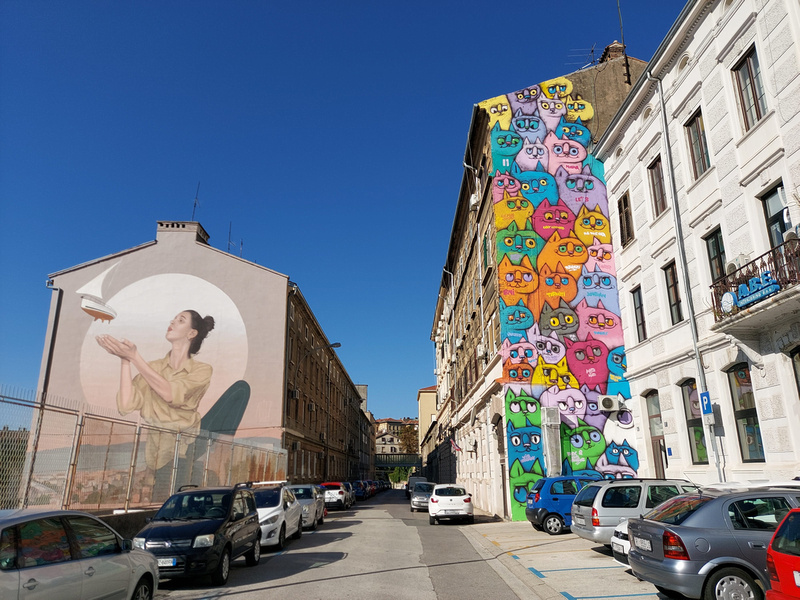 For my coffee fix, I would just pick out one of the many cafes on the long pedestrian street (Korzo). 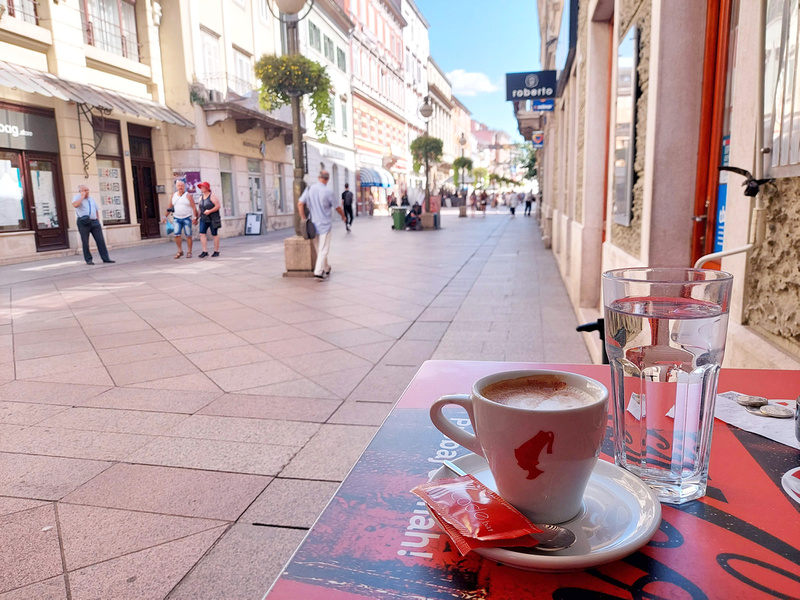 What I like about Rijeka is that it is a working port city. There is not much land to work with, so the living city cohabitates with the working side. There is a train line that goes through the city from the port to the train station. Freight trains go down the road as if it was a tram. 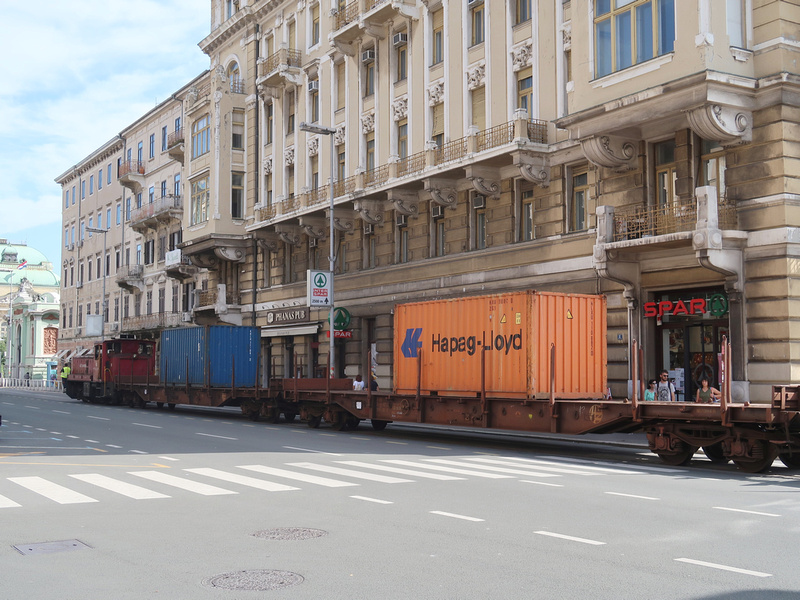 It was good to see that one of the old warehouses in the city was being renovated for future use. 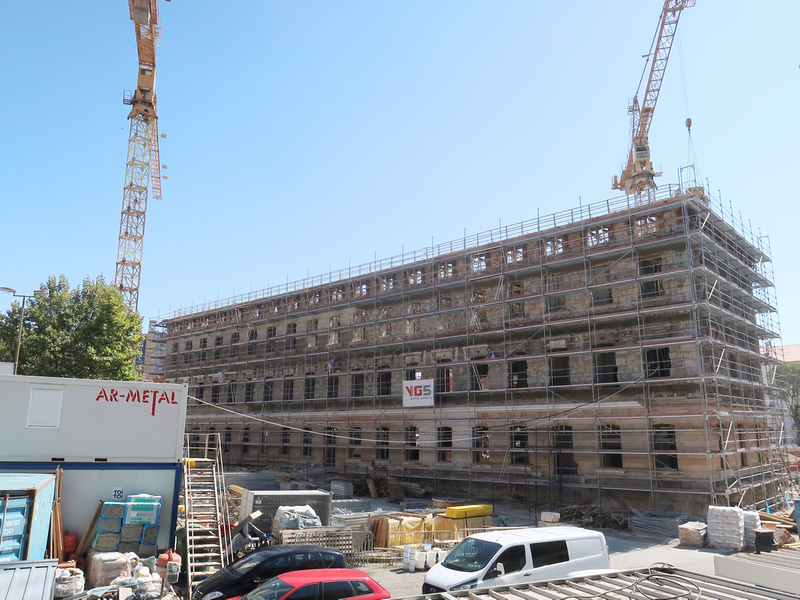 Rijeka is a great place for urban exploration. 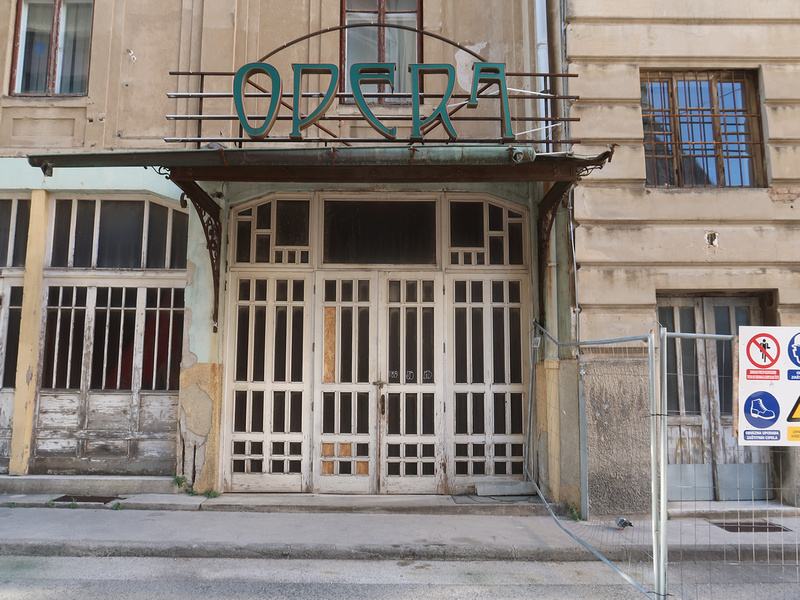 There is tourism here of course, but nothing like what you see on the rest of the coast. In the main port, you will see the megayachts of billionaires that cruise around the Med. If the number of cruise ships disgorging passengers in Dubrovnik and Split gets you down, then Rijeka will provide respite.

Where to stay in Rijeka

Rijeka is a compact city so you can walk everywhere. The main tip is to stay close to the waterfront. If you go too far inland it will be too hilly. 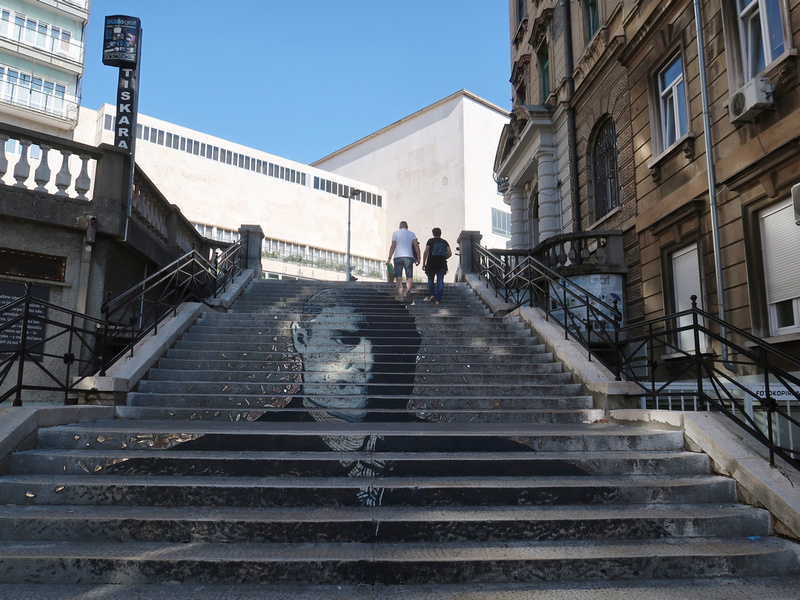 The train from Zagreb is slower than the bus, but it is still better than getting a bus. There aren’t many rail options from here, unfortunately. It used to be possible to get two trains to Pula at the bottom of Istria, but that now involves a bus. You are better off just getting a bus to Pula.

The only other coastal train is from Zagreb to Split, so you need to backtrack to get the train to Split.

There is a direct train from Rijeka to Ljubljana, and the night train to Ljubljana goes to Munich.

Rijeka also has an airport (Rijeka Airport), which is actually on nearby Krk Island. There is a bridge from the mainland to Krk Island so it is not hard to get to.

Rijeka is a big bus hub, and I ended up going through here two more times. After getting a bus to Pula and back and Krk and back, I got the bus to Zadar.

If I was more organised I would have got the ferry to more places. The ferries don’t run every day so some forward planning is needed to make this work smoothly. 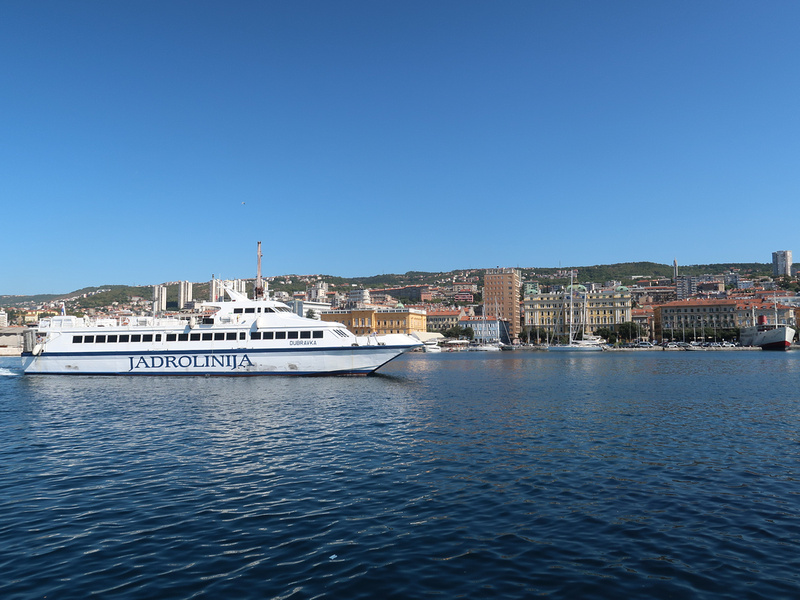 After Rijeka I got the bus to Pula.