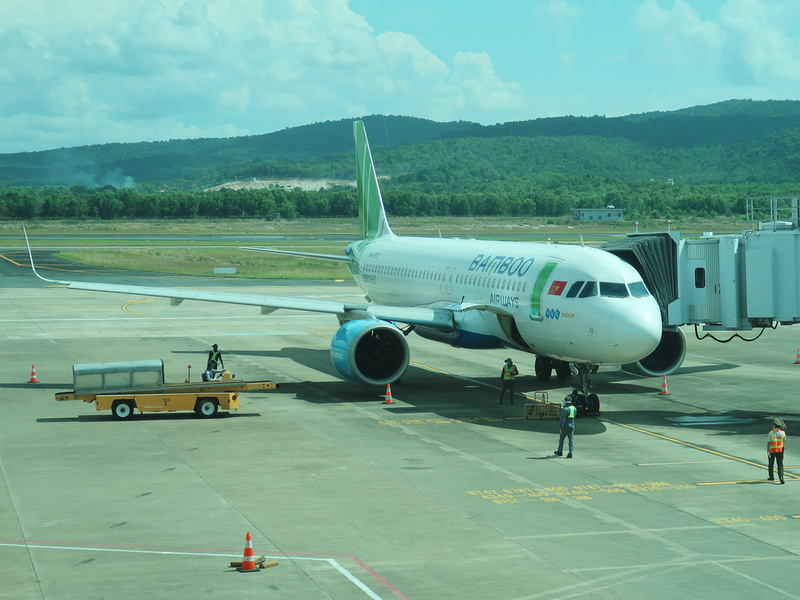 I flew with Bamboo Airways from Phu Quoc to Ho Chi Minh City. There are many flights to choose from on this route, so I ranked the flights on Skyscanner by price. I picked Bamboo Airways for the combination of price and time of day (mid-morning is ideal for me). I also picked it out of pure variety in flight experience. I have flown this route before with Vietnam Airlines and VietJet Air, so I wanted to try another airline.

The ticket for this flight had a base price of $9 USD, then once you select it the total price of $33.07 USD is shown. 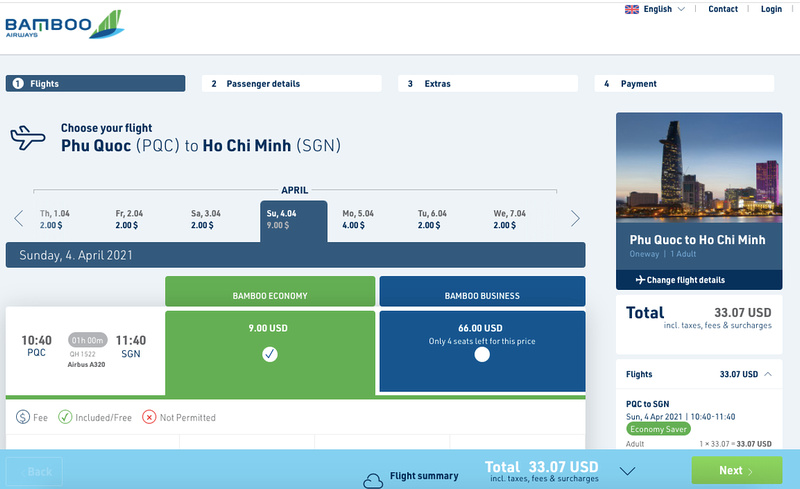 The fare included a checked bag, and there are other add-ons you can select during the booking process. 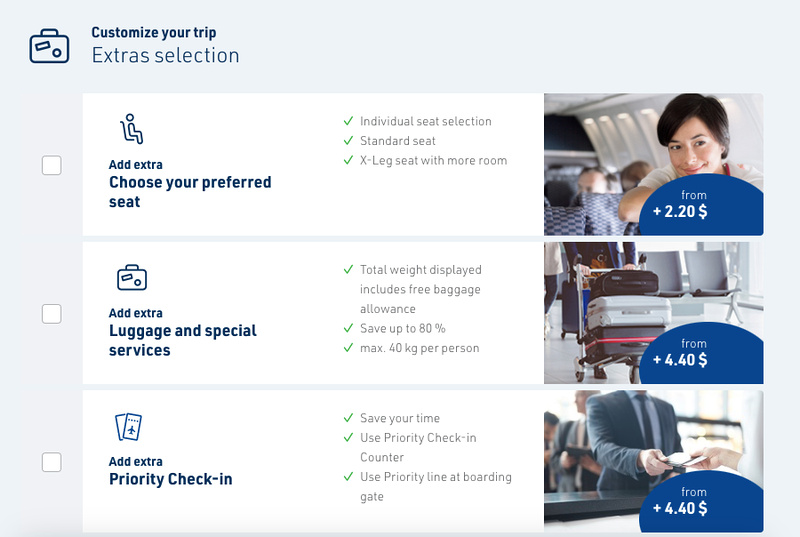 I arrived at Phu Quoc International Airport and noticed that they have recently enacted a quiet airport policy, so no more loudspeaker announcements about flights. Yes! 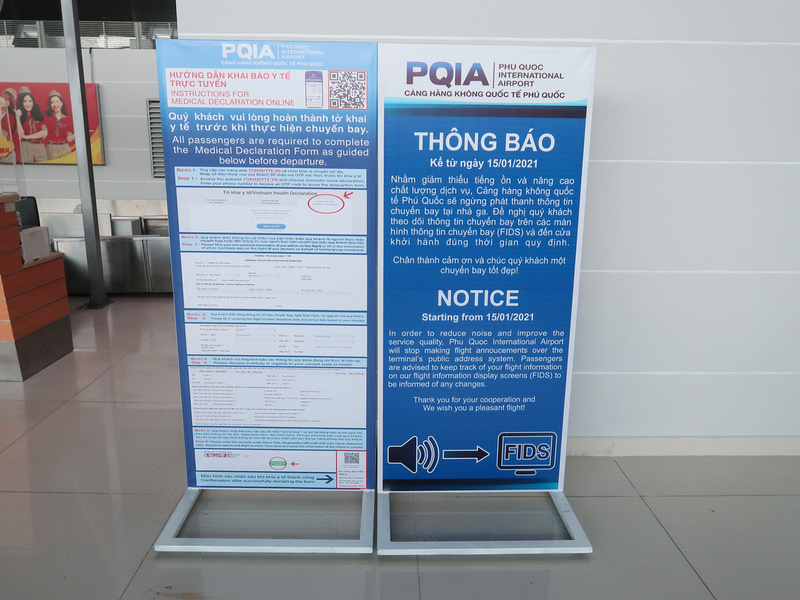 There were a few Bamboo Airways flights operating around the same time, and each flight had its own check-in counter. 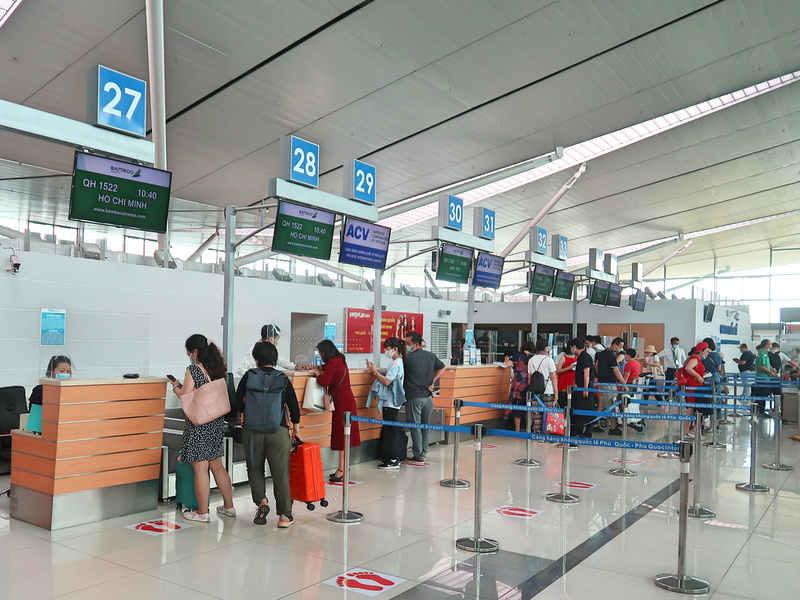 Bamboo also flies from Phu Quoc to Can Tho. It must be one of the shortest domestic routes in Vietnam, but it would be a great time saver when considering the roads of the Mekong Delta and the ferry ride to the island. 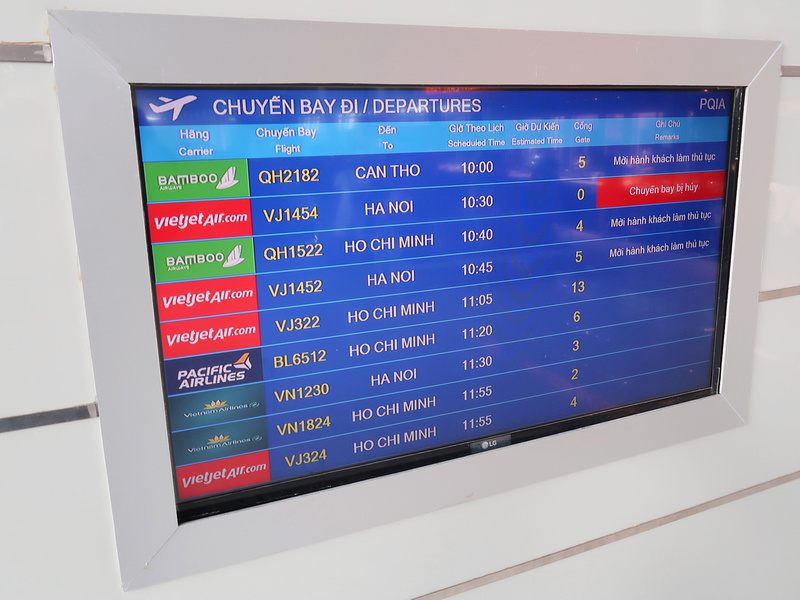 There is a reasonable selection of food options on the airside of the domestic terminal. 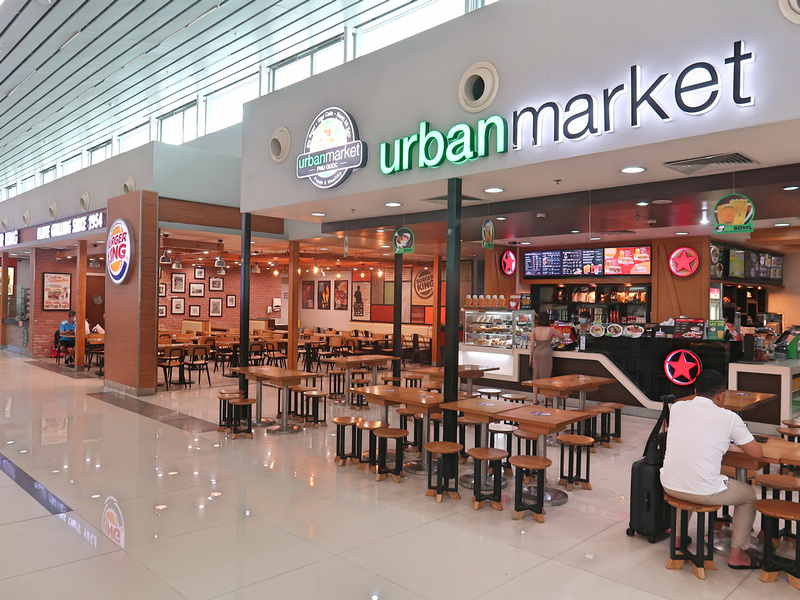 Bamboo Airways was launched in Vietnam in 2019, and I first flew with them on the busy Hanoi-Ho Chi Minh City route. They started out as a hydrid airline, mixing elements of low-cost airlines with full-service airlines. They are planning to expand internationally (which has been delayed due to the pandemic) and now they are looking to get a 5-star rating for their international flights. 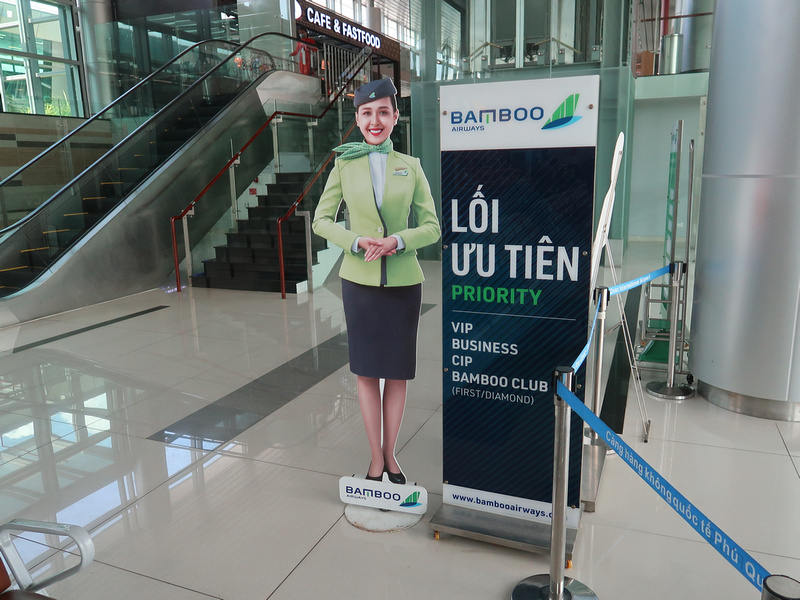 Bamboo Airways flight QH 1522 departs Phu Quoc at 10:40 and arrives at Ho Chi Minh City at 11:40, for a scheduled flying time of 1 hour. The actual flying time is about 45 minutes. 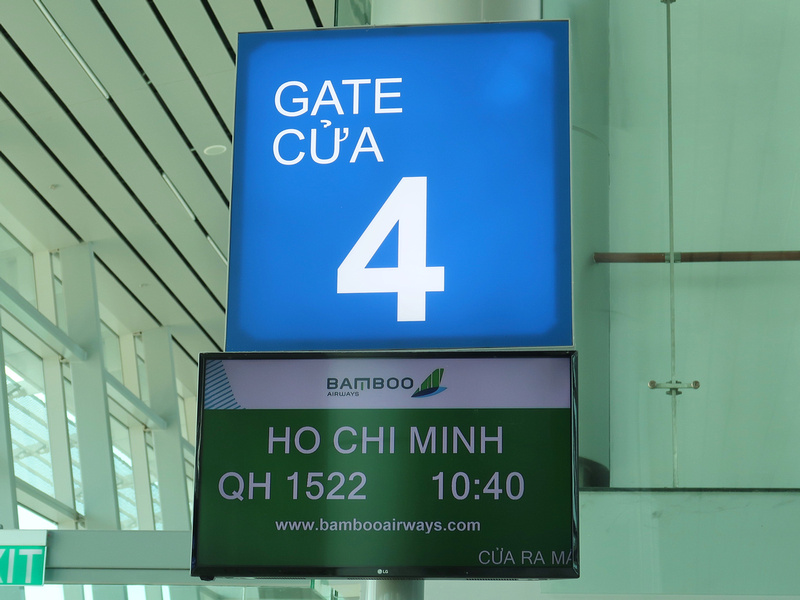 I took this flight when there were no local cases of the coronavirus reported in Vietnam. Domestic travel was operating as normal, but we are required to wear masks in the airport and on the flight. 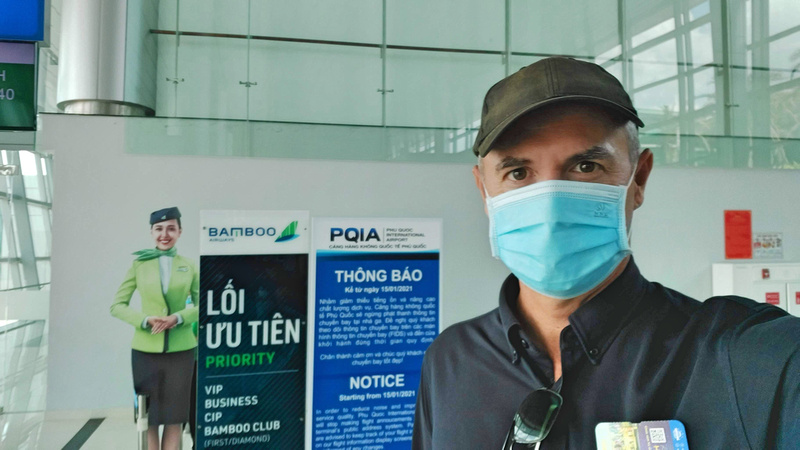 Out aircraft was parked at the gate on time, so I was going to be back in Saigon for lunch.

On this flight our seats had no back packets. This is more a feature of a low-cost airline, and something that annoys me. 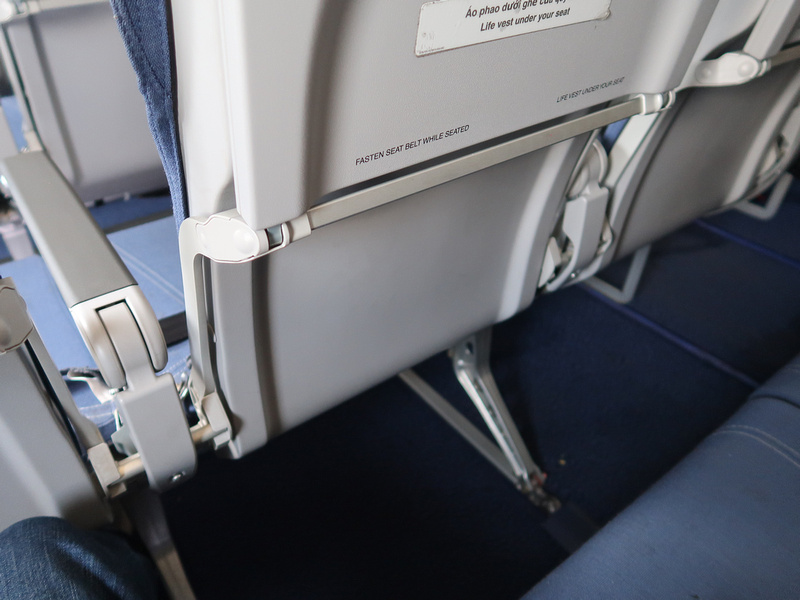 There is a magazine rack in the back of the headrest instead. 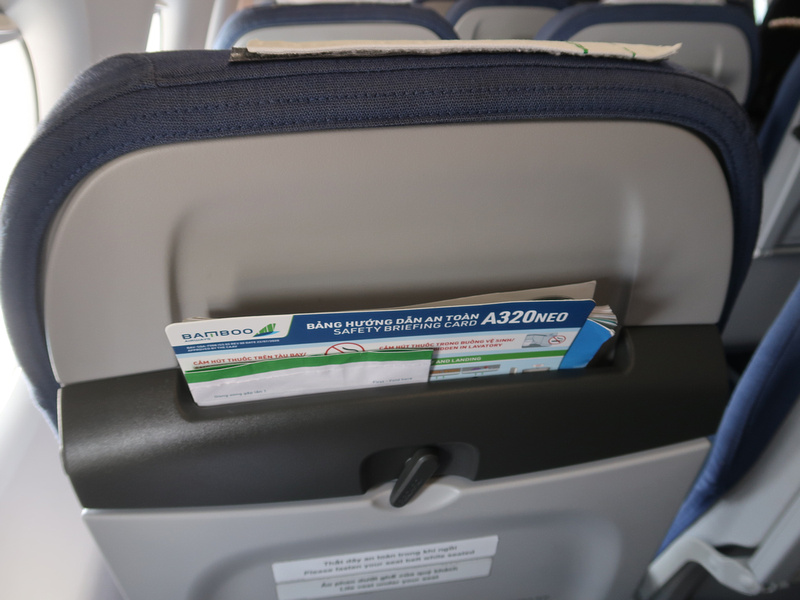 I got a window seat for this flight, which is my preference for short flights. I had spent most of my time in Phu Quoc looking at hotel construction sites, so it was nice to see the interior of Phu Quoc still looking like a jungle. 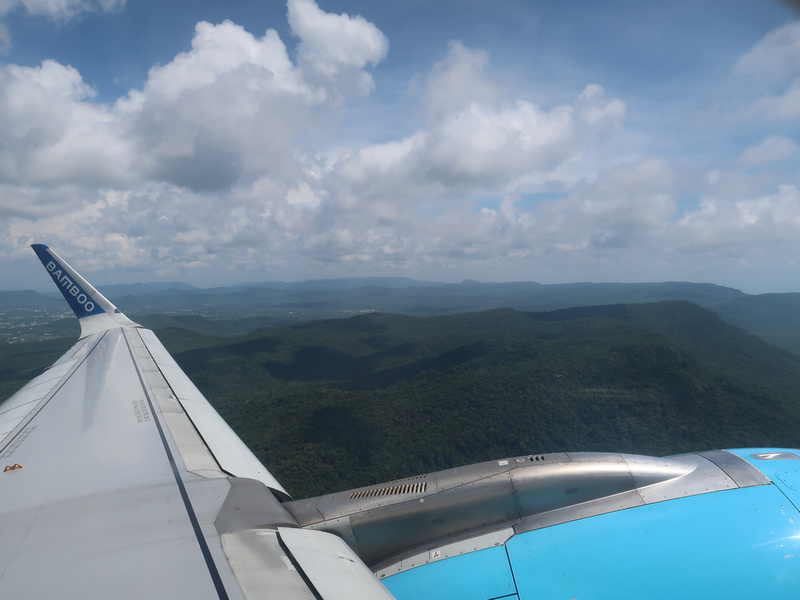 Look Magazine – the inflight magazine of Bamboo Airways. For some reason, they ran with a cover photo of a famous Instagram location in Bali, even though Bamboo has no flight and no plans to fly to Bali. Usually, an airline magazine features a cover photo of a destination they serve. I think that once the travel world gets back to normal, Bamboo Airways would consider competing with VietJet Air flights to Bali. 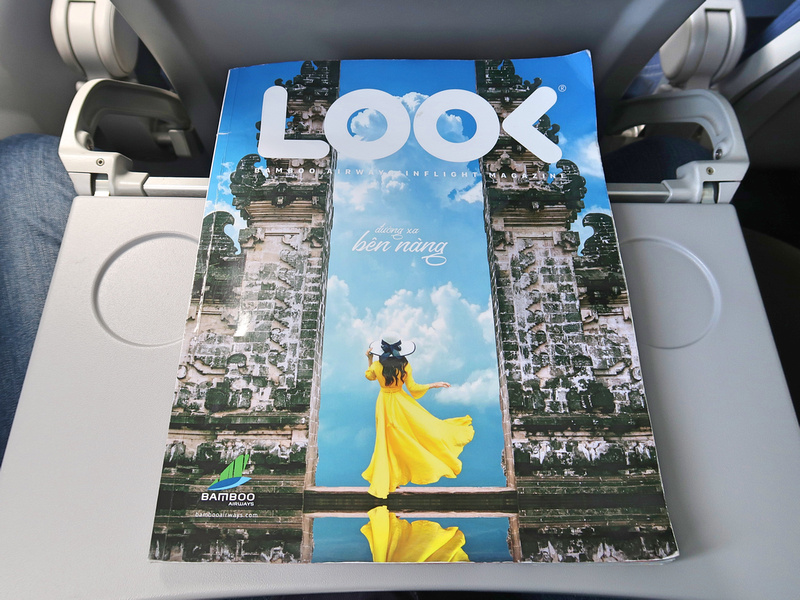 I always check the inflight magazine for new routes, and while there is no Bali flight, there are now flights from Ho CHi Minh City to Rach Gia. This is in the deep south of the Mekong Delta, and one of the ports for Phu Quoc. It’s also a port for Nam Du Island, so I will probably do this flight another time. 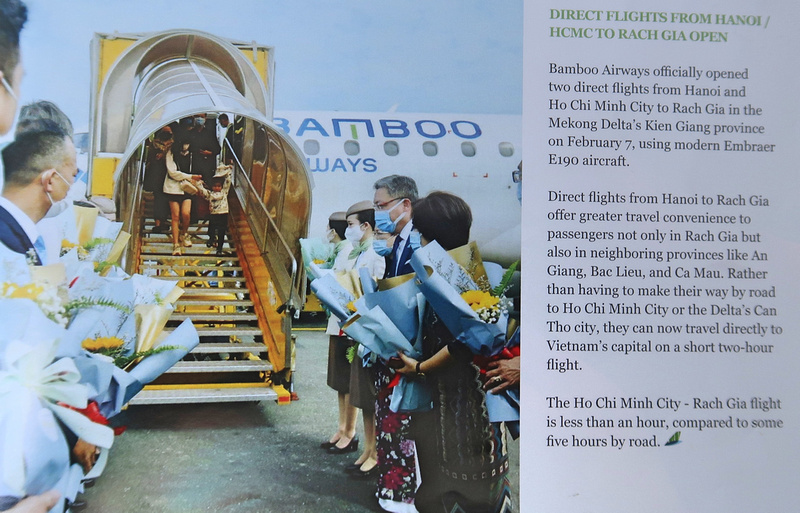 When I first flew Bamboo Airways they didn’t have enough routes to show on a map. Now they have built out an impressive domestic route. They also have a variety of aircraft types, big enough to fly long haul in the future, and small enough to fly to small domestic airports (like Rach Gia). 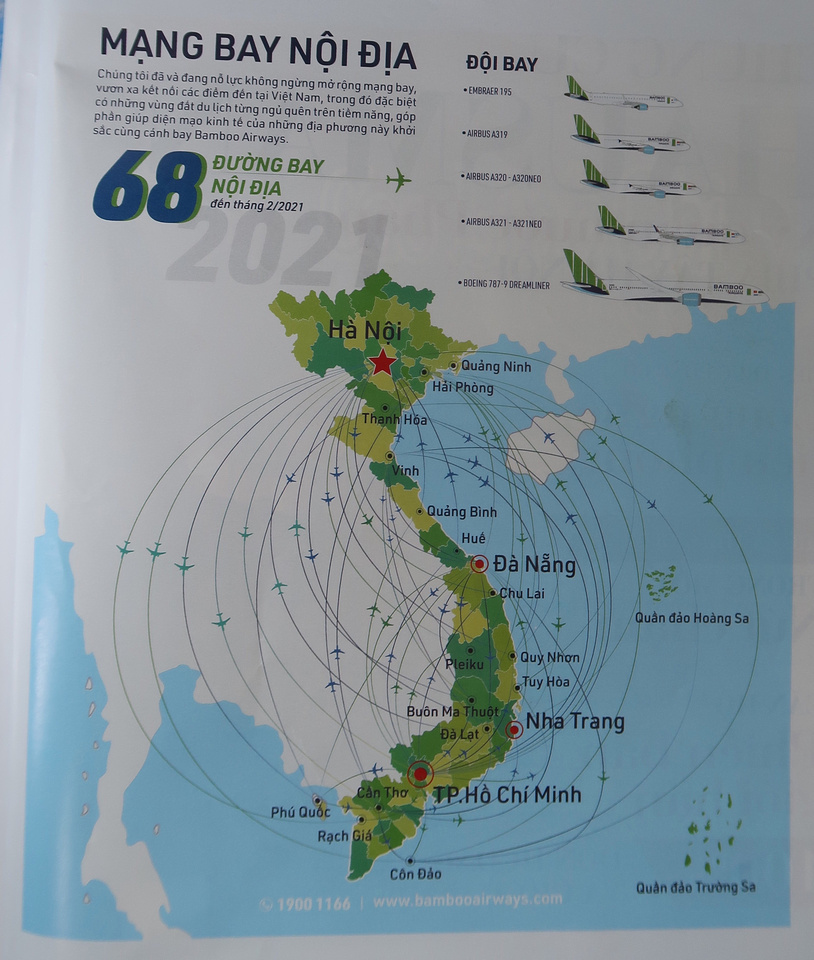 I also look at the route map to get ideas for future trips as I work my way around every province in Vietnam. 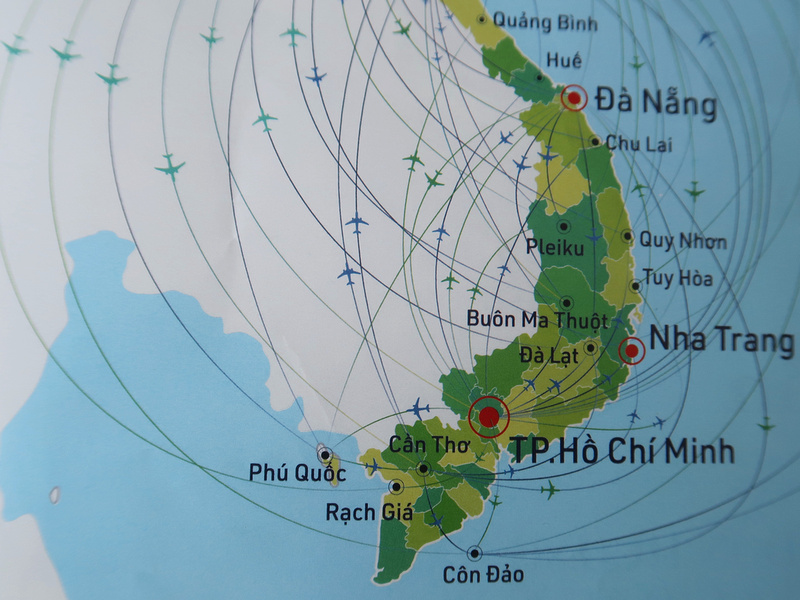 There is no meal or snack service, which is fair enough considering how short the flight is. Were we given a free bottle of water and a wet wipe. 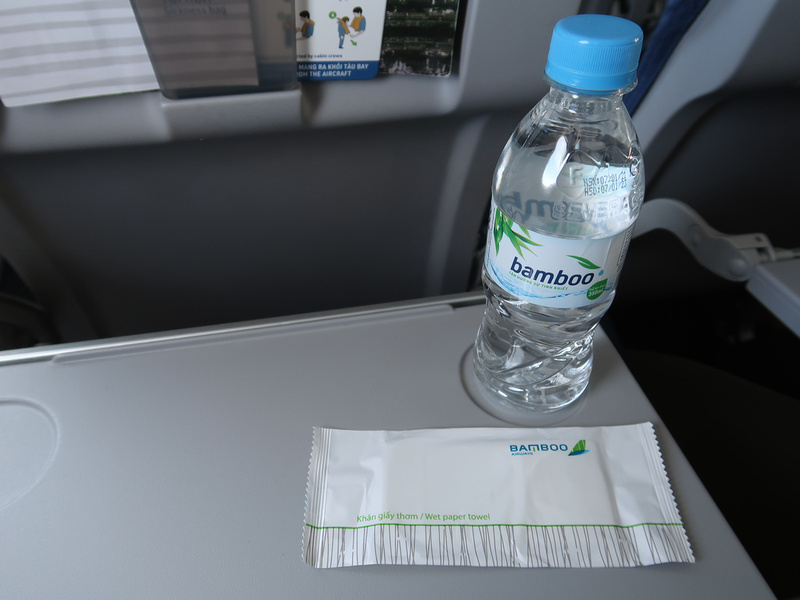 The flight would be shorter if planes landed from the west at Tan Son Nhat Airport. Most of the time though, planes land from the east, so the flight has to do a large loop around the city to get into the landing path. Here we are flying over Can Gio District in the southeast of the city, characterised by the swampy waterways. 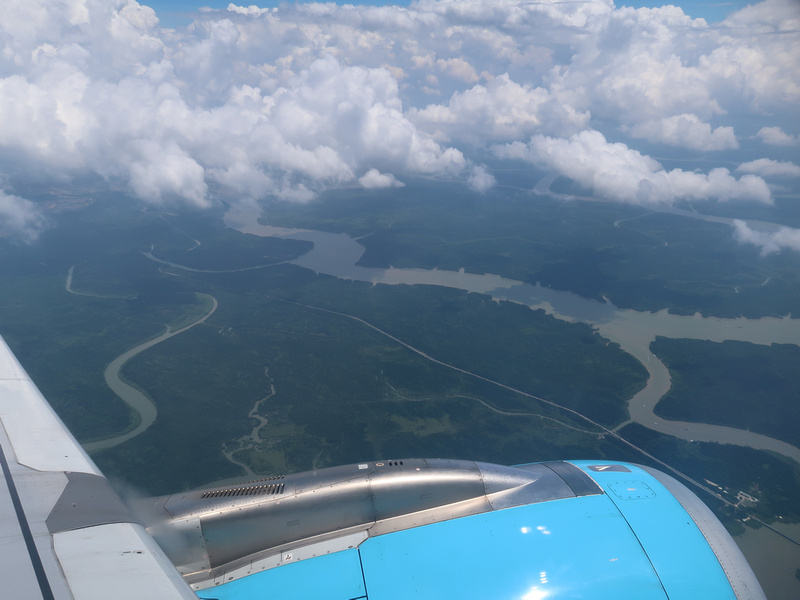 As flights to Tan Son Nhat land from the east (most of the time), getting an A-seat window will give you the best view of the city when you land. 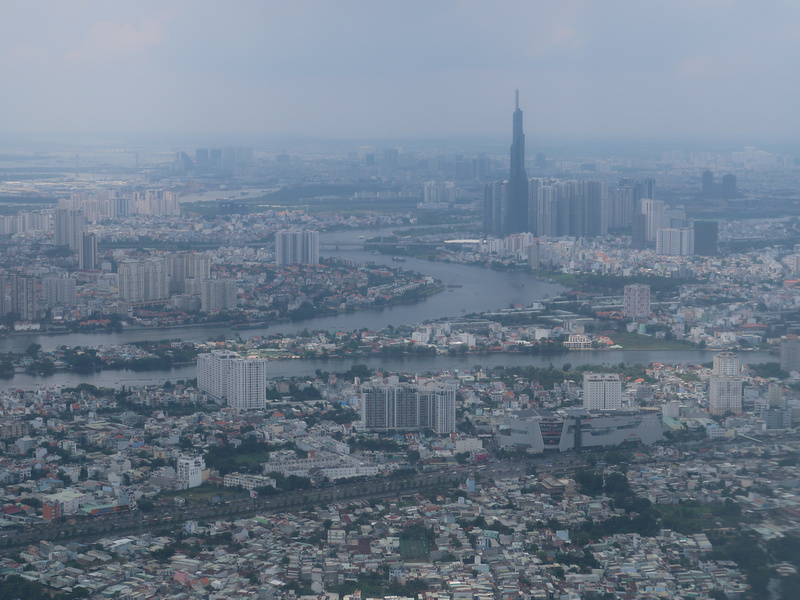 We arrived on time, and were parked on the tarmac far away from the terminal. 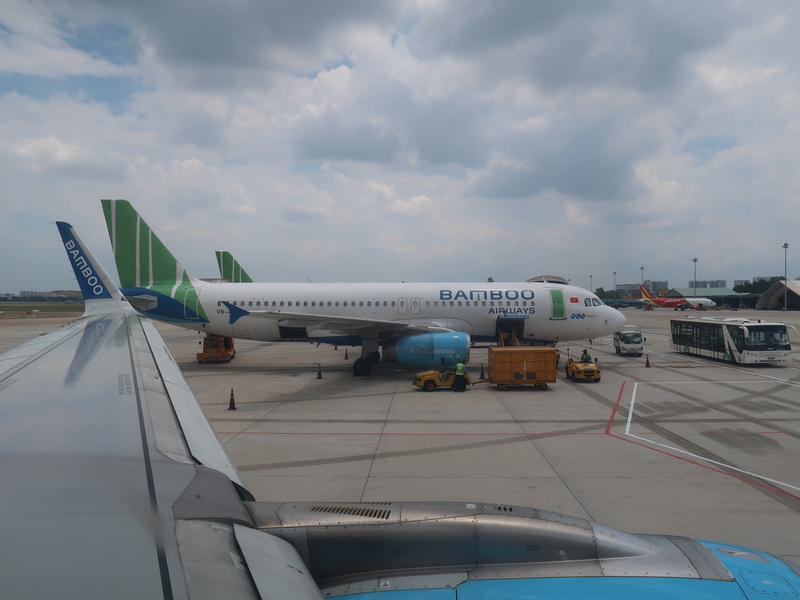 Tan Son Nhat long ago ran out of capacity, so they are building a new terminal here, and there is also a second airport planned for Ho Chi Minh City. 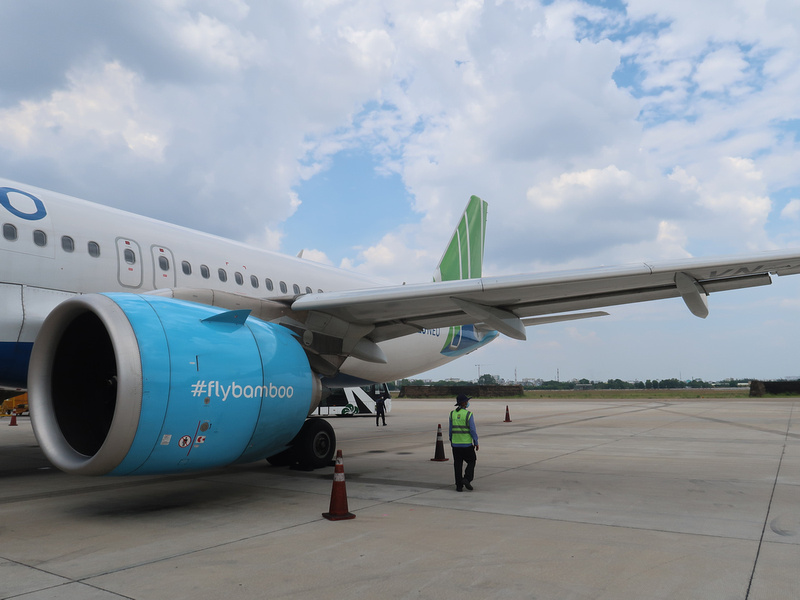 Until then it will be common to disembark on the tarmac and be bussed to the terminal. 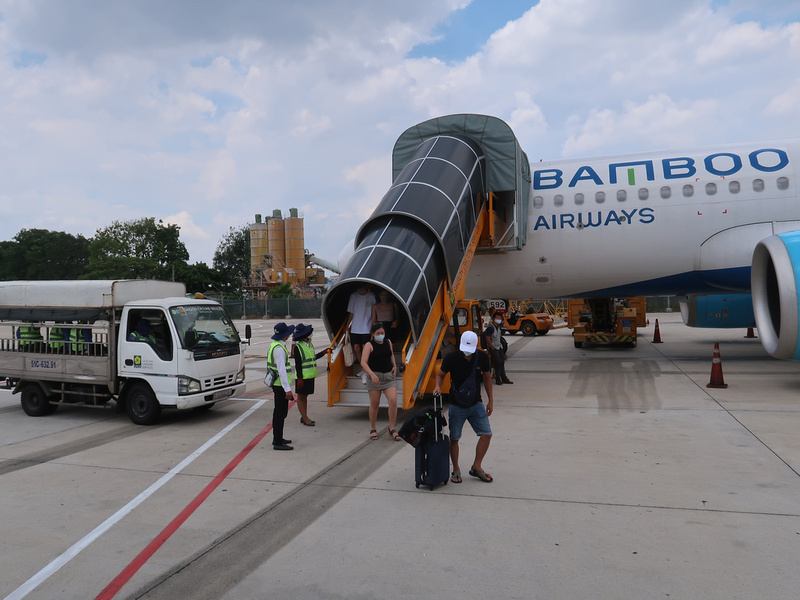 Despite the airport being stretched to the limit, it is a surprisingly efficient airport, with baggage claim getting done in a reasonable time. I also love Tan Son Nhat because it is so close to the city centre. 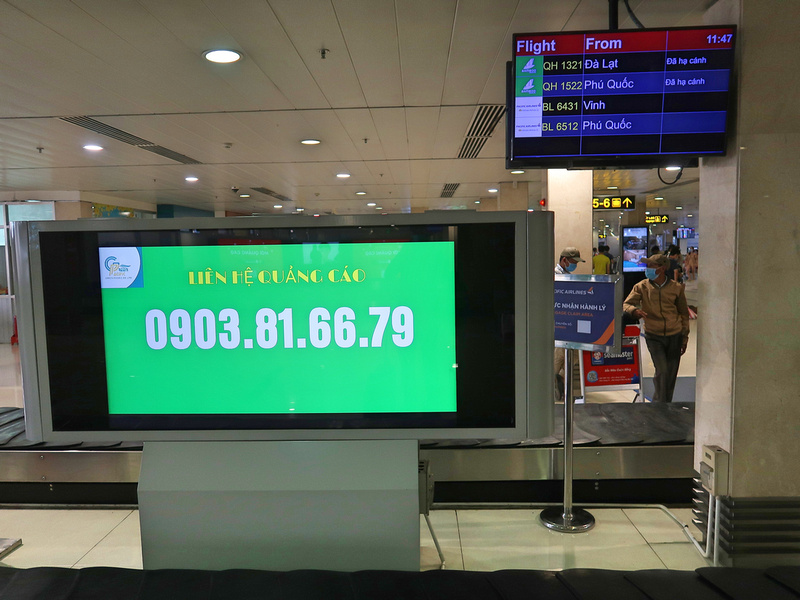 Overall this was a good flight from Phu Quoc to Ho Chi Minh City.