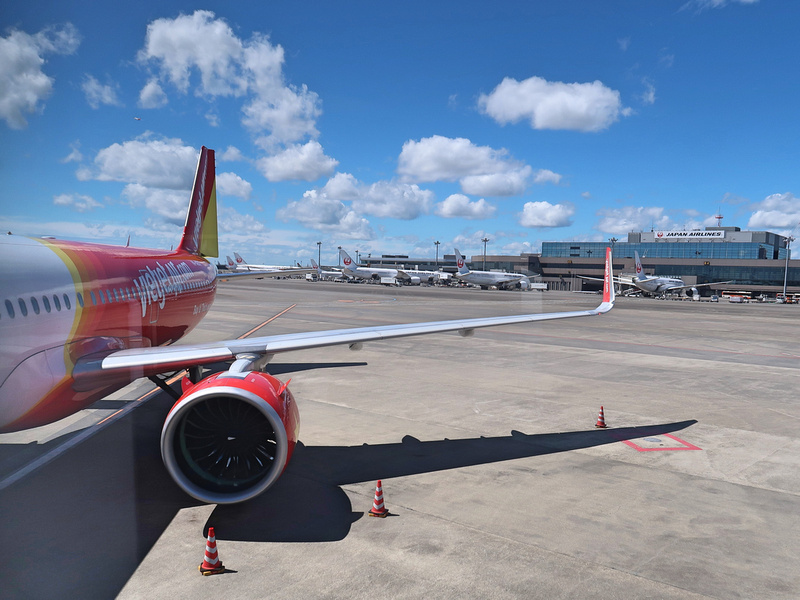 I flew with VietJet Air from Tokyo to Ho Chi Minh City. This is my review of the flight, and what to expect.

Being based in Ho Chi Minh City I was happy to read when VietJet Air announced direct flights to Tokyo. Before this service began the route was only served by legacy airlines and I could never find any cheap flights.

Around the time I started planning my Japan trip I saw that VietJet Air were offering sale tickets from 0 VND. Of course the ticket is never zero, and it appears that in Vietnam they don’t even need to add the * disclaimer of “not including taxes”. Ryanair used to use this method of advertising 20 years ago when I was living in London. Now in the UK and Australia the full price has to be advertised.

Knowing that it wasn’t going to be absolute zero (a Kelvin fare?) I figured it would still be cheap, so I waited for the Saturday sale day to check the prices. I was booking about two months in advance and I couldn’t find any availability of 0 VND tickets. I checked the next month and I found one ticket. 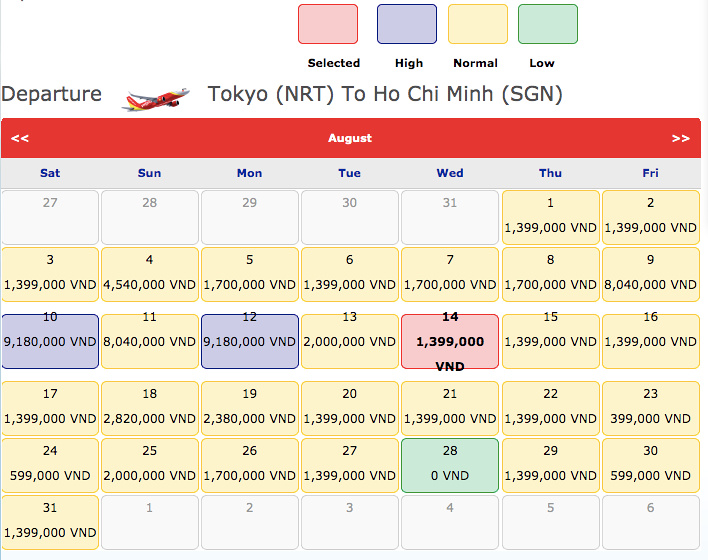 I skipped ahead another 2 months and I found more availability, to the point where I could have got 0 VND tickets on a return flight. If you’re more organised and plan ahead then you could find these cheap seats and save a lot of dong. 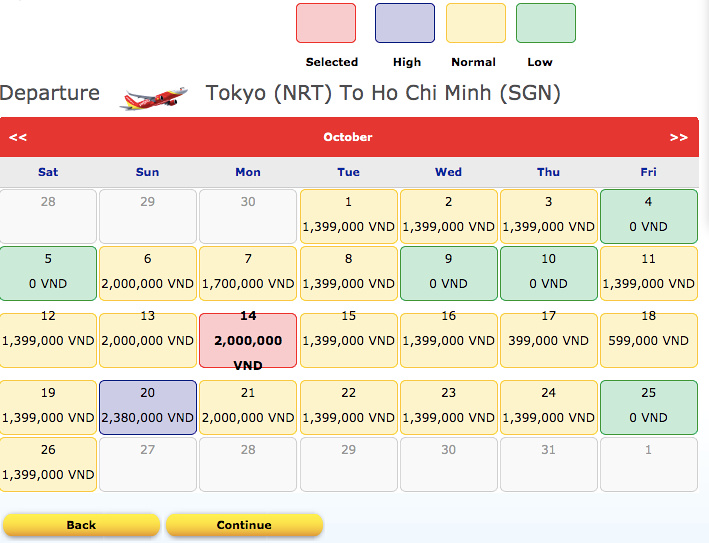 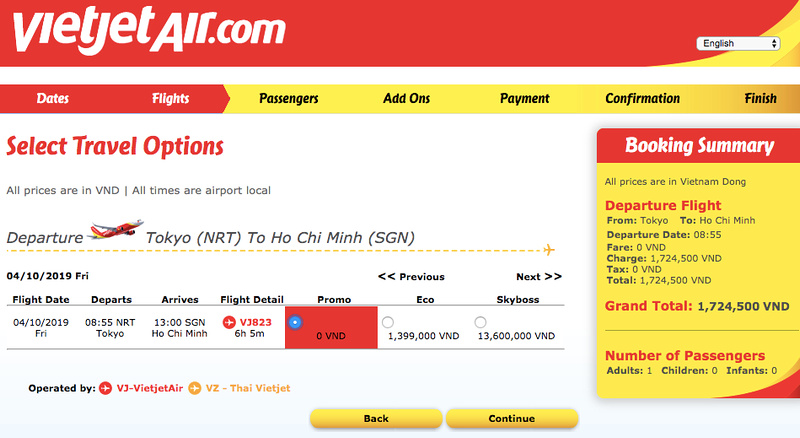 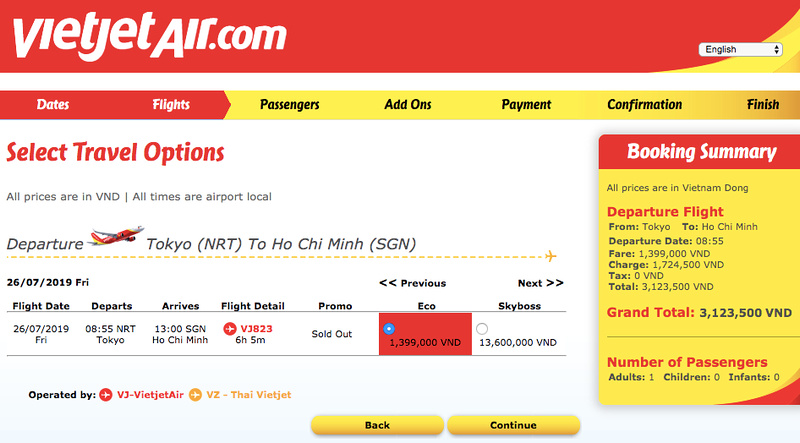 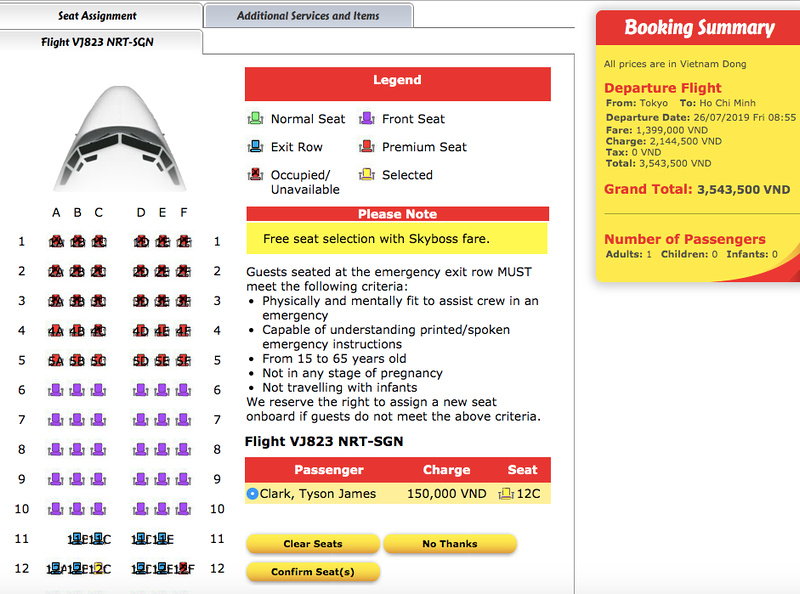 The total price was 3,533,500 VND ($151.76 USD). If I had of got the 0 VND ticket it would have worked out at around $90 USD. In the end I was happy with my price, especially when the cheapest ticket from other airlines started at $420 USD. I would just prefer if VietJet Air advertised the minimum you have to pay. If they advertised “Tickets to Tokyo from $75 USD!” it would still sound like a great deal. 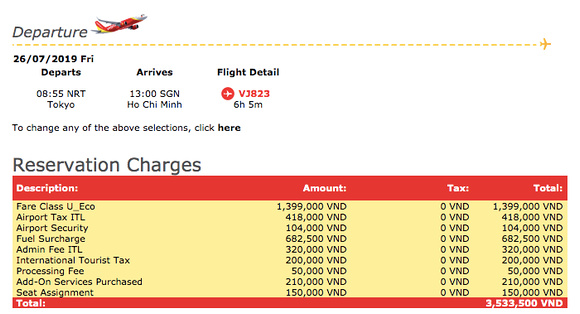 Another thing about low cost airlines flying from Southeast Asia to East Asia is that they often fly overnight. The SGN-NRT leg departs SGN at 00:05, arriving in NRT at 08:00. I won’t do overnight flights like this unless I have no choice. I did the overnight VietJet Air flight from Hanoi to Seoul, and I was wrecked for the next day. The NRT-SGN leg is at a decent hour, departing Narita at 9:00. I had arrived in Japan via Kaohsiung and Osaka, so I didn’t do the SGN-NRT flight.

Narita is far from the city centre, but I was staying near Ueno Station which has the direct Skyliner train to Narita. That saved me a lot of time and hassle in the morning. The first train departs Ueno at 5.58 and arrives at Narita at 6.40.

Many of my Tokyo friends prefer Haneda as it’s closer to the city. I arrived at Haneda on my last trip and it was convenient to get the airport monorail to the city. I have since met people who prefer Narita, mainly because they have better access to the Skyliner.

There are two VietJet Air flights that depart around the same time (the other being Hanoi). Unlike Taipei where they check in Hanoi and Saigon flight in the same line, there are separate queues for each flight. I try and be there when the desks open as I hate queueing, but the first train of the day didn’t get me there until after check-in opened. There was a long queue but it moved fast enough. 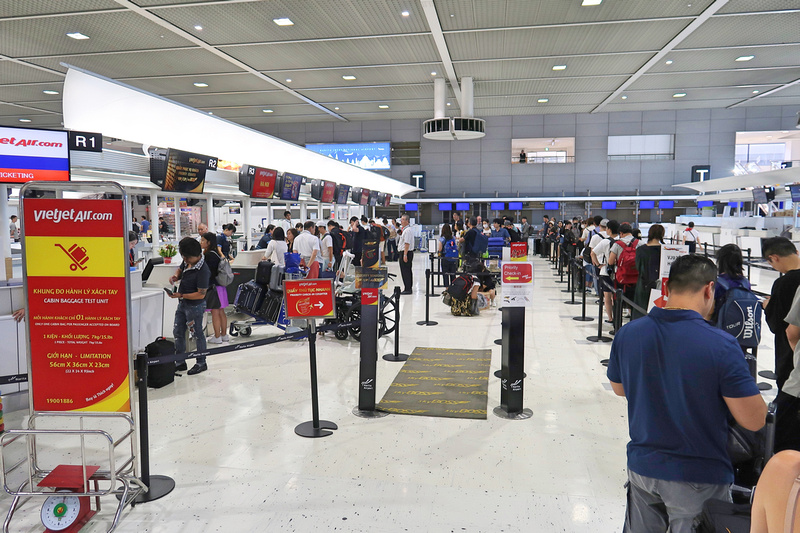 Not that it mattered anyway as my flight was an hour late. Of course the Hanoi flight was running on time. 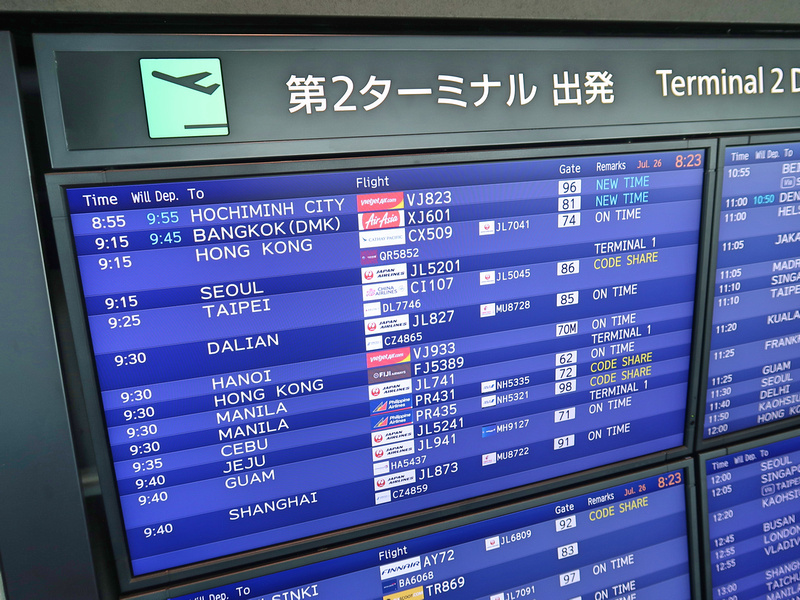 Waiting for my VietJet Air flight to Ho Chi Minh City, with the Hanoi-bound aircraft in the background. 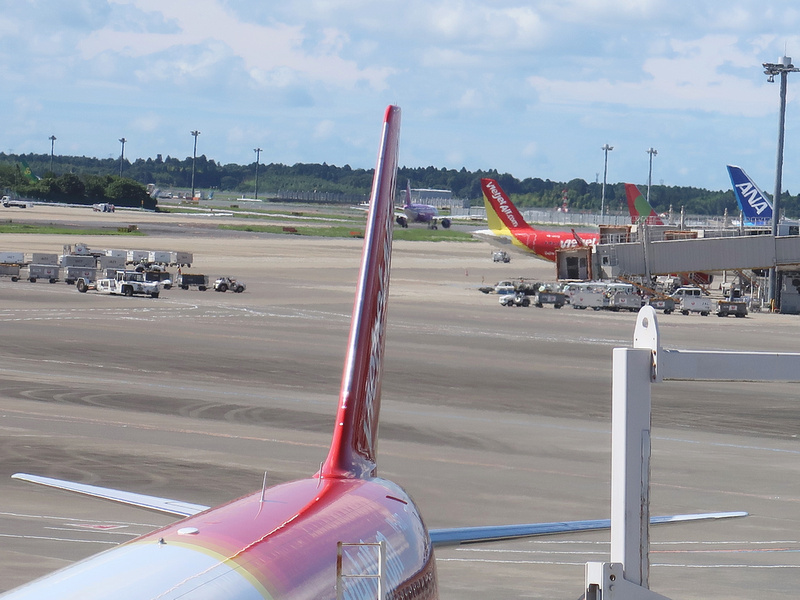 VietJet Air flight VJ823 is scheduled to depart Narita at 8:55 and arrive at Tan Son Nhat at 13:00, for a total flying time of 6h 5m. Actual flying time for this flight was announced as 5h 46m. 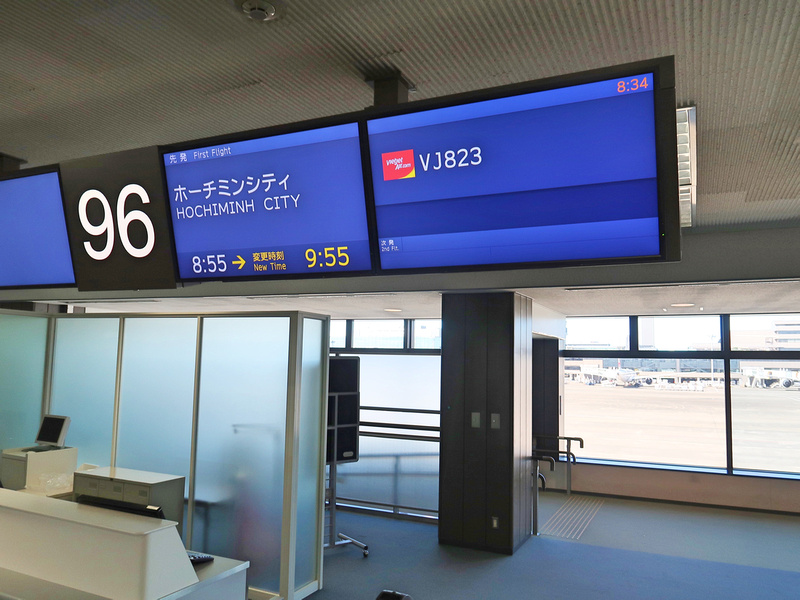 With a scheduled flight time of 6 hours I booked an exit row seat to get some extra leg room. Unfortunately it didn’t occur to me when I made the seat selection that VietJet were showing two rows of exit row seats. There is only one exit row, with the window seat in the second row not having a seat in front of it. 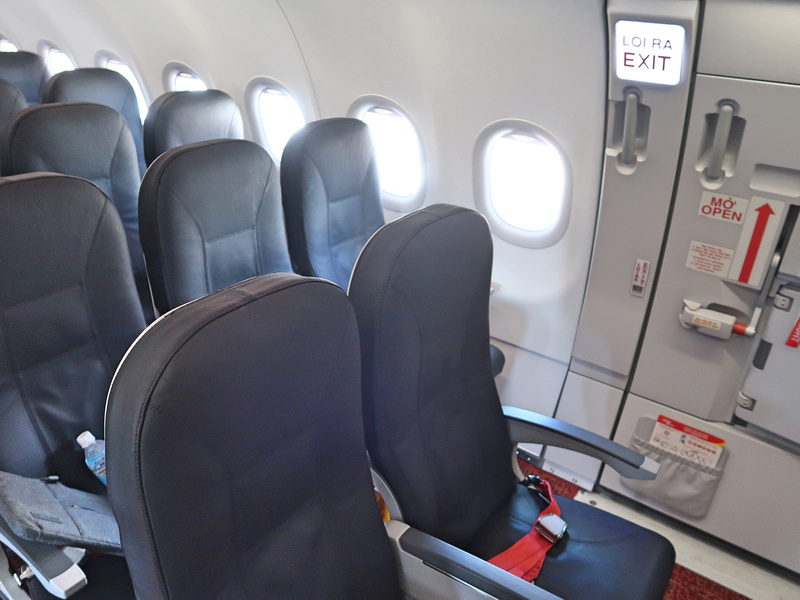 I booked the aisle seat behind the real exit row, and this was definitely not an exit row seat. I ended up getting the same amount of legroom as everyone else. I left a comment with VietJet Air saying that they shouldn’t be selling the two seats behind the exit row as exit row seats (see the seat map above). 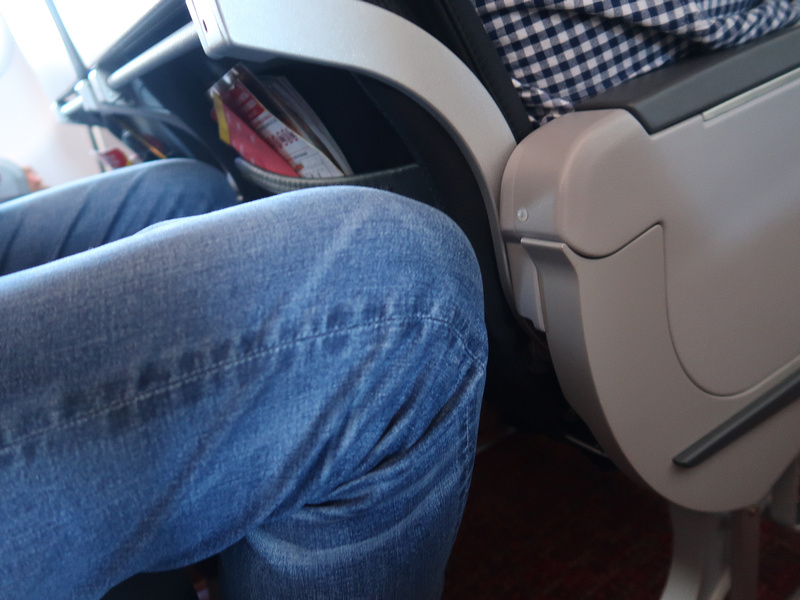 For the record this exit row seat with a window and no seat in front is the best seat in the house. 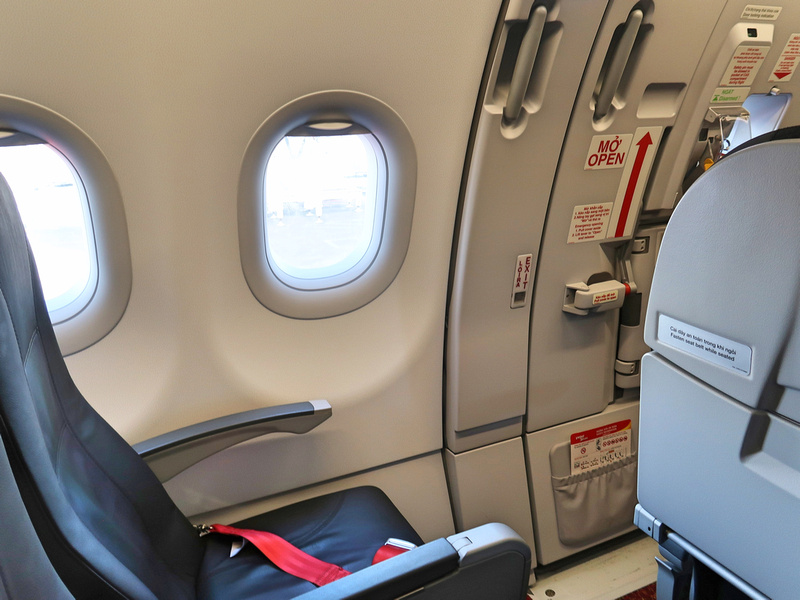 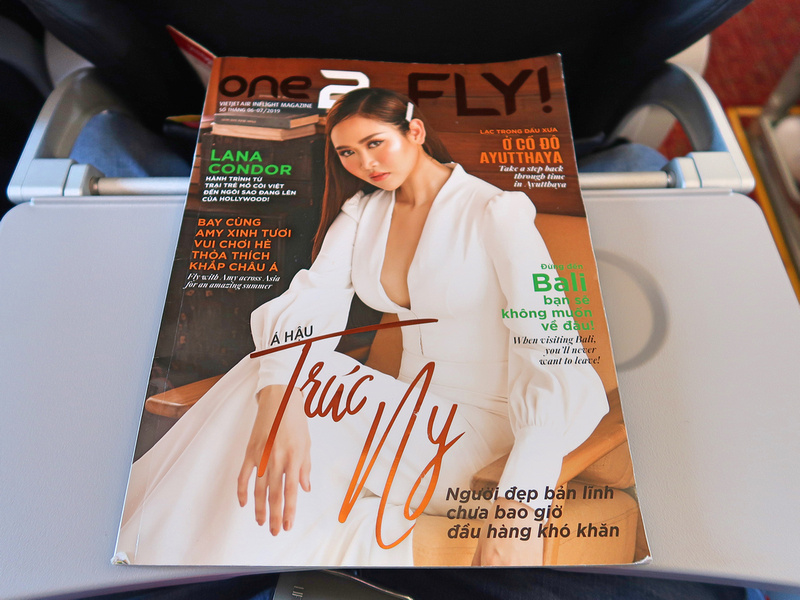 They don’t show a route map in this magazine. Instead they have a visually unappealing list of destinations. 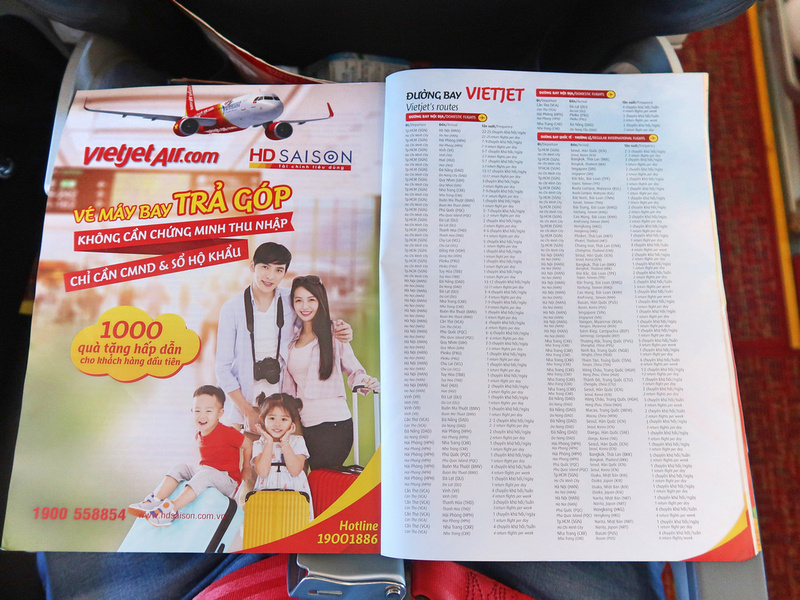 There is no free meal service, so you can either prebook a meal or buy onboard. 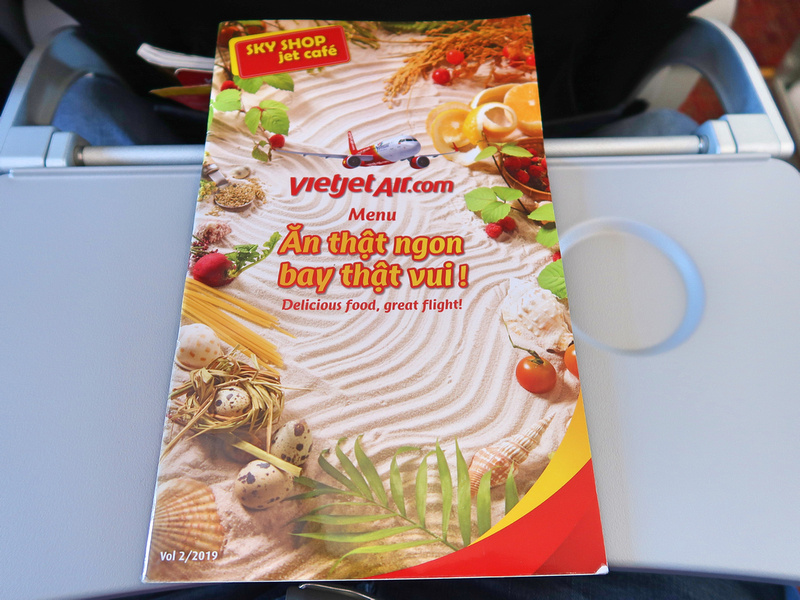 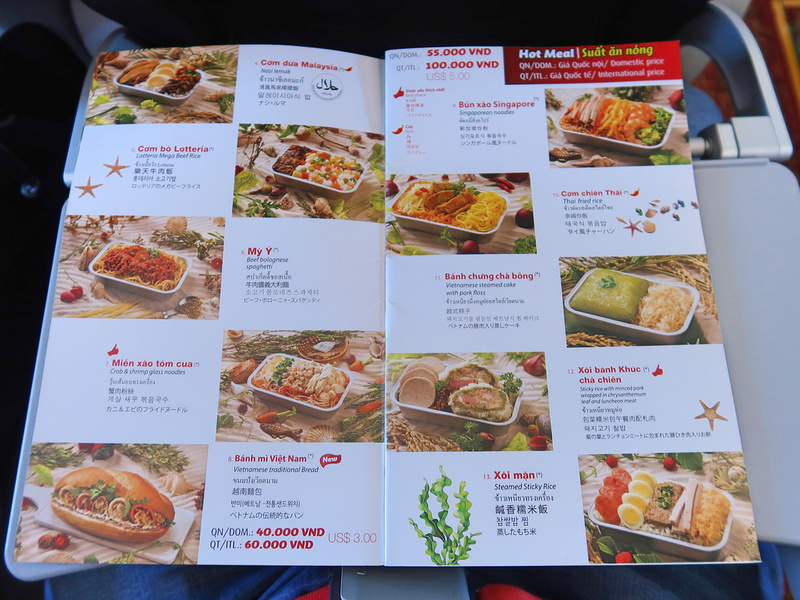 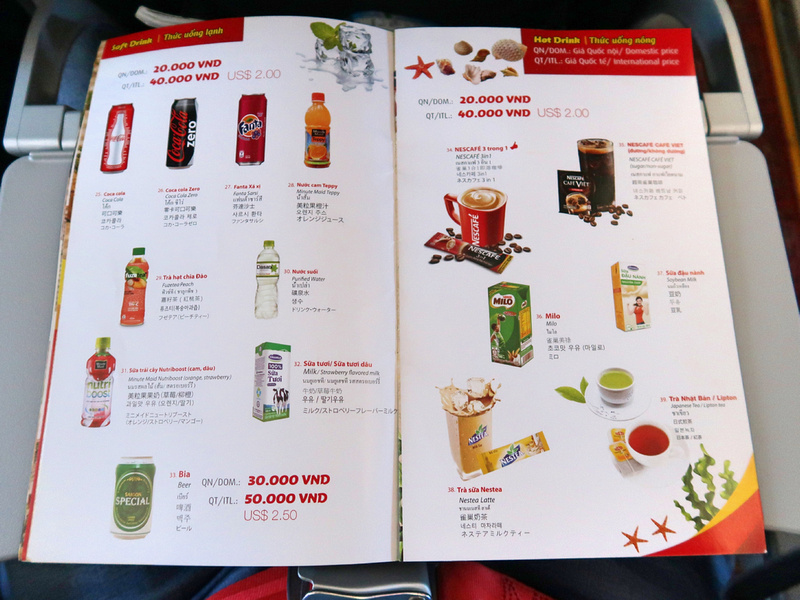 I didn’t prebook a meal as I thought I could get through the flight. I started getting hungry so I ordered instant noodles for 55,000 VND ($2.36 USD). 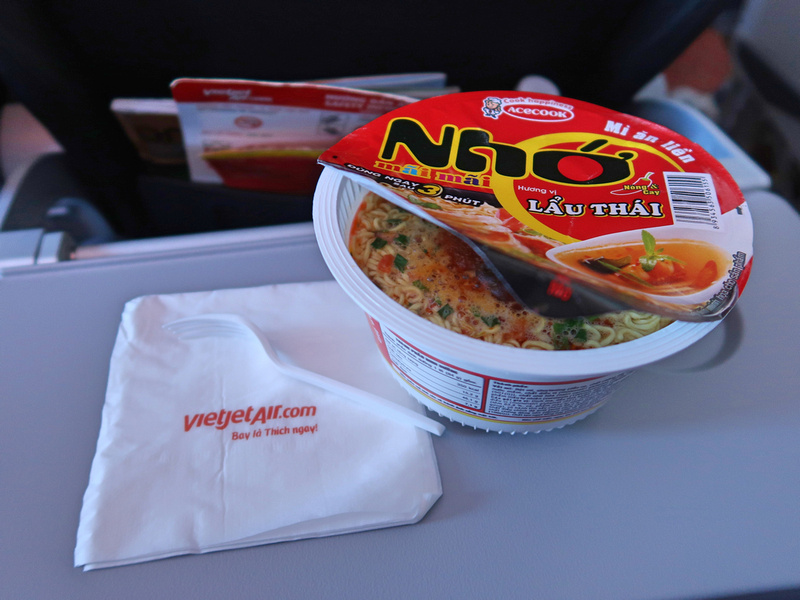 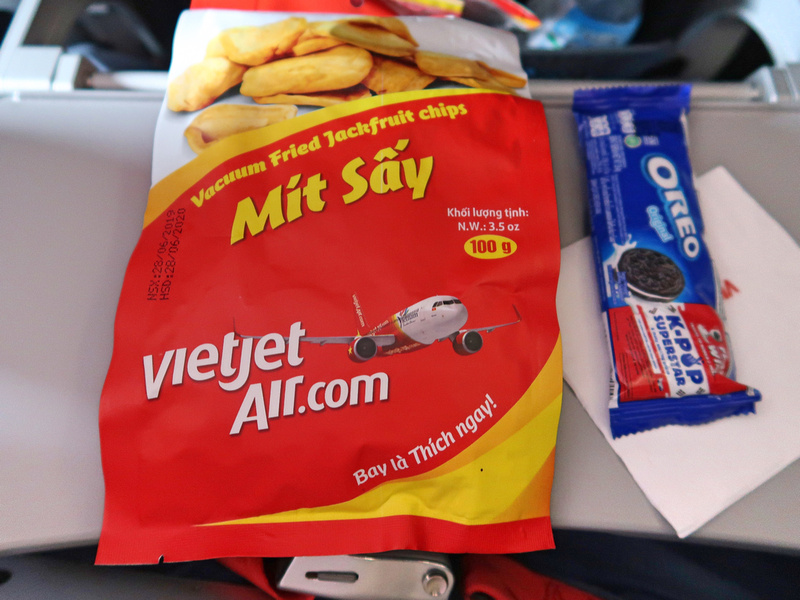 At least the snacks were cheap, but I should have been better prepared in the food department before my flight. The two Japanese ladies sitting next to me came prepared with a big bag of snacks, including onigiri and sandwiches from Lawson’s. Why didn’t I think of that! Even more remarkable about the two ladies was that they didn’t get up once for a toilet break. I can’t sit still for 6 hours (which is why I’m a nomad I suppose), but even if I could I do not have an iron bladder.

In addition to preparing snacks, you also need to be prepared to entertain yourself as there is no inflight entertainment. Despite the prospect of a long flight I was actually looking forward to the flight as a work session. My Macbook Air has a supposed battery life of 8 hours, so I had more than enough battery life for the flight. After a week of travel in Japan I had a backlog of photos to process and makes notes of, giving me enough work to do for the day. I just treated it like a work day.

The flight was 99% full, with the few empty seats probably being abandoned tickets. The flight is on an A321 with 40 rows of seats.

There was only one other westerner on the flight, and looking at the passports when boarding it was about a 50/50 mix of Vietnamese and Japanese passports. This is good news for the future of this route if it’s full and equally patronised by Vietnamese and Japanese. The Vietnam aviation market is booming, and VietJet will soon be adding direct Danang-Tokyo flights. There are now two Ho Chi Minh – Seoul flights a day, so I wonder if there would be future demand for two Tokyo flights a day.

I know some of my business friends would turn their nose up at flying a low cost airline for such a long flight. If a company was paying for my ticket I would fly a legacy carrier as well. I would rather save money though, and the $270 difference in flights is better spent on ramen and sushi in Tokyo. Looking at some of the young passengers from Saigon who were bringing back cool stuff from Tokyo, they would never have been able to fly to Japan before before the low-cost era.

We arrived at Tan Son Nhat, and once again I was on a flight were we deplaned on the tarmac as there were no airbridges. SGN Airport long ago reached its capacity, and the new airport for Ho Chi Minh City is years away from going into operation. 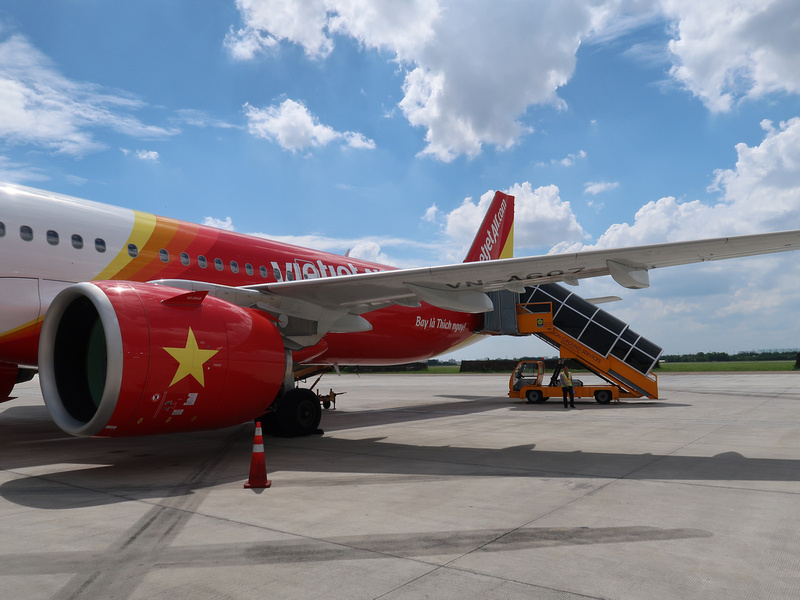 Overall this was a good flight option from Japan to Vietnam. I’m planning to do more travel to Japan so I may end up on this flight or the Danang flight in the future.