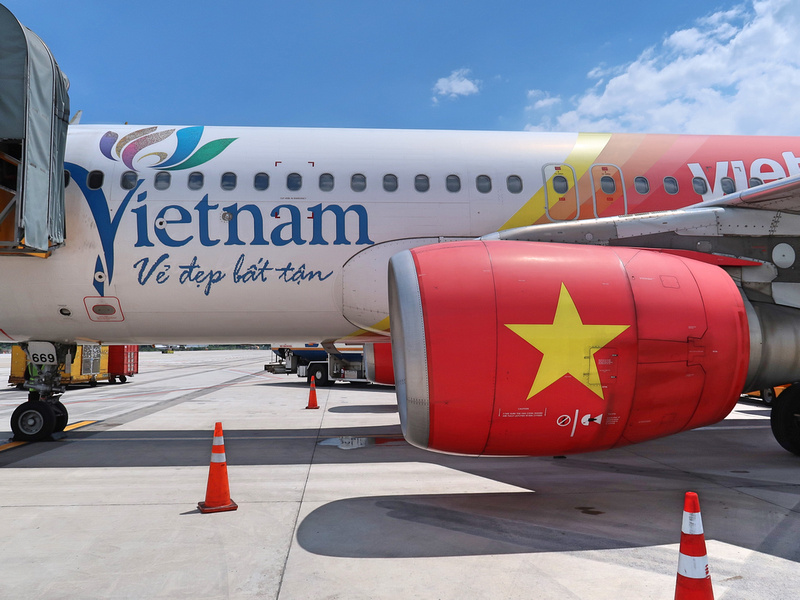 I flew with VietJet Air from Ho Chi Minh City to Taipei. There are a few airline options between the two cities so I compared fares with Skyscanner to find the right flight. In the end I went with VietJet Air for the price and time of day.

I have flown this route before with EVA Air by using frequent flyer points. They have more connecting traffic, so their tickets are better value when booked as part of a long haul flight.

I booked a return ticket for this trip , and there were two and three flights per day showing for different days. I went with the day time flights. Many of the cheapest flights from Vietnam to East Asia are overnight (such as my flight to Seoul), so I was happy to see a daytime flight. 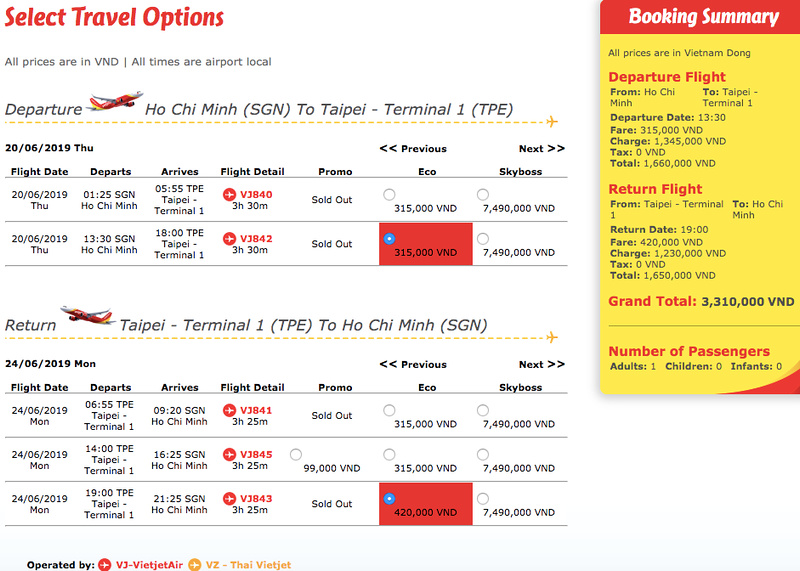 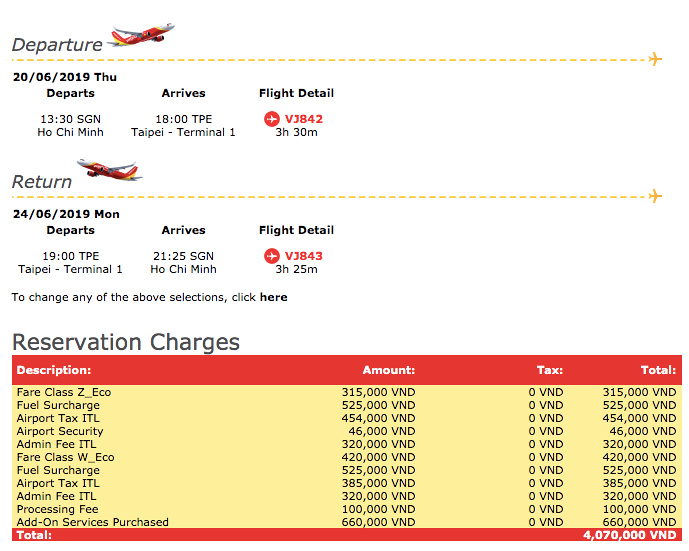 I checked in at the airport, and with so many flights from Tan Son Nhat (SGN) there is an open check-in for all flights. Lining up to check in in my least favourite aspect of flying, so I like that this is possible when flying from SGN. There was only one person in the queue in front of me when I arrived. 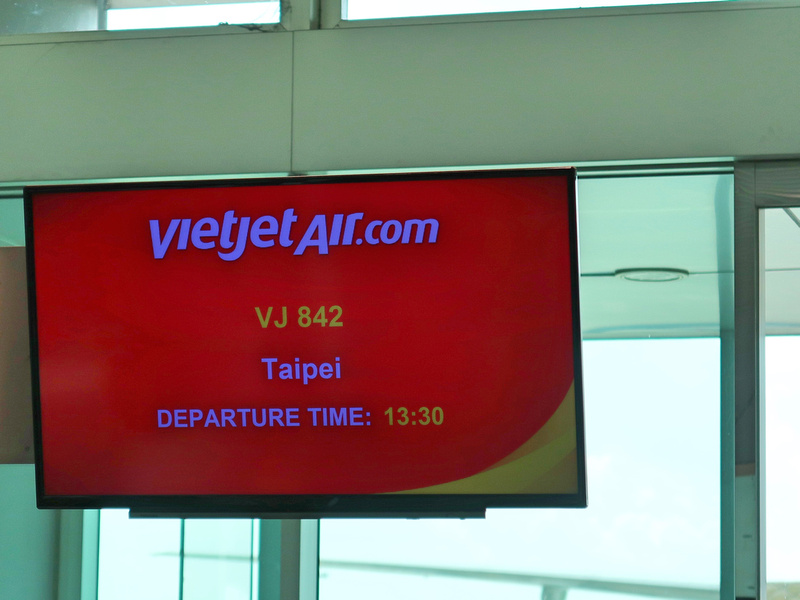 Tan Son Nhat is well run considering how over capacity it is. I’ve long since given up expecting to get an air bridge when flying with VietJet Air, so it was no surprise when the flight boarded from a lower gate to get a bus to the plane. 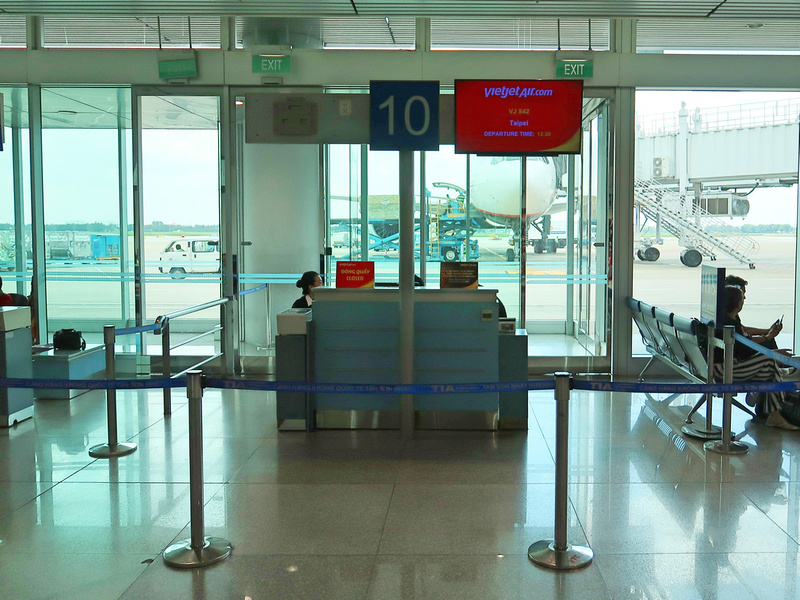 There is a new airport planned for Ho Chi Minh City, but that won’t be ready until at least 2025. The current airport is planning to expand in between that time, but until then expect more tarmac boardings. 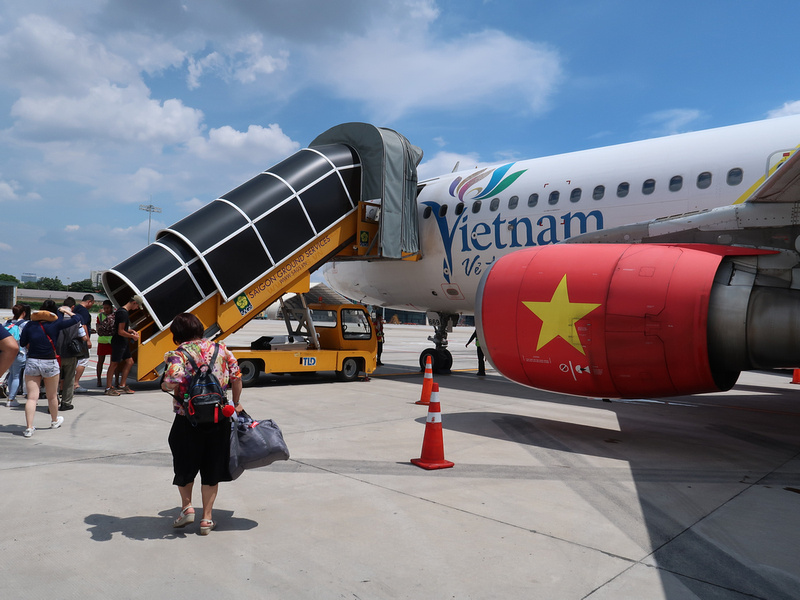 VietJet Air flight VJ 842 departs at 13:30 and arrives at Taiwan Taoyuan International Airport at 18:00 for a scheduled flying time of 3H, 30M.

VietJet Air is a low cost airline, so seat space isn’t a selling point. There was about 1 or 2 fingers width between my knees and the seat. 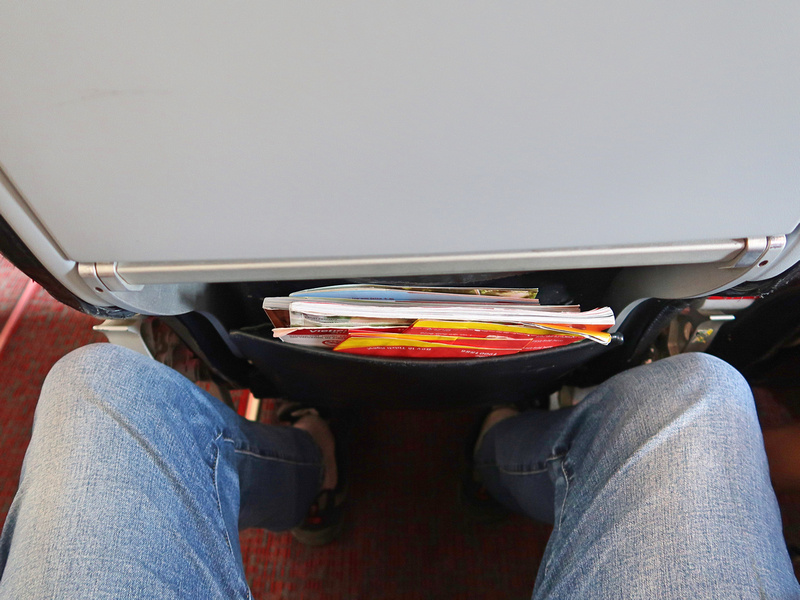 one2fly – the inflight magazine of VietJet Air. The magazine is in Vietnamese with some articles translated into English. They don’t have a route map, which is the main reason I read these magazines. 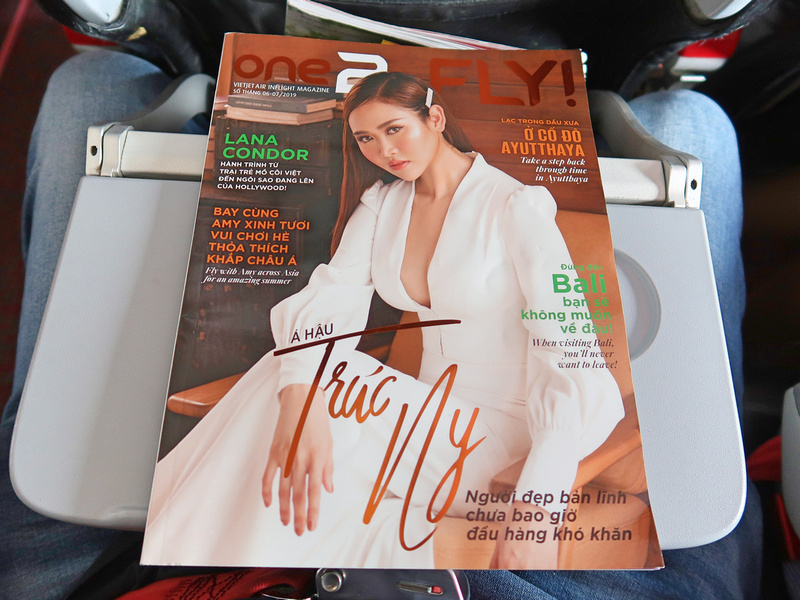 There is a separate menu with food and snacks available to purchase. 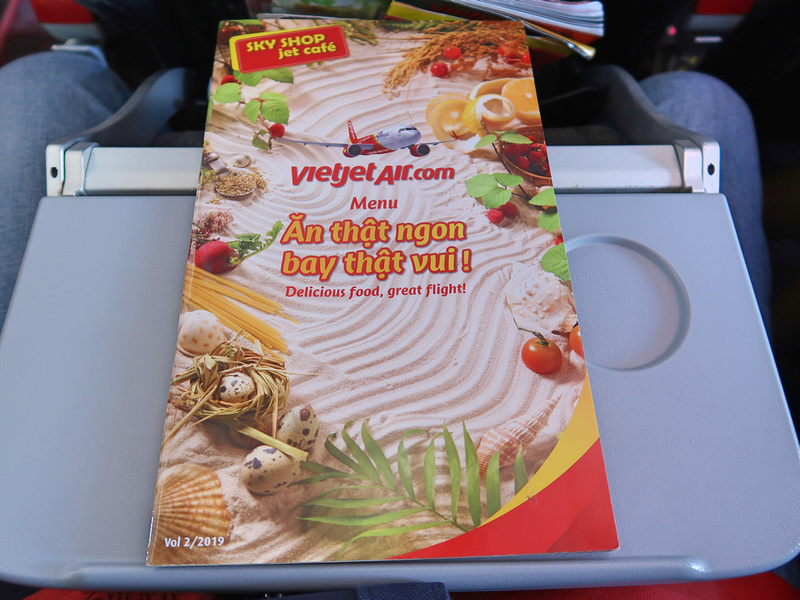 A hot meal is 100,000 VND ($4.29 USD) on international flights, which is one the cheapest airline meals I know of. I have been to Taipei before so I already had in mind what was going to be my first meal back. I had no intention of ruining my appetite with an airline meal. 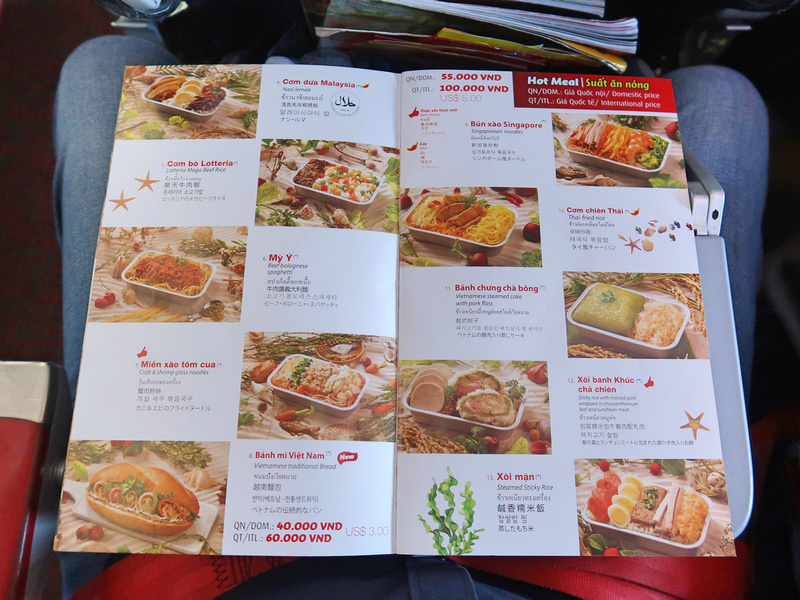 Drinks are cheap as well. 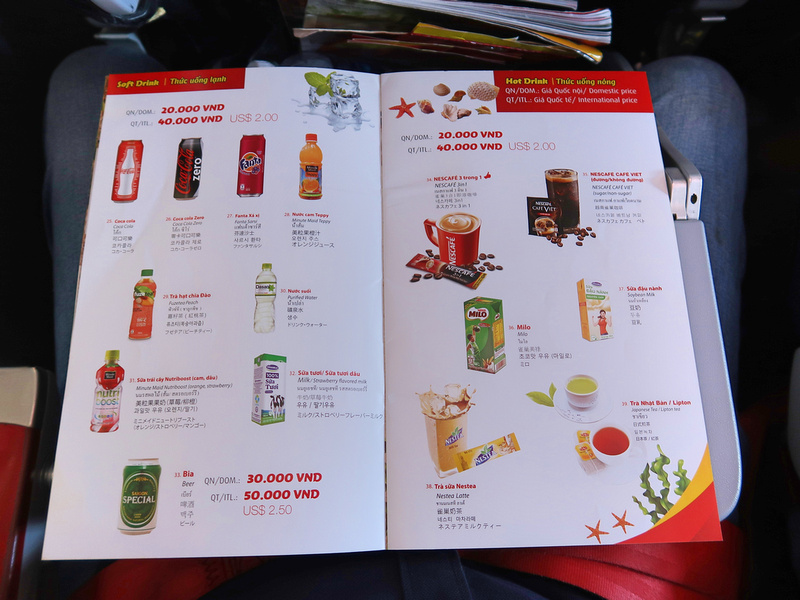 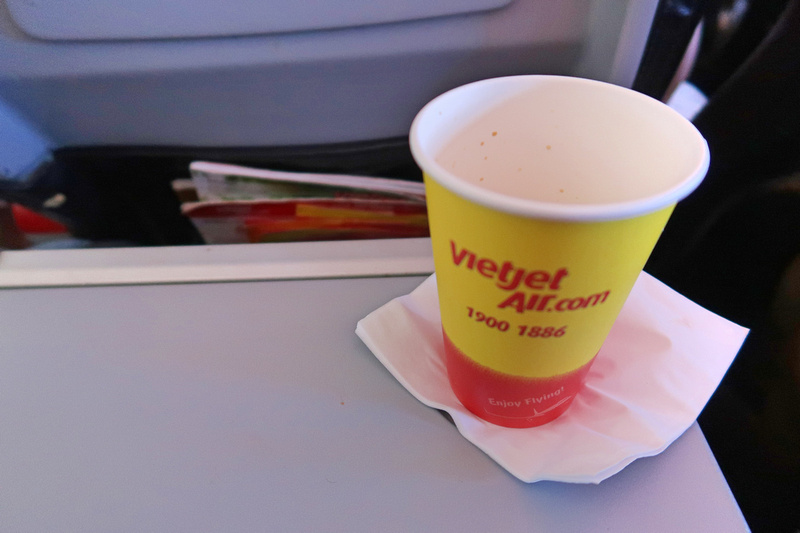 Overall this was a good flight option to Taipei from Ho Chi Minh City. Obviously I would have preferred the leg room that you get on EVA, but after arriving I was happy to have saved the money.

I’ve flown with VietJet from Taipei previously, so here is my review of the flight from Taipei to Ho Chi Minh City.