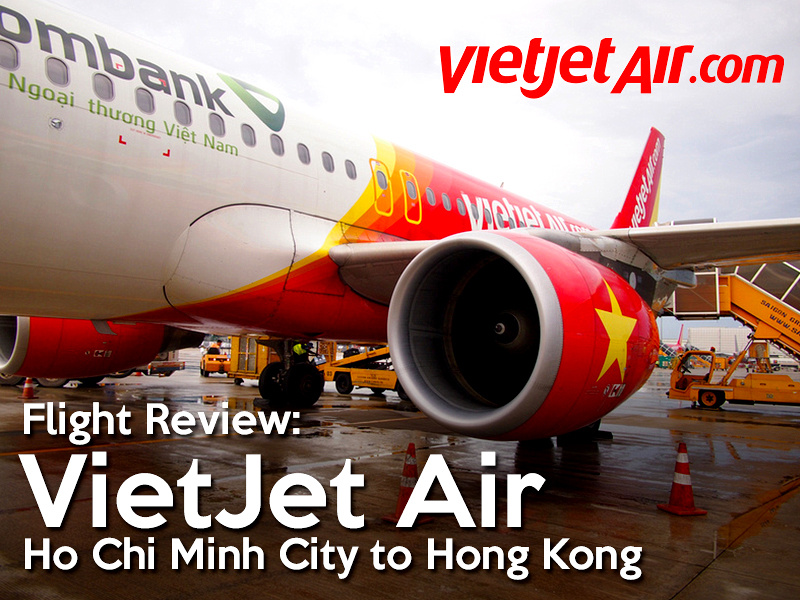 I flew with VietJet Air from Ho Chi Minh City to Hong Kong. I compared flights with Skyscanner, and Vietjet was the cheapest option.

Being based in Vietnam I’ve become a regular flyer of Vietjet. I last flew them from Hanoi to Seoul, and earlier this year I took the return leg of this flight.

At the time of my flight there wasn’t online checking in available, so I checked in at the airport. I didn’t buy a seat selection, but it’s no problem if you ask for a window or aisle when you check in. 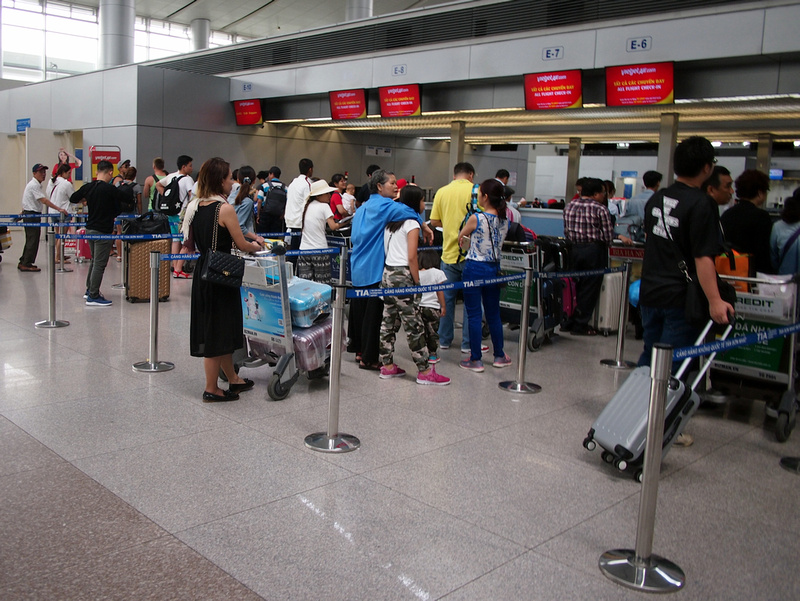 Tan Son Nhat International Airport (SGN) long ago ran out of room, so the chances are if you are flying a low cost airline you are getting the bus to the aircraft. 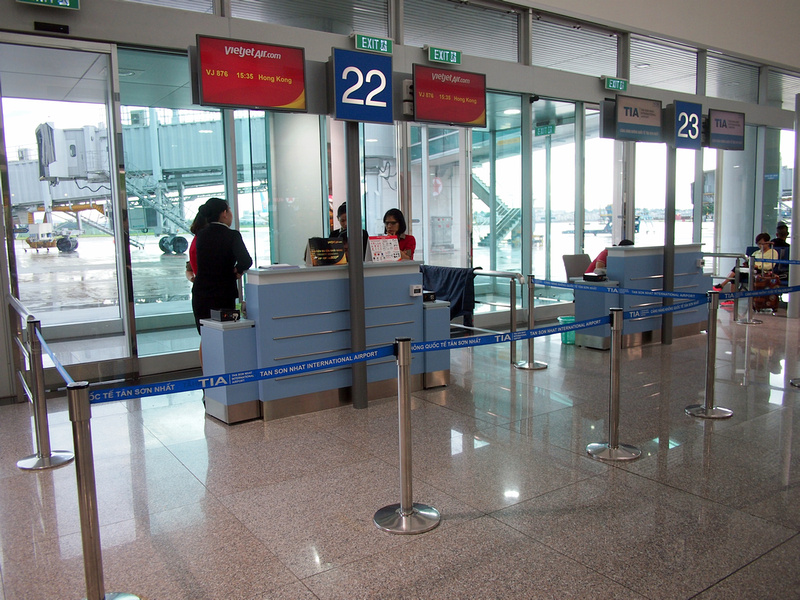 Ahh the joy of tarmac boarding. 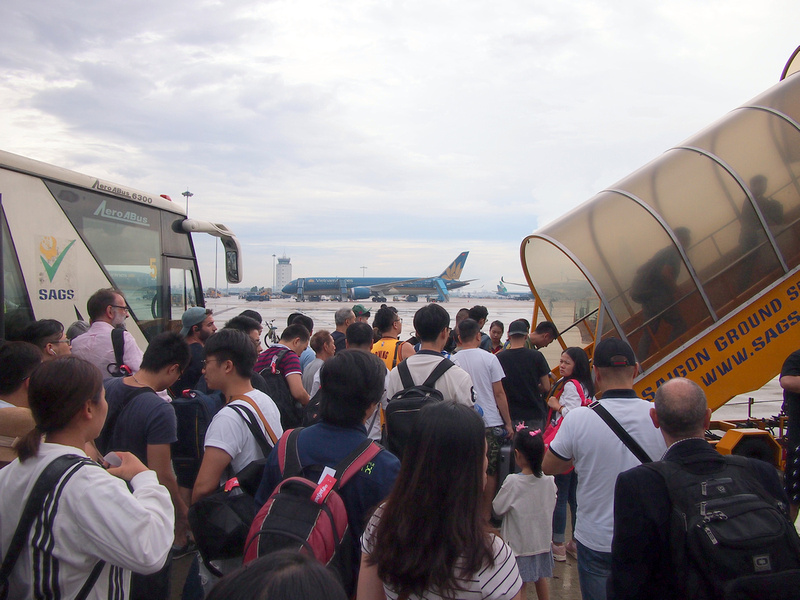 At least it stopped raining when we boarded. 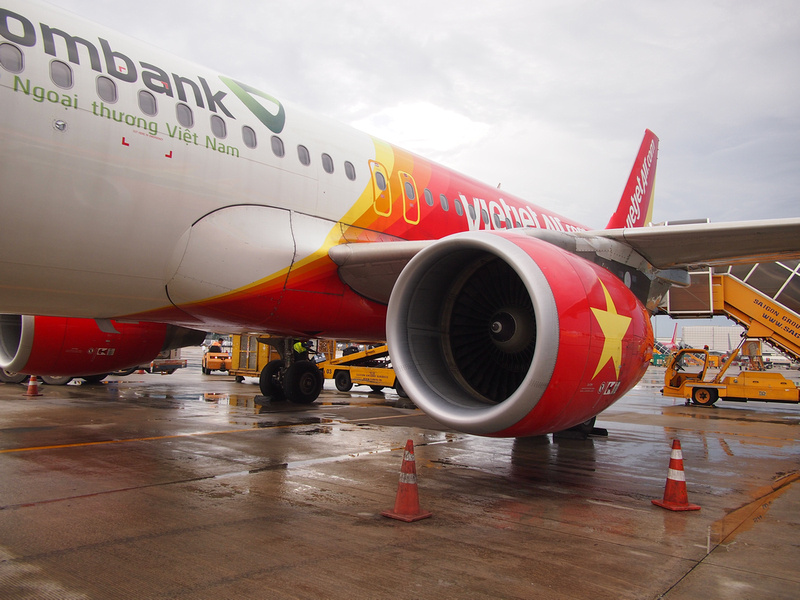 It was my lucky day as I scored a whole row to myself. 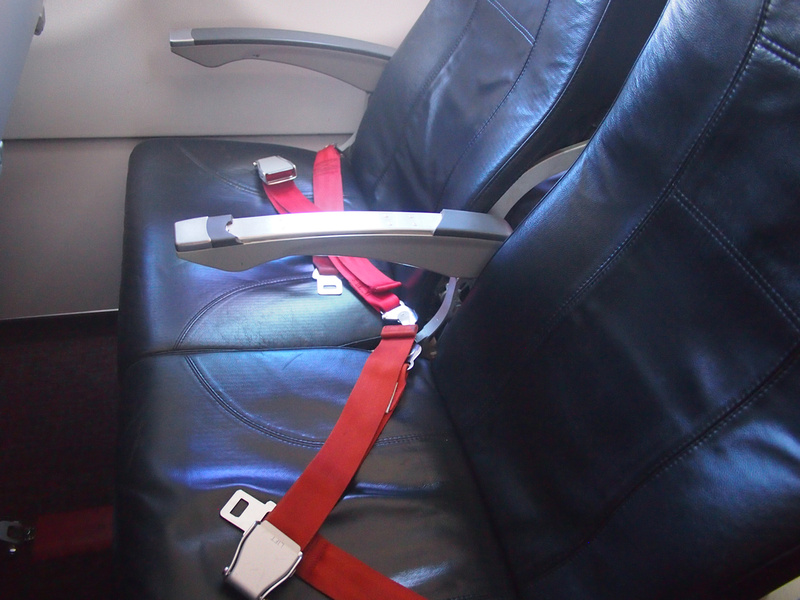 one2fly – the inflight magazine of Vietjet Air. It’s mostly in Vietnamese, with a few translated articles at the back. I mainly go through it to see the ads of property developments and weird herbal remedies. 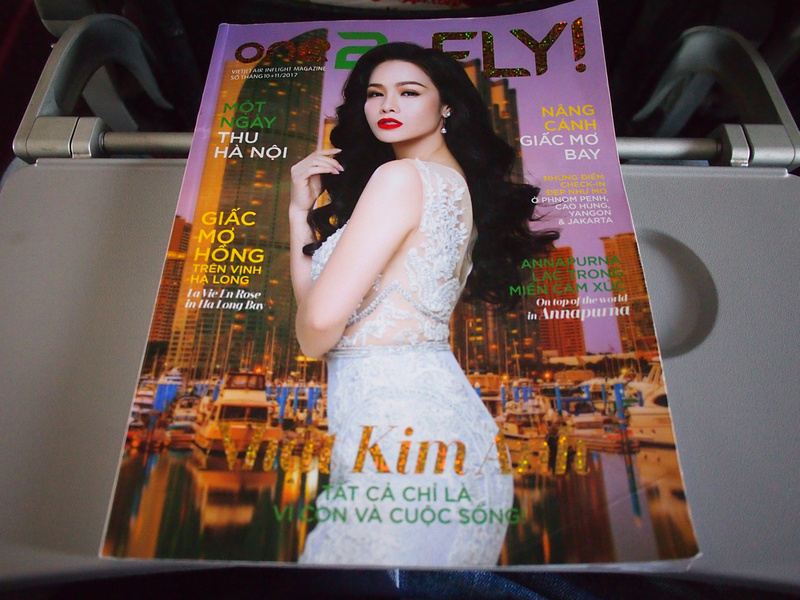 I also read the magazines for the route map to get future inspiration, though Vietjet have this visually unstimulating list of destinations. 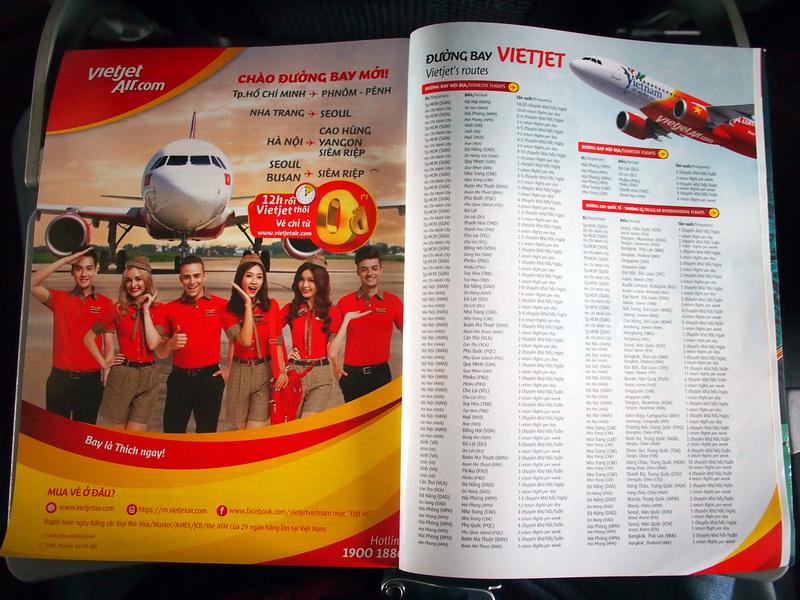 There was an announcement of a new service from Ho Chi Minh City to Jakarta, so that will give me better options to visit Indonesia in the future. 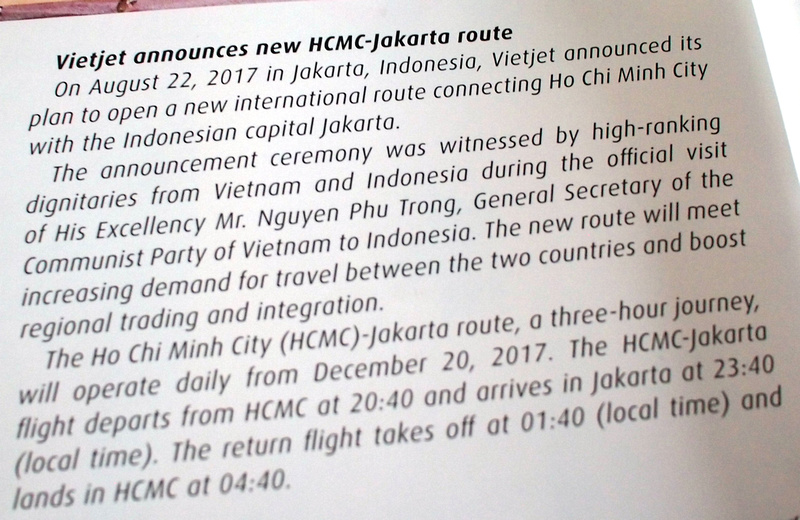 One thing that Vietjet became (in)famous for was having bikini-clad models onboard. They were contestants of a beauty contest onboard the inaugural flight from Saigon to Nha Trang. From there it became a thing where people thought that Vietjet air stewards are wearing bikinis.

I’ve had a few guys do the old nudge-nudge wink-wink when I say I’m flying Vietjet, as if it is going to be a bikini-fest. I couldn’t think of anything more awkward to be on a plane with a bunch of Vietnamese dudes ogling women.

Anyway, I mention that as this advert caught my attention. Perhaps to cash in on their notoriety for being “the bikini airline”, Vietjet are sponsoring Miss Universe Vietnam 2017. 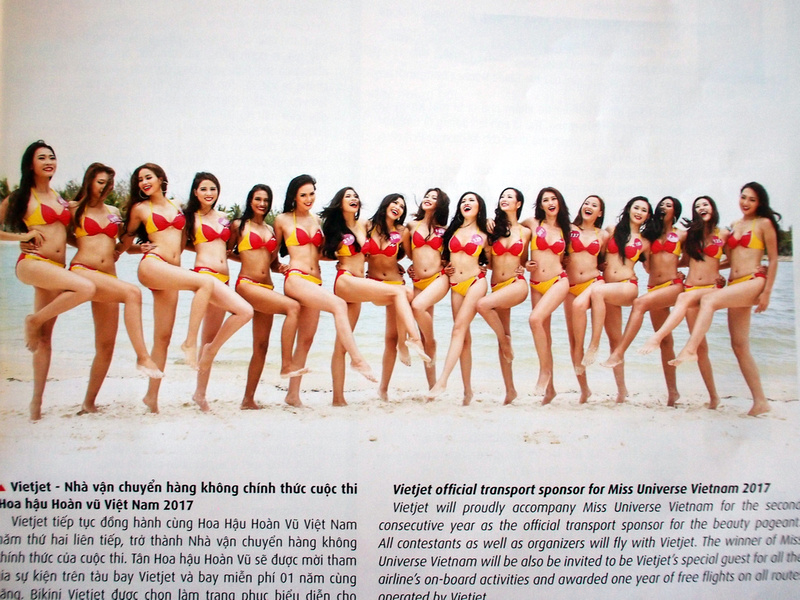 As Vitjet is a low cost airline, meals and drinks are extra. You can order online before you fly for a discounted rate, or buy form the trolly. 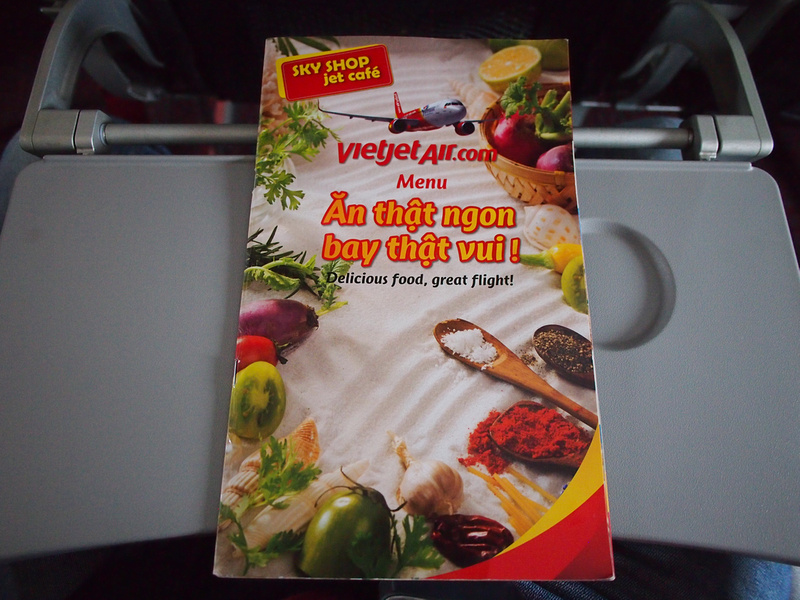 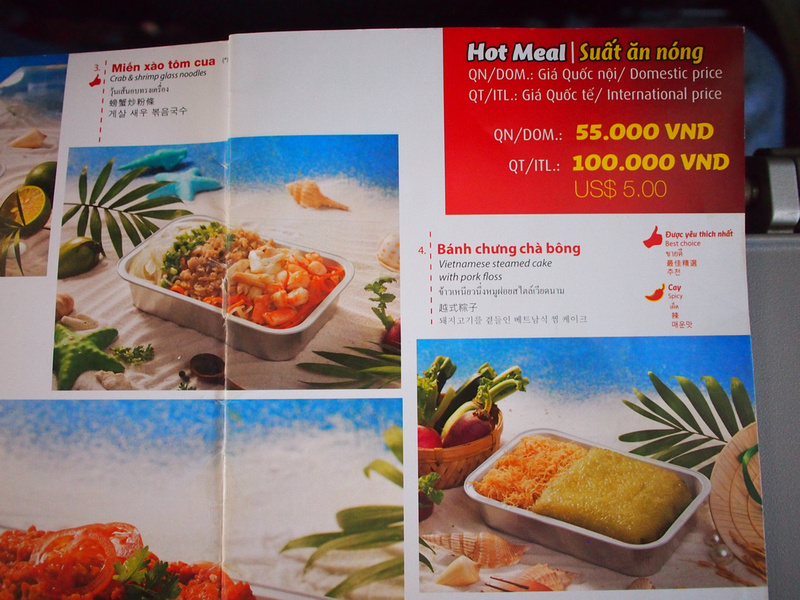 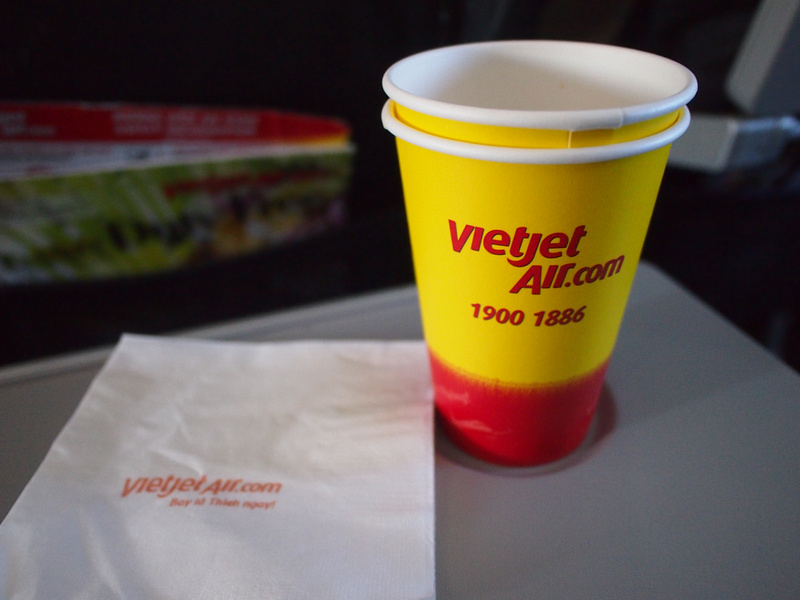 Overall this was a good flight to travel to Hong Kong on the cheap.