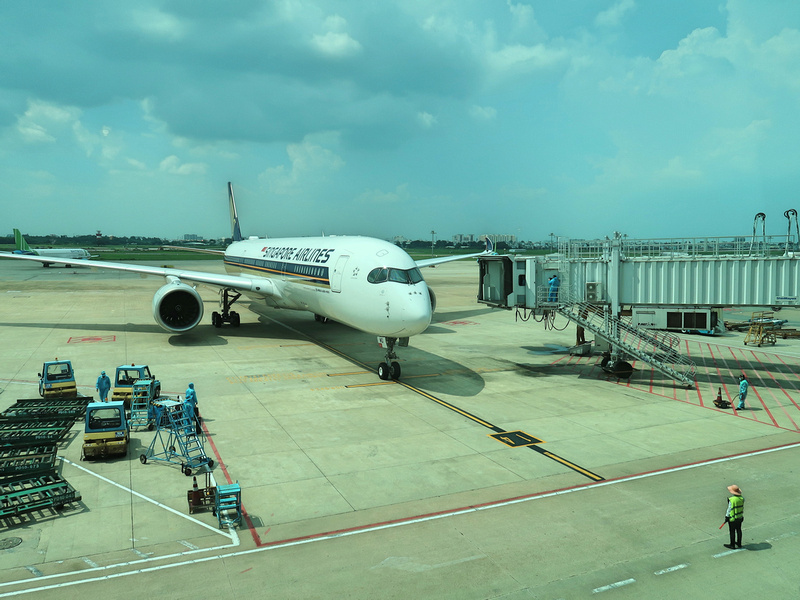 International travel had become so normal for me that I would usually not think too much about it. Now I found myself facing the pre-travel nerves I had when I first went overseas. My journey from Saigon to Zagreb was going to take a minimum of three flights, so I picked an airline combination that offered the best travel times and ease of transfer at airports. With that in mind I picked Singapore Airlines, which accounted for two of the three legs of this trip.

I arrived at Tan Son Nhat to see a deserted international terminal. This airport is usually a hive of activity, so it was unnerving to see it like this. 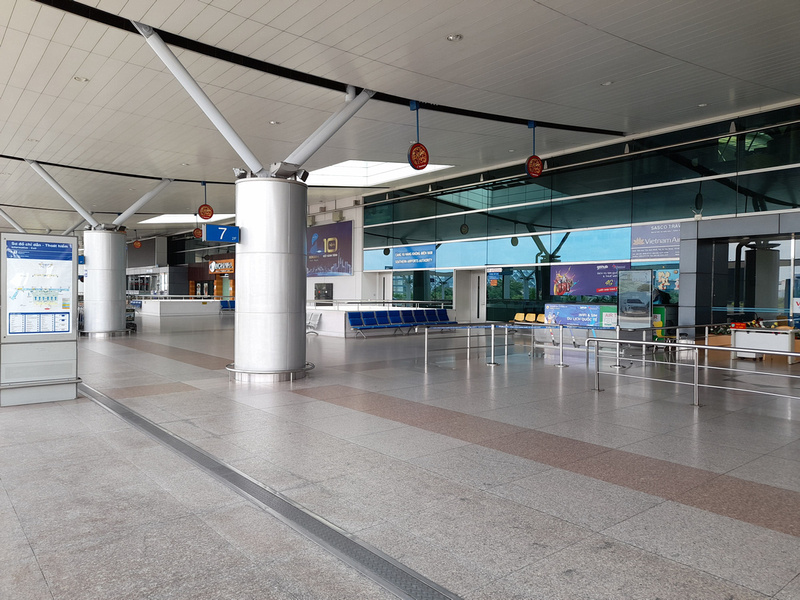 SGN Airport had become so busy that they are now building a second airport for Ho Chi Minh City. On this day I counted five international passenger flights, two of which were Singapore Airlines. 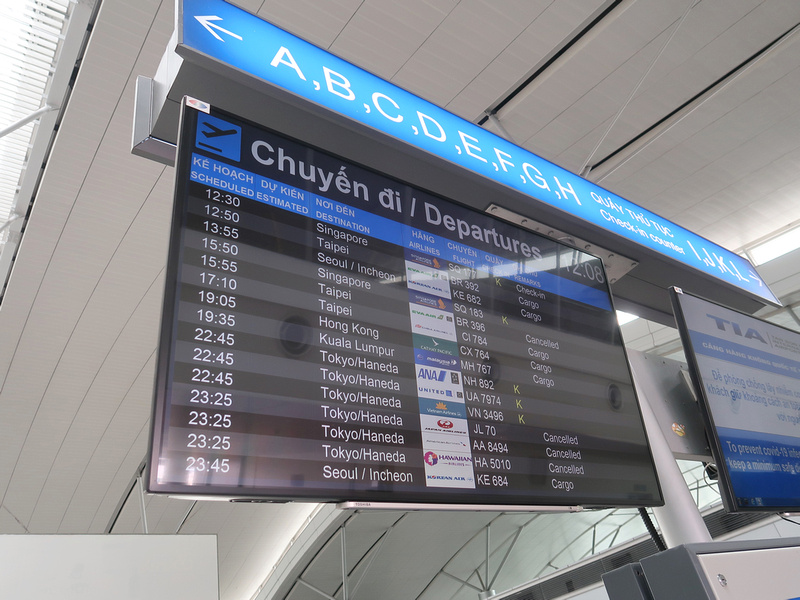 Passengers have to get a Covid test before flying, no later than 72 hours from your arrival date (depending on where you are going). Even though someone could catch the virus before the flight, I felt a bit better knowing that it is most probably a virus-free flight.

The flight was on an A350 aircraft. Singapore Airlines usually fly a 777 to SGN, and there is always enough demand to fill it. Judging from the number of people that checked in, this was going to be a light flight.

The flight crew were wearing blue protective gear with plastic face shields, adding to the drama of flying during the pandemic.

SQ 183 departs SGN at 15:50 and arrives at SIN at 18:50, for a flying time of 2 hours. I usually ask for a window seat on short flights like this, but on this flight, we got whole rows to ourselves.

I thought it was odd that Singapore Airlines were running another flight three hours earlier when there were so few passengers on this flight. They must be flying with a belly full of freight to make some money back. 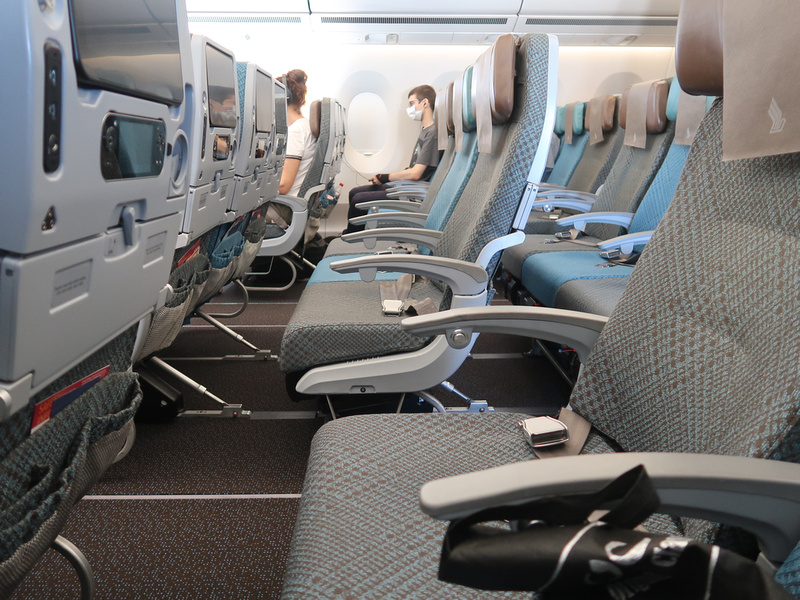 Once the seat belt sign was turned off, the cabin crew emerged with their plague attire taken off.

In addition to the bottle of water and headset that is usually handed out, we were given a “care kit”. 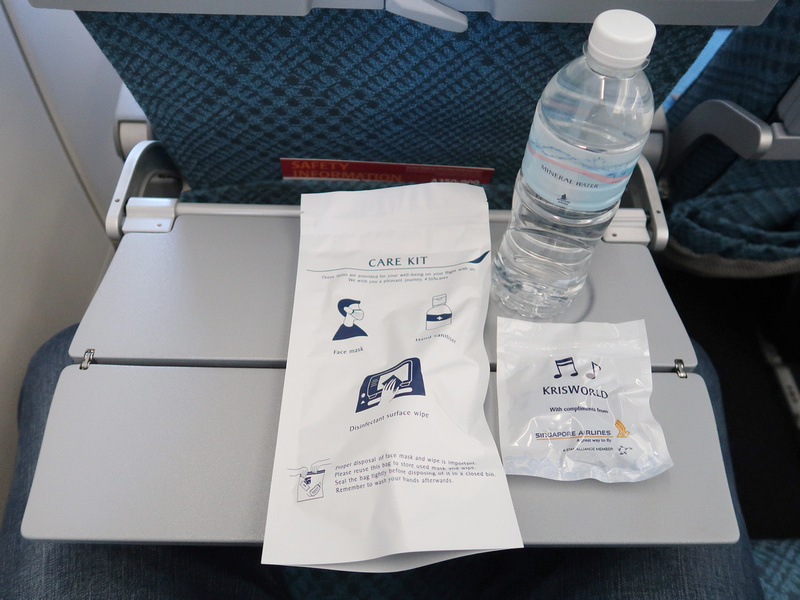 This contained a small bottle of hand sanitizer, a wet wipe with sanitizer, and an individually wrapped face mask. It was mandatory to wear a mask on board, but I guess this is a spare if yours breaks, or for the occasional maskhole who might make an excuse for not having one. 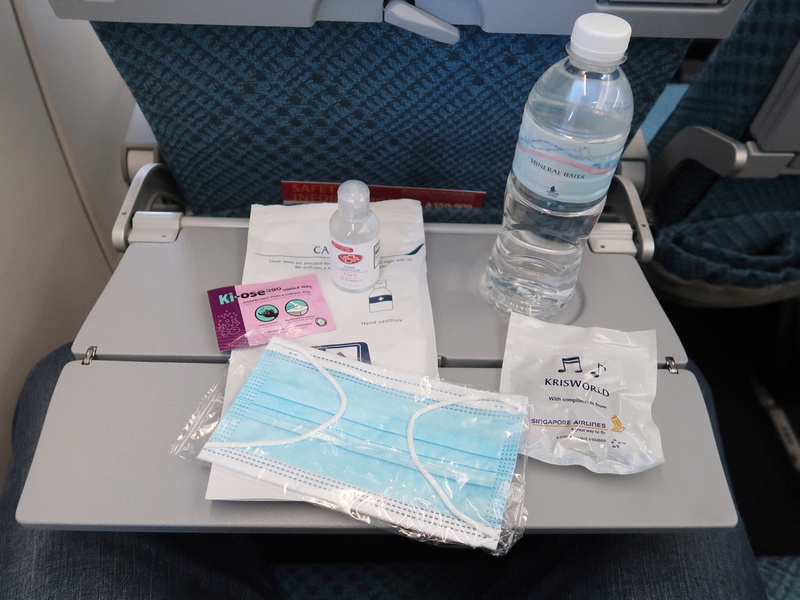 Singapore Airlines is well known for having quality inflight catering. Every flight I’ve taken between SGN and SIN includes a hot meal. I was surprised then to see a reduced service of a simple lunch box meal. 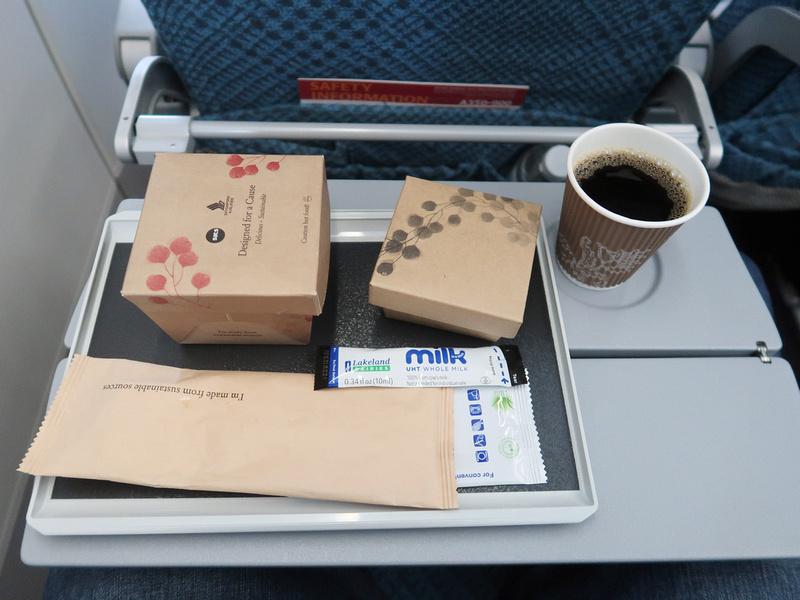 There were no food outlets open at Tan Son Nhat, so I was ready to eat anything at this point. I got this chicken fried rice box, with some sort of delicious cake dessert. 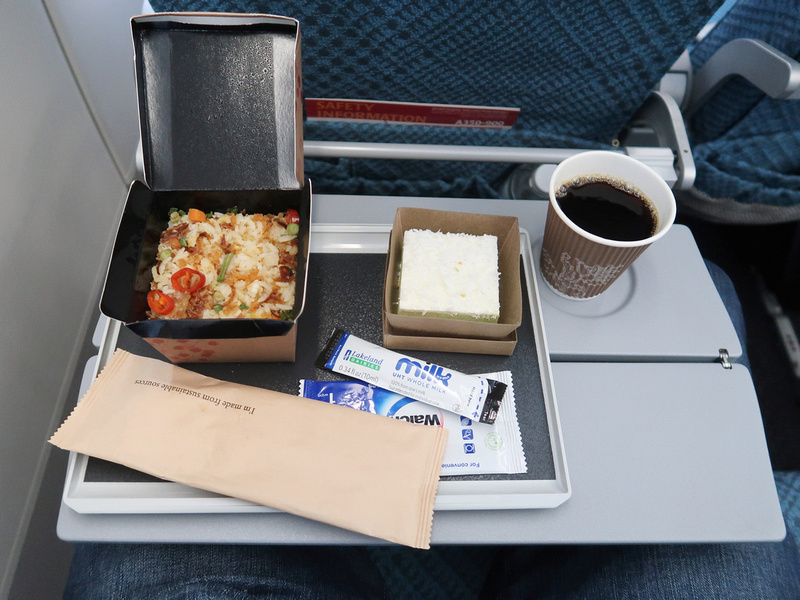 There is inflight entertainment available, but at about 1 hour and 45 minutes of flying time, there is not enough time for a movie. 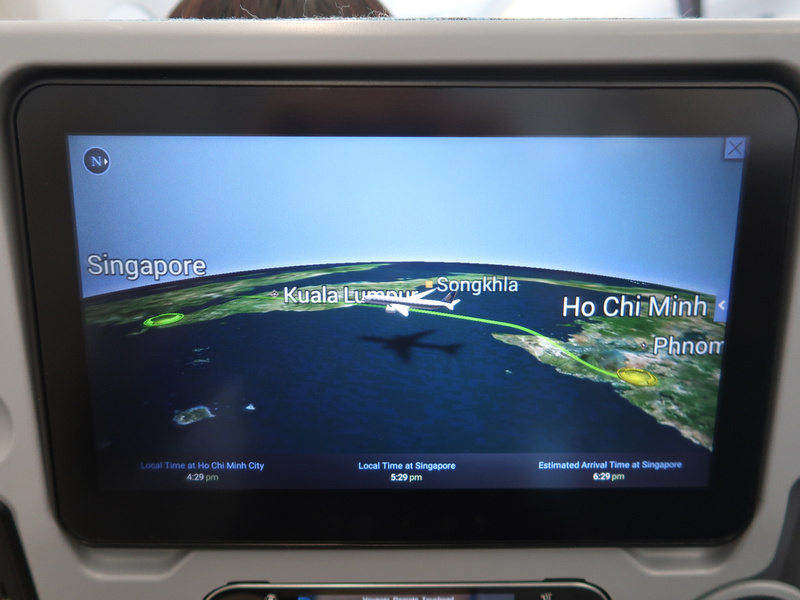 We arrived at Changi on time, which would have been weird if we didn’t when you consider how little traffic there was. 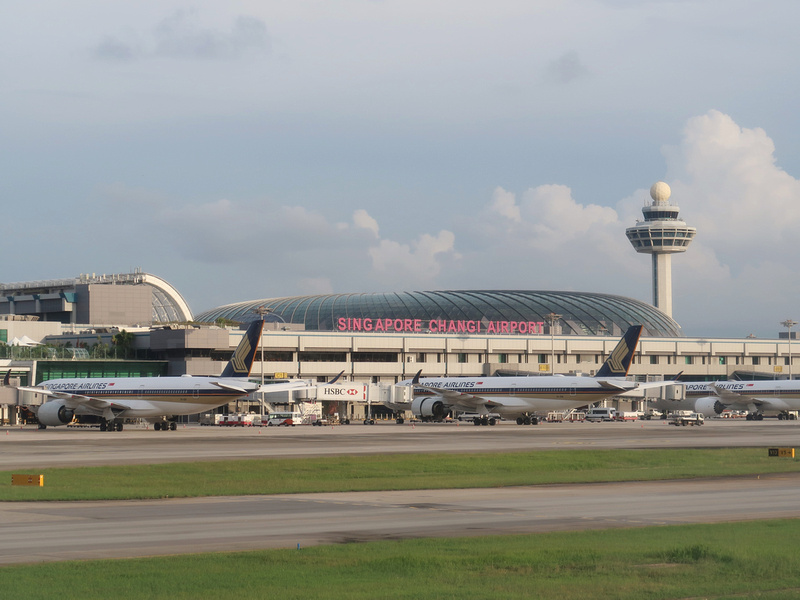 As we left the plane we had our body temperature scanned, and then we were tagged all clear with a green bracelet. 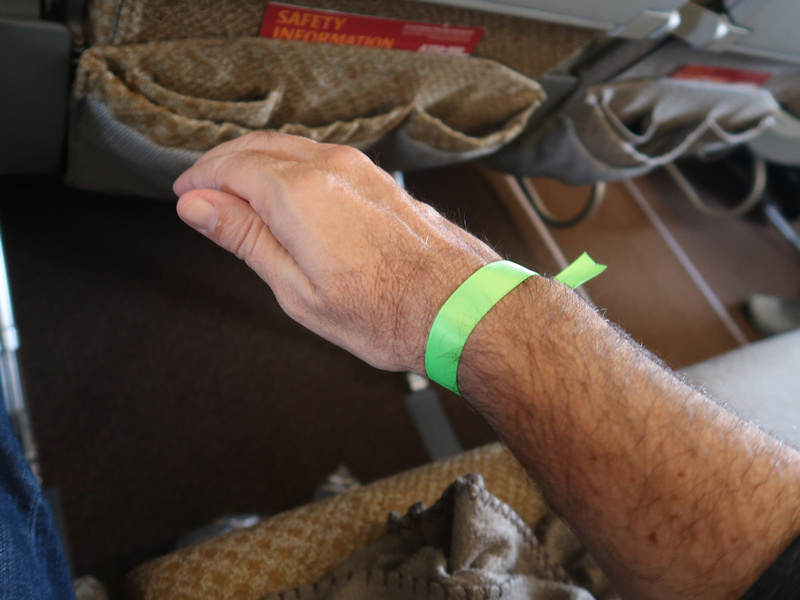 As a major regional air hub, there was more activity at Changi, but things were not normal here either. Terminal 2 was closed for renovations (making good use of this pandemic downtime), so we were diverted to a reduced-service Terminal 3. 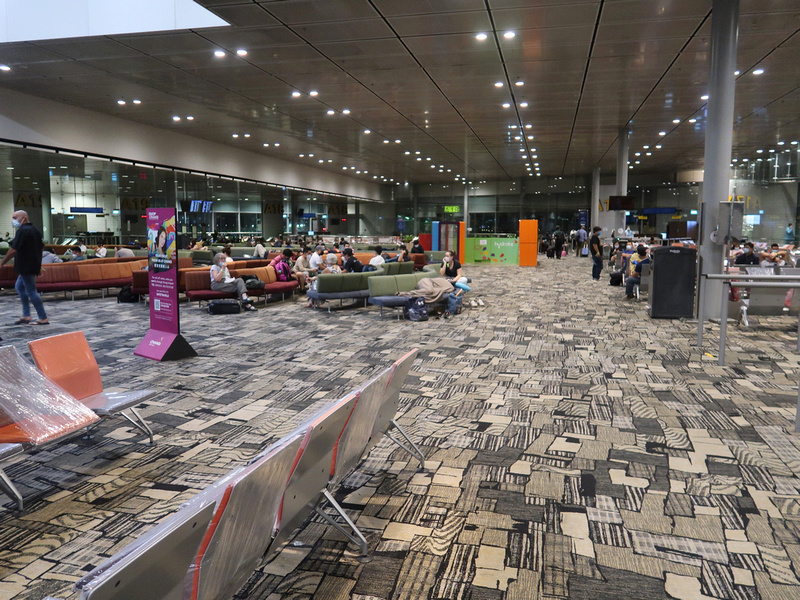 Most of the seating areas were sealed off and all of the shops were closed. In the area that was open, seats were wrapped up to avoid people sitting in large groups. 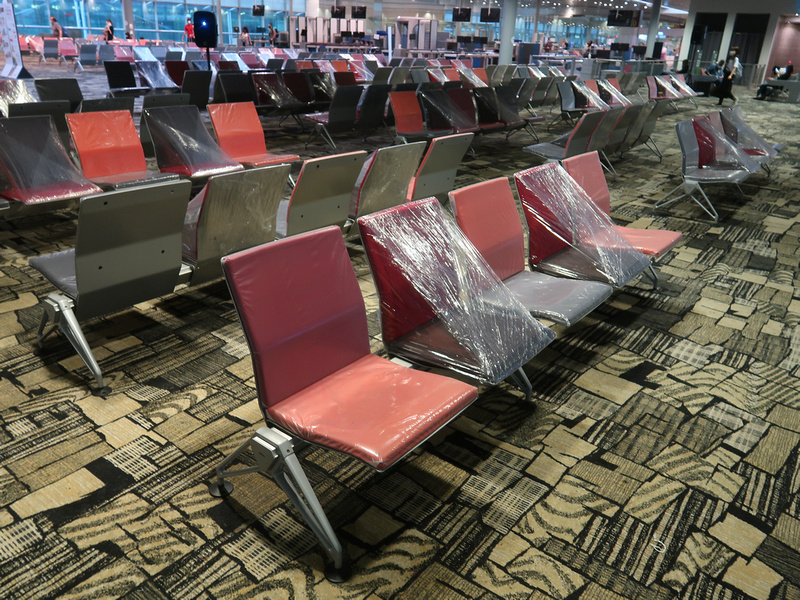 A sticker reminding us of the times we live in. 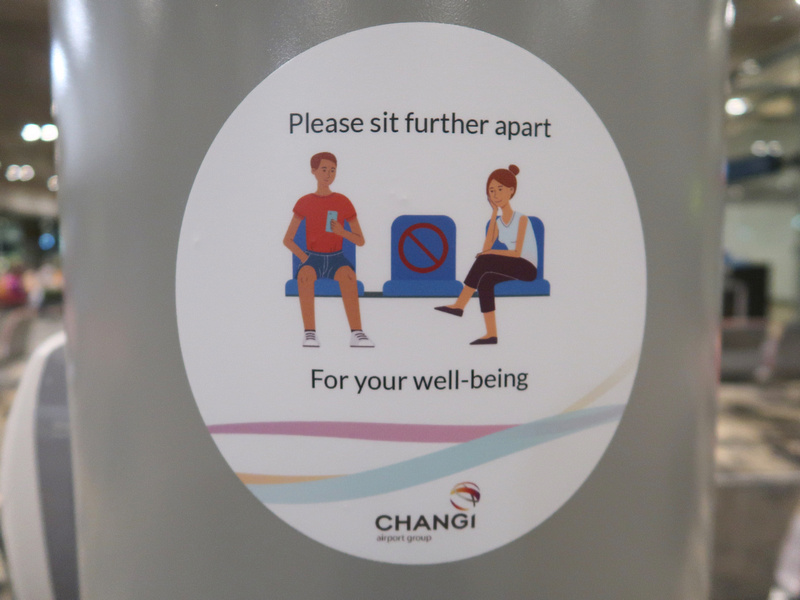 And smokers have to be considerate of social distancing as well. 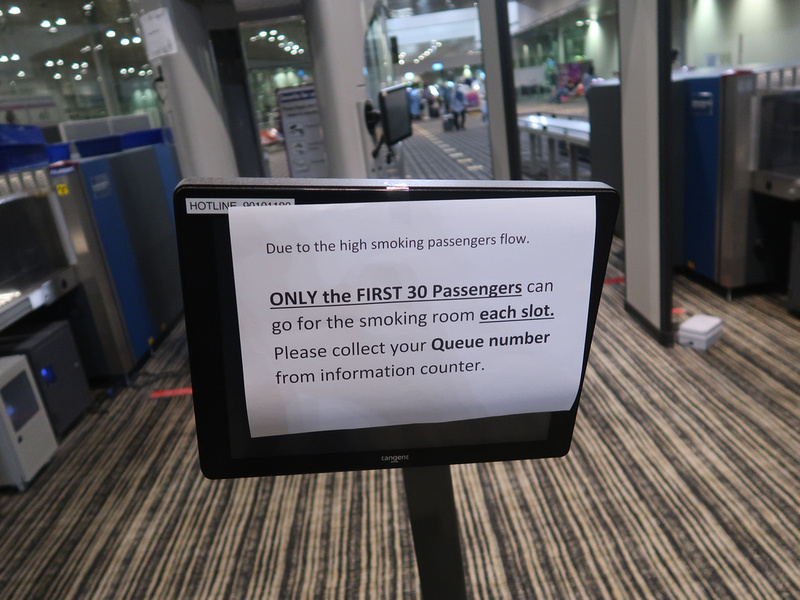 Food was available by ordering from a menu accessed by a QR code. I’ve been to Changi enough times to know some places that I like to eat at, and I knew what I was going to have when I arrived – laksa. 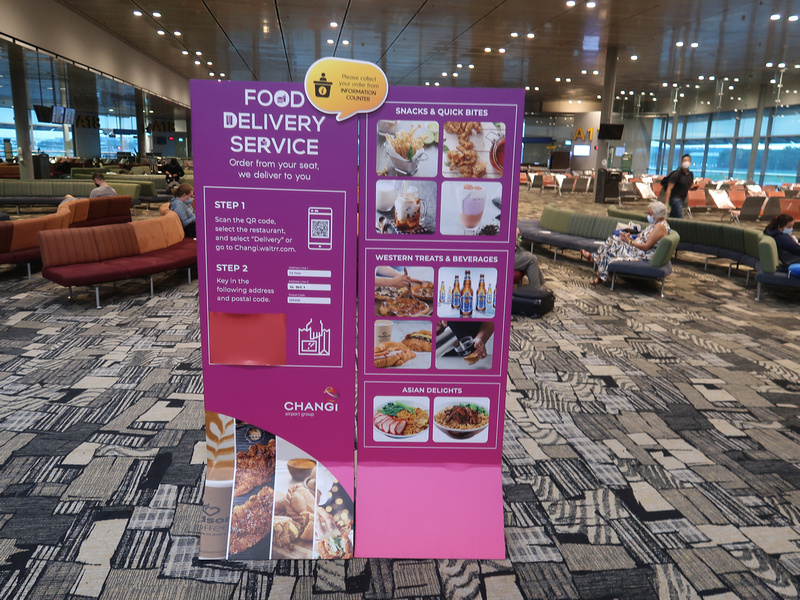 If my heart wasn’t so set on having laksa I might have tried this meal vending machine, if only to blog about the experience. I’m glad I had the laksa though. 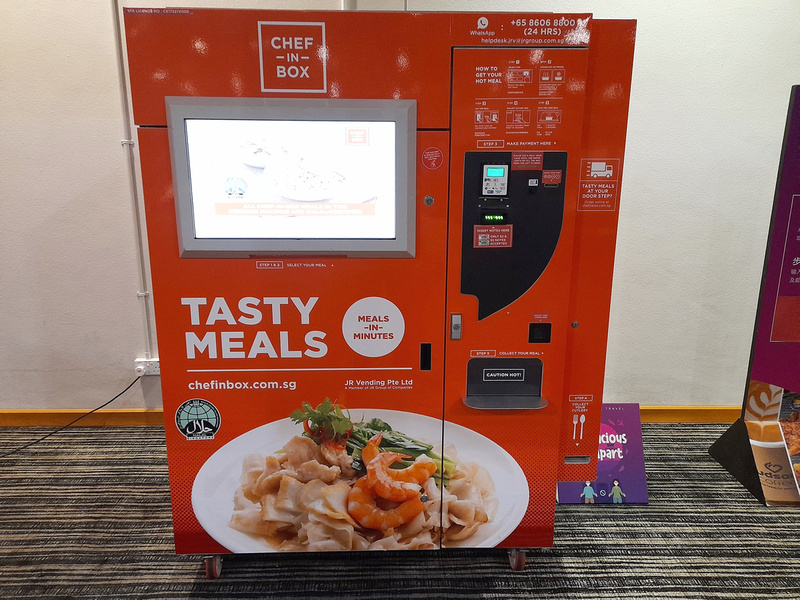 The departure board at least looked somewhat normal, with long-haul flights departing through the night. 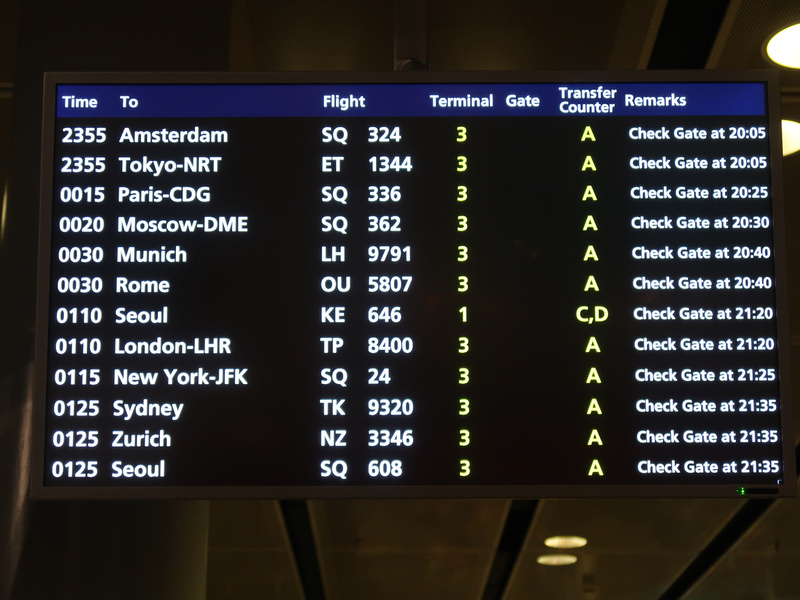 The flight crew were dressed in the usual Singapore Airlines uniform without wearing protective gear. They only wore this when arriving and departing from Tan Son Nhat. Ho Chi Minh City has become such a Covid hotspot that it is seen as a hazardous place to fly to.

The flight to Munich was just as empty as the SGN-SIN flight, and this was also on an A350 aircraft. I didn’t count every passenger, but in the back section, I counted 20 passengers in 149 seats (so about 14%). 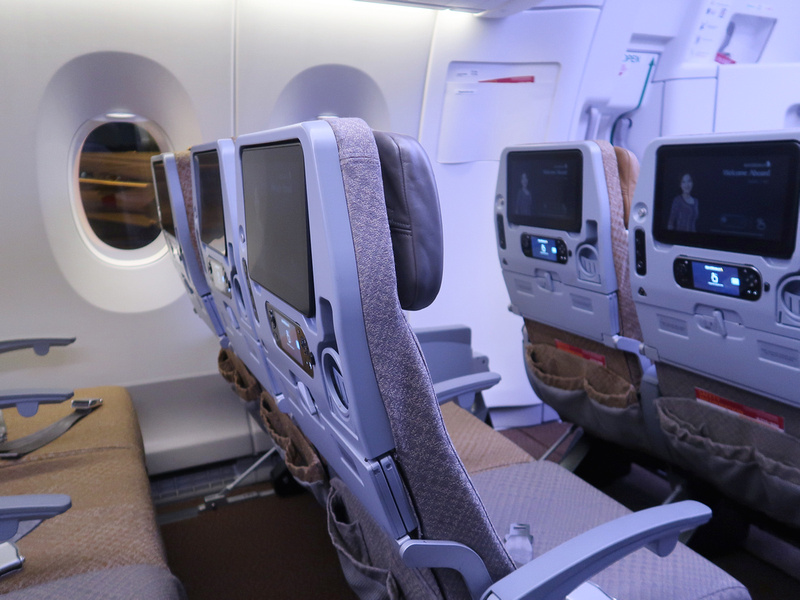 We were given a care kit like the one I got on the SGN-SIN flight.

Unlike the SGN-SIN flight, there was a normal meal service on this flight. I’m a bit of a weirdo because I actually like inflight meals. Perhaps it is the combination of having something to do while flying, plus the association that inflight meals have with flying somewhere far away. Also, I had just come out of six weeks of hard lockdown where I had not had a meal outside my house.

I put this disclaimer here to say that you should not rely on me for food reviews in the best of times. In my state of bewilderment of having been released into the world again, this was the second yummiest thing I had had all year (after the yummy laksa at the airport). Seriously though, this was a fine chunk of chicken breast. 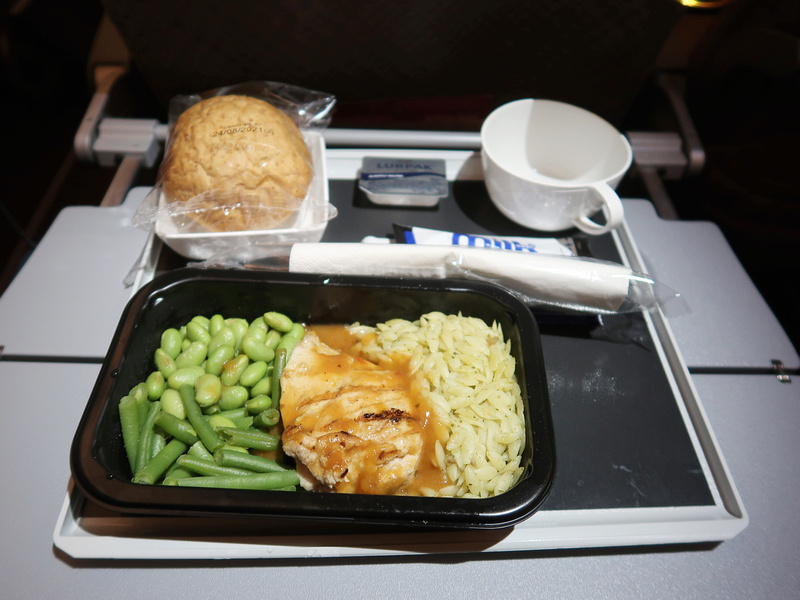 And you also always get ice cream on Singapore Airlines flights. 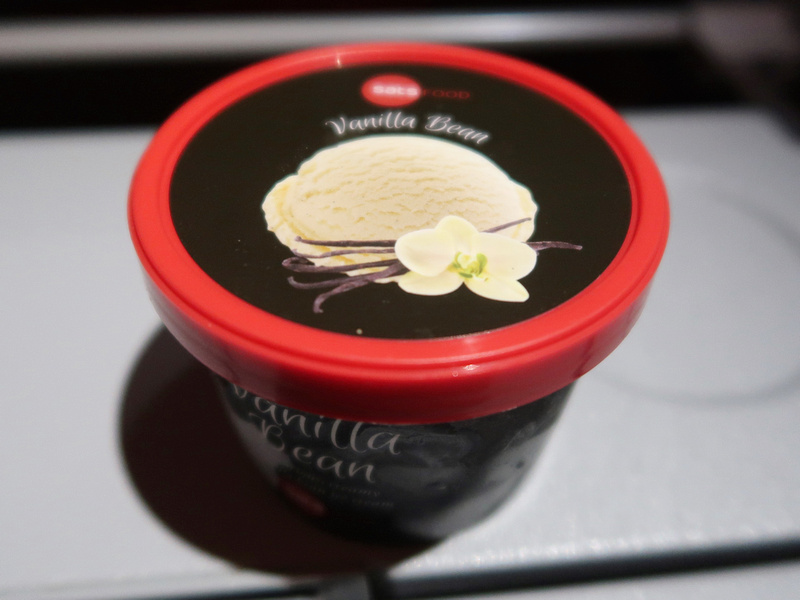 I can barely sleep on flights, so I usually resign myself to having a movie marathon. Another thing the pandemic has done has to disrupt the movie industry. There have hardly been any new releases over the last year, and nothing appealed to me on this flight. With 12 hours of flying, I figured I should try and sleep. 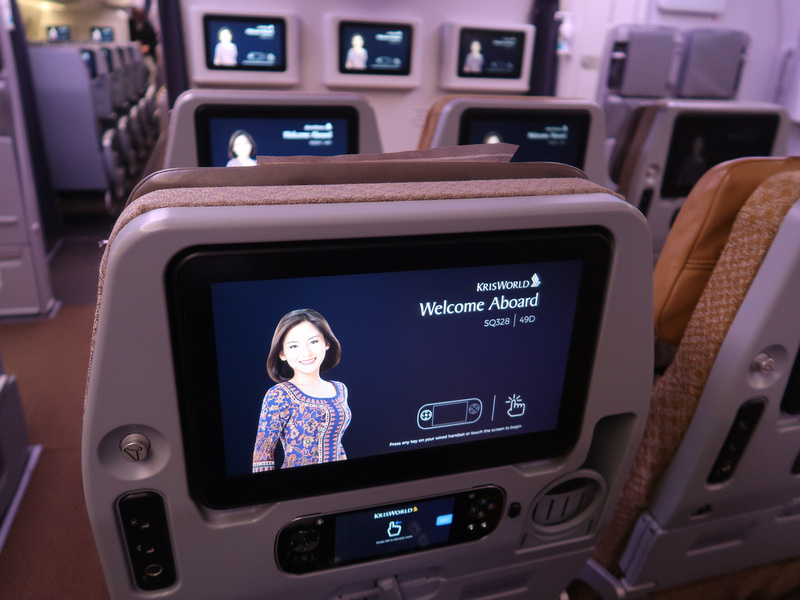 Maybe I slept – I can never tell when I am sitting uncomfortably upright for so long. I envy those around me who can sleep straight through.

Breakfast was a welcome distraction/activity, and once again I was happy with my inflight meal choice of sausages and eggs. 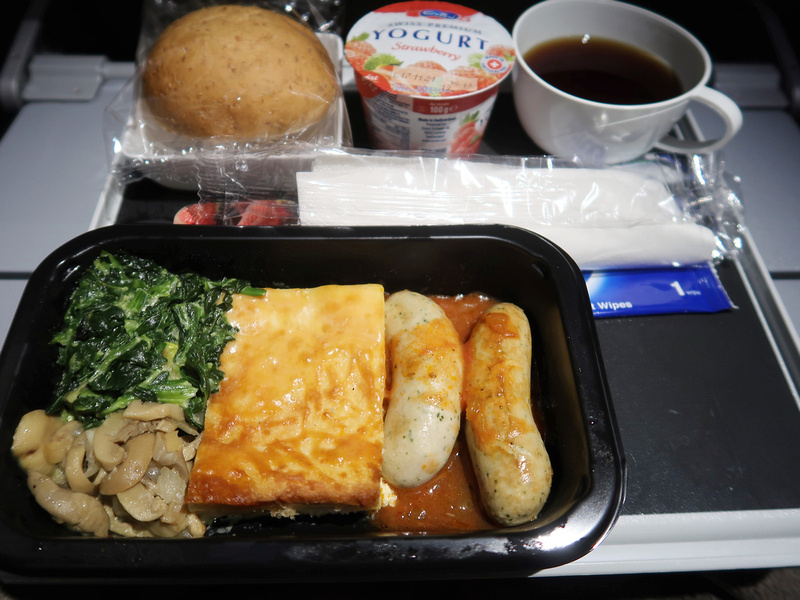 As we started descending into Munich, the airshow was teasing me by showing that we were flying above Zagreb (my next destination). 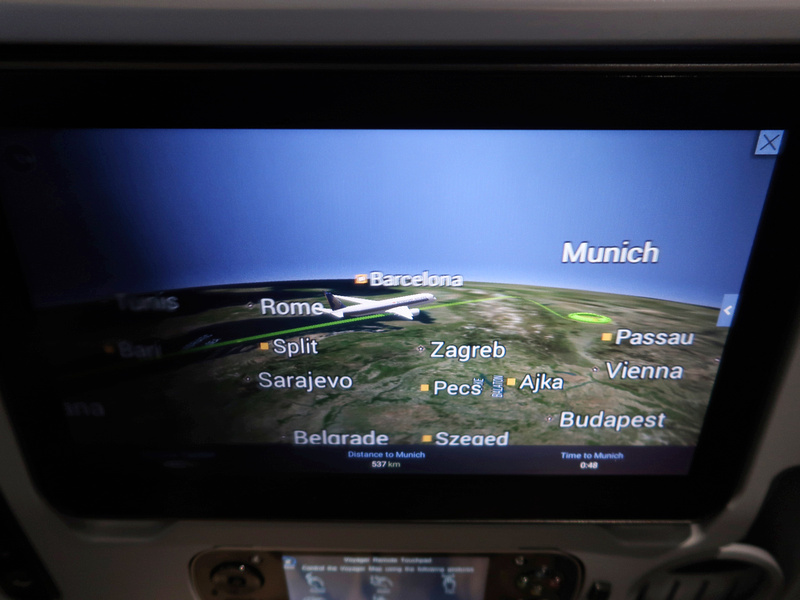 The flight arrived at Munich on time, where I had a connecting flight with Croatia Airlines to Zagreb. One of the reasons I booked this flight was to have flights where my bags were checked through to the final destination. 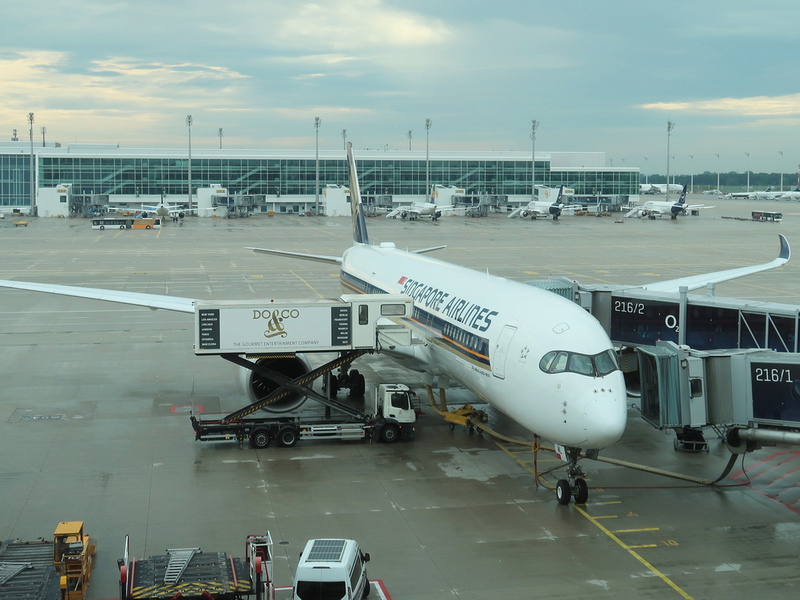 My reintroduction to international flying went as well as I could have hoped for. My biggest concern was having people coughing on the flight, and that didn’t happen. Singapore Airlines continues to be one of my favourite airlines, and I am considering flying with them again to make use of Singapore’s Covid-19 travel lane with Germany when I return.