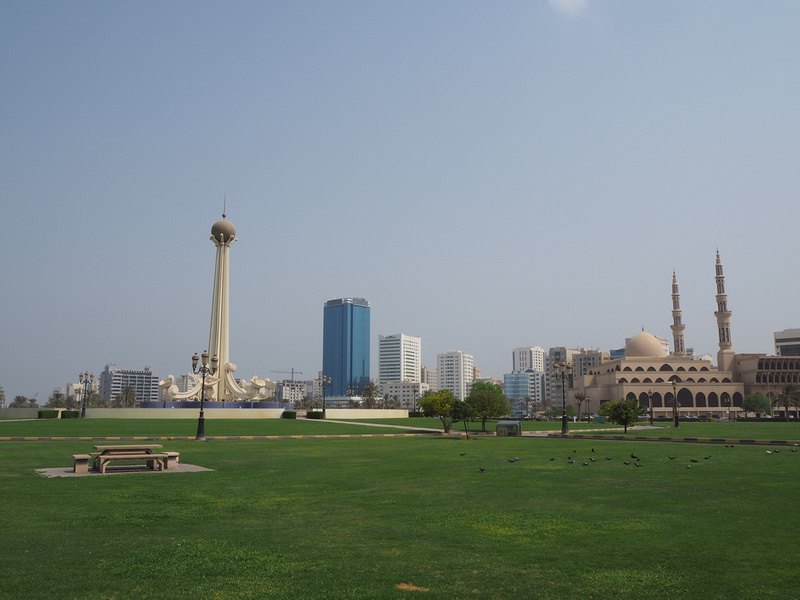 There is a saying that the definition of insanity is doing the same thing over and expecting a different result. I thought about this saying when I found myself back in the United Arab Emirates in the summer, when I said I would never again visit in the summer.

The last I was in the UAE was in 2007 when I had a stopover in Dubai. It was summertime, where daytime temperatures reach the mid 40’s celsius. I didn’t see much as it was too hot to go out, so I made a mental note to not visit at this time of year.

I was back in the UAE because Air Arabia have their largest hub in Sharjah (next to Dubai). They are like the AirAsia of the Middle East, and they are a good option if you need a cheap flight to Dubai. I was flying out of Dubai, but I didn’t want to just fly to Sharjah and not at least have a look around.

I was worried it was going to be too hot to do anything, but I told myself that maybe it wasn’t as bad as I remembered it to be. Plus I grew up in the Australian desert, and I currently live in a tropical city, so I should be able to handle the heat.

On the way to Sharjah I saw this advertisement in the inflight magazine. After experiencing the Sharjah summer I give a hat tip to the Sharjah Tourism Board for such a brazen marketing campaign. 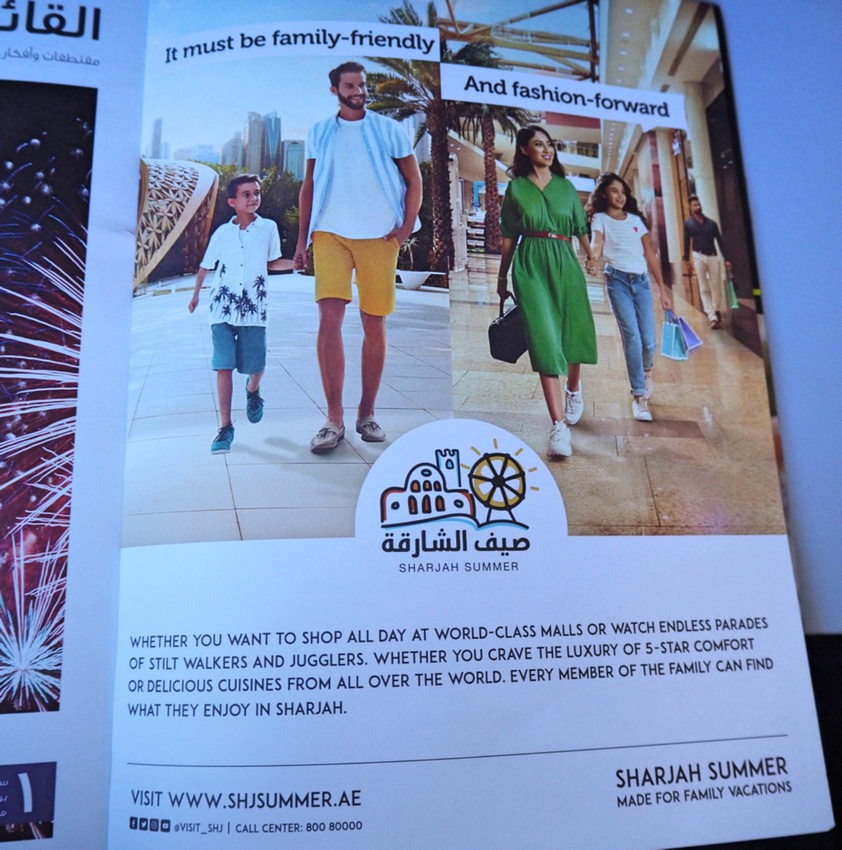 [Come to Sharjah in summer they said, it’s great for family vacations they said.]

When we were approaching Sharjah Airport the captain announced it was 35c, and that was at 9pm. I wasn’t sure if I heard correctly, but sure enough as soon as I stepped out of the airport I was greeted with a baking-hot breeze.

By the time I reached my hotel it was 11pm. Once I got wifi I checked the weather and it was still 35c. 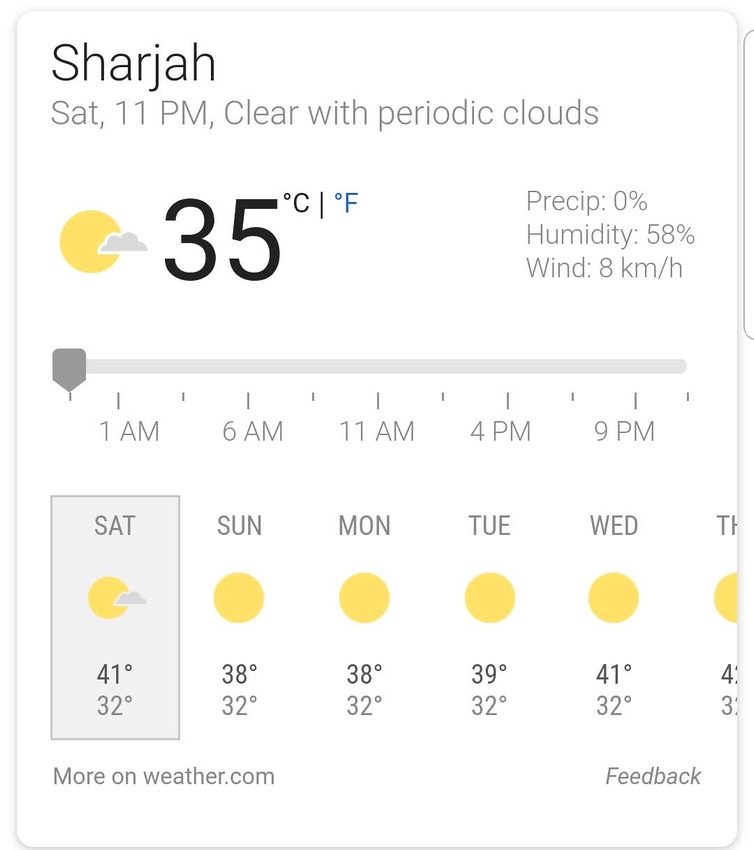 I should have been more organised and got up earlier to go exploring. That would have at least made the day easier.

After a late start my first order of business was to find breakfast. Like in Dubai, Sharjah is powered by the labour of South Asians, so I had a hunch that I would be able to find some cheap Indian restaurants. 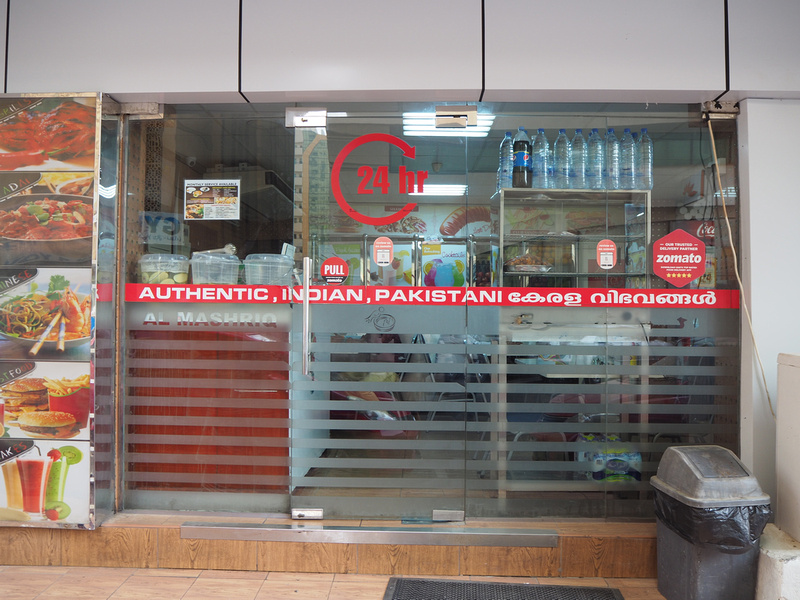 Sure enough there was a 24-hour workers cafe near my hotel. I got a dosa breakfast that was as good as anything you would find in India. 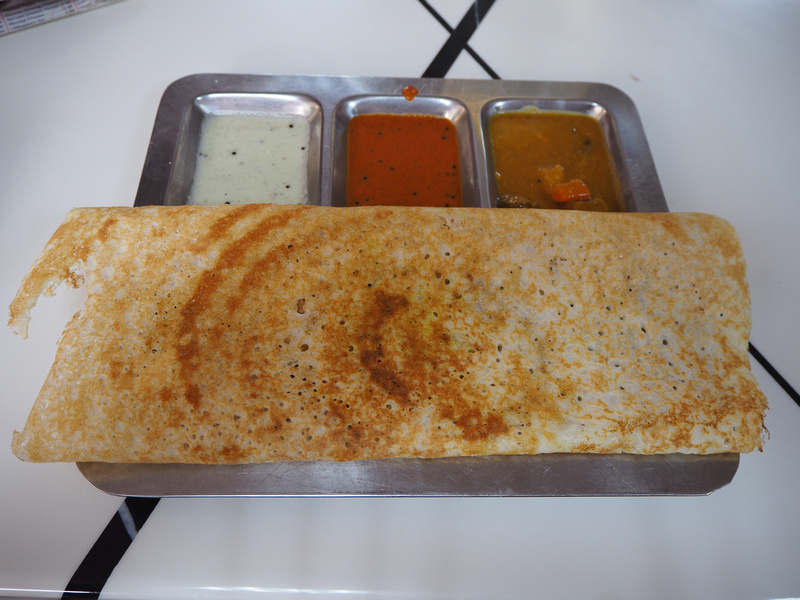 I was only here for half a day so I picked a hotel close to the main sites to make the most of my time. 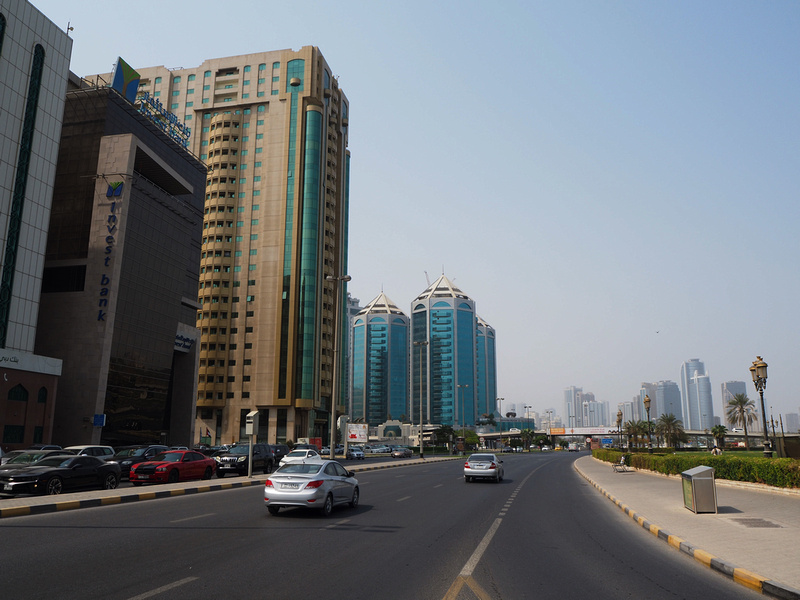 It was about 20 minutes walk to the main park, but I had already broken out into a sweat by the time I got there.

By the time I got to the Central Souq I was already feeling worn out from the heat. 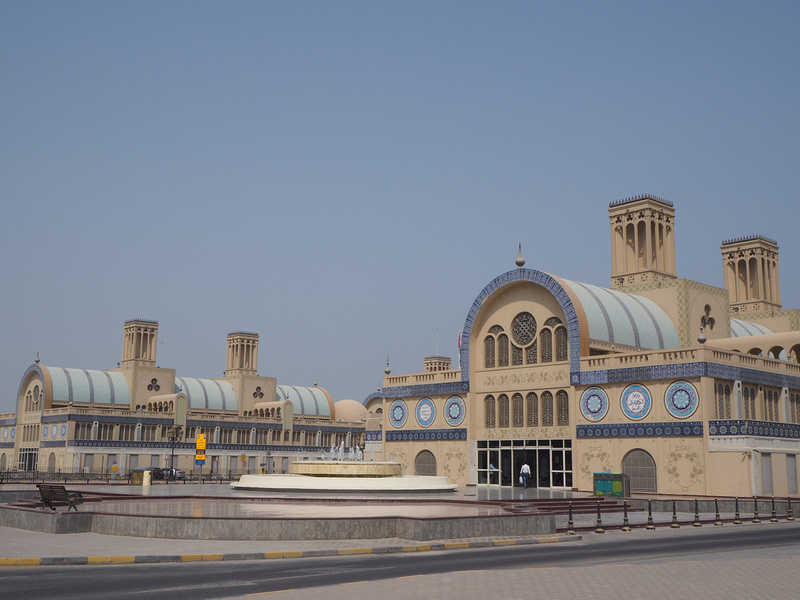 The Central Souq is a modern souq, so it’s all indoors and air-conditioned. It’s like a mall with independent traders, and it’s a sensible design for this part of the world. I took refuge in here, grateful for the air conditioning. 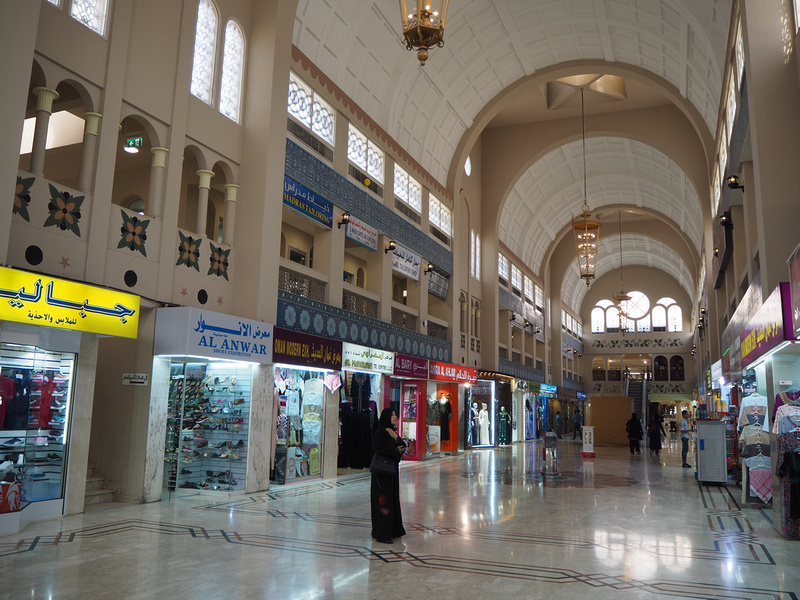 Next to the souq is Khalid Lake. There is a walking path and some architecturally interesting buildings around it. Any other time of year I would have walked a lap of the lake (about 5km in total). Today I wasn’t even going to try. 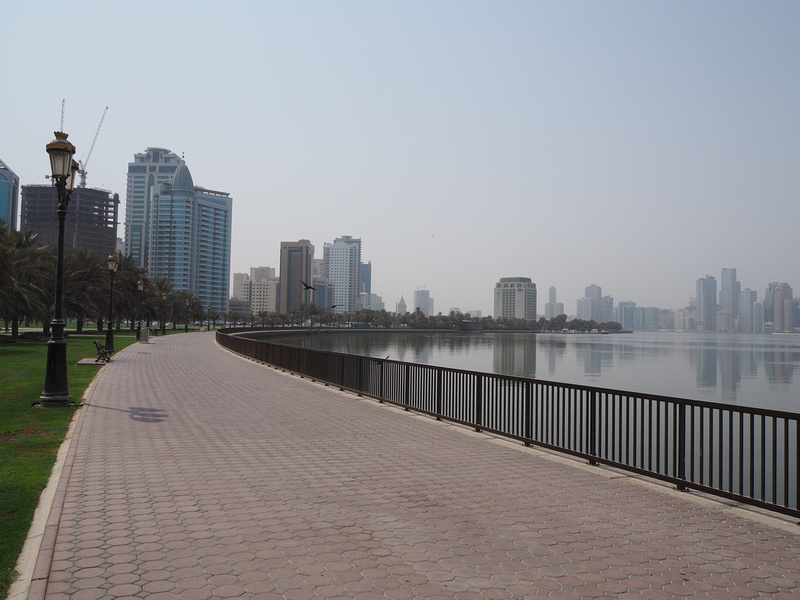 One of those big red tour buses was parked outside the souq, and for the first time in my life I considered taking it. If I had more time in Sharjah this bus would have made sense to take as the attractions are too spread out to walk between. 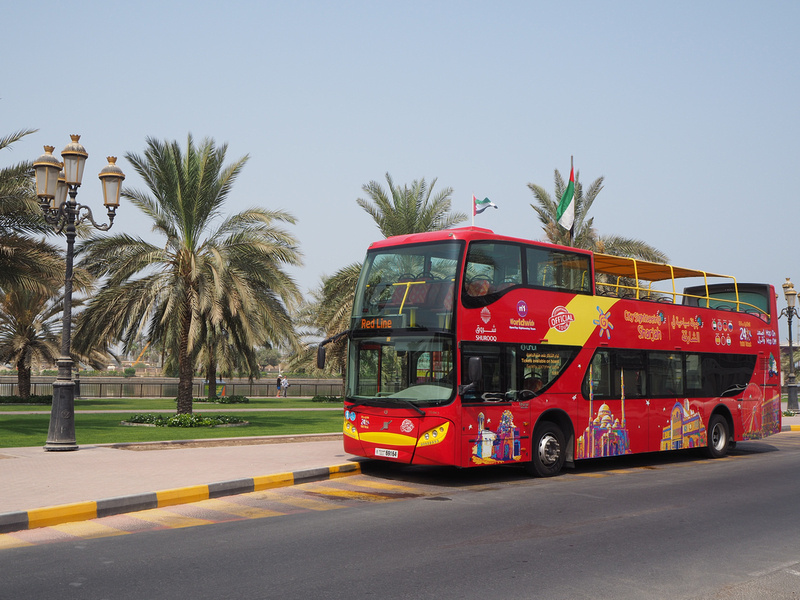 Instead of doing the tour I figured I would go to the old fort then call it a day. That was also about 20 minutes walk away, but it wasn’t getting any cooler. I was seriously tempted to jump under this sprinkler. 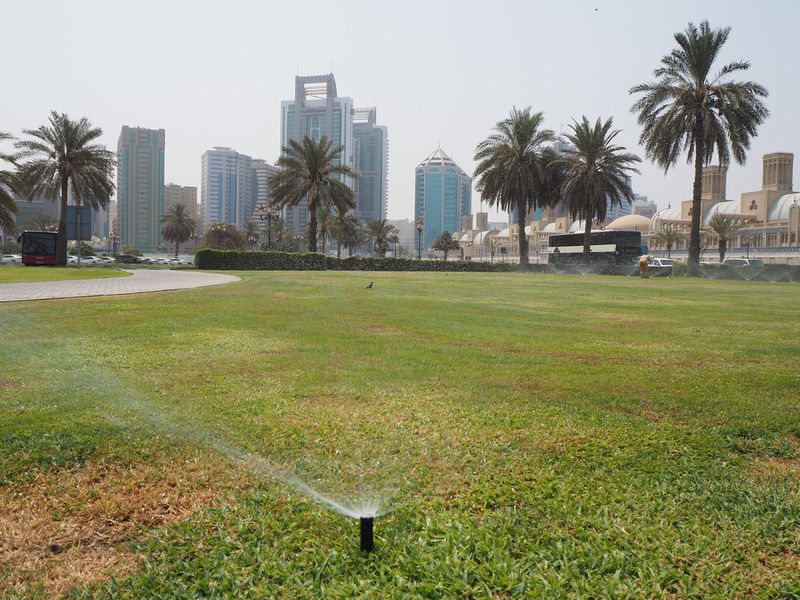 The Heart of Sharjah is the historic part of the city, though much of it has already been lost. The area contains a collection of preserved and restored buildings, alongside new buildings built in the traditional style of the area. 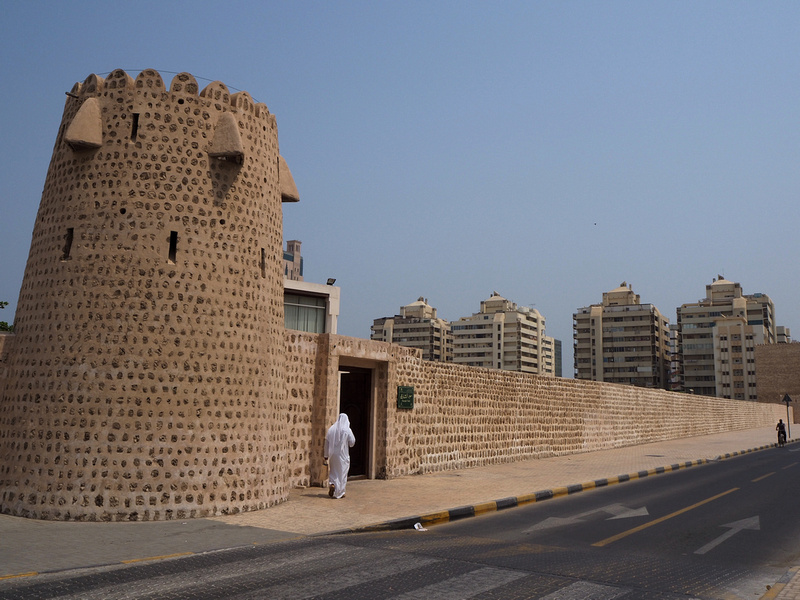 It was too hot to enjoy walking around, and it was no surprise to find I was the only madman outside. Not even a single mad dog or Englishman to be seen. 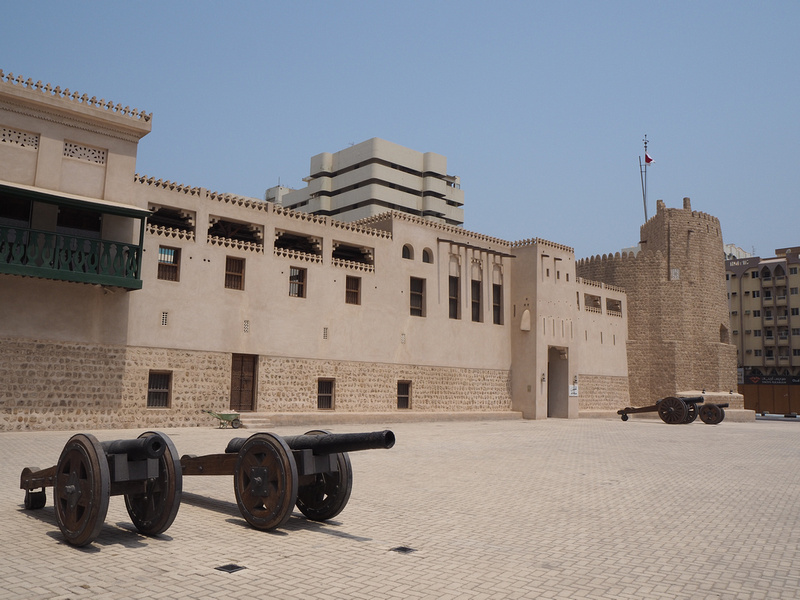 I wasn’t expecting to find a good coffee in the old area, so I was absolutely delighted to find an Aussie-style cafe serving proper flat whites. By now I was really not wanting to go out again. 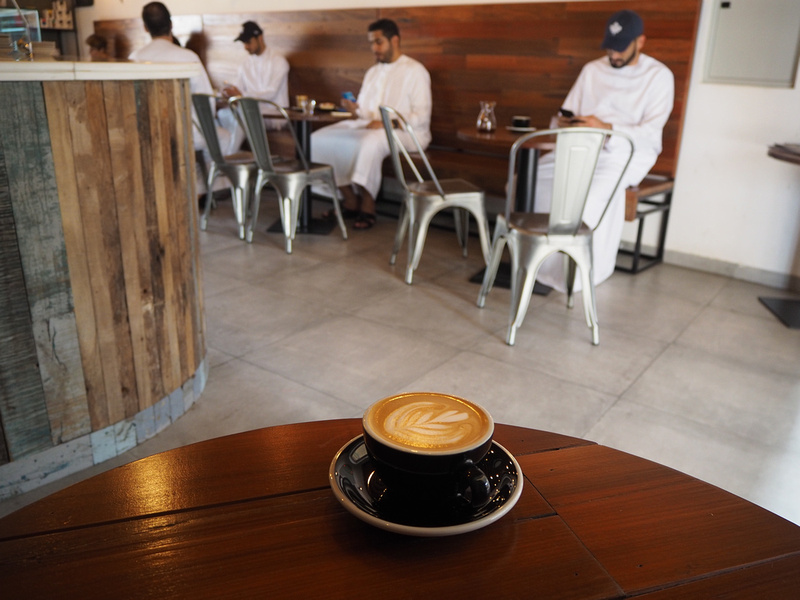 In the older part of Sharjah the architecture is built with shelter from the sun, like the five foot ways of Singapore and Malaysian shophouses. The new buildings offer no such protection. By the time I got back to my hotel I was done. 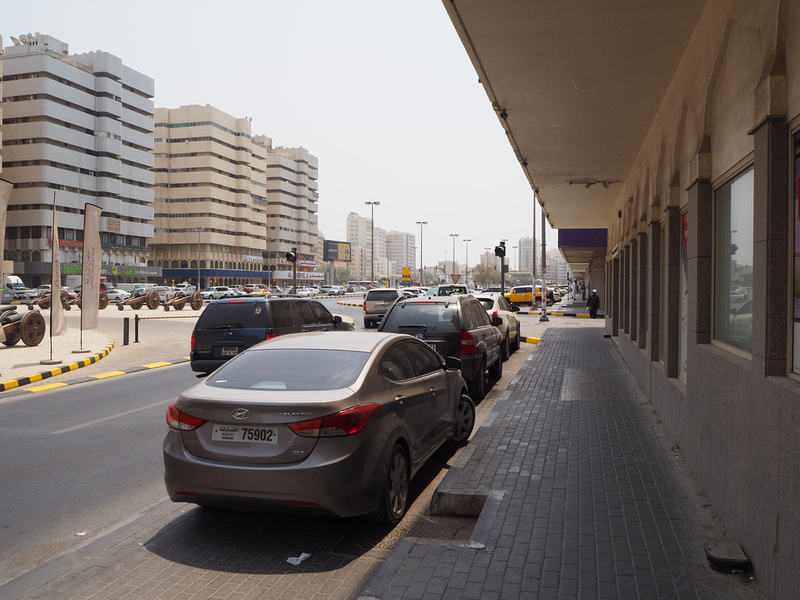 After my mini walking tour I still had to check out and transfer to Dubai. The bus stop for the express Dubai bus was about 10 minutes walk according to Google Maps, and my hotel in Dubai was next to the bus stop in Deira. I had planned this when booking my hotels, and it seemed like such an easy travel day.

In that 10 minute walk to the bus stop I was completely drenched in sweat. I looked like I had just come from a Songkran water festival.

The bus arrived after about 10 minutes. I was too sweaty to take a seat, so I just stood in the bus, still sweating while shivering from the air conditioning. A kind Filipina saw my plight and came over and gave me a handful of tissues. There are Filipinos everywhere here, and pretty much everyone I spoke to in Sharjah were from the Philippines. 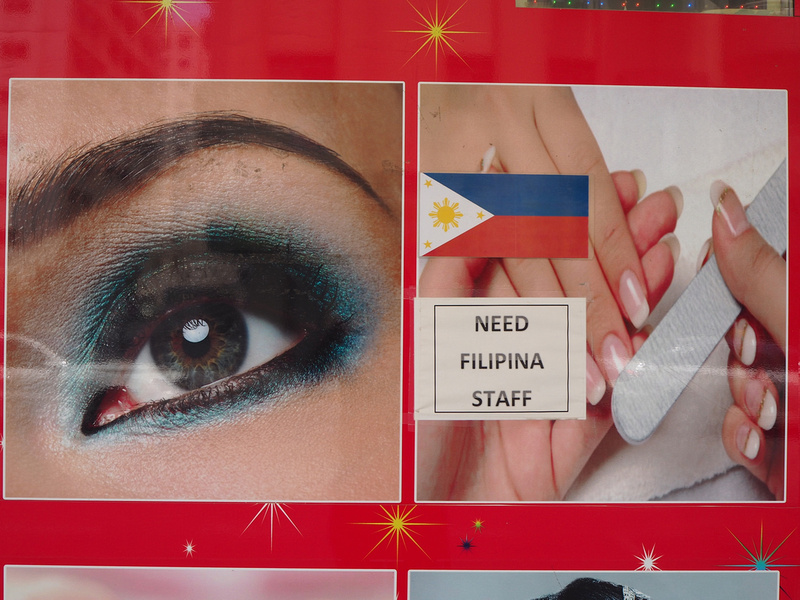 By the time the bus arrived in Dubai I was still sweating. I got to my hotel and took a cold shower to bring my core body temperature down. I had to Google to make sure I wasn’t having a heat stroke. I didn’t have any of the symptoms, but I made a note to myself to not be wandering around in the midday summer sun in the UAE ever again.

I wouldn’t be surprised if I ended up in Sharjah again on a cheap Air Arabia flight, but I will make sure I’m back during the cooler months.