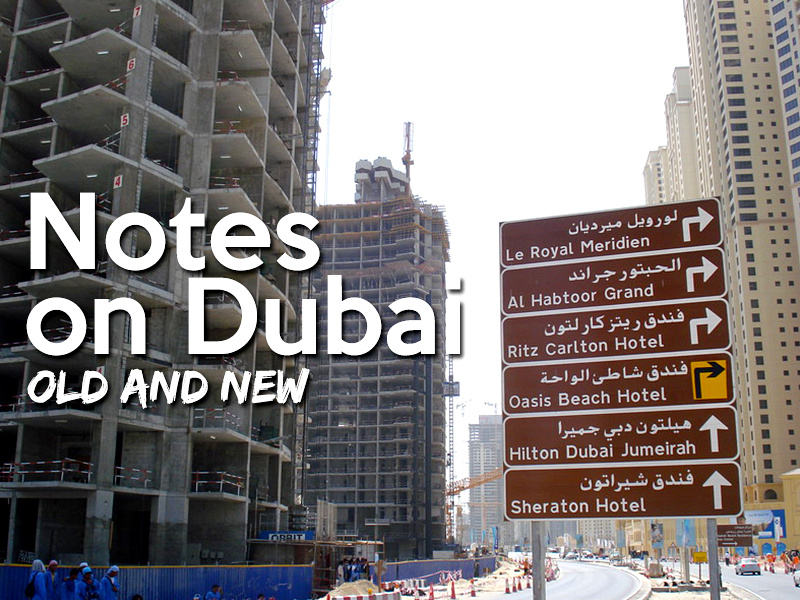 Notes from my trip to Dubai in October 2007.

…is hot. Damn hot! At the end of September the forecast maximum is 40 deg C and a minimum of 29 deg C. Step out of the air conditioned comfort of the airport and it hits you in the face and fills your lungs. And this is at 6 in the morning.

For 4 months of the year Dubai gets to over 40 degrees Celsius every day. The rest of the year is in the more liveable 30’s and in the “winter” months down to the very comfortable 20’s. 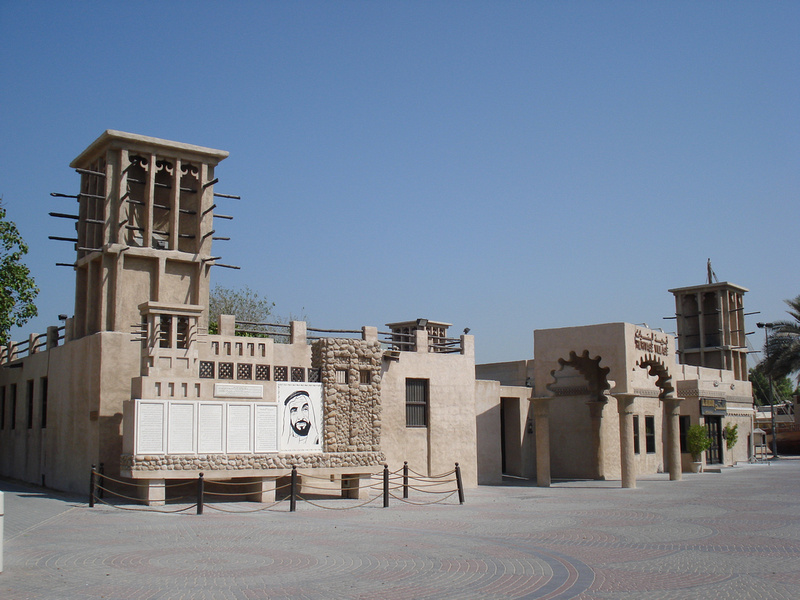 [Heritage Village, Dubai: You’ll only find crazy Australians on the street in the middle of the day]

The old part of Dubai is centred around Dubai Creek, an inlet of water from the Gulf which served as Dubai’s original port, and still handles small cargo vessels today. Old Dubai consists of Deira on the north side of the creek and Bur-Dubai to the south. 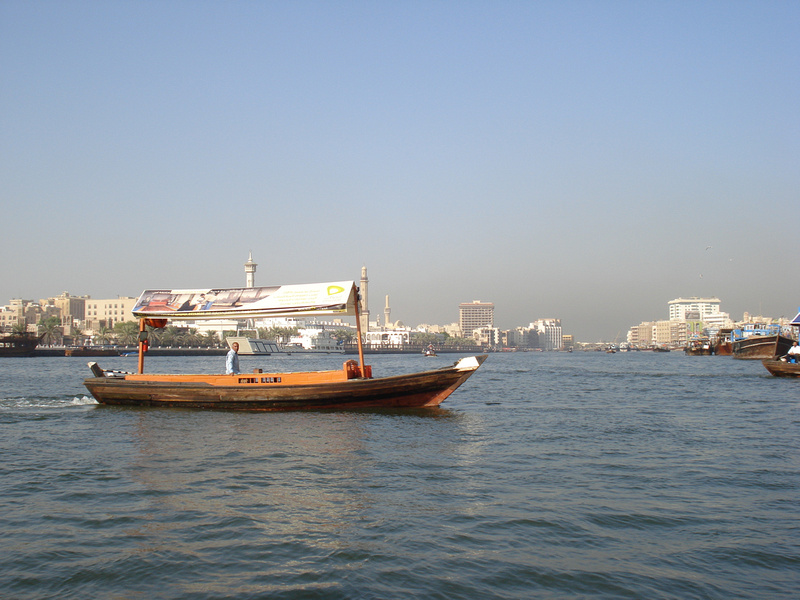 The area around the creek is where the older and more interesting streets of Dubai lay. Here you will find old and reconstructed market laneways (souqs) on either side of the creek. 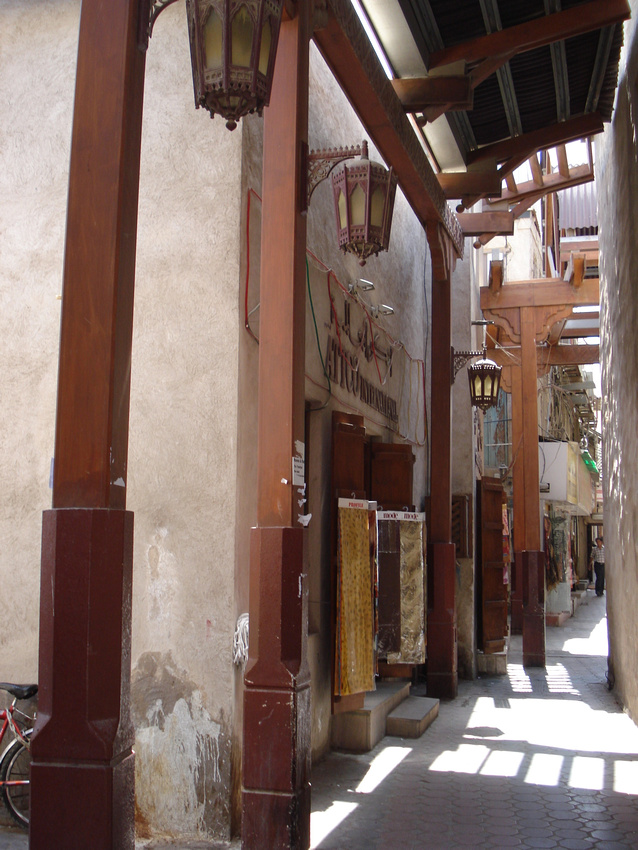 If you are staying in the creek area of Dubai you could be forgiven for wondering what all the noise is about regarding Dubai. The old part of town is an interesting if architecturally unremarkable place, and there are not many high rise buildings in the area. Old Dubai looks like what an Indian city would look like if it had no rubbish and livestock on the streets and if the roads were all sealed. That Dubai is 60% populated by Indians probably contributed to my illusion. 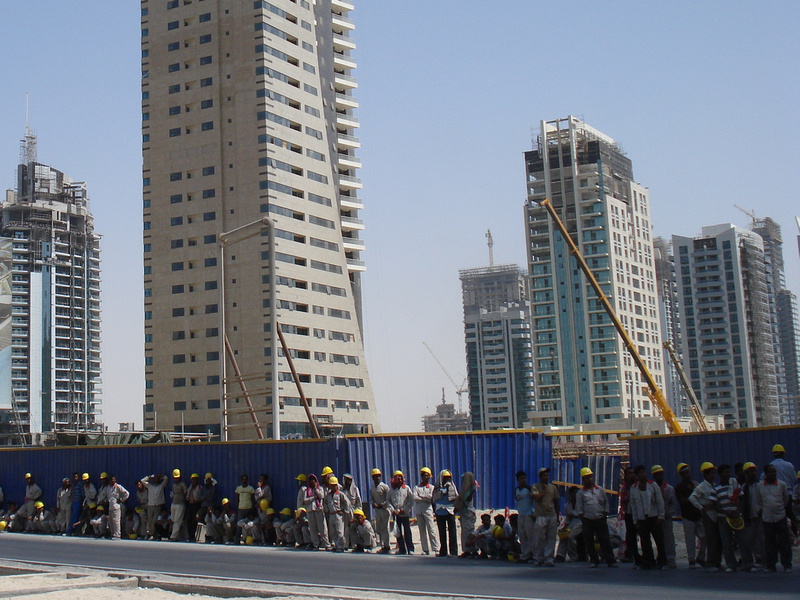 It is not until you get out of the old town and drive along the coast that you start to see the jaw dropping expansion of greater Dubai. The Emirate of Dubai has lofty ambitions of become one of the great global cities of the world so there are construction sites on steroids all over the place. 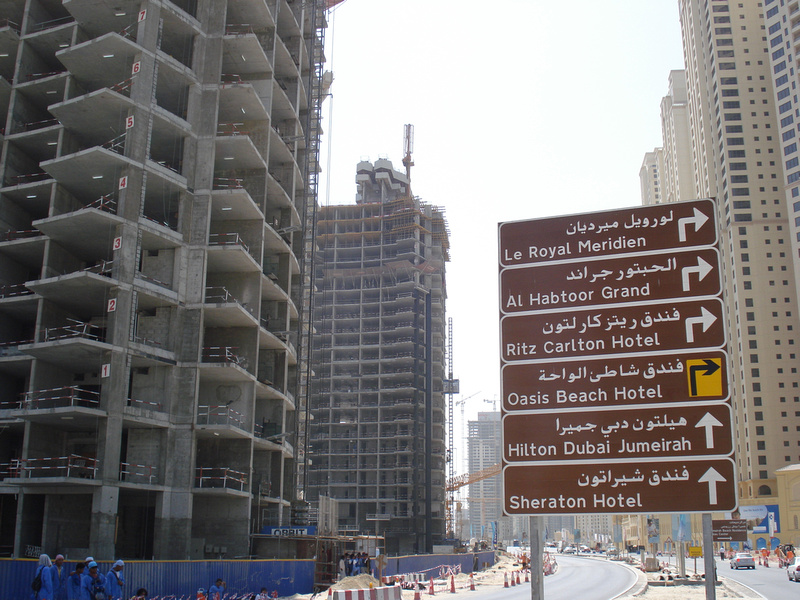 [A canyon of construction at Dubai Marina]

It sounds crazy, but then this is Dubai. The Dubai bus shelter project is billed as the first ever air conditioned bus shelters in the world on such a large scale. There will be 500 of these built eventually. 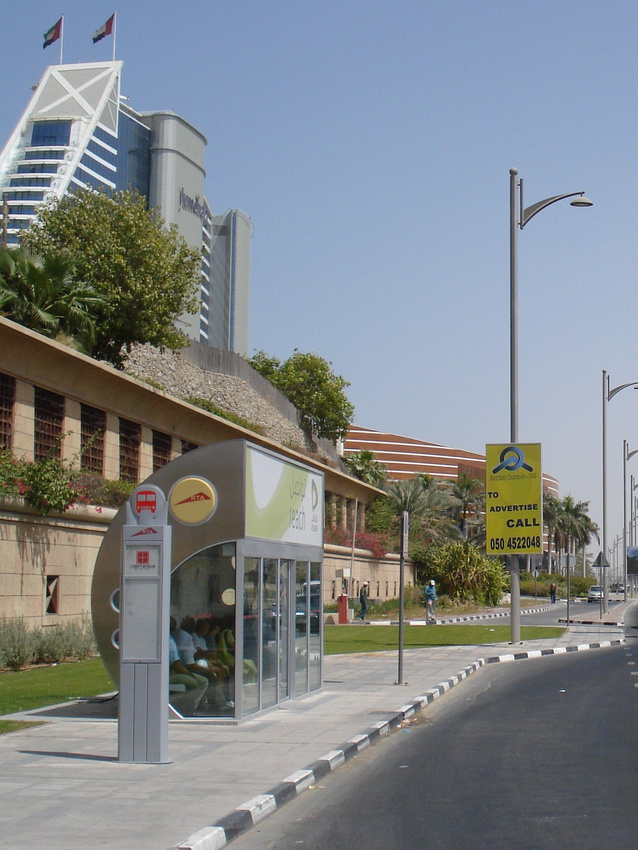 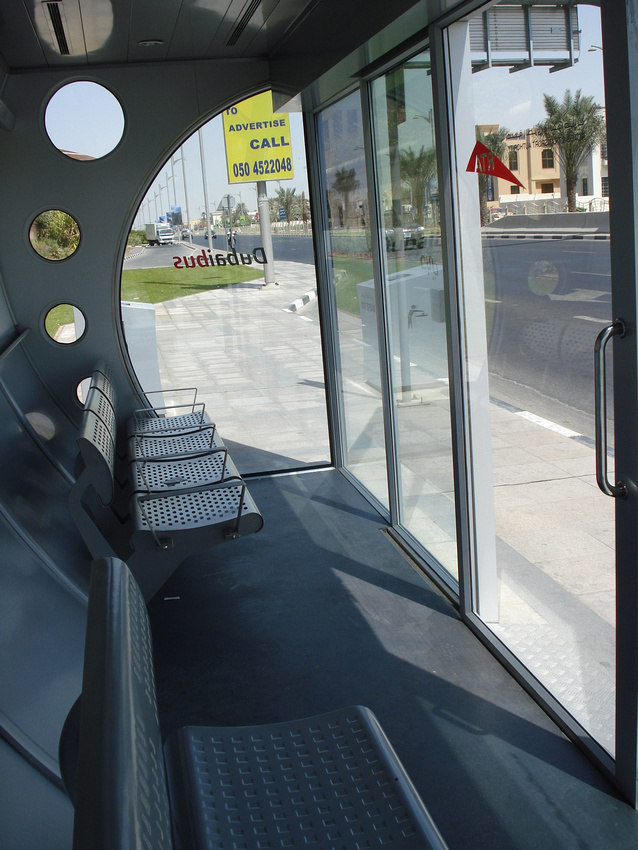 Arrow to Mecca in hotel rooms 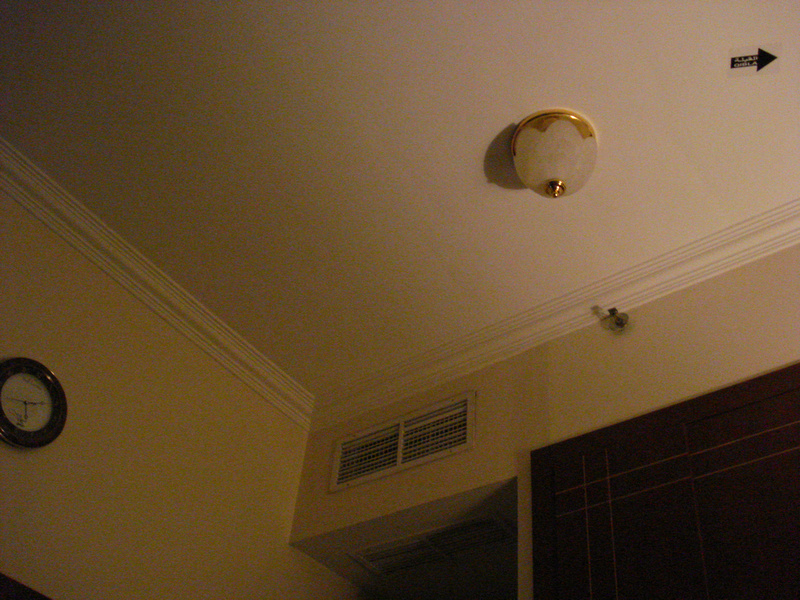 [Black arrow on the hotel ceiling indicating the direction to Mecca.]

My hotel room has a black arrow on the ceiling pointing in the direction to Mecca, a common feature of hotels in Islamic countries.

As Arabian as date pie 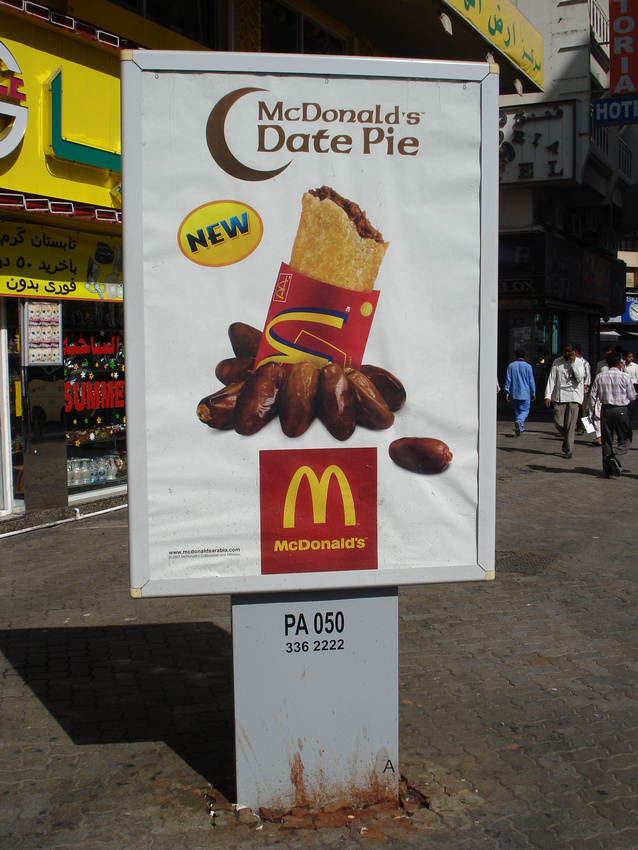 What a difference a tree makes in a baking-hot city of concrete. With all the money that is pouring into Dubai to make it one of the premier global cities of the world, they should start planting shady trees everywhere to make a more pleasant place. 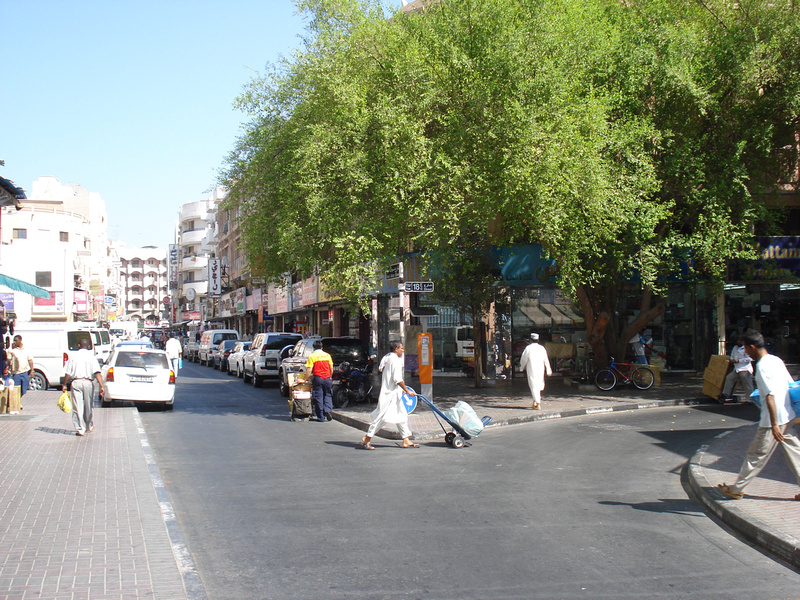 [A shady tree in Deira – Dubai]

A good example of a green city in a hot and dry climate is Madrid. The Spanish capital in the middle of the Iberian Peninsula is one of the greenest cities in Europe. The shady elm trees make the summer days bearable.

Trees For Cities is a site about beautifying our cities through tree planting.

Having greenery is one thing, but it needs to be usable as well. I found this park near the creek only to find that you can’t use it. 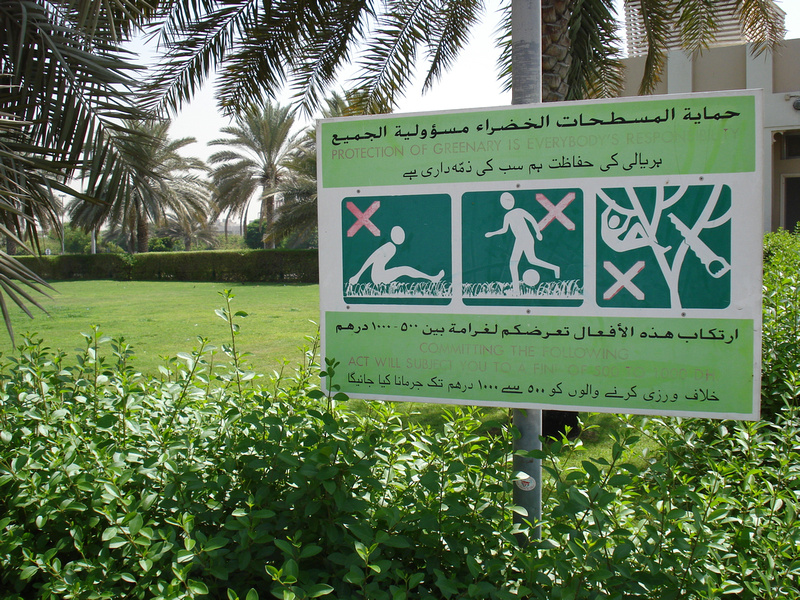