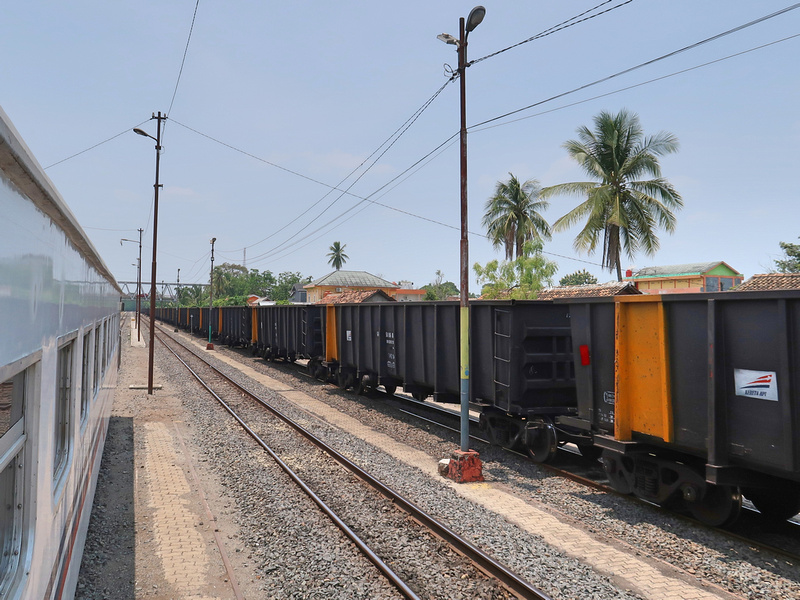 Sumatra is the sixth-largest island in the world with a population of over 50 million people, yet there are only a few railway lines on the island. There are plans to unite the current lines to form a trans-Sumatran railway that would travel from Medan to Bandar Lampung.

This is a distance of over 1750 kilometres, so building such a railway will need to be done in stages. The good news is that a section of this future trans-island railway is now operating in South Sumatra between Palembang and Bandar Lampung.

As part of my Future Southeast Asia Railways series I’ve been following new railway developments across the region. Indonesia has published some ambitious proposals to build railways on their biggest islands, though many of the new lines will primarily be for mining.

In the case of the South Sumatra railway, Palembang and Bandar Lampung are two major coal ports, and the railway has been built to extract coal from one of the biggest coal mining regions in the world. The passenger service runs between the two southern provinces of South Sumatra and Lampung on the railways that coal mining built.

Here is my review of the train from Palembang and Bandar Lampung.

I was on a tight schedule so I didn’t want to risk not getting a ticket on my day of travel. There are two trains a day that travel this route. There is an overnight sleeper train, but I wanted to see the countryside so I went for the day train. 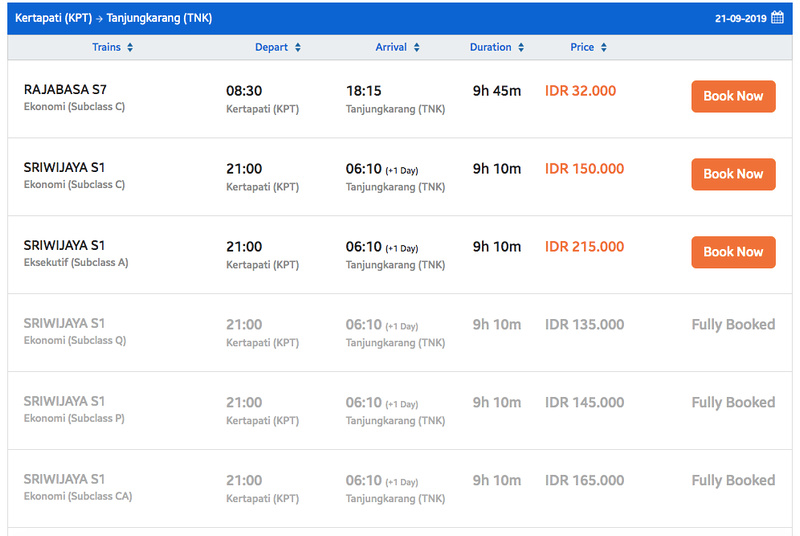 I booked my ticket at tiket.com, which is easier to use than the railway website. When making a booking the stations to search are Kertapati for Palembang, and Tanjung Karang for Bandar Lampung.

The ticket was on sale a month in advance, and when I booked the price was 39,500 IDR ($2.80 USD) for the 9 hours 45-minute journey. I thought it must have been a mistake, or maybe I was converting the currency wrong. But no, this was the actual price.

It turns out that the passenger railway service is subsidised by the government, and as I was to later see, this railway is primarily built for the hauling of coal. 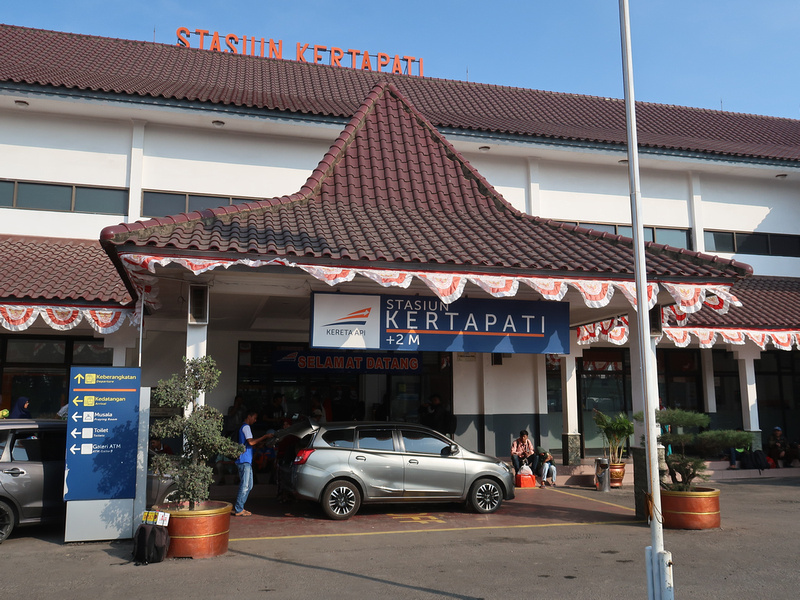 I started my trip in Palembang, which is worthy of exploration before taking the train. The station at Palembang is named Kertapati, and it’s in the suburbs across two rivers from the city centre. If they ever get round to building a trans-Sumatran railway I don’t know how they will extend this railway, as it ends at a river junction in a built-up area. 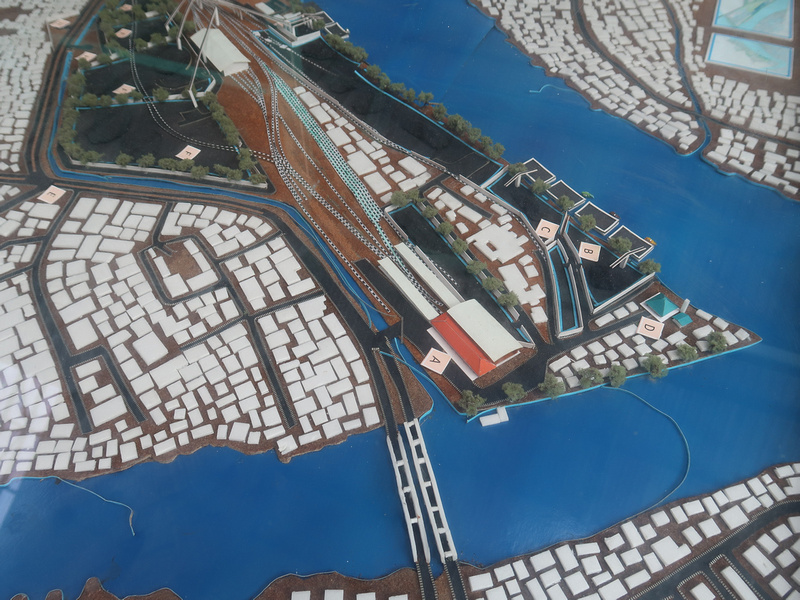 [Model of Kertapati station at the river junction.]

The station is at a river junction because it’s next to a port. Coal that is transported to the station is then offloaded onto river barges to be taken to the seaport. 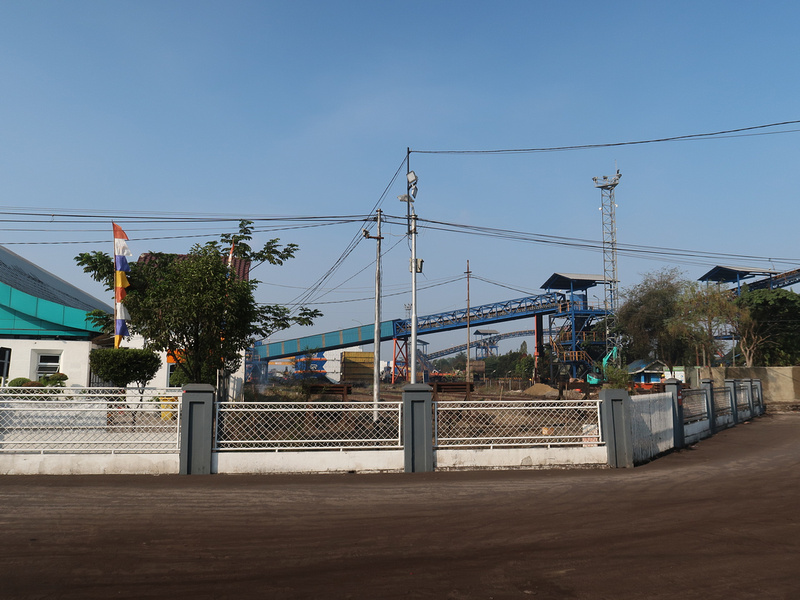 There is a light rail line in Palembang, though it doesn’t go anywhere near the station so I got a Grab taxi. You need to check-in at the station so allow some time for that. 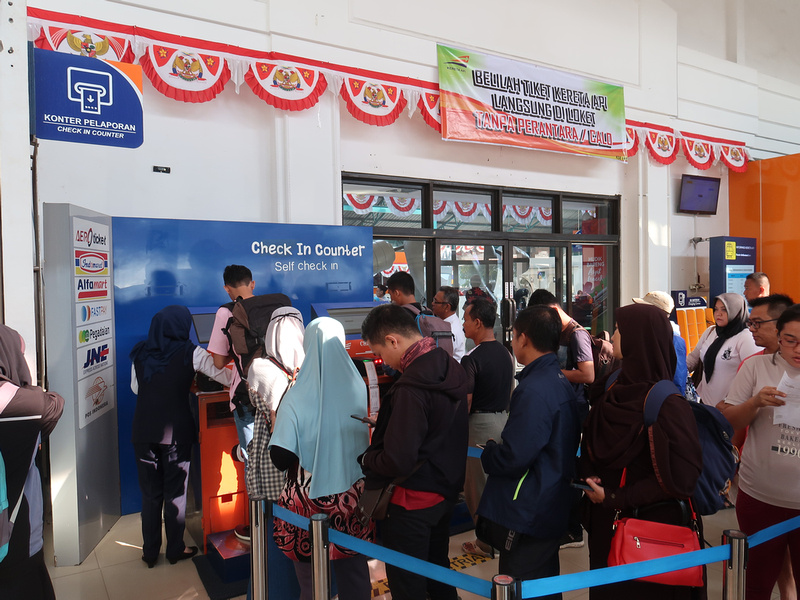 Bring your own supplies before you arrive as there are only a few snack shops at the station and nothing nearby. 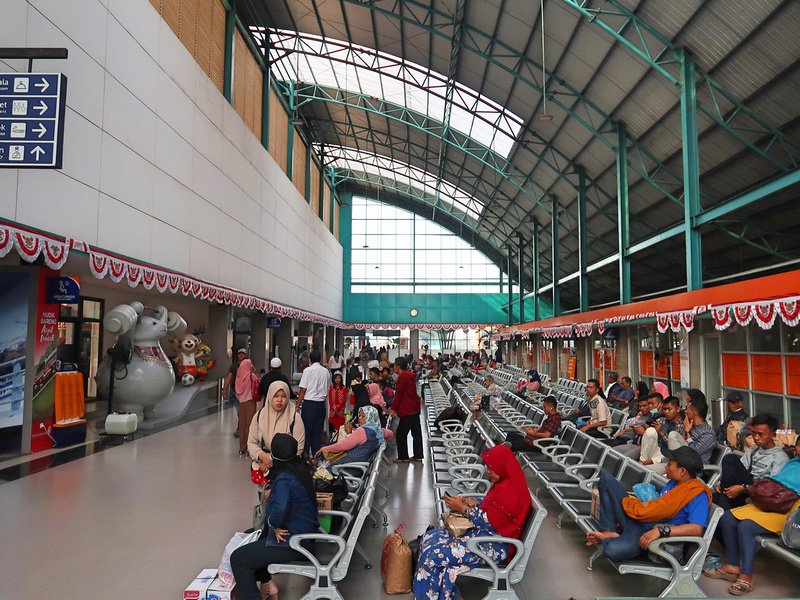 The gates are open about 30 minutes before the train departs so you will have time for photos. 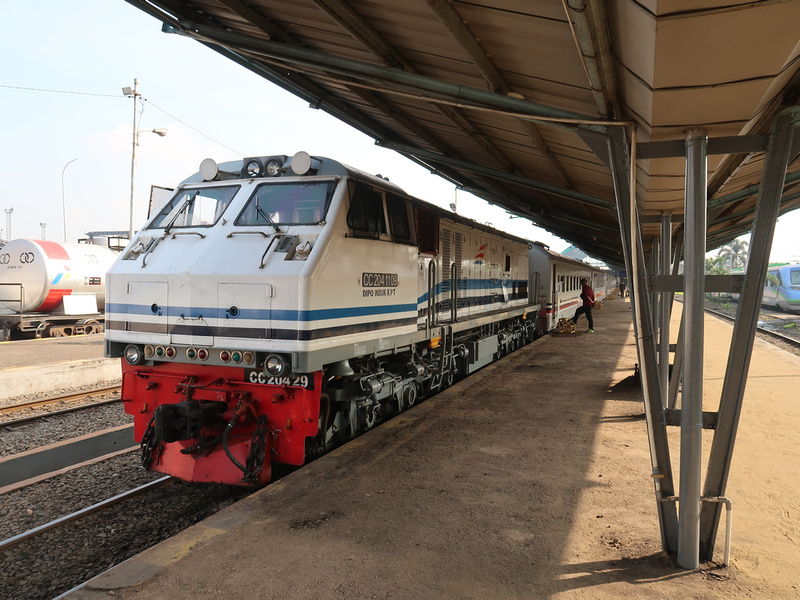 The destination is Tanjung Karang (the station name for Bandar Lampung), 387 KM from Kertapati. 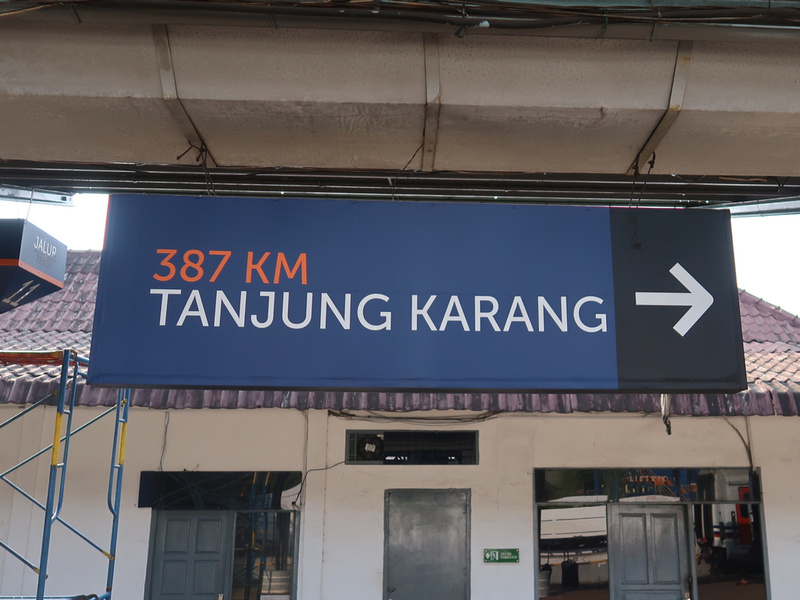 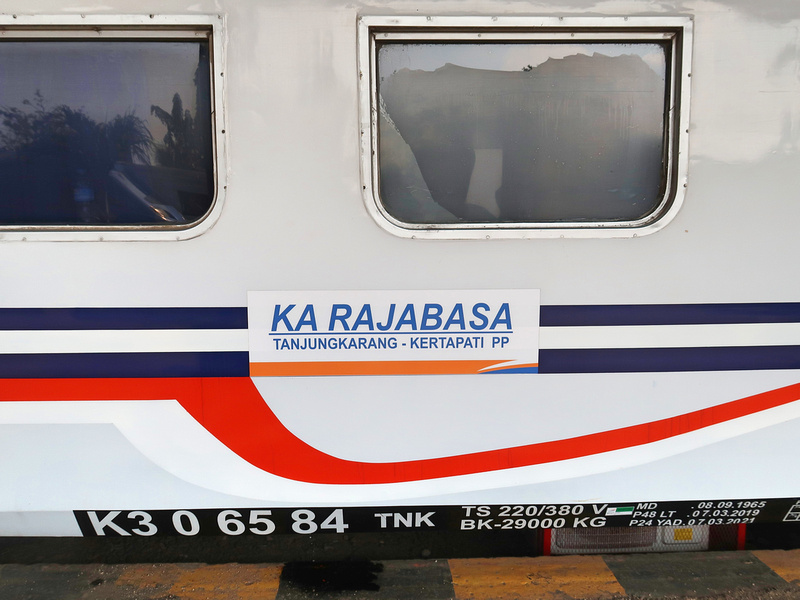 When I reserved my ticket the online booking site showed the seats in a 3×2 configuration. One of the reasons I like rail travel is that there isn’t usually a middle seat. There are 3×2 seats in Japan, but the seats are wide enough and there is enough legroom so you can get out with minimal annoyance to your seatmates. 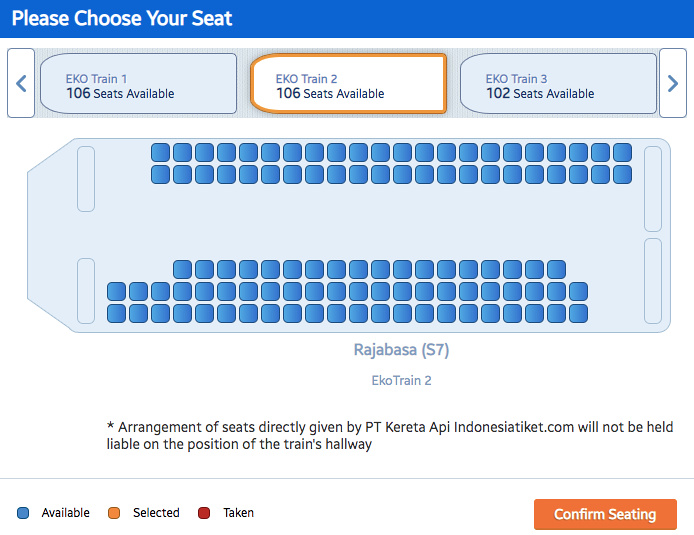 I was dismayed to see that not only were the seats bench-style, but they are also facing each other. The train was full, so there was no chance of having a spare seat next to me. 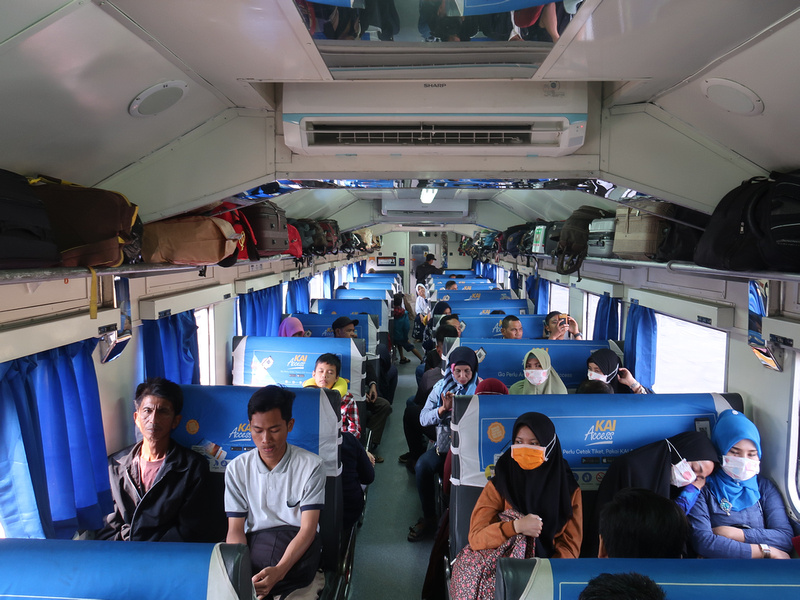 Being a bench seat the back doesn’t recline, and the seats are so close to each other that it’s a knee-to-knee experience with your fellow travellers. 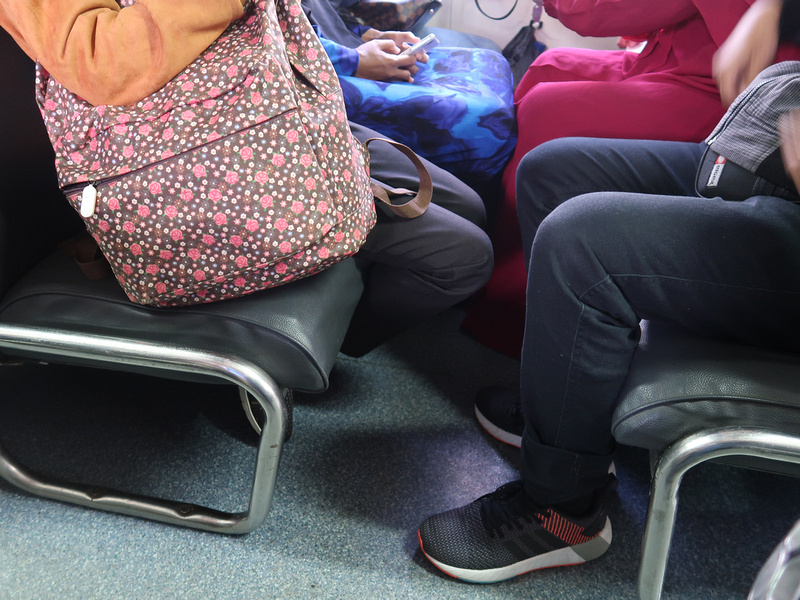 On the plus side, the seats were padded, and the carriages were air-conditioned at a comfortably cool level.

There are snack vendors onboard who go through selling drinks and snacks. I also went up to see the dining carriage. Here you can get instant noodles and coffee, and its also a good opportunity to have a break from sitting in the seats. 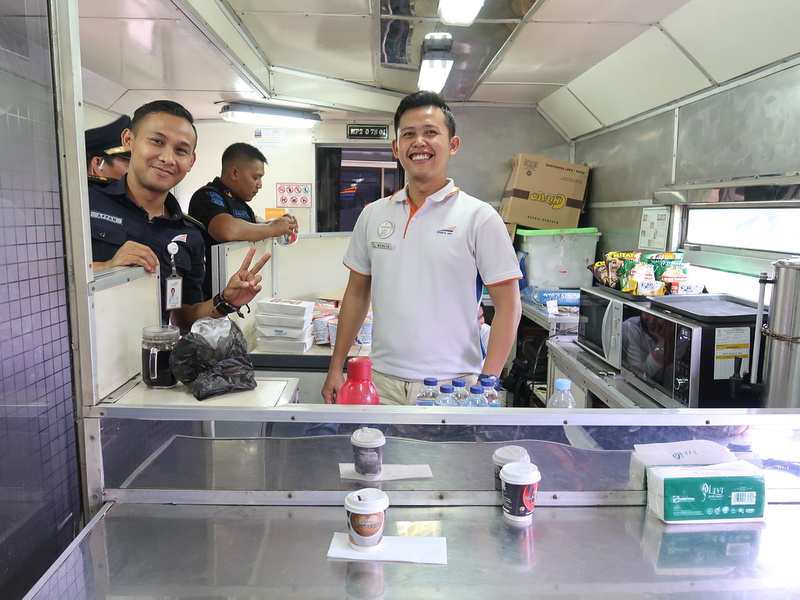 A vendor comes through selling lunch packs, so I got one of those. 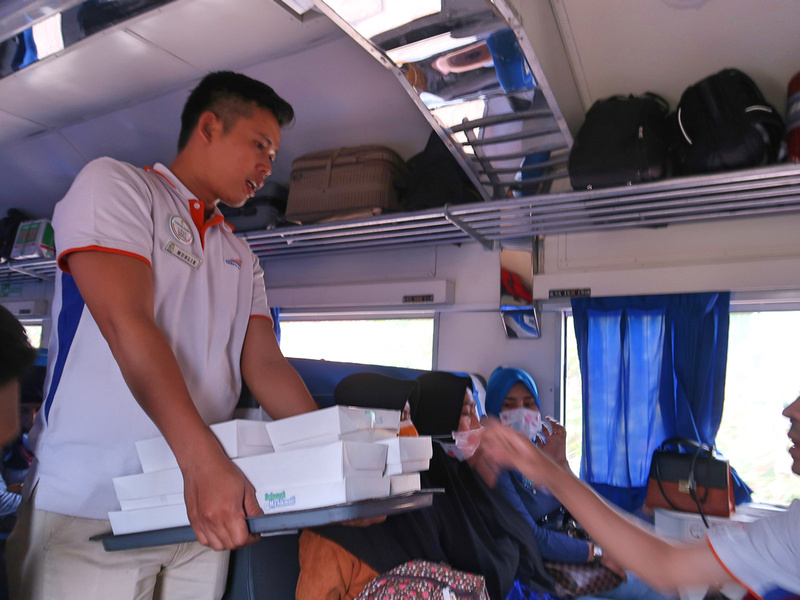 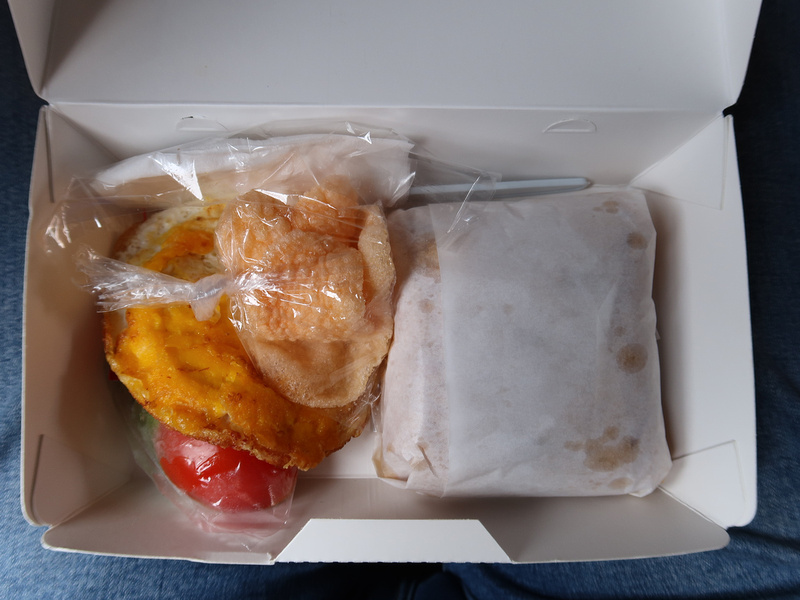 Good to see that snakes are banned.

There are toilets onboard, but unlike Malaysian Railways with its option of sitting or squatting toilets here there is only squat toilets. It was in terrible shape by the end of the trip. 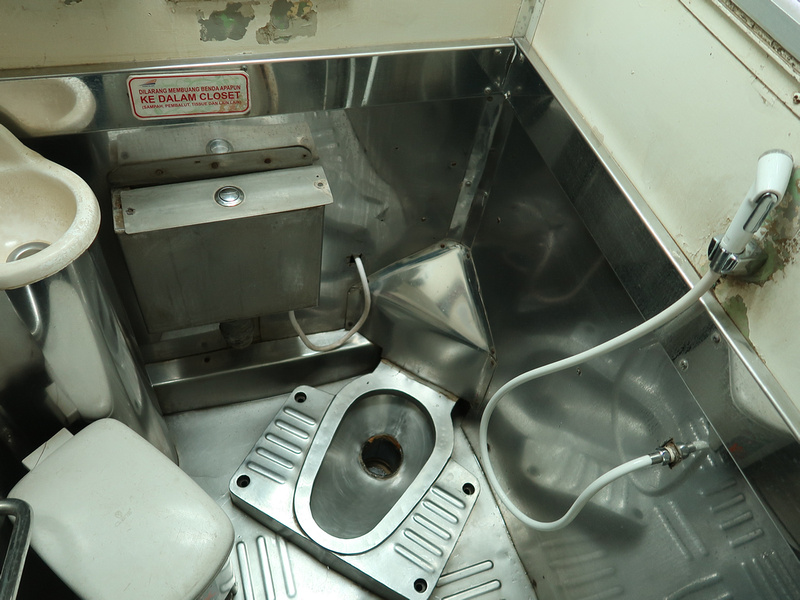 The train stops along the way at stations of varying sizes. Some stops were long enough for passengers to get off for a smoke break. 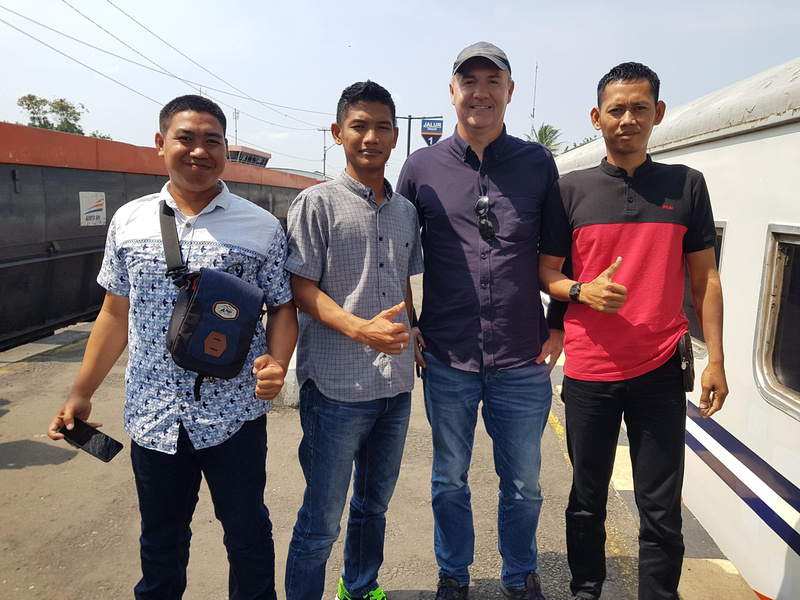 At Kotabumi station we passed the only other passenger train that operates on this route. The Way Umpu service is a commuter train that runs between Kotabumi and Bandar Lampung. 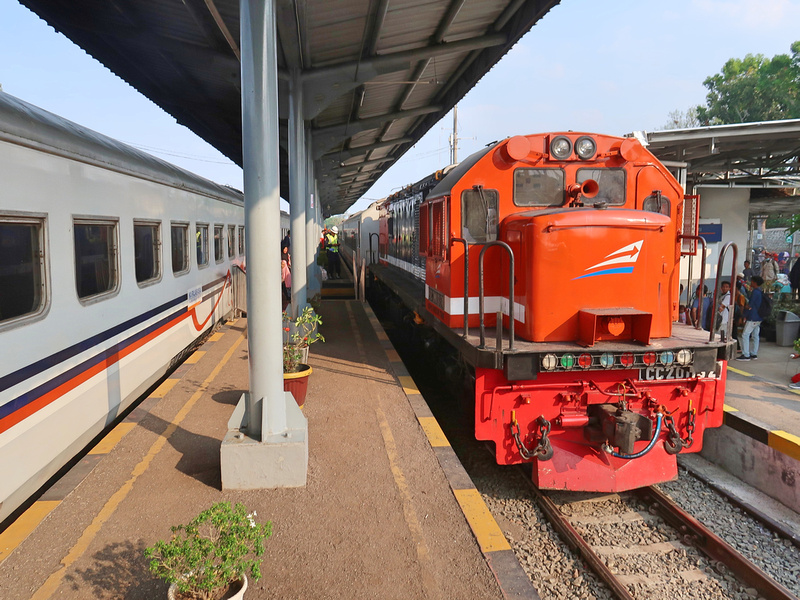 To my surprise, the train arrived at Tanjung Karang five minutes early, and by then I had enough of sitting on that bench seat. 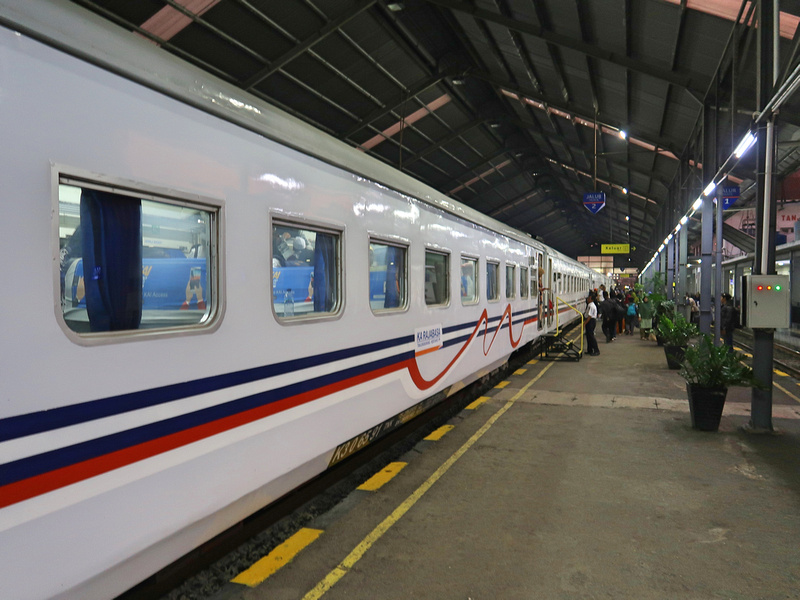 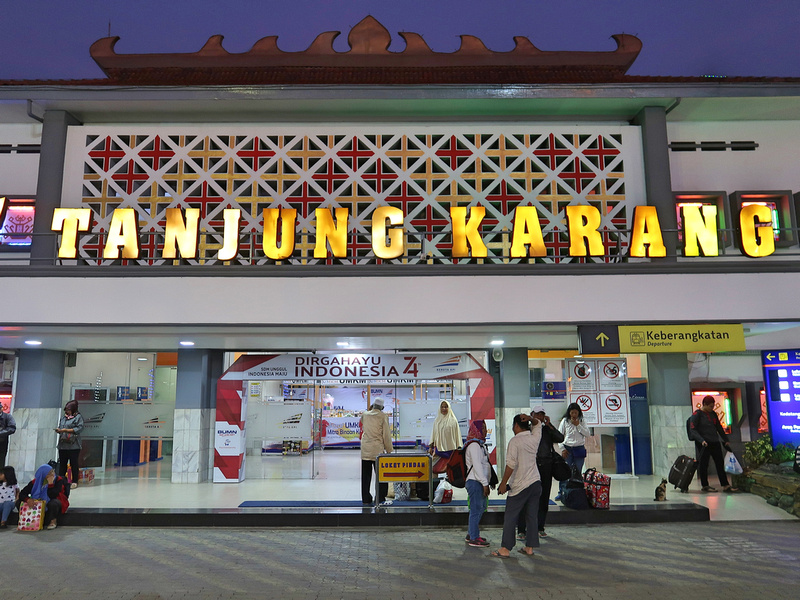 Scenery on the coal railway of South Sumatra

When the name Sumatra is mentioned one might think of tropical jungles, volcanos, and Sumatran tigers. The reality on the ground though is much different (at least in South Sumatra), where you’re more likely to see endless rows of palm oil plantations. 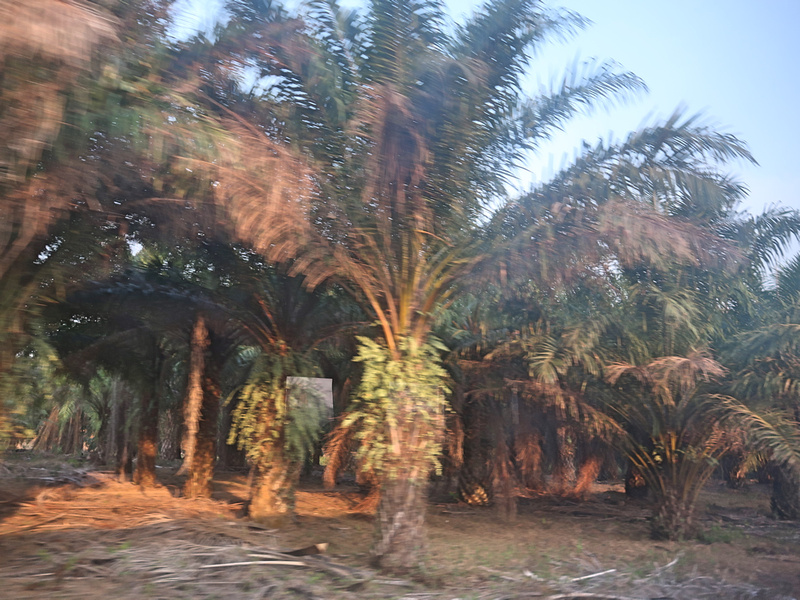 That’s not to say that there aren’t jungles and mountain streams to see, but you are better off going there by another means rather than expecting to have that as the scenery on this particular route. 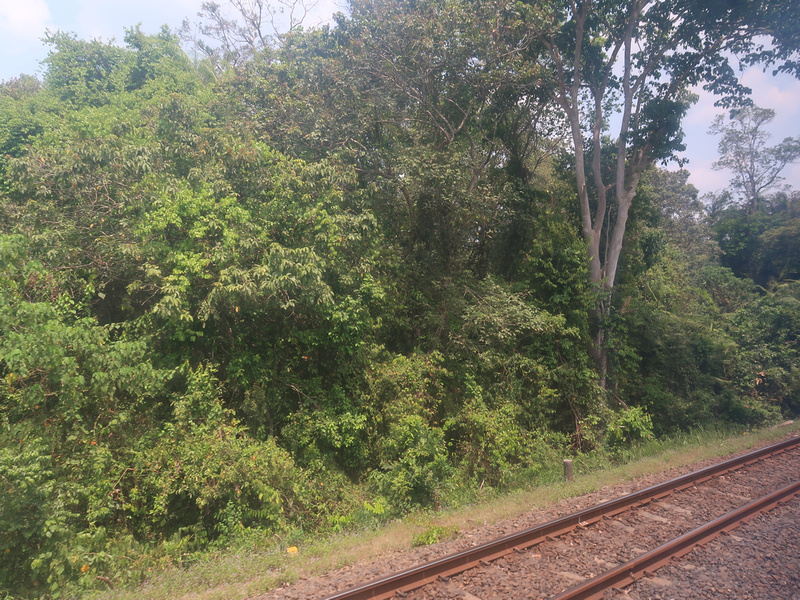 There are sections that offer glimpses of jungle rivers and wild forests. 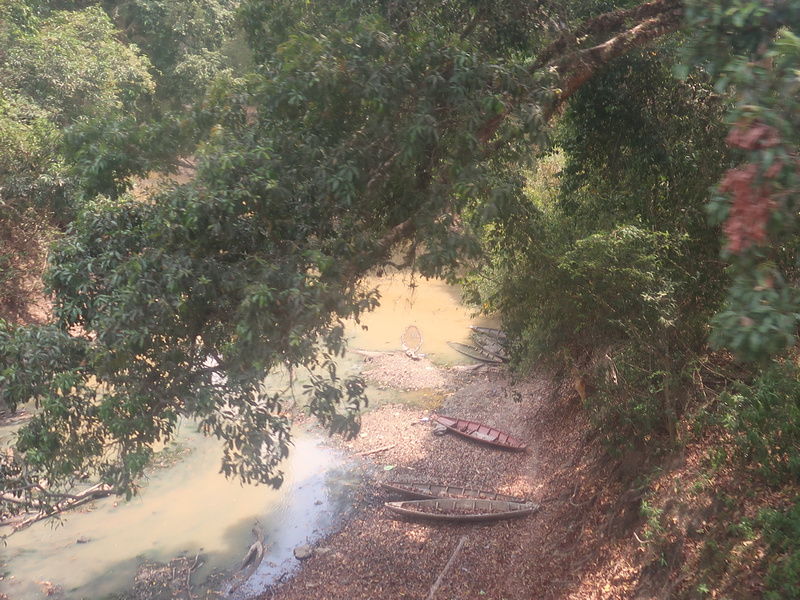 For the most part, it is agricultural land. Where there once was jungle there is now land being prepared for more palm oil plantations. The journey reminded me of the Jungle Railway in Malaysia, where the jungle is being eaten away at either end by plantations. 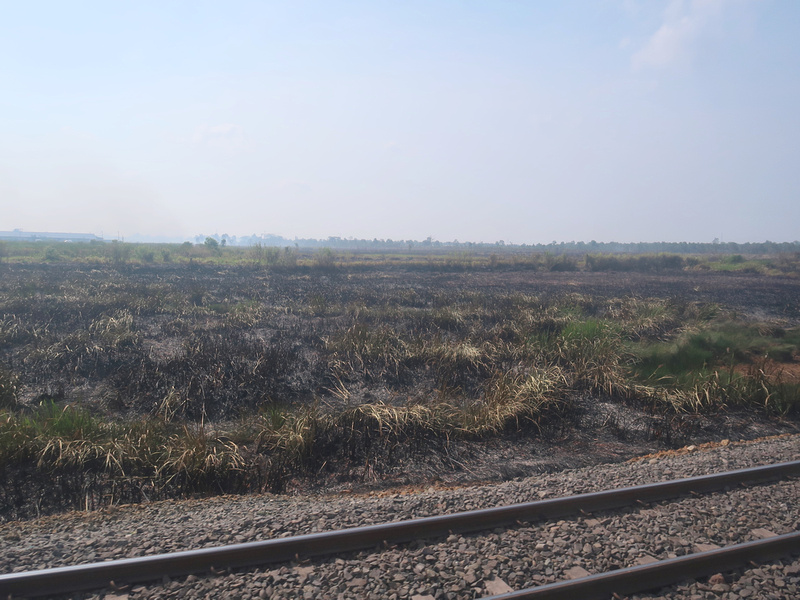 I was in a sour mood about palm oil on this trip as Palembang had been engulfed in haze from forest fires. Every year more forest land in Sumatra is burned to clear land for plantations, and the resulting smoke wafts over to Malaysia and Singapore. 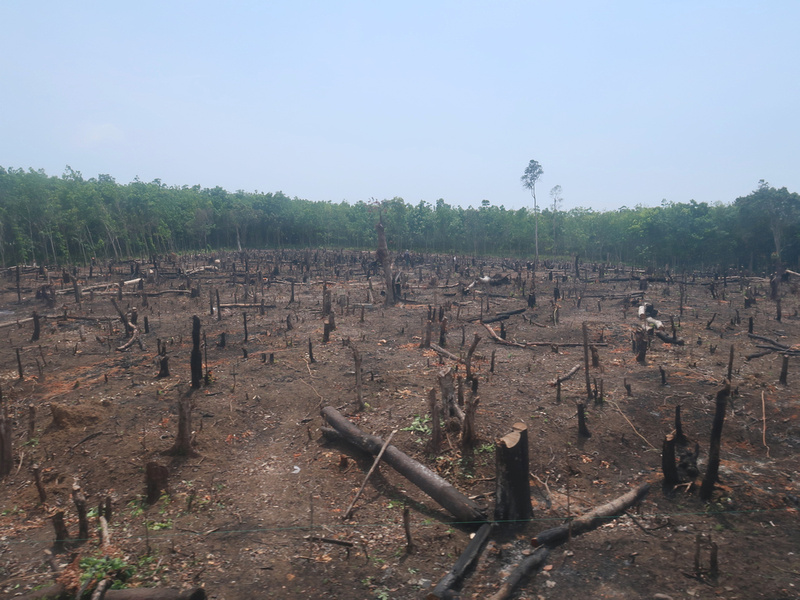 While the palm oil plantations are everywhere, it’s the coal mining in Indonesia that has built this railway.

The railways of South Sumatra have been laid to haul coal out of the mining areas to the two main ports near Bandar Lampung and Palembang. The railway is double-tracked for most of the way, avoiding delays by being stuck at a passing loop. 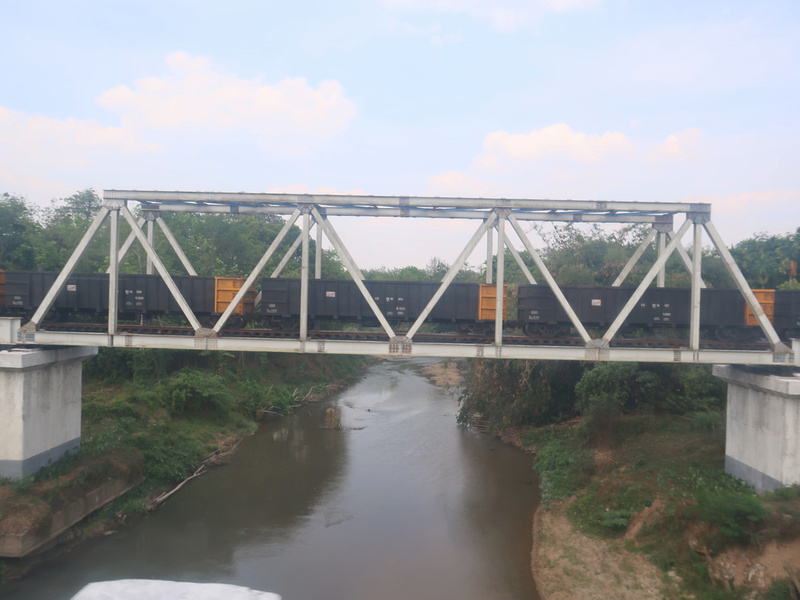 I didn’t keep track of how many freight trains we passed during the day, but it would have been at least one every half an hour. That would make it about 20 trains over the 10-hour journey.

That seemed like an excessive amount of trains, so I looked it up later. It turns out that Indonesia is the world’s largest exporter of thermal coal used in power stations, with China and India being the largest customers.

With so much coal being transported on this railway you can see how they are able to offer tickets for $2.80 on a 10 hour rail trip.

As you can see on the map, the railway line doesn’t travel in a straight line between the two cities. From Palembang the railway heads towards the mines in the middle of the island before heading south to Bandar Lampung. This was built for coal, not passengers.

Other services between Palembang and Bandar Lampung

I wanted to get on this train to see the scenery of South Sumatra. Knowing what I know now if you got the overnight sleeper train you wouldn’t be missing out on much. The overnight train would work well if you are on an overland adventure across Indonesia.

The sleeper train was parked at the station before we left so I had a look. The seated section had individual seats facing the same direction. It would have been a much more enjoyable trip if the day train had these seats as well. The commuter train that we passed also had comfortable seats, so I would hope they upgrade the seats in the future. 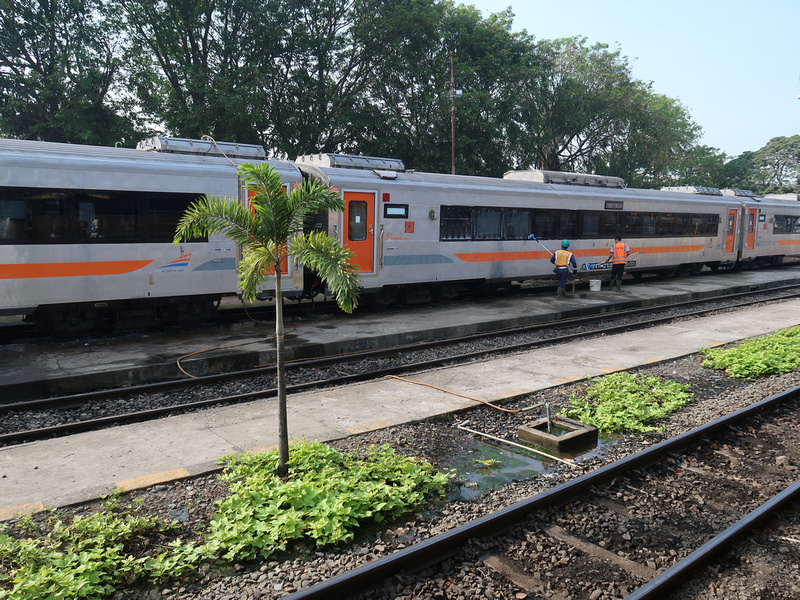 I’m following the development of the trans-Sumatran railway, along with other new lines in Indonesia. There is a railway under construction in South Sulawesi from Makassar, and that was meant to be finished in 2020. I will visit it when it opens.

Another proposal is for railways in Kalimantan in Borneo. This would be similar to the South Sumatra railway, where it is built for coal mining with a few passengers services running on it.

For more rail stories check out the complete guide to train travel in Southeast Asia.