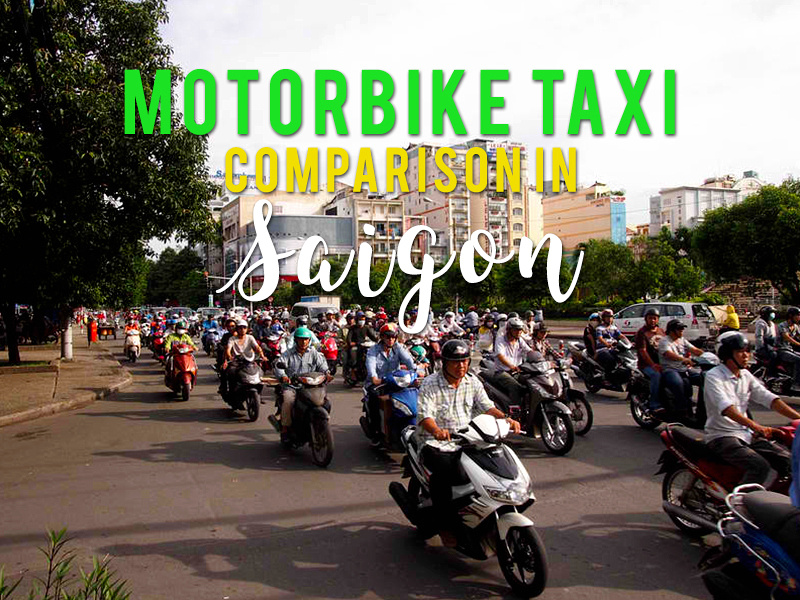 Ho Chi Minh City is famous for its motorbike traffic, which is not exactly what cites want to be famous for. For new visitors the swarms of motorbikes is one of the most noticeable features upon arrival.

Once you get over the initial shock you will see that the bikes aren’t going too fast, drivers are considerate of each other, and it beats sitting in traffic in a car. Until a comprehensive metro system is built, getting around by motorbike remains the quickest way to get around.

Visitors can get around by bike without having to hire one. There are motorbike taxis everywhere, and now ride-hailing apps are becoming well known alternatives.

This post compares the difference in each service, and how to go about getting a ride. 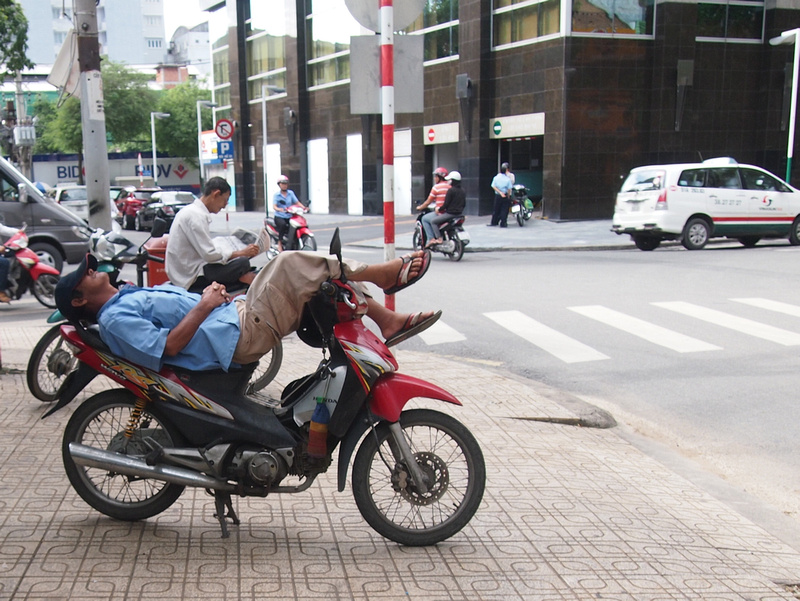 The original motorbike taxi’s are the Xe Om, which is Vietnamese for “hug the driver” (though hugging is optional). They can be found all over the city, often resting precariously on their bike. Most of the time they will find you, either by asking you as you walk by, or by calling out “motorbike you!” while they drive by in traffic.

The general rule of Xe Om pricing is that a ride is about 50-60% of a comparable taxi ride. That makes sense that it’s half the price given they have half the wheels. Getting that rate as a foreigner is another matter.

If you are a visitor then I would either get a Xe Om once you know what the comparable taxi rate is, or if you just want to get somewhere quickly and don’t care about haggling over a dollar. Make sure you have small change as well, so you don’t have to go through another renegotiation if they say a different price at the end.

Xe Om Links
Say What? Xe Om!! Motorbike Taxis in Saigon – A guide to riding with Xe Oms by hochiminhcityhighlights.com.
Saigon’s Xe Om: motorcycle taxi drivers that made me smile – Tales of Xe Om drivers by Jodi from legalnomads.com.

Uber has been on the scene here for a while, and they now offer a bike option. When you open your Uber app in Ho Chi Minh City you will see the UberMOTO option at the bottom. 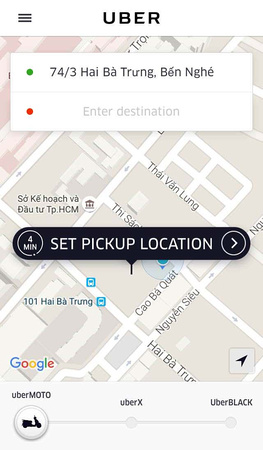 To test this out I requested the route from my street to Ben Thanh Market, which I know to be 40,000 VND by taxi. The same route by UberMOTO is 10,000 VND (45 cents). Payment is by credit card which you have set up in your app, or by cash to the driver. 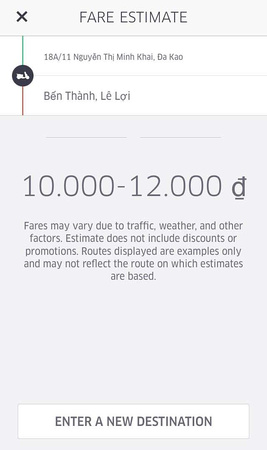 Once you check the fare estimate you can see how many bikes are available in the area. There seems to be lots of active bikes in District 1, which is where most visitors stay. 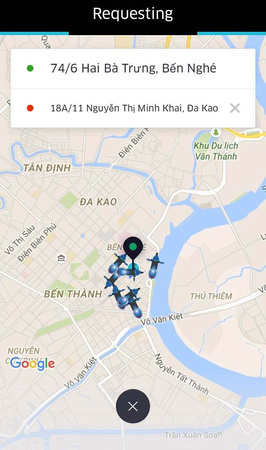 The app tells you the name of the driver and the make of their bike. They don’t have a uniform but some have Uber-branded helmets. Wearing a helmet is compulsory in Vietnam and traffic police will quickly find you and fine you if you don’t wear one. The drivers carry a spare helmet for passengers, so no need to BYO.

And don’t take selfies while on the bike, because phone snatchers are good at their game here. The things I do for this blog. 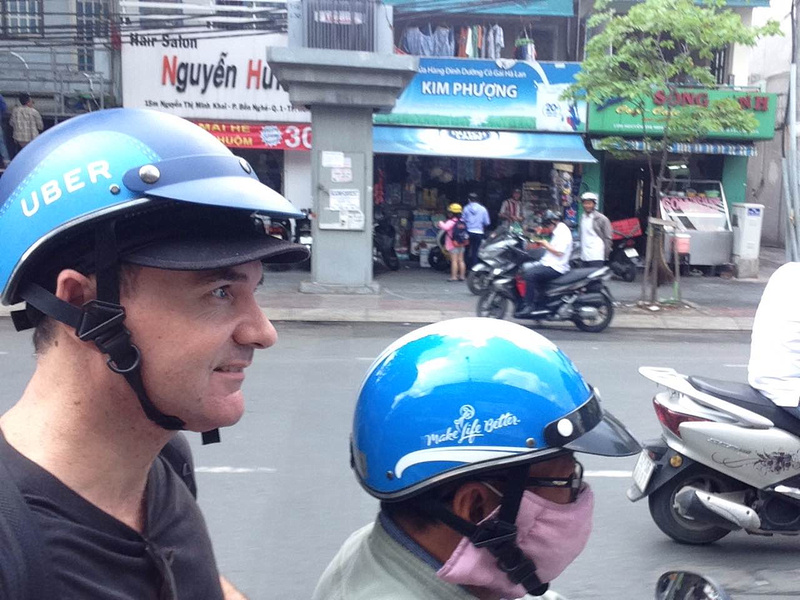 After the ride has been completed an invoice is emailed. The invoice has a map of your journey and the time. I still had my UK phone number in the settings (where I originally set up my Uber account) so the receipt showed GMT. Trust me, I haven’t been out at 4:15AM in a looong time!

Uber Links
Open an Uber account via my link and we will both get a free ride: Join Uber.
Review: UberMOTO in Southeast Asia – By Hao Tran at travelcodex.com.

[Edit: Uber has since merged with Grab in Southeast Asia and the Uber brand no longer exists here. I’ve kept this review for historical reference.]

Grab began in Malaysia, where it was originally named MyTeksi. It has since expanded to become Southeast Asia’s biggest ride-hailing platform. If you are travelling in the region then this is a good app to have ready to use (I will definitely be trying this in traffic-clogged Jakarta).

I have started to see more GrabBike’s around the city. They don’t wear a uniform but many of them wear the distinctive green helmets with the Grab logo.

You can pay in cash with Grab, and I like how the fare is shown on the same page (compared to requesting an estimate in Uber). 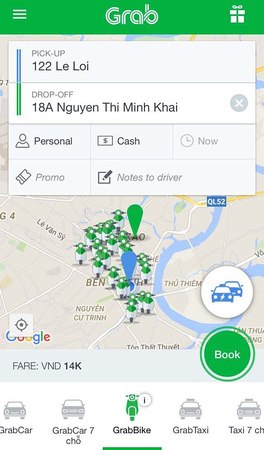 My moto driver turned up on time at the allocated spot. He didn’t have Grab-branded helmets like some of the drivers I have seen but he was looking at me like he was expecting me to be his passenger.

After the ride has been completed an invoice is emailed. It’s not as detailed as the Uber one, and it is in Vietnamese, though you can work out the details easily enough. 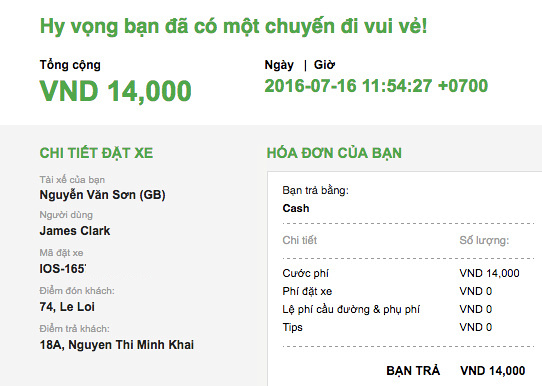 I haven’t taken enough rides and collected data to declare that Uber is cheaper overall. If price is an issue then download both apps to compare the options.

I like the details of the Uber receipt, though I like that Grab is a Southeast Asia business and offers an alternative to Uber, which has a reputation for poor business practices in some countries.

For speed Xe Om’s are still great if you have one that sits on your corner ready to go. Plus with a Xe Om your every move is not being recorded on an app.