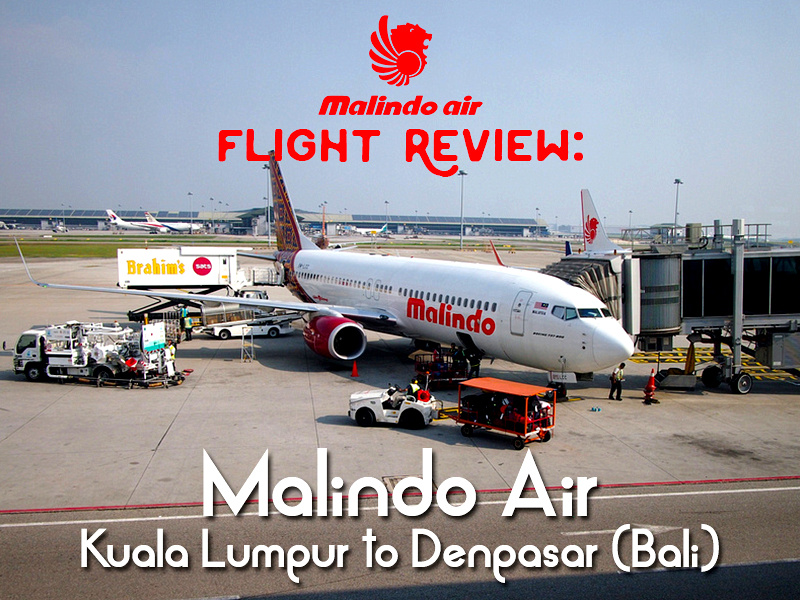 I flew with Malindo Air from Kuala Lumpur to Bali. I compared flights online with Skyscanner and they were the cheapest, and also flying at a reasonable hour of the day. I had never flown with Malindo, which was another reason I picked them. I like to try out different airlines if it’s an option, and I there there is no points benefit from any airline.

Malindo is part of the Lion Group, which I have flown with before. I went with Thai Lion Air from Chiang Mai to Bangkok, which remains as the airline with the least amount of legroom I’ve flown in. I have also flown with Wings Air in Indonesia. I haven’t flown with Lion Air, which was the airline that belly-flopped in the water short of Denpasar in 2013. Expats always seem to complain about them as well so I went in with low expectations about Malindo. It turned out that Malindo exceeded my expectations, even before I arrived at the airport.

I figured that Malindo would be a low-cost airline given that they are associated with the Lion brand. Upon booking, I found that you get a free checked bag and you can select your own seat at no cost. The booking process is simple with no extra hoops of added charges to jump through. The total fare is shown clearly, without any extras added on. I paid 179 MYR ($40 UD) which is a great deal for a 2-hour 40-minute flight.

Malindo flies out of the main KUL airport terminal (KLIA) and not KLIA2, which is where the low-cost airlines are. If you are going to the airport from KLSentral (the main train station in KL) then you can make use of the check-in facilities at the train station. 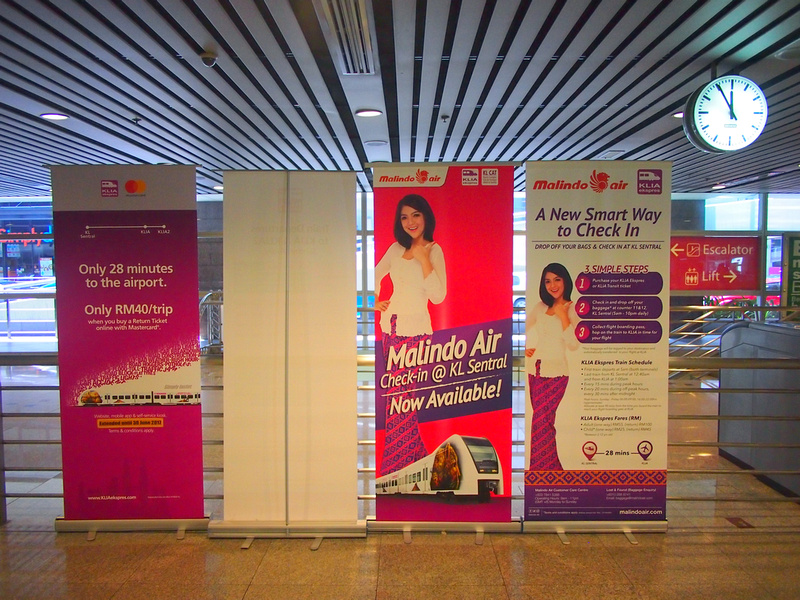 I have seen this at other airport trains but have never tried it, so today was my day to test it out. Checking in at the train station is available for Malindo Air, Malaysia Airlines, and Cathay Pacific. There was no one checking in when I went so I went straight to the counter and checked my bag. The bags are loaded onto a special compartment at the end of the train, so it is going to the airport at the same time as you. I was a bit nervous to part with my bag away from the airport, but in the end, it was not a problem, and it was nice to have unloaded my bag so quickly. The airport train takes 28 minutes to the airport, and it’s the fastest airport railway in Southeast Asia. 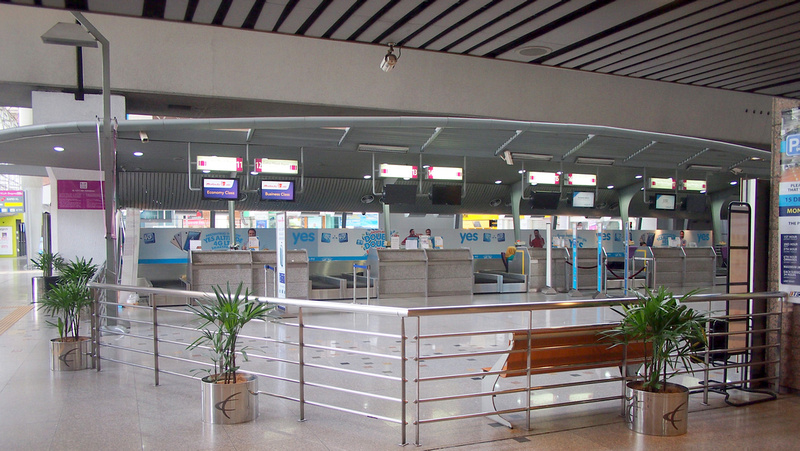 We boarded via an air bridge. 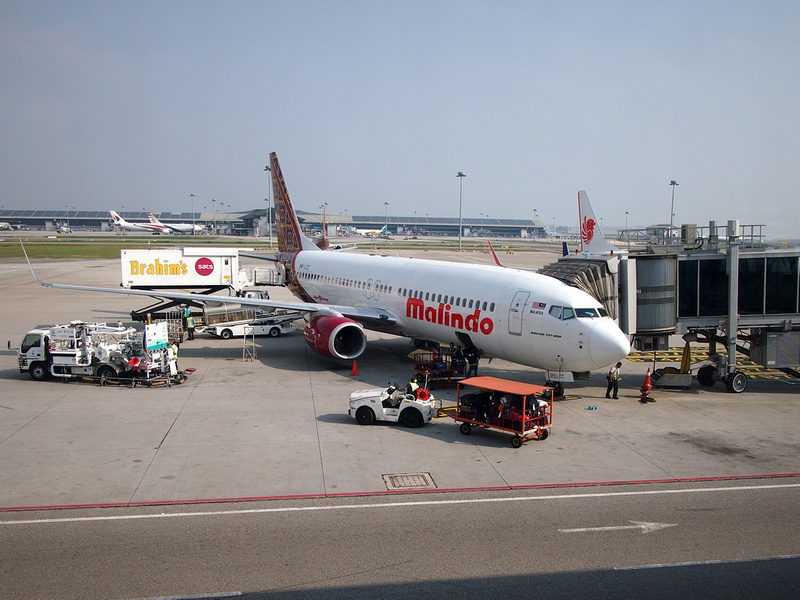 Upon boarding, I was surprised to see there were personal entertainment units on the flight. 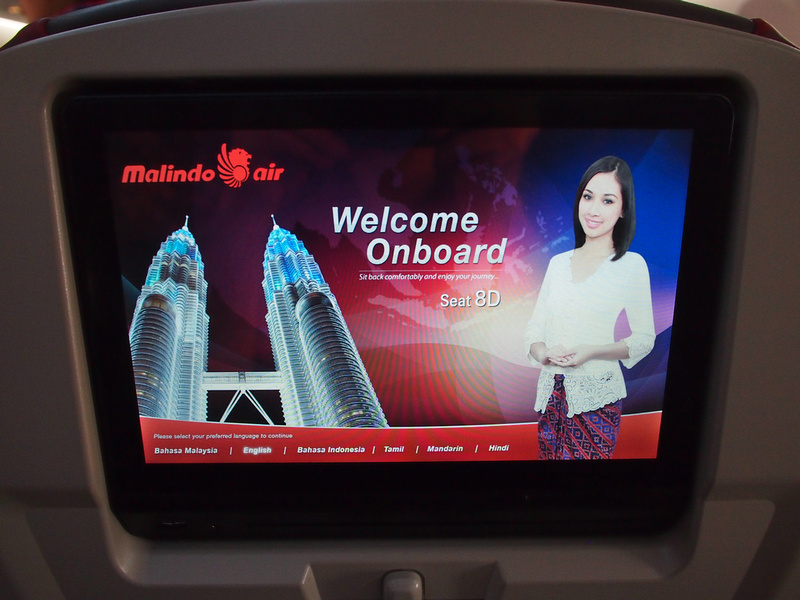 And I was also surprised by the legroom. When I sat down I thought I was in the exit row for a second, such was the amount of legroom. I don’t think in inches, so for scale here is my hand with the amount of space left. For comparison, on my Thai Lion Air flight my knees were touching the back of the seat in front of me. 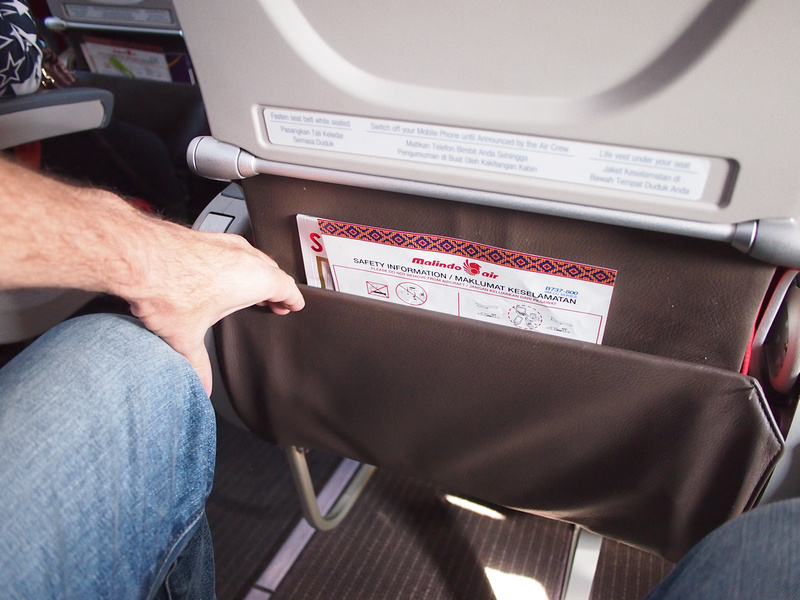 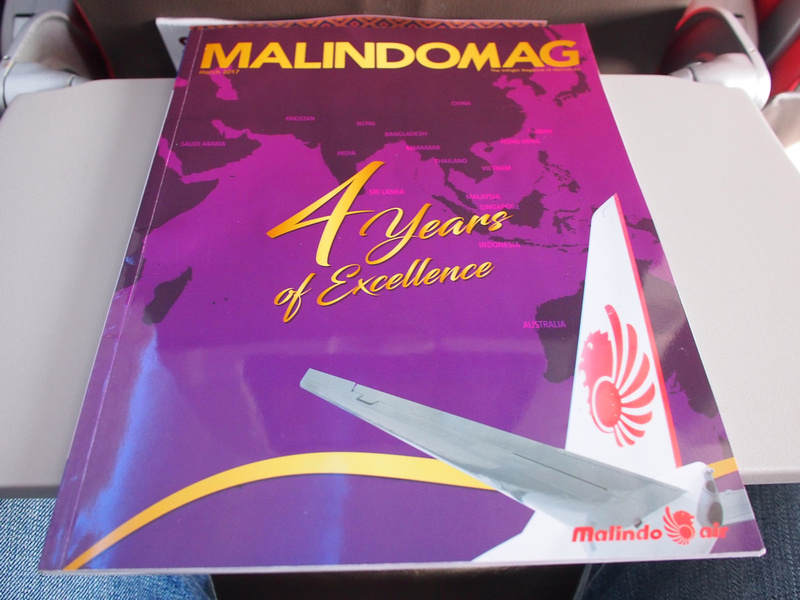 There is internet available onboard for purchase, should you need to get some work done or can’t go without for a few hours. 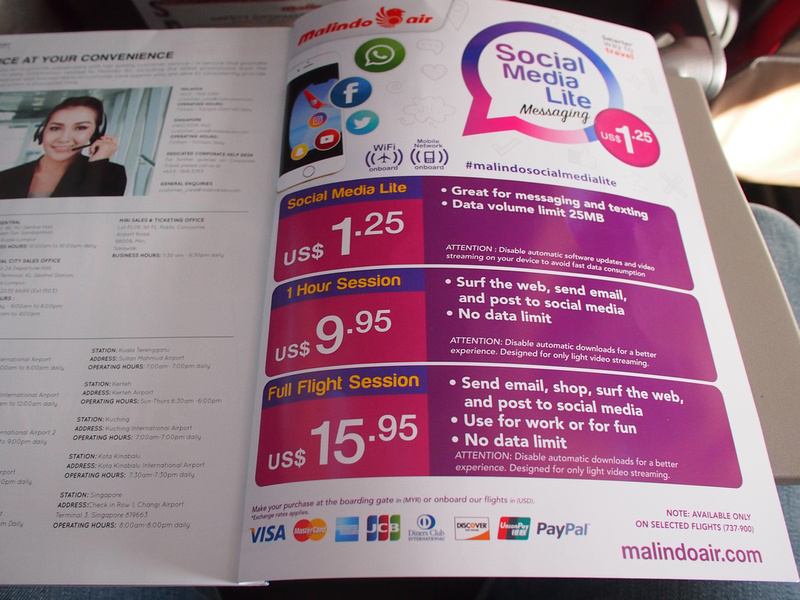 There were 8 movies available in English, though at under 3 hours of flying time I didn’t feel the need to watch a movie. 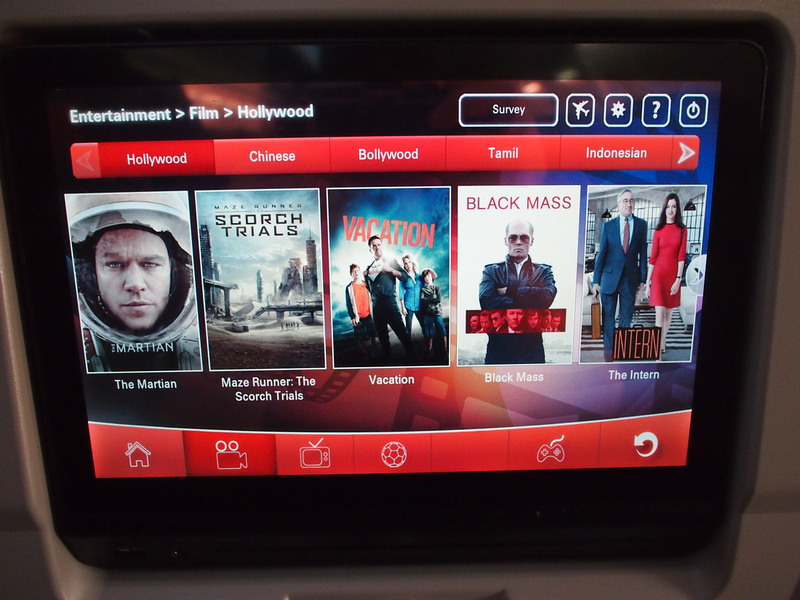 The route map for the KUL – DPS flight. 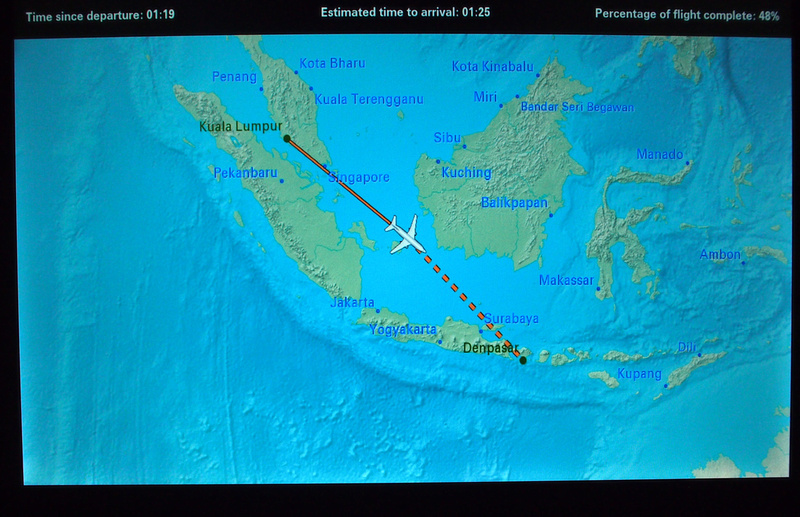 A welcome snack and drink are provided after take-off. 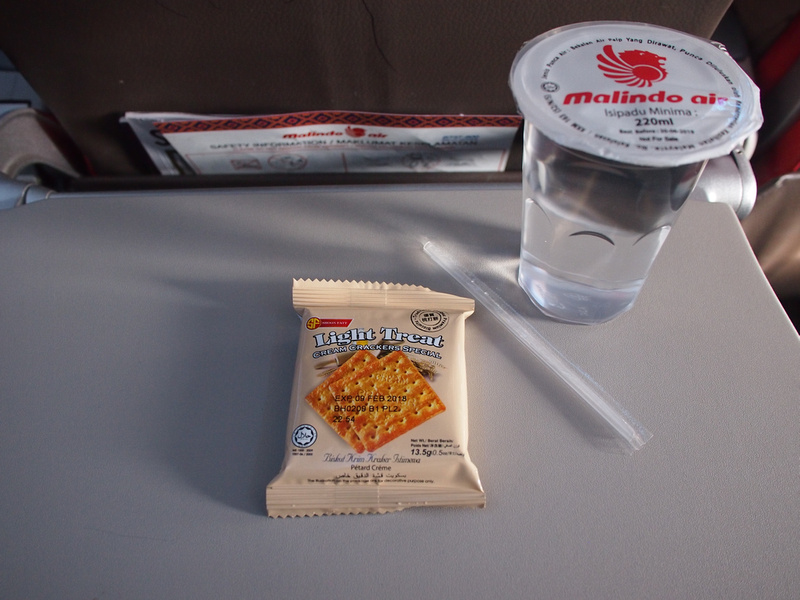 A hot meal is also provided on the flight. I got the vegetarian as the chicken option ran out early on. 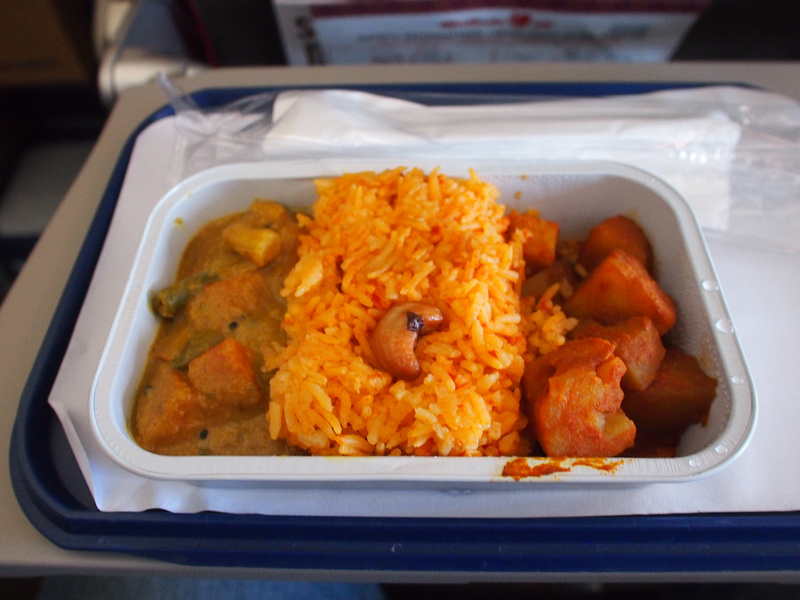 I entertained myself with a book, though I was happy to have a USB port in the entertainment system so I could charge my phone. 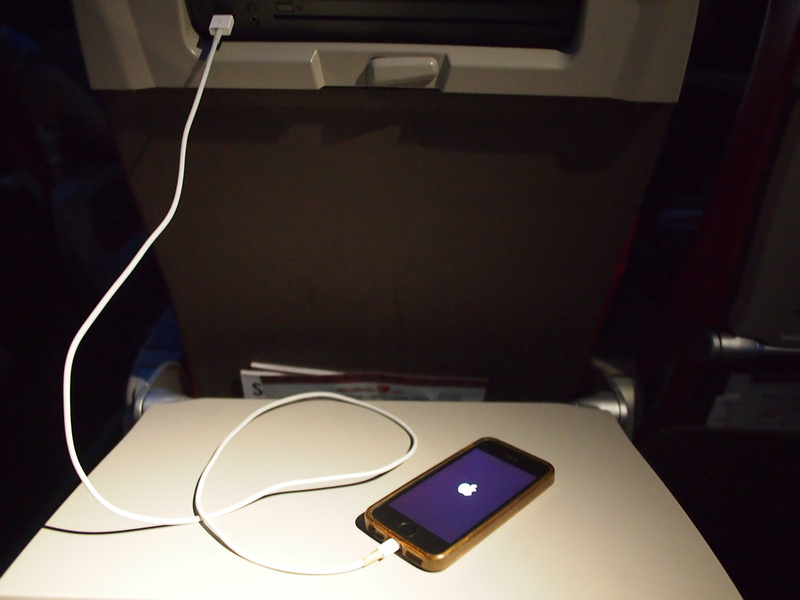 Overall this was a great flight option to get to Bali. Malindo Air also flies to destinations throughout Southeast Asia so they are a good option to fly to Bali in one day.