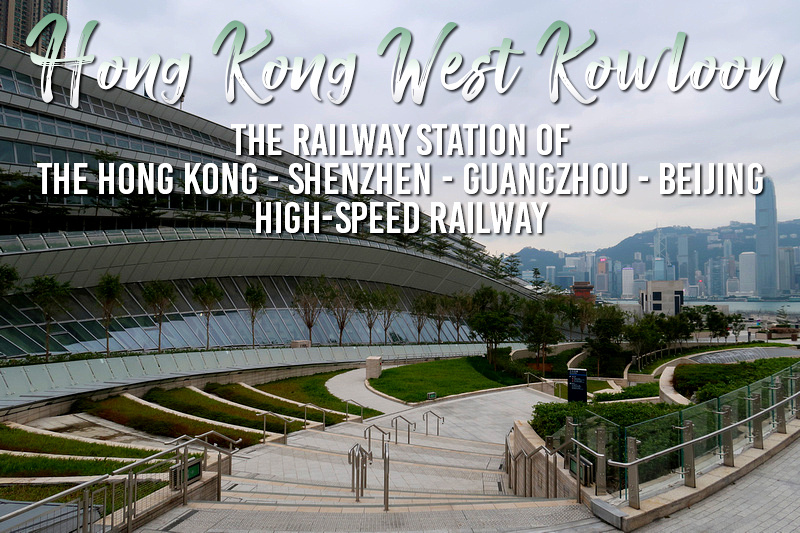 The Hong Kong West Kowloon Station is the terminus of the Beijing–Guangzhou–Shenzhen–Hong Kong high-speed railway. With the opening of the station in September 2018, it’s now possible to travel from Hong Kong to Beijing in one train trip. 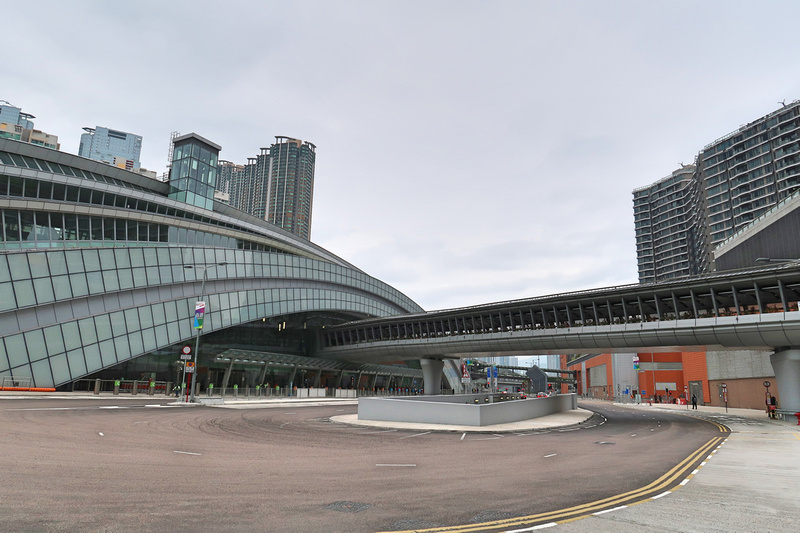 Construction began in 2011, which is about the same time that I became a regular visitor to Hong Kong. I’m here once or twice a year, and if I have a flight going through Hong Kong I like to make a stopover. I’ve been watching the progress of this project over the years, so when it was finally opened I had to have a look. 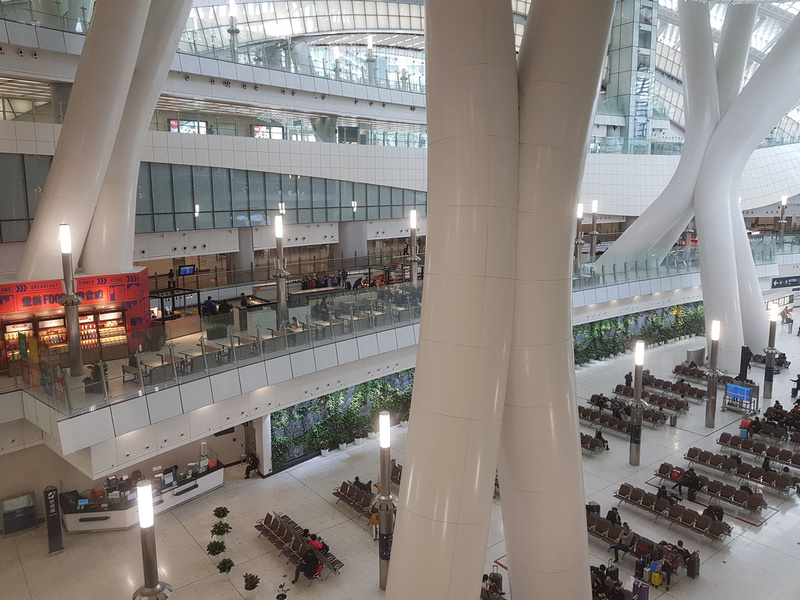 I call my trips to East Asia “infrastructure holidays”, as I marvel at how grand the projects are here compared to Southeast Asia and Australia. I certainly had infrastructure envy walking around this beautiful station.

The bright white space and white beams reminded me of Calatrava’s Liège-Guillemins train station, though the beam styles are completely different. 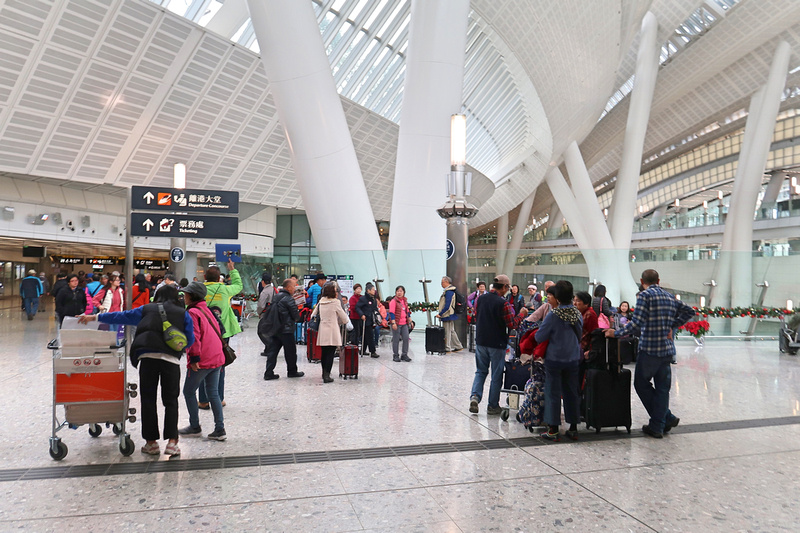 I was just a casual visitor so I didn’t get to see the area beyond the ticketed area. You can see the waiting area below, where the underground platforms are. The station has been designed to allow light to reach the lowest levels, and it gives the terminal a great sense of space. 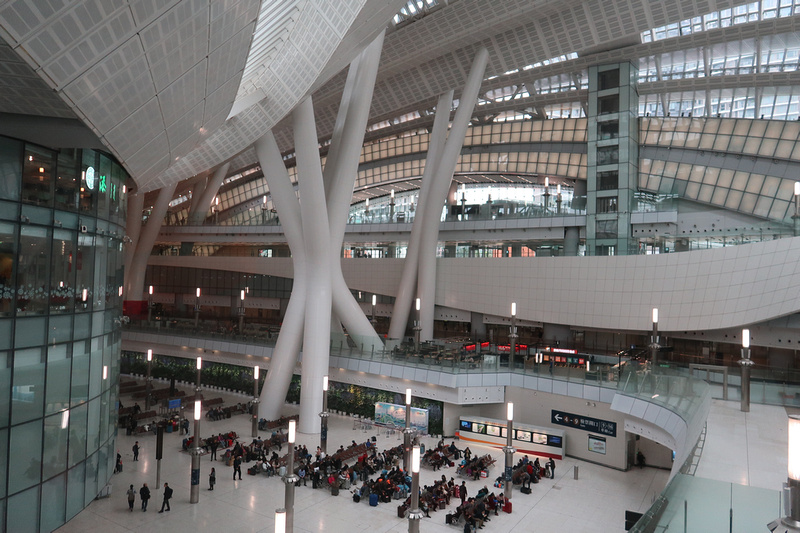 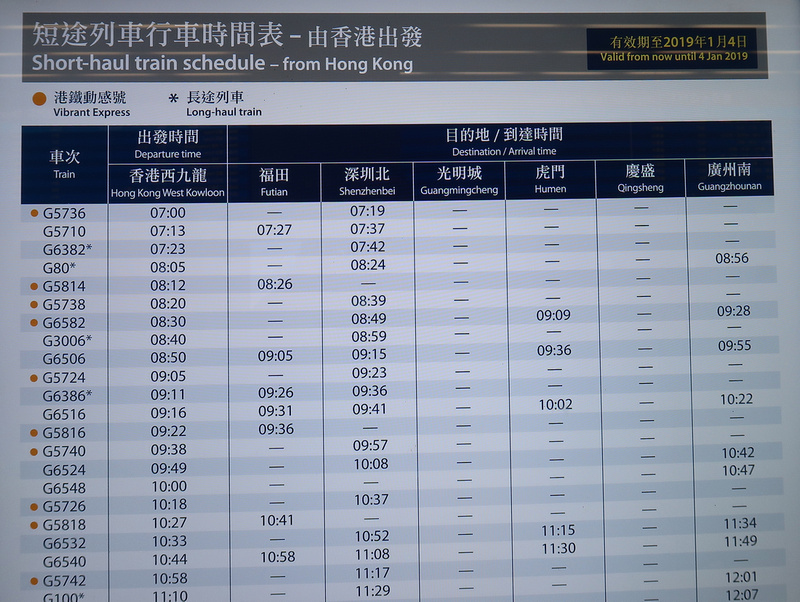 There is a short-haul and long-haul section, so Shenzhen and Guangzhou commuters can be more efficiently moved. In the long-haul department there are train services to Shanghai and Kunming among other places. 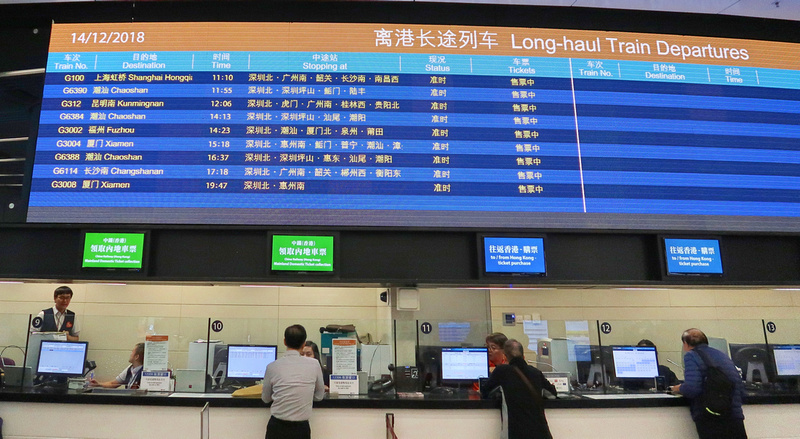 And of course there is a train to Beijing. The train departs Hong Kong at 8.05 and arrives in Beijing at 17.01. At 9 hours of travel time I would fly to Beijing if I needed to go directly there. While there will be demand for this trip, it’s more useful for the stops along the way. And ultimately this route is a political statement that Hong Kong is now firmly connected to the capital.

I was surprised with how user-friendly the station is, with everything in clearly-written English and prices clearly marked. 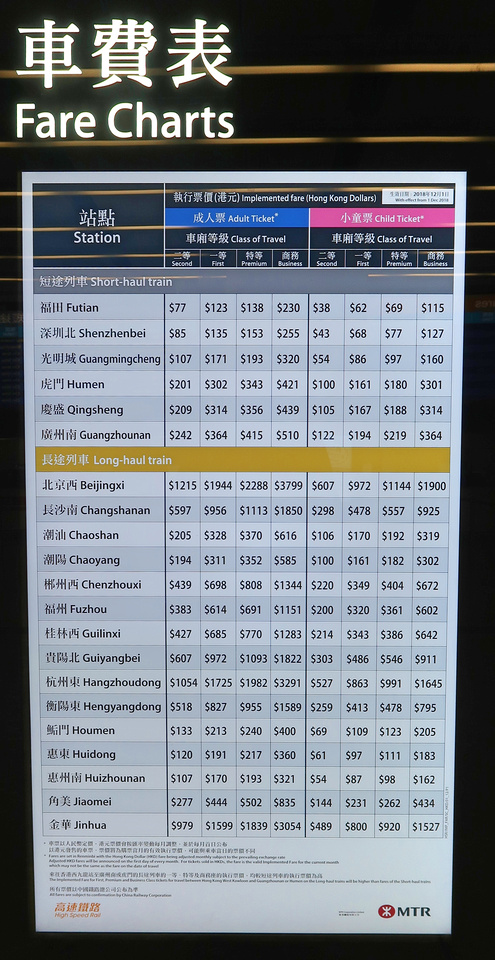 One of the most impressive things about the station is its location. Usually new high-speed stations are built further outside the city. For example the Bang Sue central station in Bangkok is being built in the northern suburbs of the city. In Hong Kong the station is close to the harbour front in Kowloon. You are one stop away from the financial district of Central, and you can walk to harbour front area of Tsim Sha Tsui. It helps that the station is part of the reclaimed land of Kowloon West, and that they spent billions to build a tunnel to get there. 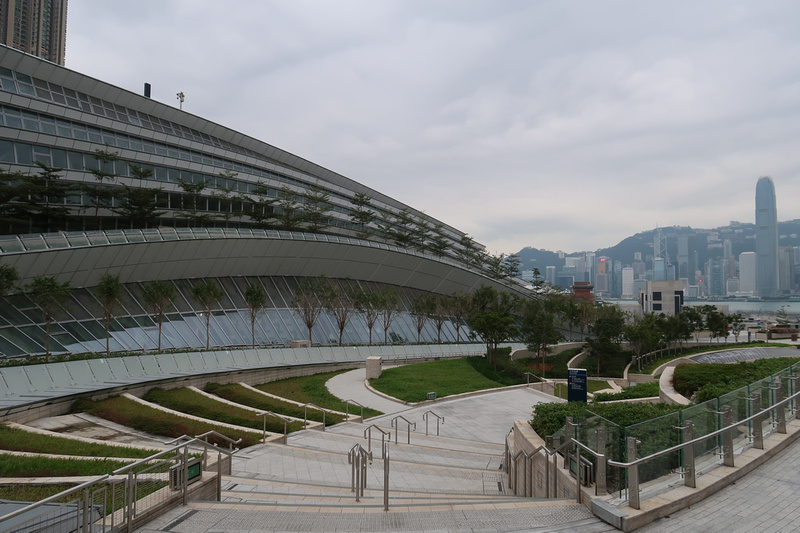 The station also doubles as a public park. This enormous building doesn’t just take up a prime piece of real estate, but it becomes part of it. Most of the station is underground, and the protruding section is the feature of the park. There is a walkway on the roof with greenery built into it. 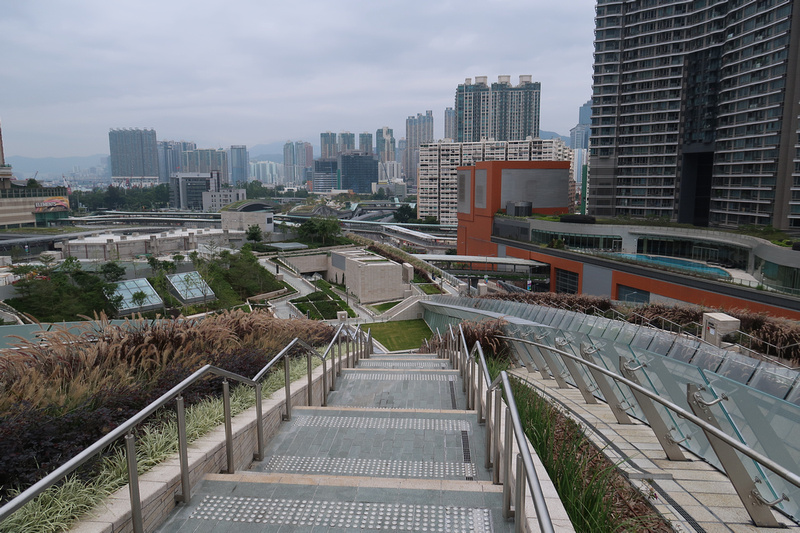 From the rooftop you have a commanding view of the Hong Kong Island skyline. The construction between the station and the harbour is part of the West Kowloon Cultural District. I wouldn’t be surprised if this lookout area becomes an Instagram hotspot once the word gets out. 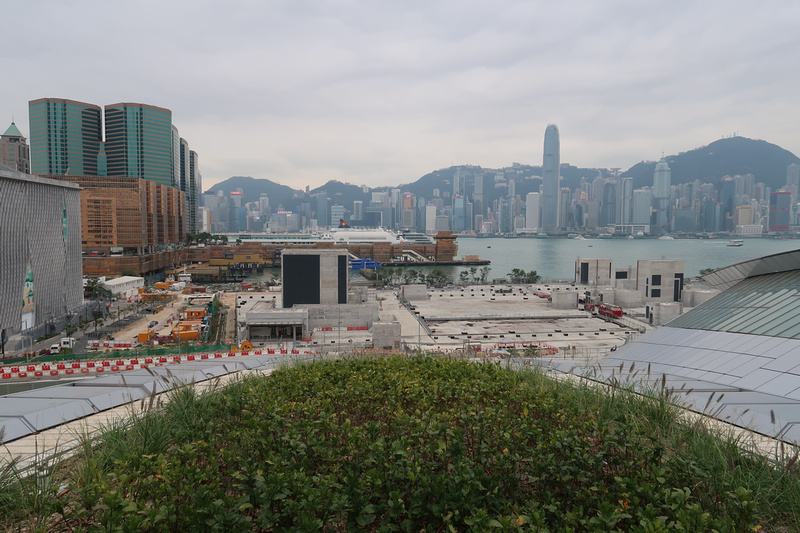 The station has not been without controversy. Apart from the cost overruns and construction delays, there was concern that a quarter of the station is under mainland jurisdiction. 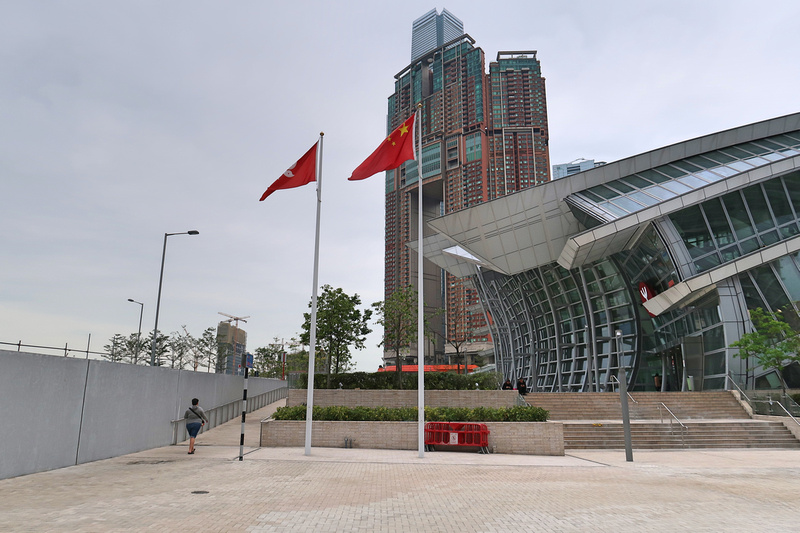 I travelled around China by train in 2010, and now I might be ready for another trip originating from Hong Kong. I want to travel from Hong Kong to Hanoi by train, so I would break that up into stages. I would stop at Guangzhou for the Canton Fair, and then Nanning (where the Hanoi train departs). I’m told it’s easier to get a Chinese visa in Hong Kong, which would be welcome after my Chinese visa debacle in Saigon.

I would have liked to have taken the train somewhere on this trip, but I had another big Hong Kong infrastructure project to visit (the world’s longest bridge).