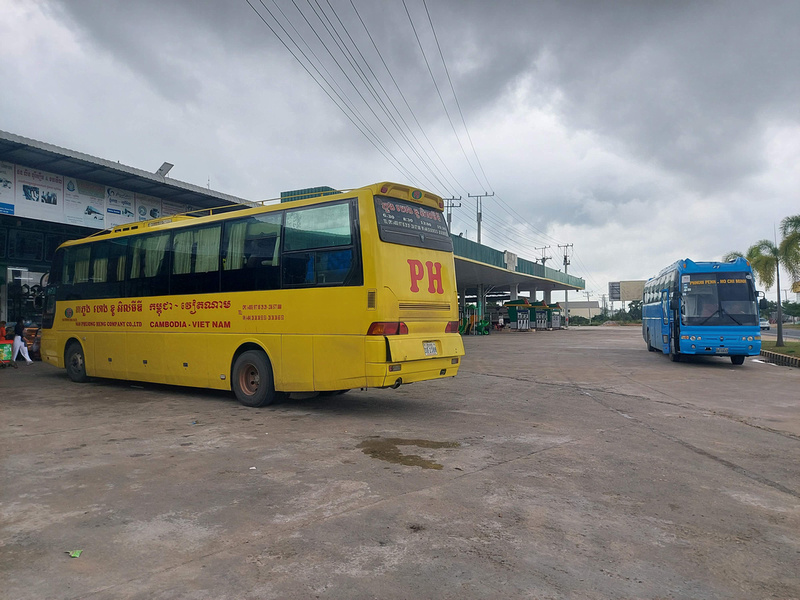 Ho Chi Minh City to Phnom Penh is 240 km apart by road, and getting the bus is the cheapest way to travel between the two cities. Despite the relatively close distance and flat terrain, the roads are congested and not built for highway cruising. Google Maps says the trip can be done in 5 hours and 30 minutes, and bus companies advertise the trip as 6-7 hours. In reality, the trip takes about 7-8 hours, depending on the time of day and other unscheduled stops.

This guide shows how to go from Ho Chi Minh City to Phnom Penh by bus (and vice-versa). 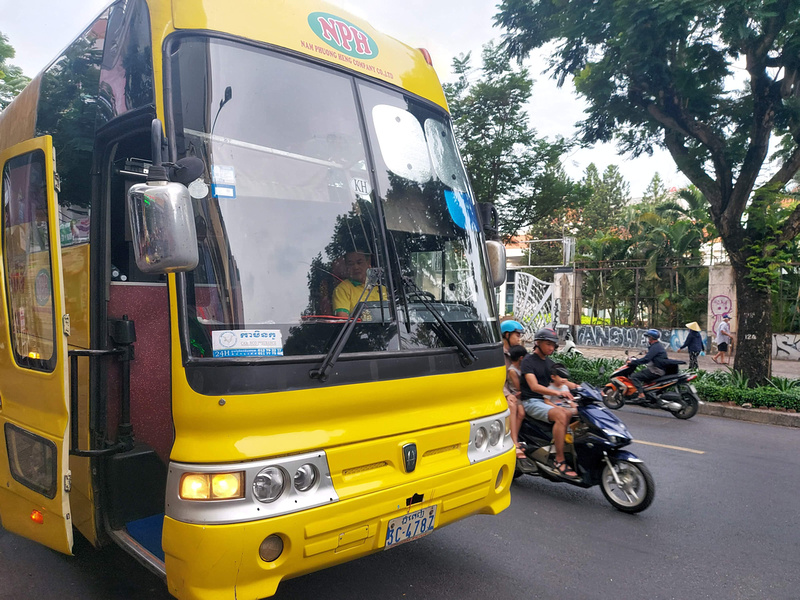 Getting the bus from Ho Chi Minh City is easy because the bus stops are in the Pham Ngu Lau backpacker area in District 1. There are more bus services in other districts, but for visitors to Saigon, this is the most convenient spot.

There are numerous travel agents on Pham Lgu Lau Street as well as the official offices for the bus companies. I walked along Pham Ngu Lau to compare prices and bus types. Some of the buses are sleeper buses with bed chairs. I find those uncomfortable as a tall person, so I looked around for other options. Some buses have seat configurations of 2×2, but Phuong Heng Bus has 2×1 seat configuration. This is the ideal seat configuration for bus travel, as one less seat in the row means wider seats.

There was good legroom and the seat was comfortable. The bus has wifi but it wasn’t connecting on the day of my travel. The bus is air-conditioned without being set to near freezing (as so many bus services do in this part of the world). 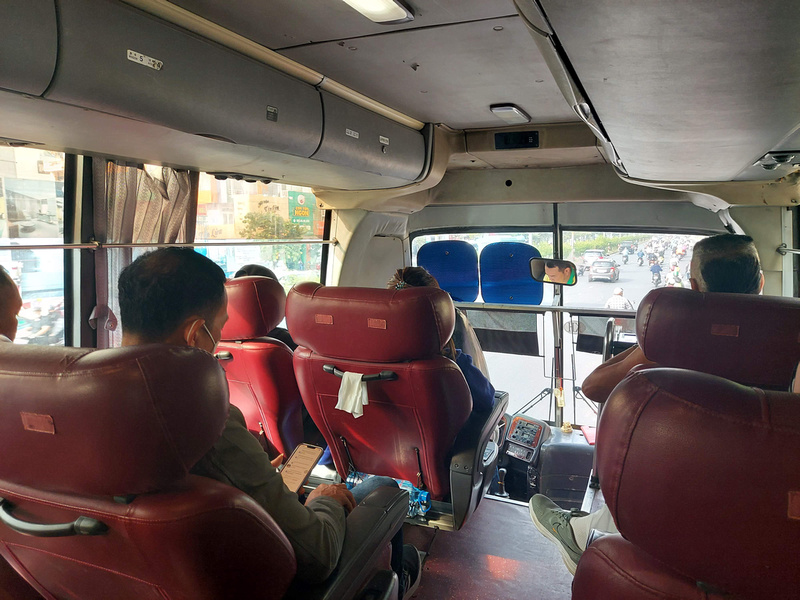 The journey time was quoted as about 7 hours, but after seeing the road conditions, 7 hours would be the best-case scenario. My trip took 7 hours 30 min going to Phnom Penh, and 8 hours coming back.

I recorded the time to see where all the hours went for such a short trip. Here is the breakdown: 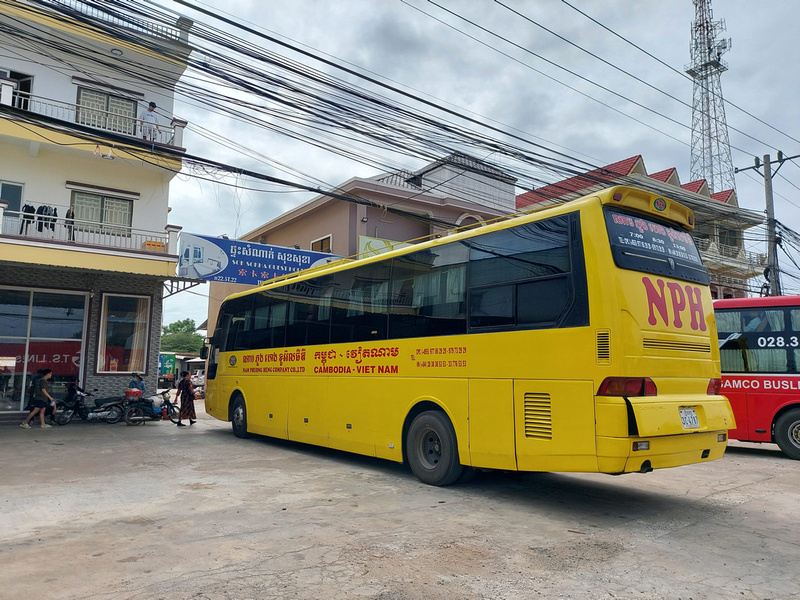 The Phuong Heng bus stop is at 279 Pheah Sihanouk Blvd, and it is next to most of the other bus companies that go to Ho Chi Minh City. This is not as convenient a location as the Pham Ngu Lau stops in Ho Chi Minh City.

Grab is available in Cambodia, so I used the wifi in the bus office to order a tuk-tuk to my hotel. The Grab trip cost 5,700 Cambodian Riel ($1.40 USD) to go to my hotel near the riverfront.

On the Phuong Heng bus service, the ticket collector also collected our passports before we arrived at the border. He checked that we had a Cambodia visa, which you should print out. He also wanted a printout of my Vietnam visa, even though the passport stamp indicates how long I can stay in Vietnam. Luckily I had that with me.

I have done this trip before with another bus company, and they tried to charge a $5 admin fee for passport processing. There was no extra service shakedown here. Also on the last trip, the Vietnam border agent tried to charge me a $1 health screening fee (where the scanner checks your temperature). That procedure seems to have been dropped as well.

An unusual feature of this service was that immigration on the Cambodian side was done while we had already crossed the border. The bus drove us to a nearby restaurant for our lunch break. We were there for about 40 minutes, and then the bus assistant returned with our passports. They must have an arrangement where we are allowed to cross without our passports. This system is probably dome to save some time, as we had our lunch break while waiting for our passports to be stamped. 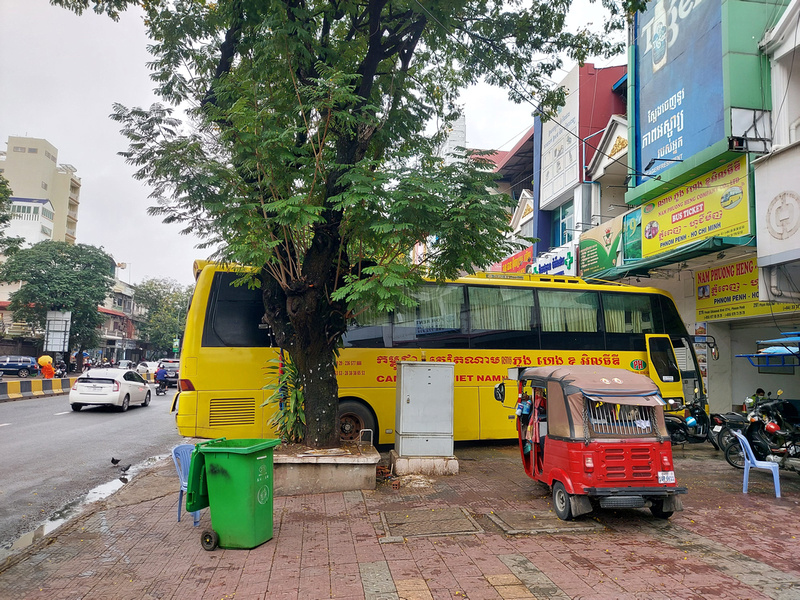 I was planning on getting another bus company for comparison, but I was happy with my single-seat option, so I booked the return ticket with Phuong Heng. The ticket from Cambodia cost $23 USD. If you book from a travel agent in the city, they usually arrange a pickup service from your hotel to the bus stop. Check when you book.

This was the time breakdown for the PP-HCMC trip: 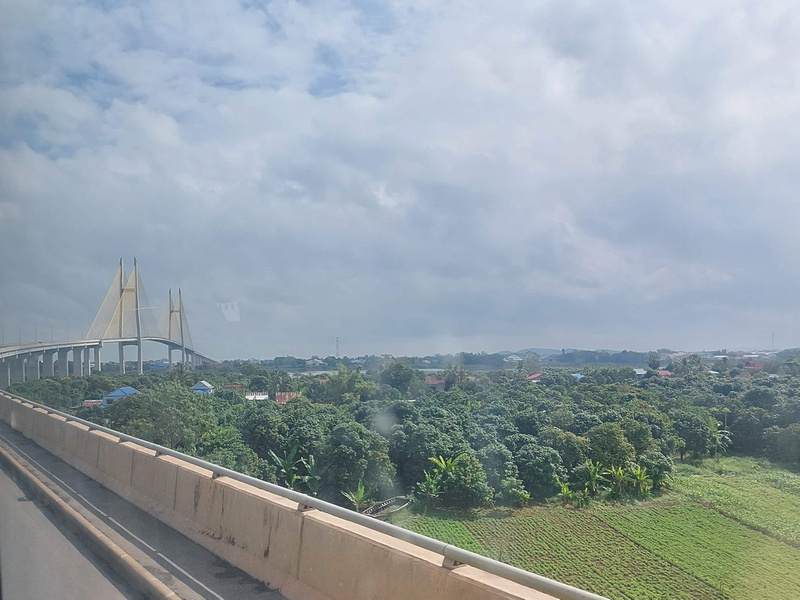 [Tsubasa Bridge over the Mekong River.]

This trip also had the same passport arrangement where our passports were processed while we had our lunch break in Bavet.

Is there an expressway between Ho Chi Minh City and Phnom Penh?

There is no expressway (highway/freeway) between Ho Chi Minh City and Phnom Penh, which accounts for why this trip takes so long. The roads on both sides of the border are congested with two or four-lane roads. Most of the trip within Vietnam is in the boundary of Ho Chi Minh City and it is now almost completely urbanised to the border.

There is a plan to build an expressway by both governments, which will help to reduce the travel time between the two cities.

Is there a train between Ho Chi Minh City and Phnom Penh?

There is no train between Ho Chi Minh City and Phnom Penh. There have been numerous announcements over the years to build a railway between the two cities, but that would be years away if it even happens. Read more about the proposed railway from Ho Chi Minh City to Phnom Penh.

Are there flights between Ho Chi Minh City and Phnom Penh?

There are flights between Ho Chi Minh City and Phnom Penh, and that takes under 1 hour. There are not many flights though, so the prices are more expensive compared to other international flights in the region.

VietJet Air tried this route briefly but it was later withdrawn.