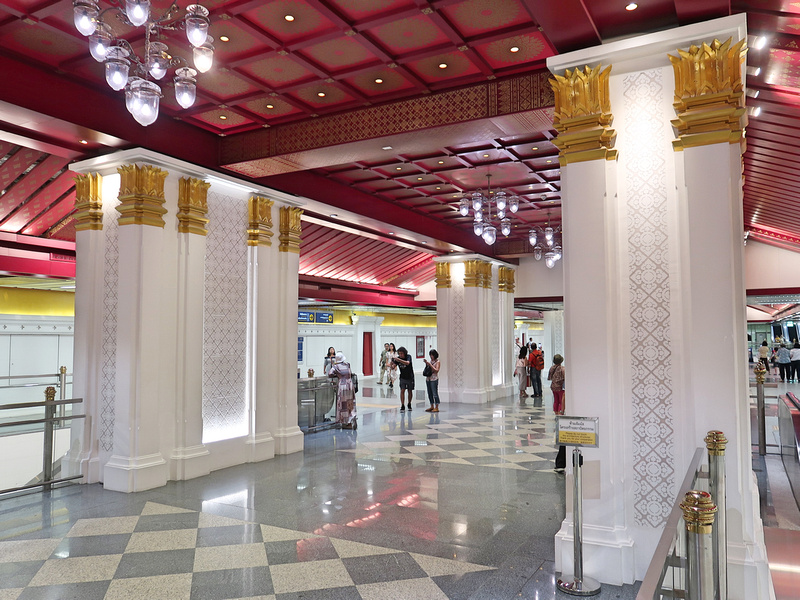 Bangkok is slowly but surely building out its mass transit system to help ease its infamous traffic problems. In July 2019 the western extension of the MRT Blue Line opened, making it the first railway of any kind in the Bangkok old city area.

The extension is from Hua Lamphong (the main railway station), through Chinatown, Rattanakosin (the old city), and then under the river to western side of Bangkok. The Blue Line has now been extended and is a circle line (or more like a lopsided b or q shape). 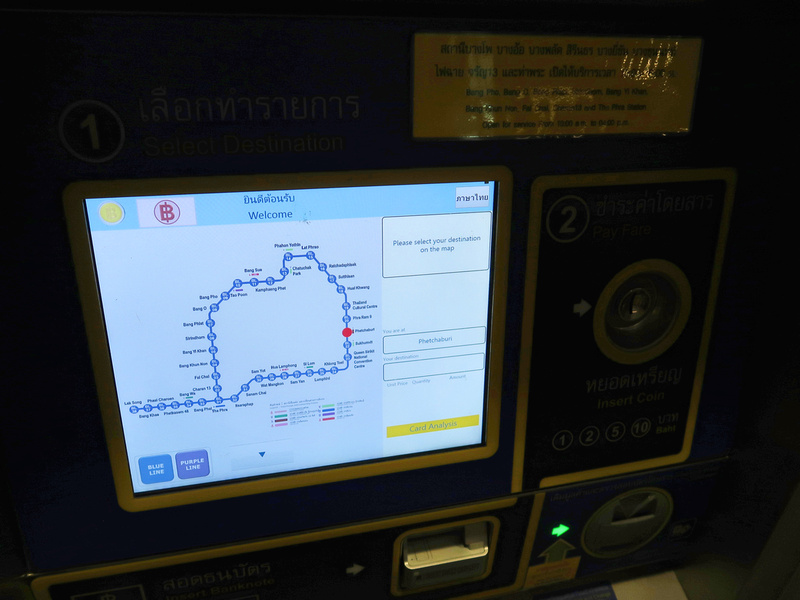 There are other lines under construction as well, and now the MRT are displaying maps of what the Bangkok metro system will look like with these lines. This map shows the lines under construction as greyed-out lines, and it doesn’t include proposed lines that haven’t started yet. It’s by no means Tokyo, but it’s heartening to see a comprehensive metropolitan railway system slowly filling out. 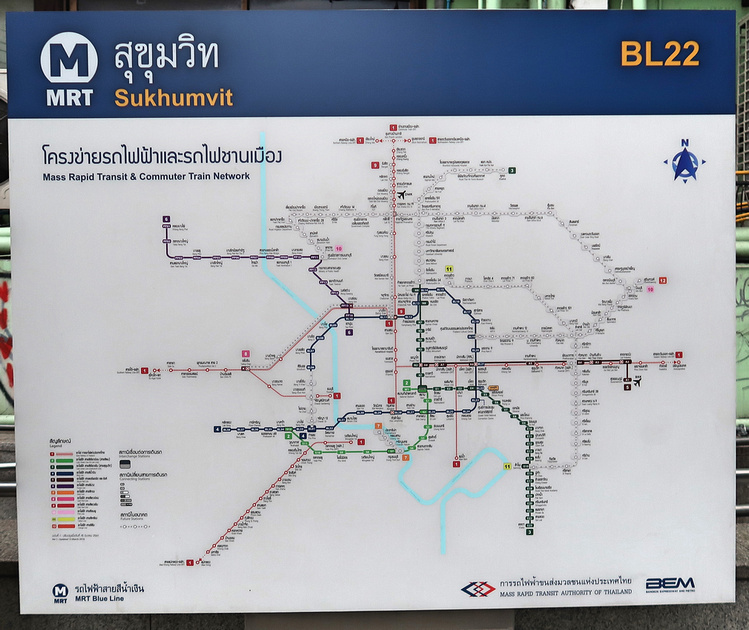 During my last visit caught the metro from Sukhumvit to Chinatown to see the some of the new stations. 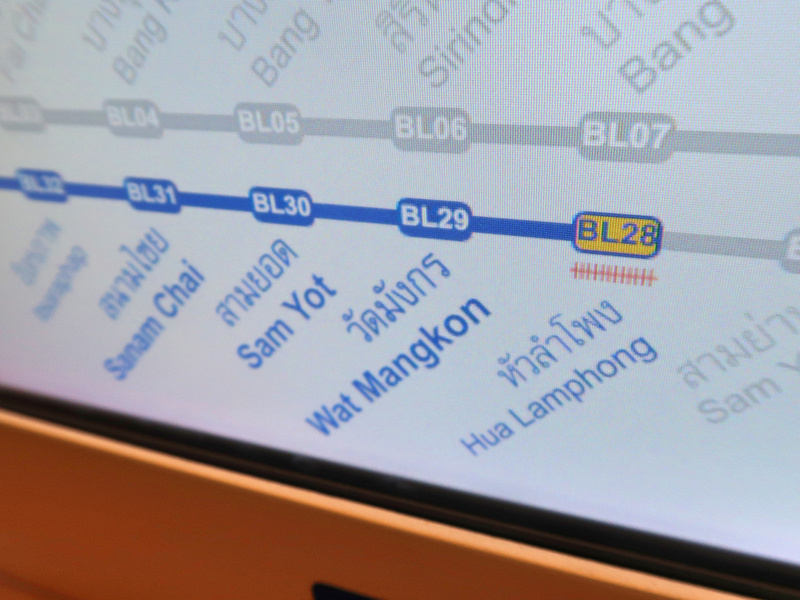 For this trip I visited the three stations west of Hua Lamphong, which are of most use to visitors. 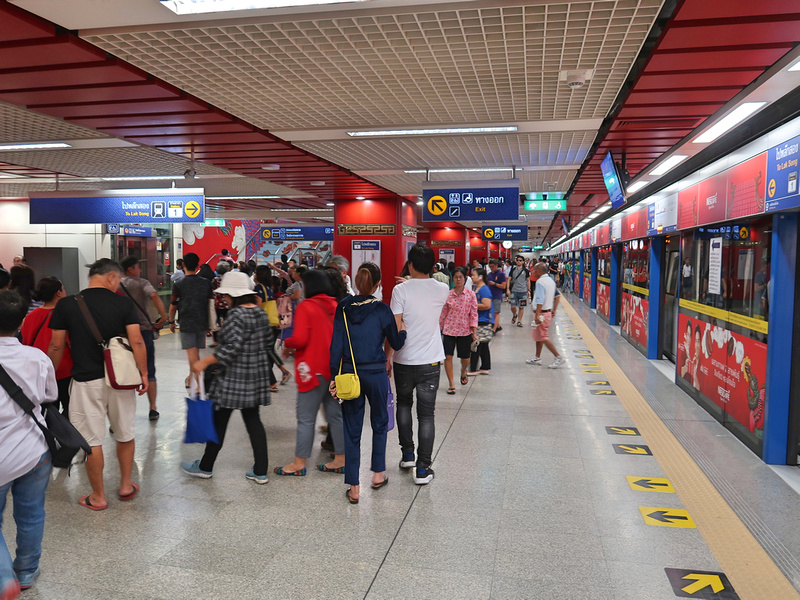 Wat Mangkon is the first stop after Hua Lamphong and it is the new gateway for Chinatown. I love walking around this area, and usually I go to Hua Lamphong and then walk the rest of the way. Now the metro takes you right there. 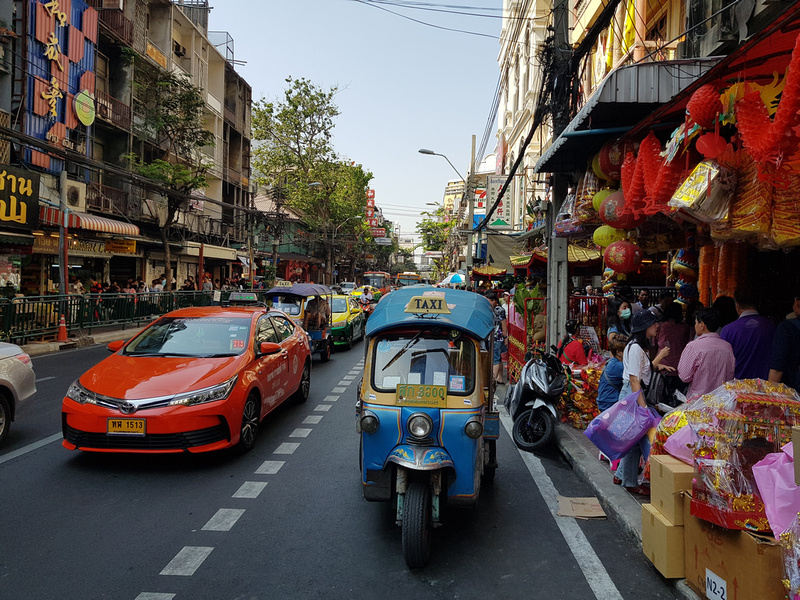 I remarked on a previous visit to Chinatown that you should go before the metro opens. Sure enough this station appears to be a crowd favourite as it was mayhem when I visited. I went on a Sunday so it might have been a weekend crowd. There was also a high proportion of people taking selfies on the steps and other photogenic spots. Maybe it’s going to take a while for the novelty to wear off. 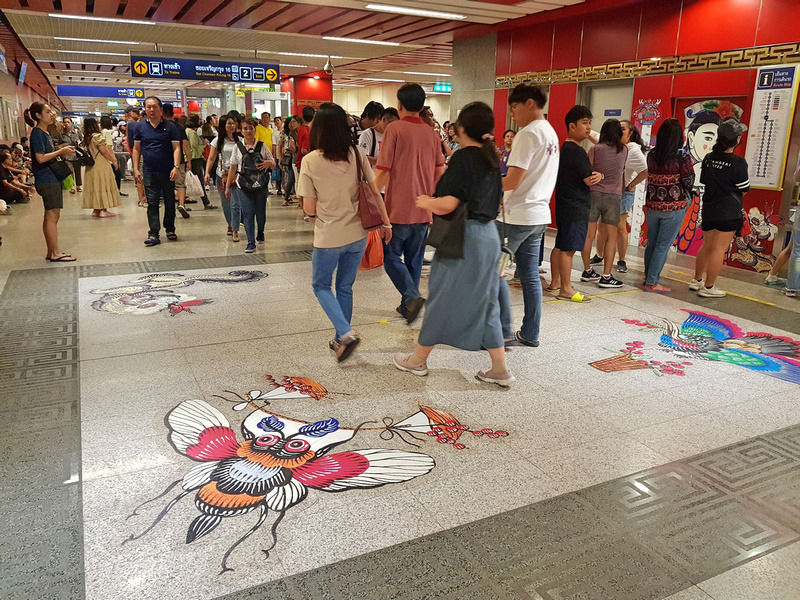 The station emerges at Charoen Krung Rd (next to Wat Mangkon). From here it’s less than 5 minutes walk to the heart of Chinatown at Yaowarat Road. 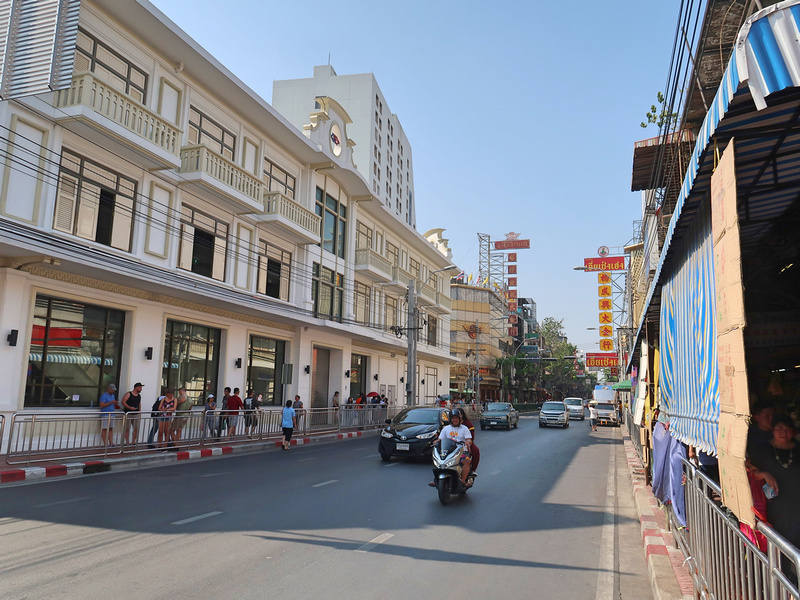 Sam Yot is the first station inside the true old city area of Rattanakosin Island. The station has been disguised as a block of old shophouses similar to the style that you find in the old city. It still looks new, but once it gets a bit weather-worn it might blend in more. 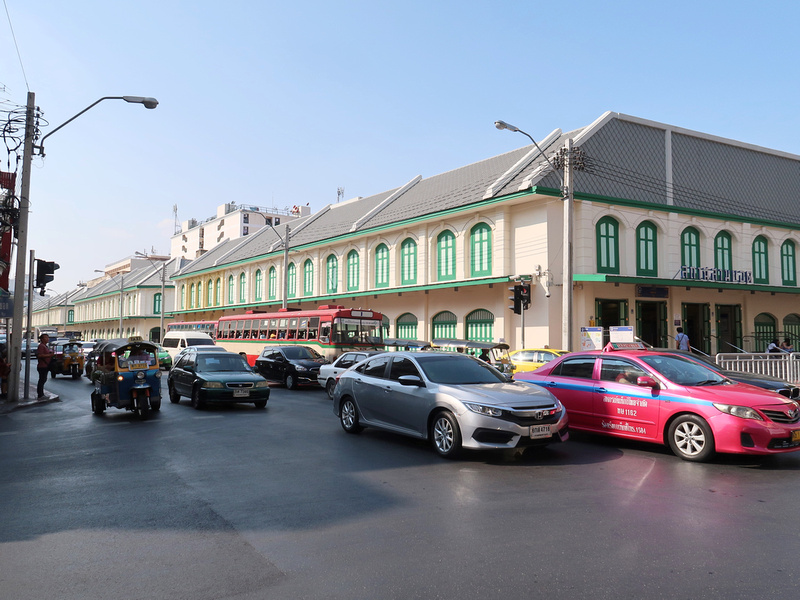 I walked here from Chinatown so I didn’t see the platform. Inside the station it there was hardly anyone here compared to Chinatown. 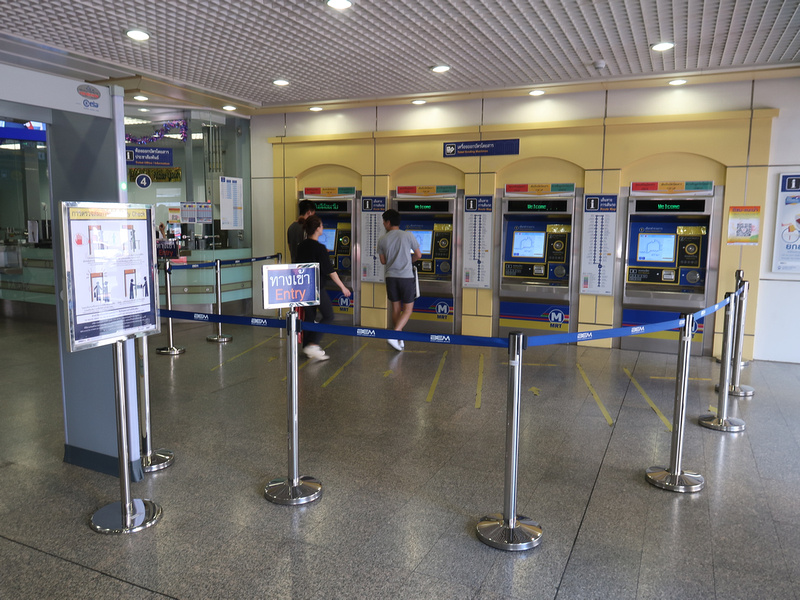 There is not much in this area yet, so I wasn’t expecting too many people here. There are signs that it could become a revitalised area. Near the station is the Ong Ang Canal. This man-made canal forms the eastern boundary of the old city, and it’s what made Rattanakosin an island. 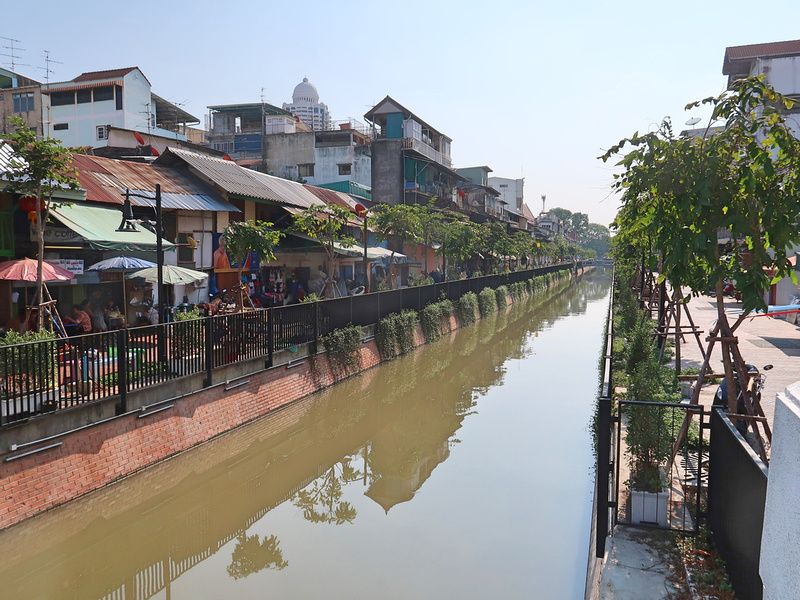 The Ong Ang Canal has been undergoing renovations, and the section near Sam Yot Station now has landscaped pedestrian plazas on either side. The residents along the canal were reportedly made to paint their houses to make it look more photogenic. I suspect there there will be more businesses opening up along here in the next few years.

The restored canal is near Bangkok’s Little India. It’s nothing like the Little India in Singapore, but here you can find some good cheap Indian eats. I’ve always though that they should make this area a Little India like Singapore, adding another interesting area to see in Bangkok. 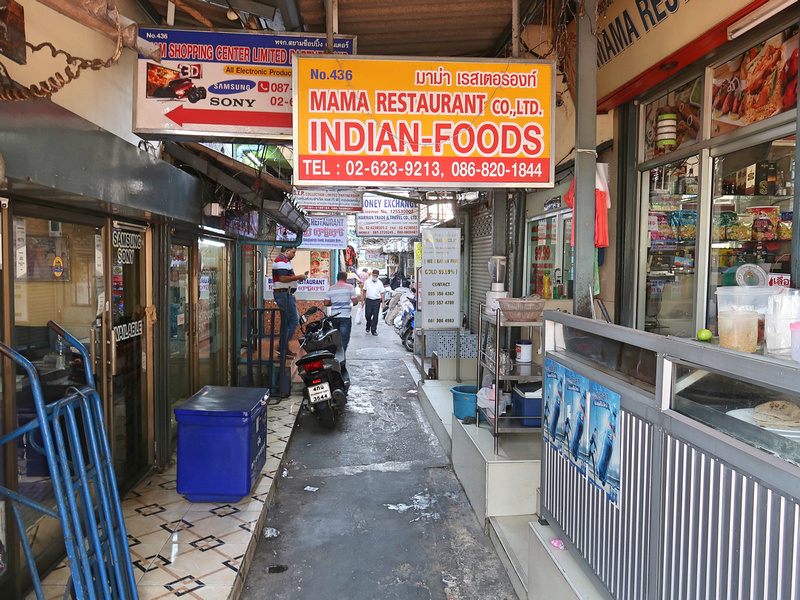 Opposite Sam Yot Station is a is the newly refurbished Cacha Bed Heritage Hotel. This 100-year-old Victorian-style hotel is now a hostel/budget hotel, and now that the metro is open it’s in a prime position. There is not many places to stay in this area, so I will be watching the area with interest to see how it transforms. 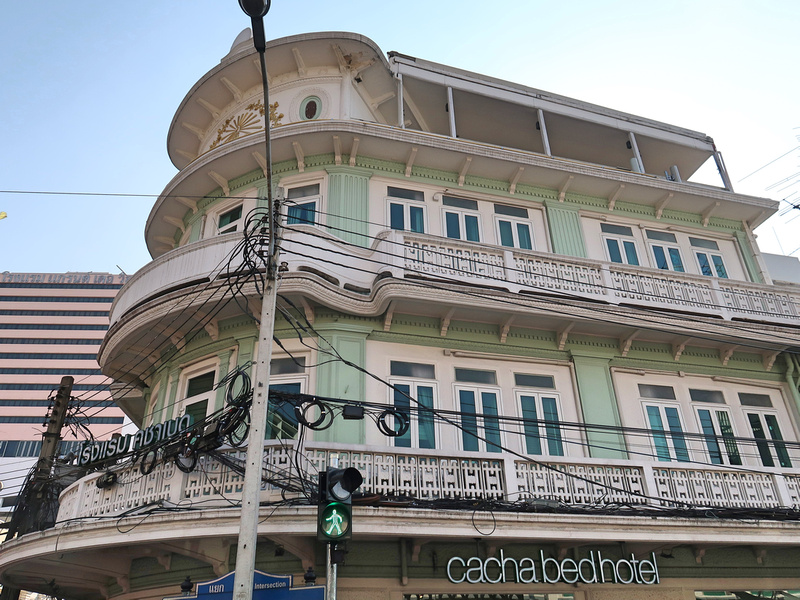 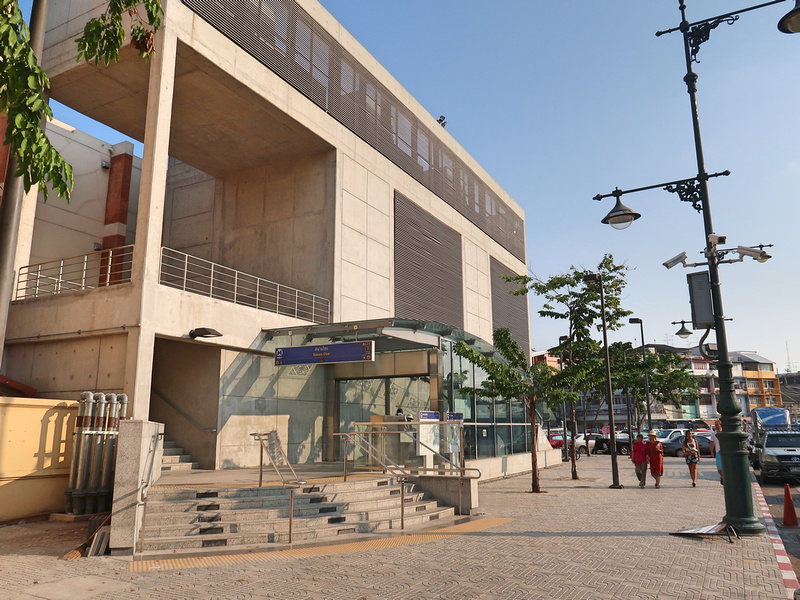 From Sam Yot I continued my old town wandering through to Sanam Chai MRT. This station will be the most convenient for visitors as it is near Wat Po and the Grand Palace. If you are a tourist staying on Sukhumvit Road you can now get a direct metro to the most important sites in Bangkok.

Also near Sanam Chai is the flower market area, and there are some nice old buildings by another canal. I hadn’t been down here for a while so I was surprised to see how many cafes and restaurants are around here (and not just tourist cafes). 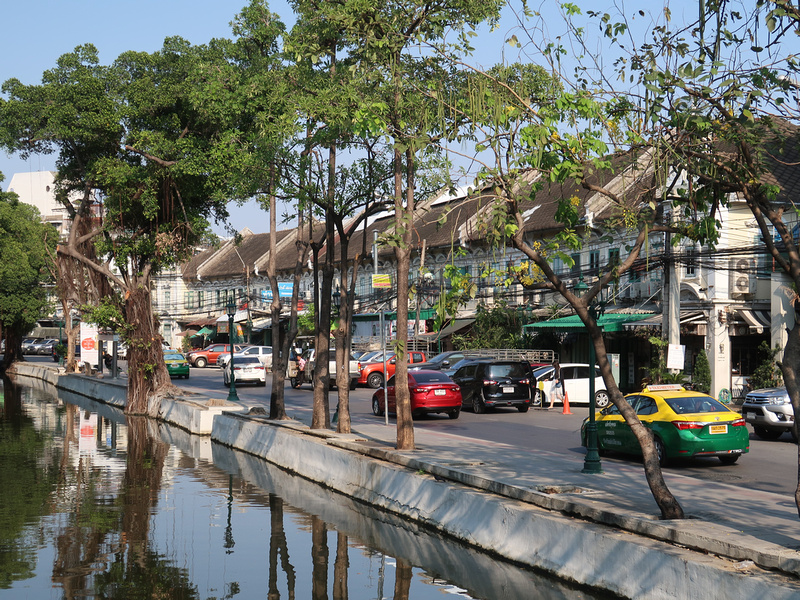 Out of all the stations this was the one I was most looking forward to seeing. The MRT had been showing photos of what the station would look like years before it opened. These sneak previews were great marketing as I knew I wanted to visit once it opened.

Sanam Chai is ornately decorated to reflect its connection to the royal institutions nearby. I was here late on Sunday afternoon and it was also busy. 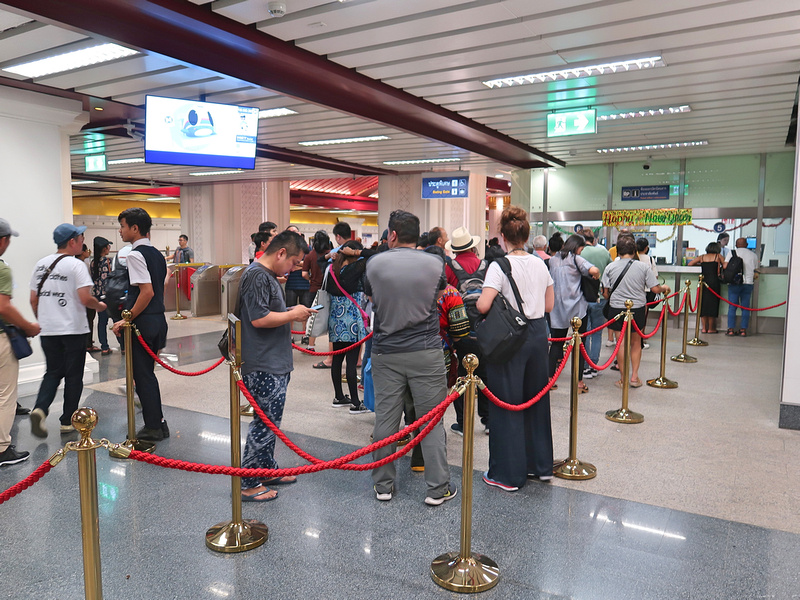 Thoughts on the new MRT extension 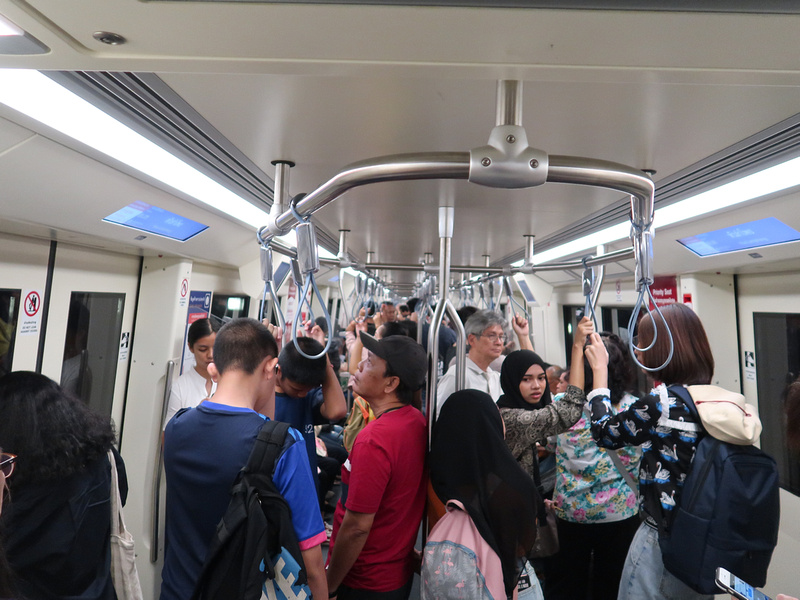 I’ve been visiting Bangkok nearly every year since 2005 and this is the first inner city metro line I’ve seen open during that time. The old city stations look as good as there were promised to be, and I expect there will be more urban regeneration projects in the old city.

One thing that I wish they could have addressed is the ticketing system. The MRT uses token for single use and a stored value card usable only on the MRT network. 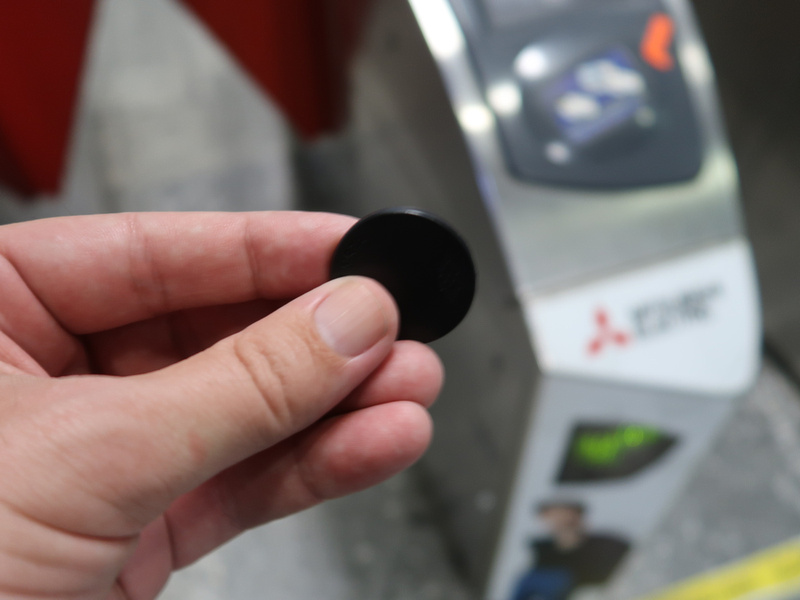 MRT Blue line opened in July 2004, and 2004 technology is ancient by now. Lining up for a single-use token seems so outdated. It would be an expensive operation to completely overhaul a ticketing system, so this is more wishful thinking. It would have been better to change it though while there was only one line. Now there are two lines, with two more under construction.

I kept thinking of my experience on the new Kaohsiung Metro, where you can just use your credit card via payWave if you can’t be bothered to wait in line at the ticket machine. Mobile apps and QR codes should be another option. 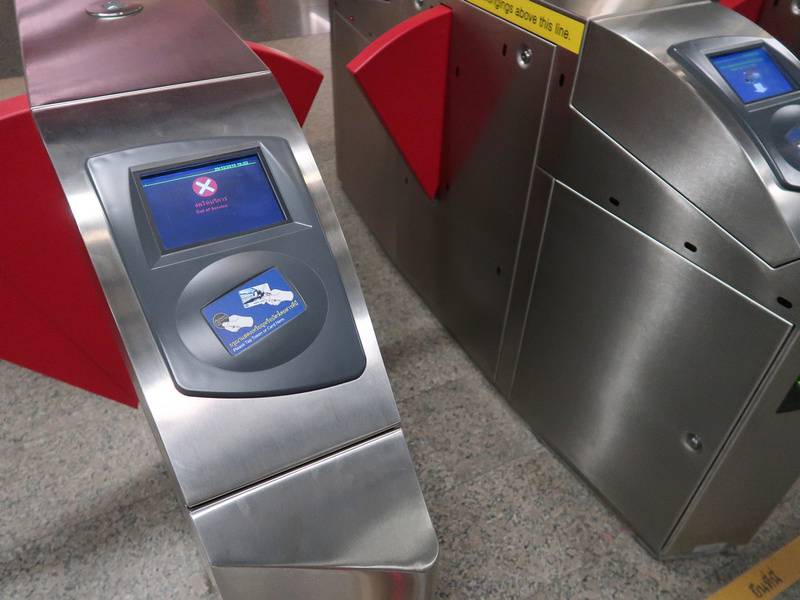 One thing that will at least make travel more convenient is the unified Bangkok transport card, known as the Mangmoom Card (Spider Card). As the BTS and MRT are separate private companies, they operate their own ticketing systems.

The Mangmoom Card will be able to be used on all forms of transport in Bangkok, similar to the Octopus Card in Hong Kong and the Pasmo and Suica Cards in Tokyo. The full rollout has been delayed for years, so every time I go back to Bangkok I always wonder if it is ready.

With the Blue Line now operating in the old city, the dream of an expanded Bangkok metro system is looking more like a reality.

In addition to the Blue Line there are two more lines that are planned for Rattanakosin. I’ve shown where these stations will be on this Google Map. I’ve just pinned stations related to the Old City.

To get a full picture view check out this Google Map of all of the proposed metro lines in Bangkok.

The Purple Line currently operates in the northwest of Bangkok, and it’s planned to be extended south though Rattanakosin.

For travellers who stay around the Khao San Road this will be a useful line as it will connect the Democracy Monument to the future Bang Sue grand central station. The Purple line will connect at Tao Poon station, which is about 15 minutes walk from Bang Sue, or change at Tao Poon for the Blue Line MRT to Bang Sue.

The Purple Line will also junction with Sam Yot on the Blue Line. Sam Yot was built in preparation for the Purple line extension, so it’s ready for this future connection. 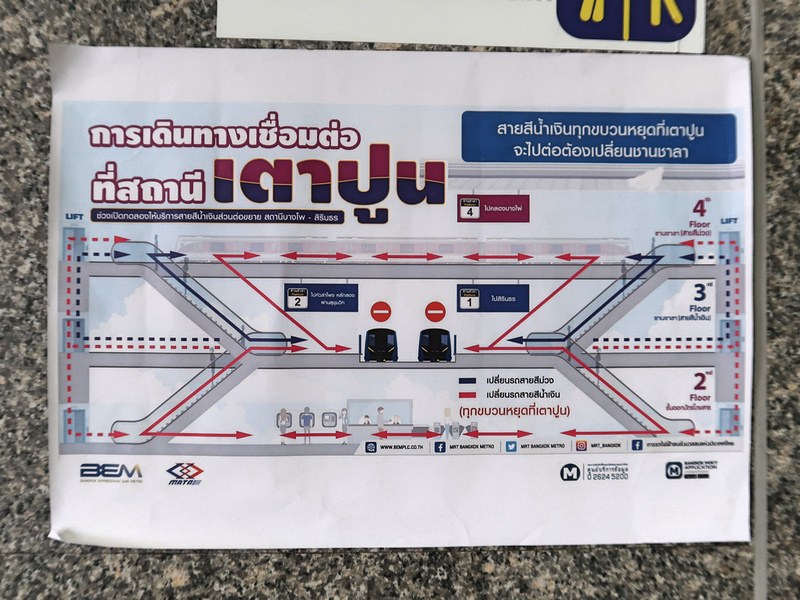 The other line being planned is the MRT Orange Line. The eastern stage of the orange line is currently under construction, though it’s not known when the western extension will be begin.

If this line goes ahead then it will put Khao San Road on the metro grid. The Orange Line will have a stop at Sanam Luang, which is basically next door to Khao San Road. From there you will be able to go to Yommarat Railway Station, where you can transfer to the future railway that connects the two airports of Bangkok. The Orange Line will also junction with Ratchathewi on the BTS Sukhumvit Line, and from there it’s an easy enough walk to Siam Square.

When I look at future metro maps I look for future developments around each station. If the Orange Line goes ahead and junctions with the Purple Line at Democracy monument, then land around this area will be even more sought after. I don’t expect any tall buildings here as there will be height restrictions near royal monuments. There is redevelopment plans for this area. One of the high profile land clearing disputes in Bangkok has been in Fort Mahakan, not far from the democracy monument. There is a plan to turn this into a park, though it’s not clear where the residents will go.

My next Bangkok transport report will hopefully be the Bang Sue central station – due to open in 2021.