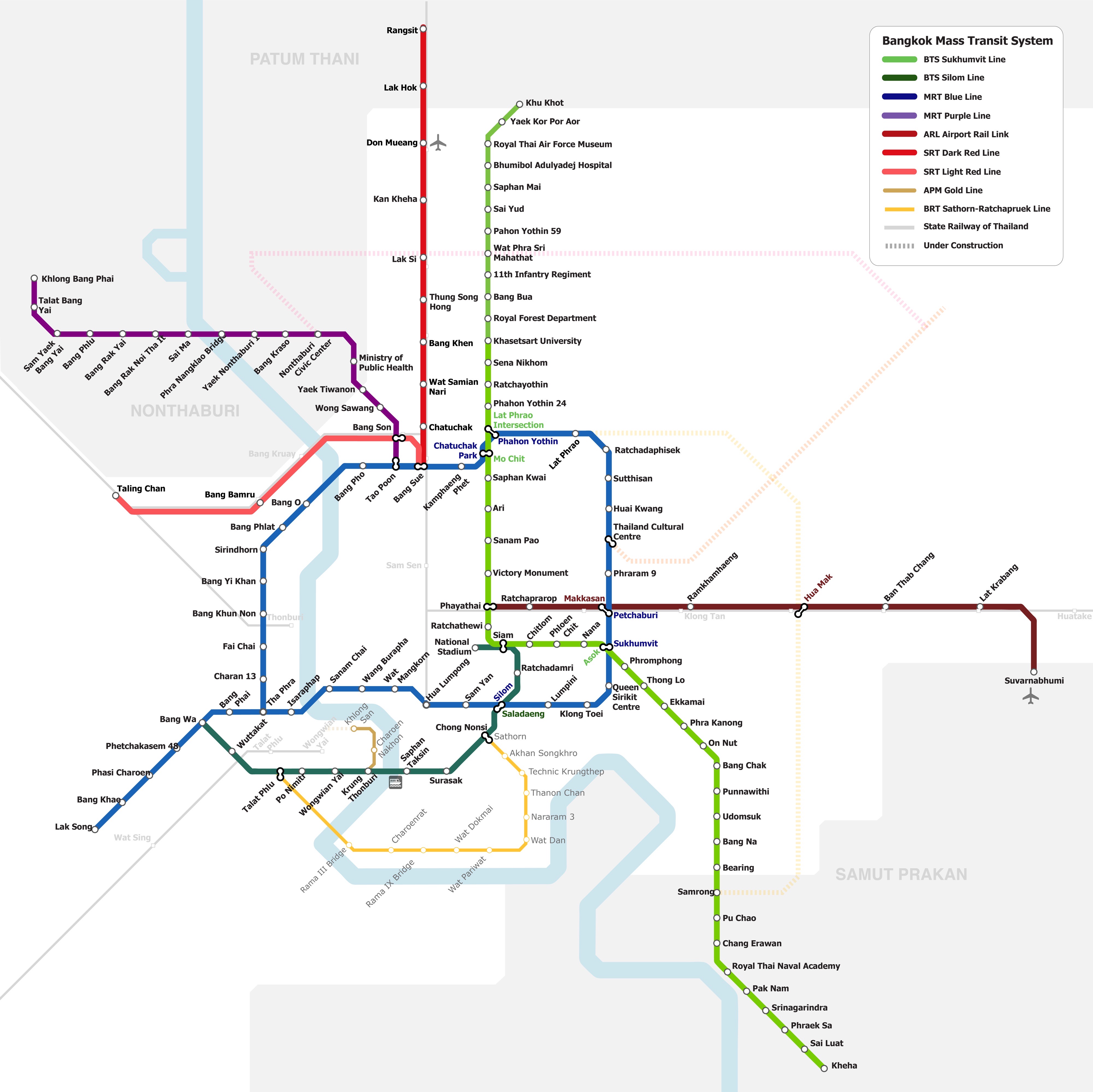 The Bangkok Mass Transit System began with the launch of two BTS Skytrain lines in 1999. There are now eight lines operating, with more lines planned and under construction.

The urban rail transit system of Bangkok is comprised of a mixture of railway systems operated by three different companies. There is no singular brand like “Bangkok Metro” for the network, and there is no official map of a unified rail system.

The lack of a unified map is the least of Bangkok’s worries though, as the different operators have not agreed to provide integrated interchanges. There is also no unified ticket system yet, so you need to buy a different ticket for each railway.

While getting around Bangkok has become much easier with the introduction of these new lines, it is useful to know about the different lines and ticketing systems. This guide lists all of the different railways that form the Bangkok Mass Transit System, including the official websites and maps from each company. 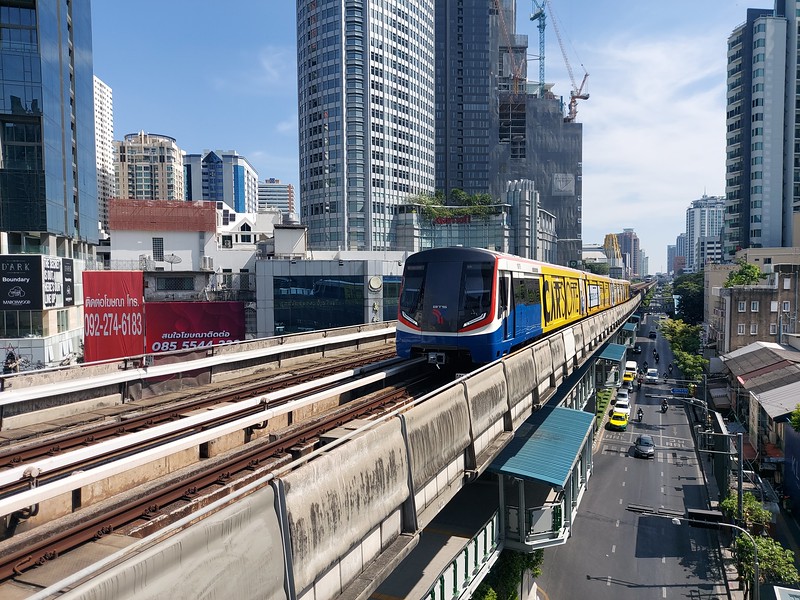 The BTS Skytrain was the first urban rail transit system in Bangkok, and it is most commonly referred to as the BTS or Skytrain. There are two lines which both opened in 1999:

The Sukhumvit line and Silom line meet at Siam, where there is a cross-platform interchange. Both lines have been extended over the years, and more extensions are planned. 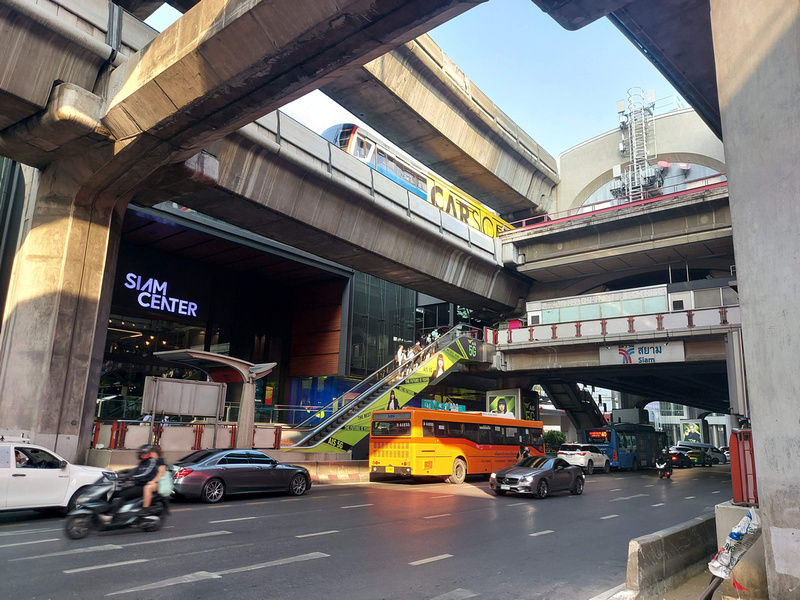 This line was built to connect the Skytrain system to the Icon Siam development.

The official BTS Skytrain map shows the two green BTS lines most prominently, with the the other systems represented with smaller lines.

Single BTS tickets can be bought at the station, or you can buy the Rabbit stored value card. The Rabbit card can also be used in selected shops around Bangkok. 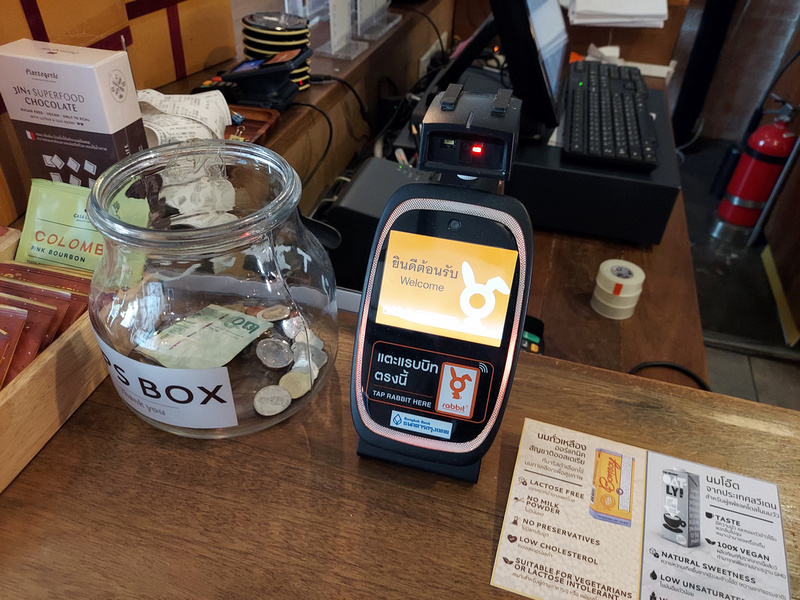 [Rabbitpay at a store in Bangkok.]

The MRT (Metropolitan Rapid Transit) is a mass rapid transit system with 2 lines: 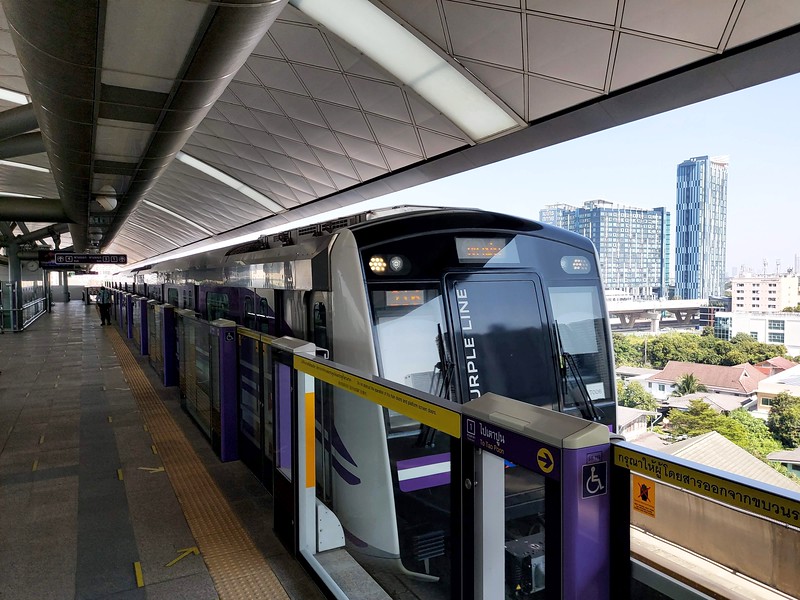 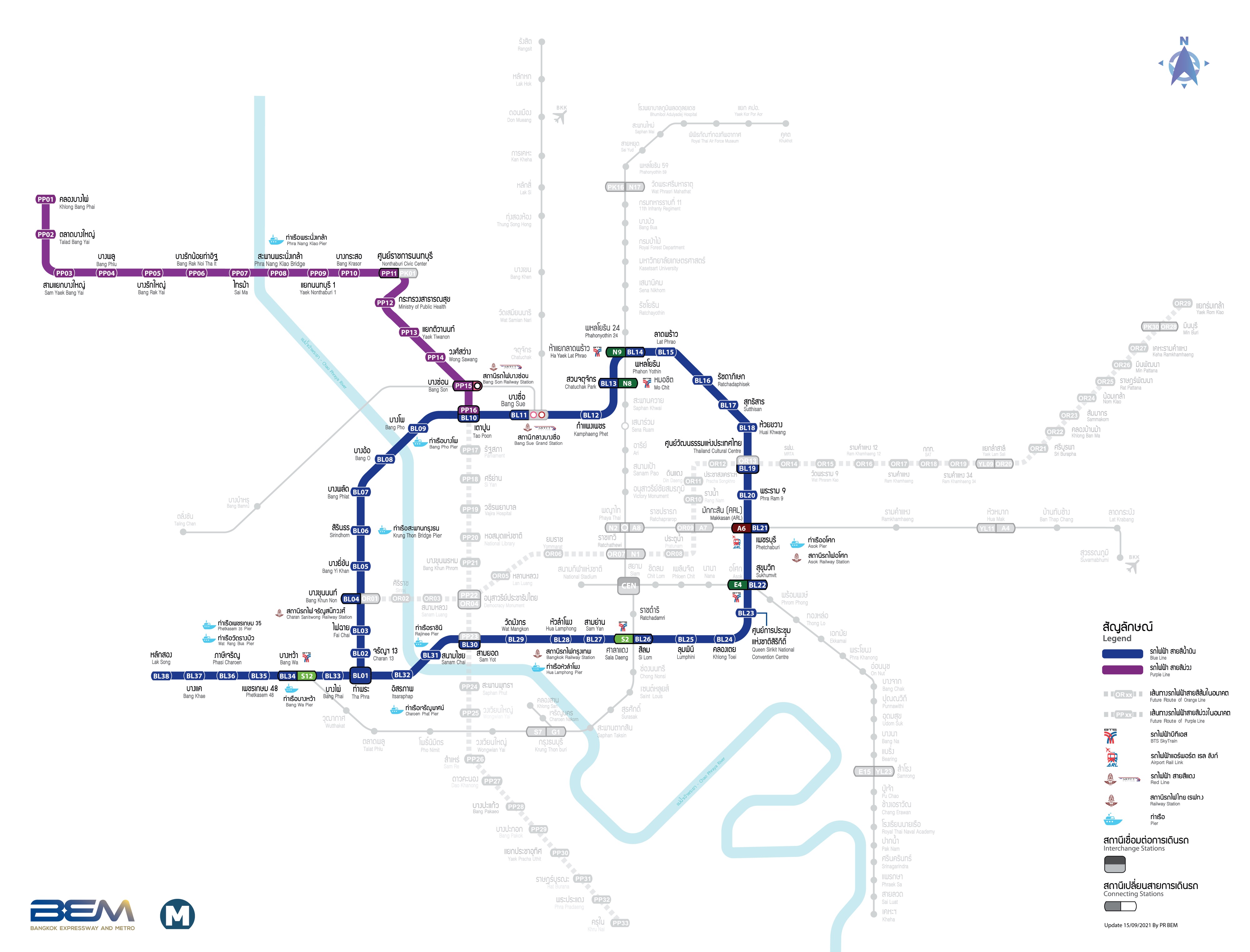 This map shows lines from all operators equally (unlike the BTS map which makes their lines bigger on the map). The map shown at MRT stations also has the future lines covered in grey stickers.

MRT tickets can be bought as single tokens at the station, and there is also a stored value card.

This is a commuter railway that serves the neighbouring provinces that form the Bangkok Metropolitan Region. The lines will be extended through Bangkok in the future, opening up more rail alternatives for Bangkok’s urban transit system.

The most useful line for visitors is the Dark Red Line to Don Mueang Station, which is connected by an elevated walkway to Don Muang International Airport. 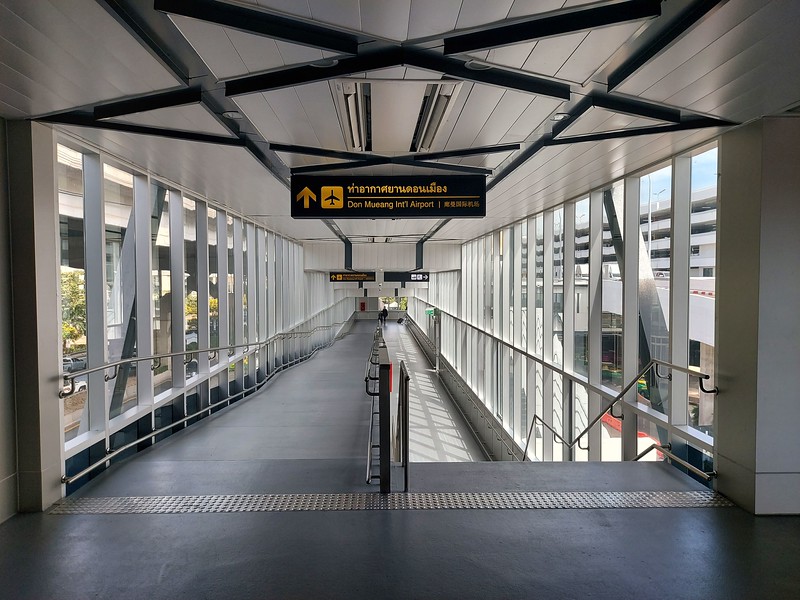 Tickets for the Red Lines are single tokens. Like the BTS and MRT, this is a separate ticketing system. If you are transferring from an SRT line to a BTS or MRT line, you need to get a new ticket.

The Airport Rail Link (ARL) runs from Suvarnabhumi Airport to Phaya Thai station. The line initially ran express and commuter services, with the express service also stopping at Makkasan Station. The express service is currently suspended, so the line has been reduced to a stopping-all-stations service. 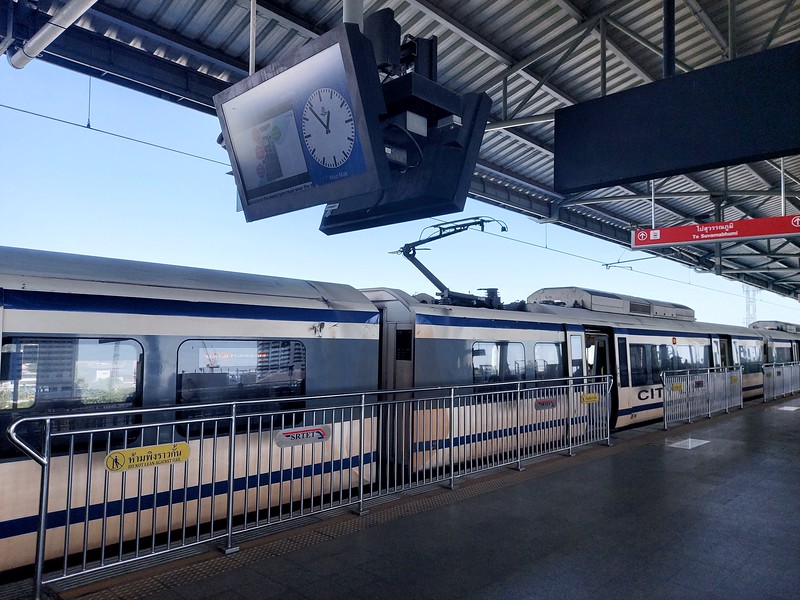 Makkasan Station was purpose-built as a remote airport terminal, where you could check in and have your bags checked in as well. The check-in service at Makkasan was eventually closed due to low passenger numbers. This line will eventually be replaced by the 3 airports rail link.

The Airport Rail Link uses tokens (like the Red Lines) and you cannot interchange with the BTS or MRT.

The BTS and MRT have produced separate maps that have their own style. There are some independent maps that show all of the lines, with the most useful map from Wikipedia.

The best map that shows the Bangkok Mass Transit System on a traditional metro-style map is by ExploreMetro. The full map can be viewed on the website, or via their app. 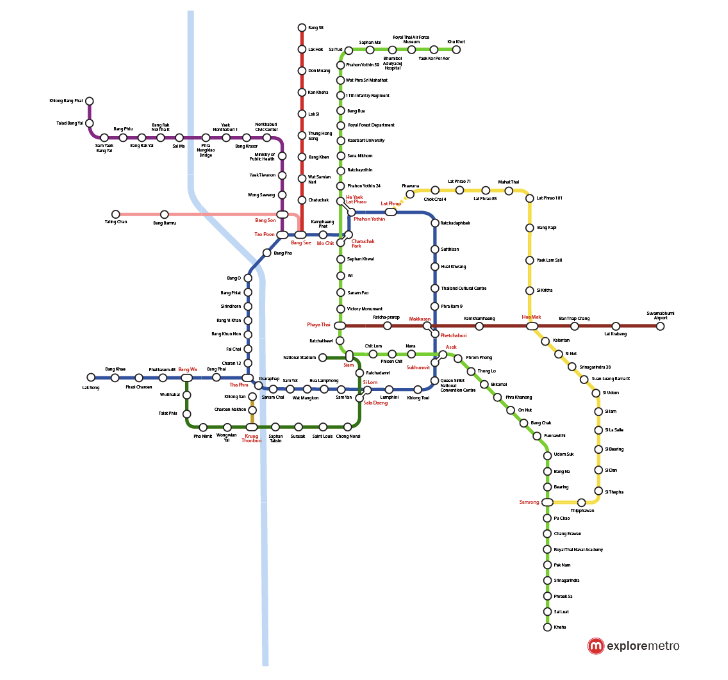 This maps by LivingPop is a clean transit-style map that resembles the BTS map, except that all of the lines are equal in size.

Another independent map is from Transit Bangkok. This map is now out of date, but I have listed it here as a reference. This guide is for current travel in Bangkok, so for simplicity and clarity, I have kept the future lines off this guide. If you are interested in the future lines you can visit the future Bangkok Mass Rapid Transit System Guide at Future Southeast Asia.