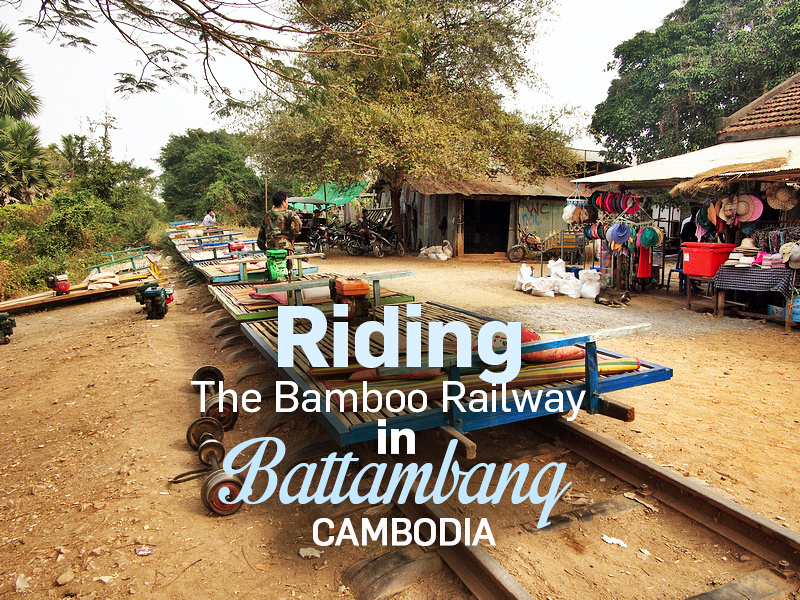 The bamboo railway is a makeshift railway in Cambodia that uses the old single line that runs between Battambang and Phnom Penh. In what was initially a way for goods to be transported has now become a fully-fledged tourist attraction. At the time of my visit I only saw foreign passengers on board and no freight.

The “railway” began after the Khmer Rouge fell in the late 70’s. With infrastructure in disarray makeshift trolleys (locally known as a ‘norry’) were made to transport goods and people along the dilapidated railway lines. They were initially powered by pushing a pole, and then motor engines were added.

There used to be norries operating all along the track, but for visitors the centre of activity is just outside Battambang on the track heading towards Phnom Penh. A tuk-tuk driver will take you there and wait for you for $5. The trip is $5 return sharing a norry, or you can rent the whole thing for $10. 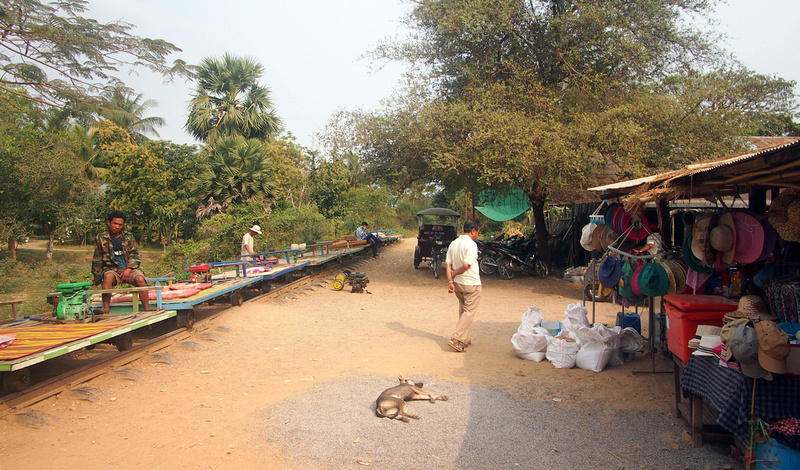 The norries are made with a bamboo tray that is sturdy enough to carry goods and passengers, and lightweight enough to be removed by two people. 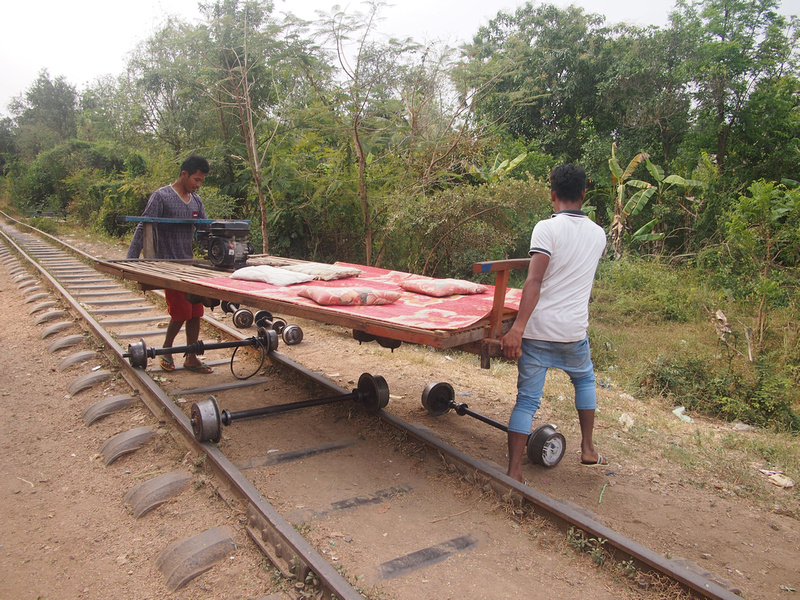 The rule is that the trolley with the least passengers disassembles and lets the other pass. Trolleys carting motorbikes are excepted. The two drivers take the bamboo tray and lay it to the side, and then remove the axles. It’s a quick process.

The day I went the rule was that a single trolley gets off the rails if there is a convoy of trolleys. On my trip there were ten trolleys behind us so the one trolley we met had to move. 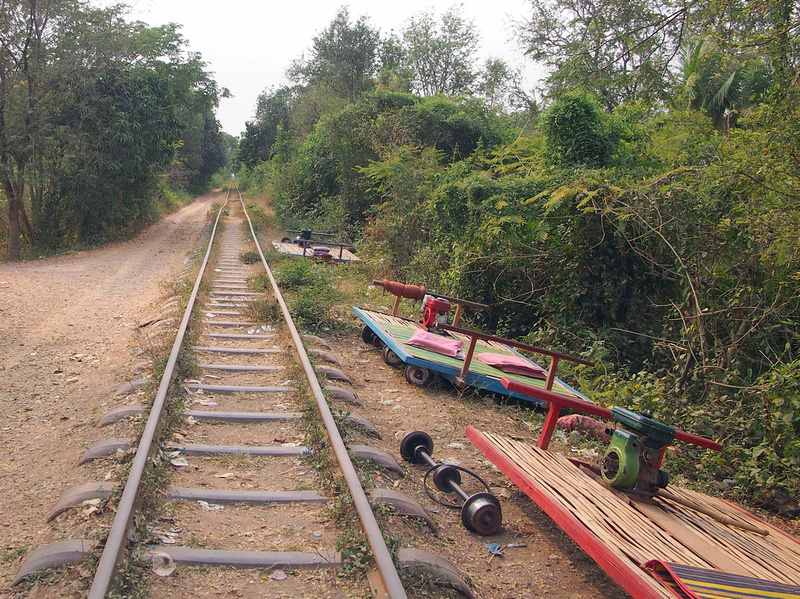 Little cushions are used for seats, so this is a good time to practice your lotus position. It’s a bumpy ride and the engine is noisy, but I didn’t feel like I was going to fly off. 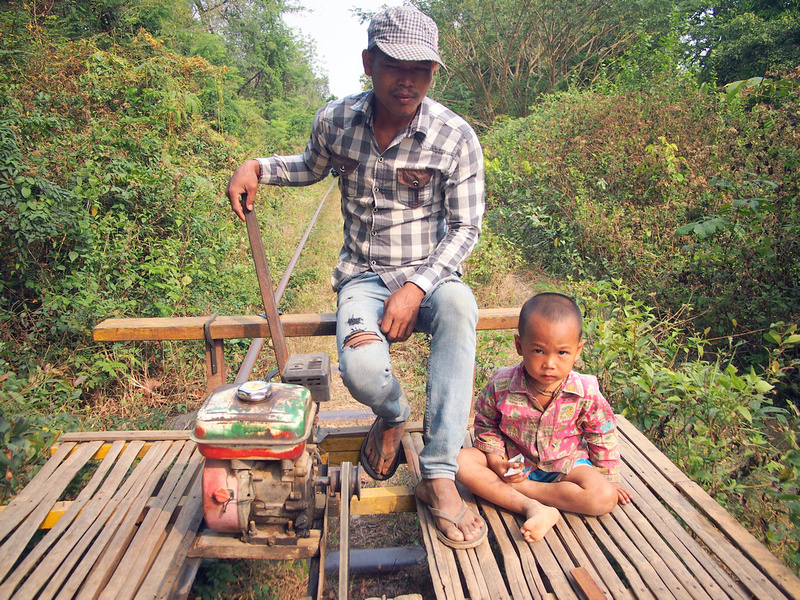 The trip goes for about 20 minutes and arrives a little village set up at the train station selling t-shirts and drinks. Beyond this station the line appeared to be in complete disrepair. 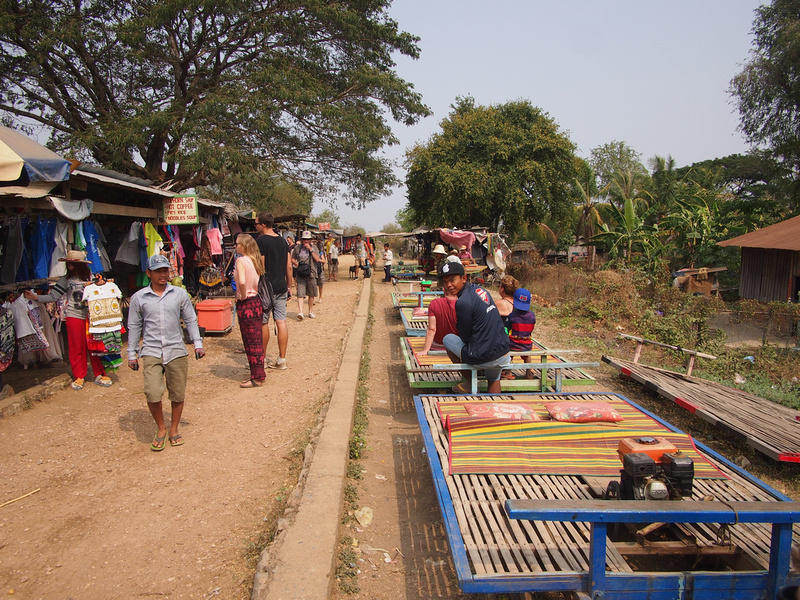 The drivers waited until the next batch of norries arrived before returning, but there was the occasional norry that we met head on, so we got to see the process of passing. 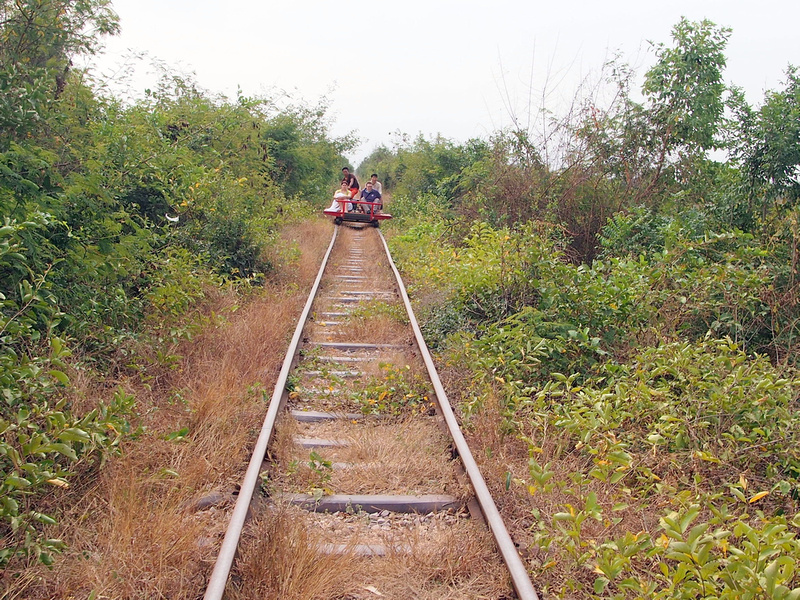 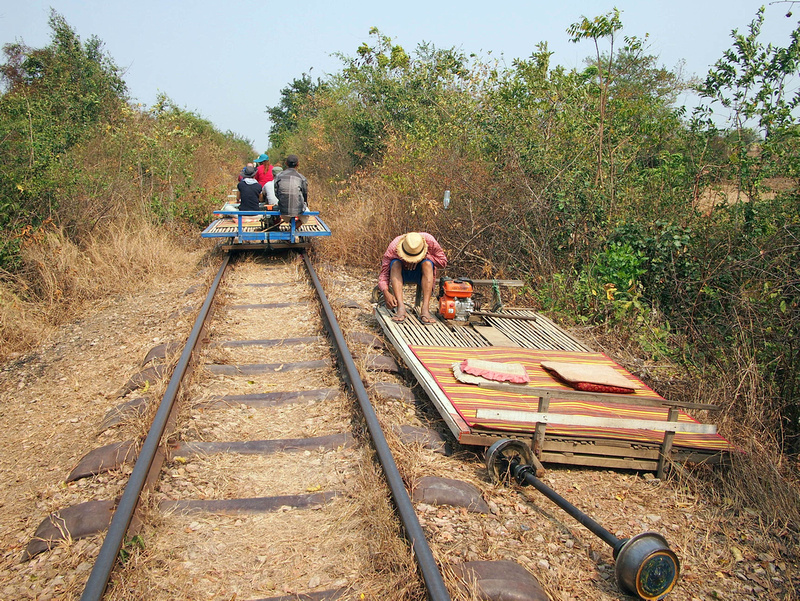 The track is so old that it is visibly wavy, and the gaps between joining rails are wide enough make a clackedy-clack at each section. There was a passenger train that slowly ran on this line, but that service was discontinued in 2009. 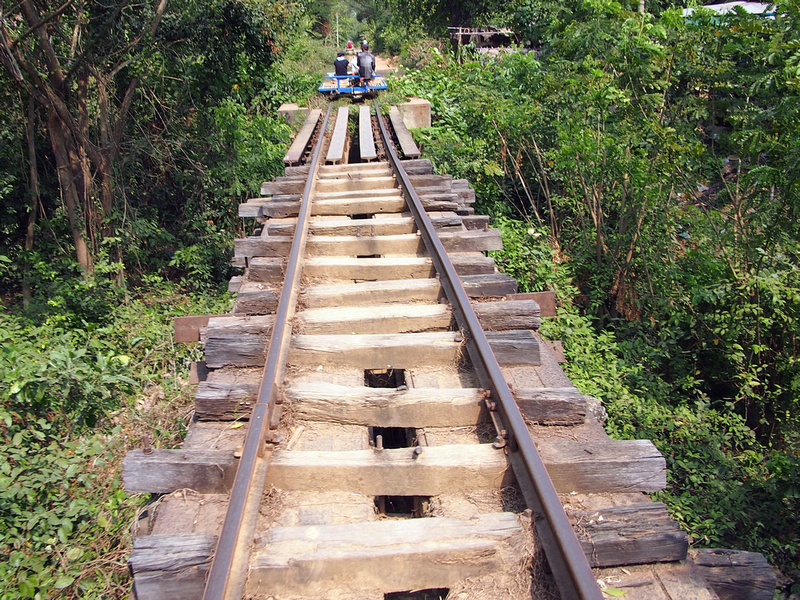 The whole trip takes an hour, with 20 minutes each way and a 20 minute break at the village. At the end an official will ask you to tip the driver.

The end of the line?

The Bamboo Railway is an interesting thing to do and a highlight of Battambang if you are a rail enthusiast or just wanting to experience something a little unusual. If you are planning to visit Cambodia then this is one of those things to do before it is gone. Apparently it will be closing soon as the overhaul of the nations railway makes its way to Battambang. I have since read that they have been saying this for years, so who knows.

It has become such a profitable little business that there is talk of relocating it. I couldn’t find if that meant that there will be a completely new railway laid for the Phnom Penh-Battambang line, or if they will lay a new bamboo railway track (neither of those ideas make sense).

Battambang is approximately halfway between Phnom Penh and Bangkok, and the plan is to eventually have a train that runs between the two capitals. This is part of a grand master plan that will connect China with Singapore, via Vietnam, Cambodia, Thailand, and Malaysia.

I won’t be sad of its demise though as it seems like a celebration of failed infrastructure, and I would gladly prefer to see a functioning passenger train that runs between Battambang and Phnom Penh take its place.