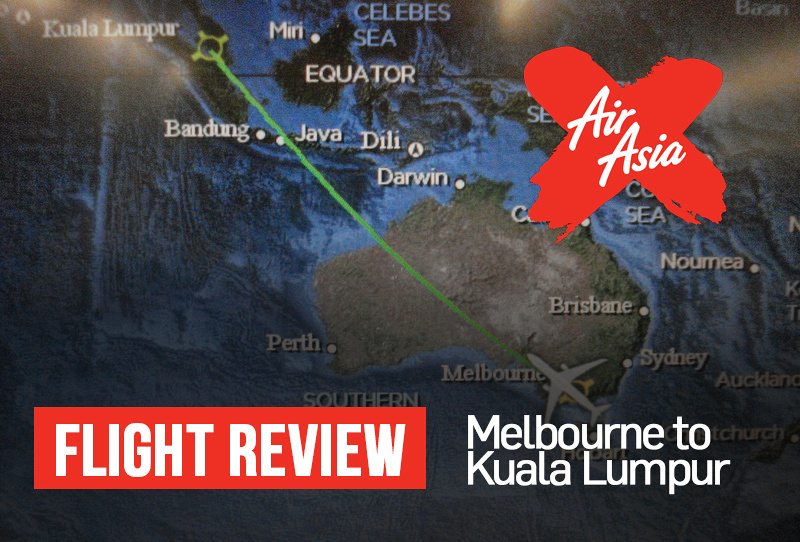 AirAsia X is the long haul brand of Malaysian low cost airline AirAsia. They fly from Kuala Lumpur to the Gold Coast, Perth and Melbourne. They also fly to London Stansted, making it the first low cost airline to fly the whole length of the kangaroo route.

AirAsia X began flights to Melbourne in 2008 so this was my first chance to try them out.

I was curious to fly this relatively short sector to see if I could handle flying a whole day to London on a low cost airline. Would the low fares on offer (up to half the price of a full service airline) offset the lack of frills you would usually get on a regular Australia to UK flight?

As I was flying to see how cheap I could get the ticket, I ordered none of the optional extras. I bought my ticket when flights to Melbourne first went on sale at headline-grabbing prices. The only optional extra I purchased was checked luggage. This was my return ticket breakdown:

My total ticket was 412 AUD for two 7.5 hour flights. Normally flights from Melbourne to KL would run at about 1000 AUD, so this was a bargain price.

There was ticket drama before I even left with two rescheduled dates. I got a text message on the 4th saying my flight has been moved from the 12th to the 14th. 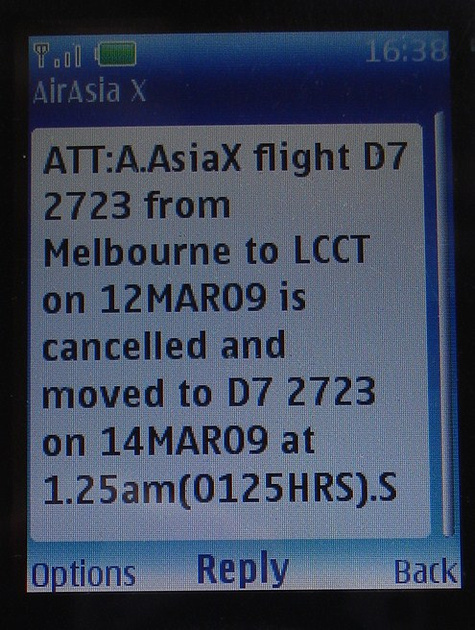 Then on the 8th I got a message saying that my flight has been moved to the 13th. And I had just changed my accommodation in KL after the the first change, so I had to change my plans again. 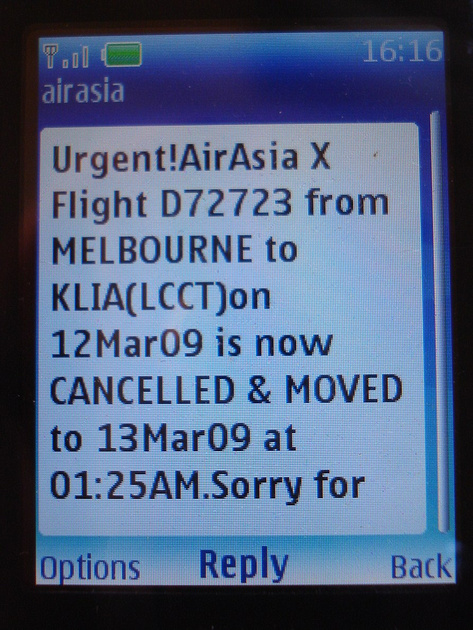 They sent me a new e-ticket, but by now I wasn’t confident about flying until I was actually onboard. Seeing that my AirAsia flight was already rescheduled twice I got to the airport early to make sure I had a seat. I needn’t have worried as the flight was 1/3 full. That probably explains why the other flights were cancelled.

If this happens while you are overseas you should check what is covered on your travel insurance if you end up out of pocket by a considerable amount.

The first thing I noticed when entering the plane was the size of the seats. The seats are noticeably slimmer. The cabin of the Airbus A330 is arranged in 3-3-3 format. Qantas, for example, use a 2-4-2 seat configuration on their A330 aircraft. AirAsiaX have a nine seat row compared to an eight seat row. That means each seat had to give up 1/8th of width to accommodate the extra seat. I noticed that lost 1/8th when I sat in the seat. 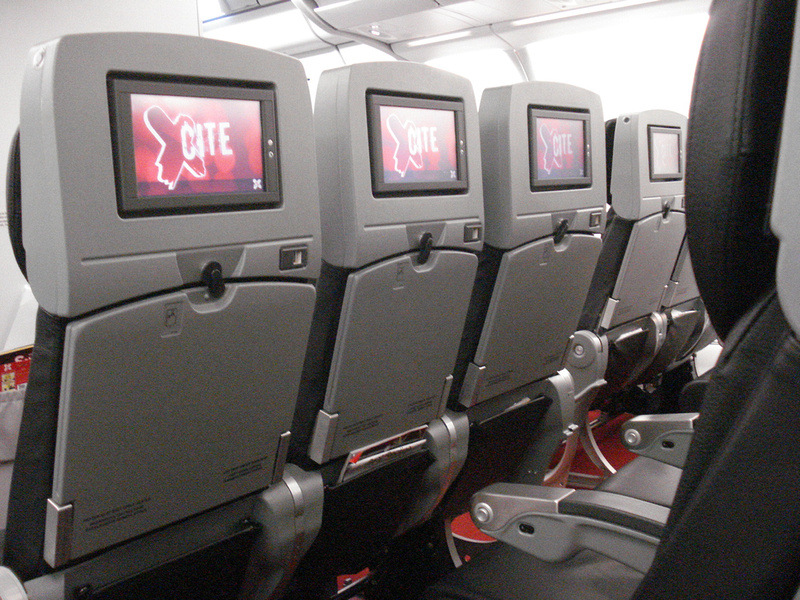 As a low cost airline the pricing is a la carte style, so you buy a cheap seat and pay for any extras you fancy. You can pre-order extras when you are booking your ticket or purchase items onboard. 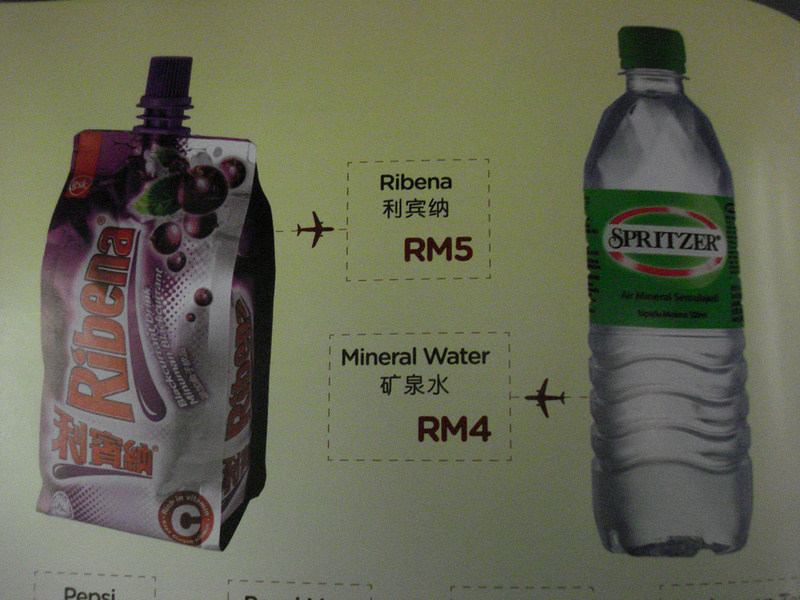 Food and beverages are available for sale (there is no free water), as well as blanket and pillow packs and a video entertainment pass. The pass gives you access to the inflight entertainment, consisting of movies, TV shows, music and games. 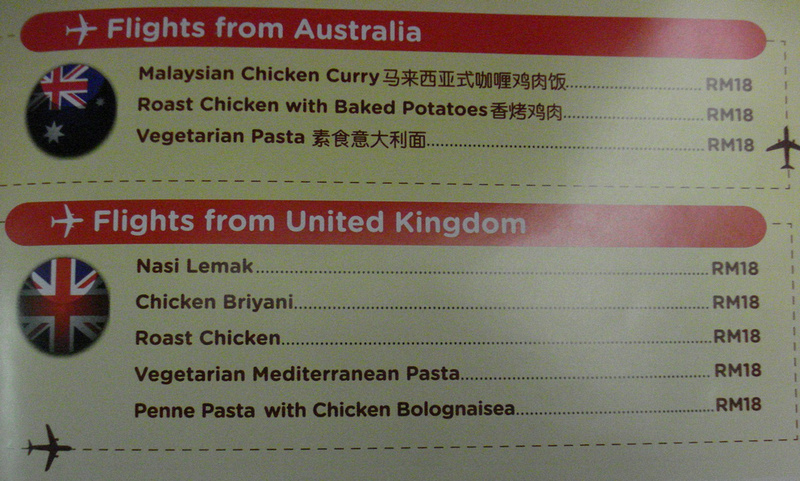 AirAsiaX has inter-seat chat available on some of its flights. The service is free, even if you don’t buy the entertainment service.

To get started select the chat option, then select the seat of the person you want to chat with. 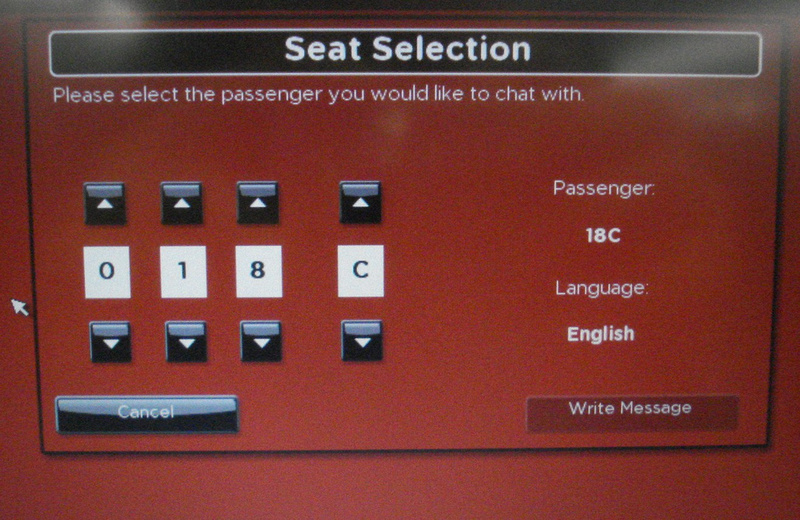 You then get a message box where you type via the touch screen. 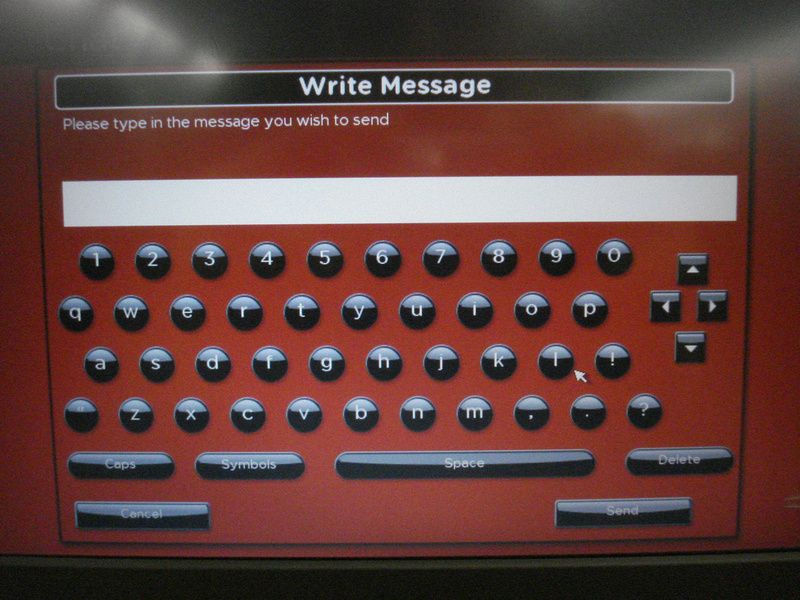 When you send the message the recipient will get a message like this. 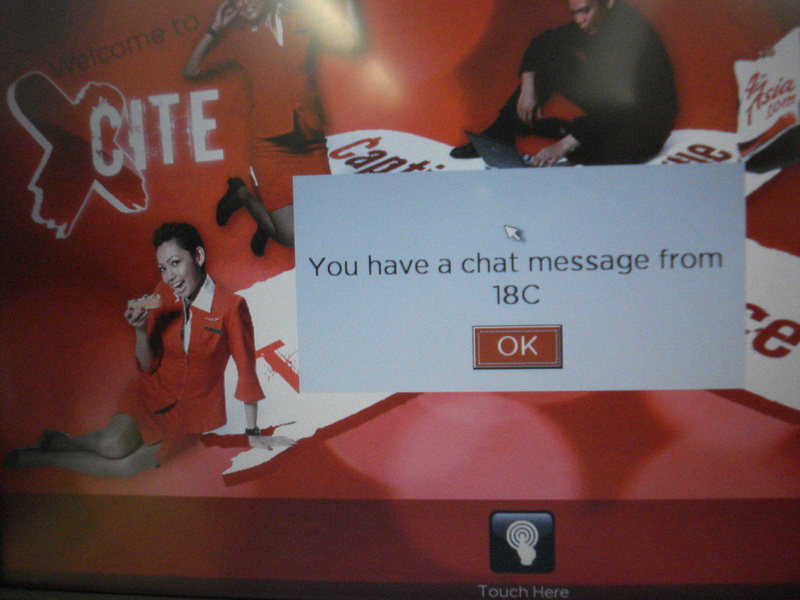 I guess it would be handy if you have a friend sitting in another row, but I wonder how it goes with talking to strangers?

I was flying solo so I had no one to try it out on. I don’t know what the inter-seat chat etiquette is with sending a message to a stranger. Do you walk up and down the isles first checking out anyone you fancy and note down their seat number?

The flight was overnight and I usually can’t sleep on planes, so it was pretty boring without movies. Other than that the flight was fine. The main thing is I’m now in Southeast Asia with an extra $500 dollars in my pocket from the savings on the flight. This is what I will remember long after I have forgotten the details of the flight. 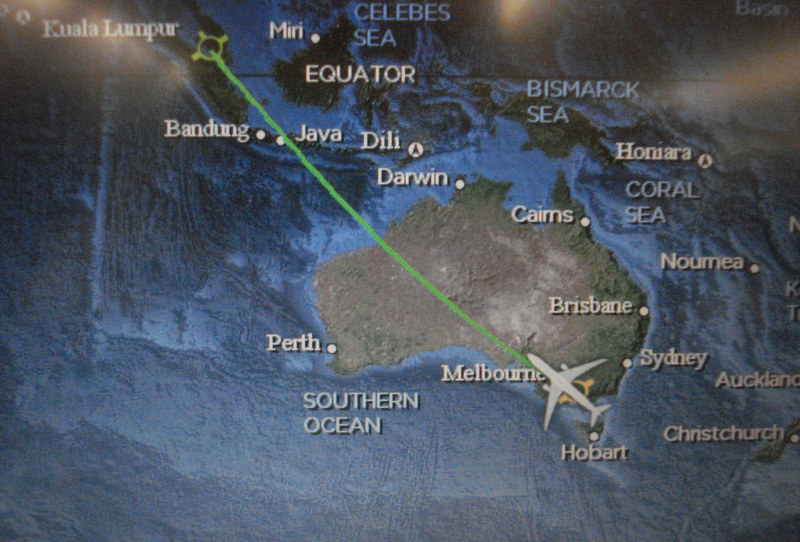 So would I fly from Melbourne to London with AirAsia X? It depends mainly on the price and on how badly I wanted to go to the UK/Europe. If I was to save $1000 on a ticket then I would probably do it. Long haul flights are generally mind numbingly tedious anyway and I can’t sleep in economy seats, but I would buy the entertainment access as it would be too hard without the distractions of watching movies.

If it was only a couple of hundred dollars difference between AirAsia X and a full service airline then I would take the latter.

Search for cheap flights with Skyscanner, which includes AirAsiaX in their search results.