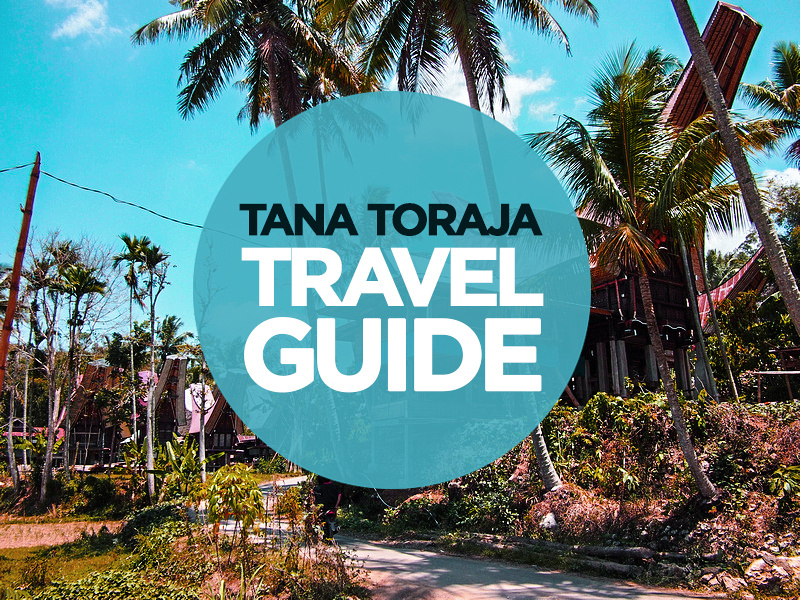 Tana Toraja (also referred to as Toraja) is a region in South Sulawesi, Indonesia. It is a landlocked regency and it is famous for the Torajan homes (Tongkonan) and traditional funeral ceremonies.

For the purpose of this guide I have listed the region rather than an individual town, as most of the sightseeing involves driving around numerous villages. 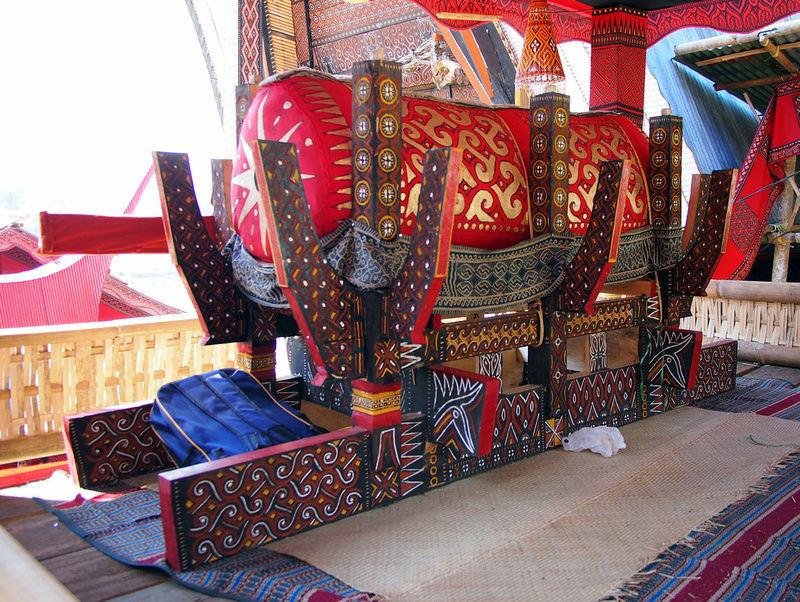 [This section contains photos of animal sacrifice, so if you prefer not to read may I suggest reading about my plan for saving the pandas of Chengdu.]

The funeral ceremonies of Tana Toraja are among the most elaborate in the world. There is a season for the ceremonies, so the funerals are held weeks, months, or sometimes years after death. The body will be kept in the family home until funds are raised to hold an appropriate ceremony.

Torajan funeral ceremonies are held during the dry season, from June to August (some sources say through to September). I arrived in Rantepao on September 3 and there was a funeral taking place the next day. I don’t know how far into September the funeral season lasts so go earlier to be sure.

If you are here during funeral season ask at your hotel if there is a funeral (they will most likely tell you anyway). I walked around Rantepao and found a guide who would take me to the funeral, as well as driving me to the burial sites in the region.

You can go to the funerals by yourself if you have your own transport. For me it felt more appropriate that I went with a guide who knew the family. Before we went the guide suggested to buy a carton of cigarettes as a gift. Smoking is an acceptable habit in Indonesia is so it’s not an inappropriate gift.

The funerals are held in stages, and the day we went was animal sacrifice day. A big funeral has as many as three hundred buffalo. The Torajans are a Christian minority (with a dash of animism), so pigs are also on the menu in this part of Indonesia.

The funeral we attended was a smaller one, with “only” seven buffalo being sacrificed that day. We arrived and met the host family, where I presented the cigarettes to the patriarch. we sat with the family and drank Toraja coffee while waiting for the sacrifice to begin.

The ceremony began with a buffalo being lead to the open area in front of the coffin platform. I was surprised with how festive the occasion felt. I was expecting it to be more somber. Instead, the crowd was cheering and laughing as each buffalo was brought out. 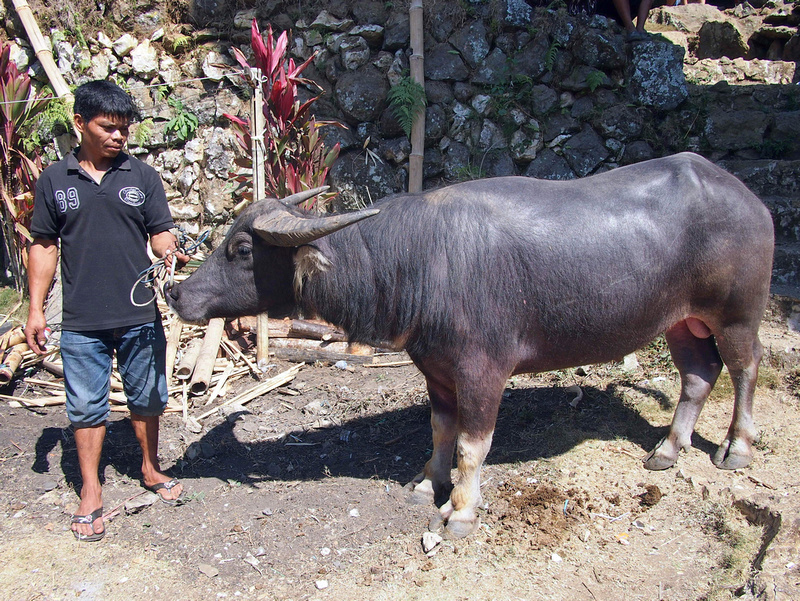 The first blow to the buffalos throat brought on a loud cheer as the buffalo staggered with blood spraying everywhere. The butcher found his footing and struck the final blow. 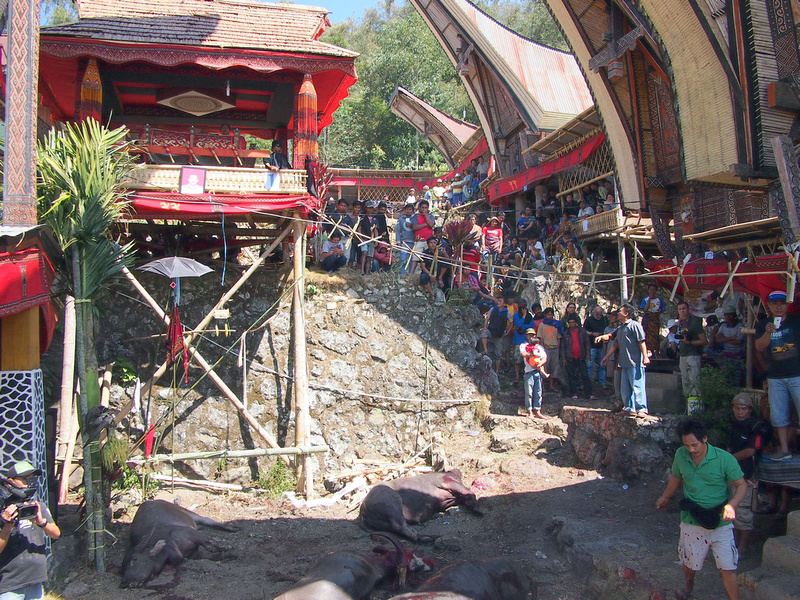 Each buffalo was left where it fell while the next buffalo was brought out for slaughter. One of the buffalo burst out of the grip of the butcher and careened wildly toward the crowd.

After the final buffalo fell the men began the task of butchering the carcasses. 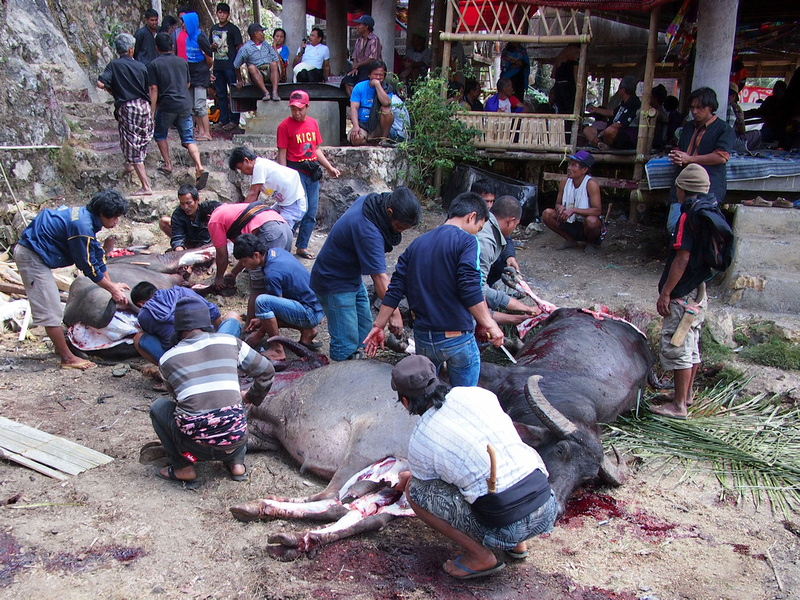 If you can’t time your travels to be here for funeral season (or if you don’t want to see it) the landscape alone is worthy of a visit. The combination of Tongkonan homes in the rice fields with the mountainous backdrop is a beautiful sight. The burial sites throughout the area make for a good reason to drive around and enjoy the scenery. 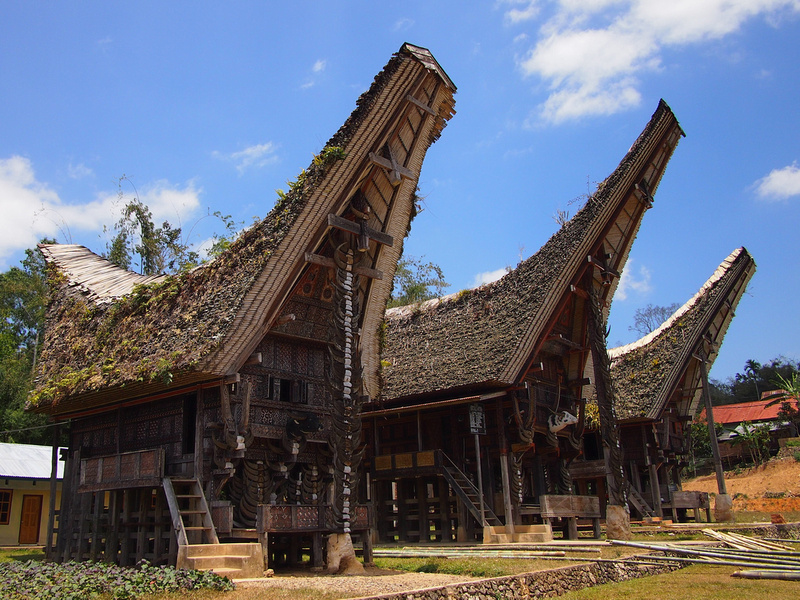 At Tampangallo is the “natural grave” site, where coffins are stacked in crevices of the cave. Next to the coffins are carved wooden figures. 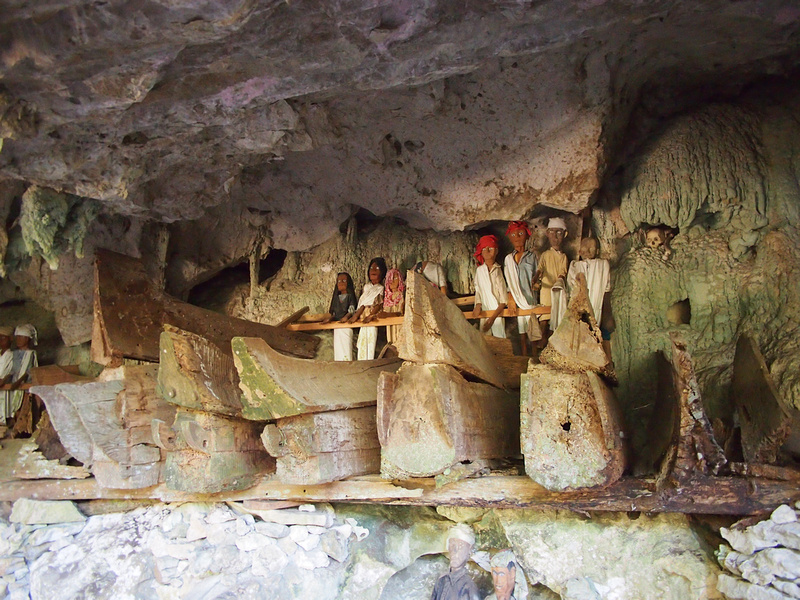 There are also piles of bones throughout the cave. 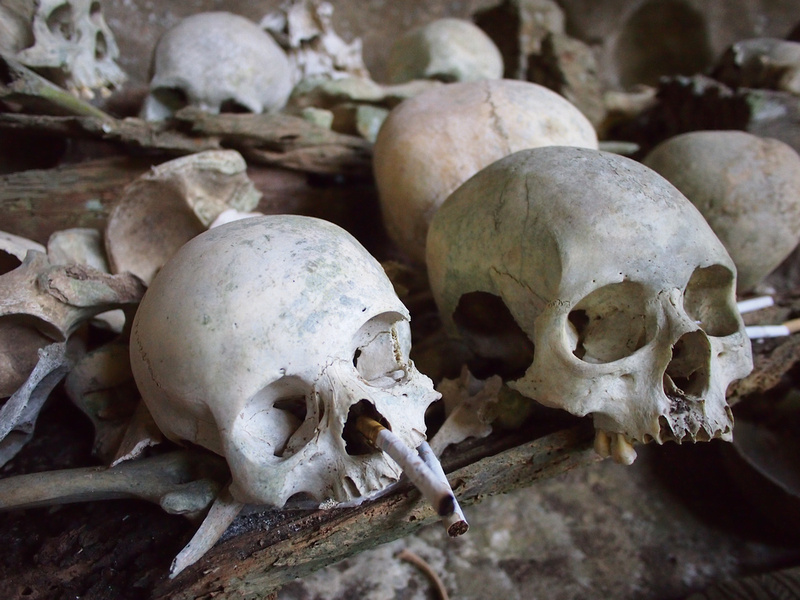 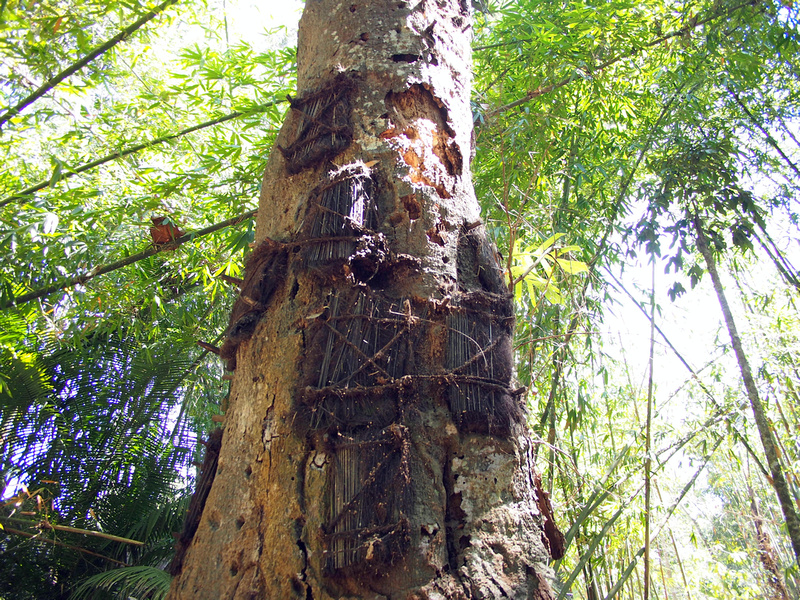 At Kembira is the burial tree for babies. The little niches carved into the tree are the saddest of all the burial sites I saw. There is a 20,000 IDR charge to visit this tree, which makes it feel like a tourist trap. 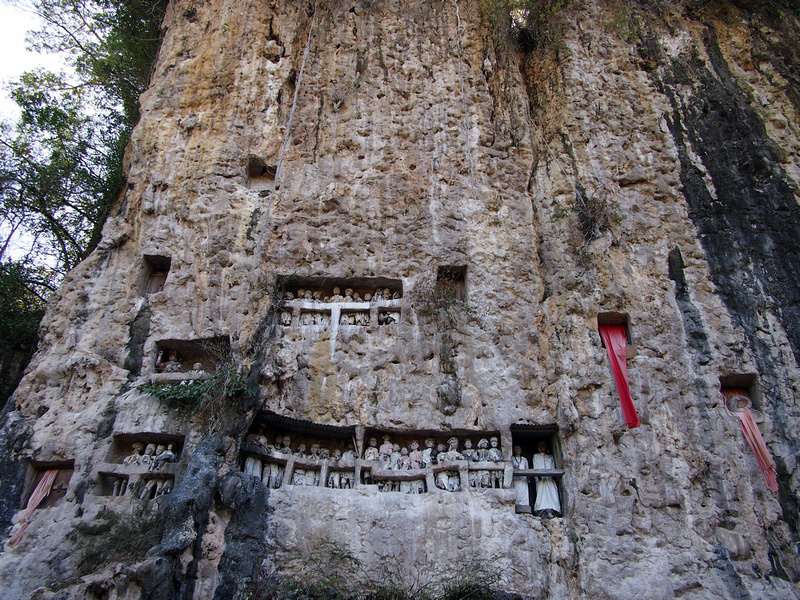 Around Tana Toraja there are cliffs with niches carved into them for burial. 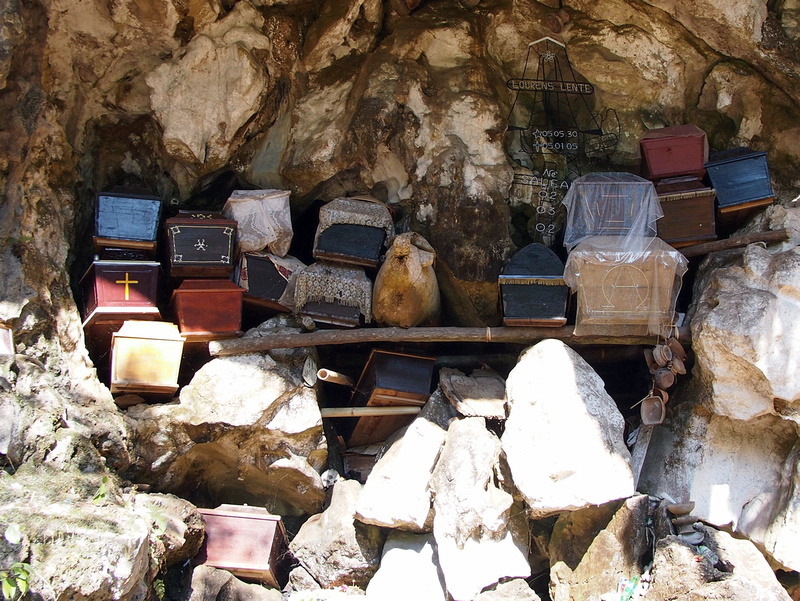 Londa is a grave site with cliff and cave burial sites. Ignore the touts who say you need a guide to see the cave.

For visitors the best place to stay is in Rantepao as it is the biggest town with the most hotels/guesthouses. Another option is Makale (the capital) but there aren’t as many hotels here.

I stayed at Riana Homestay, which is a typical budget guesthouse with basic amenities. The cheap places aren’t on booking sites so the best option is to look when you arrive.

If you prefer to book online or stay in a hotel with a functioning bathroom then search here for hotels in Tana Toraja.

Bringing out the dead – In addition to the funerals, every three years bodies are exhumed to be cleaned and redressed. I’m not sure if this process is open to the public, or if it’s ethical to attend.

Funeral tourism in Sulawesi: Is it ethical? – A question I asked myself, written by Lydia Tomkiw.

Life and death in Tana Toraja, Indonesia – Article and photos by Chris Dunham.

Getting to Tana Toraja

Bus
There are several bus companies that ply the Makassar – Toraja route. The trip from Makassar to Makale takes 8 hours, and 9 hours to Rantepao. The buses I travelled on were very comfortable “Executive” or “VIP” buses, with big, comfortable seats that recline, and plenty of leg room.

I was concerned to be on such a long bus trip but it was one of the nicer buses I’ve used in Indonesia. It appears that the best buses are being used on this popular route, so any travel north of Toraja won’t be as luxurious. 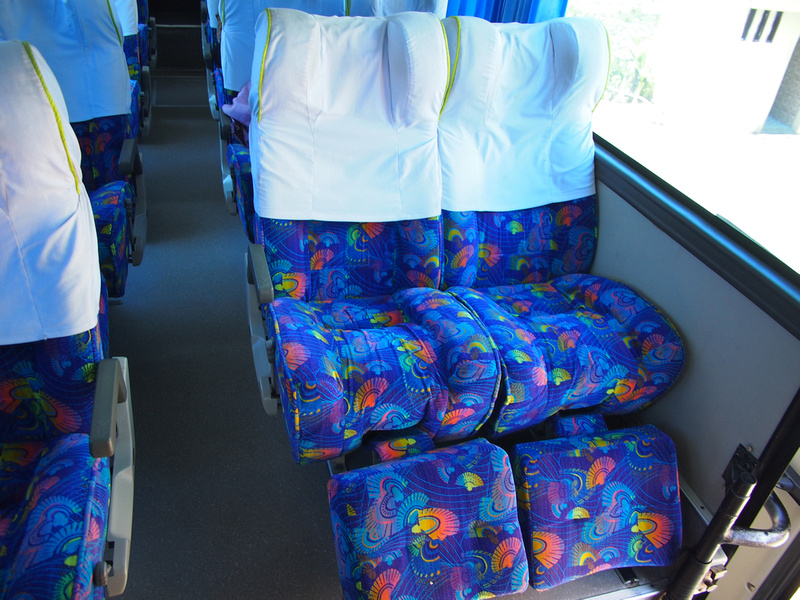 I travelled with Litha & Co from Makassar to Rantepao. I bought the ticket at their office at Jl. Gunung Merapi 135. On the way back I traveled with Manggala Trans and a ticket was 130,000 IDR.

Flights
Pongtiku (TTR) is a small airport that serves the Tana Toraja region. Remember that this is Indonesia, where regional airlines go broke, crash, or cancel flights at a moments notice. I saw at Makassar Airport that Aviastar fly there, but a test booking on their site didn’t work.

Check the Pongtiku Airport Wiki to see if there are airlines currently flying there.

Toraja: Misadventures of a social anthropologist in Sulawesi, Indonesia – By Nigel Barley.

Lonely Planet Indonesia – Good coverage of what to see, and how to get in and out of Toraja if you are travelling around the rest of Sulawesi.