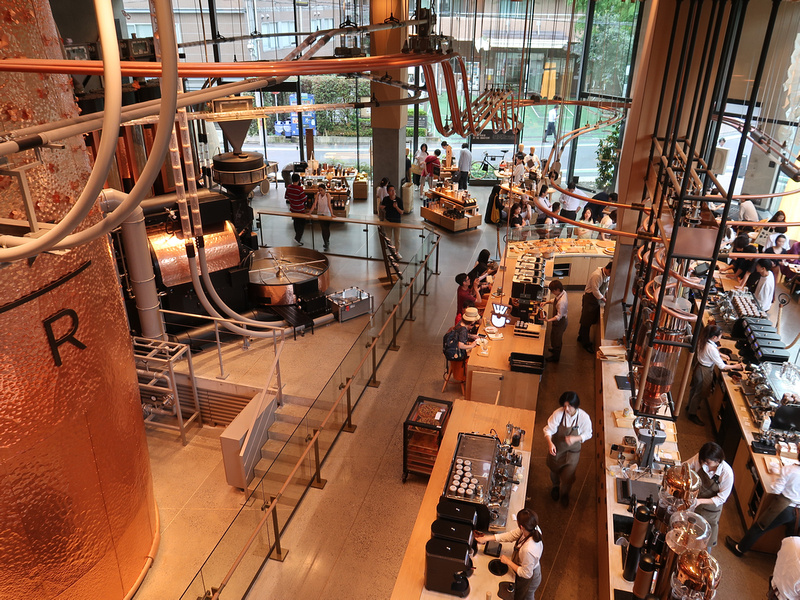 Here at Nomadic Notes I like to make lists of cool independent cafes to visit in cities of Asia. I’m not against visiting chain cafes either, so when I saw that the world’s largest Starbucks store opened in Tokyo I had to pay a visit. 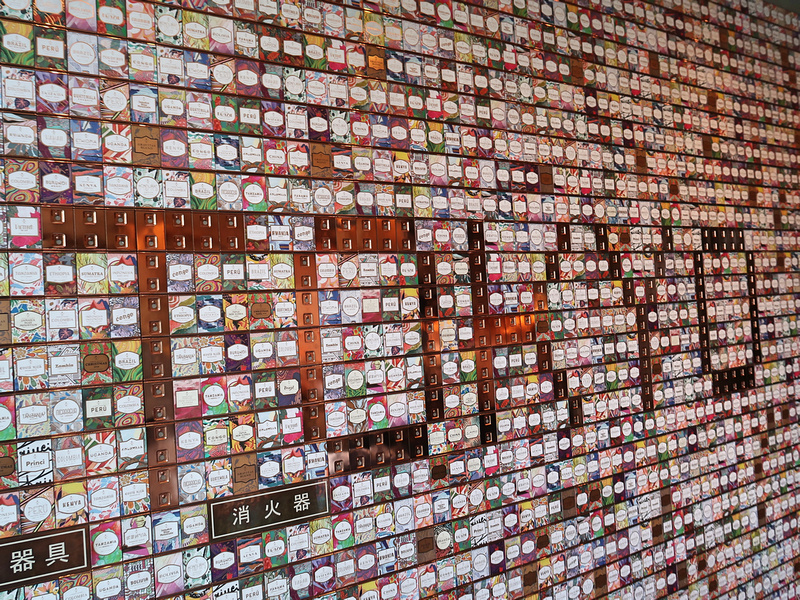 Before this visit I had been to what was at that point the second largest Starbucks, at Central World in Bangkok (the previous biggest being in Shanghai). The Bangkok branch was impressive, but it now looks like a small branch store compared to the Tokyo edition. 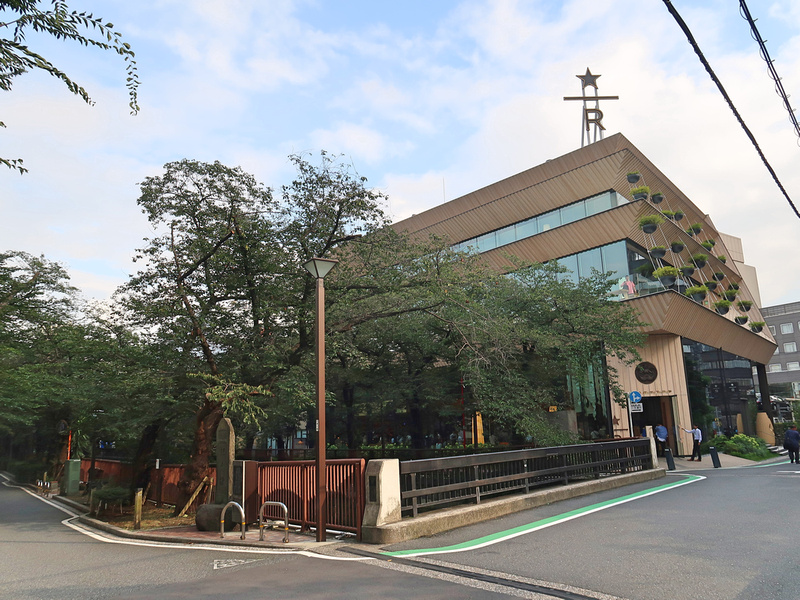 Starbucks Reserve Roastery Tokyo is about 20 minutes walk from Shibuya station, which was where I walked from. There are closer train stations though, because there are train stations everywhere in Tokyo. The Shibuya area would have been a more desirable area, but after you see the size of the property you would not be wanting to be paying for Shibuya rent on a place this size.

The property is in a stand-alone building by the Meguro River, and it occupies the entire building. 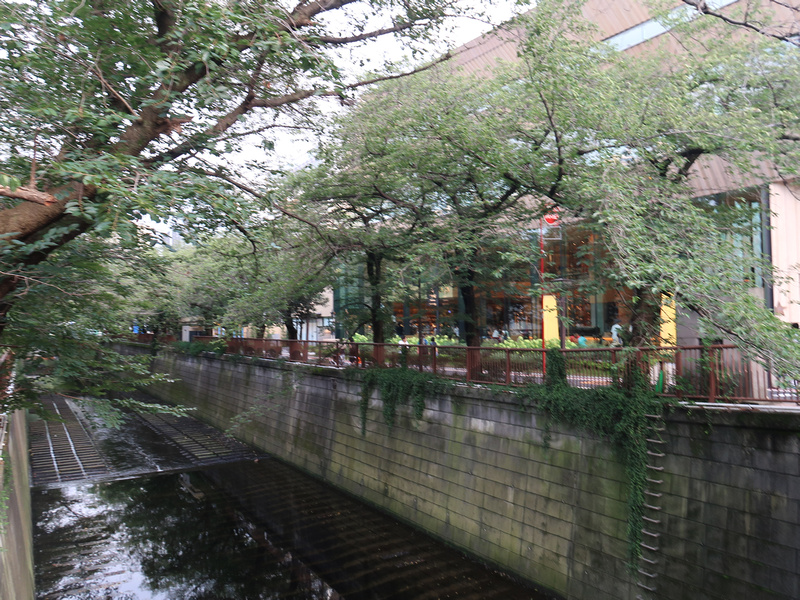 Arriving at The Reserve (as I will now refer to it as) there were people out the front getting their photo taken, as this place has become a tourist destination in itself.

The Reserve isn’t just a regular Starbucks that’s been embiggened. This is a complete coffee experience. 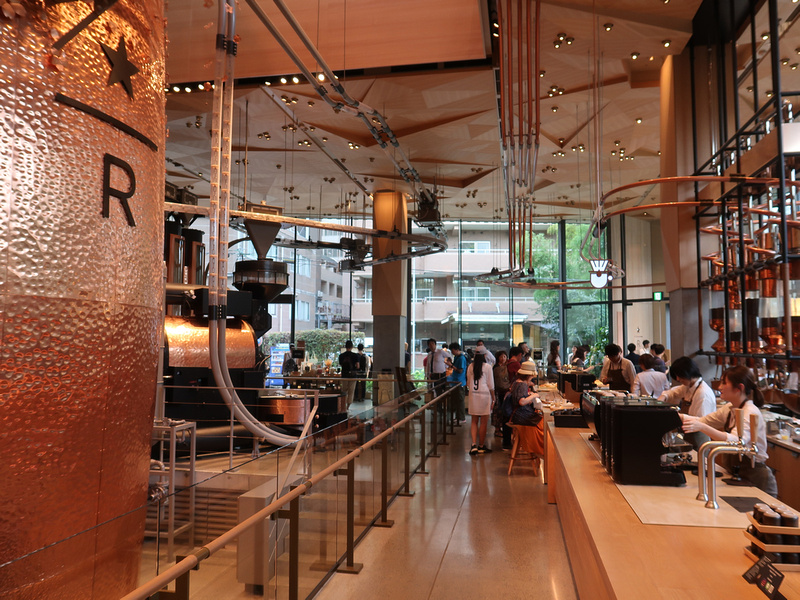 True to its title there is a roastery on site, with beans represented from around the world. If Willy Wonka swapped cacao for coffee and went corporate, this is what his new factory might look like. There are tubes running all over the place shuttling coffee beans. 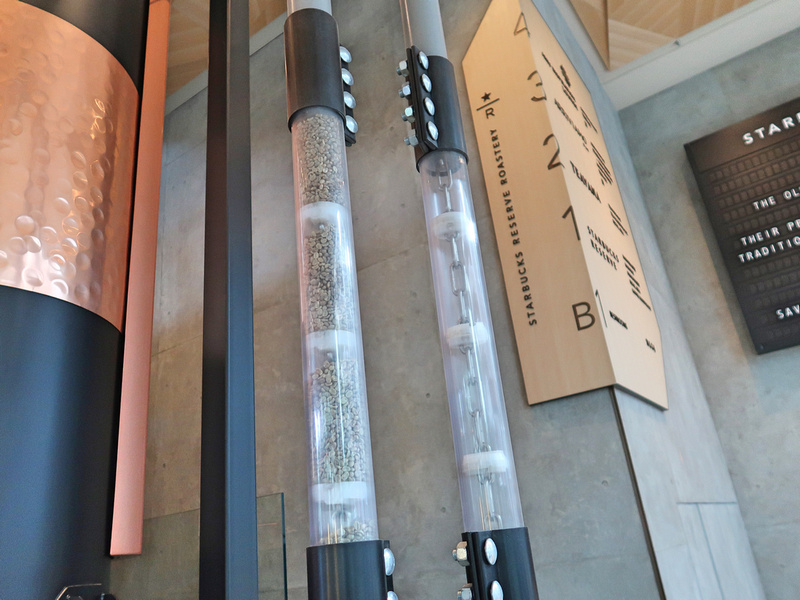 And you can watch the mesmerising process of coffee bags rolling down the production line. You will need time to visit all the floors and see all the design details. Throughout the building I kept hearing a very distinct sound that is pleasing to my travel-worn ears. The sound was of departure flipboards, technically known as a split-flap displays. Melbourne Airport still has a departure flipboards, and that sound is forever associated with the anticipation of going somewhere. Now there will be a new generation of people who will associate this sound with having a coffee. 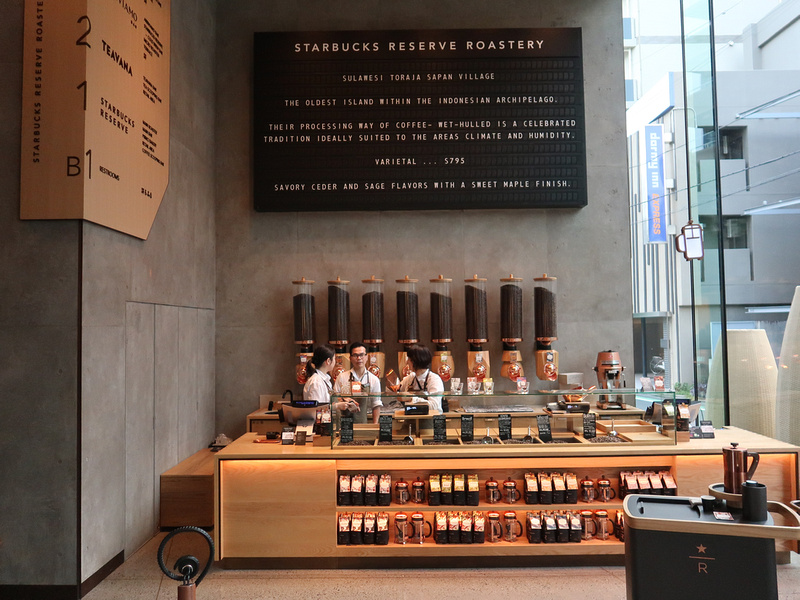 After wandering around the many floors with my jaw half-open it was time to get a coffee. 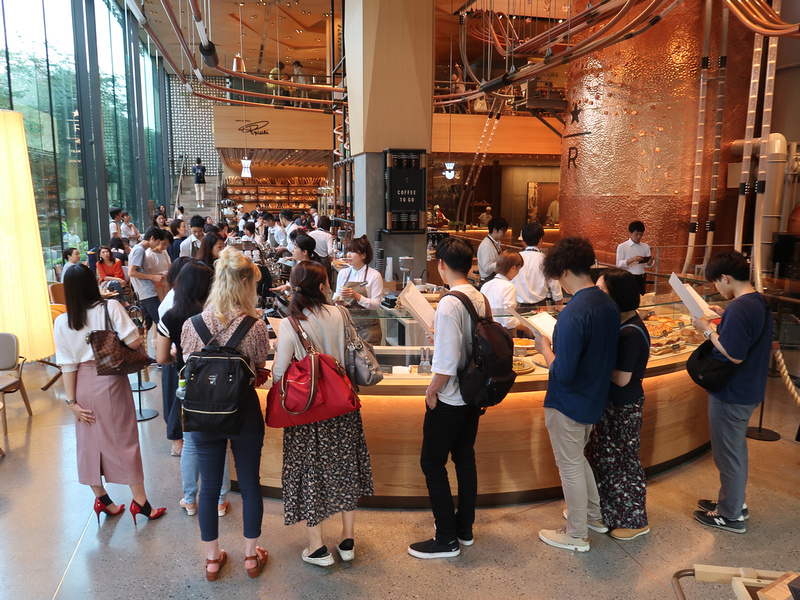 There are a few Starbucks Reserves in Saigon now, but they are just a section in a regular Starbucks. I never go because they are more expensive than the regular coffees, and I would rather buy an expensive coffee at a hipster cafe. At the Tokyo Reserve there is no regular Starbucks menu, unless there is a secret menu I didn’t know about. 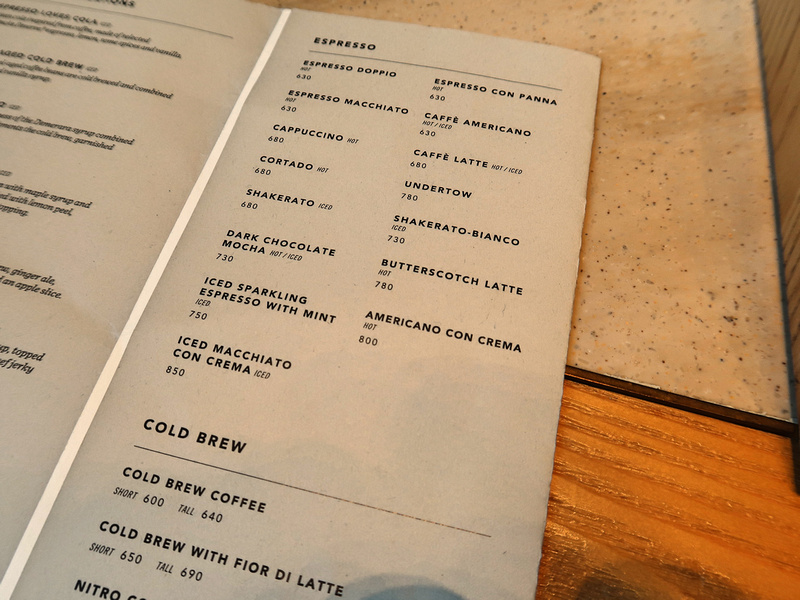 Whenever I go to a new cafe I get a cafe latte as a unit of measurement to compare with all other cafes, so I got the cafe latte here. There is a separate bar dedicated to cold brew coffee that looked tempting, but I am stuck in my ways with espresso-based milk coffee. 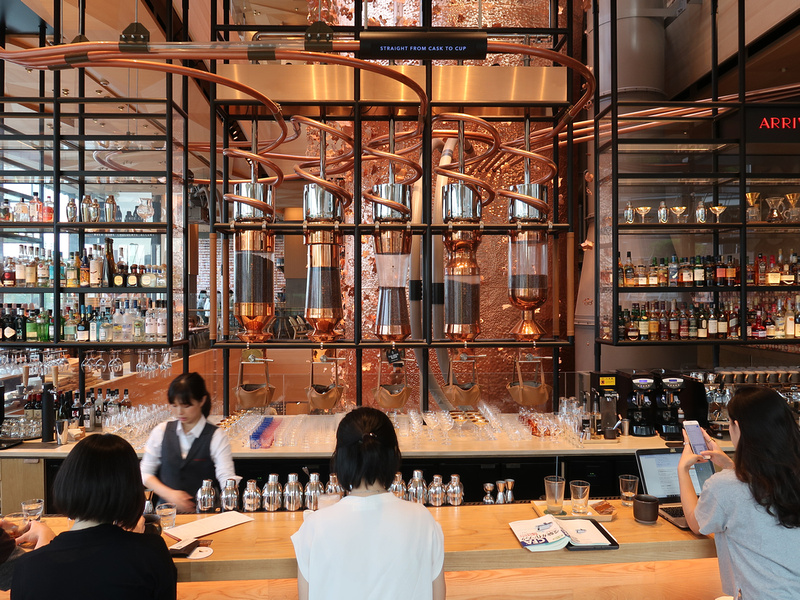 The price was 734 JPY ($6.80 USD). I paid on my Australian debit card that charges no fees, so I was able to see what the converted rate was: 9.74 AUD for a cafe latte! By comparison a cafe latte in Melbourne is about $3.50 to $4.00 AUD per cup. With the weakening Australia dollar it’s probably cracked 10 dollars by now.

The coffee was much better than a regular Starbucks latte, mainly because Starbucks give you such giant cups that the coffee/milk ratio is never right. Here the cup size was right, and it had a stronger coffee flavour. I would have preferred a glass cup though so you can see the colour of the coffee. And the presentation is also a different experience than your regular Starbucks, which is just as important when you have followers to feed. 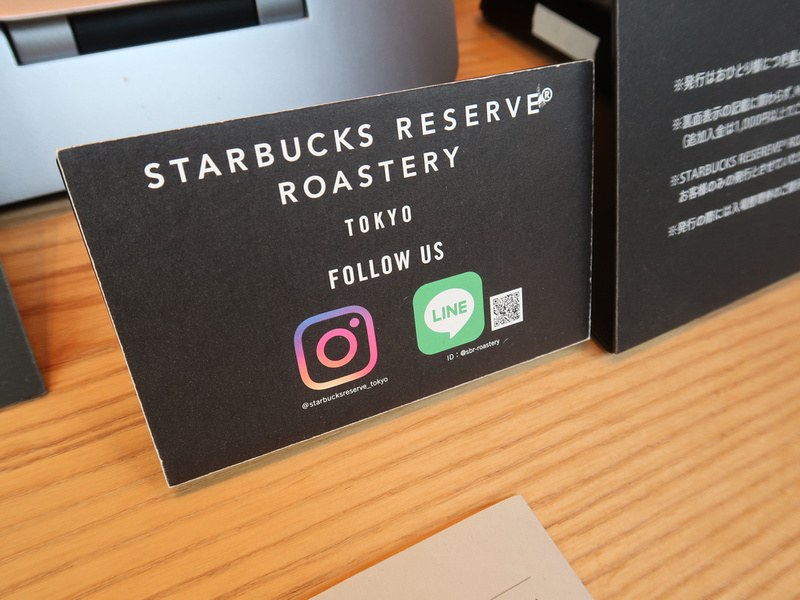 I can’t really tell you much more about the coffee though. Some people think that I’m a coffee snob given the amount of time that I spend in cafes, but my palate is not refined enough to be able to distinguish the subtleties of different coffee flavours. I also do not have a broad enough vocabulary to be able to write about the many tastes of coffee. I tip my hat to the food and beverage writers of the world who don’t run out of superlatives for their subject. I could not tell you what notes and accents were in my coffee. If coffee isn’t your thing there is a level serving tea under the Teavana brand. 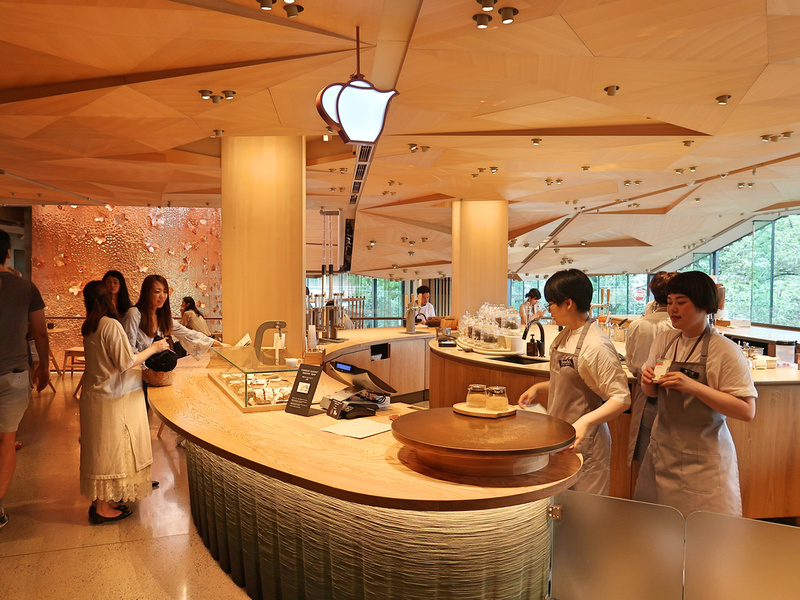 There is also an in-house bakery, and you can watch the process of fresh bread and pastries being made. Usually every Starbucks looks like every other Starbucks, which makes The Reserve even more unusual. It is worth going just to see the interior design by Japanese architect Kengo Kuma. 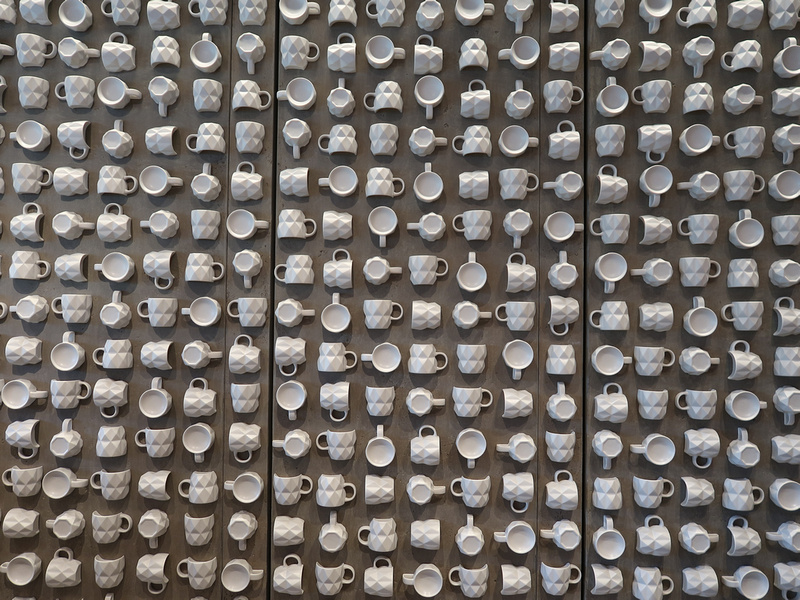 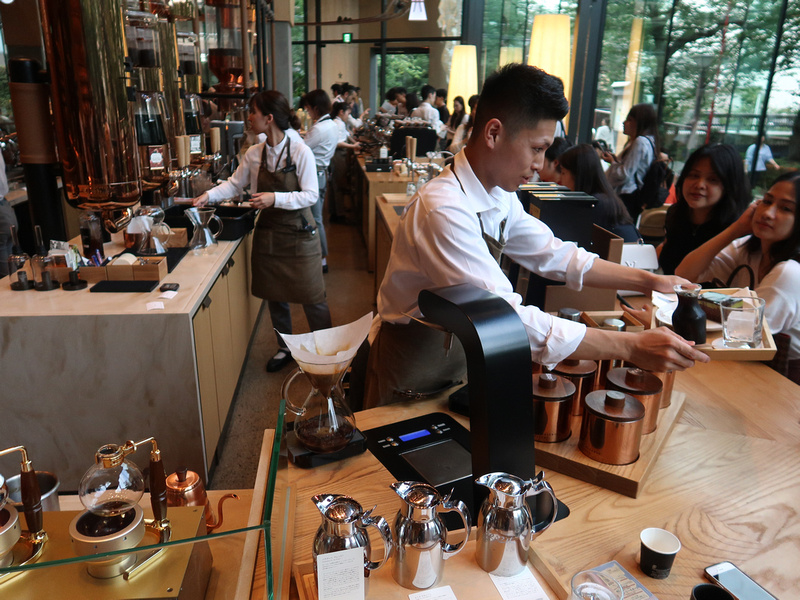 Overall it was fun to visit such a coffee concept store. even if you don’t like coffee the building is worth a visit. It’s somewhere you would go as an experience rather than to get your daily cup of joe. With my 3-to-4-cup-a-day coffee habit I would be up for nearly $1000 AUD a month. After experiencing The Reserve I was content to go back to my cheap but good coffee from Japanese 7-Eleven’s. The convenience stores of Japan are on another level, so I will have to write about those another time.